On November 2, 2020, with Resolution 15,339 the Little Rock Board of Directors' expressed their intent to zone the City’s remaining un-zoned extra territorial jurisdiction lands. The extra territorial jurisdiction lands subject to this effort total approximately 35 square miles (22,178 acres), extending west from the eastern most limits of the City near the Arkansas River, west to the limits of the City at the County line (Saline).

The Future Land Use Map is a prerequisite to zoning, before the City begins the effort of zoning land within the ETJ, best planning practices require a review of the existing Future Land Use Map, determining if there are areas where an amendment to the map may be warranted to recognize existing operations or anticipated growth.  Over the last quarter, Planning has reviewed maps and aerials of the ETJ, explored the area both in the car and on foot, met with Pulaski County Planning, and stakeholders within the impacted ETJ.

Staff has identified areas of the Future Land Use Map, where amendments may be appropriate and wants to receive additional input from the Community on the proposed amendments and help identifying other areas where a discussion on the future land use is warranted.

What is the Future Land Use Map?

Where are amendments to the Future Land Use Map Proposed?

After review of the adopted Land Use Plan Map, staff generated several potential changes to the Land Use Plan Map.  The Adopted Plan Map and potential changes were shared with property owners and residents of the area in May 2022.  Two public meetings were held as well as the development of this page.  Comments have been received with suggested changes as a result of this public interaction.  A set of possible changes based on both Staff analysis and comments/suggestions from area property owners/residents has now been developed. Please review the maps below and send any additional comments by August 19, 2022. 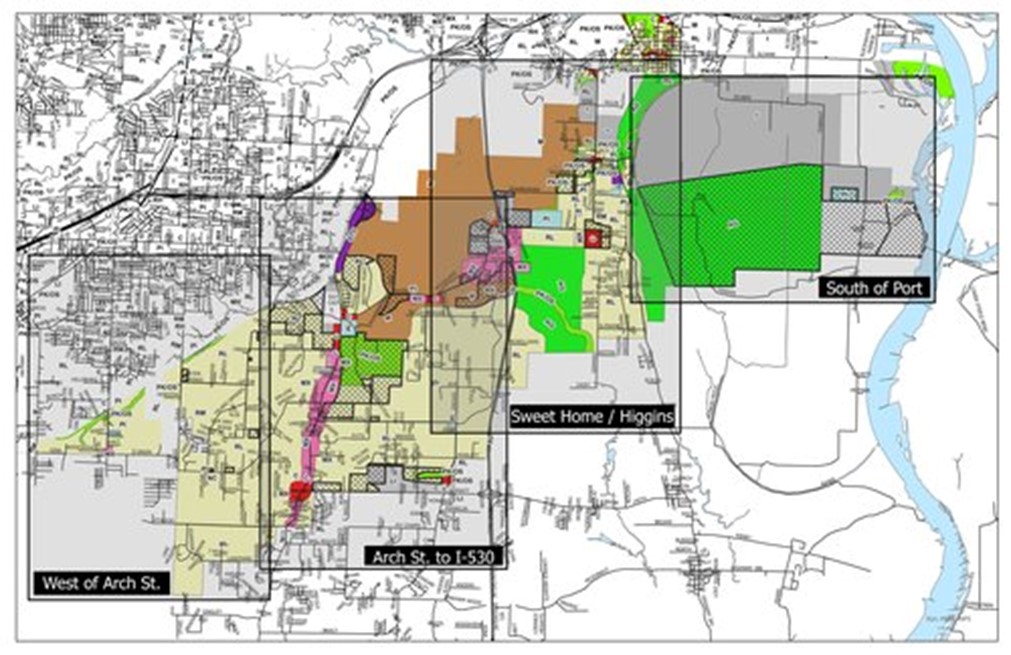 Links for Land Use Maps with potential modifications going to the Little ROck Planning Commission at their October 13th Hearing.  For those wishing to attend the public hearing.  The meeting starts at 4 P.M. at the Centre at University Park, 6401 West 12th Street, Little Rock Arkansas 72204. (Future Land Use definitions)

If you have comments regarding the proposed amendments to the Future Land Use Map in the southeast ETJ, and ultimately provide zoning in the area, please use the comment form (below) on or before August 19, 2022.  When leaving a comment about a specific property, give a location description, Parcel Tax ID Number and/or the subject property's street address.  We wish to thank you for your time and consideration.

1. Will an amendment to the Future Land Use Map affect my property taxes?

This will have no effect on property taxes, sales tax, utility franchise tax, or any other type of tax.

2. What is the difference between the Future Land Use Map and the Zoning Map?

3. Does this mean my property is about to be annexed?

No, this is about moving forward with zoning the lands and providing some regulations on land uses near and adjacent to the City, this project is not about annexation.

4. When will the City begin the process of zoning properties within the ETJ?

The City is planning to begin the task of zoning land in the ETJ shortly after the effort to amend the ETJ Future Land Use Map is approved by the Board of Directors.  It is anticipated after the Board comes to consensus on proposed amendments, Staff will begin holding public meetings to work with residents through the zoning process.

Act 186 of the Acts of the Arkansas General Assembly of the Year 1957, and all amendments thereto give authority to preserve and promote, in accordance with present and future needs, the public health, safety, and general welfare of the inhabitants of the City of Little Rock, and of the public generally, and to encourage and facilitate the orderly growth and expansion of the municipality.

The City of Little Rock’s 3-mile ETJ jurisdiction from the City’s limits is specifically established with: