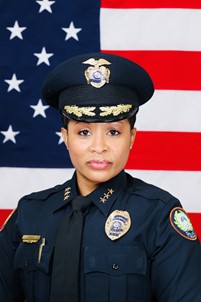 Assistant Chief Crystal Young-Haskins is a fifteen year veteran of the Little Rock Police Department.  She is a native of Central Arkansas and graduate North Pulaski High School in 1999.  She began her law enforcement career with the department in 2006 and has since promoted through the ranks to Assistant Chief of Police serving as Bureau Commander for Field Services Bureau.  She became the second female in the department’s history to hold the rank of assistant chief of police and has made significant strides to champion women in law enforcement throughout the State of Arkansas.  Assistant Chief Young-Haskins has lead in various commander capacities in patrol, administration, and investigations for the past seven years.  She successfully led several units awarded with Unit Commendations and the coveted Overall Crime Reduction Award in 2019 for performance.

She holds a Master of Education (M.Ed.) in Adult Education and Bachelor of Science in Criminal Justice (B.C.J.) with an emphasis on Law Enforcement Administration from Park University (Parkville, Missouri).  She is a graduate of the 2014 International Association of Chiefs of Police Women’s Leadership Institute and the 265th Session FBI National Academy in Quantico, Virginia, where she earned a Graduate Certificate in Law Enforcement Leadership from the University of Virginia (2016).  She has also obtained several law enforcement certifications in Instructor Development, Victim Advocacy, and Forensic Interviewing.  She is a member of the International Association of Chief of Police, National Organization of Black Law Enforcement Executives, and FBI National Academy Alumni Association.

Assistant Chief Young Haskins was selected as a recipient of the 2020 International Association of Chief of Police 40 Under 40 Award.  She is currently enrolled in the Arkansas Certified Public Manager Program with the University of Arkansas at Little Rock.