On October 22nd, 2018 the City of Little Rock completed a pilot streetlight canvass. This pilot project was performed in partnership with the Midtown Neighborhood and the University District and was supported by the Sustainability Commission and City’s Data Governance Committee. The City of Little Rock wants to ensure that all residents feel secure in their neighborhood and a key part of security is having adequate lighting during night time. To ensure that Little Rock streets continue to be well lit the City developed a plan to have volunteers visit every streetlight in a specified neighborhood to determine the number of streetlights that are not lit. Due to existing partnerships the City chose to pilot this project in the Midtown Neighborhood. The Midtown neighborhood boundaries are as follows:

The Sustainability Commission created walking routes that covered every street within the neighborhood boundaries. Nine (9) routes that averaged 1.5 miles were created. The route maps showed star icons indicating the approximate location of all the streetlights along that route.

Fig. 1. Example of route maps provided on the canvassing day.

The initial canvass was performed on October 22nd, 2018 at 7 p.m. and began at the LRSD Adult Education Center on Madison St. The following information was recorded along each route: 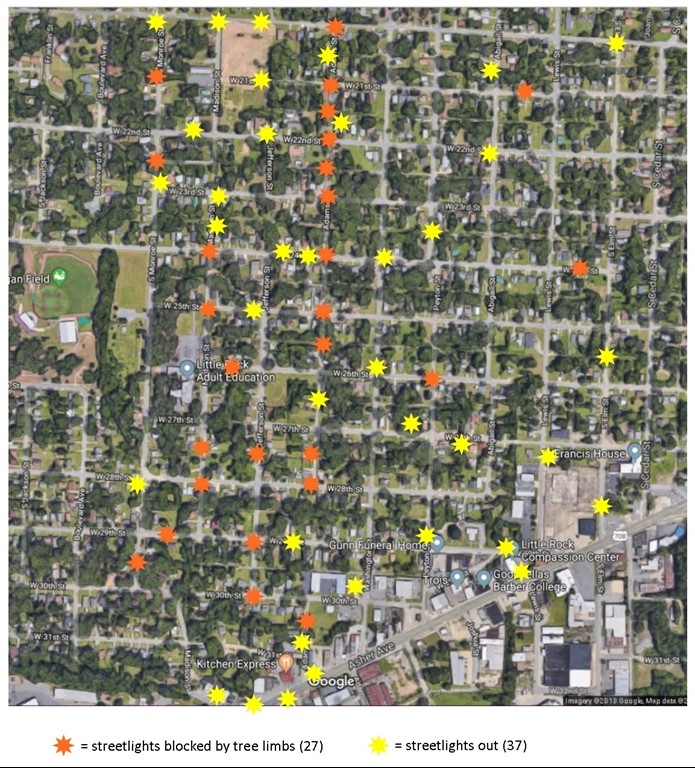 Due to the color differences between streetlights in this neighborhood it was difficult to determine if a street light appeared dim. Therefore only one streetlight was recorded as “dim.”

9% of street lights in the Midtown Neighborhood were reported as blocked by tree limbs. Most of this overgrowth occurs in or near alleys where streets are more narrow and there is less space between trees and utility poles.

Questions about this project?