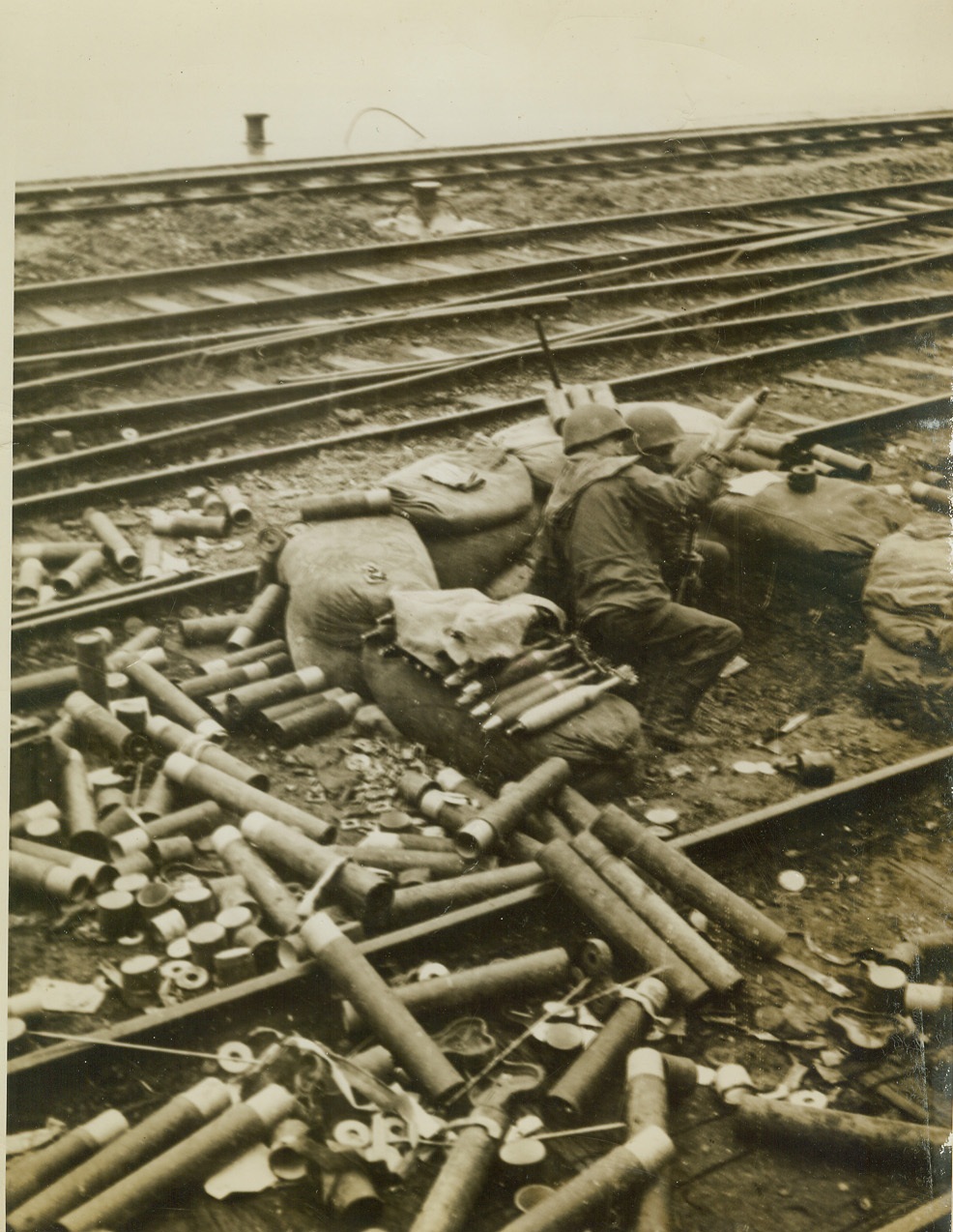 TANKS BOMBARD RHINE CITY, 12/27/1944. FRANCE – A mortar crew of the U.S. 7th Army fired shells at the German city of Kehl, across the Rhine River from their hastily-erected sandbag position in the Strasbourg railway yards. The Germans had destroyed the three bridges spanning the Rhine between the two cities. (Passed by censors.) Credit: ACME; 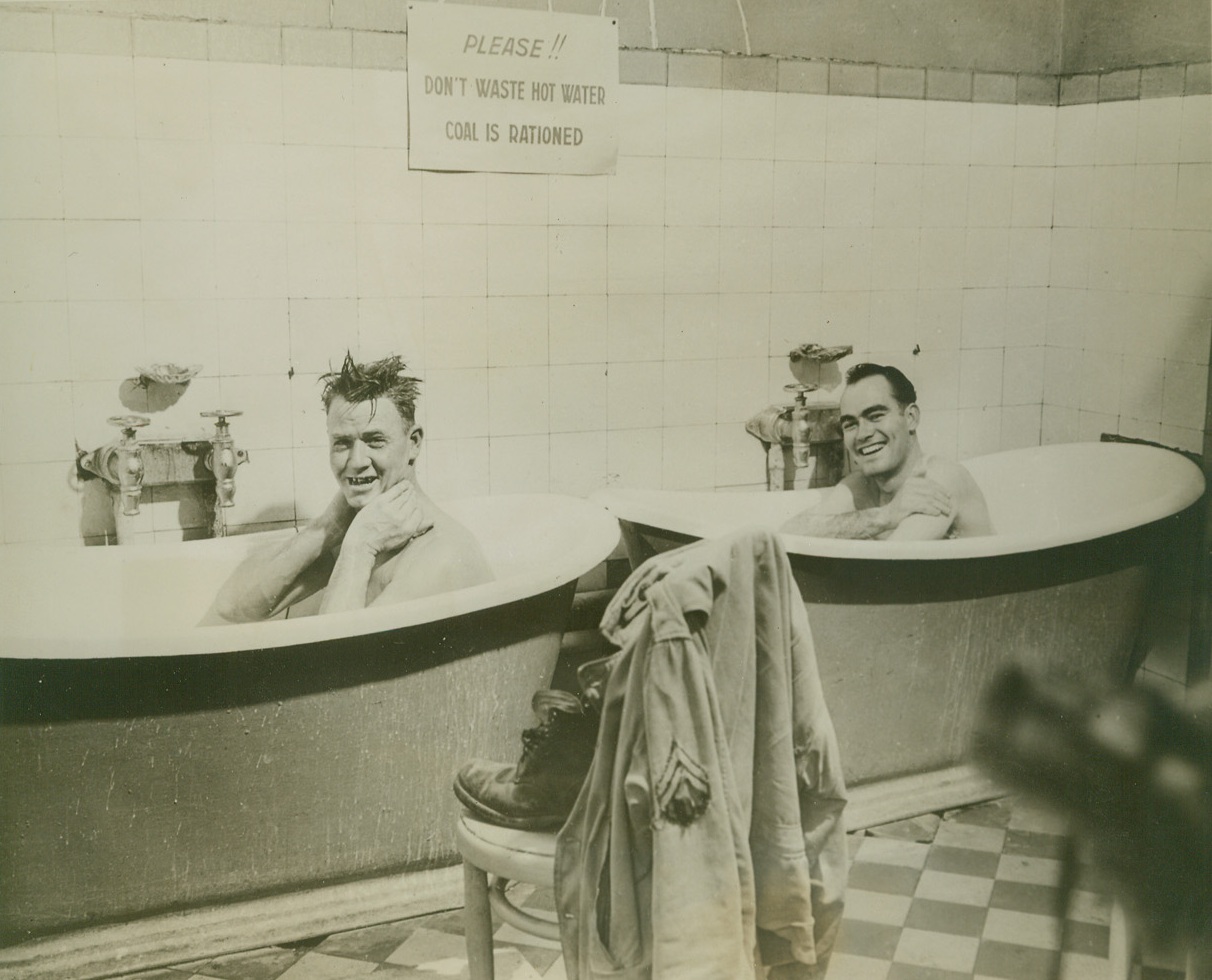 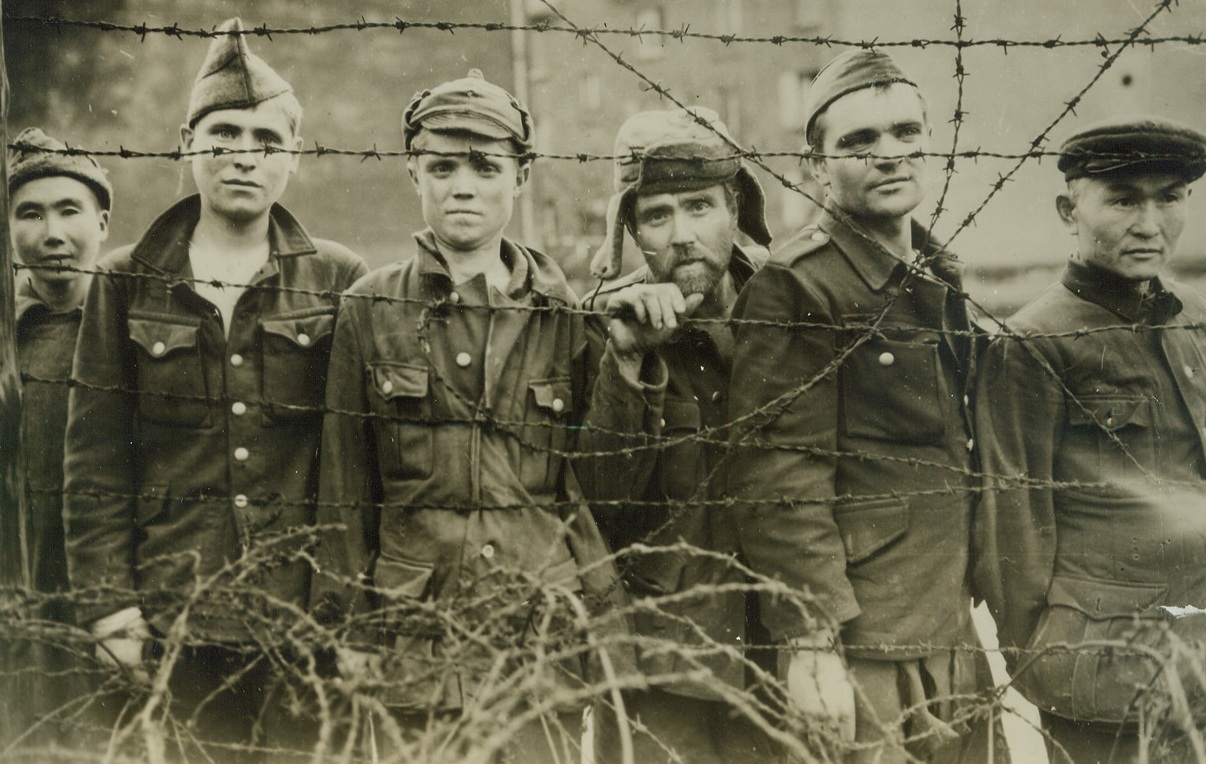 Behind Wires Of A Nazi Camp, 12/20/1945. FRANCE—Prisoners look through a barbed wire fence of the former Nazi prisoner of war camp at Sarpeguemines, France, on the U. S. Third army Front. Yanks captured the camp December 11. Prisoners found there included about 1,000 Russians, Serbians, Italians, poles, and French, some of whom had been in German hands since the Nazis entered Warsaw more than five years ago. Credit WP ACME; 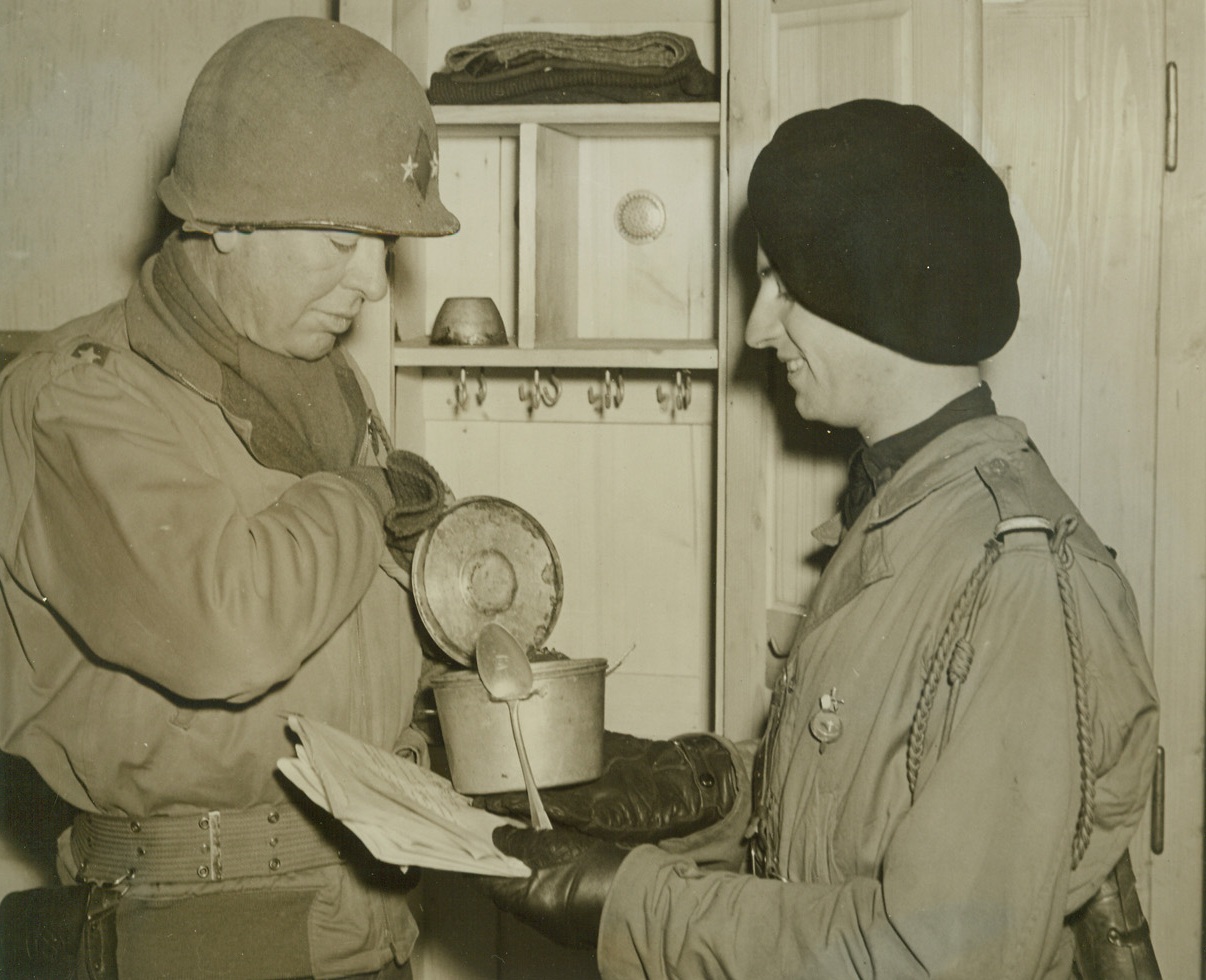 General Made a Private (#2), 12/7/1945. Metz, France—Maj. Gen. S. Leroy Irwin, of Washington, D.C., commanding the U.S. 5th Infantry Division was honored recently by being inducted as honorary “private” in the 30th Battalion. Chasseurs de Pied, better known as the famous “Blue Devils” of the French Army. Troops under Gen. Irwin had played a large part in the liberation of Metz and to mark the occasion, the French regiment elected the general as a member. Here, Lt. Georges Pousard (right) shows Gen. Irwin his locker and mess kit, after his induction in the barrack room at Metz. His locker and one bunk will always remain empty in this room, in the general’s honor, and this French squad will always work with nine men instead of the usual ten. (Also see ACME photos #s 745050-052-053). Photo by Charles Haacker, ACME War Pool photographer. Credit: ACME.; 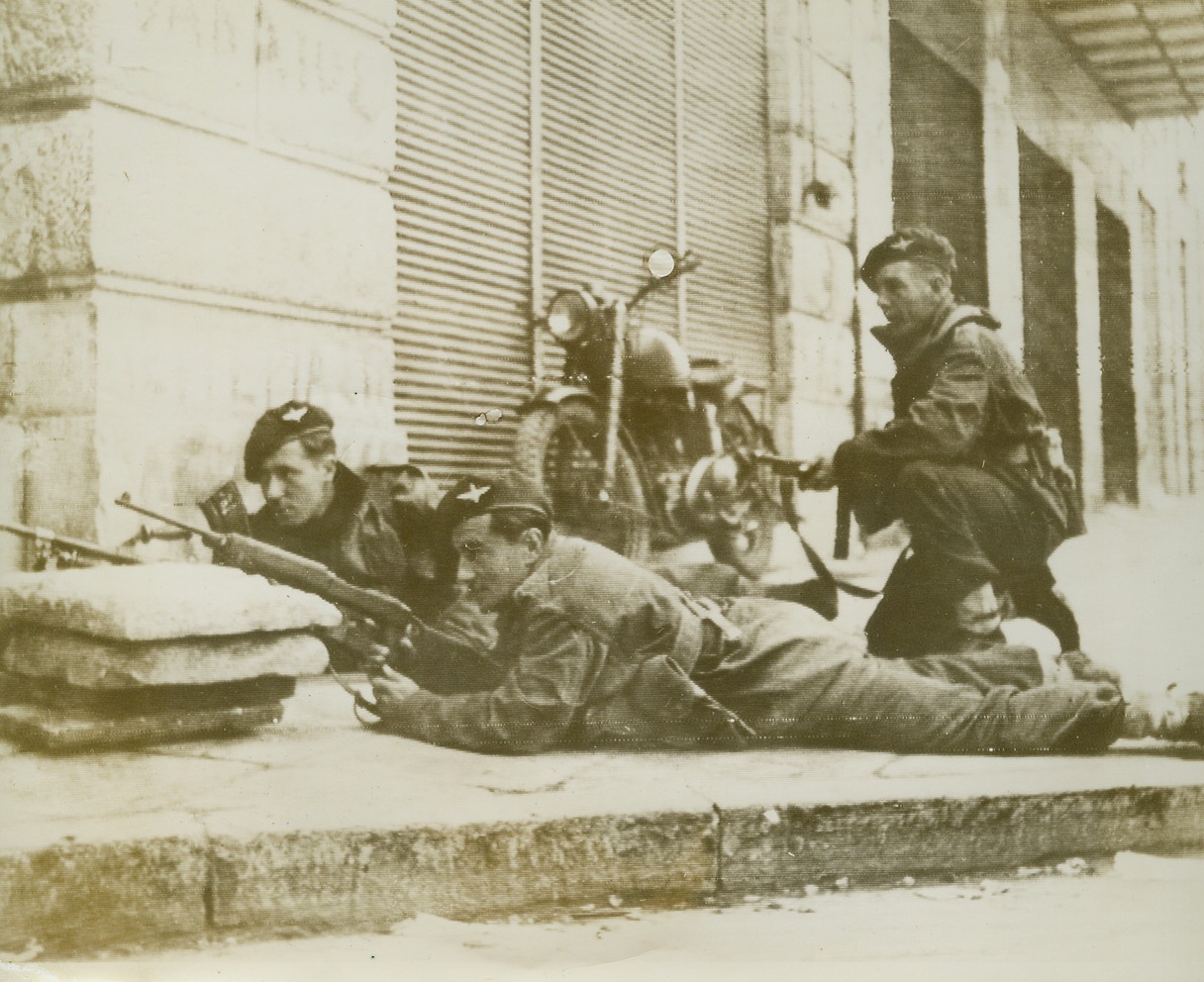 British Troopers Battle Rioters, 12/11/1944. Athens, Greece—Taking their stand behind a paving block barricade, British paratroopers stand guard during the recent riots in Athens. The British forces succeeded in beating back an attempt by the (illegible word) to capture the center of the city yesterday (Dec. 10). Credit: British official photo via OWI from ACME.; 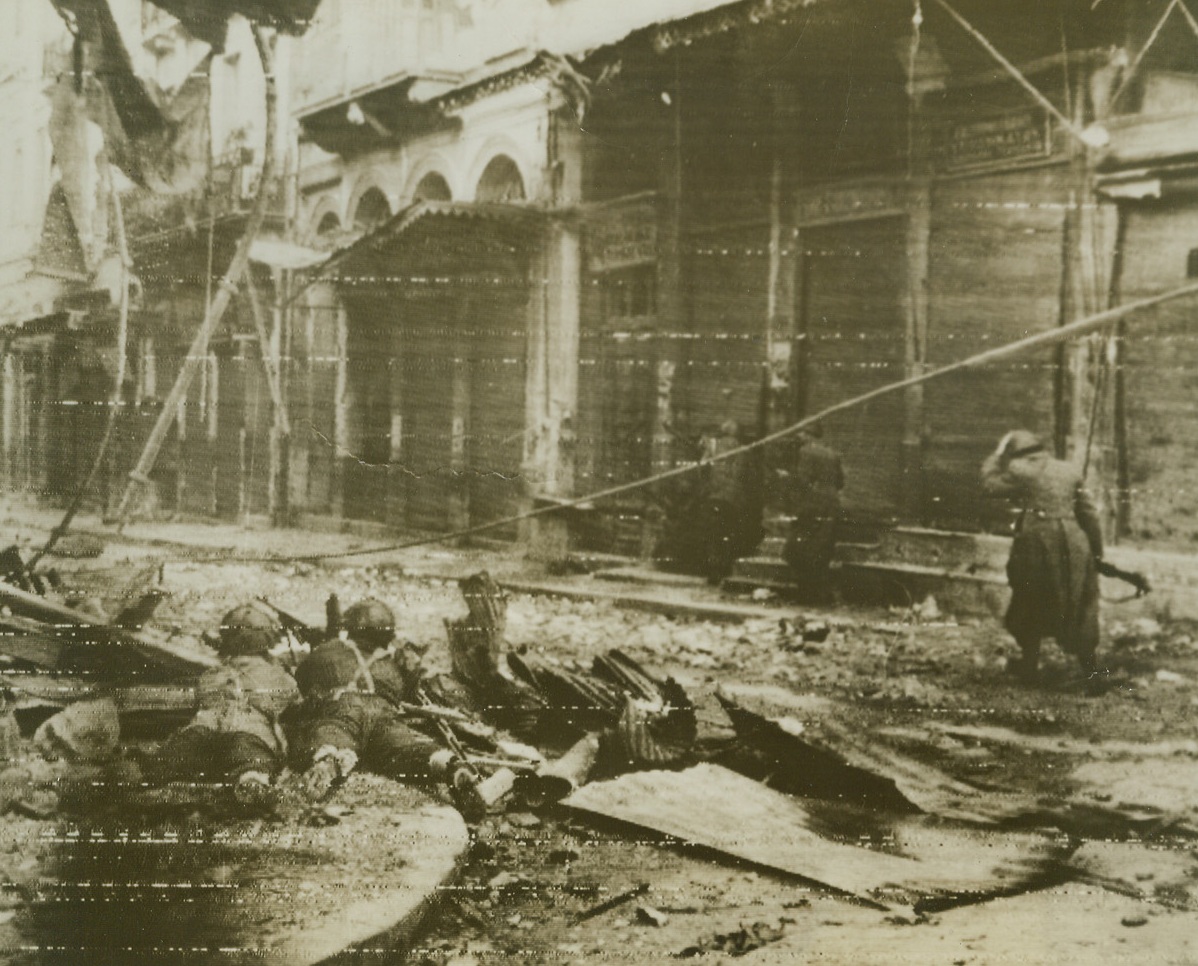 Fight in Streets of Athens, 12/27/1944. GREECE – British paratroopers and Greek policemen advance over shell-torn streets in Athens under constant fire by ELAS forces. This is one of the first pictures from the area showing the extent of damage caused by fighting between British forces and Greek ELAS troops in Athens.Credit (OWI Radiophoto from Acme); 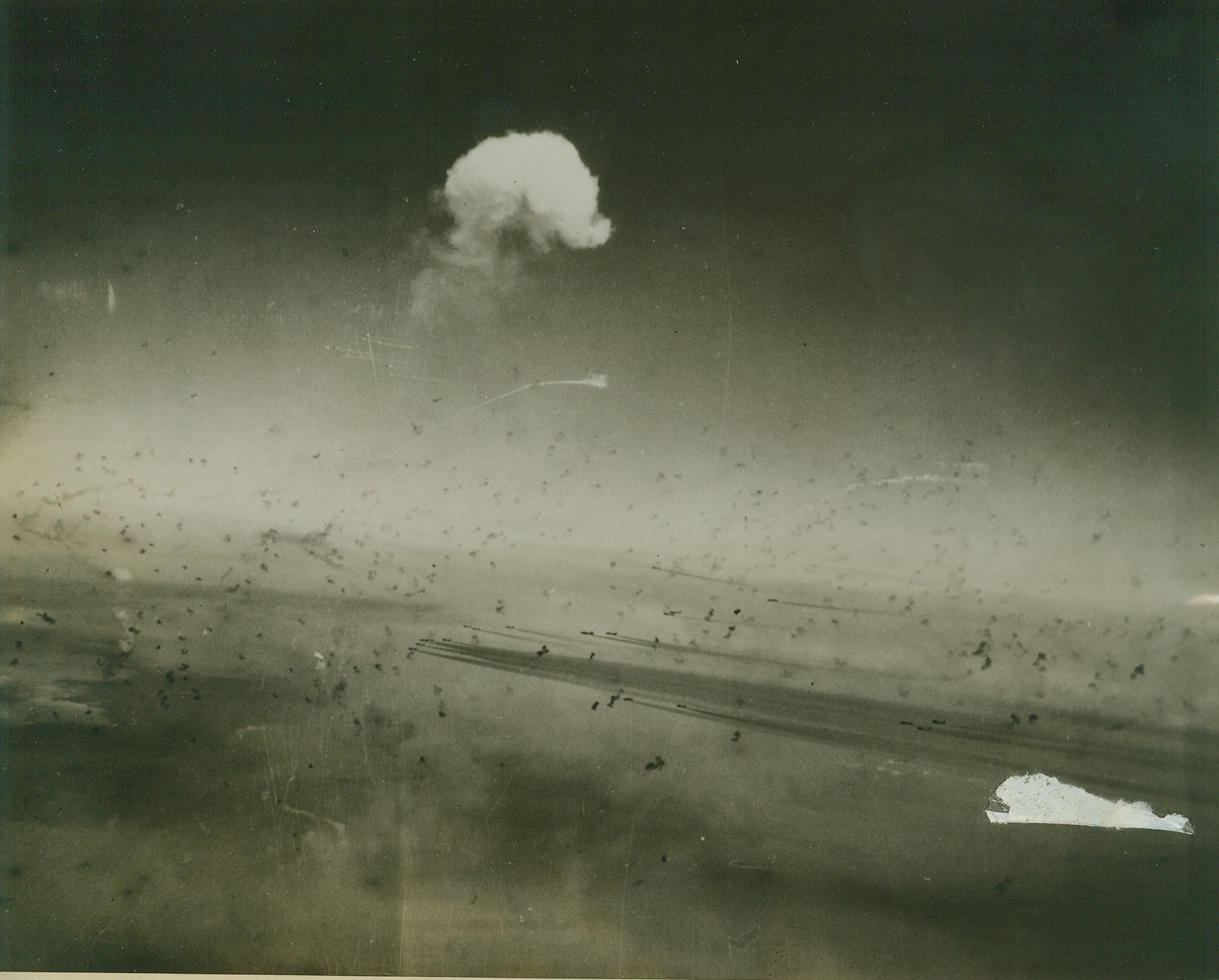 Flak-Filled Skies, 12/7/1944. This remarkable photo taken as U.S. Army 8th Air Force B-17 Flying Fortresses flew over Germany headed for oil targets at Merseberg, shows the huge amount of flak that desperate Nazi anti-aircraft gunners are putting into the skies these days. White clouds (top, center) is all that remains of one Fortress that received a direct hit. The contrails of other planes can be seen below the cloud and across the center of the photo.Credit Line (U.S.A.A.F Photo from Acme); 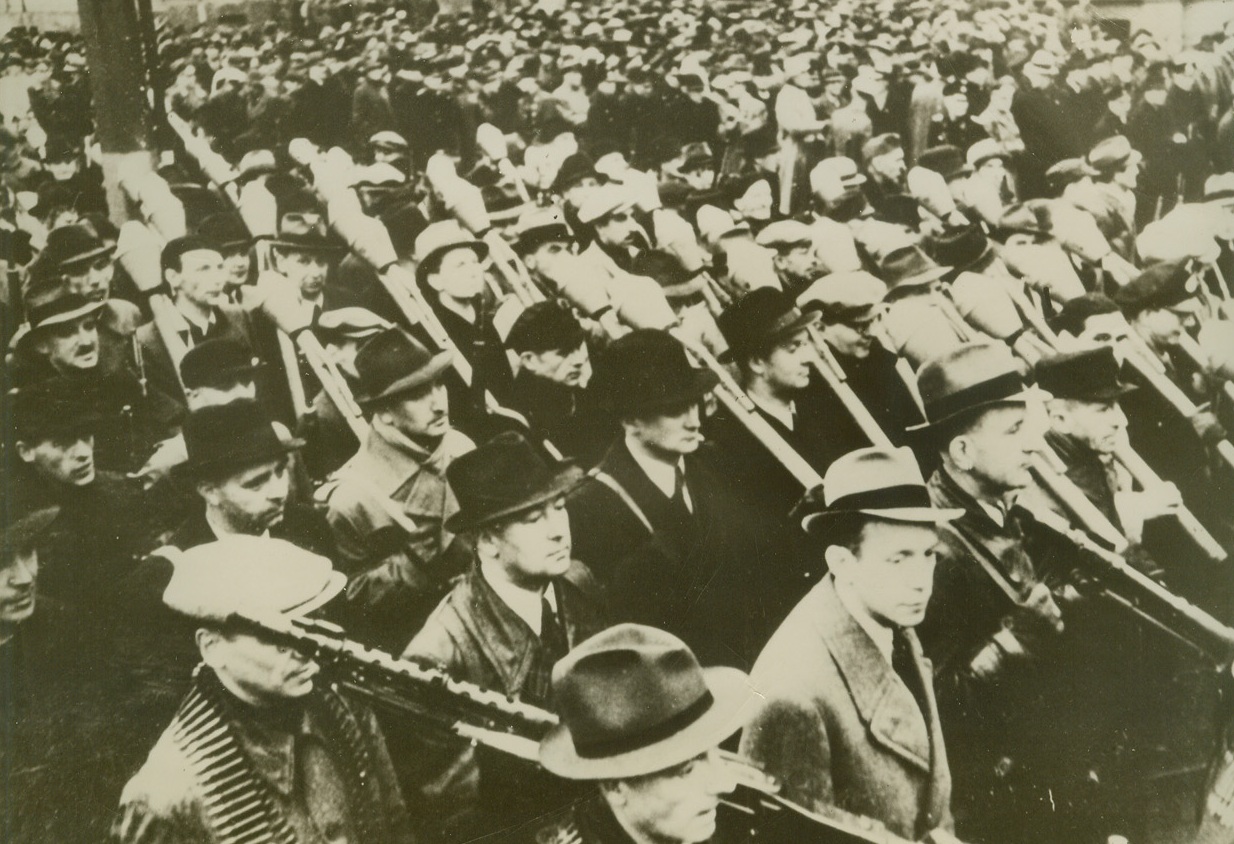 Germany’s Home Guard Exercises, 12/8/1944. GERMANY – Wearing civilian clothing and carrying military weapons, members of the German “Volksturm” (home guard) parade in Berlin as they were ceremoniously sworn in to defend the Fatherland to the death. Dr. Goebbels reviewed the parade. The mace-like weapons carried by some of the “soft hat brigade” are anti-tank rocket projectiles.Credit – WP- (Acme); 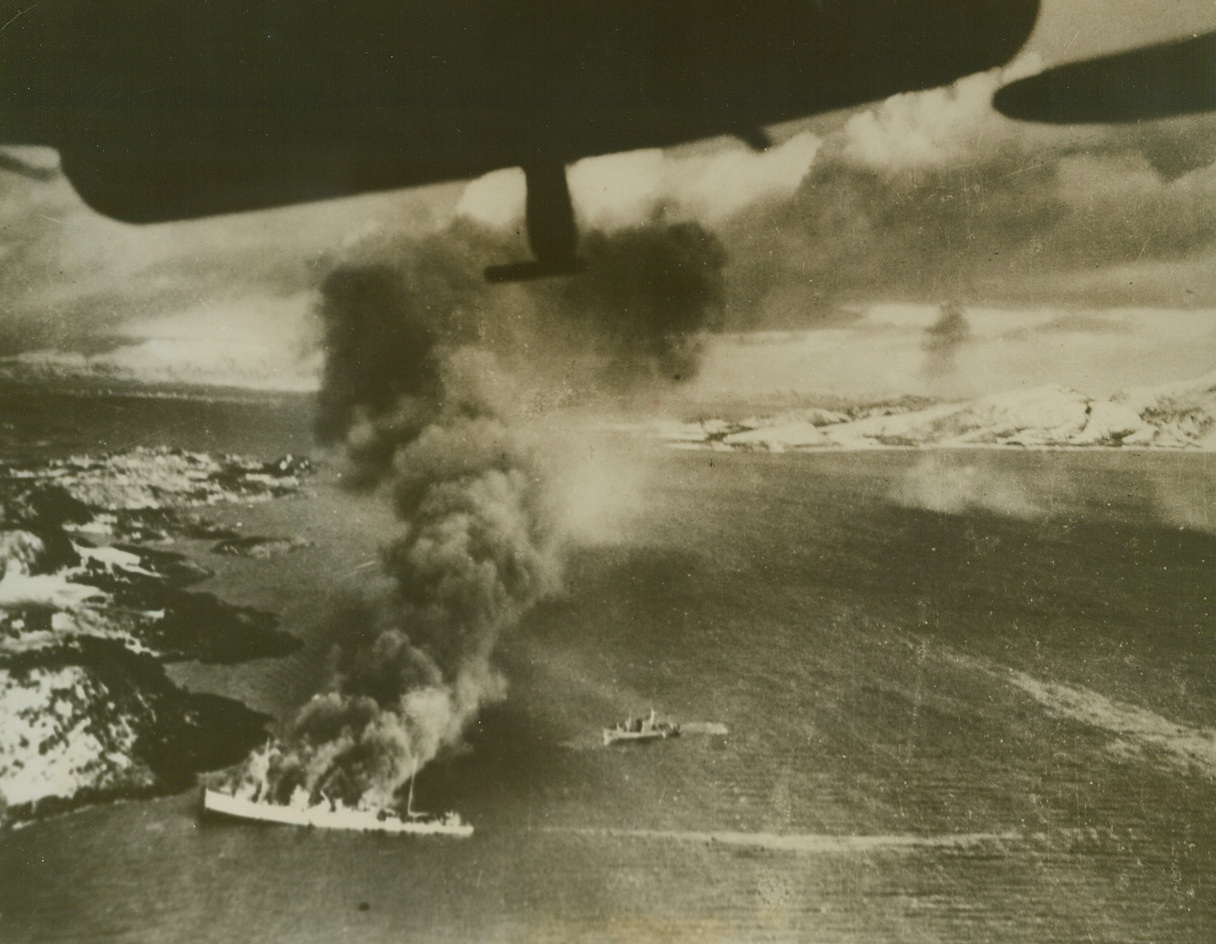 British Blast Nazi Convoy, 12/7/1944. Burning fiercely, a Nazi troop transport (left) is aground and settling by the stern, after an attack by British Fleet Air Arm Barracudas. The transport was part of a convoy of three ships escorted by an armed trawler (above, center background), caught off the coast of Norway between Mosjoen and Rorvik. All four ships were set afire and driven ashore by the attackers. Here, the trawler tires to come alongside the larger craft to rescue survivors. A few moments later it was attacked, itself. Credit Line ( British Official Photo from Acme); 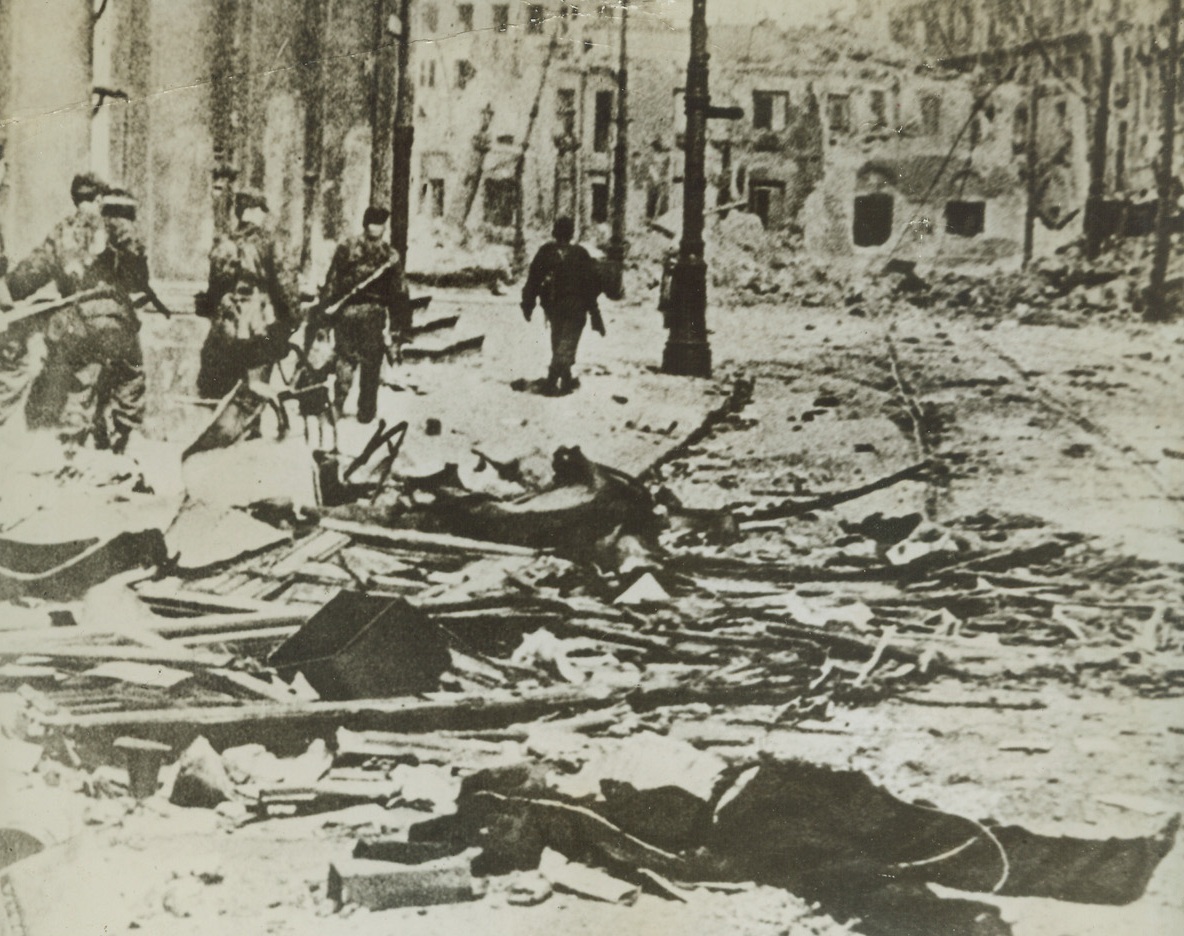 Devastated Poland Still a Battle Field, 12/2/1944. POLAND – A German patrol in the center of Warsaw passes through a street that was the scene of bitter battles by Polish patriots against overwhelming odds. This dramatic new picture from a neutral source shows the full extent of the ruin and tragedy which the premature rising, quelled when the Red Armies were stopped at the gates of the Polish capital, brought upon Warsaw.Credit Line (Acme); 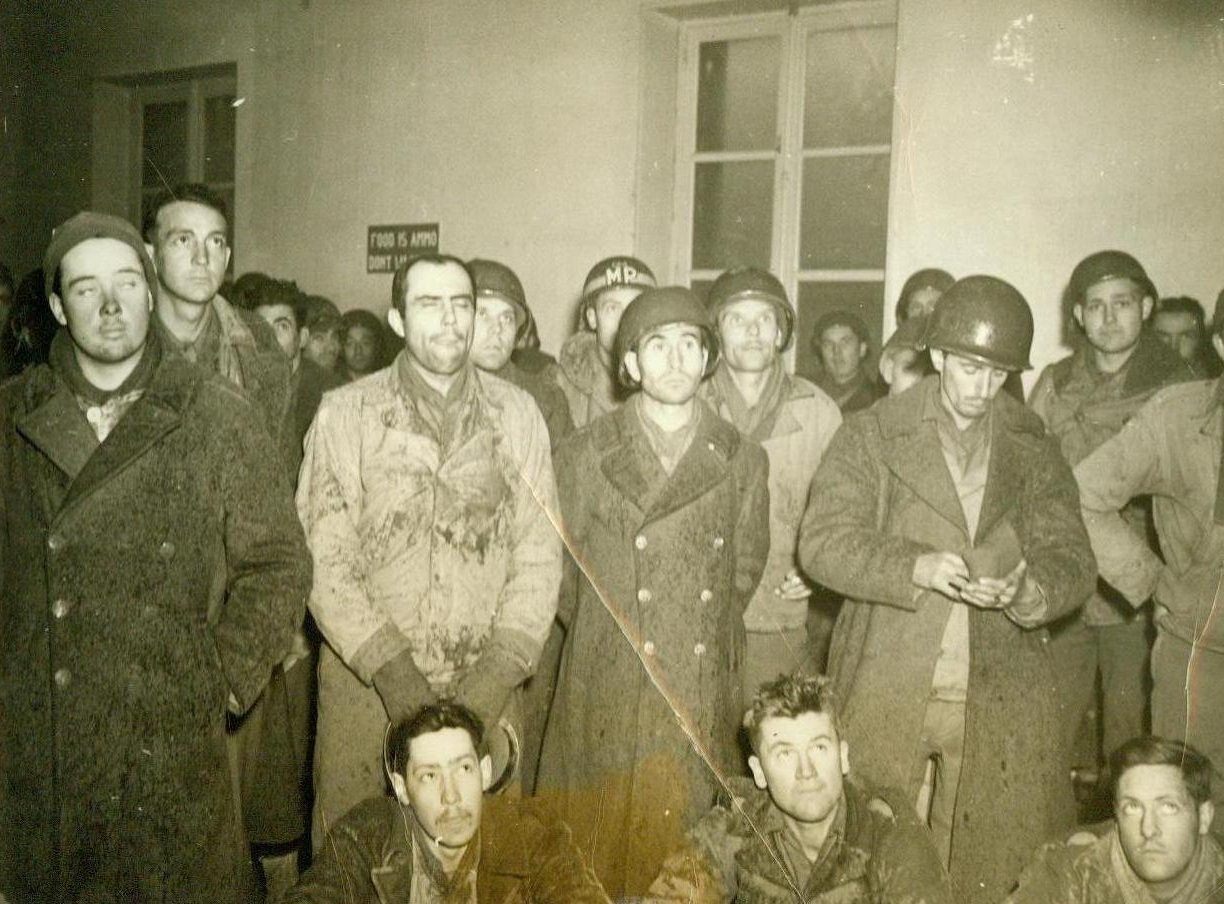 Like “Money From Home”, 12/19/1944. Germany – A study in facial expressions is this photo of men of the U.S. 3rd Army, as they listen to an officer telling them that they have been selected for a 30-day leave. Photo by Charles Haacker, ACME War Pool Photographer 12/19/44 Credit Line (ACME); 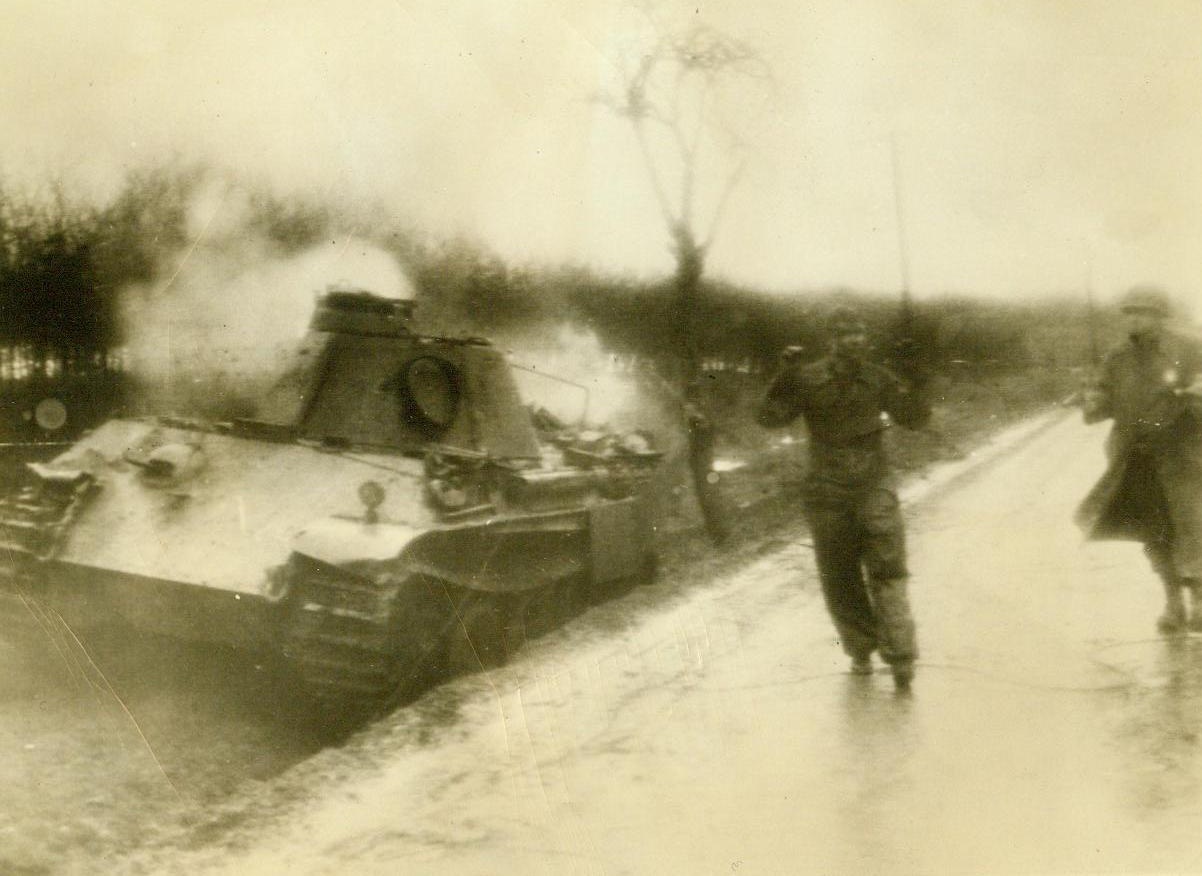 One Nazi Who Won’t Fight, 12/24/1944. Belgium – Sgt. Bernard Cook of Los Angeles, Calif., keeps his pistol pointed at a Nazi Prisoner taken as Germans attempted breakthrough in Belgium. A knocked-out German tank burns on the side of the road. 12/24/44 Credit (Army Radiotelephoto From ACME); 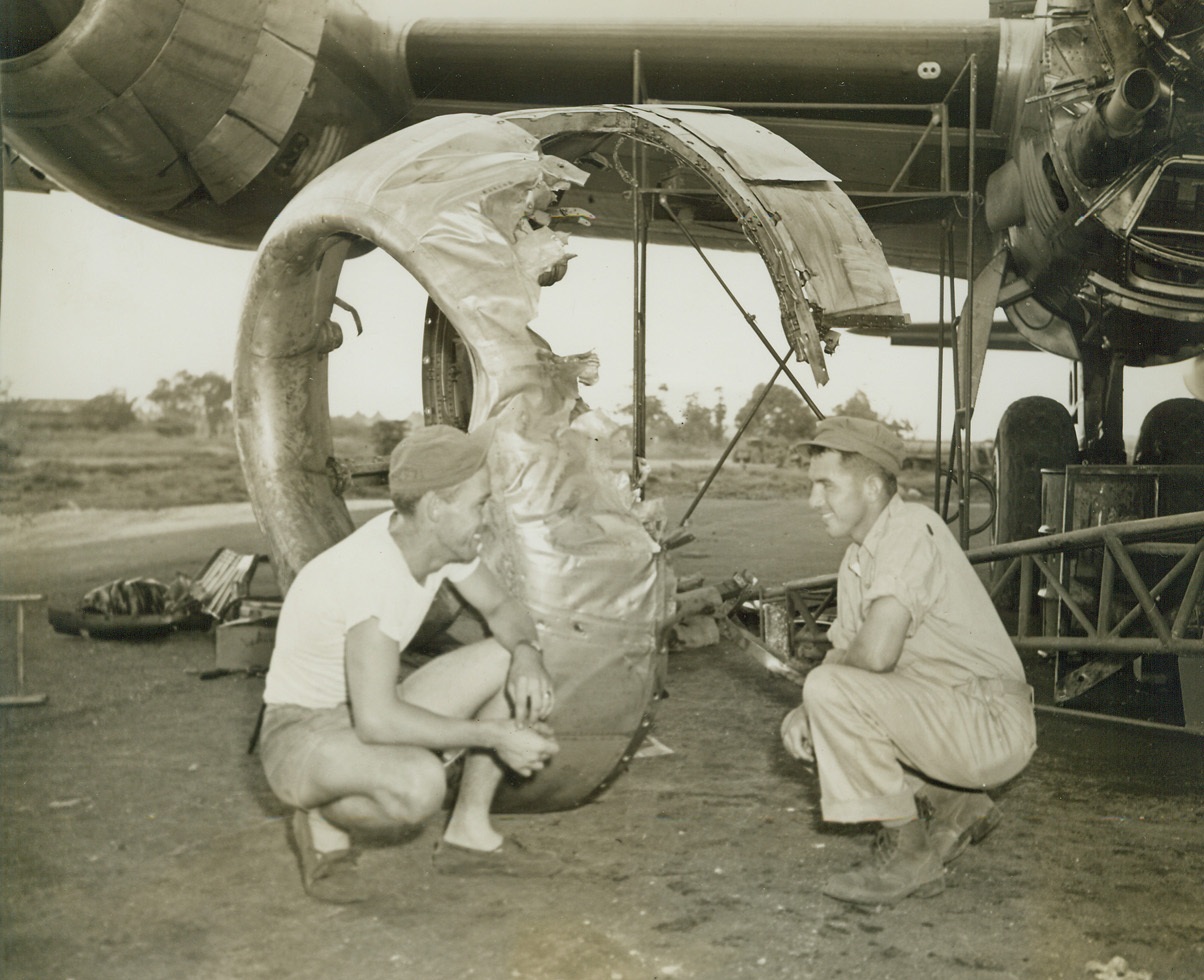 After Jap Plane Rammed Superfort, 12/14/1944. Saipan – Lt. Donald J. Dufford (right), of Grand Junction, Colo., Plane Commander; and Tail Gunner Sgt. R.V. Rainer, Grossbeck, Texas, examine a damaged engine cowling of their B-29 Superfortress, after a Jap Tony Fighter Plane had crashed head-on into the engine on a mission over Japan, Dec. 3. The Nip’s wing was sheared off, it smashed into another Jap and both went down in flames. The Superfort returned to its Saipan base on three engines. Photo by Stanley Troutman, ACME War Pool Photographer. Credit: ACME; 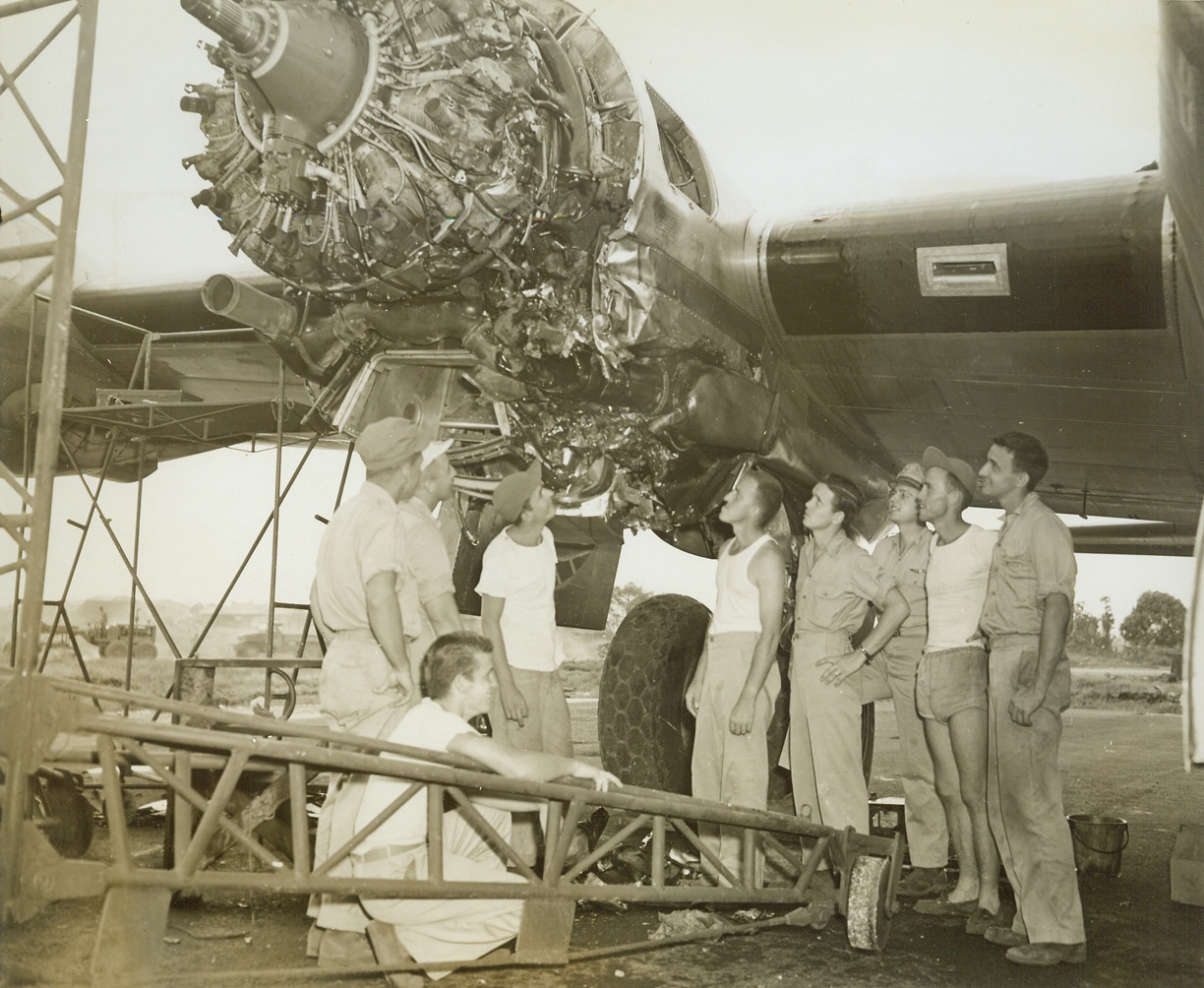 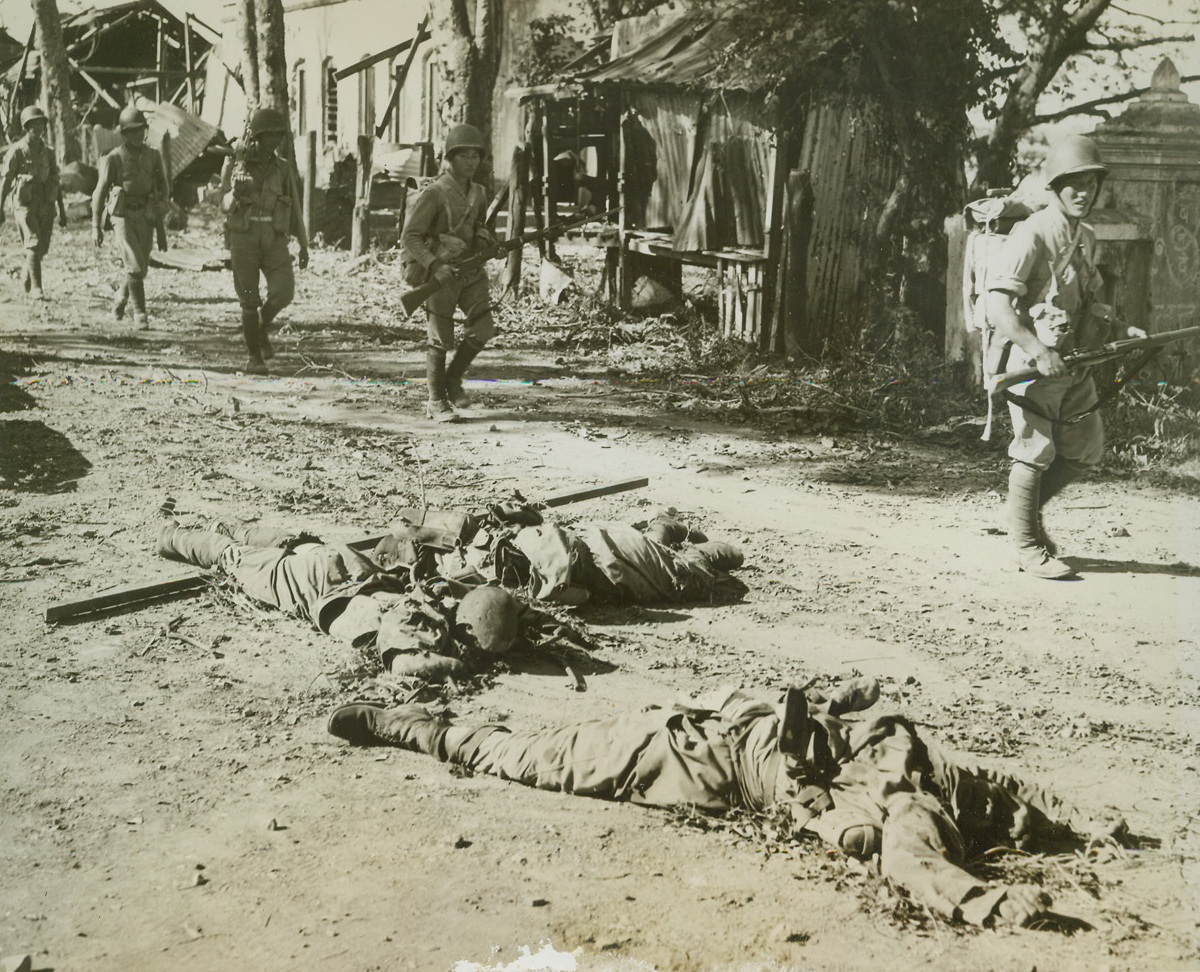 Chinese Wipe Japs Out of Bhamo, 12/30/1944. Bhamo, Burma – It took a month-long battle to wipe enemy forces from strategic Bhamo, one of the last remaining Jap strongholds along the new India-to-China overland supply route. Bhamo fell to American-trained Chinese troops on December 15th, adding a new link in the pipeline and supply road to war-torn China. Here the victors file past the bodies of some hated Japs in the captured city.Credit Line - -WP- -(ACME; 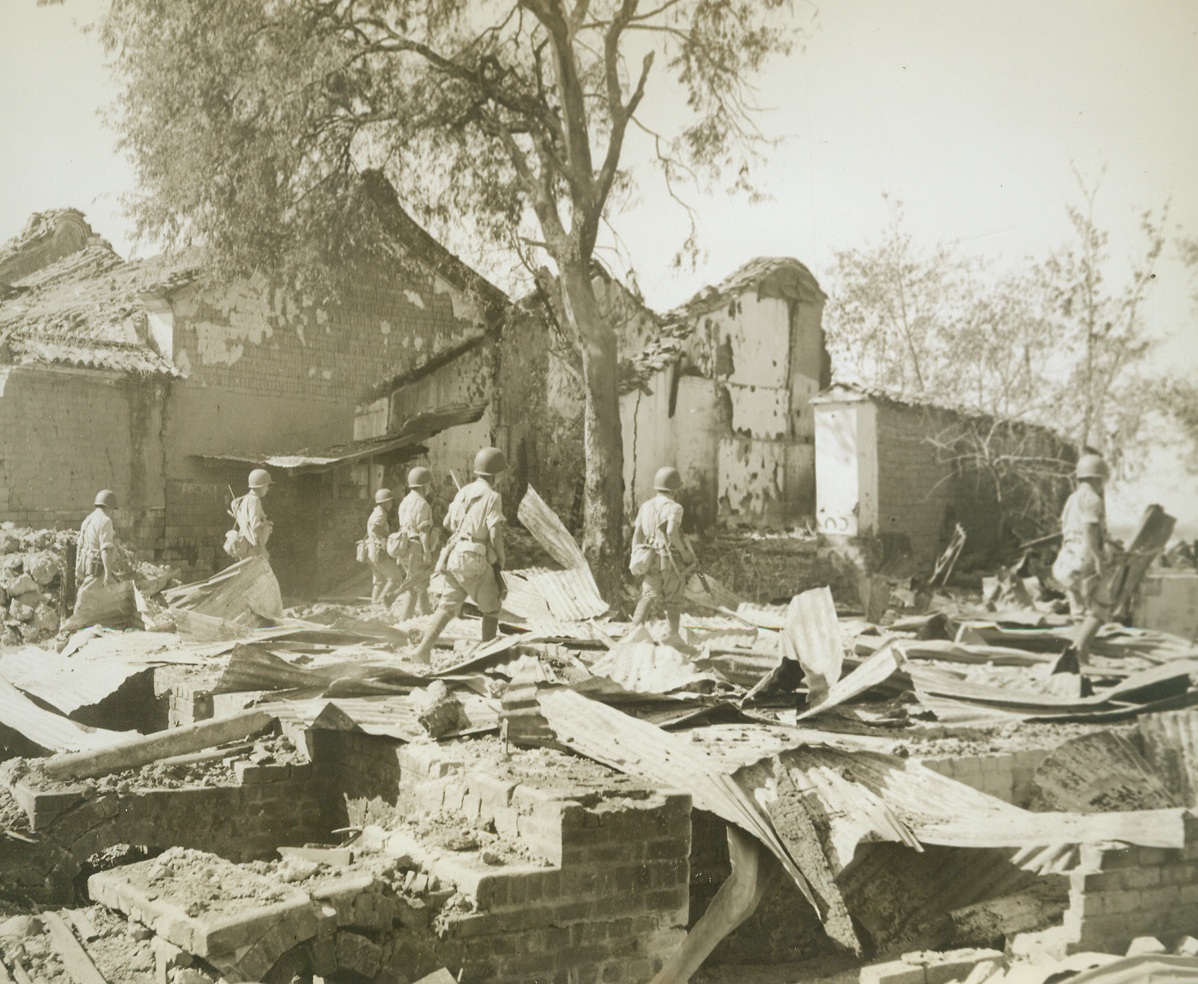 Chinese Mop Up, 12/30/1944. Bhamo, Burma – Victorious after a month-long battle for Bhamo, one of the last remaining Jap strongholds along the new India-to-China overland supply route, American-trained move through the ruins of Bhamo. With the core of Jap resistance broken, they complete mopping up operations in the area. Photo by Frank Cancellare, ACME photographer for the War Picture Pool. Credit line –WP—(ACME); 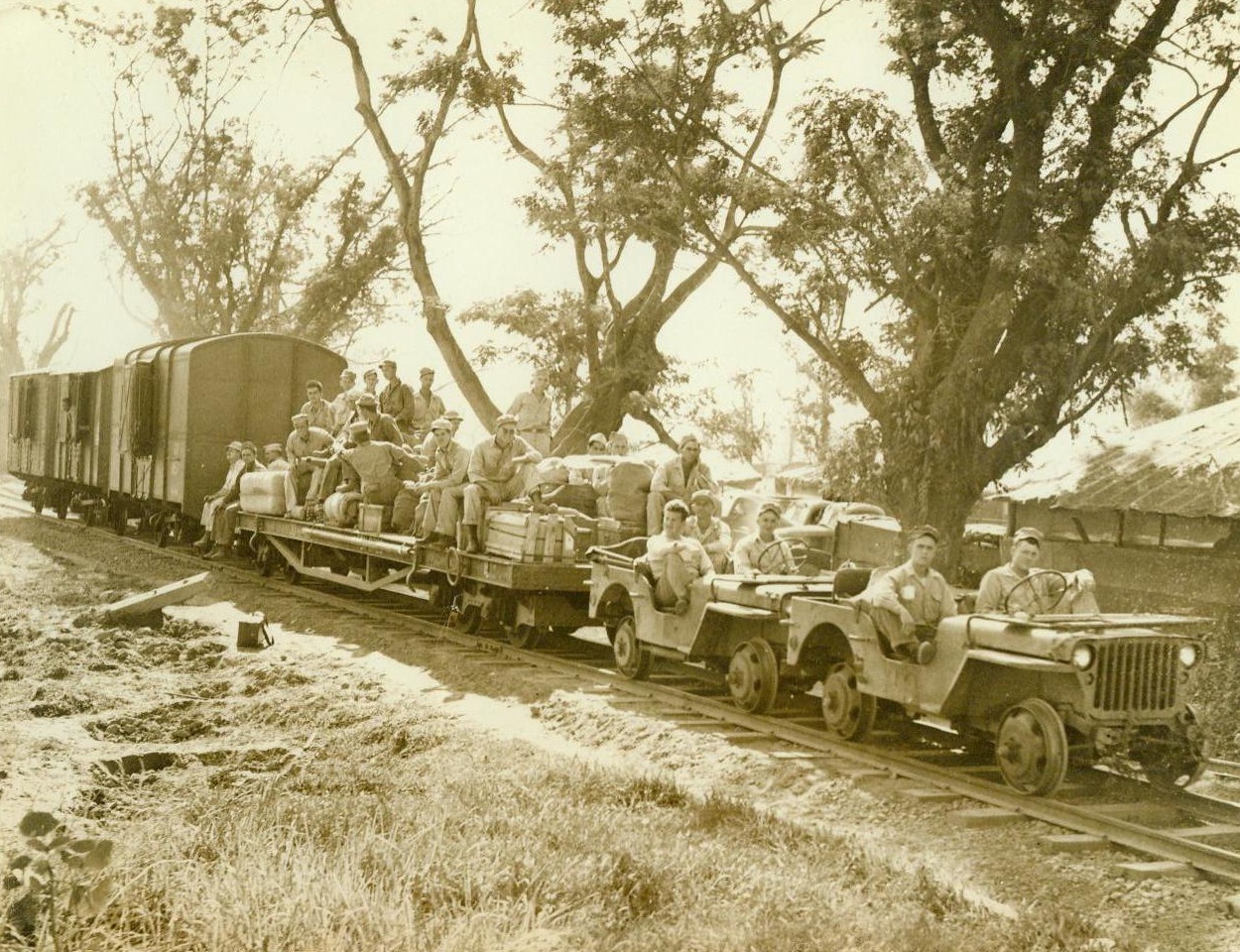 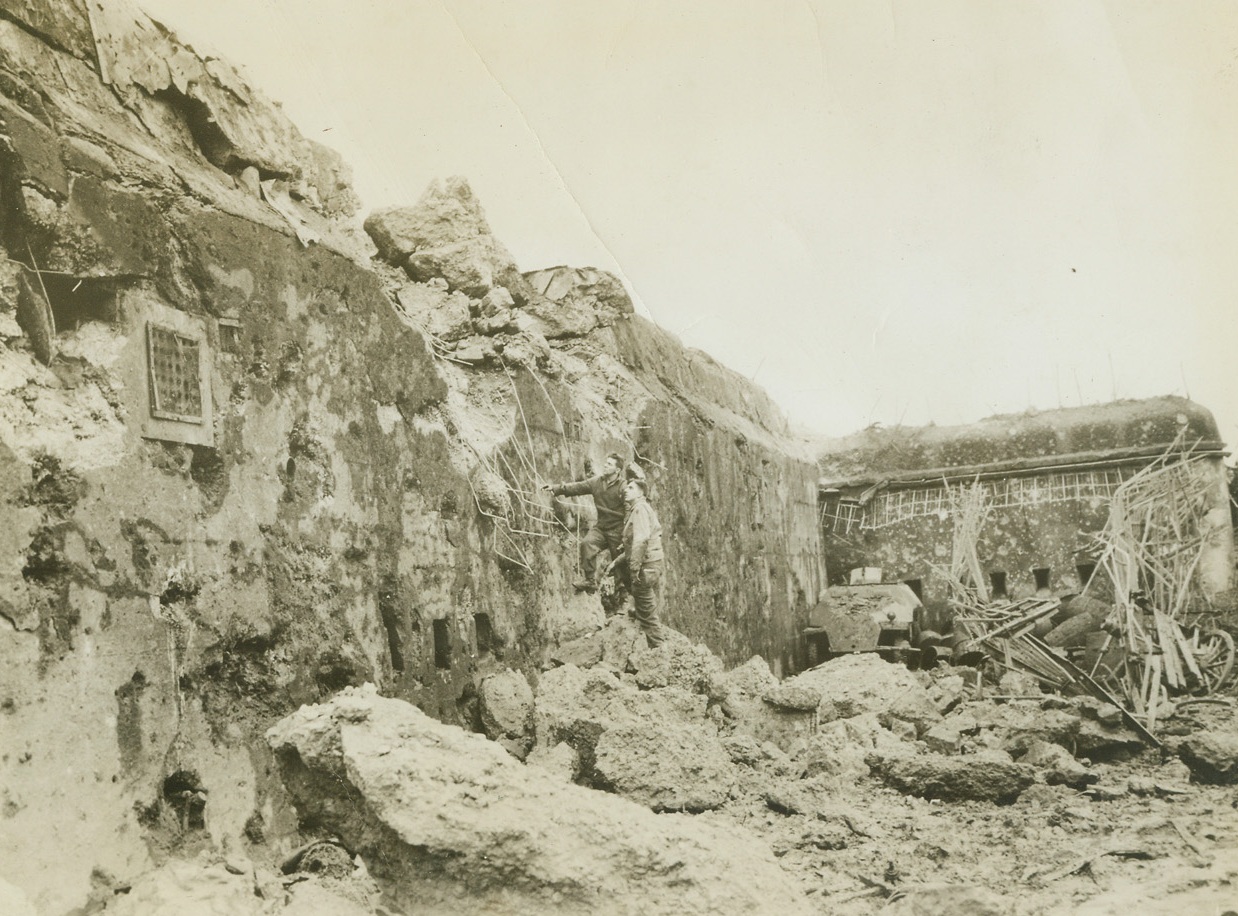 What Our Guns Did To German Fort,12/19/1944. Metz, France – Soldiers of the Fifth Infantry Division, Third Army, examine the crushed casement of Fort Defiant, a key offense at Metz. The fort was the scene bitter fighting before Yanks succeeded in driving the Germans out. Credit: ACME; 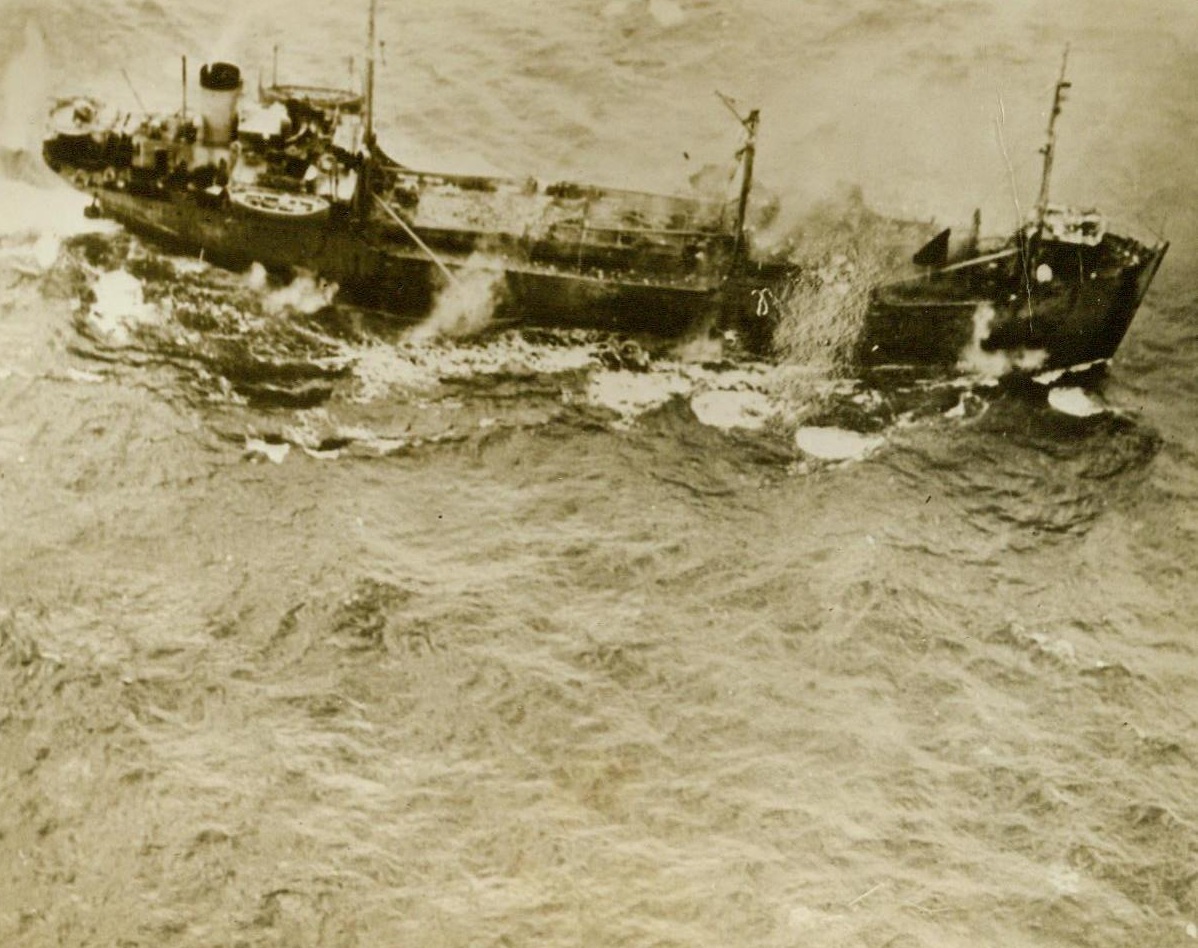 Jap Freighter Under Fire, 12/6/1944. Marshall Islands—Bombs spill form a U.S. Navy carrier-based plane, aimed at a frantically dodging Jap firefighter near Maloelap Atoll in The Marshalls. Forward gun on the ship appears to be an antiquated field gun, still mounted on wheels. The delapitated condition of the vessel indicates that the Japs are feeling a pinch for adequate ships to supply their thinly spread-out supply lines in the Pacific. 12/6/44 (ACME); 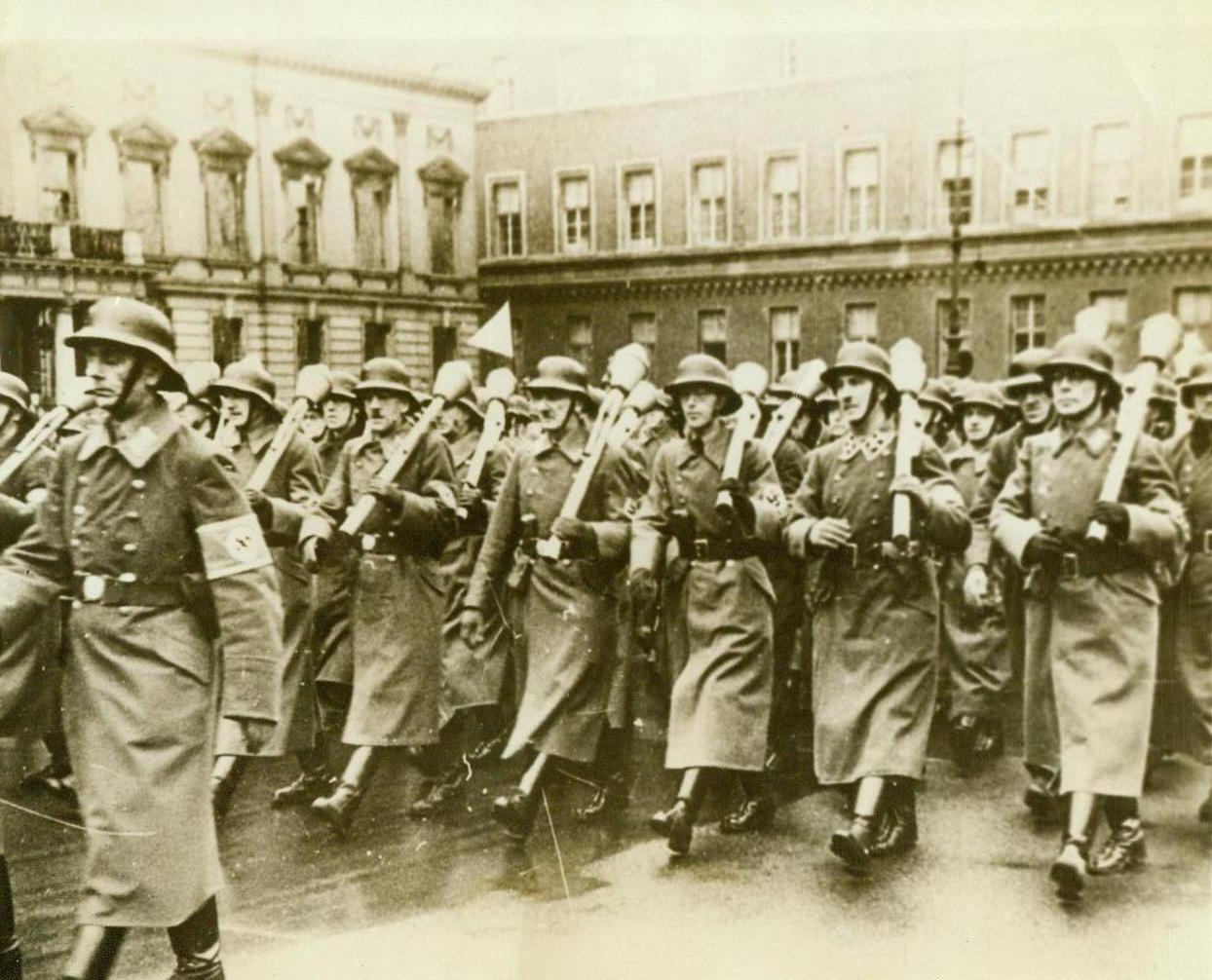 "People's Army" on Parade, 12/30/1944. Berlin—Equipped with anti-tank weapons, members of the Volkssturm parade in Berlin, according to the German caption accompanying this photo, which was obtained through a neutral source. The parade, the Nazis say was held in honor of Josef Goebbels after his address to the “People’s Army.” 12/30/44 ACME; 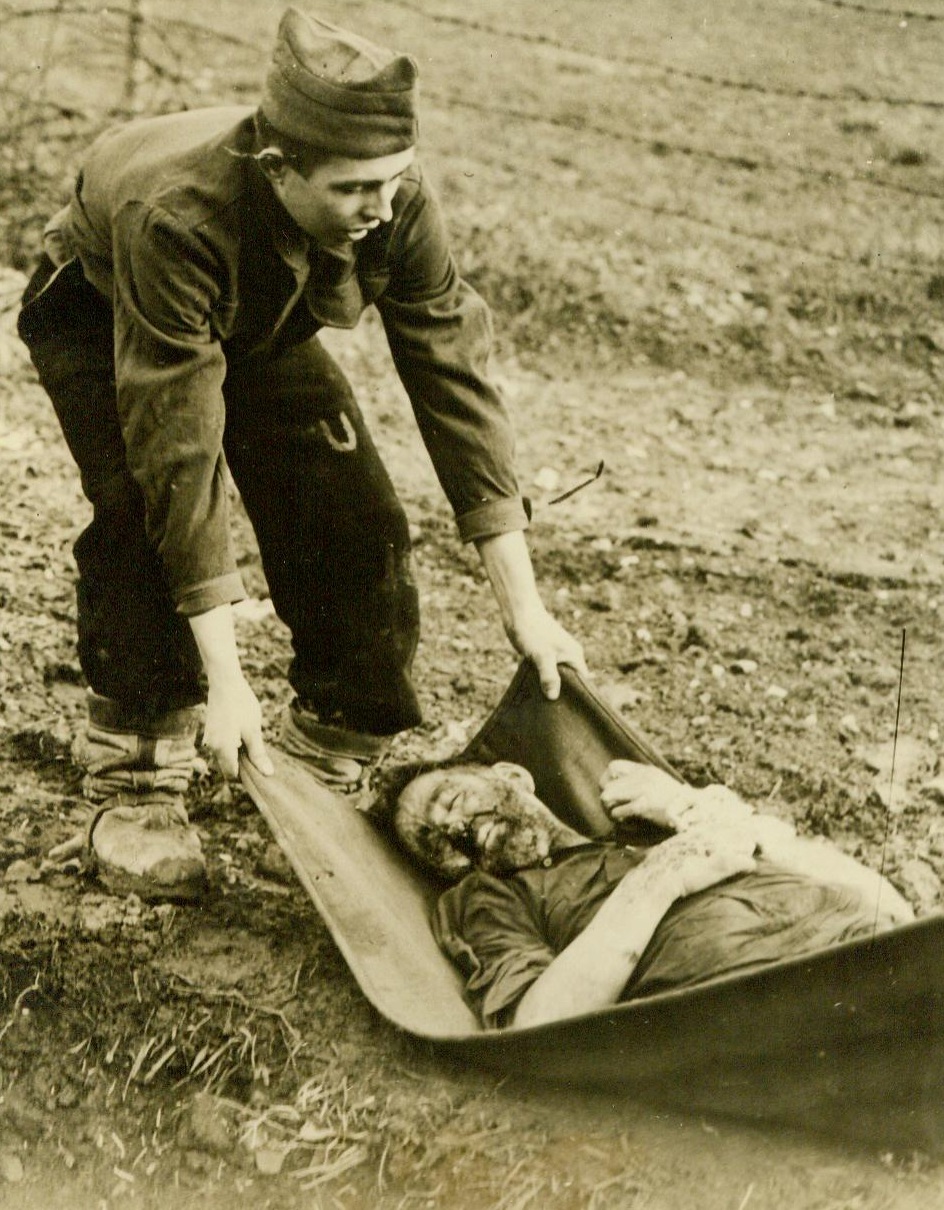 Bury The Dead In Nazi Prison Camp, 12/20/1944. France -- A prisoner who died in the former German Prisoner-Of-War camp at Sarreguemines, France, on the U.S. 3rd Army front, is being removed by one of his comrades for burial in a common grave. Yanks captured the camp December 11. Prisoners included about 1,000 Russians, Serbians, Italians, Poles, And French, some of whom had been in German hands since Nazis entered Warsaw more than five years ago. 12/20/44 (ACME);