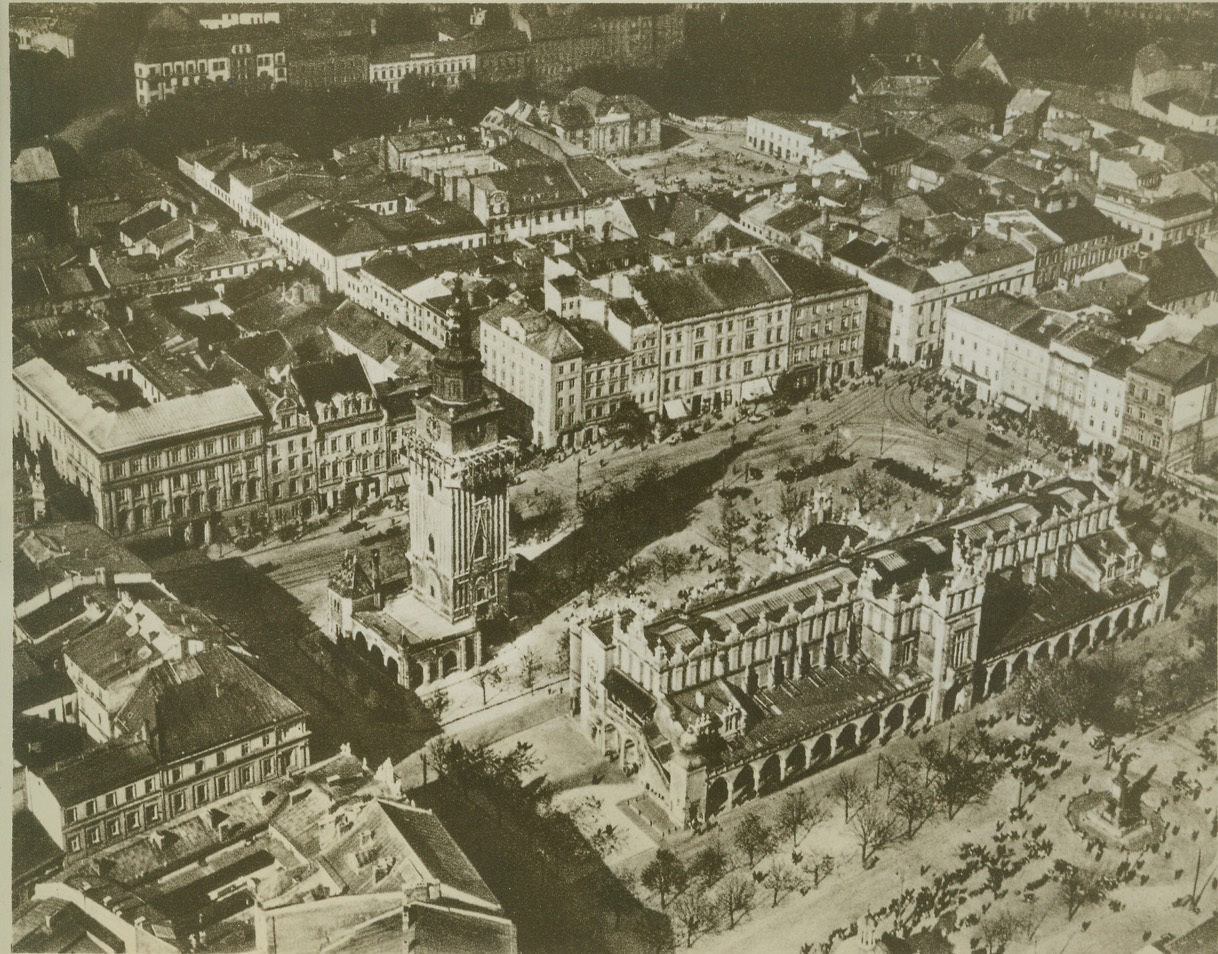 CRACOW REPORTEDLY CAPTURED IN NAZI DRIVE ON POLAND, 9/6/1939. CRACOW, POLAND – Air view of the Market Square in the important Polish city of Cracow, which the high command in Berlin announced Sept. 6th had been captured by German troops. The announcement also said that German troops, smashing forward on four fronts, were closing in on Warsaw. Credit: ACME; 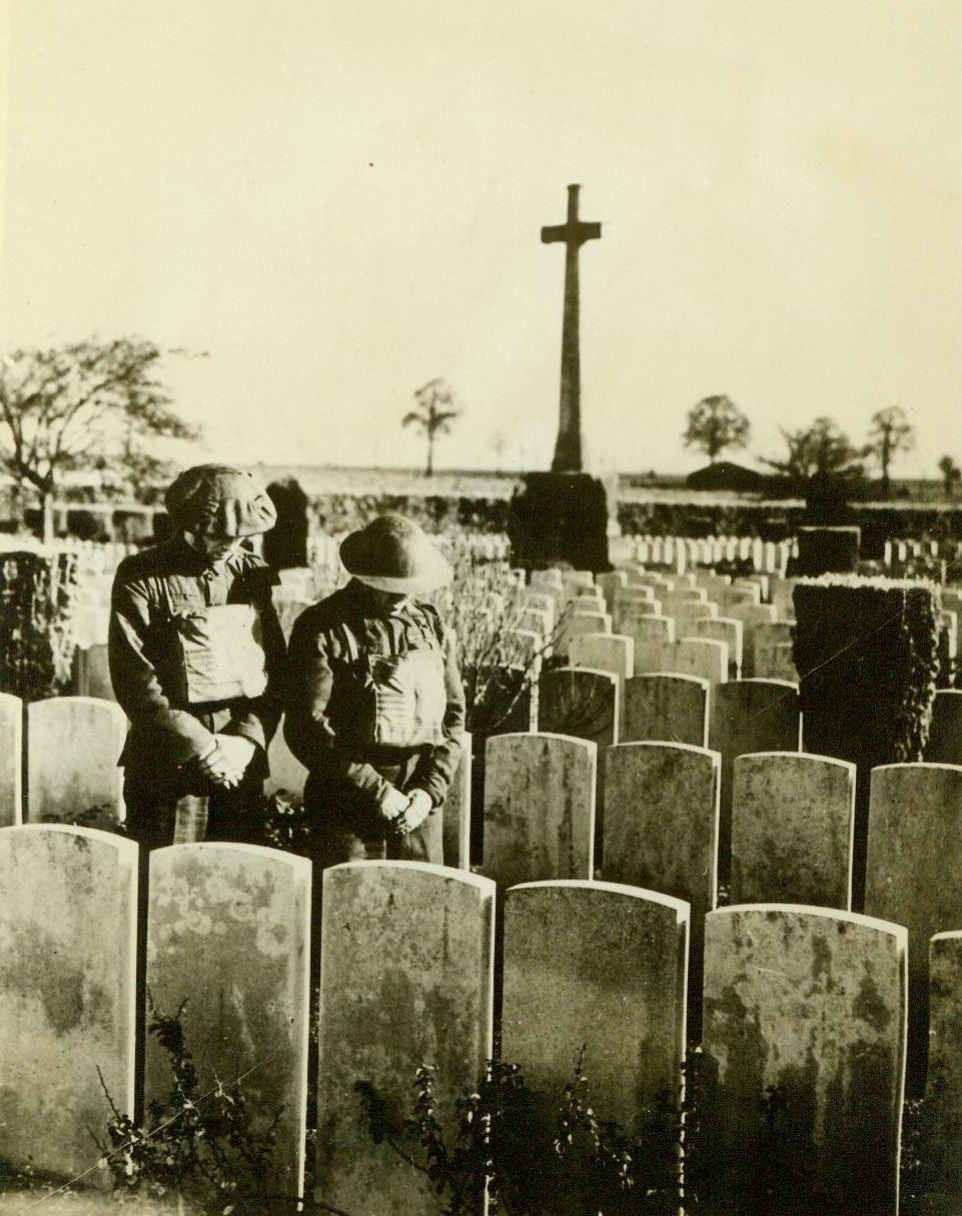 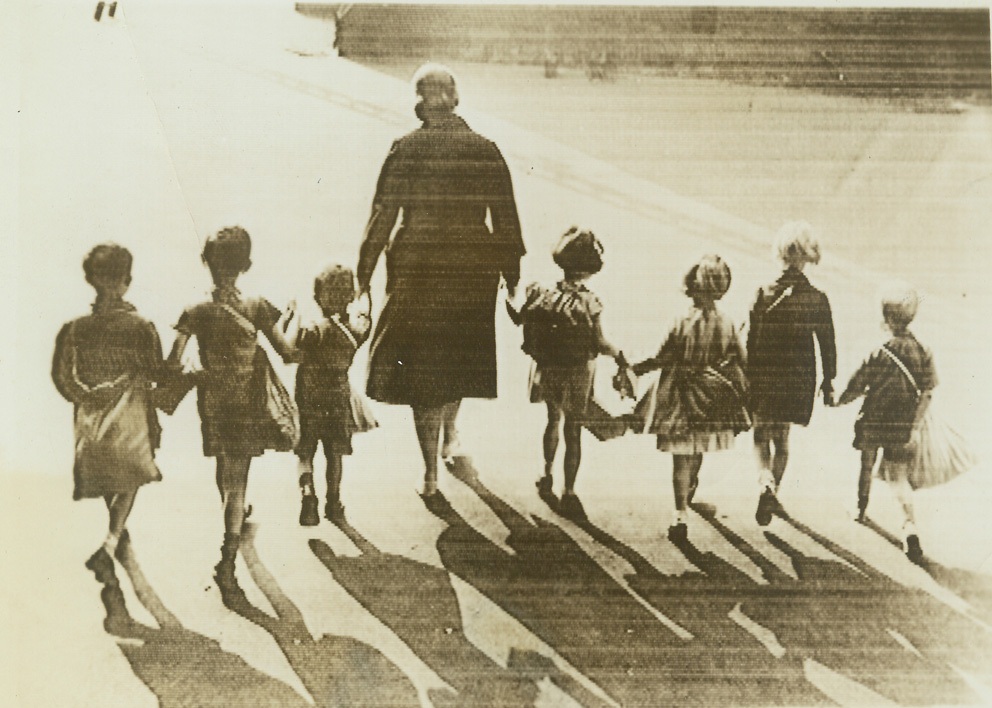 London Children Mobilized for Evacuation, 8/28/1939. LONDON – London school children, emergency kits strapped to their backs, being mobilized for evacuation of the city. As this photo was cabled to New York, Aug. 28, arrangements were perfected for a poignant war rehearsal—the practice by school children all over Great Britain of the plan worked out for them to leave their homes in event of an air alarm, go to their schools, and accompany their teacher, as shown above, to previously designated refuges in the countryside. Credit: (ACME Cablephoto); 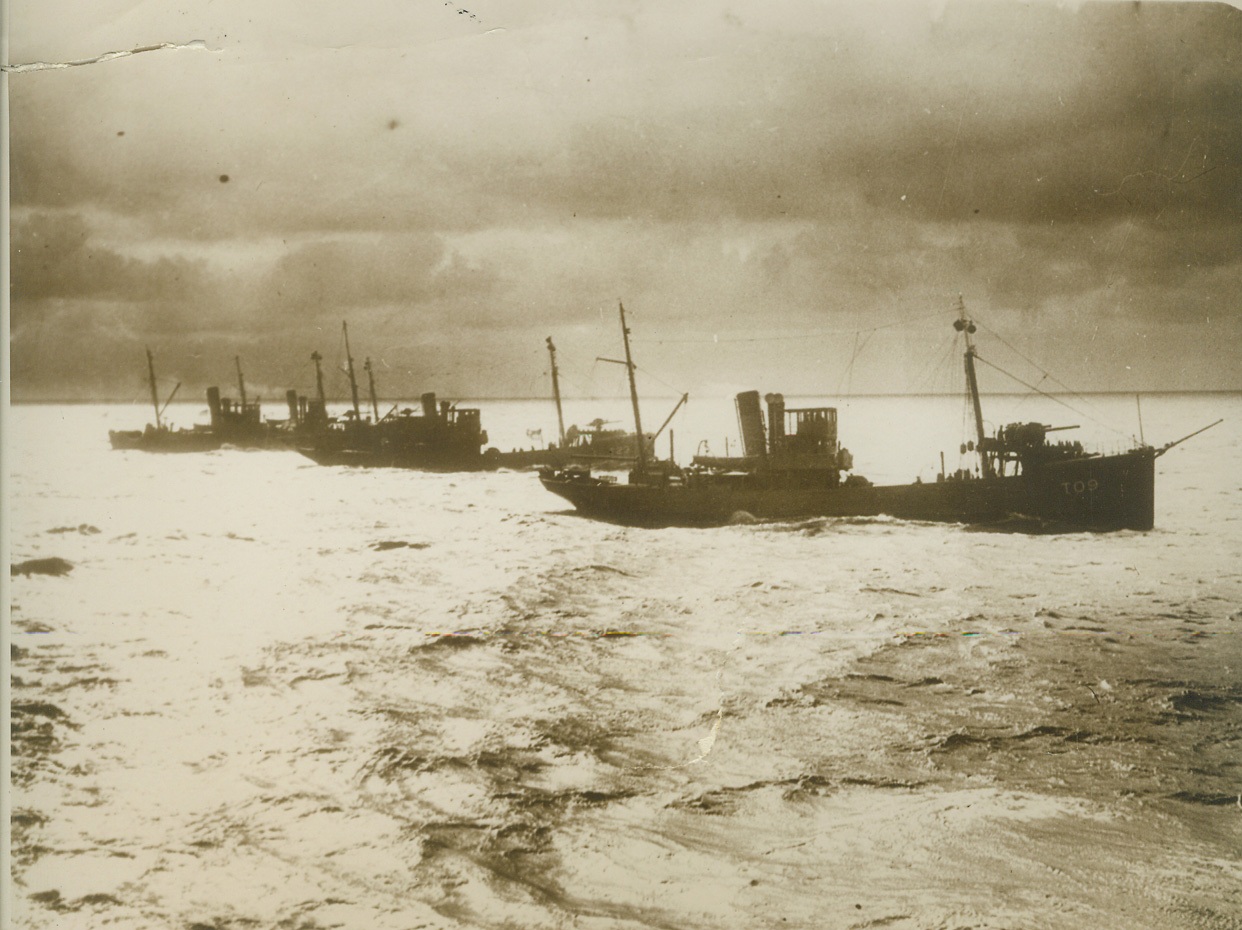 A DANGEROUS WAR TASK, 11/3/1939. A British mine-sweeping flotilla shown at dawn, going about its precarious duties, probably the most dangerous phase of the present war in Europe. Credit: ACME; 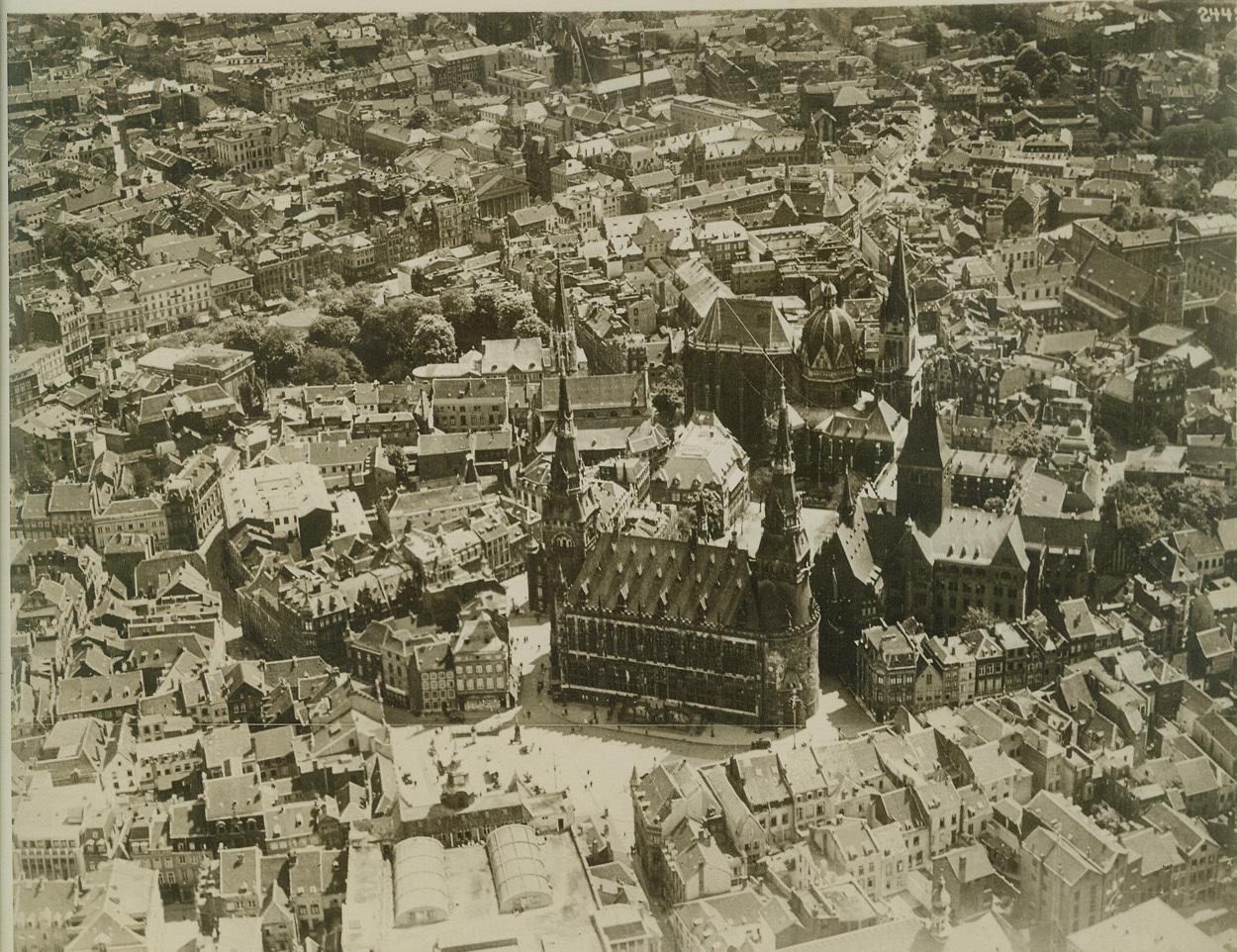 REPORTED BOMBED BY ALLIED PLANES, 9/6/1939. PARIS:- An unconfirmed report, Sept. 6, asserted that Allied planes had heavily bombed the German Rhineland industrial centers, principally around Aix La Chapelle (Aachen). Above is a general view of Aix La Chapelle. In center foreground is the City Hall (Rathaus), which in part dates back to the days of the Karolingian Emperors of the Holy Roman Empire of the Middle Ages. Credit: ACME; 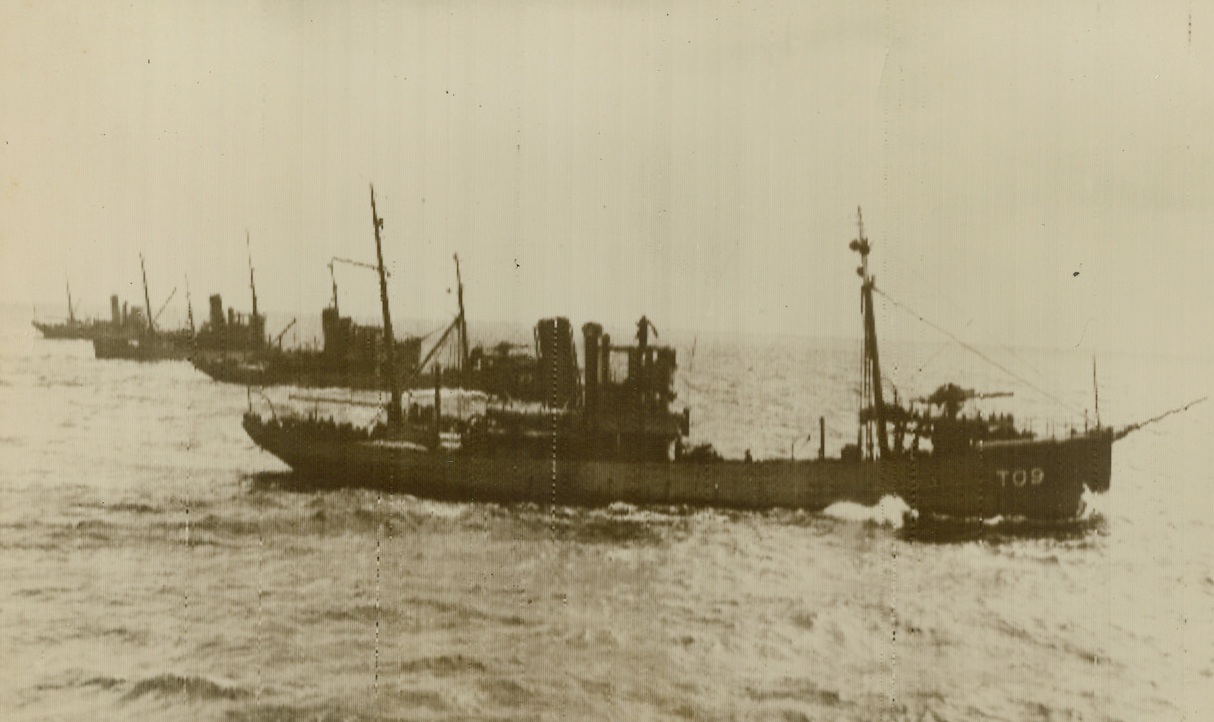 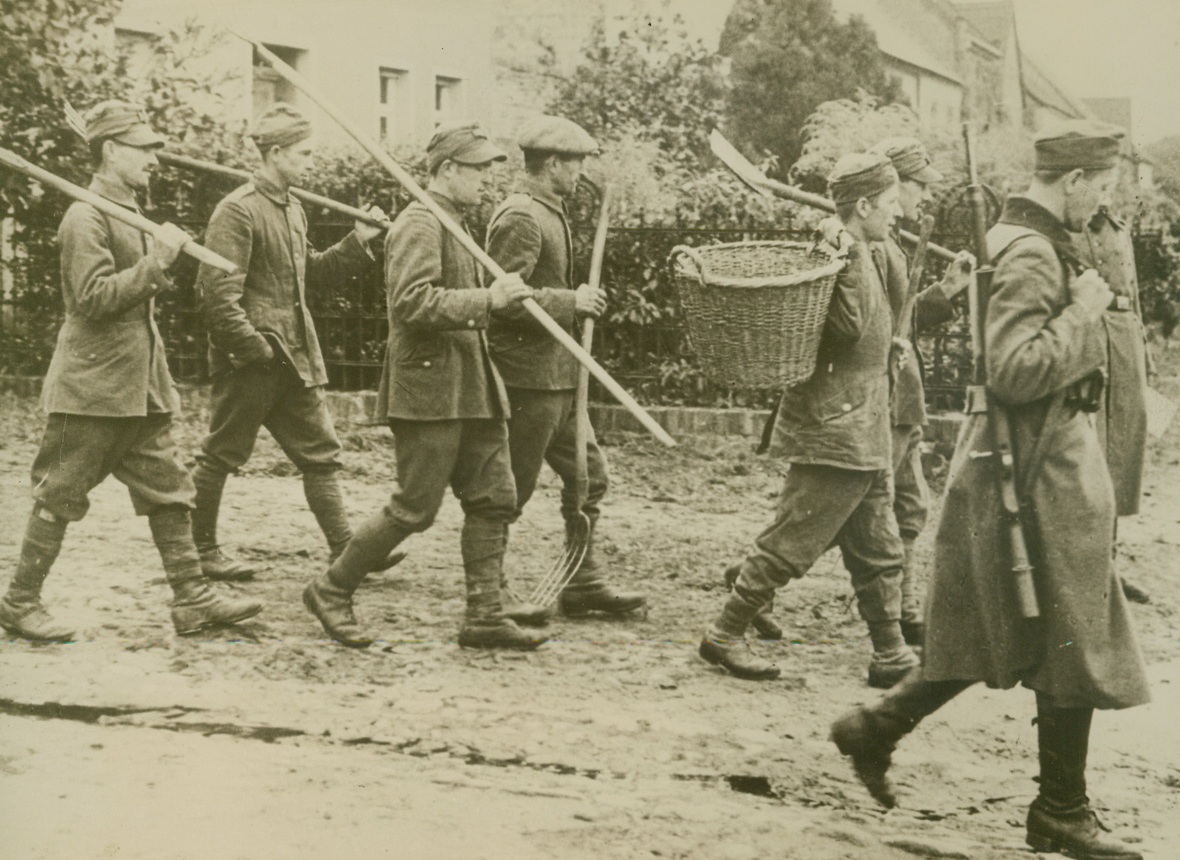 POLISH PRISONERS GO TO WORK, 10/24/1939. GERMANY—Under armed guard, Polish military prisoners are shown on their way to work. It is reported the prisoners are being forced to work the land by their German captors. Credit: Acme; 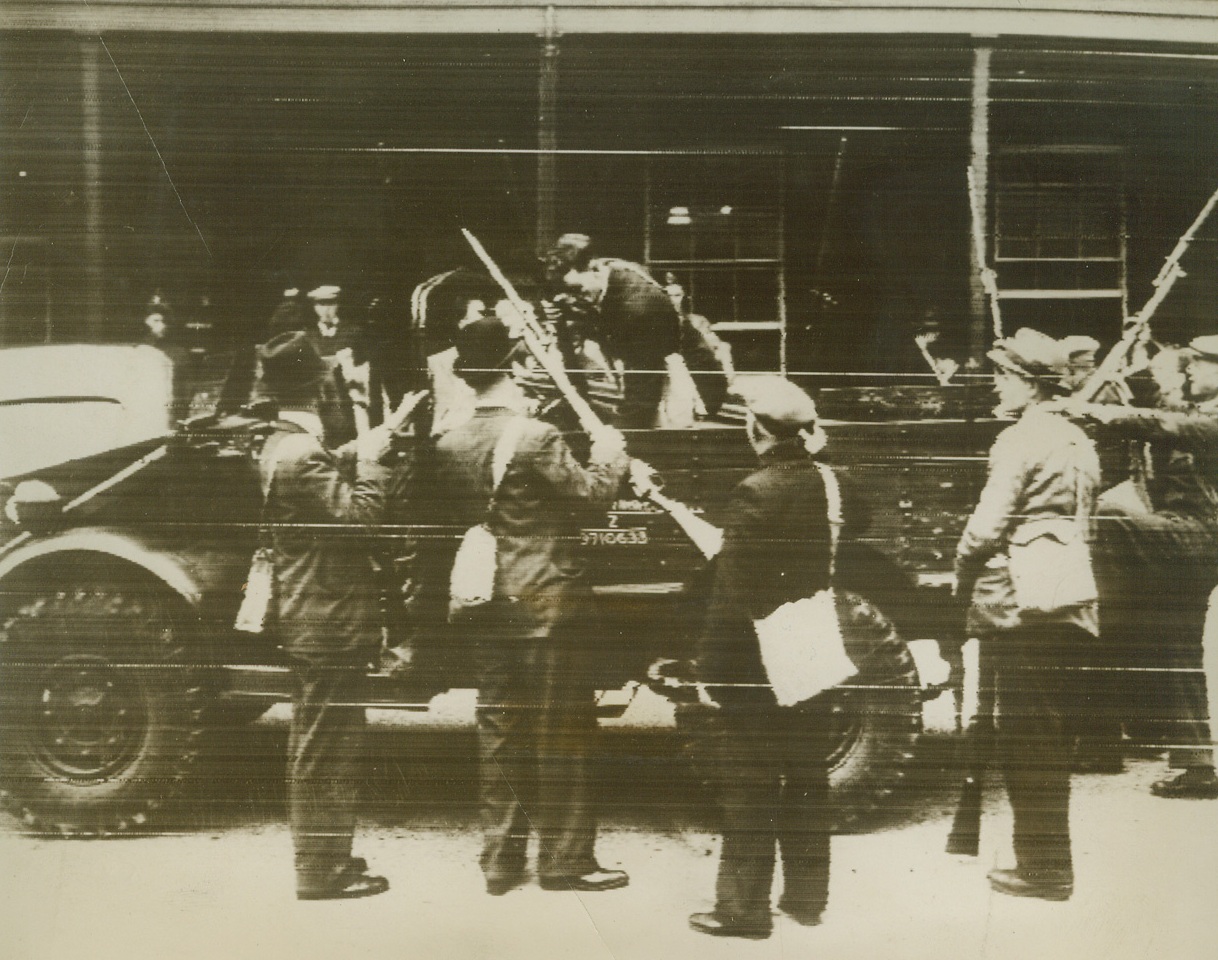 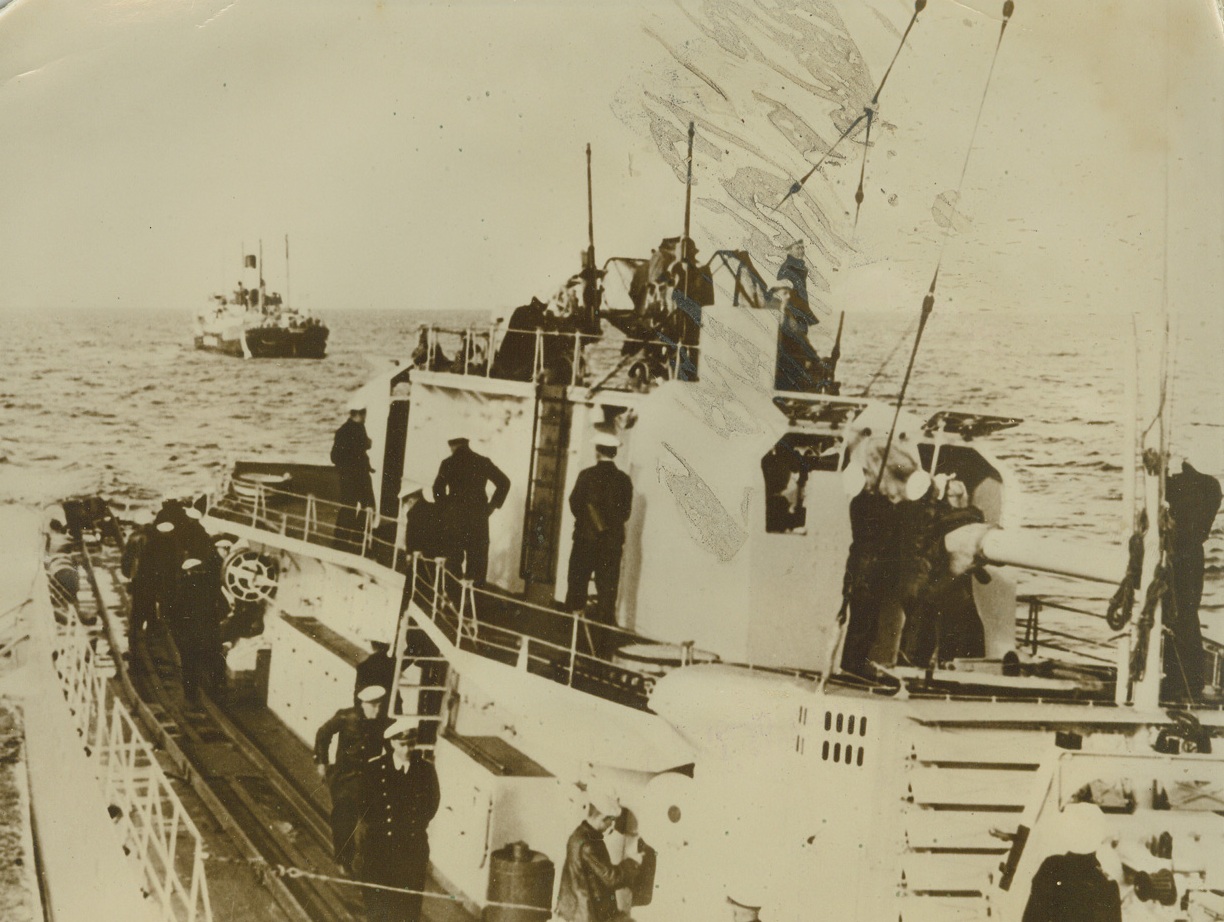 German Contraband Control in Action, 12/22/1939. A ship of the German contraband control, which operates mostly in the North Sea, leads a vessel stopped for search to a nearby port. Germany’s efforts to halt supplies to the Allies have met with marked success, according to Nazi figures. Credit: ACME.; 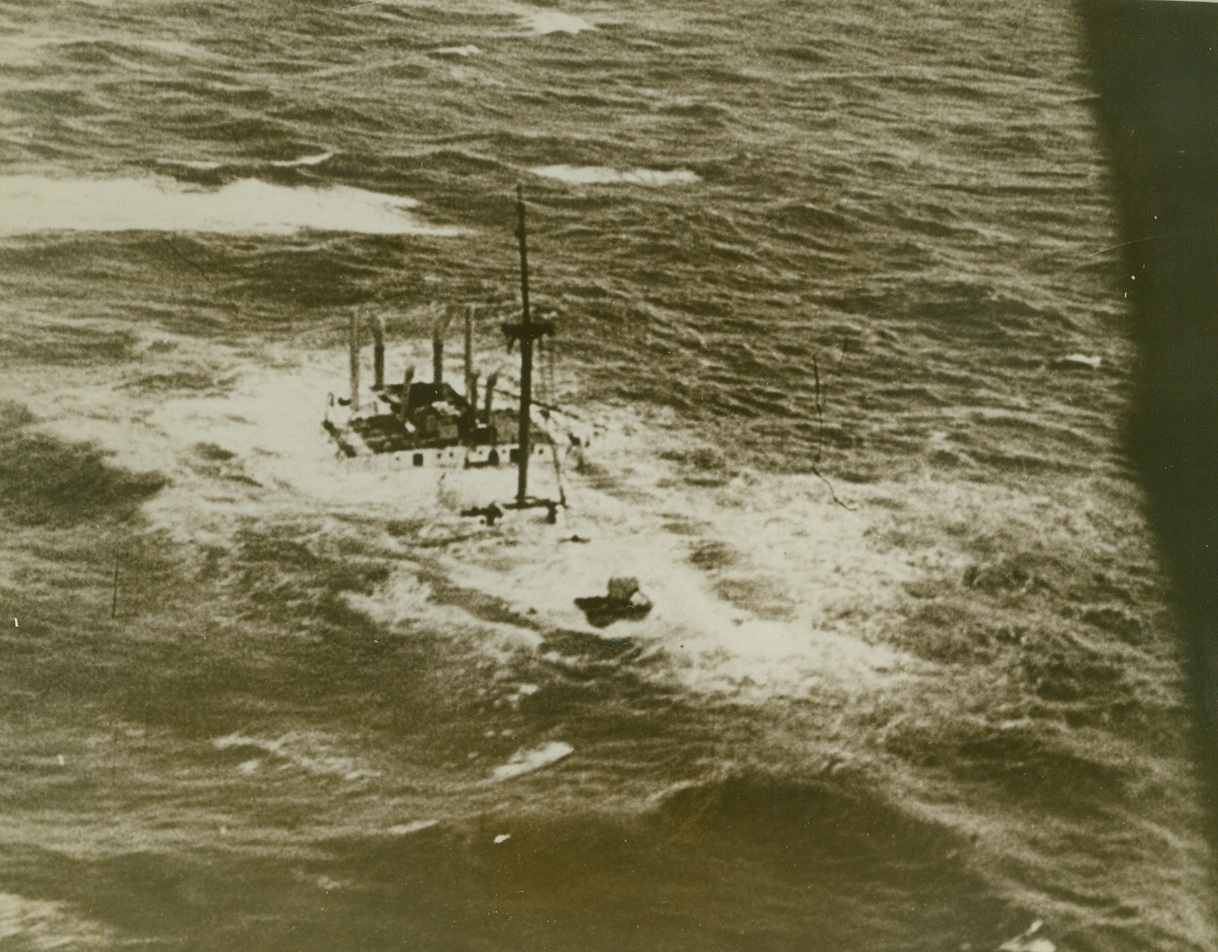 En Route to Davey Jones’ Locker, 12/22/1939. This picture, taken from a German scouting plane, shows a boat sinking in the North Sea. No information was given as to whether the ship struck a mine, was torpedoed or bombed by the planes.Credit (Movietone News from ACME); 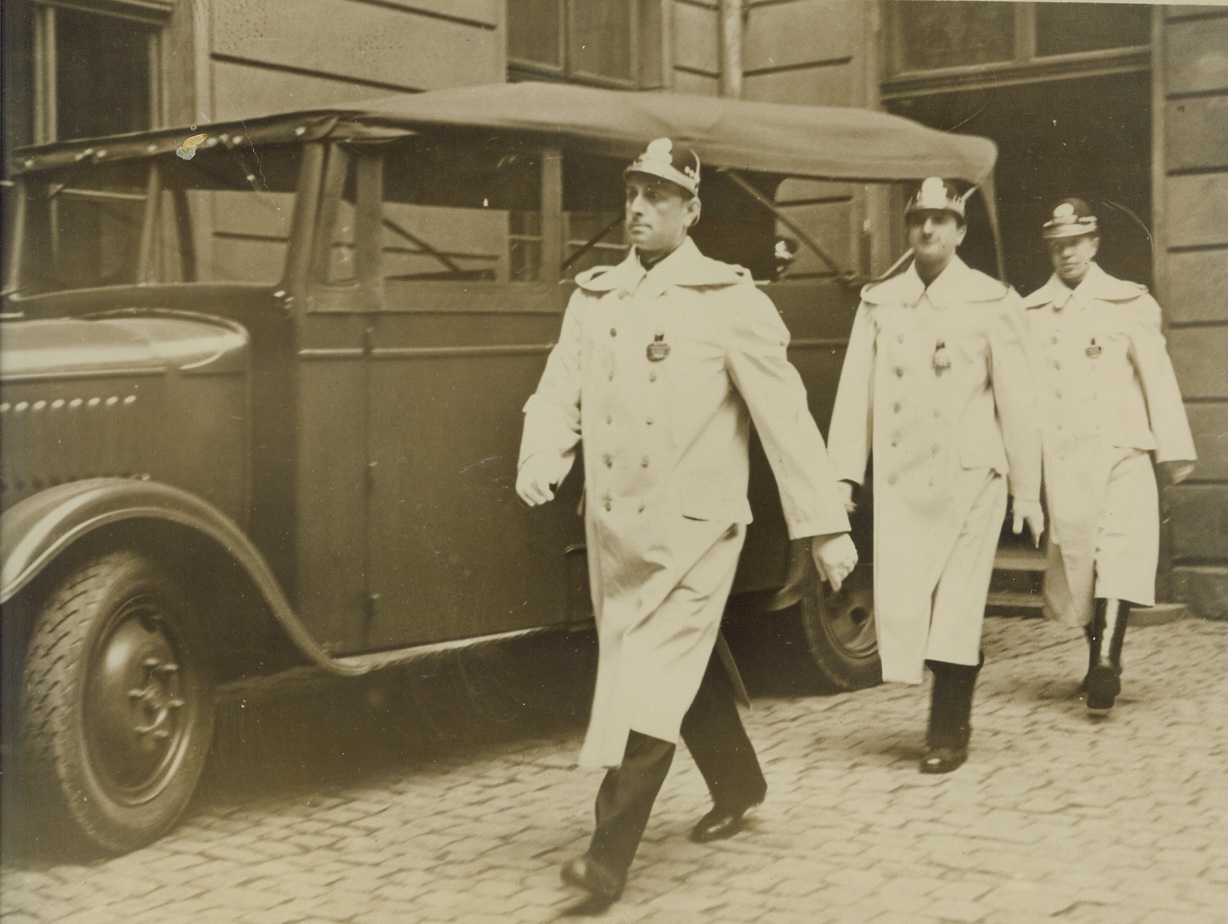 White Coats for Prague Police to Wear in Blackouts. 11/19/1939. PRAGUE – A trio of Prague policemen turning out in their new white coats for wear at night during (blackouts)…coats make police easily seen at night. …speculation as the whether this is to make ….targets or to distinguish from the black….Elite Guards of Herr Himmler, head of the Nazi…in the round up of demonstrating Czechs. Credit (Acme); 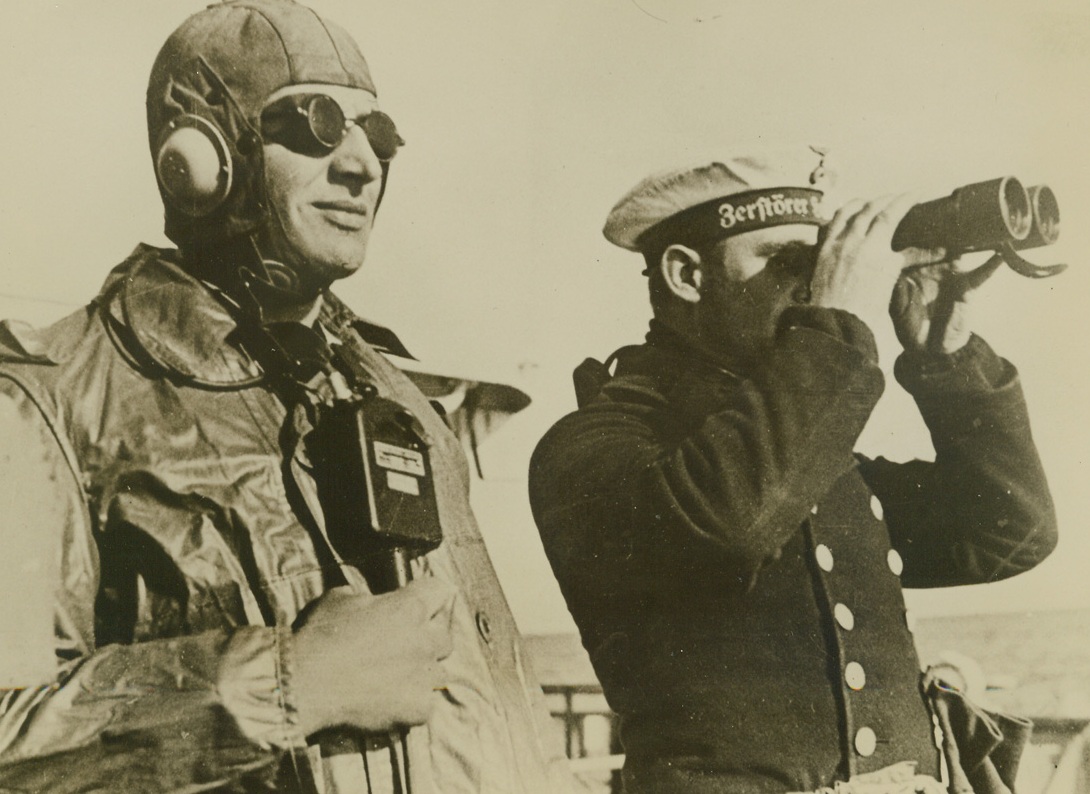 GERMAN DESTROYER ON PATROL DUTY IN NORTH SEA, 11/13/1939. GERMANY—According to German sources this picture was made aboard a German destroyer on patrol duty in the North Sea. As one officer scans the horizon for signs of smoke from foreign vessels, the other officer stands ready with microphone and earphones to communicate with the engine room. Credit: Acme; 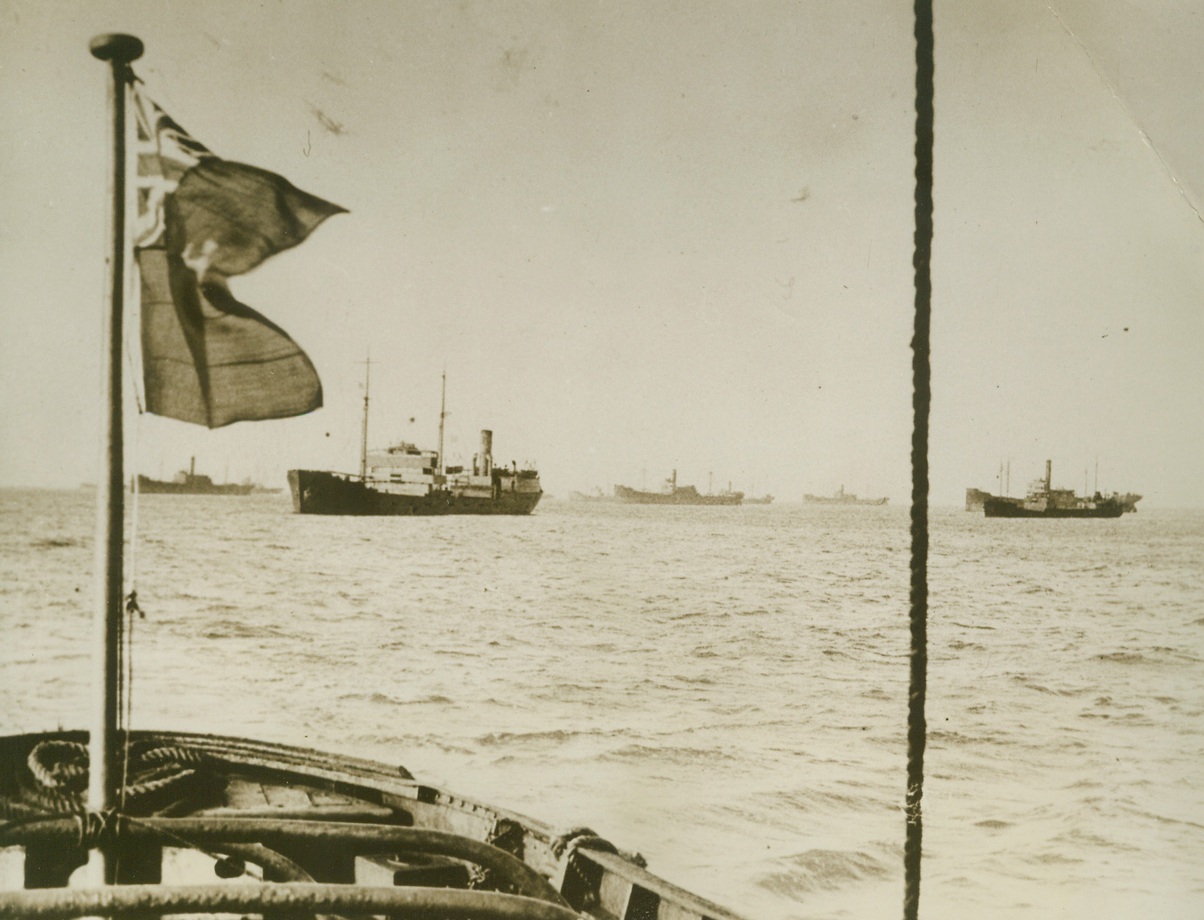 British Ships Gathering for Convoy Sailing, 11/23/1939. Somewhere in England—Merchant ships of all shapes and sizes gather at an assembly point for sailing in convoy under protection of British warships. Credit: ACME.; 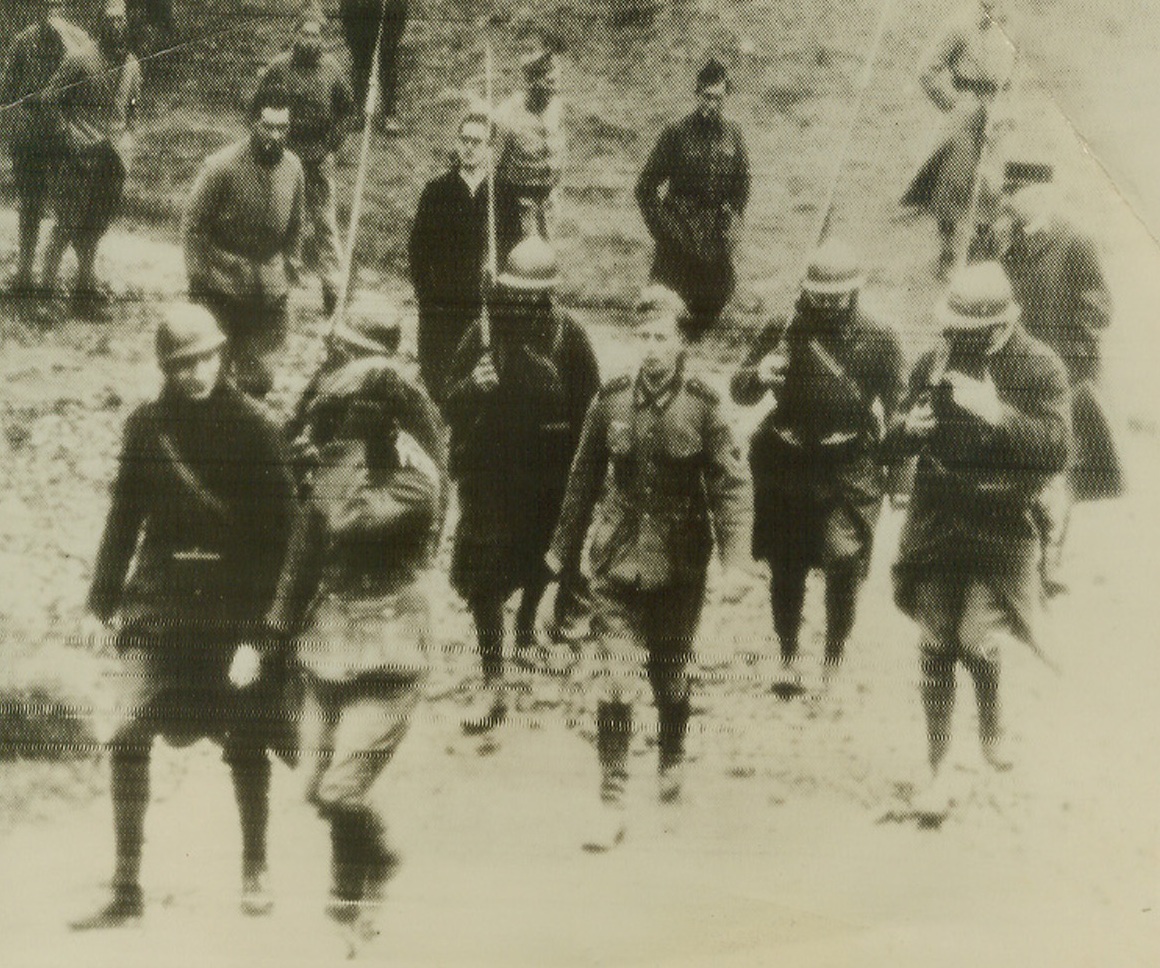 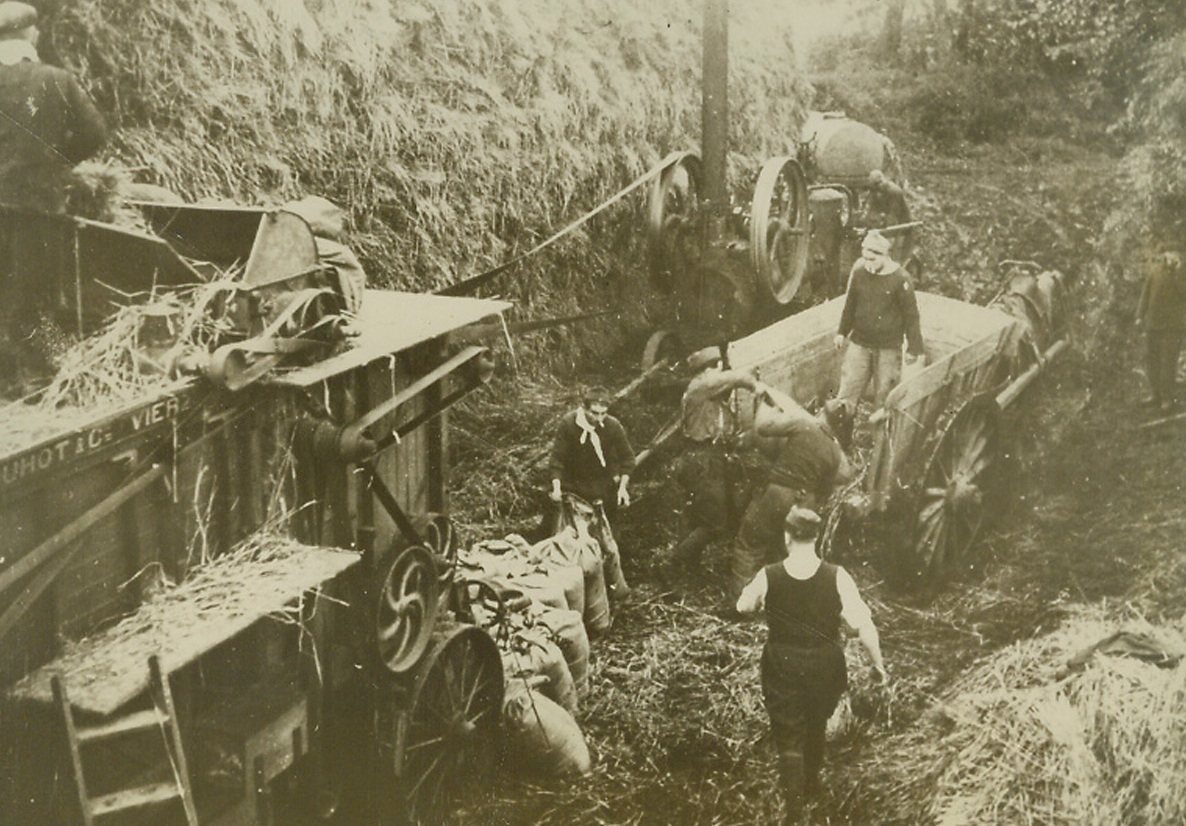 Soldiers Help With Threshing, 11/17/1939. France—Perhaps giving a hint of the lack of activity on the western front, these soldiers are helping with the threshing of wheat somewhere in France. Credit: ACME.; 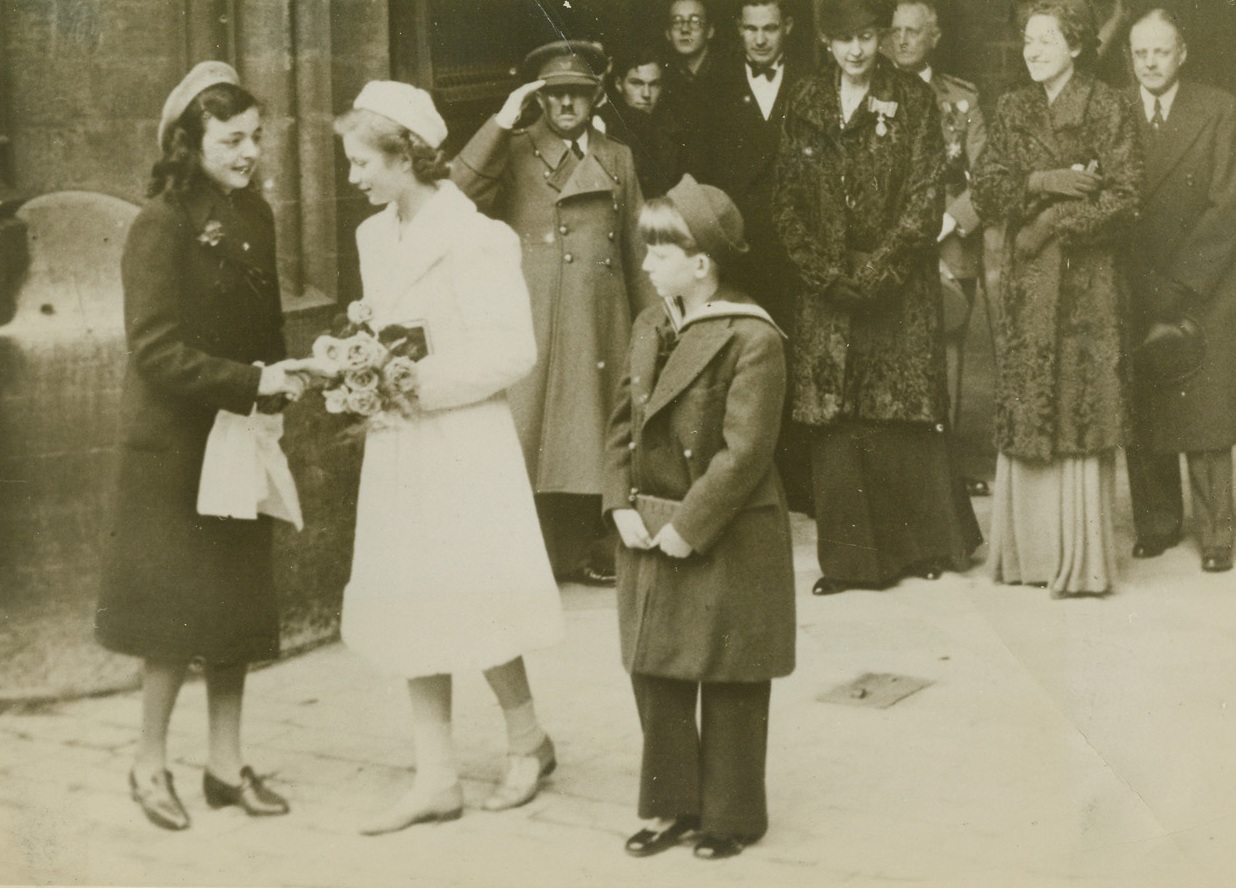 Ration Books Ready for Britons, 11/9/1939. London, England -- Millions of ration books are now ready for distribution under the government’s rationing scheme, which is to come into operation shortly. There are three kinds of ration books--for adults, for travelers, for children--in three different colors. Photo shows the ration books (left to right): a traveler’s, a child’s and an adult’s. Passed by censor. Credit: ACME; 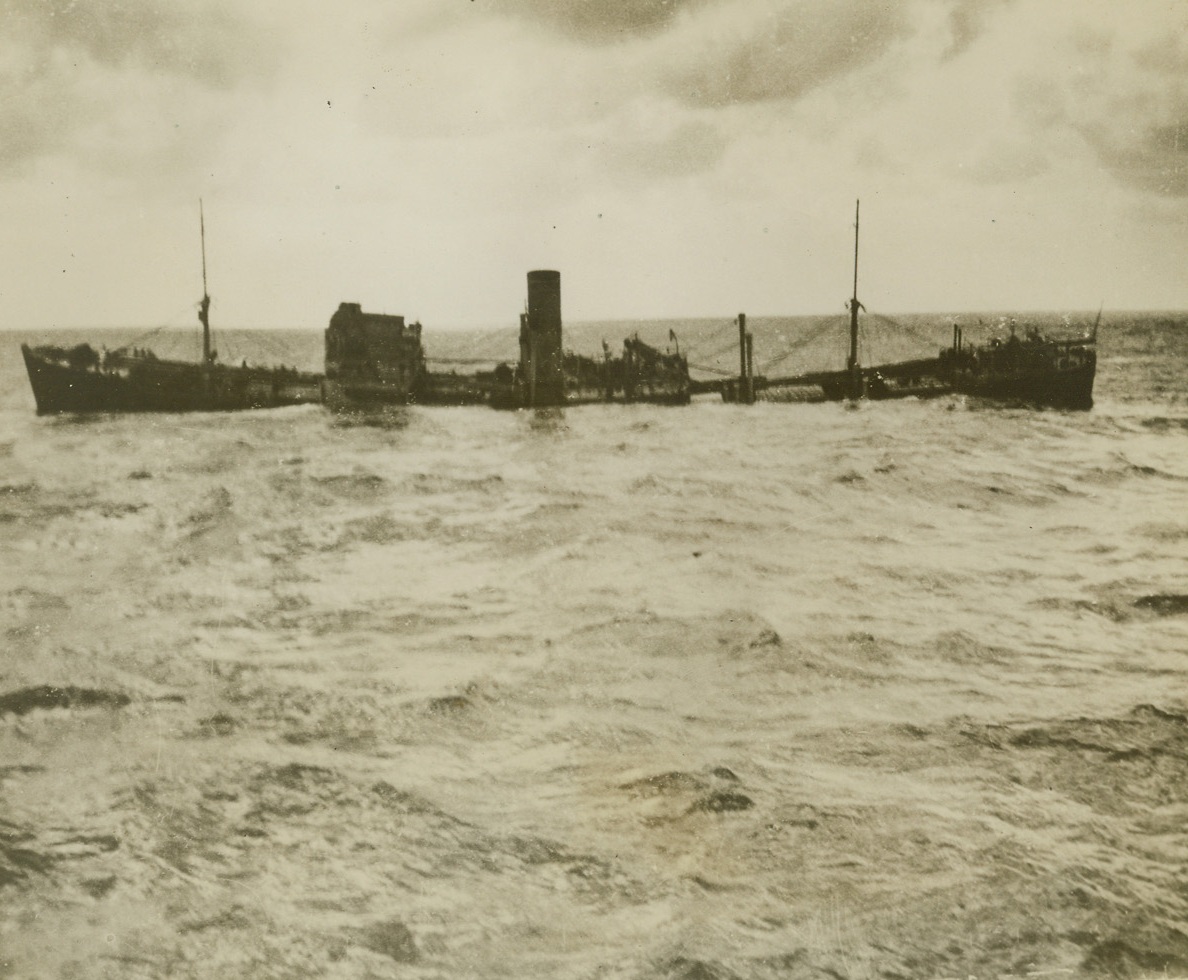 ANOTHER U-BOAT VICTIM, 12/27/1939. The British steamer S.S. Malabar sinking in the Atlantic, after being torpedoed by a submarine. The ship broke in two during her final plunge. The third engineer and four Lascar firemen were killed by the explosion, but 76 officers and crew were picked up by a British warship.Credit: Acme; 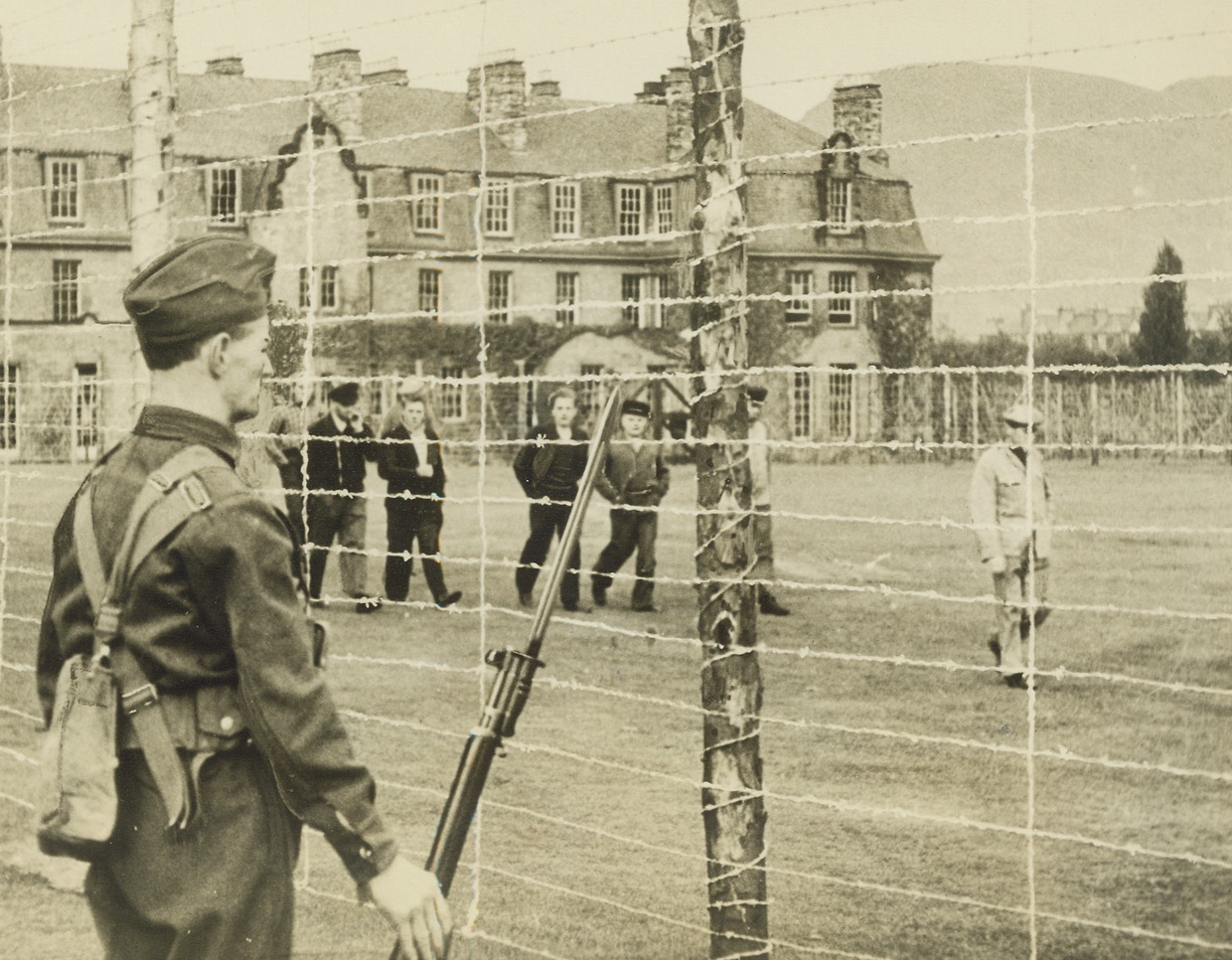 German Prisoners of War in a British Internment Camp, 11/9/1939. Somewhere in England – This picture is one of the first to be made of German prisoners of war, captured and interned for the duration at a large country mansion. The prisoners, among them U-Boat crews, are pictured exercising on the fenced and well-guarded grounds of the mansion. Freedom for exercise, good food and liberty to listen to British Broadcasting Company News and programs is given them to make their confinement as easy as possible. Passed by Censor Credit: ACME; 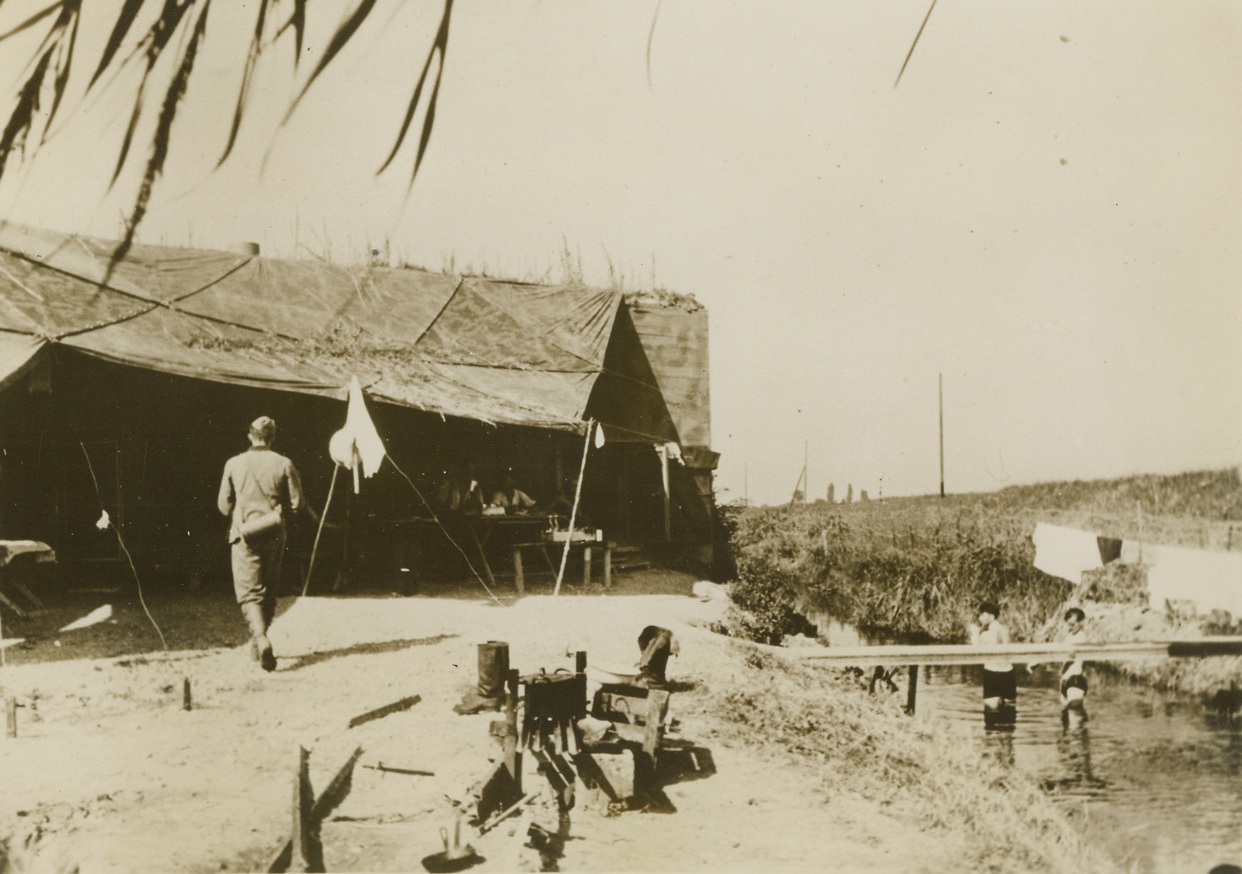 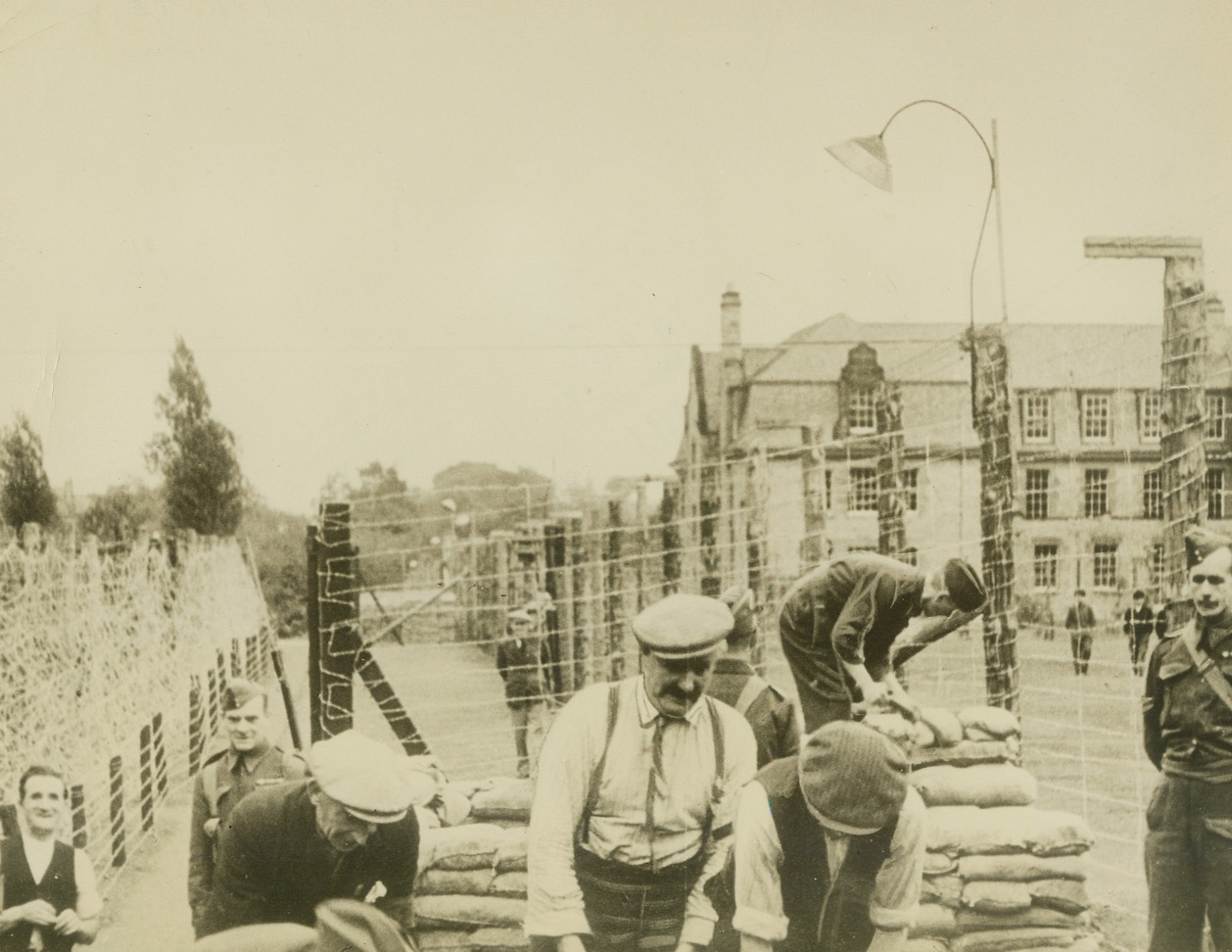 Air Raid Shelter for German Prisoners of War, 11/9/1939. Somewhere in England – While workmen in the foreground build an air raid shelter for their protection in case German bombers should drop their “eggs” in the vicinity, German prisoners of war can be seen exercising on the grounds of a large country mansion where they are interned for the duration. This picture, one of the first to be made of German war prisoners, who included members of German U-Boat crews, was rushed to the United States via Trans-Atlantic Clipper. Passed by Censor. Credit: ACME; 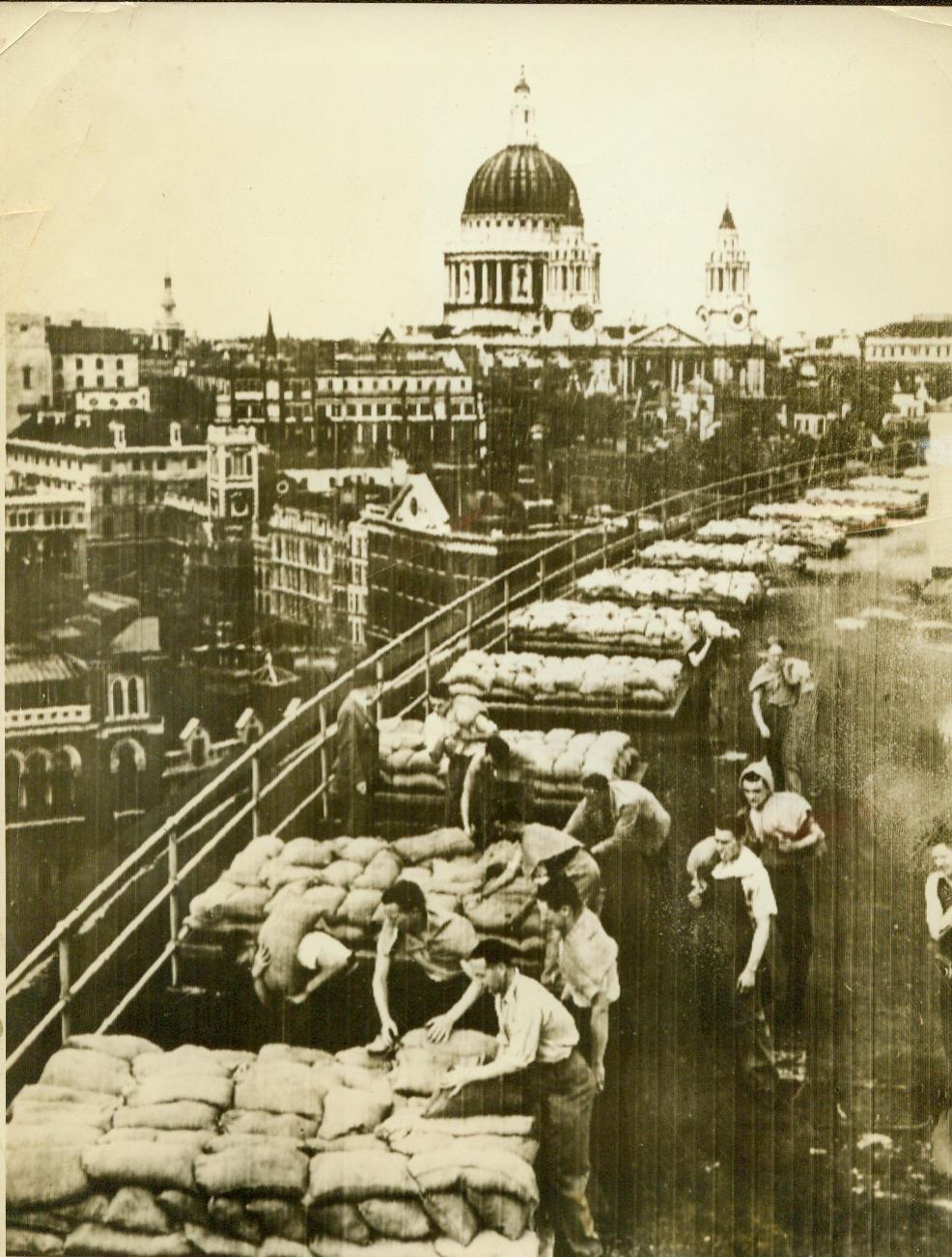 Sandbag London building as air raids precaution, 8/27/1939. LONDON – Workers sandbagging the roof on an office building in London, Aug. 27th, as the British capital continued its widespread preparations for war. The dome of St. Paul’s Cathedral may be seen in the background of this picture radioed from London. Eyes of the world were focused on London today as cabinet met in most important meeting since world war. CREDIT LINE (ACME radiophoto) 8-27-39;