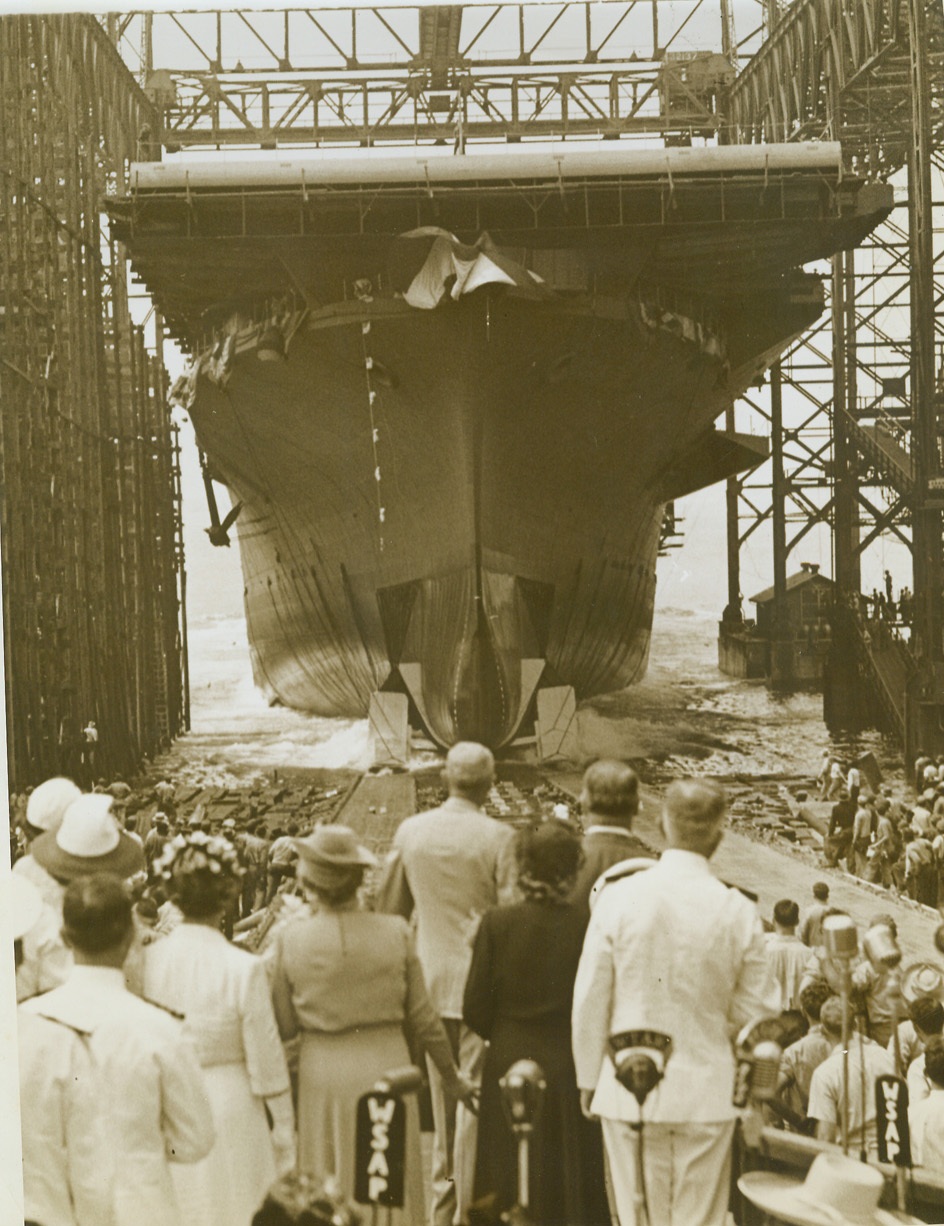 NEW CARRIER HORNET LAUNCHED, 8/31/1943.NEWPORT NEWS, VA.- The new 25,000 ton flattop Hornet slides down the ways at Newport News, christened by Mrs. Frank Knox, wife of the U.S. Secretary of the Navy. Knox paid tribute to Doolittle’s men who last year took off from the former Hornet to raid Tokyo, and said Japan could expect bigger and better raids in the future. Credit: OWI Radiophoto from ACME; 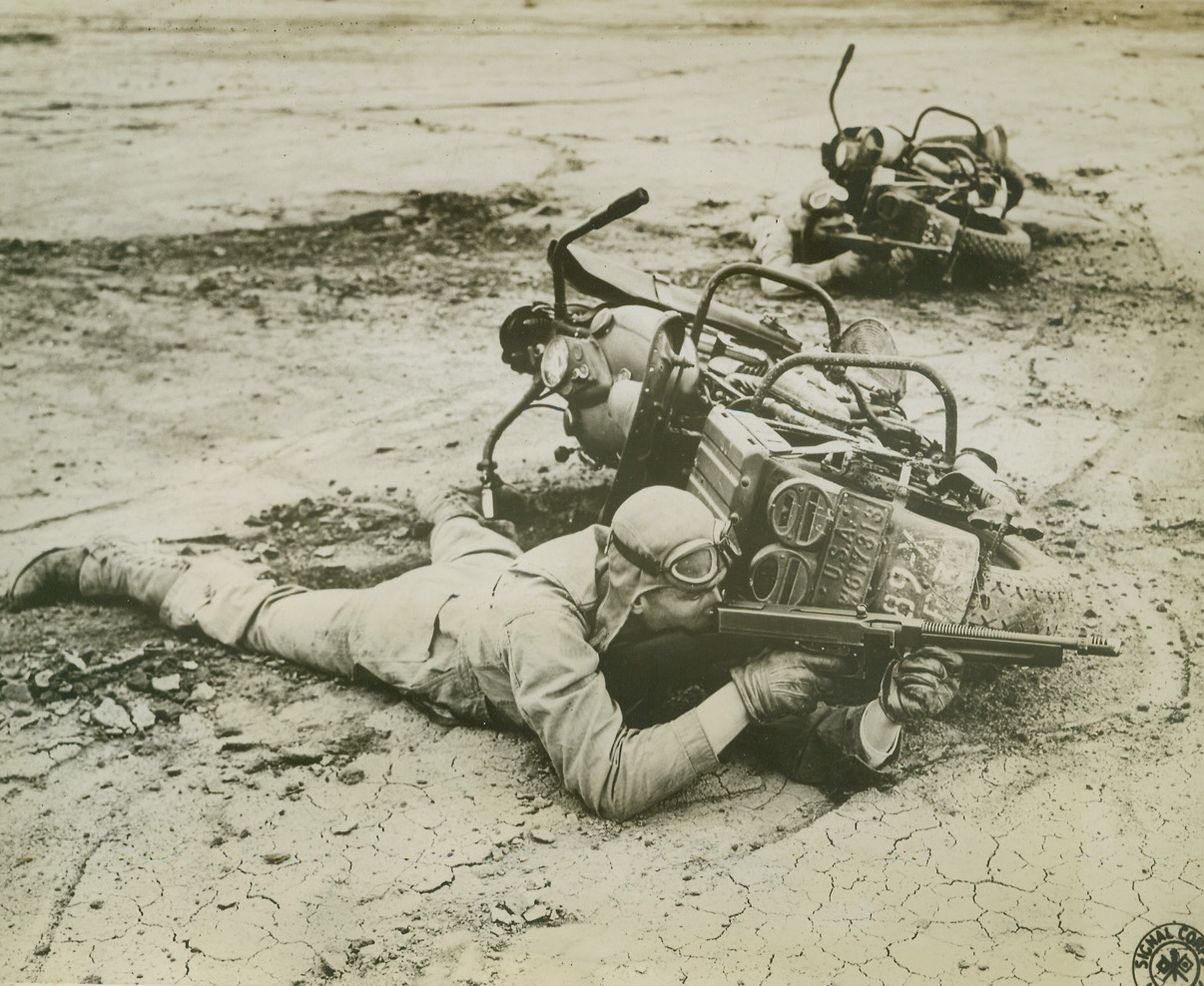 ROUGH WORK BUT THEY LIKE IT!, 8/23/1943. CAMP CARSON, COLO.—Commando training has nothing on the work these rough riding cyclists of the Reconnaissance Troop, Camp Carson, Colo., do to keep themselves and their machines ready for the battle front where paved highways are apt to be conspicuous by their absence. A soldier’s motorcycle makes a good shield in combat.Credit: U.S. Signal corps from Acme; 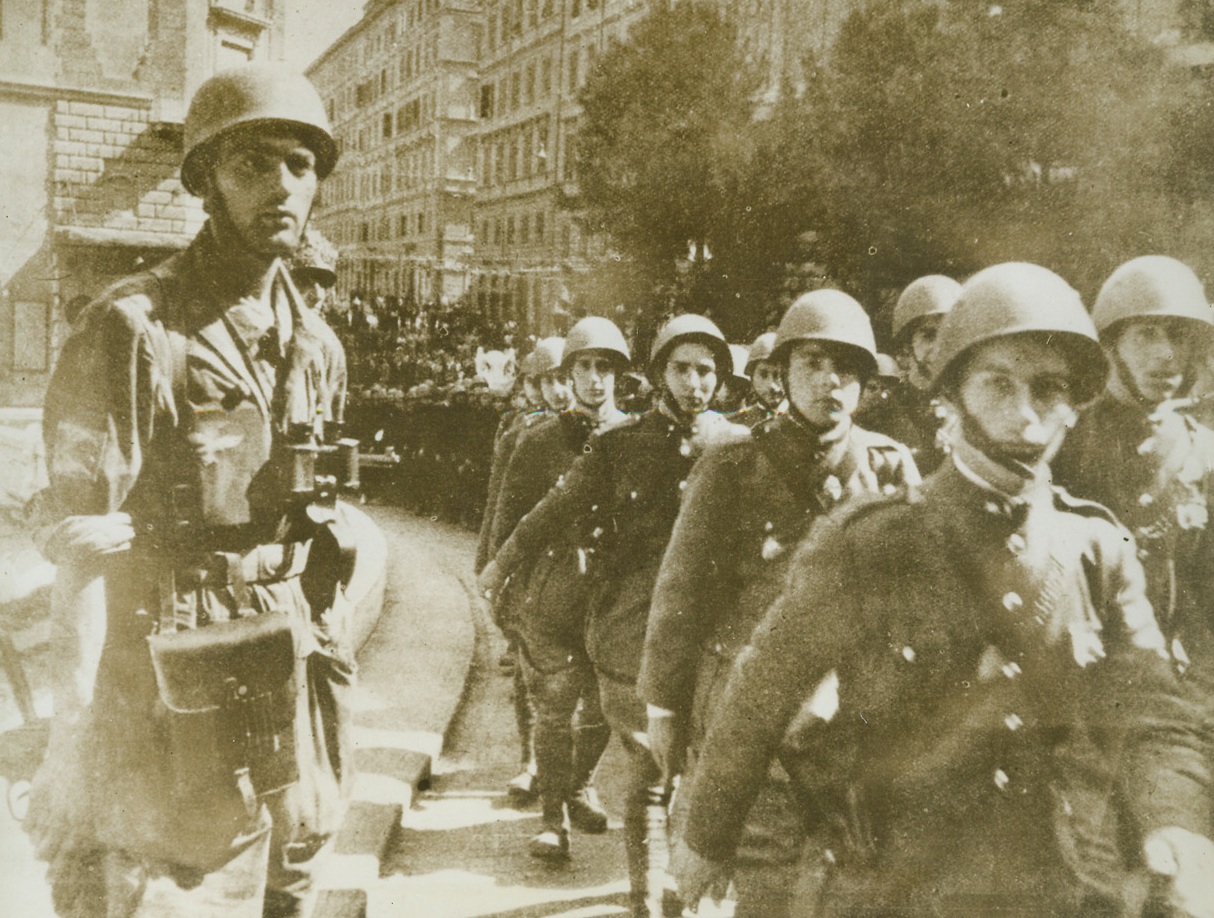 Oh, Yeah?, 8/5/1943. ROME – Nazis claim that this photo shows stalwart Italian soldiers marching through Rome, the city they will help the Germans defend against Allied assault. The statement is reminiscent of other German wishful thinking about their onetime Italian Allies. Credit Line (ACME); 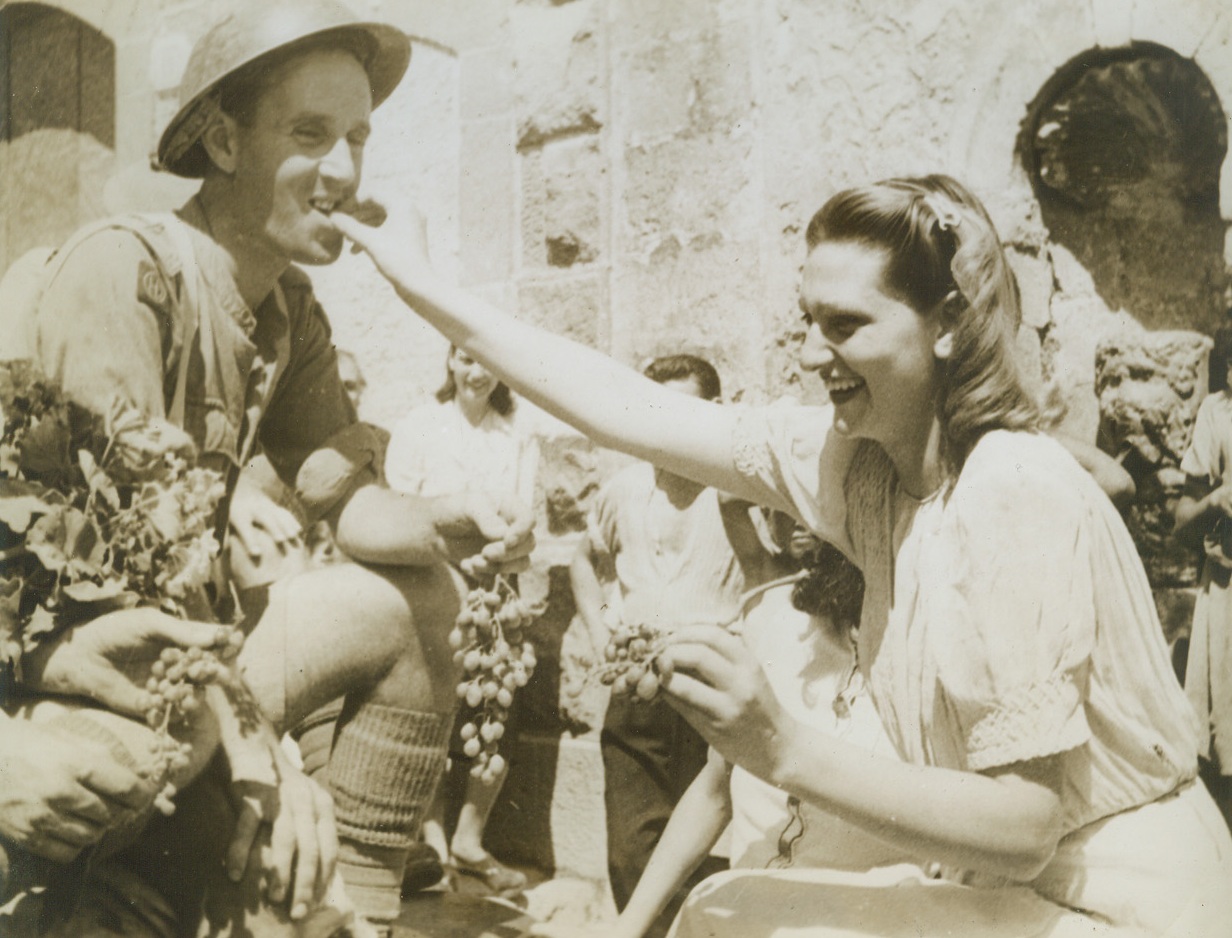 Grapes for the Victors, 8/29/1943. CATANIA, SICILY—This British Tommy grins as a pretty Sicilian girl feeds him grapes and a great big smile to welcome him and his Eighth Army buddies to a village new Catania. Although they were unable to speak English, happy Sicilian women conveyed their greetings to the victors with flowers, fruit and smiles. Credit: ACME.; 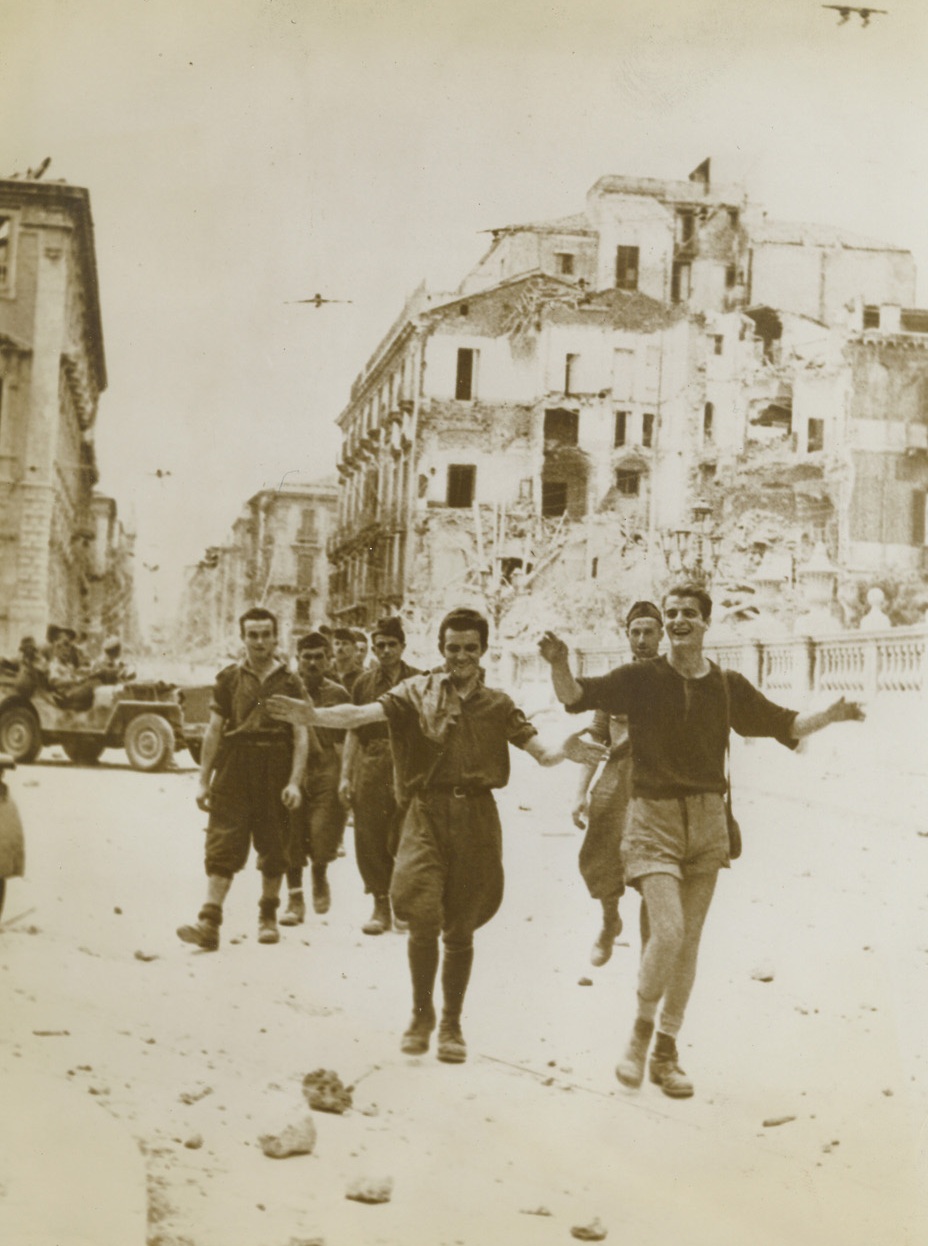 No Title, 8/29/1943. …Troops after the fall of …In the background, a group of Tommies halt their car to watch the unique …of the prisoners march. Credit Line (ACME); 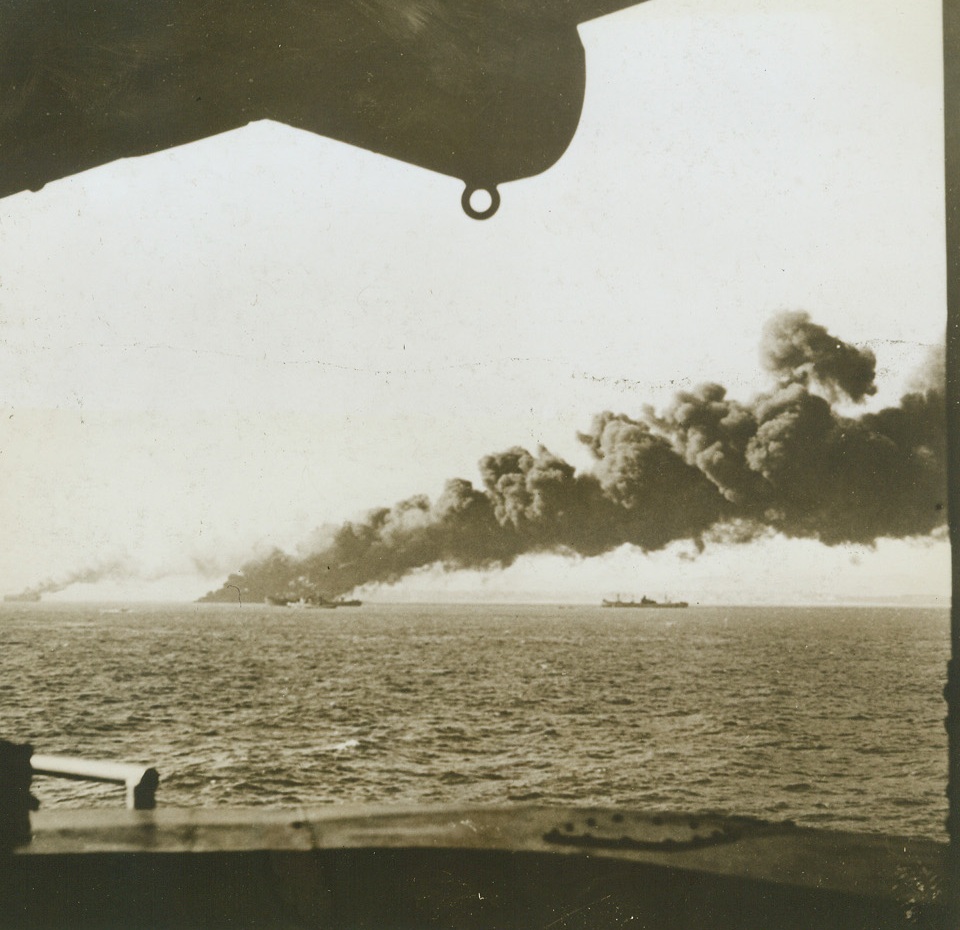 Axis Scores Hit on Sicily Invasion Vessel, 8/31/1943. SICILY—A photo, long delayed by censorship, shows a burning United Nations vessel that was hit by an enemy bomb during the invasion of Sicily. Other ships are unharmed by Axis aircraft that futilely attempted to break up the invasion. Figures have shown our losses to be relatively slight and this photo is of the “unusual," rather than being indicative of Allied shipping victims. Credit: ACME.; 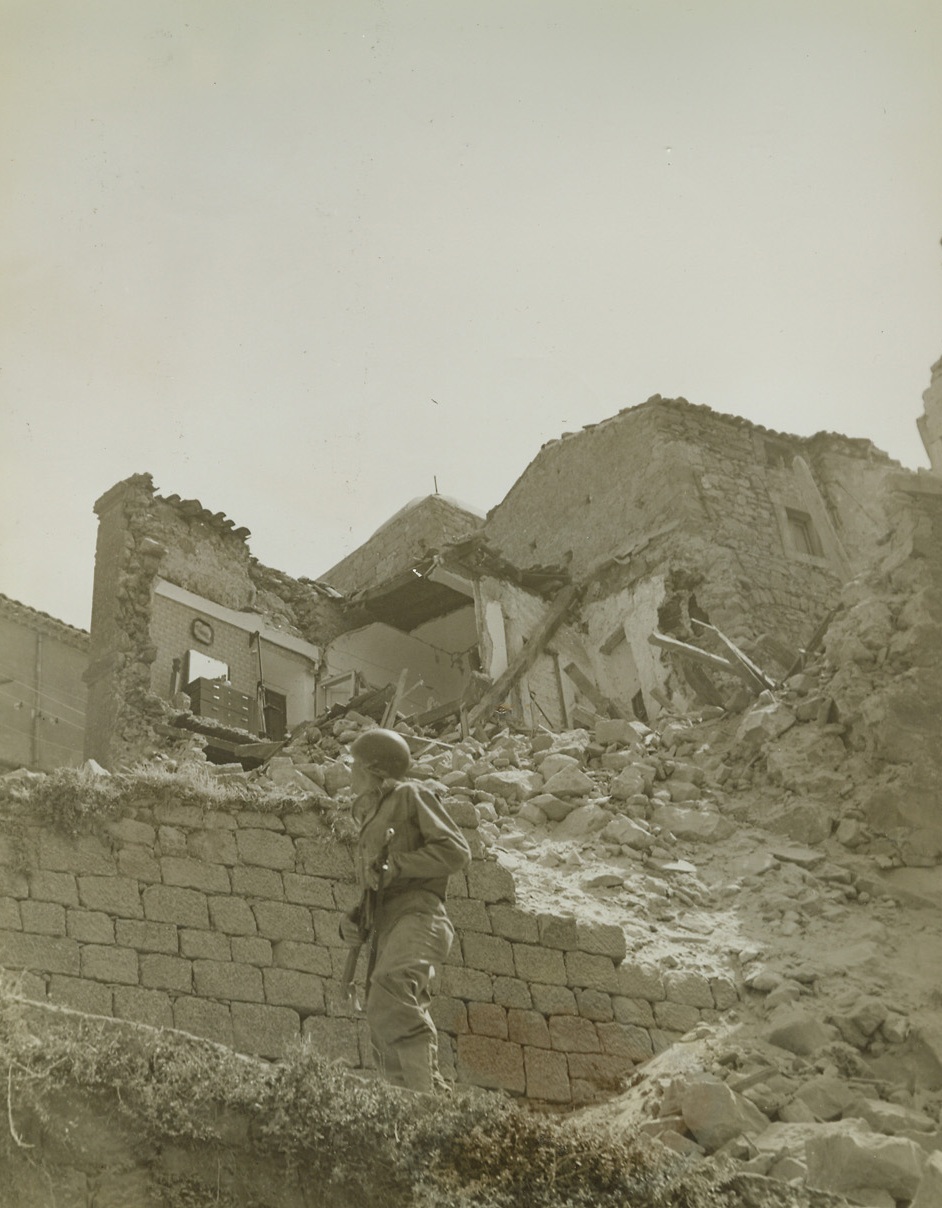 NO TIME FOR SENTIMENT, 8/14/1943. SICILY—To those given to contemplation, these jagged shells of the once peaceful homes of Troina, Sicily, present a sorry sight—mute evidence to the terrible destruction of this war which the Axis wished on itself—but to Pvt. William Saleski, Wilkes Barre, Pa., they are mighty good hiding places. He holds his gun ready as he watches for enemy snipers. Credit: Acme; 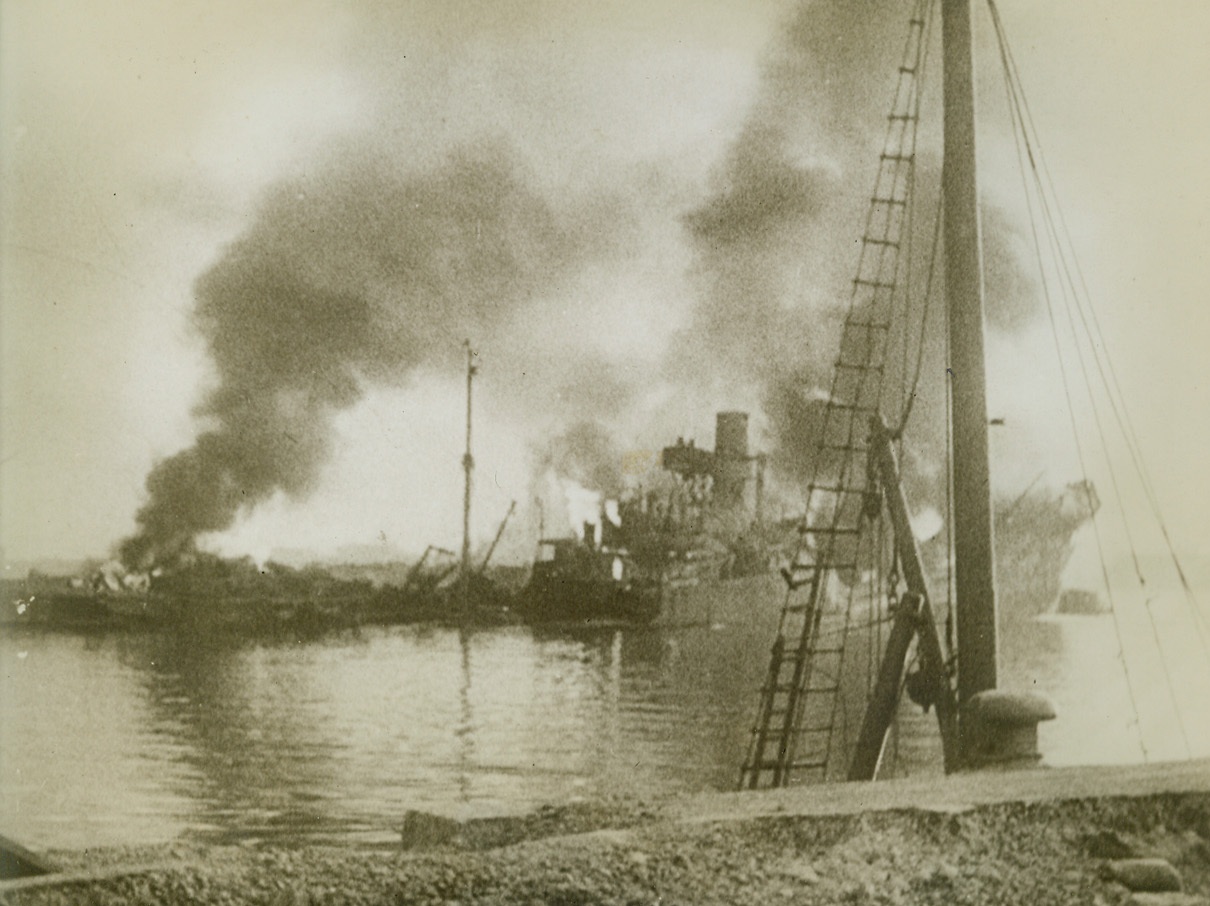 Allied Invasion…, 8/31/1943. ...this photo … until now by censors. This is one of the few vessels the Axis managed to hit in their inadequate attempt to prevent invasion. Credit (Signal Corps Photo from News of the Day Newsreel from Acme); 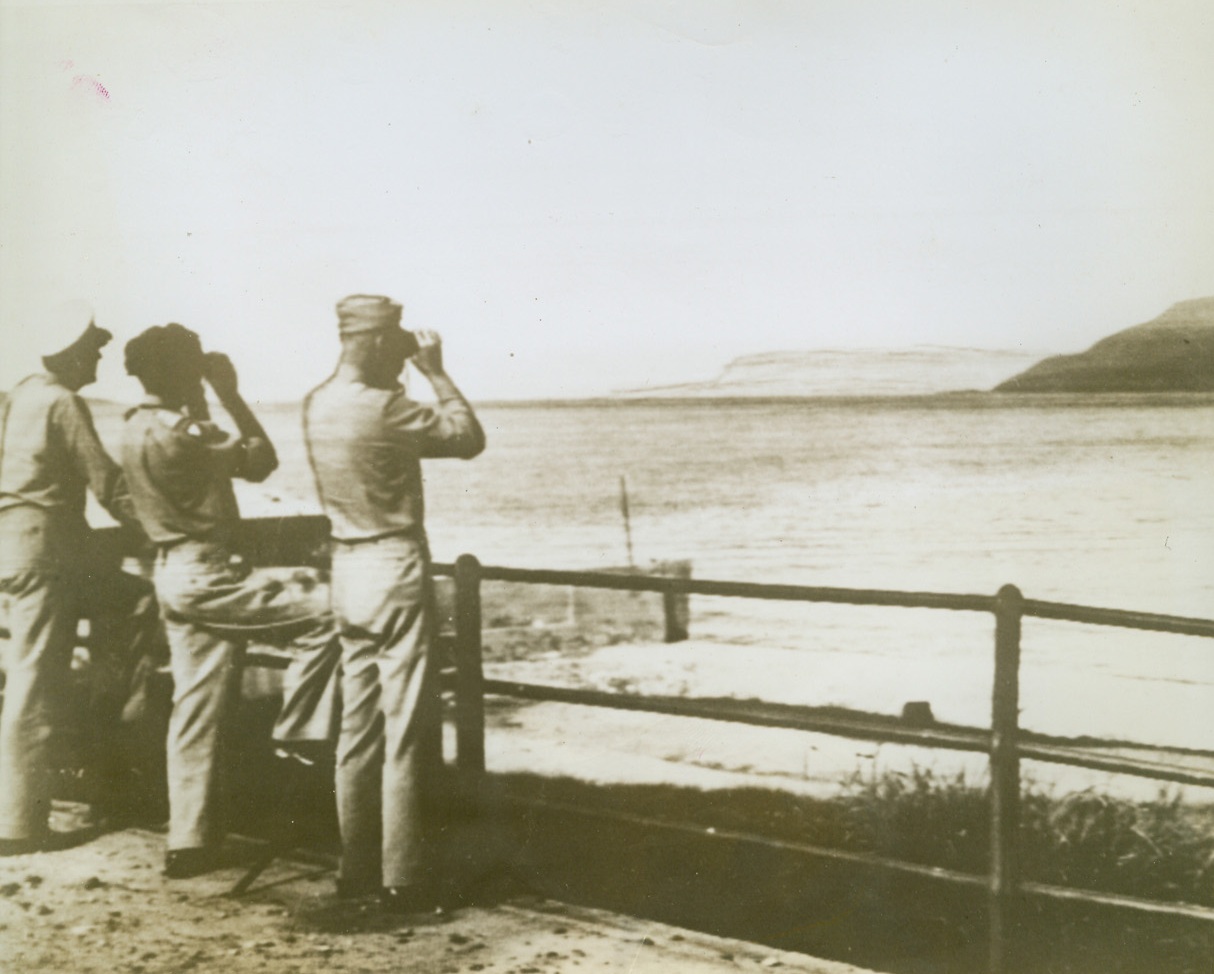 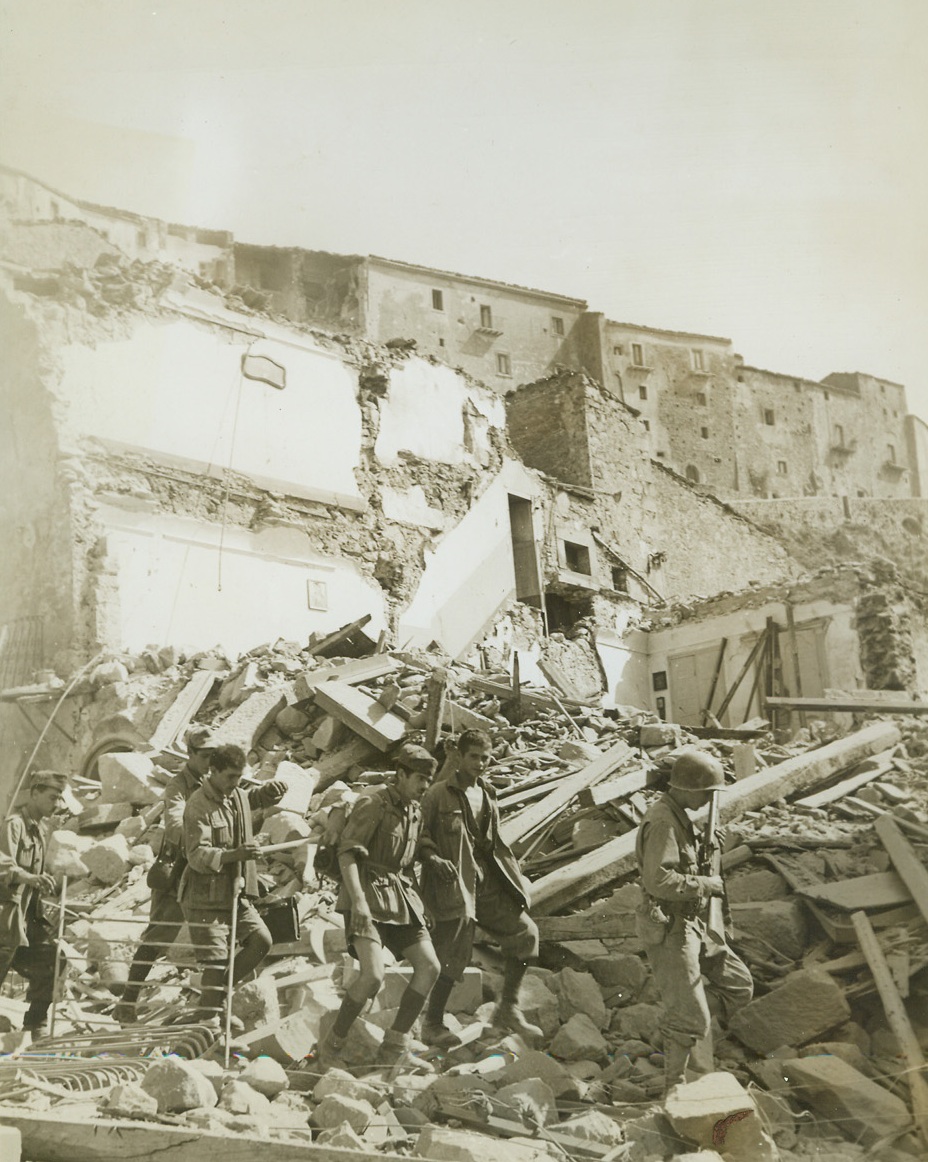 THE WAR IS OVER FOR THEM, 8/14/1943. SICILY—A U.S. soldier leads a group of captive Italian soldiers through the debris that clutters the streets of bomb-scarred Troina after our troops pushed the Axis out of the town. They are on their way to a temporary internment camp. Note the two pictures still hanging on the wall in the background. They are all that remain as evidence that the building was once a home. Credit: Acme; 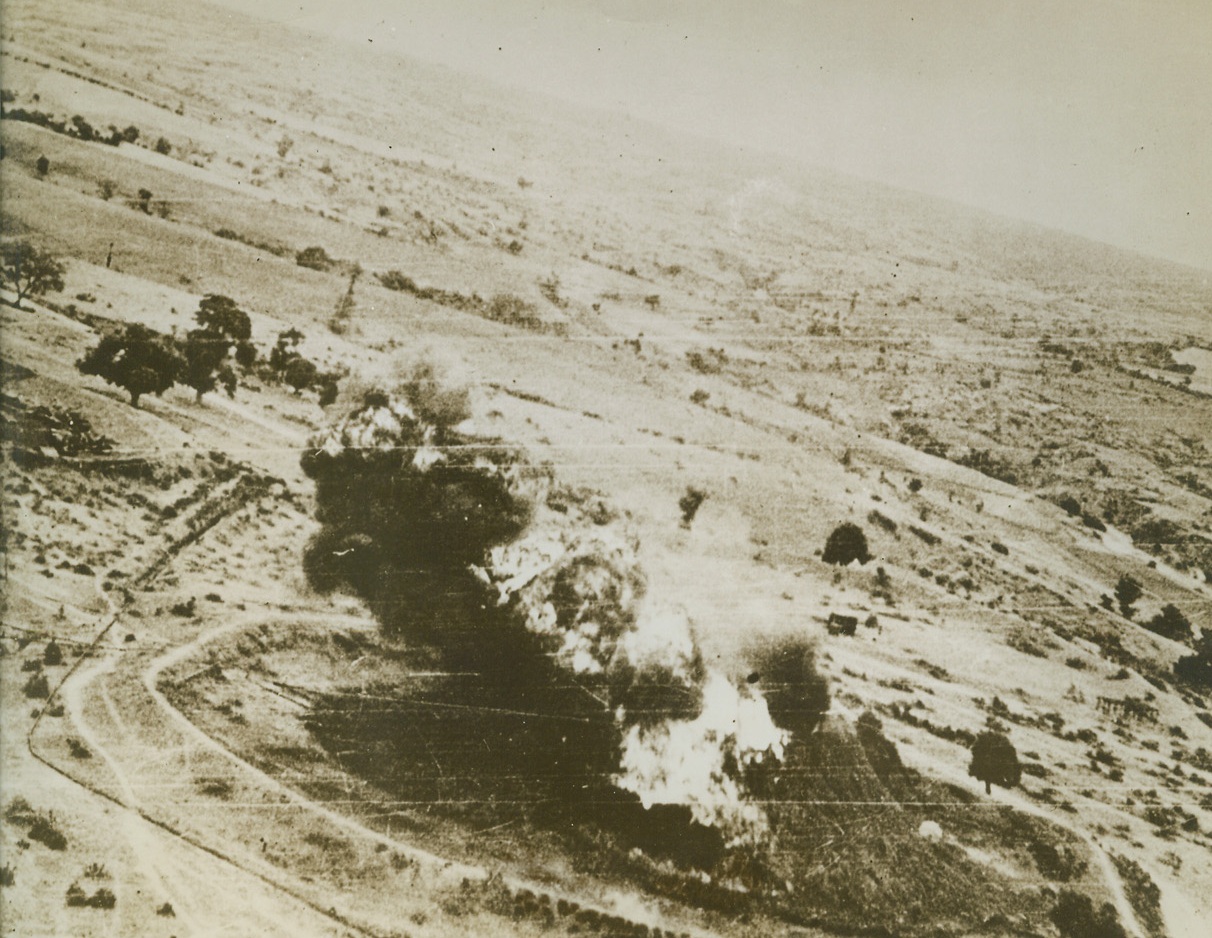 “HILL” GOES UP IN FLAME, 8/31/1943. YONANGYAUNG, BURMA—Cleverly camouflaged to look like a ill, this Jap oil storage tank at Sadaing Tank Farm, just south of Yonangyaung, goes up in roaring flames—failing to fool Beaufighters of the RAF during a recent raid. Five storage tanks stood on this site originally. Four were destroyed by the British on evacuation, but the fifth was only damaged. The Japs repaired the tank, filled it with a million gallons of oil from neighboring wells, camouflaged the tank, and got a nice, warm fire for their trouble. Credit: Acme; 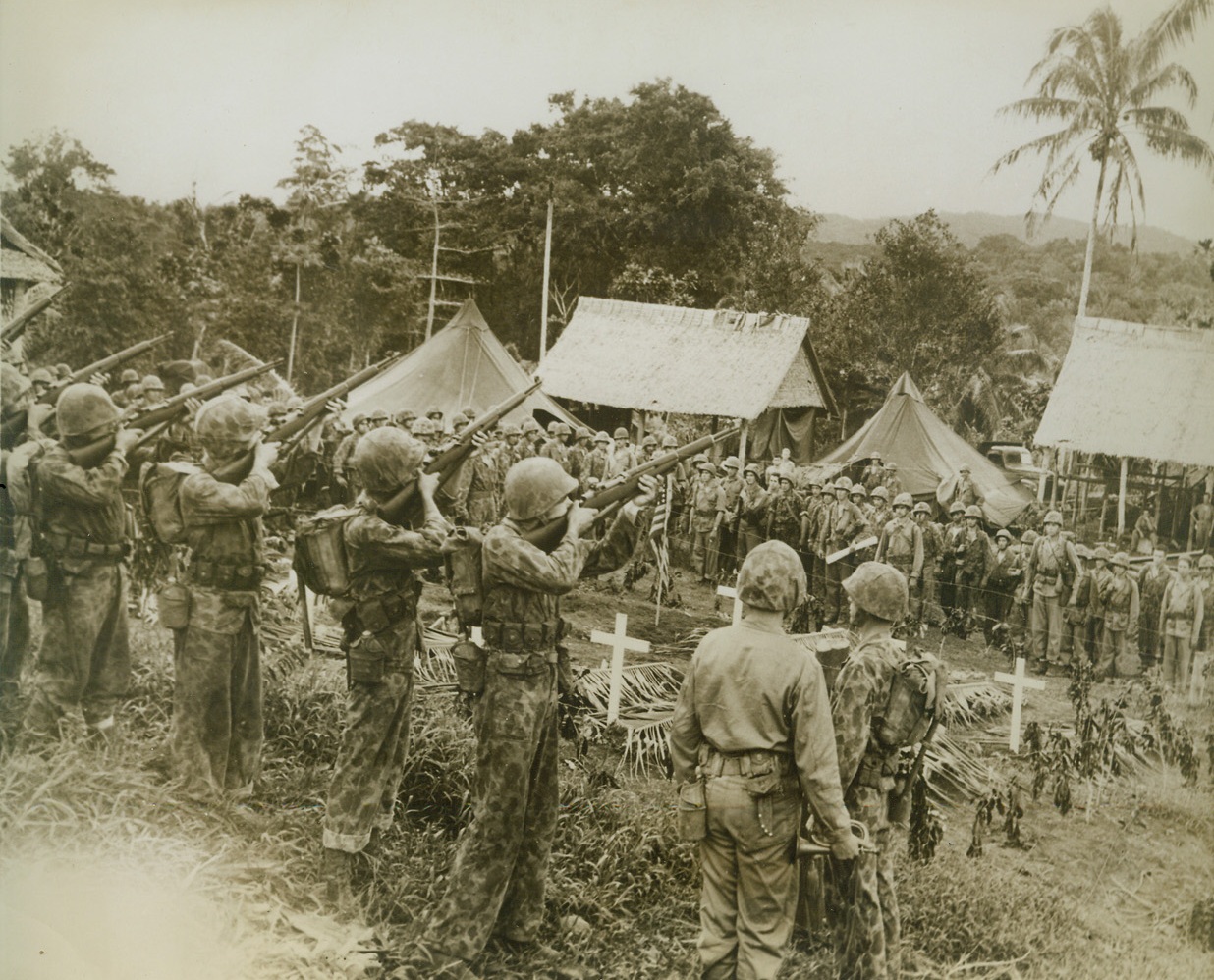 Leathernecks Honor Their Dead, 8/30/1943. New Georgia – Clad in camouflage suits, members of the U.S. Marine Corps pay tribute to buddies who lost their lives in action at Viru Harbor, New Georgia. In foreground the rifle squad stands ready to blast a salute to the fallen Marines, while a bugler waits to play the final “Taps”. Credit (U.S. Marine Corps photo from ACME); 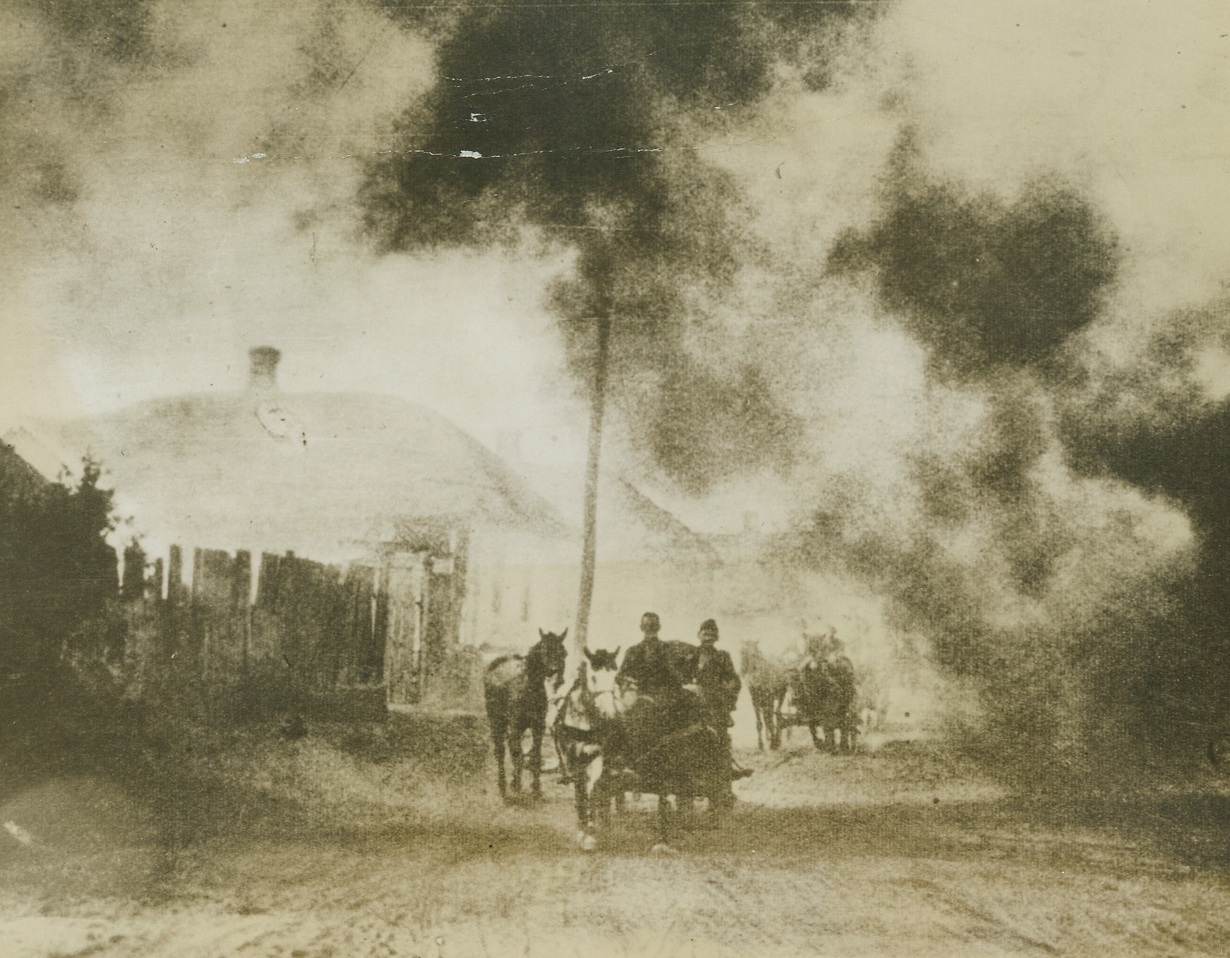 Retreating Through Fire, 8/30/1943. Russia—Through a trail of death and destruction of their own making, German reserves, in horse-drawn carts, move up to the front line on the Dnieper Bend. They pass through a small Russian village, set afire by some of the retreating Nazis before them. Photo has just been received from London, obtained through a neutral source. Credit: ACME; 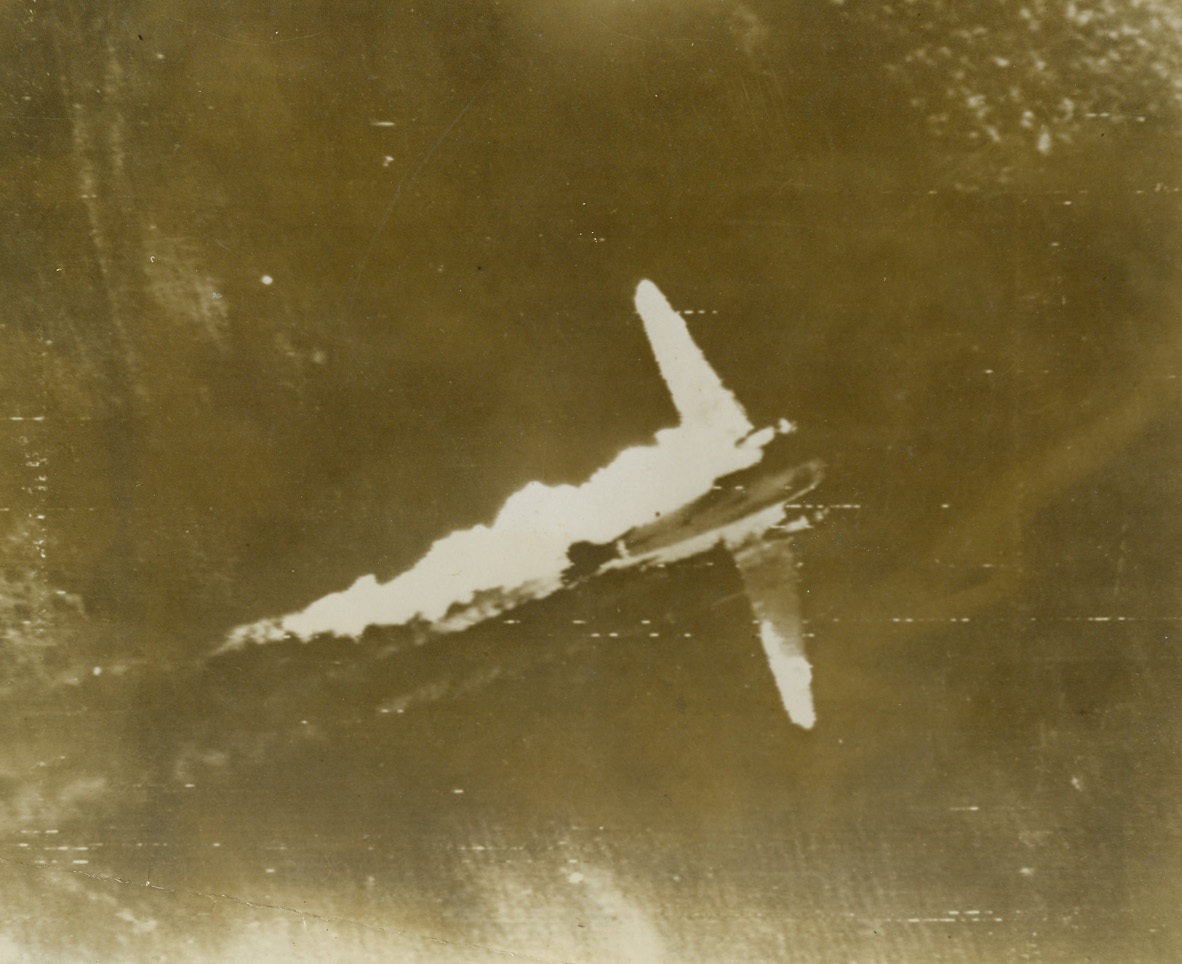 They Never Got There. 8/31/1943. Carrying a group of Jap officials to Makassar, this Jap plane never reached its destination. The armed plane crashes in flames near Pomela, in the Celebes, after meeting up with an American Liberator. Captain Augustus V. Connery of East Providence, R.I., and S/Sgt. John W. Tackett of Los Angeles, Calif., sent the transport, which resembles a Douglas DC-3, to its doom. Credit: U.S. Signal Corps radiotelephoto-ACME.; 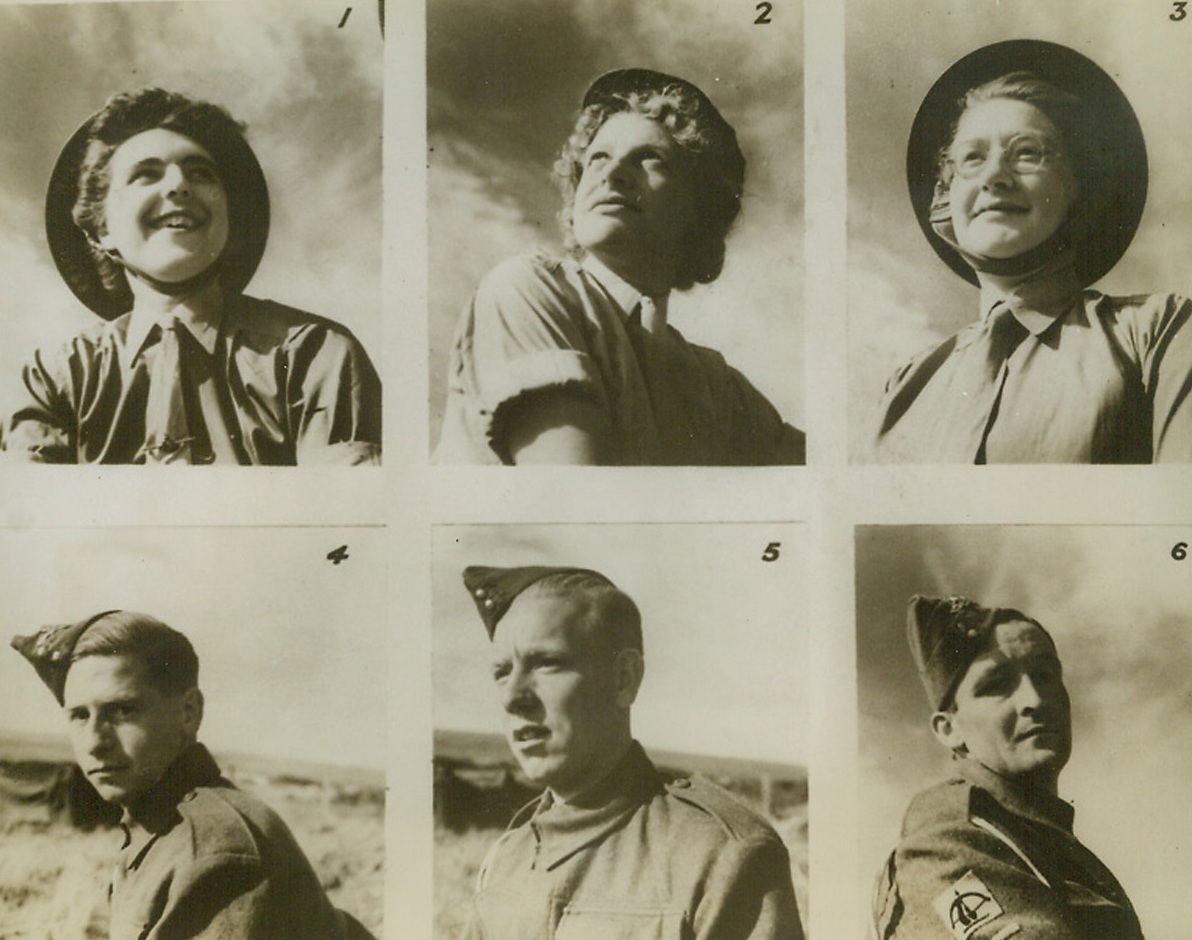 Mixed Ack-Ack Crew Claims Record Kill, 8/31/1943. England—Manning an ack-ack gun, this “mixed crew” scored a direct hit on a new-type German reconnaissance plane, flying at 36,000 feet, and brought it down in the south of England. Believed to be a ME.109G, it was the first plane of its kind to crash in England. Left to right: (top) Pvt. Rose Rales, spotter on the gunsite; Pvt. Leile Druety, on the predictor; Pvt. Mary Kitts, on the radiolocation apparatus; (bottom) Gunner Thomas Allsopp; Gunner Earnest Greatrex; and Gunner Wilfred Owen. Credit: ACME.; 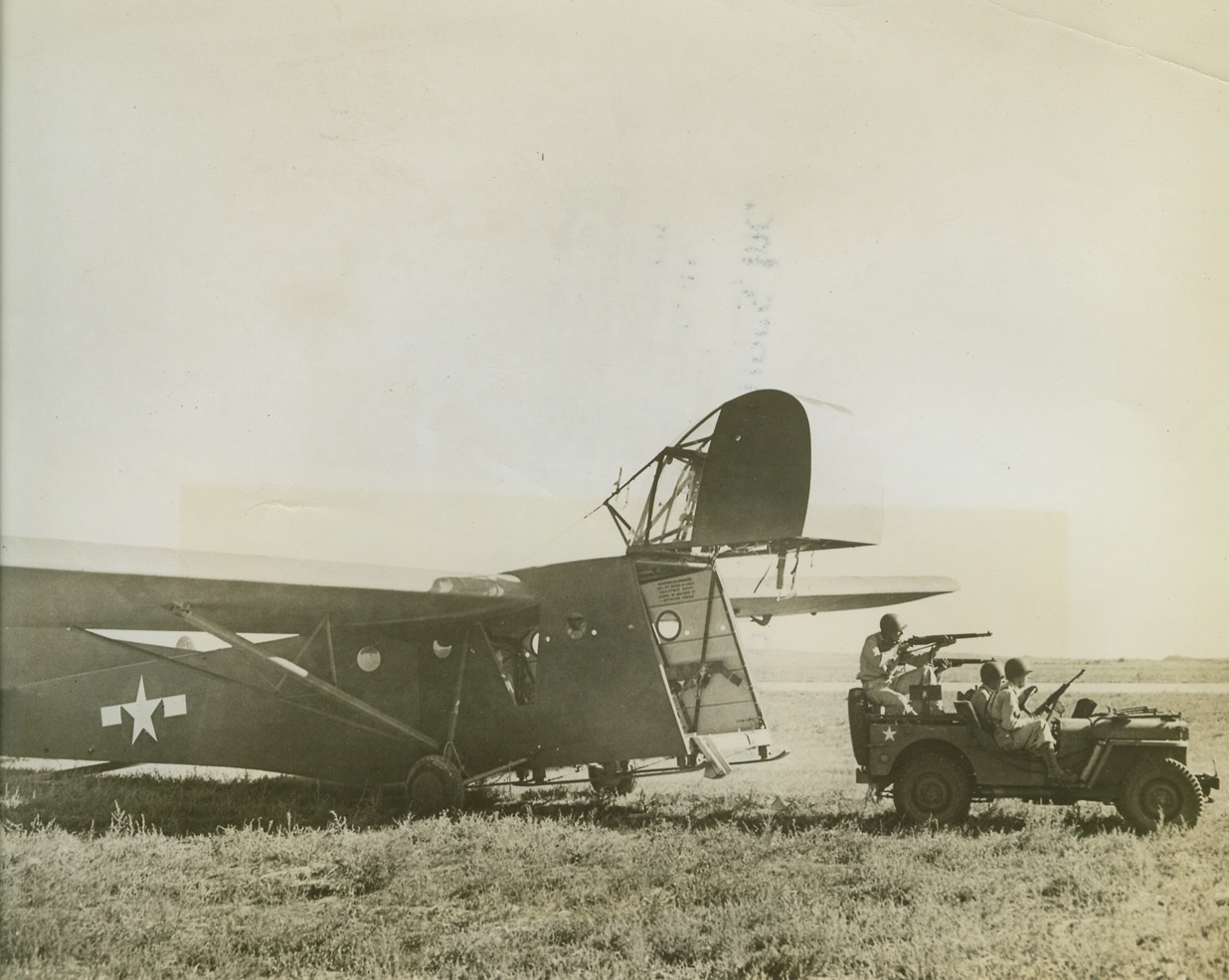 War Show Dedicates New Army Base, 8/23/1943. Alliance, Nebraska -- Air-borne Jeeps and Howitzers, men and machines of war, filled the air over the army air base at Alliance, Nebraska, as nearly 60,000 persons gathered to watch the war games and display of military might which marked the formal opening of the new field under command of Lt. Col. D. Arthur Walker. The base is operated by the 1st Troop Carrier Command of Stout Field, Indianapolis, Indiana, with troop carrier units, parachute infantry, glide infantry and air-borne engineers located there. This photo shows a glider-borne Jeep ready for the “invasion.” Credit: ACME; 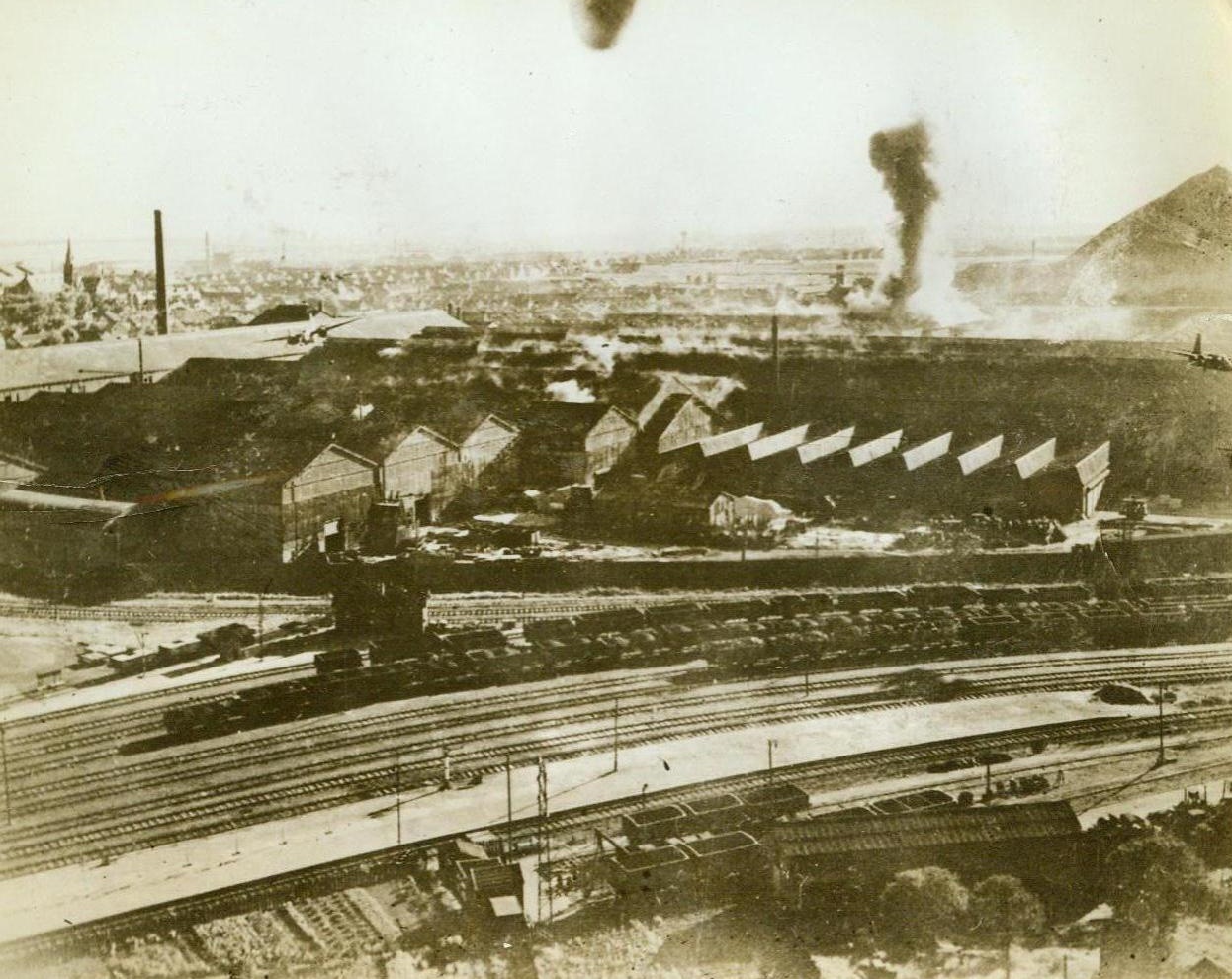 Boston Bombers In Action, 8/29/1943. Denain, France - With a smoke plume rising behind them as a bomb finds its mark, two Boston Bombers (to left and right of photo) of the RAF Fighter Command fly low over their objective, the important steel and armament works of the Societe Francaise De Construction Mecaniques and of the S.A. Des Hautes Forneaux Forges Et Acieres. The plants, which lie close together about five miles southwest of Valenciennes, were attacked from levels ranging from 50 to 1500 feet on August 16th. Although the industrial targets suffered heavy damage, destruction to residential property in the neighborhood was very light. Credit: ACME;