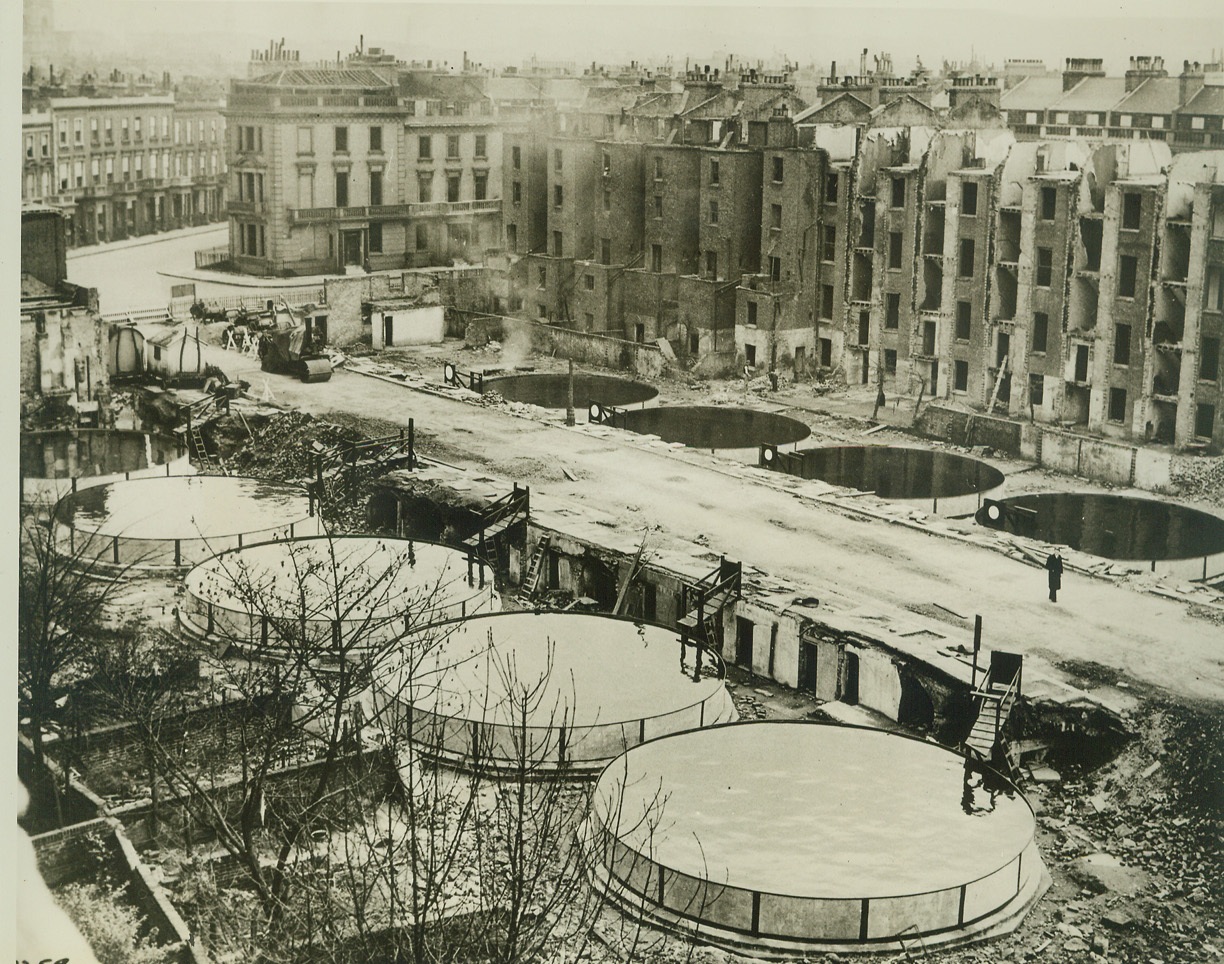 Emergency Water Tanks Built in London, 12/9/41 LONDON, ENGLAND -- Nine huge water tanks built on the sites of bomb-destroyed buildings in London, for use of firefighters, should water mains fail. In some instances, the basements of destroyed buildings are filled with water for the same purpose, after debris is cleared away. Note shells of gutted dwellings in right background. This picture just arrived here by Clipper. Credit: (ACME); 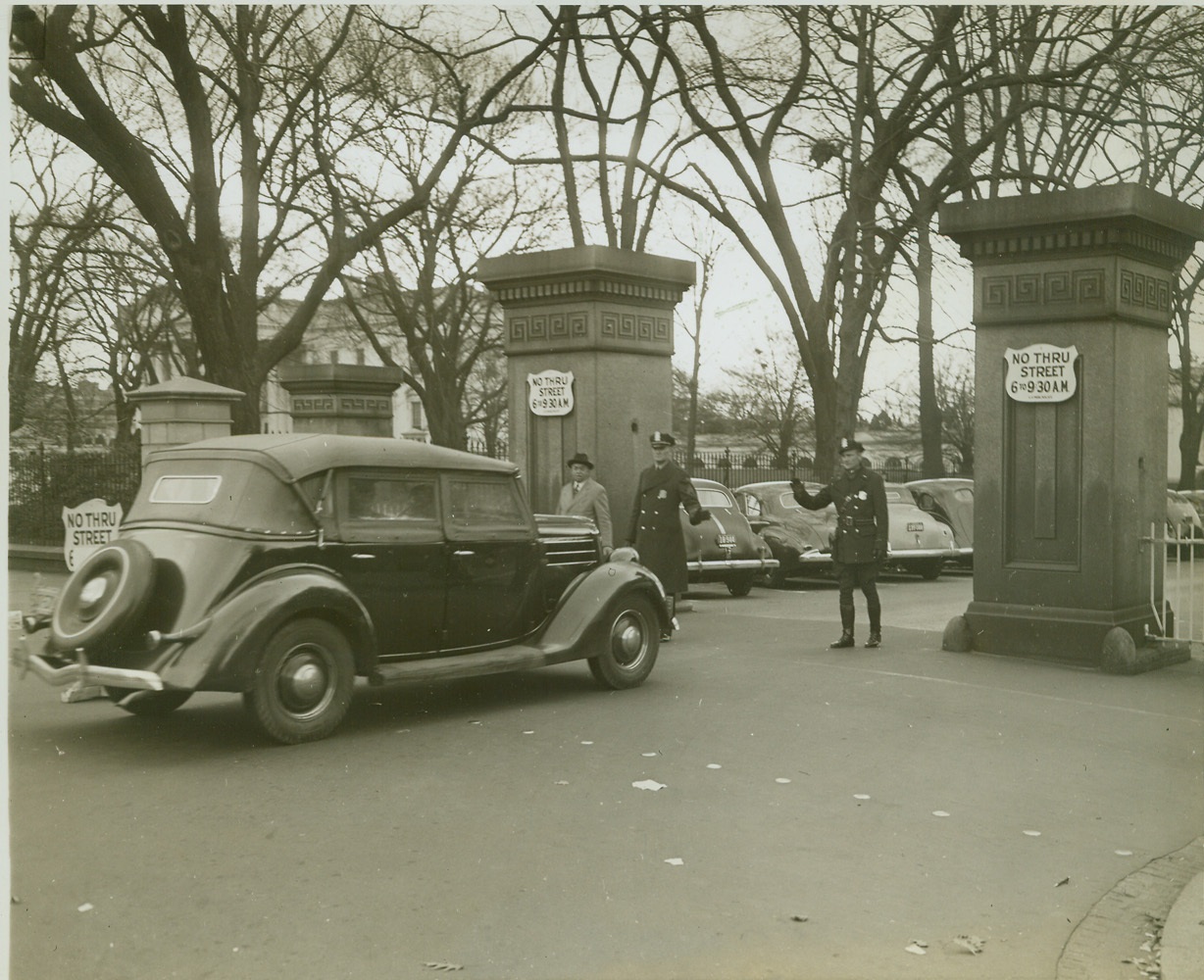 Traffic Routed Around White House, 12/9/41 Washington, D.C.—Streets circling the White House grounds have been blocked off and all cars seeking entrance are stopped for inspection. Only those on official business are permitted to enter. Photo shows metropolitan police on guard at the west executive barrier (West Executive Avenue) halting a motorist, Dec. 9. White House is shown in left background. Credit: ACME.; 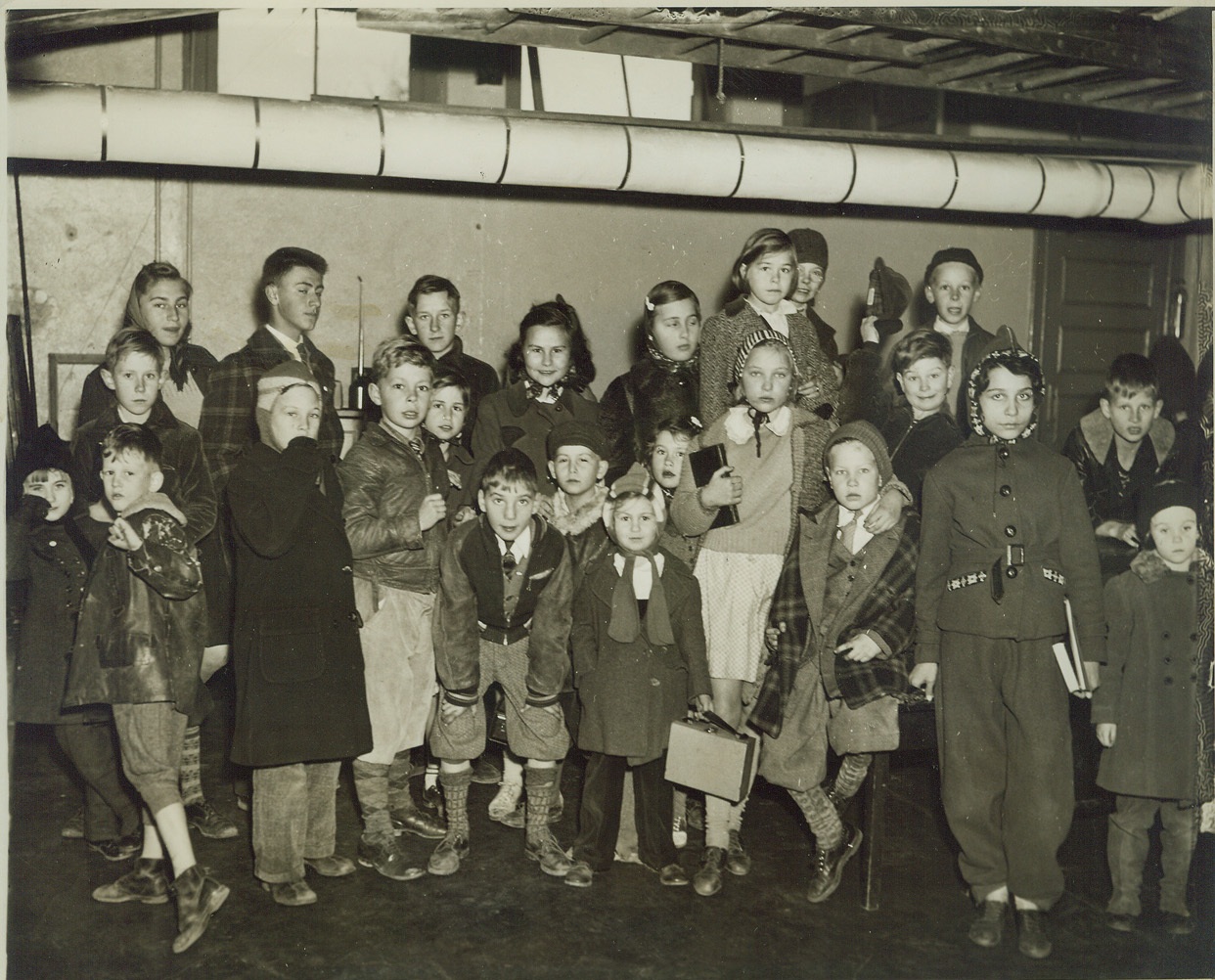 SCHOOL BASEMENT “SHELTER” FOR CHILDREN, 12/9/41 HEMPSTEAD, N.Y.: These youngsters, principally children of non-commissioned officers at Mitchell Field, were herded into the basement of the Washington School, Washington Street and Van Cott Avenue, when an air raid alarm was sounded, December 9. Women and children have been evacuated from Mitchell Field, which made it necessary to keep these youngsters in school while others were sent home in orderly manner. War Department officials later said the alarm resulted from a “phony” tip. Credit: OWI Radiophoto from ACME; 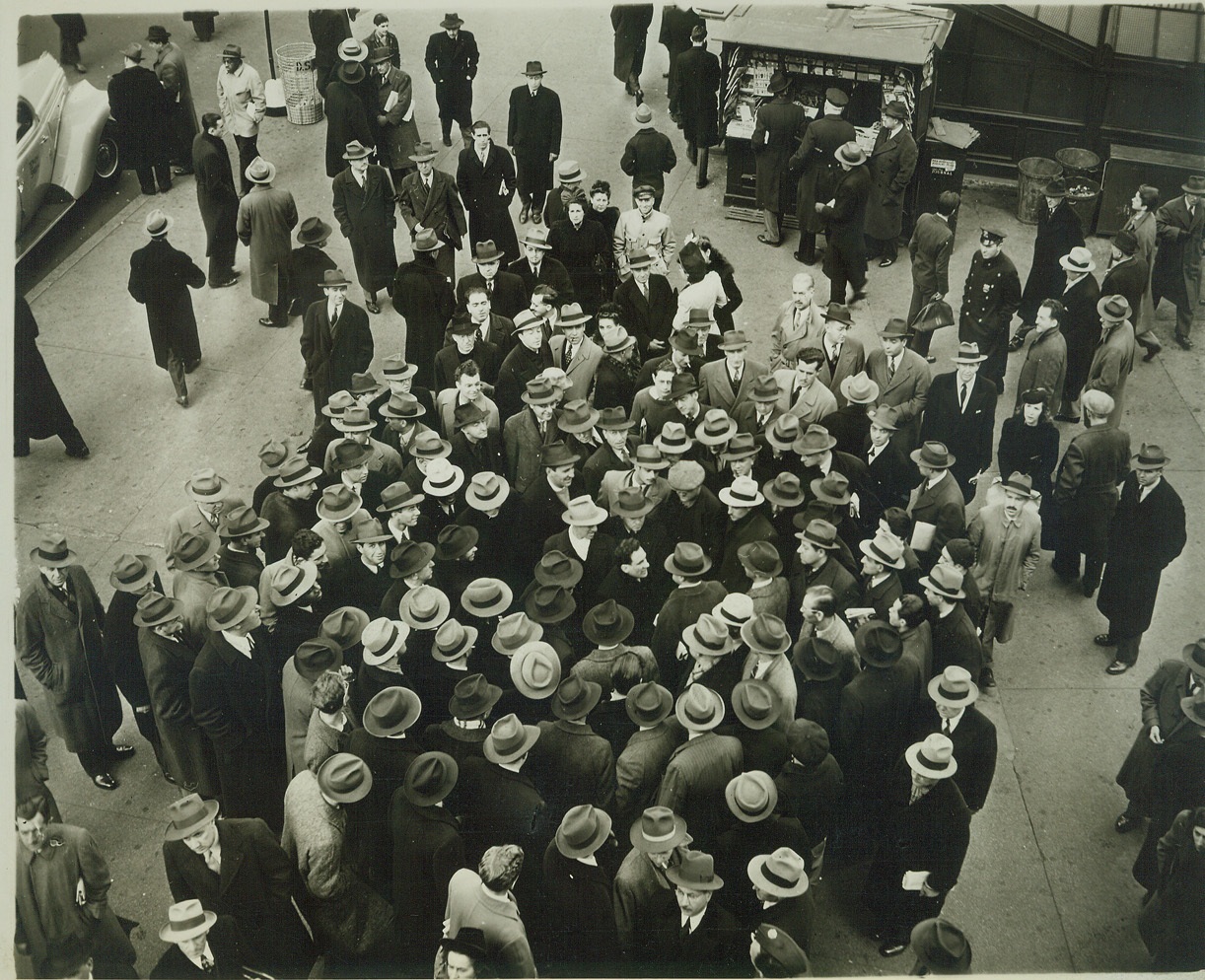 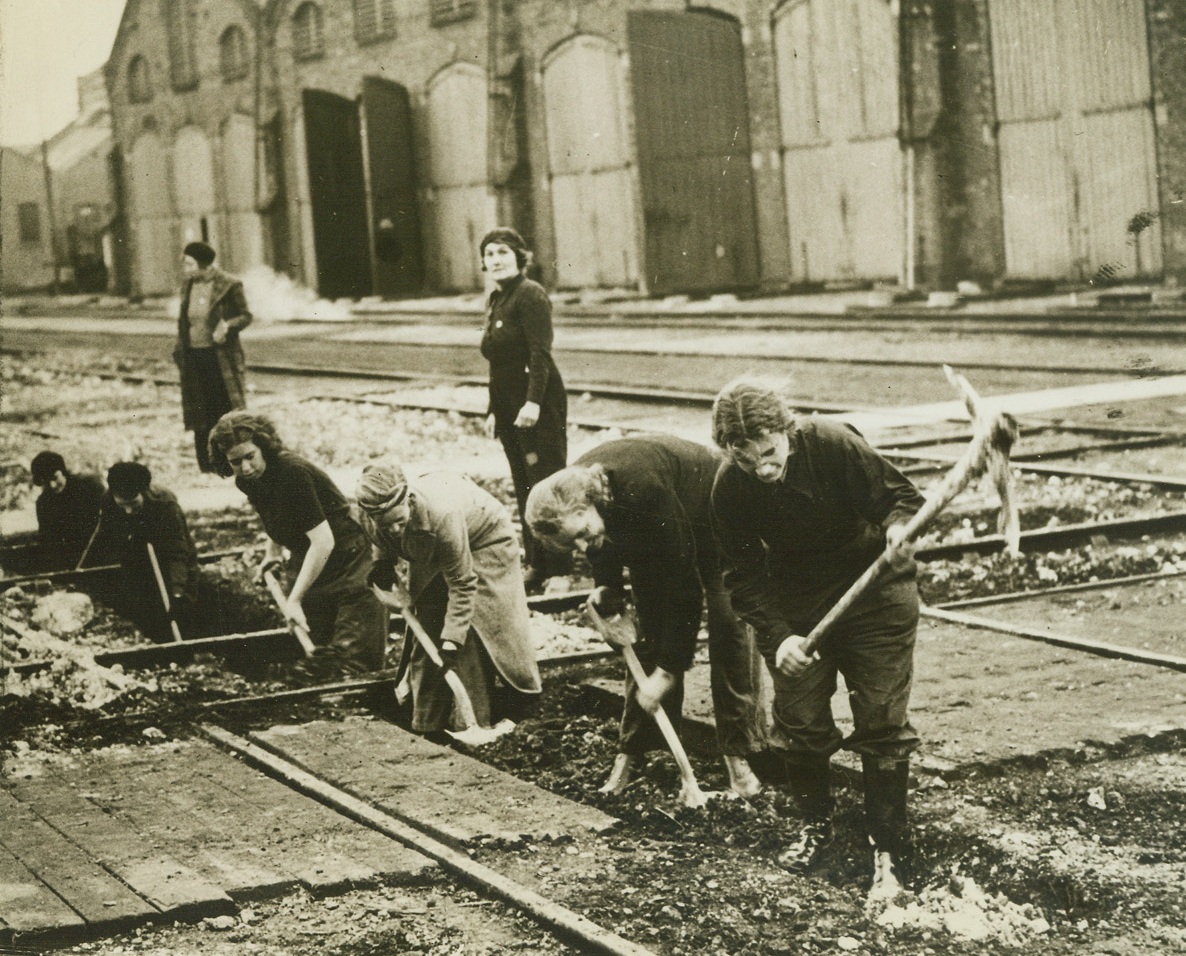 Women’s Pick and Shovel Gang Lays Power Cable, 12/9/41 Southern England – Women swing picks and heft shovels, digging trenches and laying a power cable at a Southern Railway Depot in England. England’s acute shortage of manpower has caused officials to ask women to volunteer for this work. The English censor’s caption on the photo remarks, “The work is said to be as good and to be proceeding even quicker than under normal conditions with men worker.” Credit: ACME; 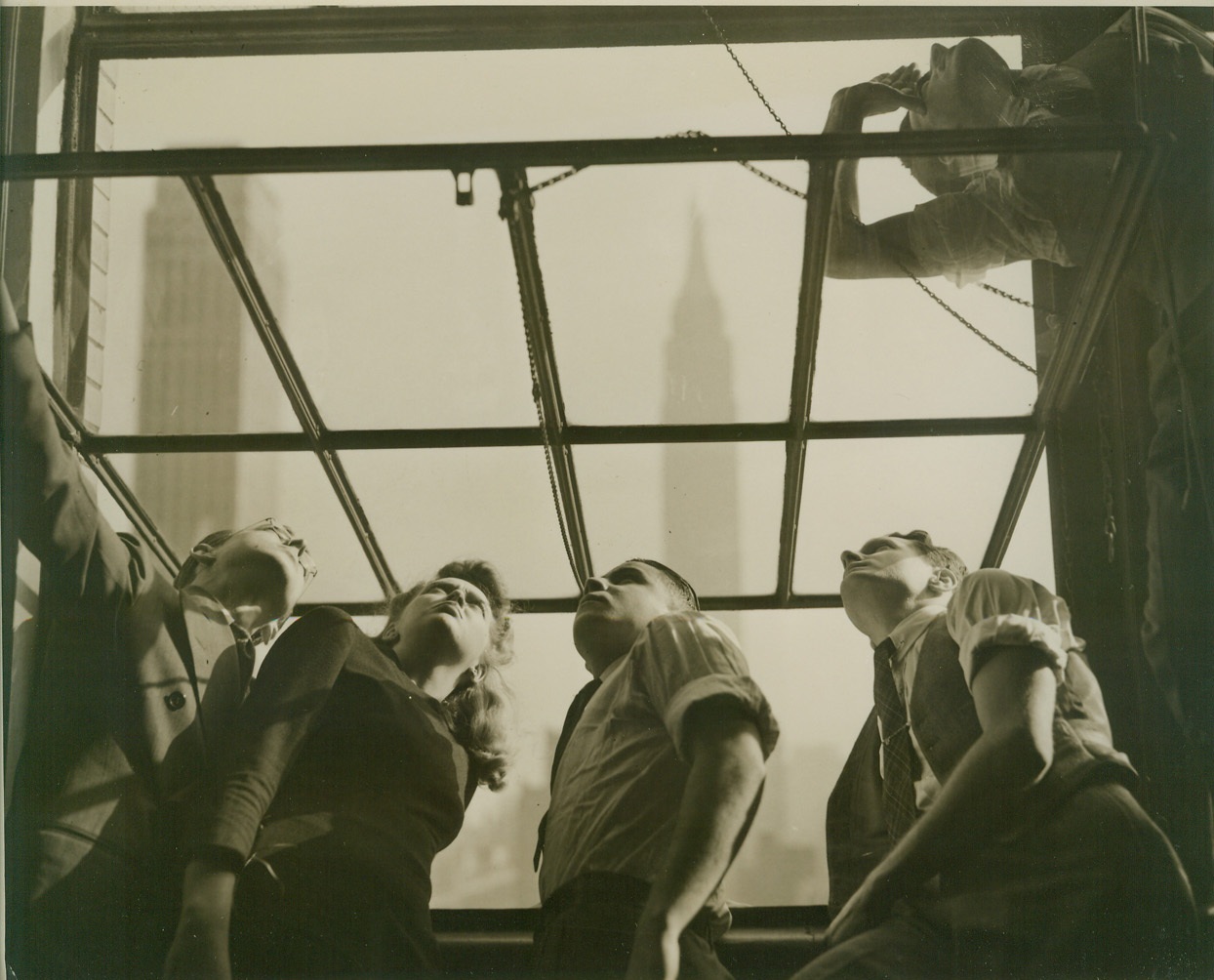 LOOKING FOR INVADERS, 12/10/41 NEW YORK – This morning (Dec. 10) air raid sirens started blowing in this city. Office workers, having just arrived at their place of employment in midtown, scampered to the window and peered skyward, looking for enemy planes. The alarm was shortlived, however, the all clear being announced within a few moments. Directly in the background can be seen the World’s Tallest Building – The Empire State Bldg. Credit: OWI Radiophoto from ACME; 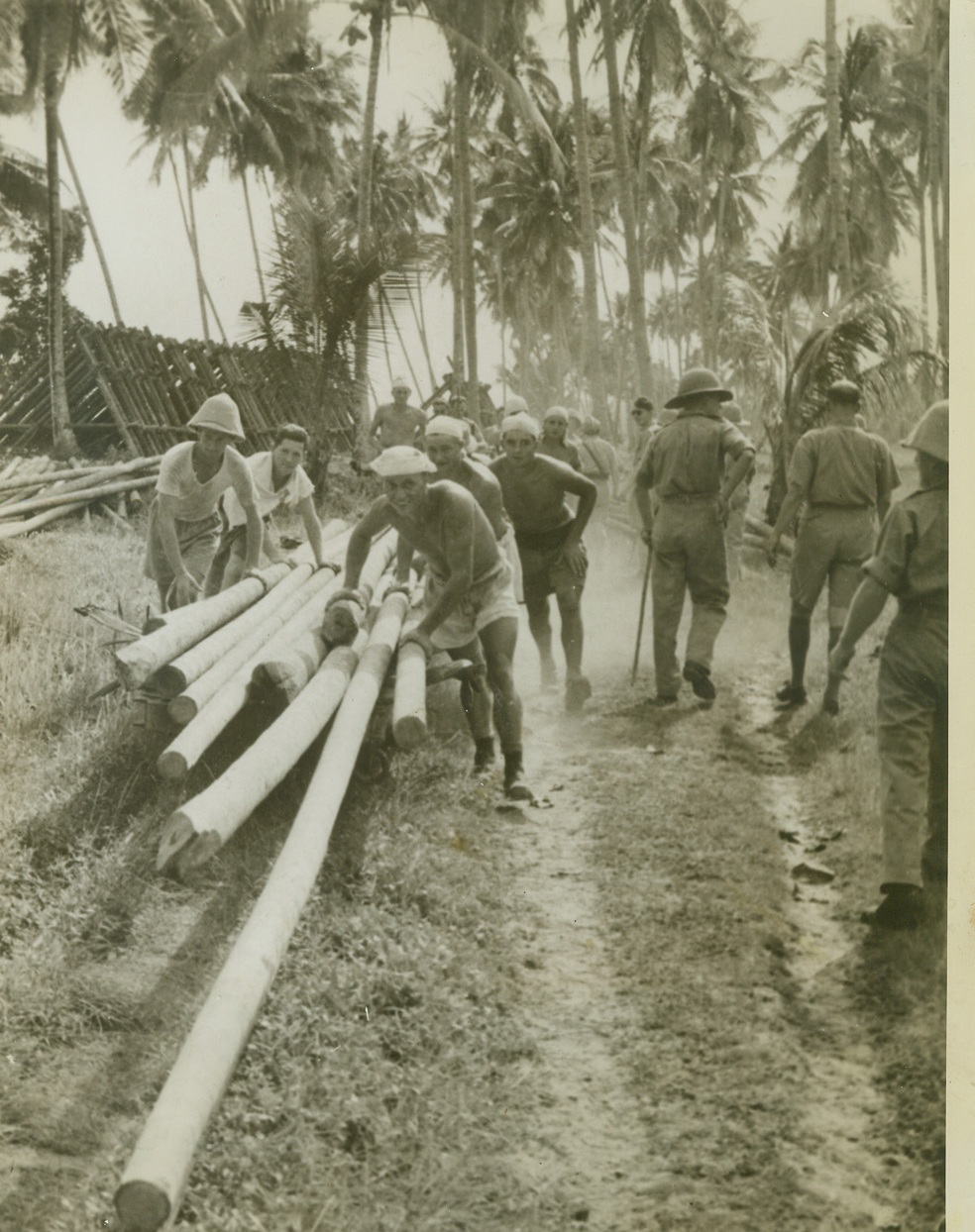 They’re Fighting for Britain, 12/11/41 Malaya – Men of a battalion of the Gordon Highlanders carry out construction work in the tropical jungle. Yesterday British and Malayan troops fought Japanese on the beaches of Malaya, some 200 miles North of Singapore. Credit line (ACME); 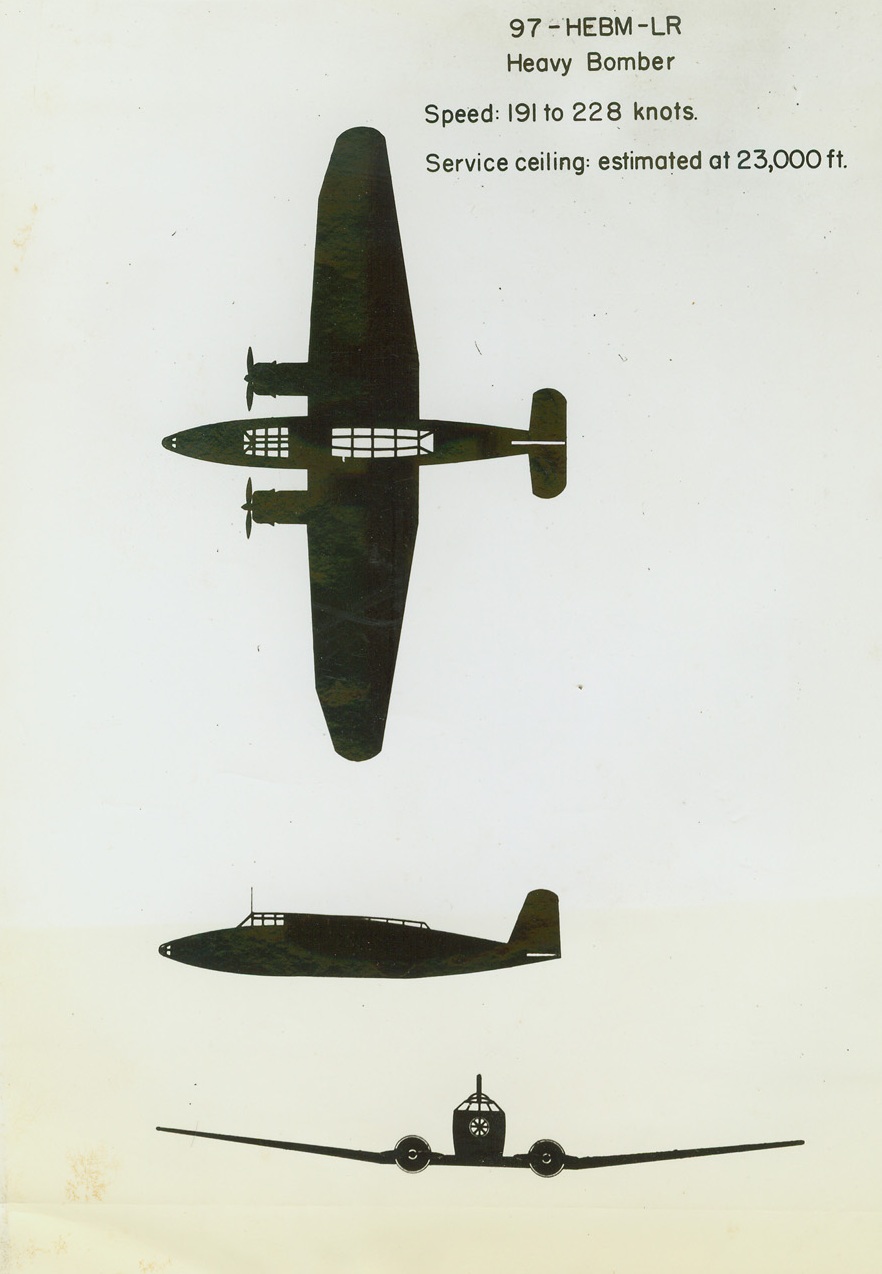 Japanese Wings Over the Pacific, 12/15/41 Washington – To Army and civilian observers in the Pacific area this may be a familiar sight by now: It’s a heavy Japanese Bomber in three silhouette views, and is included in a pamphlet issued by the Navy Department for the information of Civilian Defense Personnel. This Bomber has an endurance of 10 hours, carries four .30 caliber machine guns and a bomb load of 3,300 pounds. Credit: ACME; 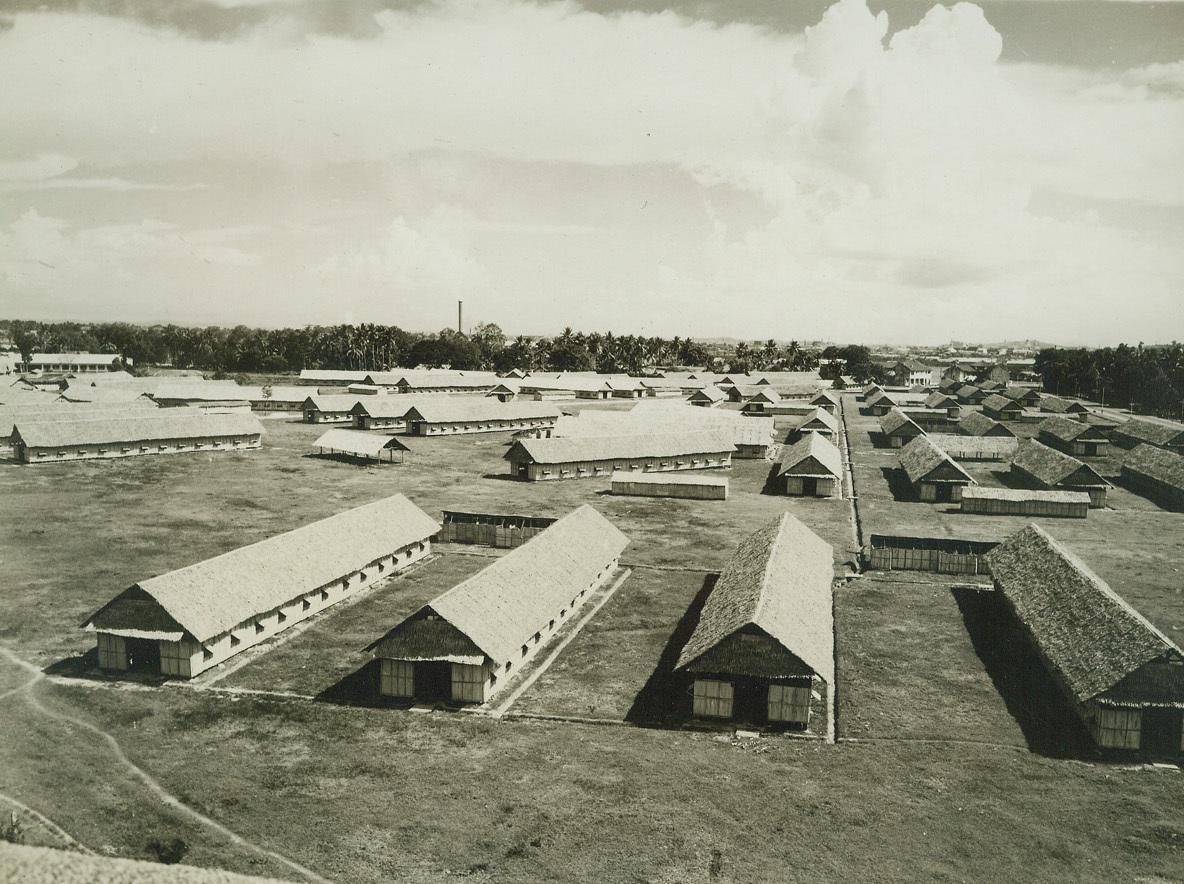 SINGAPORE CITIZENS READY FOR JAP BOMBERS, 12/16/41 SINGAPORE STRAITS SETTLEMENTS—A make shift evacuee village, one of several built inland near Singapore, to receive coastal citizens, when and if the Singapore Island is bombed by Japanese planes. Due to the fact that Nipponese troops have landed North of the island, in Malaya, this attack may come at any minute. Although these shelters are built of Bamboo and matting fibre, and are tinder to incendiary bombs, they are spaced far apart, so that if one is ignited, the others my be saved.Credit: ACME.; 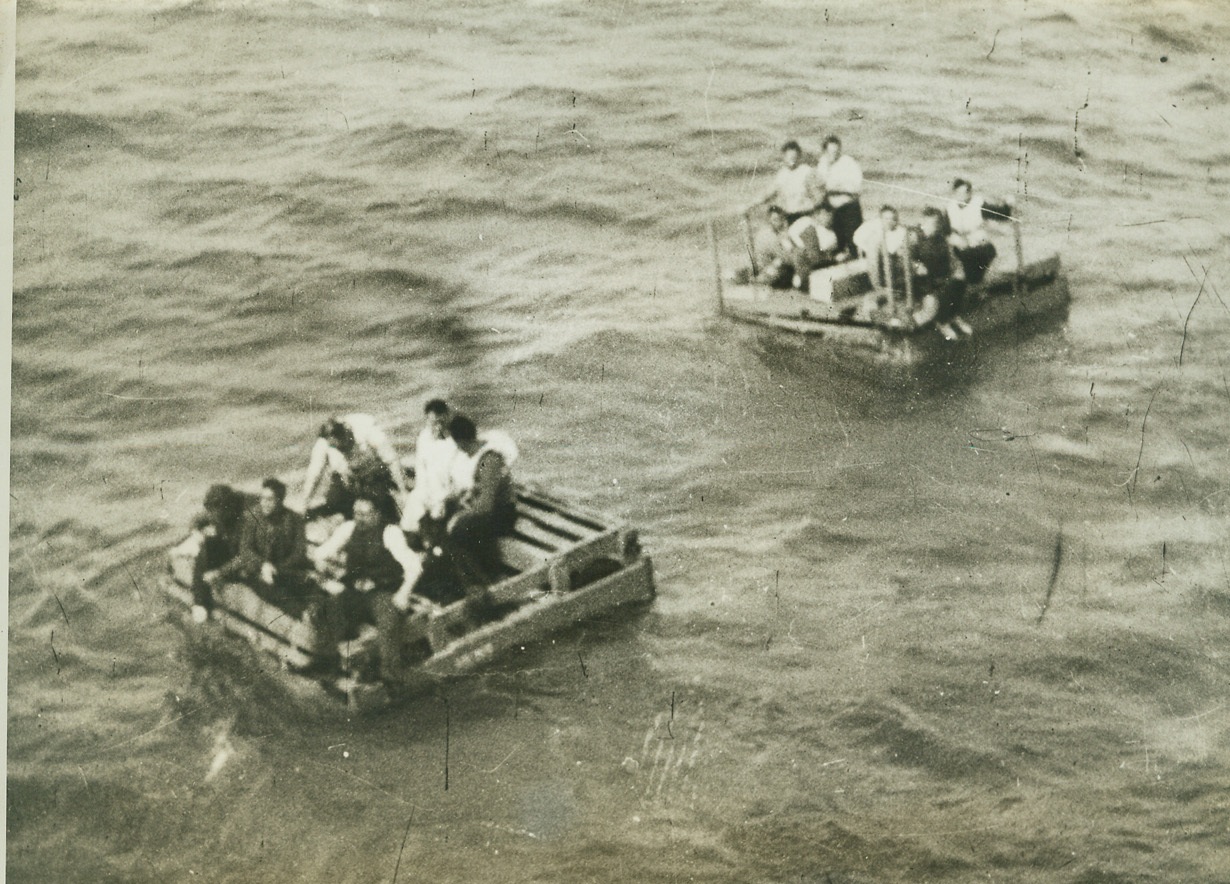 ATLANTIC HORROR STORY (4), 12/27/41 A war-time horror story comes from mid-Atlantic, where according to British reports a British rescue ship, her sick bays jammed with injured survivors of merchant vessels sunk by U-boats while traveling in one convoy , was bombed by a German plane, set afire, and lost. When uninjured or not badly injured men tried to carry their seared or shattered companions across the red-hot decks to the lifeboats, the British report continues, the German plane machine-gunned them and sank their boats under them. Those who were able to escape were saved by a British warship which had raced to the aid of the stricken rescue vehicle. The account says tersely that the attacking plane was torn to bits by gun-fire. There were no survivors. Here two rafts of men who escaped from the blazing ship wait for their rescuers to pick them up. (Passed by British censor). Credit: ACME; 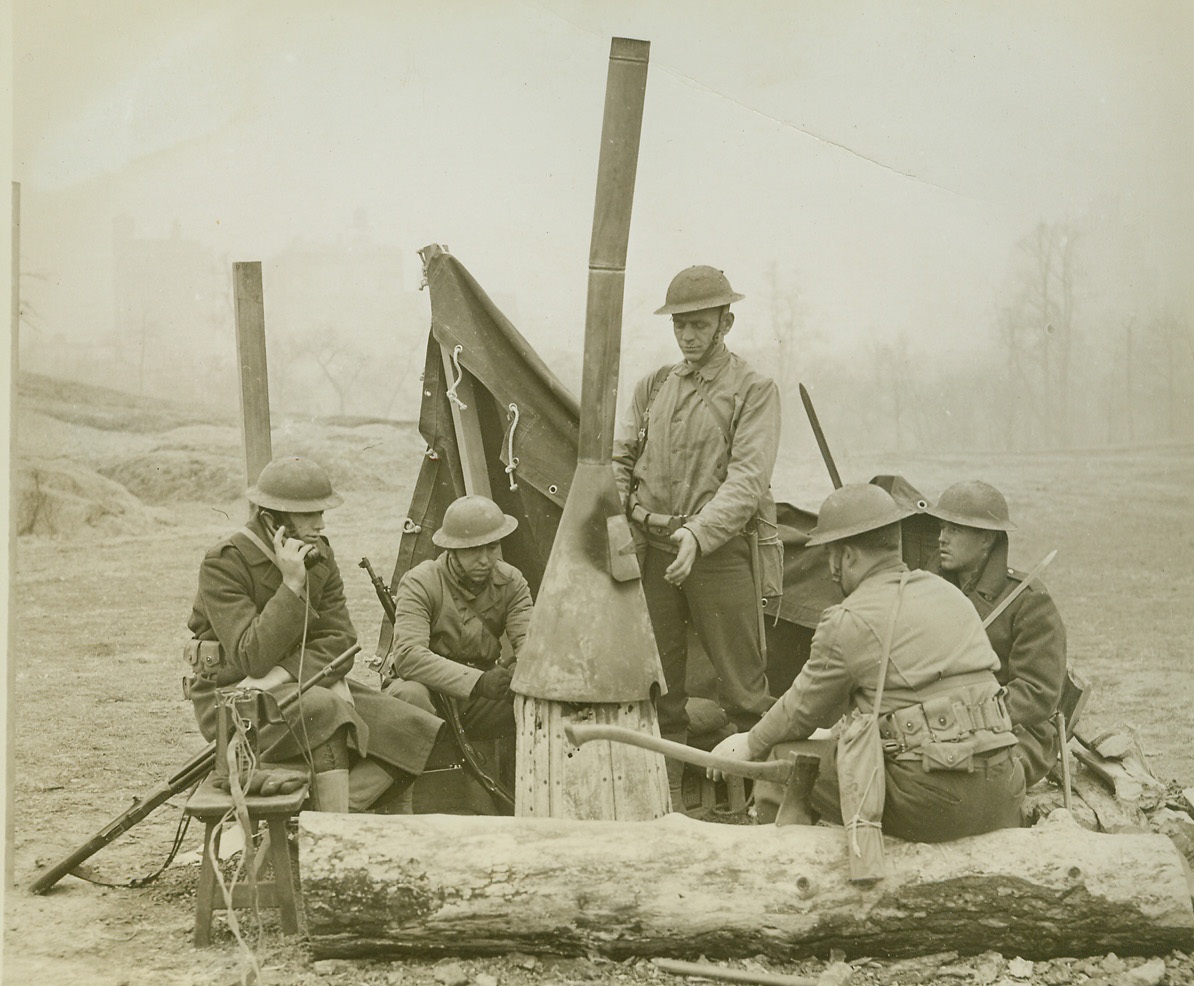 Air Raiders will find New York City Prepared, 12/29/41 NEW YORK, N.Y. – Should any enemy aircraft attack New York City, they will find it prepared. Photo above shows anti-aircraft gun crew around stove in a city park, where they are on 24-hour watch. Note signalman at field telephone, which is connected with headquarters and over which any air raid alarm would be sent. Because of Army censorship background and all identifying marks have been blacked out so that location of this emplacement will not be revealed. Credit: (ACME); 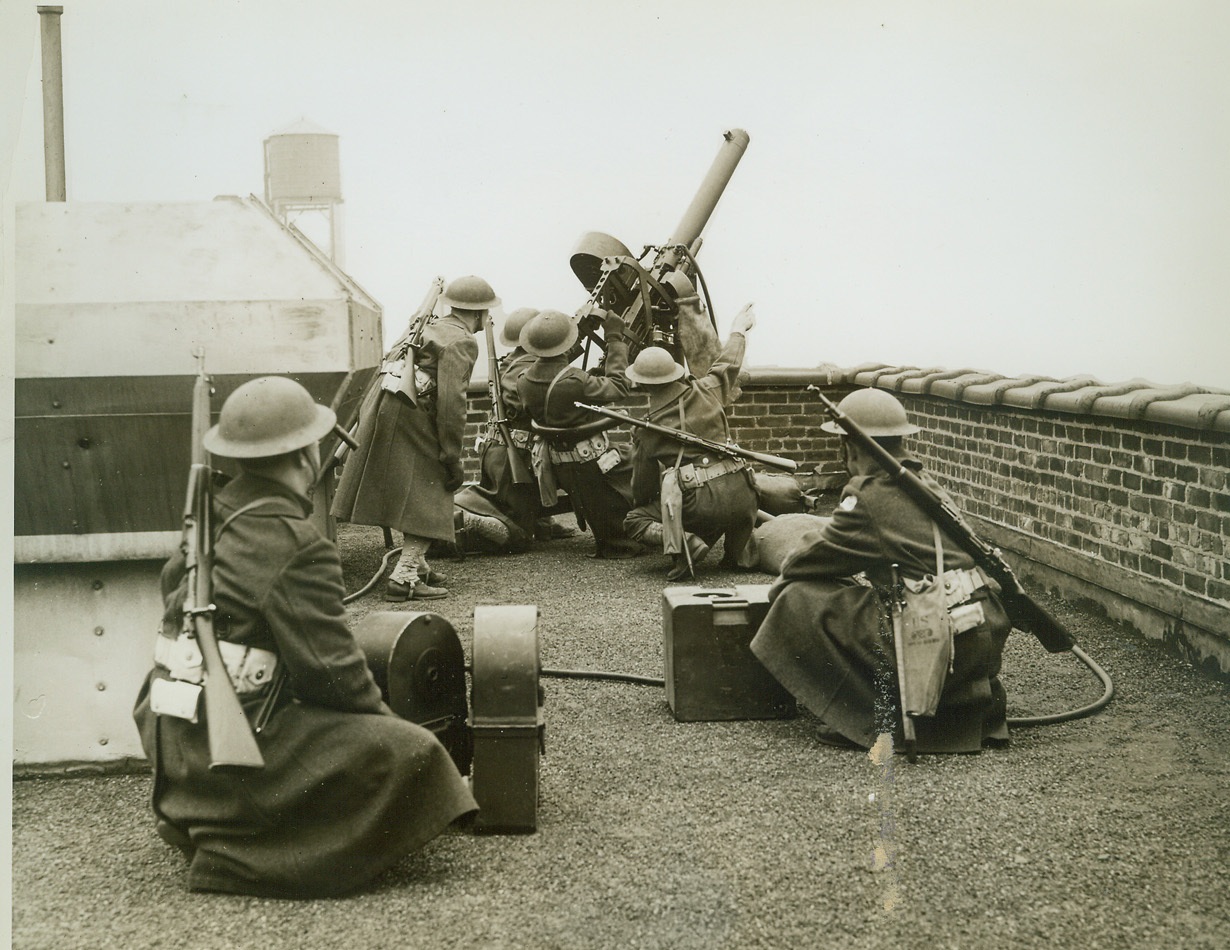 Anti-Aircraft Guns Ready to Protect New York, 12/29/41 NEW YORK, N.Y. – Aircraft defenses have been set up in New York City and anti-aircraft crews are on 24-hour watch for enemy air raiders. Photo above shows anti-aircraft gun emplacement on roof of skyscraper, with crew on practice “alert” pointing it at an imaginary enemy plane. Because of Army censorship background and identifying marks have been blacked out so that location of this emplacement will not be revealed. Credit: (ACME); 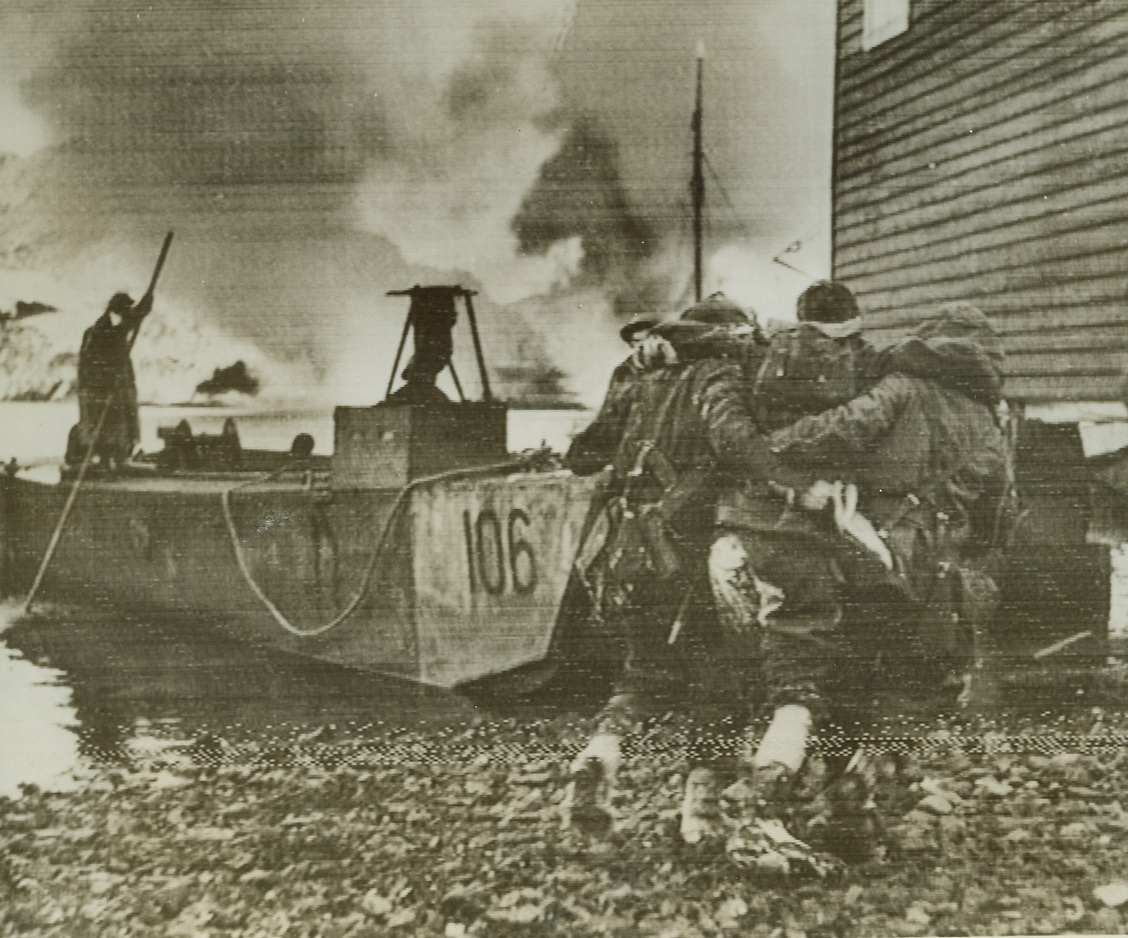 EVACUATING WOUNDED FROM NORSE BASE RAZED BY BRITISH, 12/31/41 VAAGSOE, NORWAY—British commandos, in a surprise down landing, Dec. 27, on the small German-occupied port of Vaagsoe, killed, wounded or took prisoner almost the entire garrison of upward 200 men, ‘blitzed’ all the industrial plants, dynamited and spiked all the coastal guns that protect this important assembly place for Norwegian coastal convoys. Shown in this radiophoto just received from London is the evacuation of British wounded to invasion barge during raid. Credit: Acme Radiophoto; 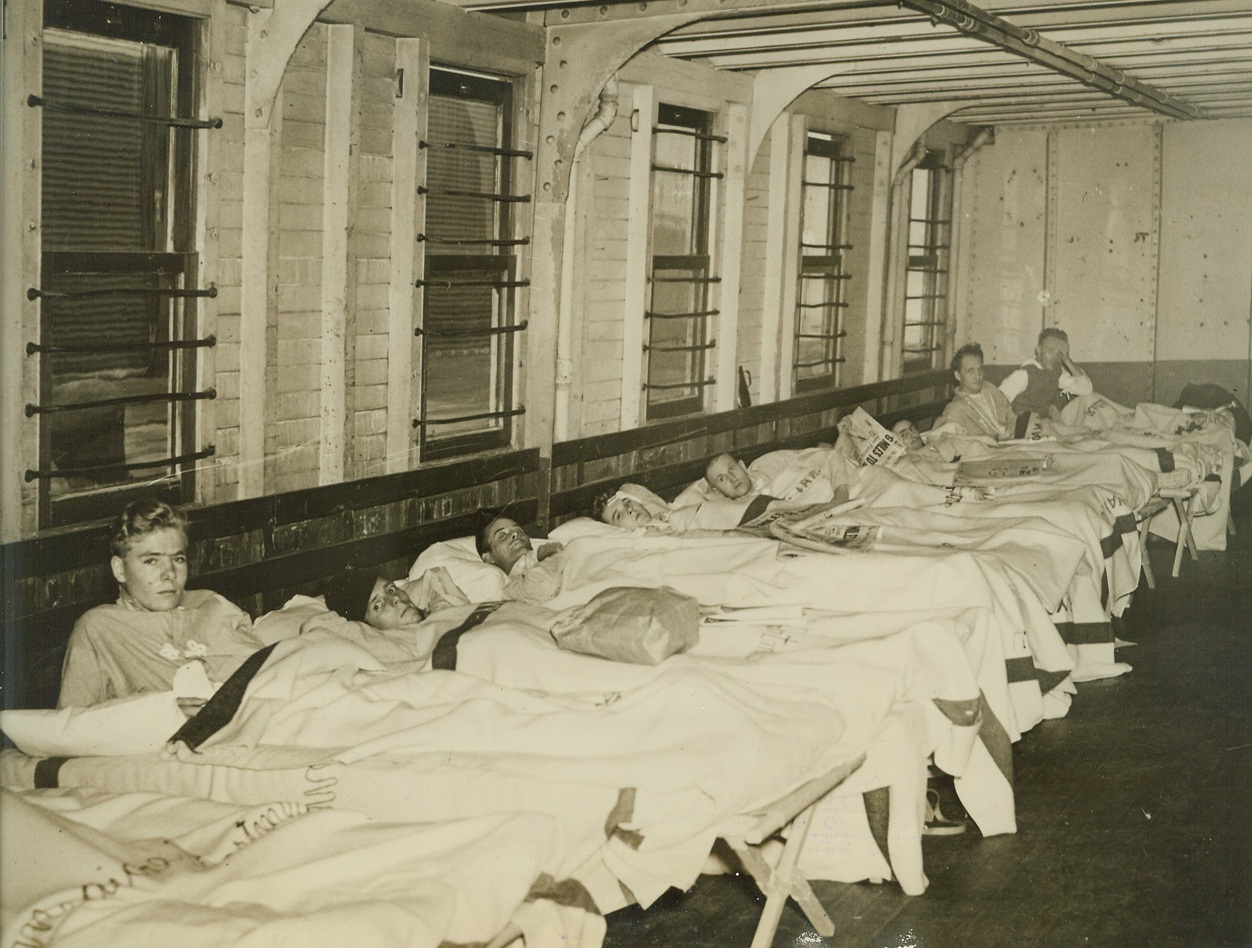 War Wounded Are Brought Home—Pearl Harbor Victims, 12/31/41 San Francisco—Here is the first picture of the war-wounded in San Francisco—U.S. seamen victims of the Japanese attack on Pearl Harbor Dec. 7. Above, they await transfer to a hospital after their arrival. Passed by Navy censor. Credit: ACME.; 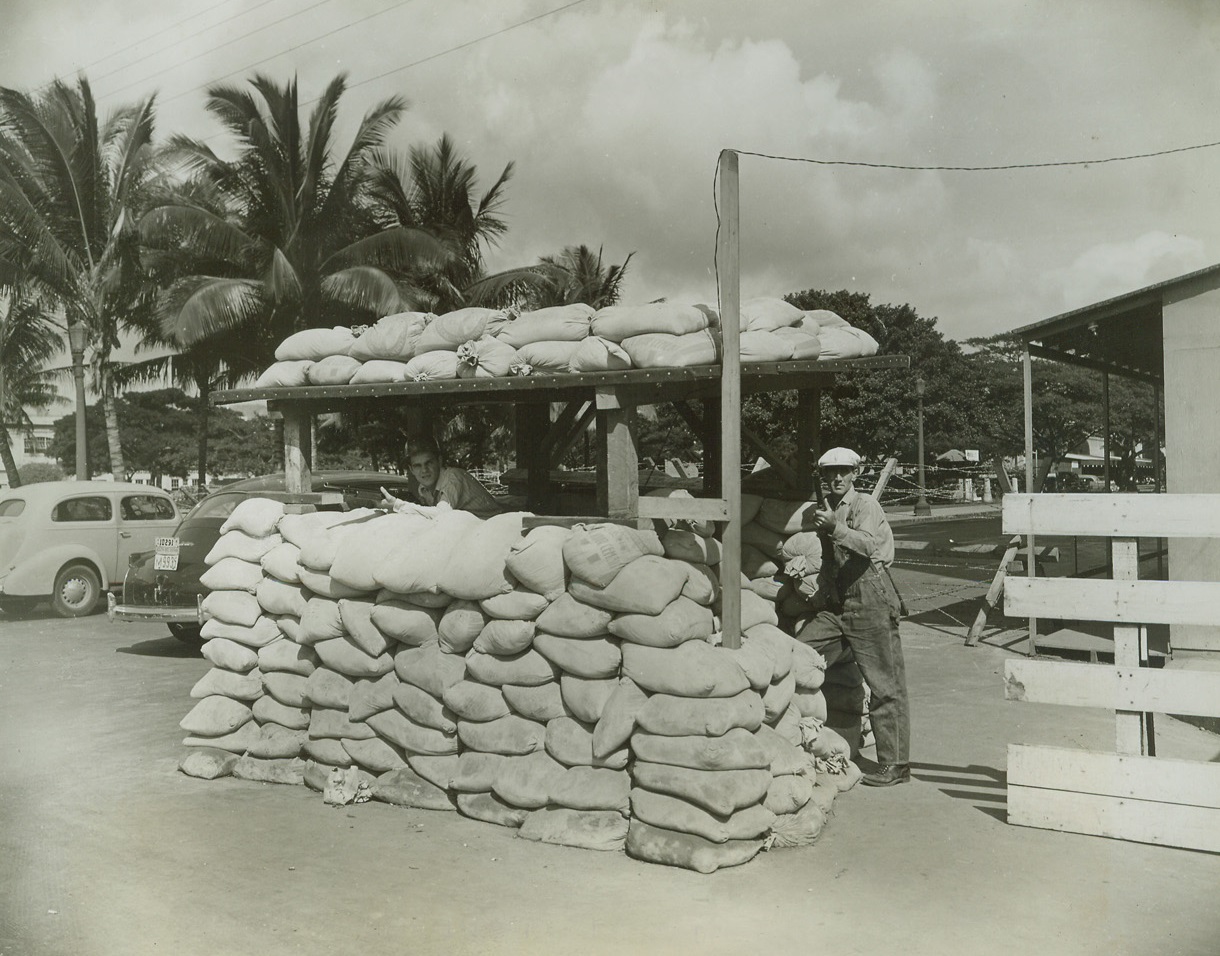