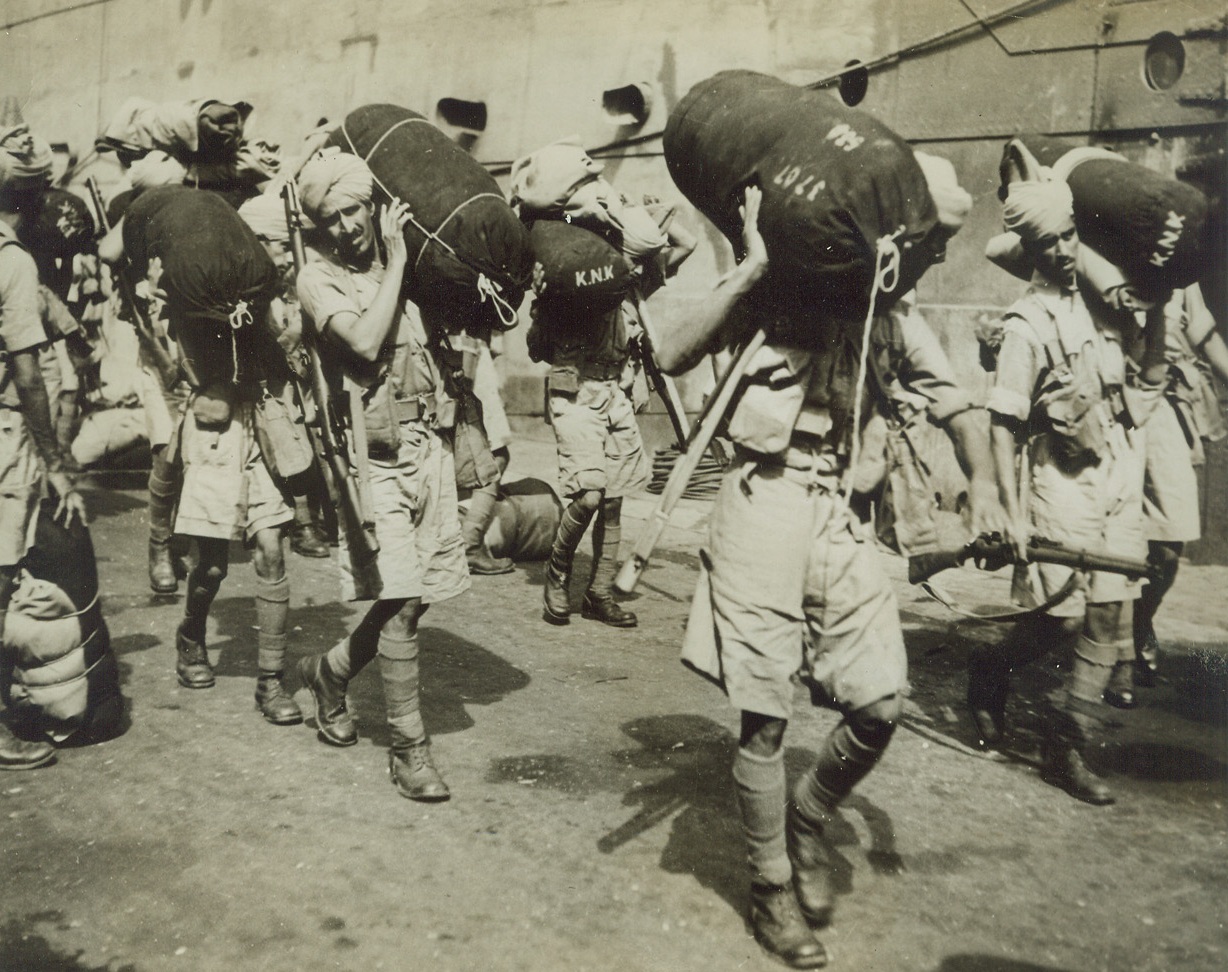 Indian Troops Arrive in Singapore, 1/2/1942. Singapore – Indian troops march to their billets after arriving in Singapore, December 21. They are mostly Punjabs and Southern Indians. In the photo, they have just been dismissed after an inspection upon arrival in the city. (Passed by British censor.) Credit: ACME; 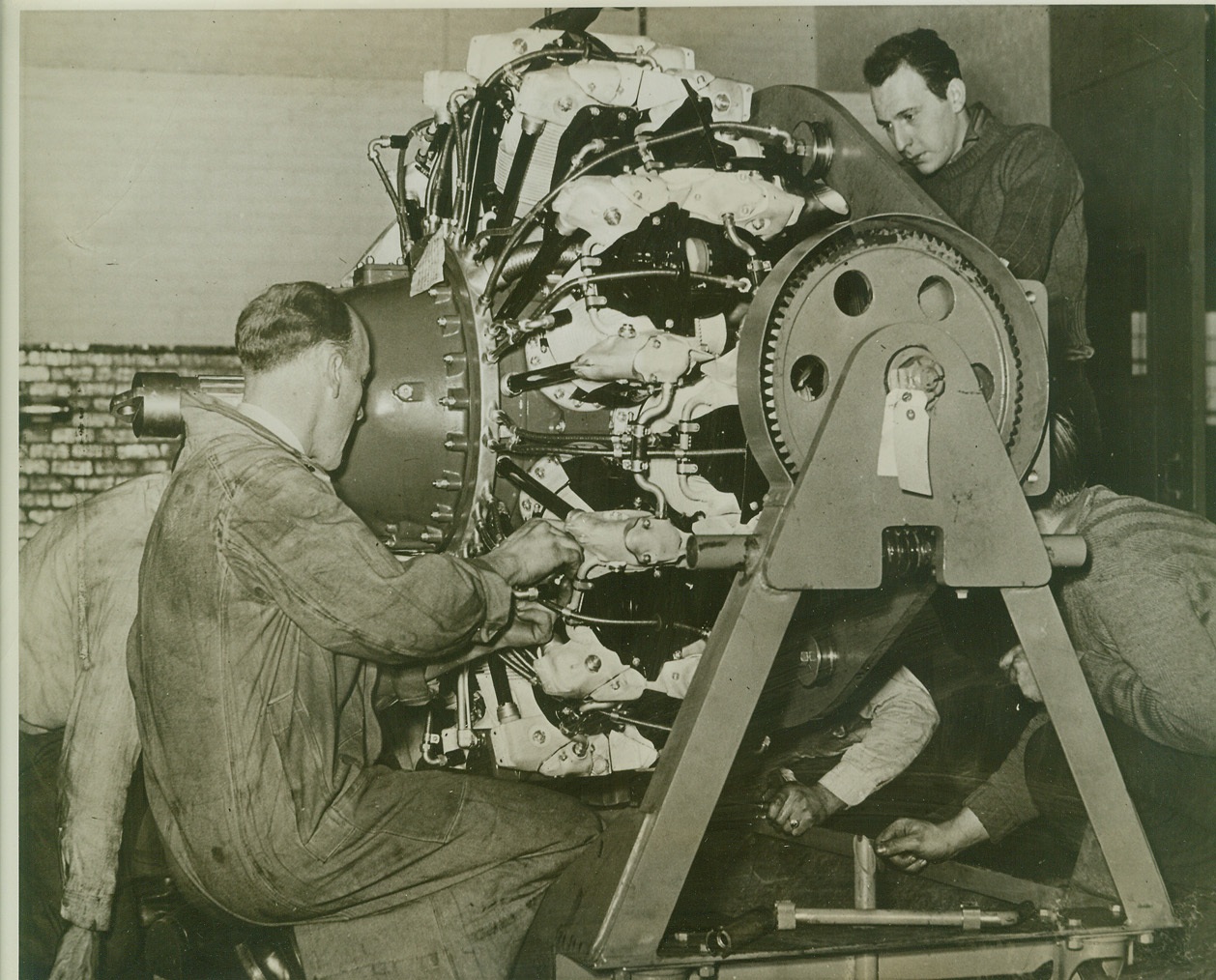 BUILDING ENGINES FOR WAR PLANES, 1/30/1942. MELROSE PARK, ILL.—Aircraft engine production at the Buick Aviation Engine Plant at Melrose Park, ILL., has exceeded its proposed schedules and is gaining acceleration everyday in out-put volume. With several thousand employees at work on assembly lines turning out engines for American bombers and fighter planes, the plant is expected to build most of the aircraft motors for the arms program. This photo, approved by the War Department, is one of the first to be taken inside the plant showing actual production. PHOTO SHOWS: Engine for a bombing plane, fresh from the assembly line, being tuned by mechanics before final test run. Credit: OWI Radiophoto from ACME; 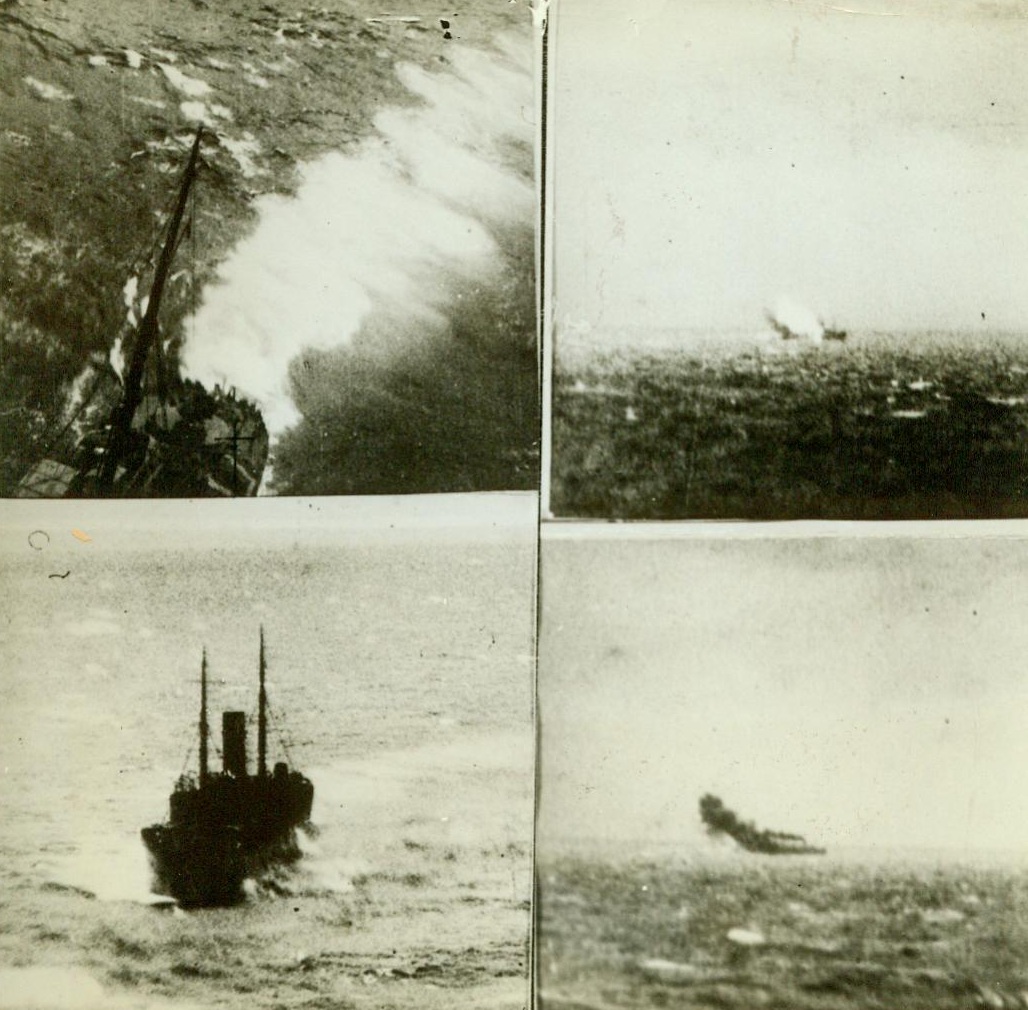 RAF BOMBER SINKS ENEMY SUPPLY SHIP, 1/1/1942. IONIAN SEA. – These four pictures tell the story as a medium bomber of the RAF Mediterranean Command sighted and attacked a 4,000-ton enemy merchant vessel in the Ionian Sea. At top, left, the bomber, directly overhead, has loosed delayed action bombs; at bottom, left, the bomber draws away. At top, right, bombs burst on the target; and at bottom, right, heavy smoke pours from the blazing vessel. When last seen the ship was down by the stern and listing heavily to port and the crew was clambering over the sides Credit Line (ACME); 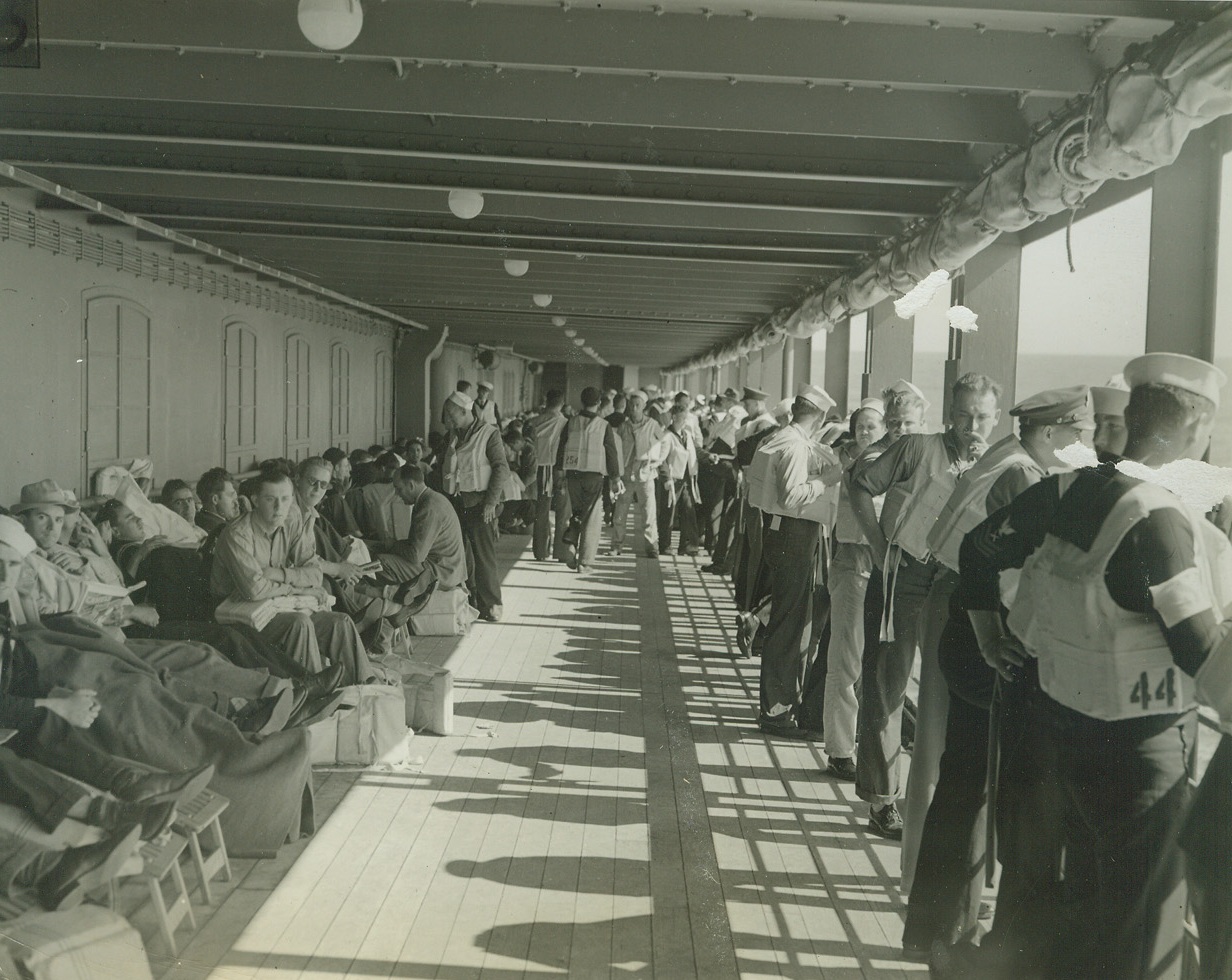 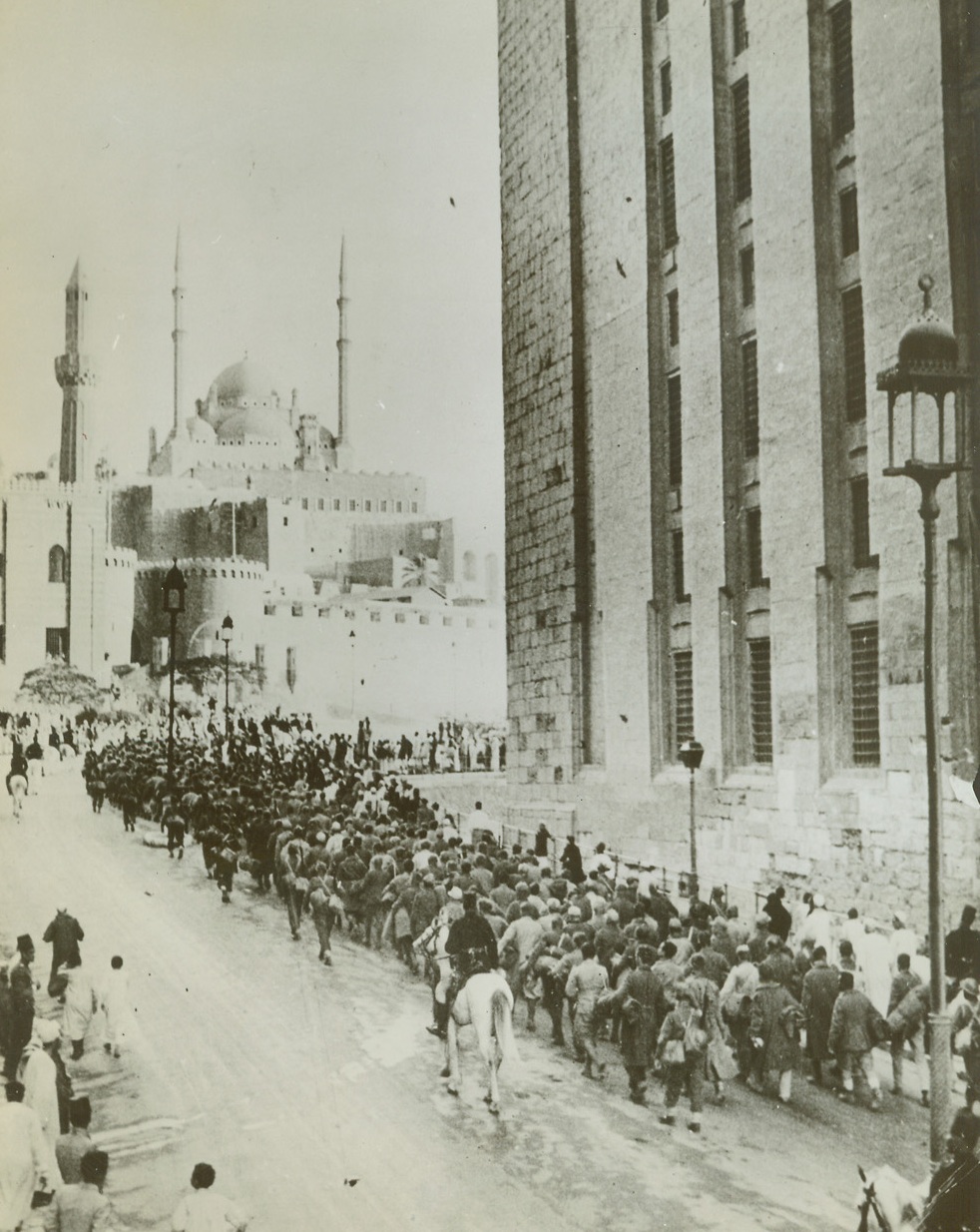 Axis Prisoners of British Reach Cairo, 1/2/1942. Cairo, Egypt – A column of prisoners, captured in Libya during the current British offensive, as they neared the massive walls of the Citadel of Cairo, built by Saladin, showing the landmark of the Mohamed Al Mosque above, and the Mosque of Sultan Hassan (right). Note crowd of curious natives at left. They are being escorted by Egyptian mounted police (white horses). Credit line (ACME; 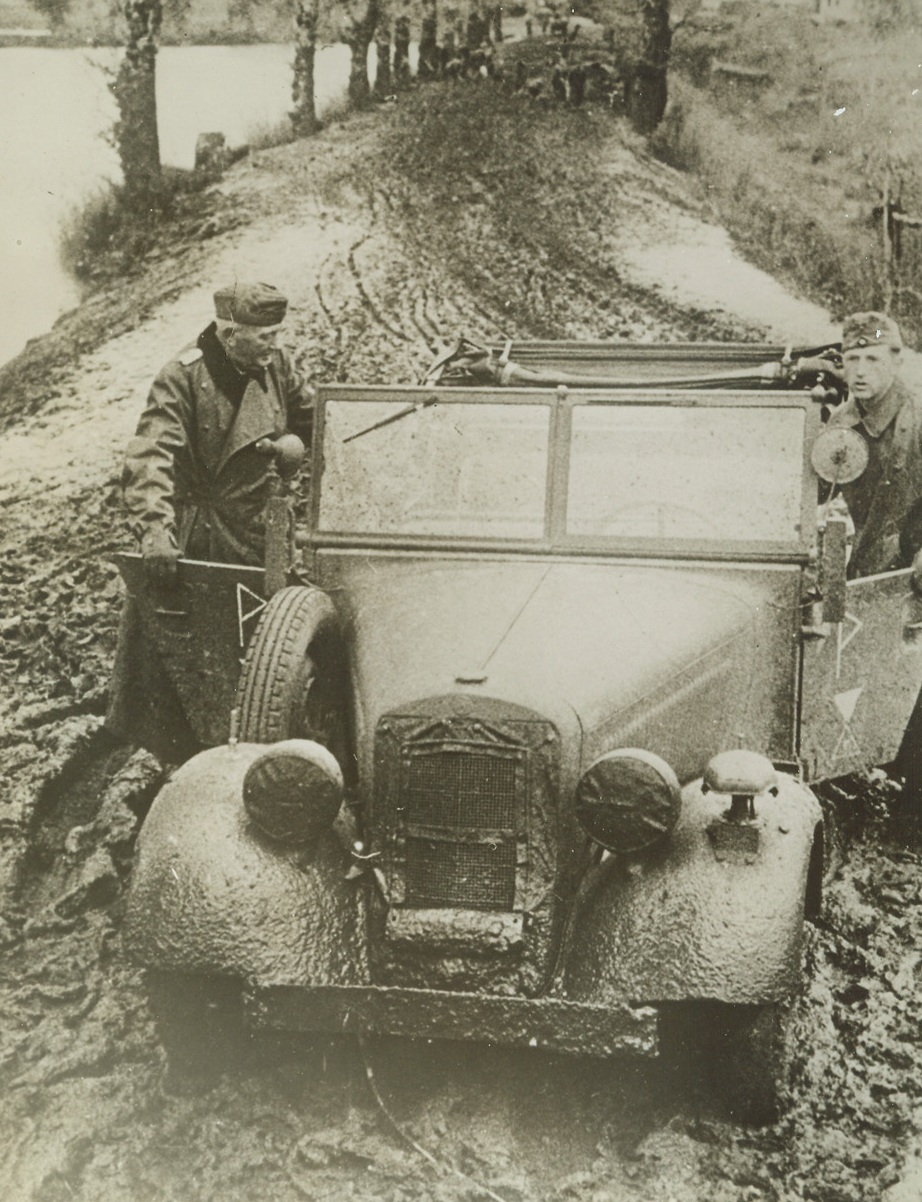 “Anybody Got a Sponge?”, 1/3/1945. Russo-German Front—This may give you some idea of the difficulties besetting the Germans on their round-trip into Russia. This officer and his driver had to get out and walk when their reconnaissance car bogged down in the famed Russian mud. They should have stayed home. Passed by German censor. Credit: ACME.; 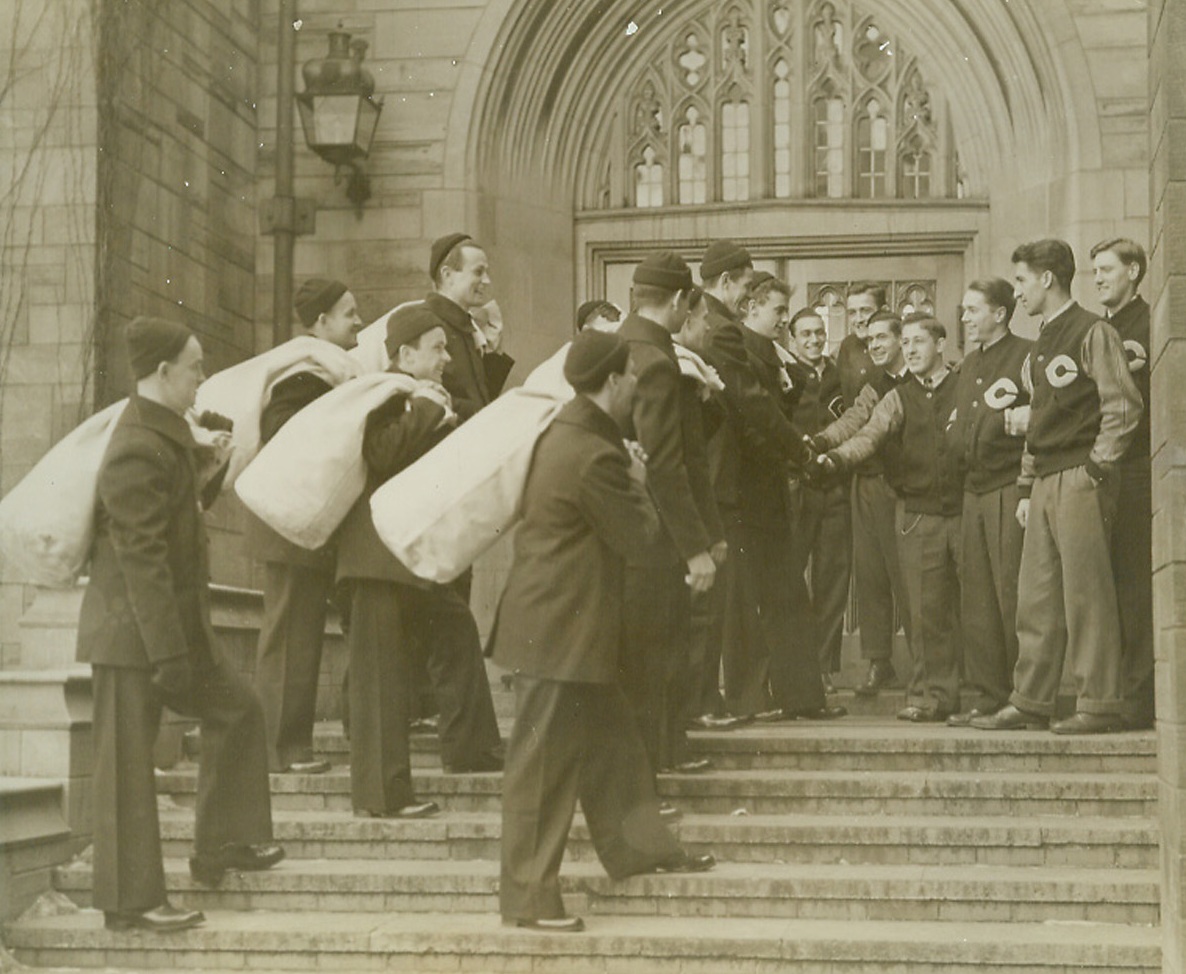 No title. 1/6/1945. Chicago—University of Chicago lettermen welcome some of the 500 coast guardsmen to their campus dormitory, Burton Court, where the seamen will live until their base training period at the nearby U.S. Coast Guard station is completed. The Coast Guard, now an active fighting unit of the U.S. Navy, is training men for coast defense as well as rescue work. Credit: ACME.; 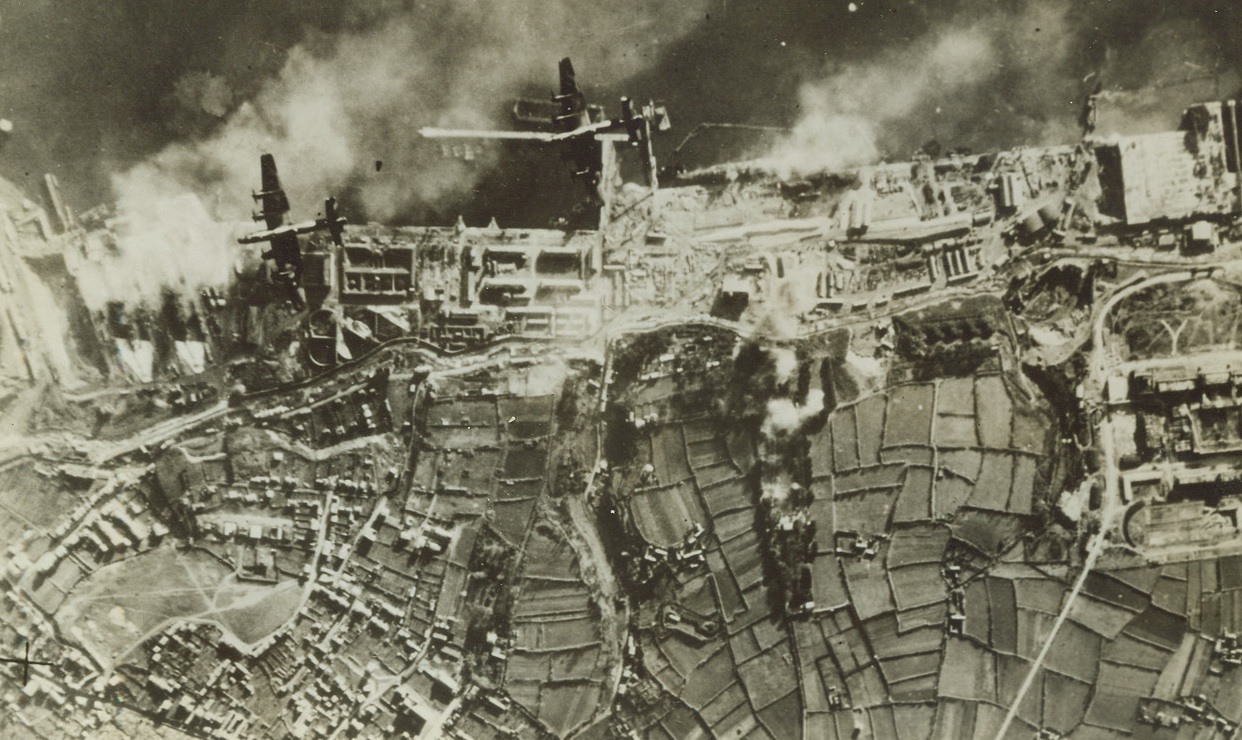 Daylight Raid on Brest, 1/3/1942. Brest - Here is an air view of the recent daylight bombing of Brest. Two 4-motored Halifax Bombers of the RAF Bomber Command can be seen pressing home their attack on the German Pocket Battleships Sharnhorst and Gneisenau, which were in drydock (at left). The Germans sent up a smoke screen in an effort to obscure the target. It wasn’t very effective. Passed by British Censor Credit: ACME; 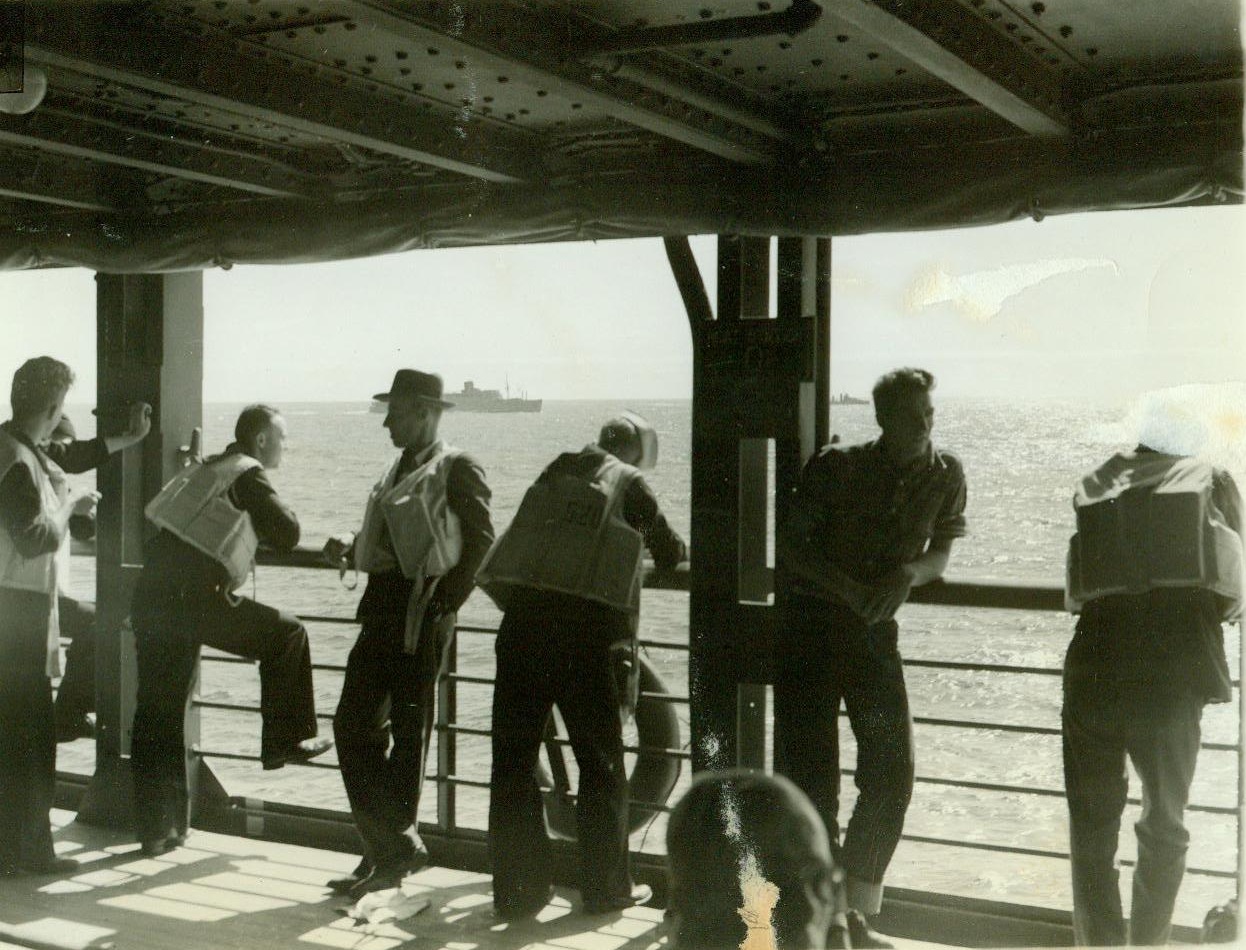 U.S. sends reinforcements to Pacific defenses, 1/3/1942. SOMEWHERE-IN-THE-PACIFIC – Lining the … of a giant transport, soldiers, sailors and civilian technicians watch a fellow transport and its accompanying destroyer in the distance as they head for the Pacific war zone to support U.S. forces in the battle against the Japanese. One of the first pictures released by Navy censors showing dispatch of reinforcements to Pacific forces, the photo was made by an ACME staff cameraman. CREDIT LINE (ACME) 1-3-42; 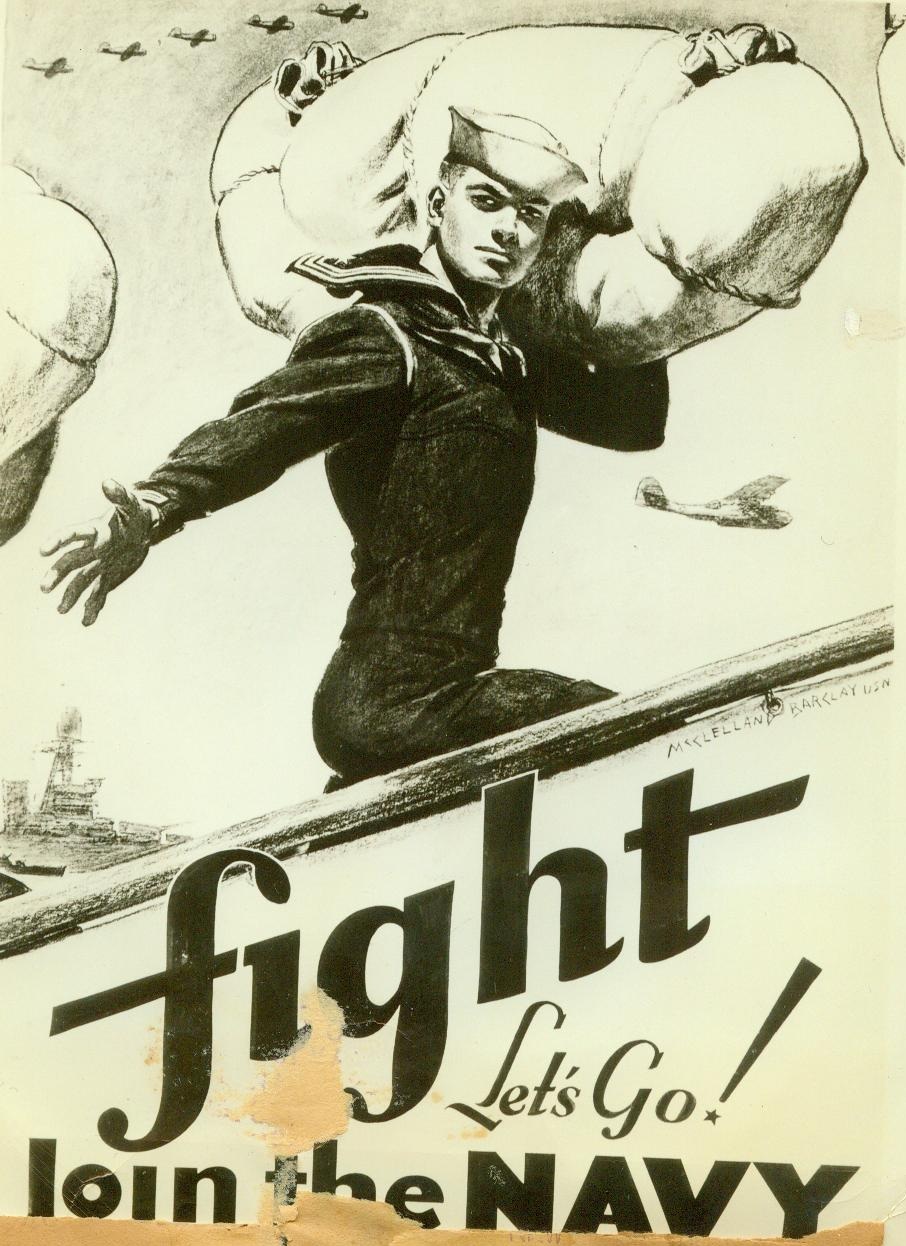 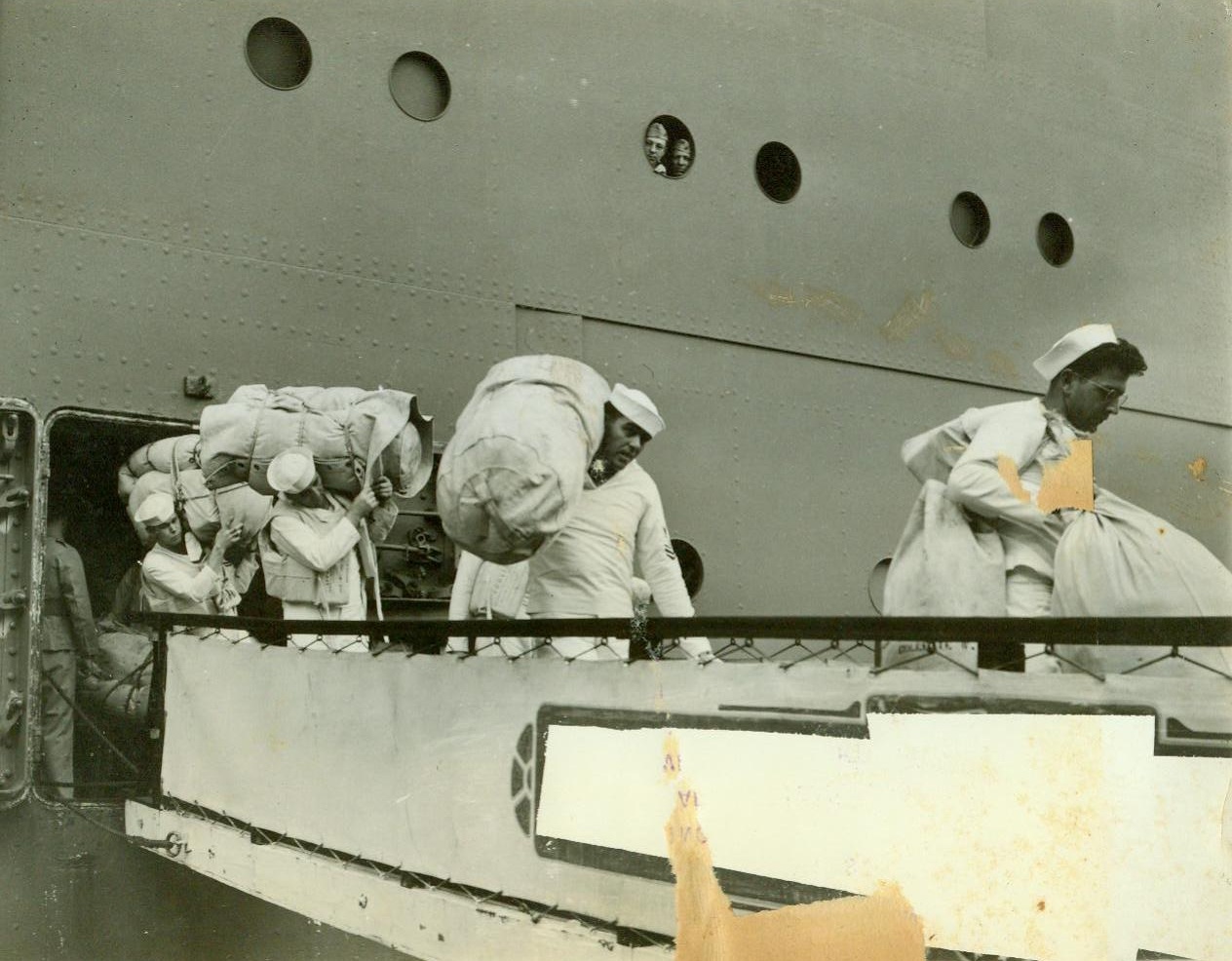 Bound for shore at an American Pacific outpost, 1/3/1942. SOMEWHERE-IN-THE-PACIFIC – Carrying their sea-bags, U.S. sailors go down the gangplank at an American possession in the Pacific, where they are arrived to support forces under attack by the Japanese. Behind them a soldier waits to descend. Passed by U.S. Navy Censor, these are the first pictures to be brought back showing a U.S. troop convoy Pacific-bound. CREDIT LINE (ACME) 1-3-42;