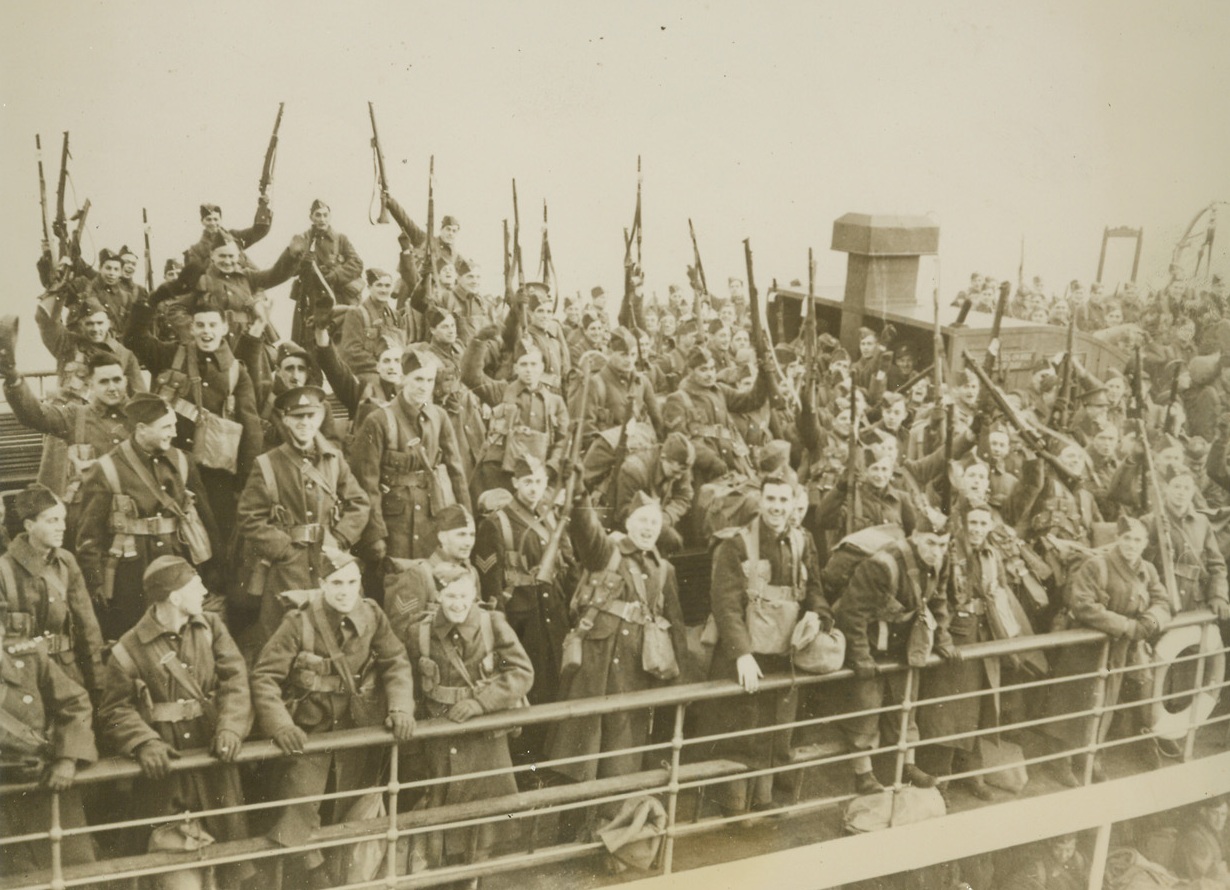 FIRST CANADIAN TROOPS ARRIVE IN ENGLAND, 1/3/1940 SOMEWHERE IN ENGLAND—Canadian troops, among the first Dominion Division to reach England for training to fit them for duty on the British front in France, raise a cheer alongside the quay as they arrived at an unidentified British port. Credit Line (ACME); 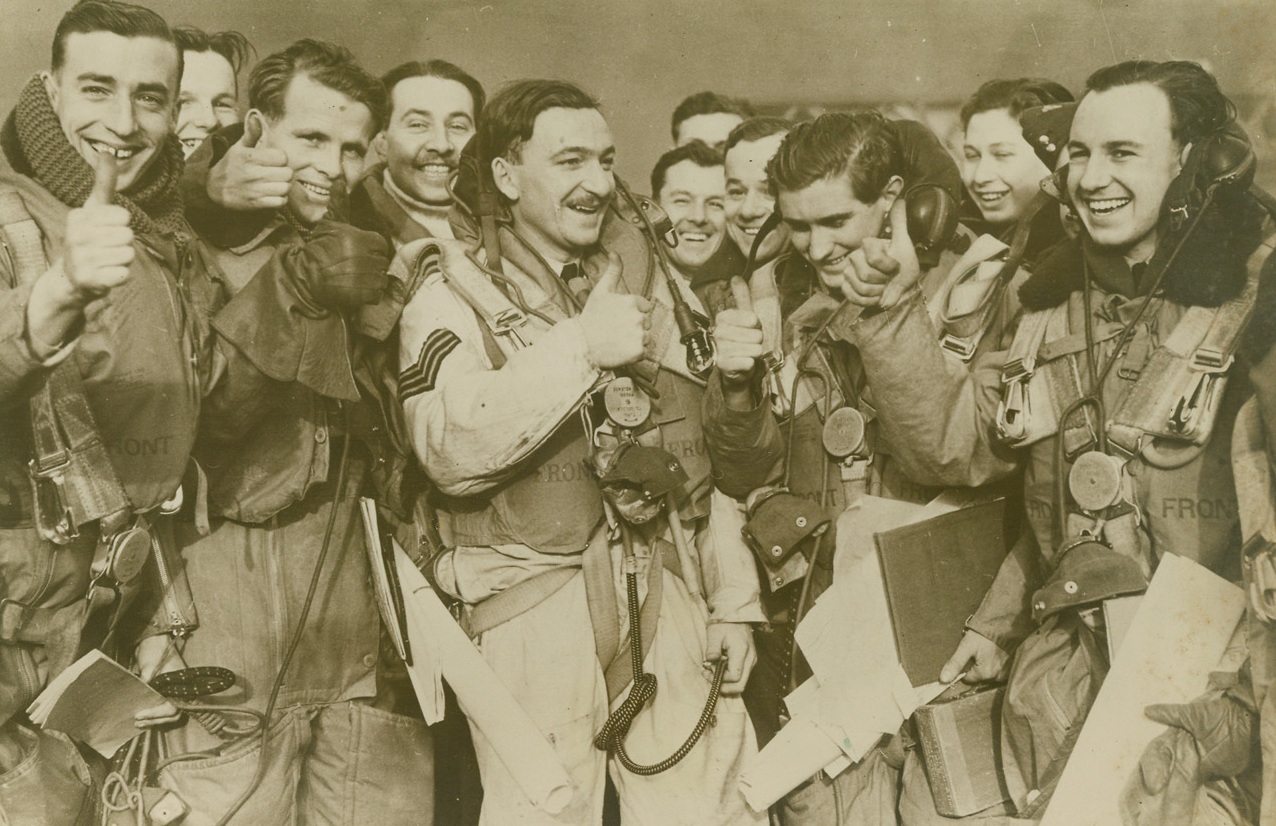 British Airmen In Heligoland Battle, 1/3/1940 Somewhere in England – Thumbs up for victory, some of the British Airmen who took part in the recent aerial combat over the Nazi Heligoland Naval Base, are shown upon their return to their home base “somewhere in England.” According to British reports, twelve Nazi Messerschmittt Bombers were shot down, while the British lost seven planes. Credit: ACME; 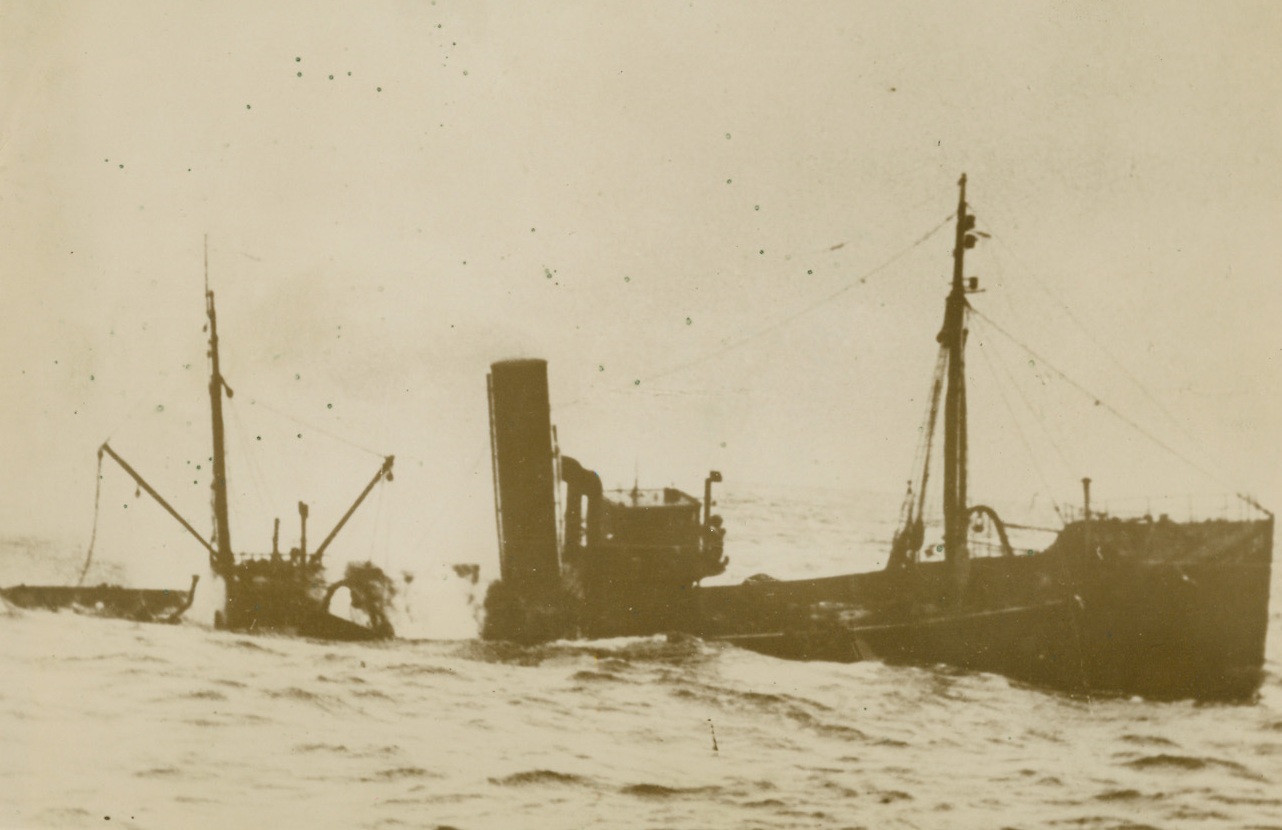 British Trawler Goes Down in the North Sea, 1/7/1940 On the North Sea—This is one of the series of exclusive pictures made of the sinking, in the North Sea, of a British trawler by a German U-Boat. Here is the trawler, her hull ripped apart, starting to settle at the stern. Credit: ACME. Caption from German sources, passed by censor.; 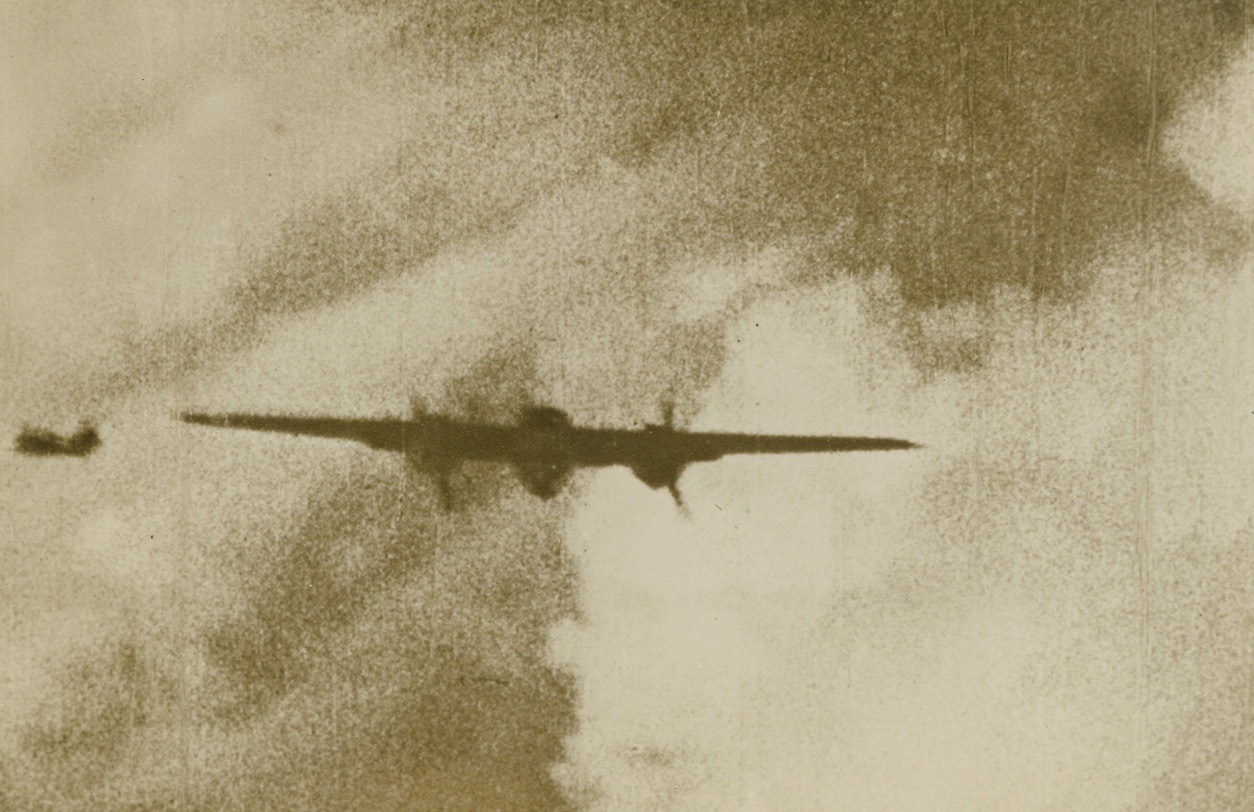 British Record Of Air Battle, 1/7/1940 when firing ceases, the photographic record stops. If pictures sometimes lack clarity due to cloud condensation on lens, vibration and fumes from exhaust of aircraft being attacked, they nevertheless provide certain evidence of concentrated gunfire by fighter planes. The eight-gun power of a fighter plane has greater strength than the entire machine gun strength of 1914 Brigade of Infantry. Photo shows: A Dornier being attacked. Note the dark object on left; this is one of the crew in the act of bailing out. Credit Line (ACME); 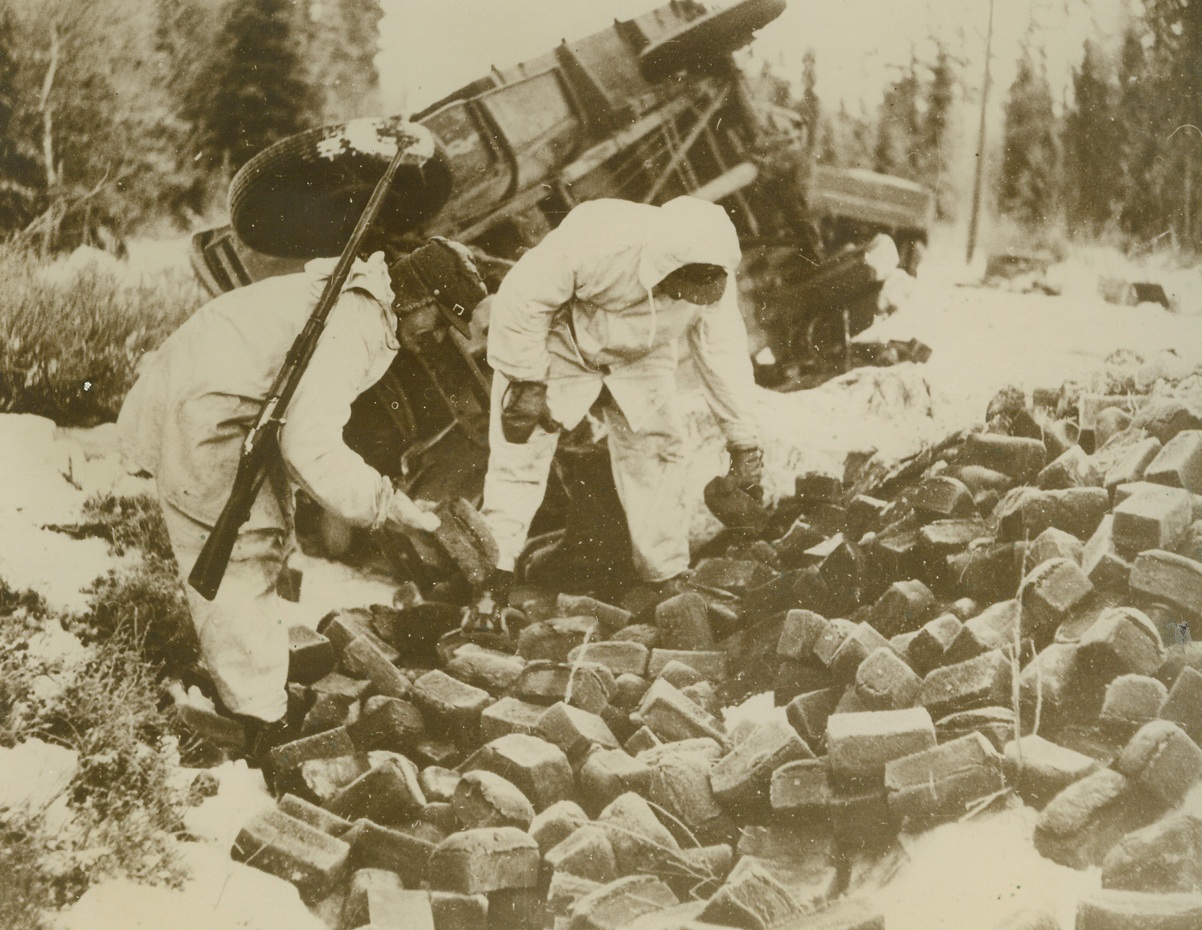 Russian Food Truck Captured by Finns, 1/10/1940 FINLAND – Finnish “ghost” soldiers inspecting a large quantity of Russian black bread, captured by the Finns when they attacked a Soviet supply column. A wrecked food truck is shown in the background. Credit: (ACME); 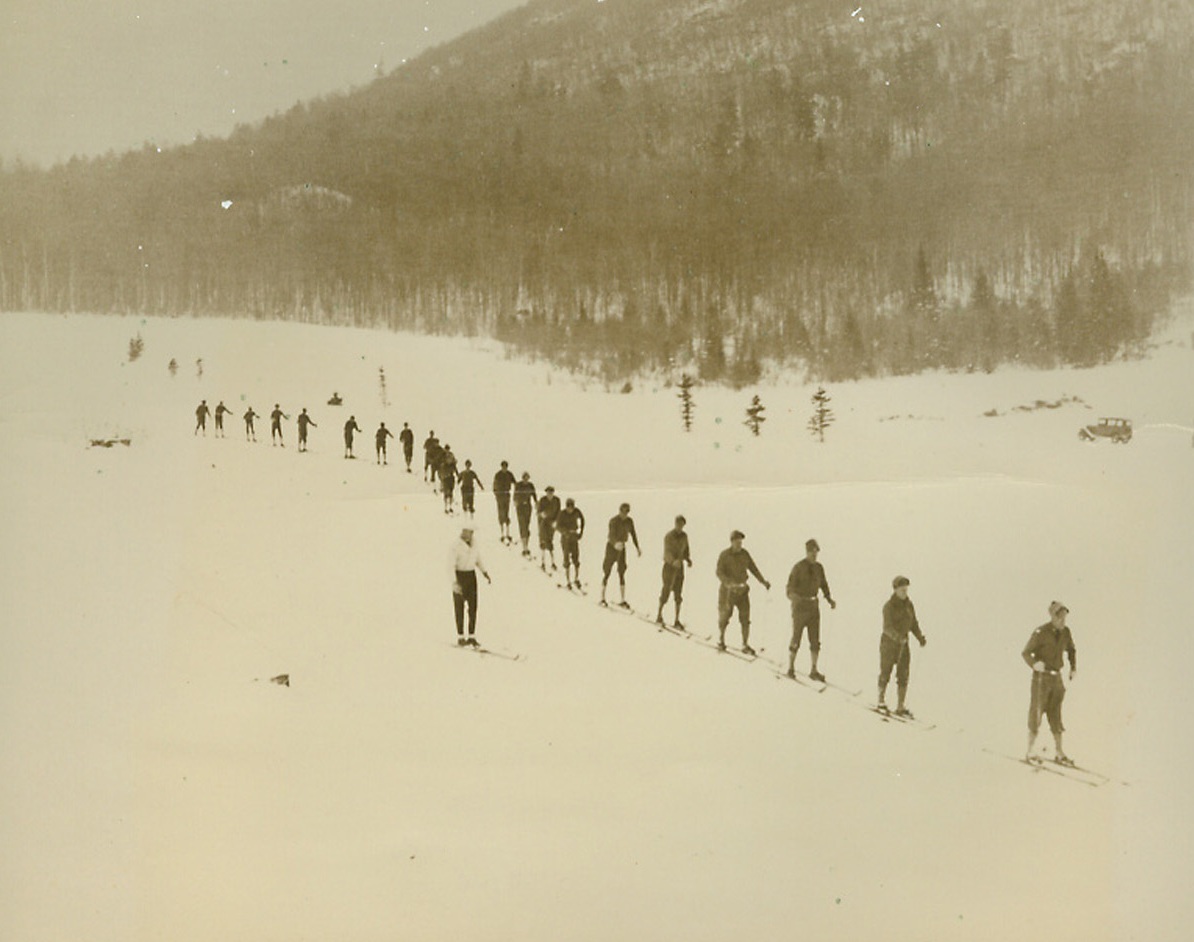 U.S. Army Takes to Skis, 1/14/1940 Lake Placid, N.Y.—Perhaps taking a lesson from the Fighting Finns who glide swiftly over the snow to cut down unwary Russians. Men of the 26th Infantry, U.S. Army, stationed at Plattsburg, N.Y., slide along in single file as they receive ski instruction at Lake Placid from Rolf Munsen, Olympic star. Credit: ACME; 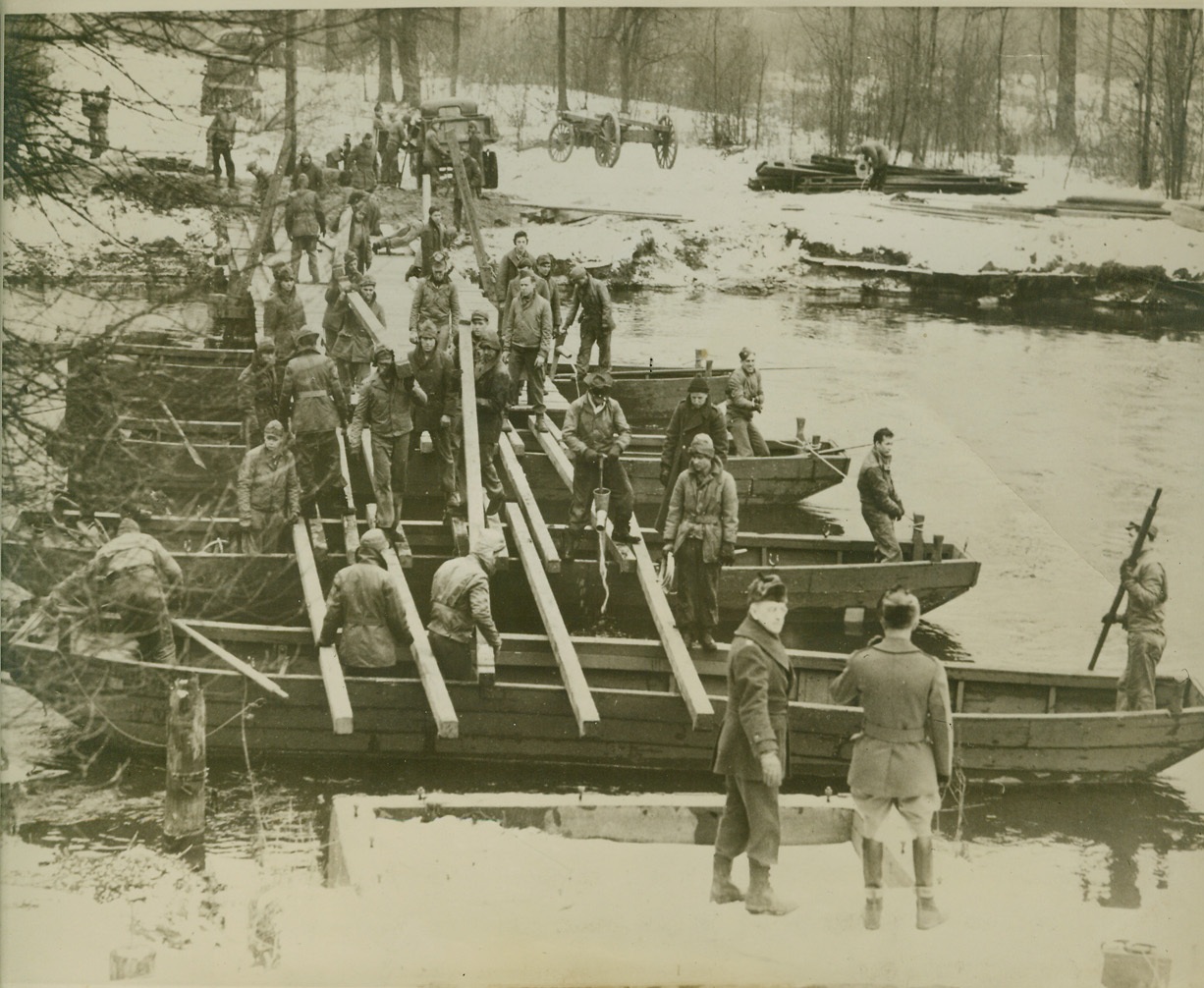 BRIDGES MADE WHILE YOU WAIT, 1/17/1940 FORT CUSTER, MICH. – When HQ of 5th Division found they needed a bridge across the Kalamazoo River to have access to Fort water they didn’t wait for the new steel bridge to be finished. Using available material and 15-year-old pontoons, the engineers had this bridge ready in three hours. Credit: OWI Radiophoto from ACME; 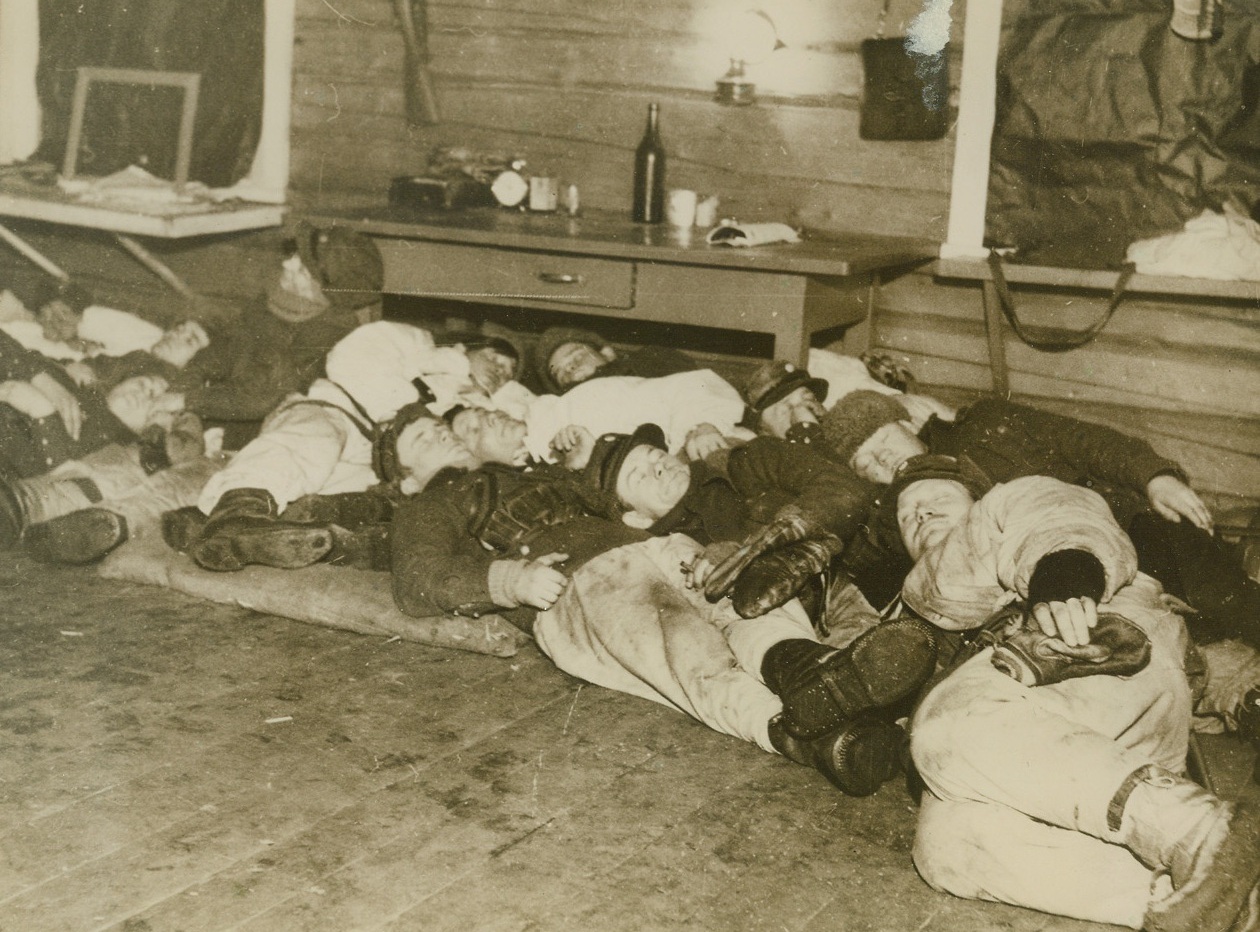 Well-earned Rest, 1/19/1940 FINLAND – Finnish soldiers asleep on the floor of a shelter near the Northern Front, before resuming their efforts to repel Russian troops.Credit Line (Acme); 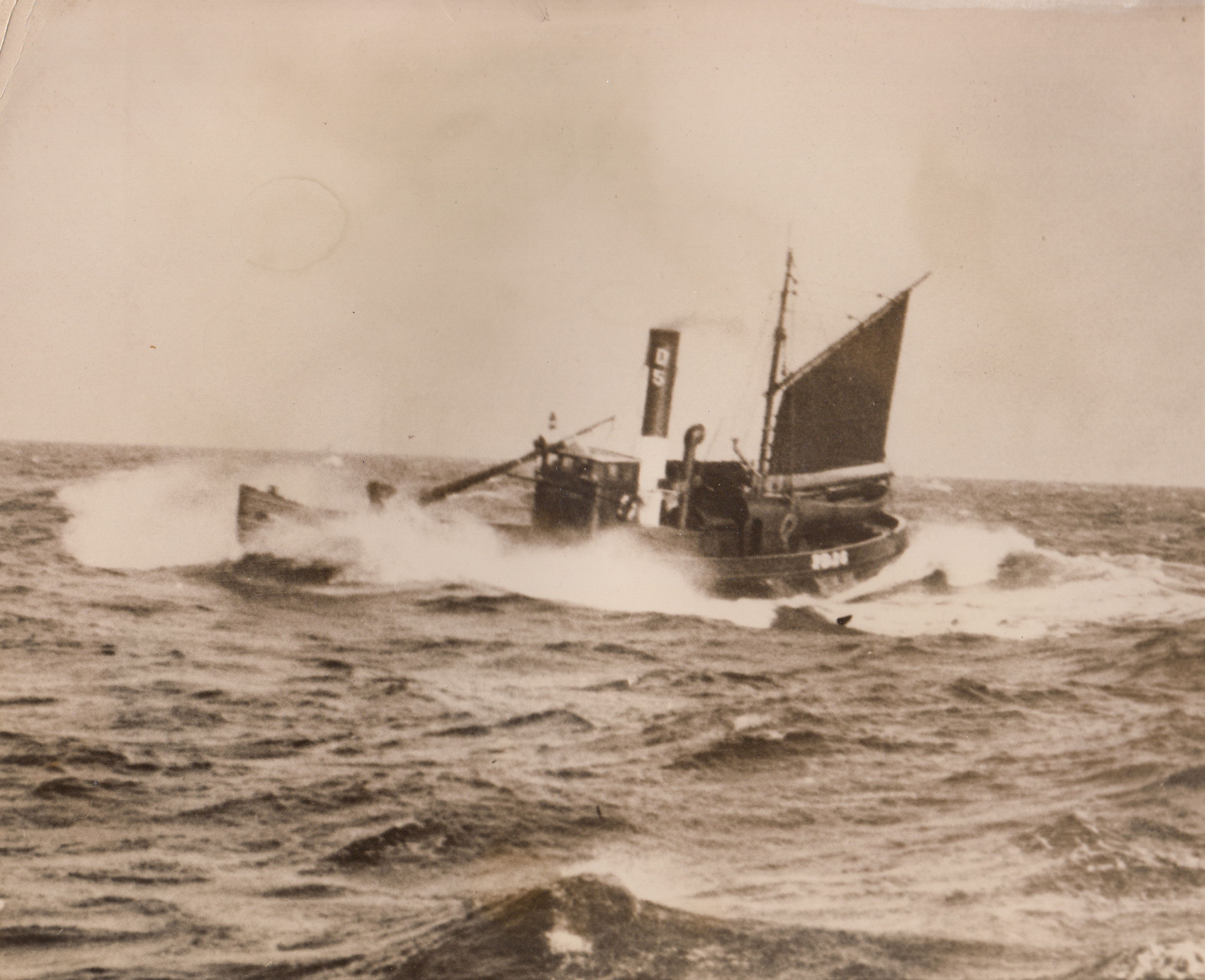 Feeding the “Tight Little Isle”, 2/9/1940 England – Depending largely on sea borne commerce to provide for her insular population, Britain, one referred to as the “Tight Little Isle” by Napoleon, looks to her fishing industry to provide a goodly percentage of the nation’s food, especially in times of war. Here is a fishing trawler, unit of Britain’s “Food Fleet”, shoving her bow into heaving seas as a sail augments the engines.; 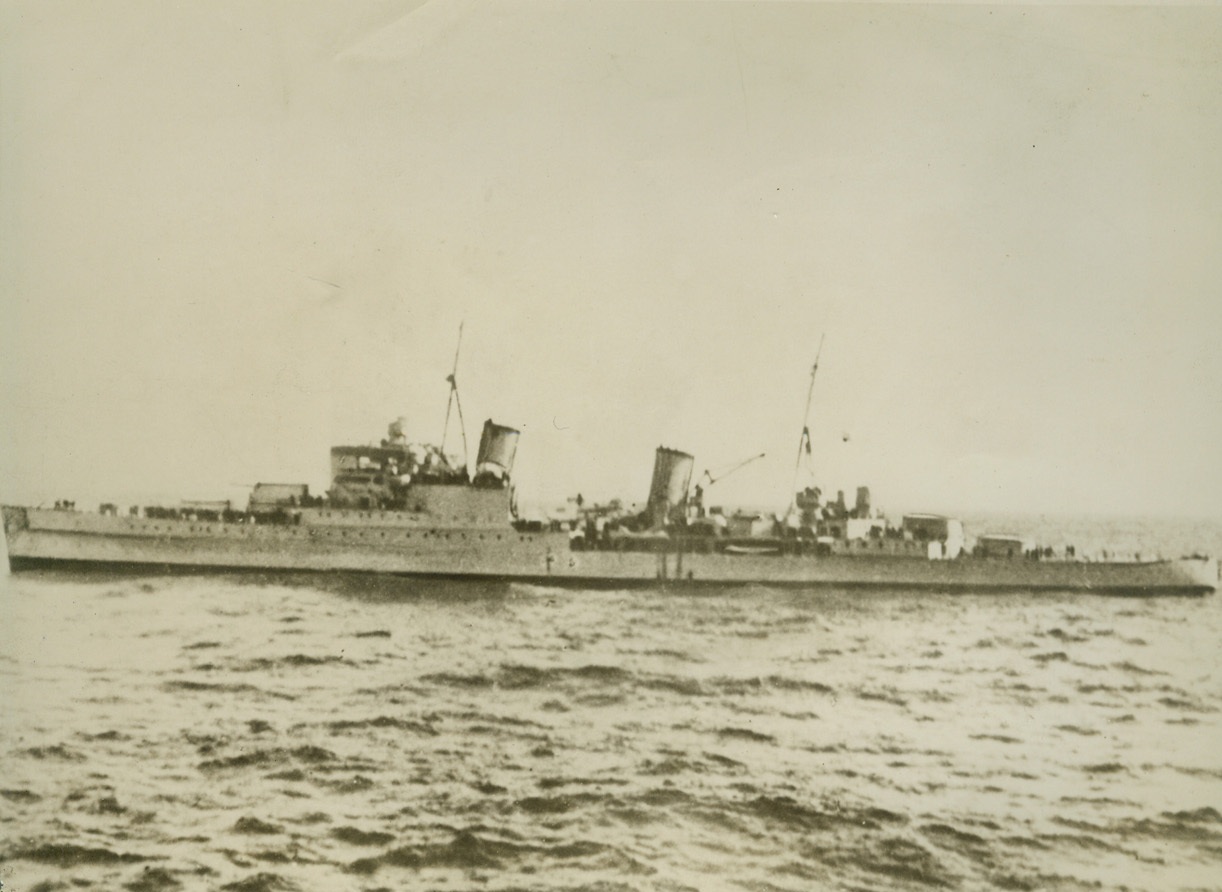 British Cruiser that Aroused Japs Ire, 2/11/1940 Tokyo - A view of the British cruiser (unidentified) that stopped the Japanese liner Asma Maru off Tokyo Bay and seized 21 German sailors bound for the Fatherland via Japan, and gave rise to international repercussions. Credit line (ACME); 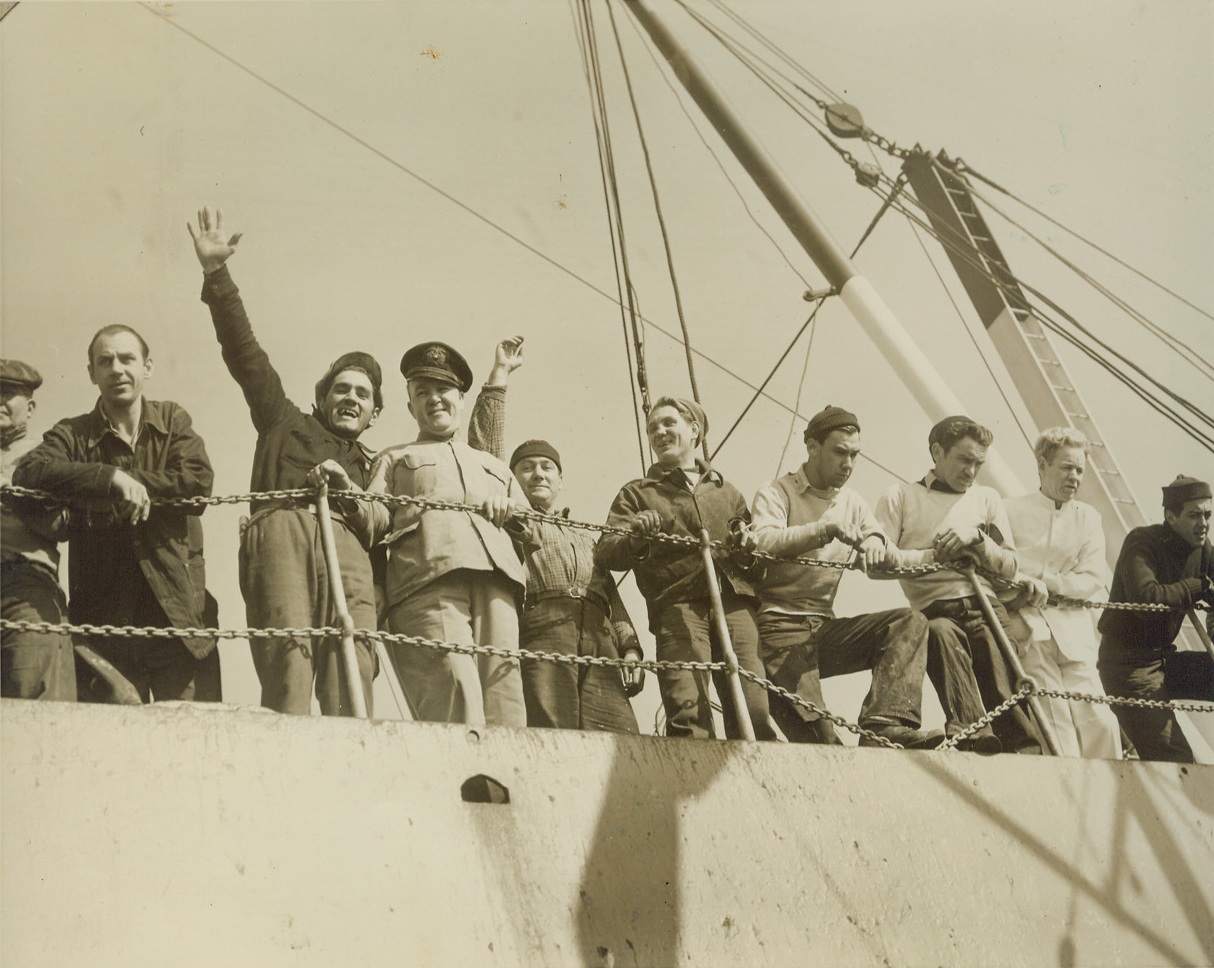 U.S. SHIP HOME FROM NORWAY, 4/25/1940 NEW YORK CITY - Members of the crew of the American Freighter Normacsea wave to friends as the ship arrived in New York Harbor April 25th. The ship, first American vessel to come from Norway since the outbreak of war there was in the port of Trondheim when the Germans took over. It crossed with a cargo of $4,500,000 in Swedish gold. Credit: OWI Radiophoto from ACME; 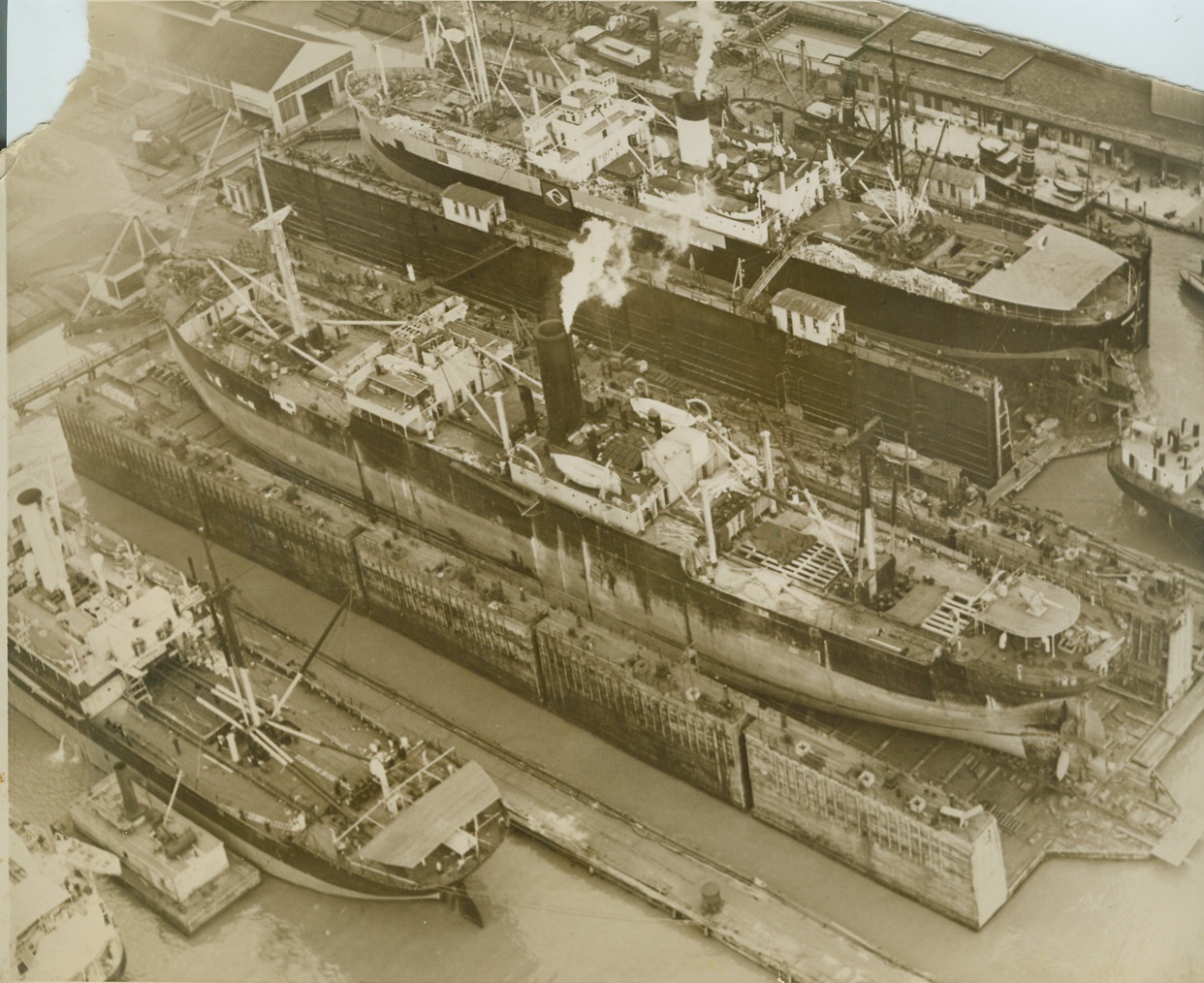 BRITISH SHIPS FITTED WITH ARMOR PLATE IN HOBOKEN, 4/25/1940 HOBOKEN, N.J. – A fine point involving the United States’ neutrality law has been raised with the disclosure that two British merchant ships are being fitted with armor plate in the Hoboken shipyard of the Bethlehem Steel Corp. The ships, one of which may be seen in center of this air photo with gun mounted on after deck, are having steel plates put on pilot houses, bridges and vital parts of the superstructures as protection against air bombs. It will be left to Secretary of State Cordell Hull to decide if this violates U.S. law. Credit: ACME; 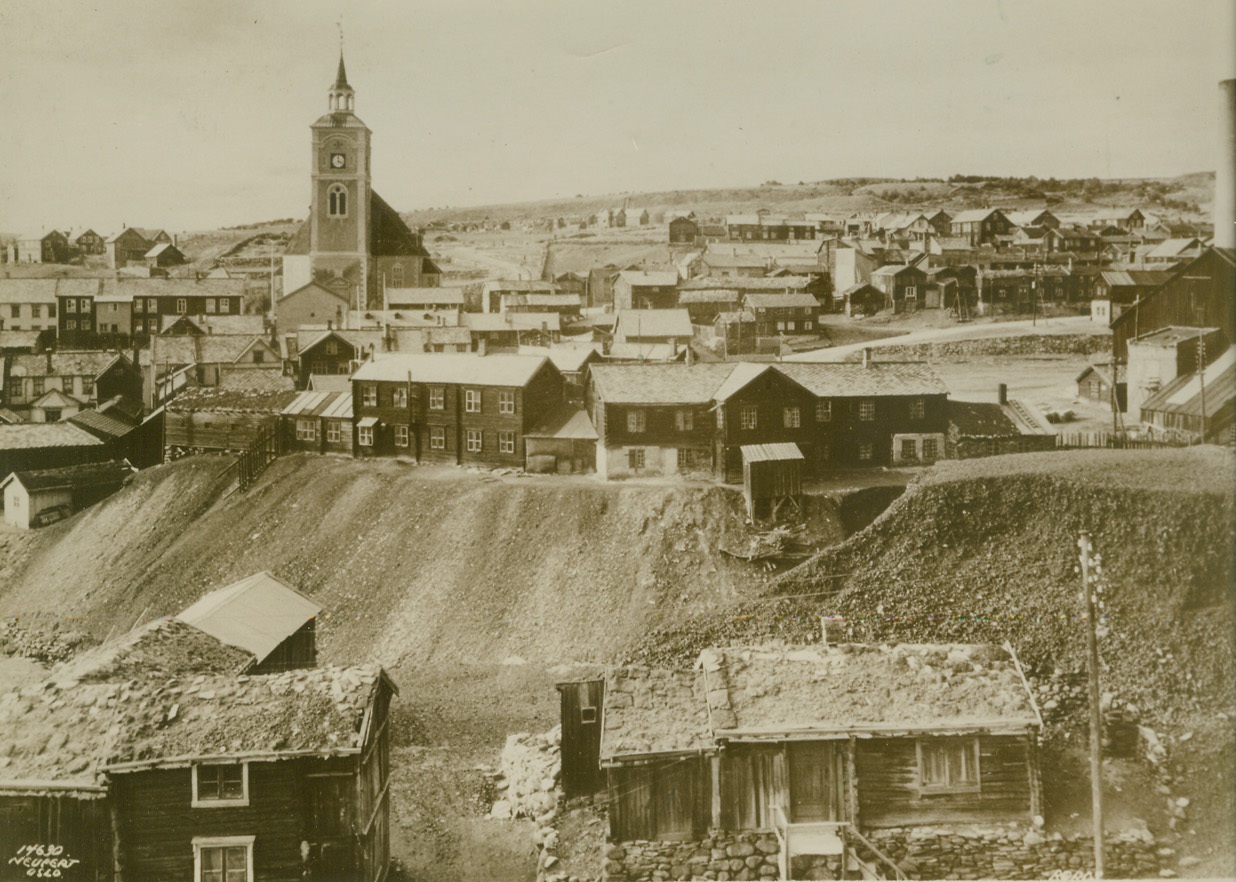 Smashing Germans Reach Roeros, 4/25/1940 ROEROS, NORWAY – A hard driving German column was reported to have reached the Norwegian town of Roeros, shown above in a general view, moving northward from Oslo. Messages reaching the Swedish border April 25th reported that Allied troops had reached the vicinity of Roeros to join the Norwegians in battling the Germans there.Credit: (ACME); 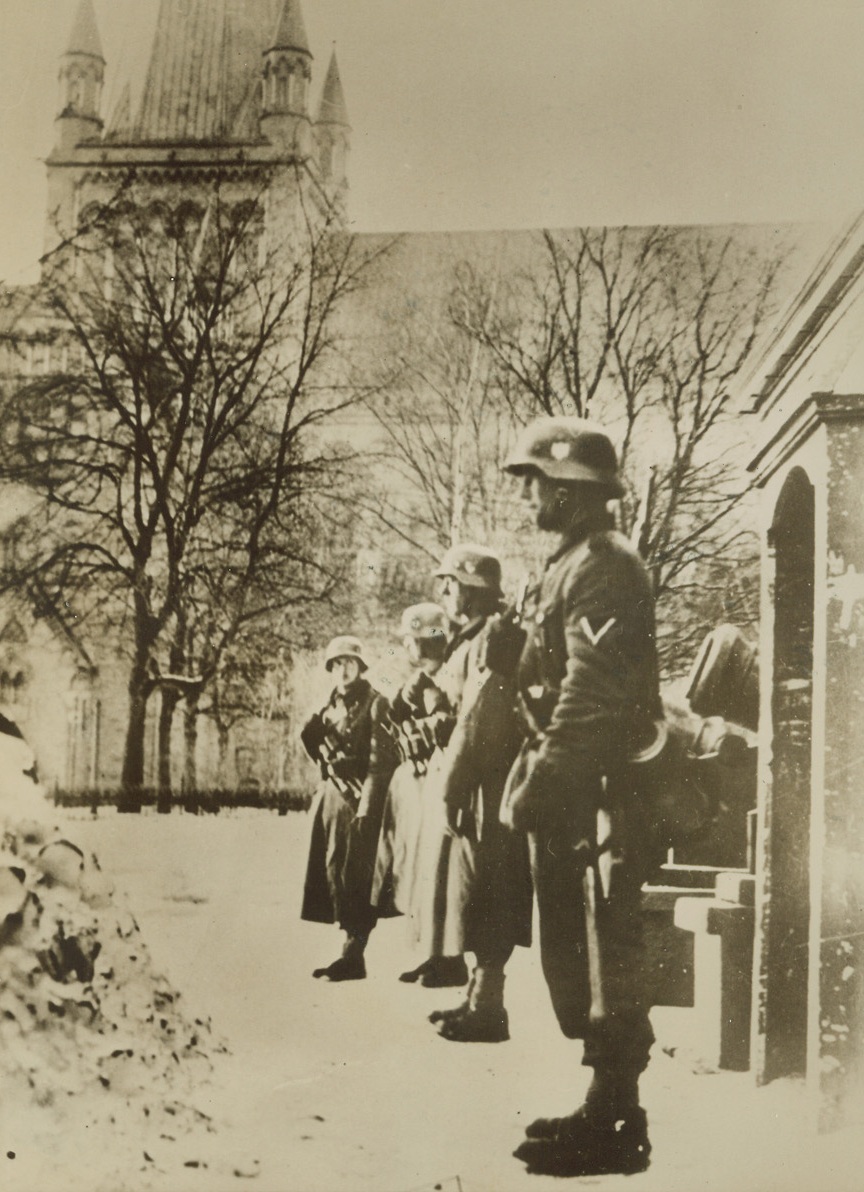 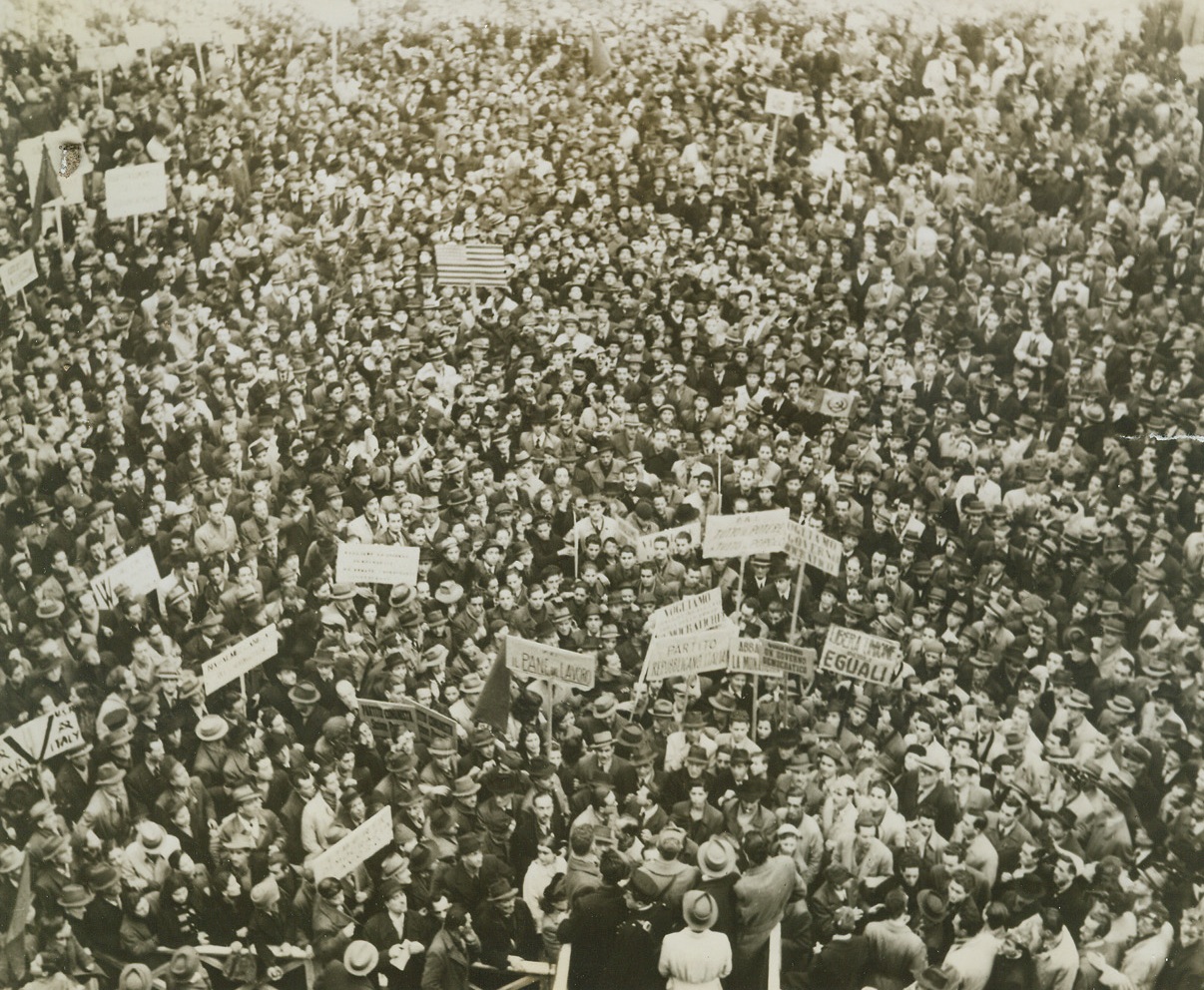 Protest Demonstration, 3/29/1940. NAPLES, ITALY -- This demonstration took the place of the planned 10-minute strike, abandoned in favor of the Allies war effort by the Italians in Naples. The vast throng of socialist, communist and action party members staged the demonstration on Sunday, March 12 against the Allies' support of the Badoglio Government of Italy. The American flag can be seen among the posters in the background. Credit Line (ACME);