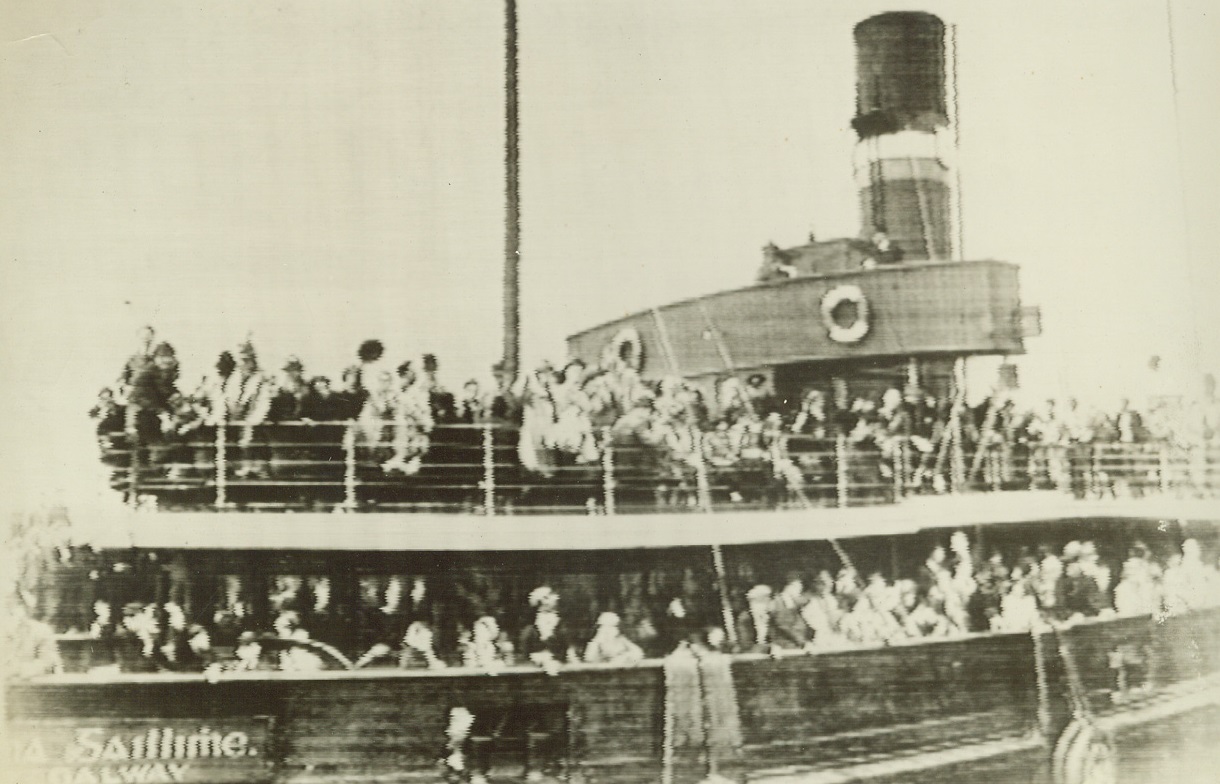 No Title, 6/2/1940 Galway, Ireland -- Americans leaving on the liner President Roosevelt are pictured on the trawler that is taking them to the ship. Credit: ACME; 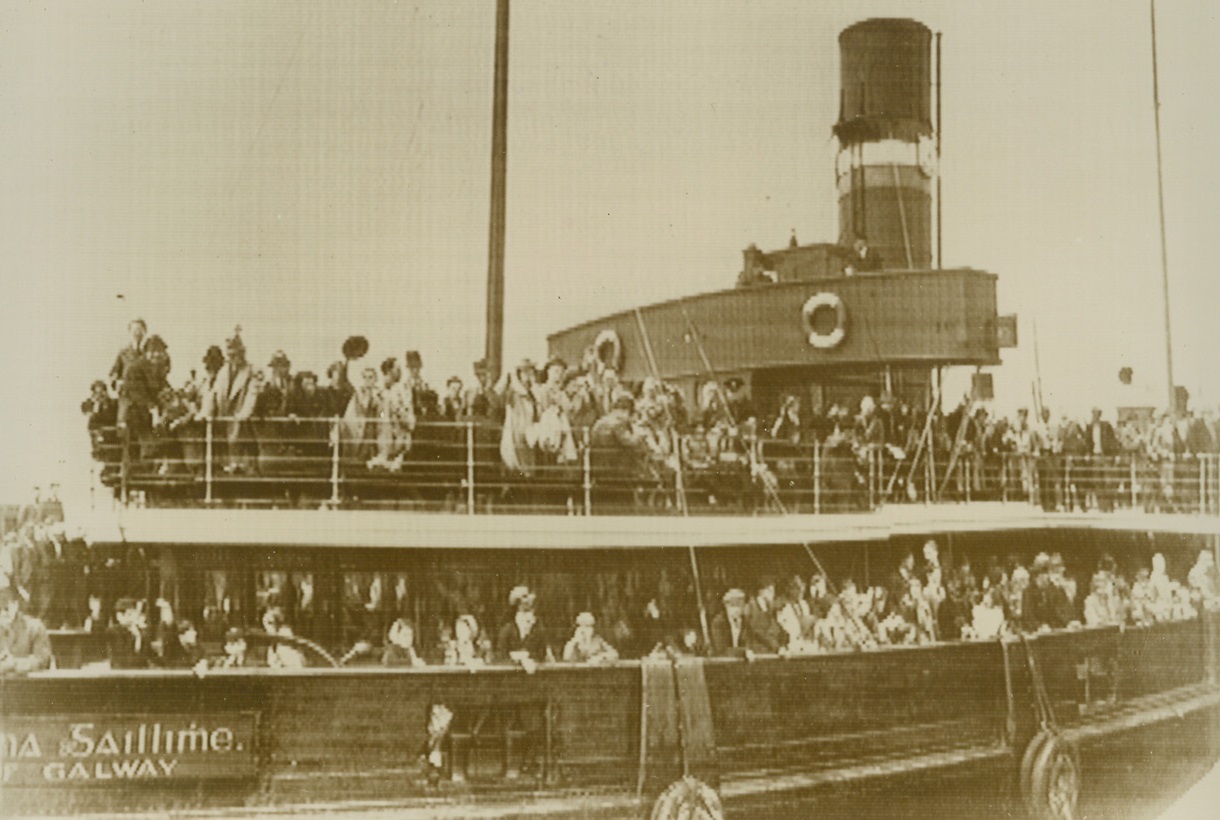 As Liner President Roosevelt Sailed for U.S., 6/2/1940 Galway, Ireland -- Some of the 824 Americans who boarded the liner President Roosevelt at Galway are shown lining the rails of the tender which carried them to the ship. Many notables were numbered among the passengers fleeing Europe’s total war. More than 100 Americans who couldn’t get passage were left behind here, but it is believed that the liner Washington, now en route to Bordeaux, would pick them up on the return voyage. Credit: ACME; 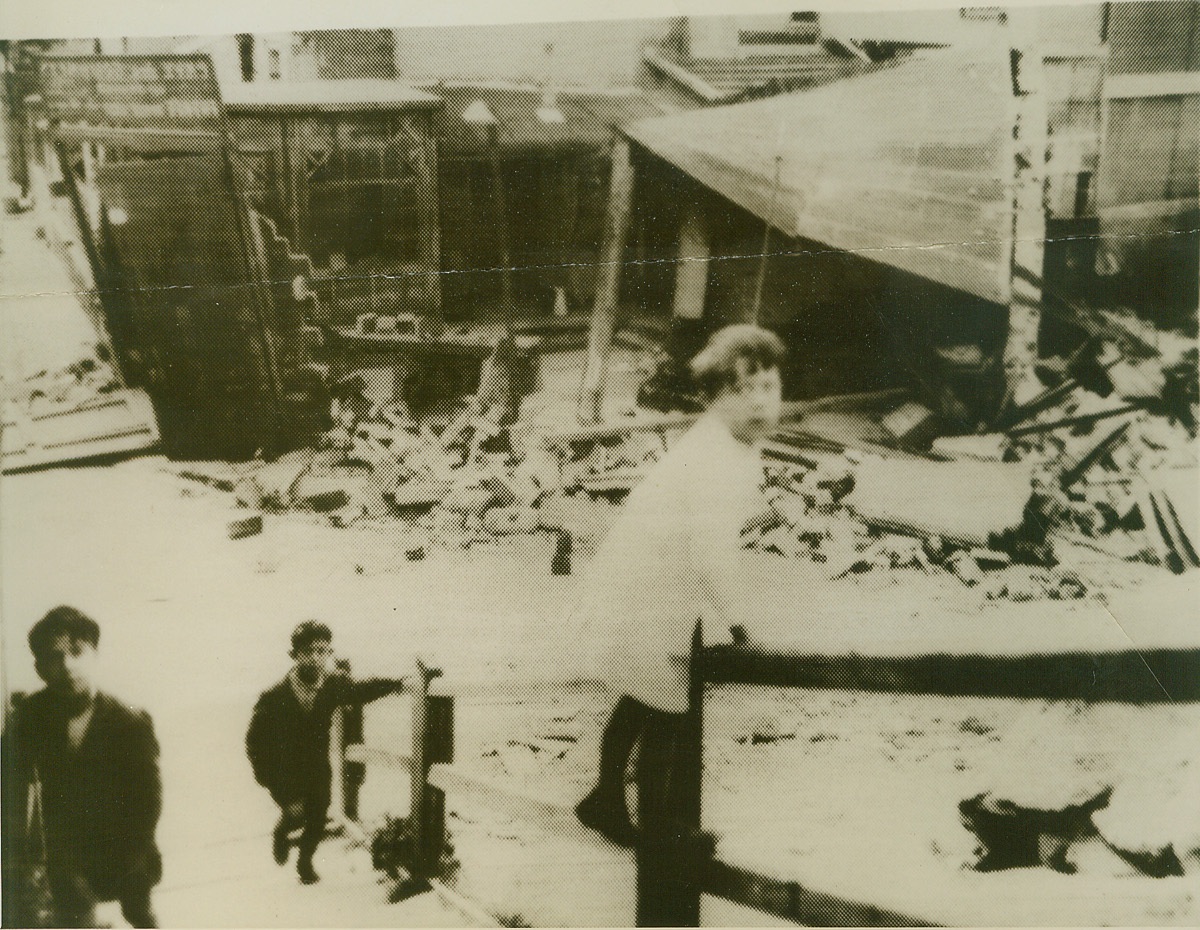 Children Play Amid Debris of Nazi Raid on Paris, 6/3/1940 Paris, France—Paris school children playing among the debris of a building wrecked in the Nazi bombing raid on Paris on June 3rd. French officials say that ten children were killed when a bomb struck a school. This picture, passed by the French censor, was flashed to New York from Paris by radio. Credit: ACME radiophoto; 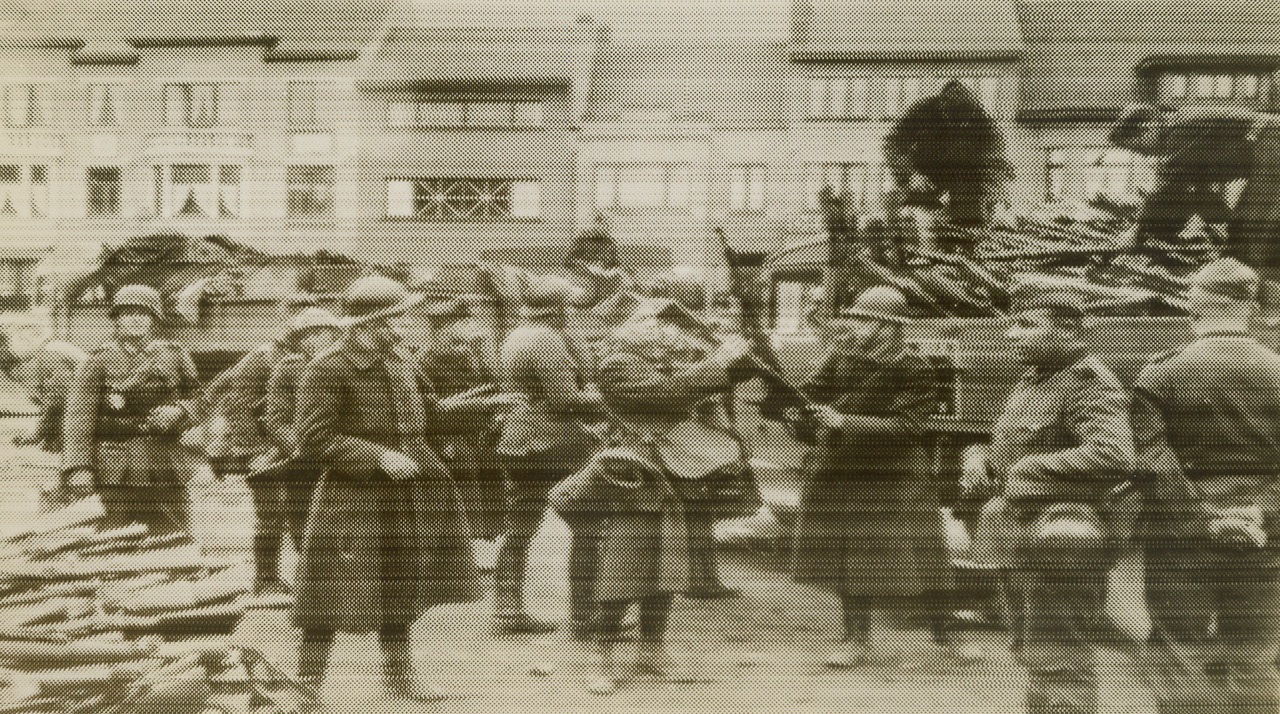 BELGIAN SOLDIERS HAND OVER THEIR ARMS, 6/3/1940 BELGIUM—Nazi censor says this radiophoto shows Belgian loading their rifles on a truck after Kin g Leopold’s recent surrender of his army to Germany. The surrendered warriors are apparently doing the work, and Nazi troops may be seen closely watching the loading. Photo flashed to New York from Berlin, June 2. Credit: Acme Radiophoto; 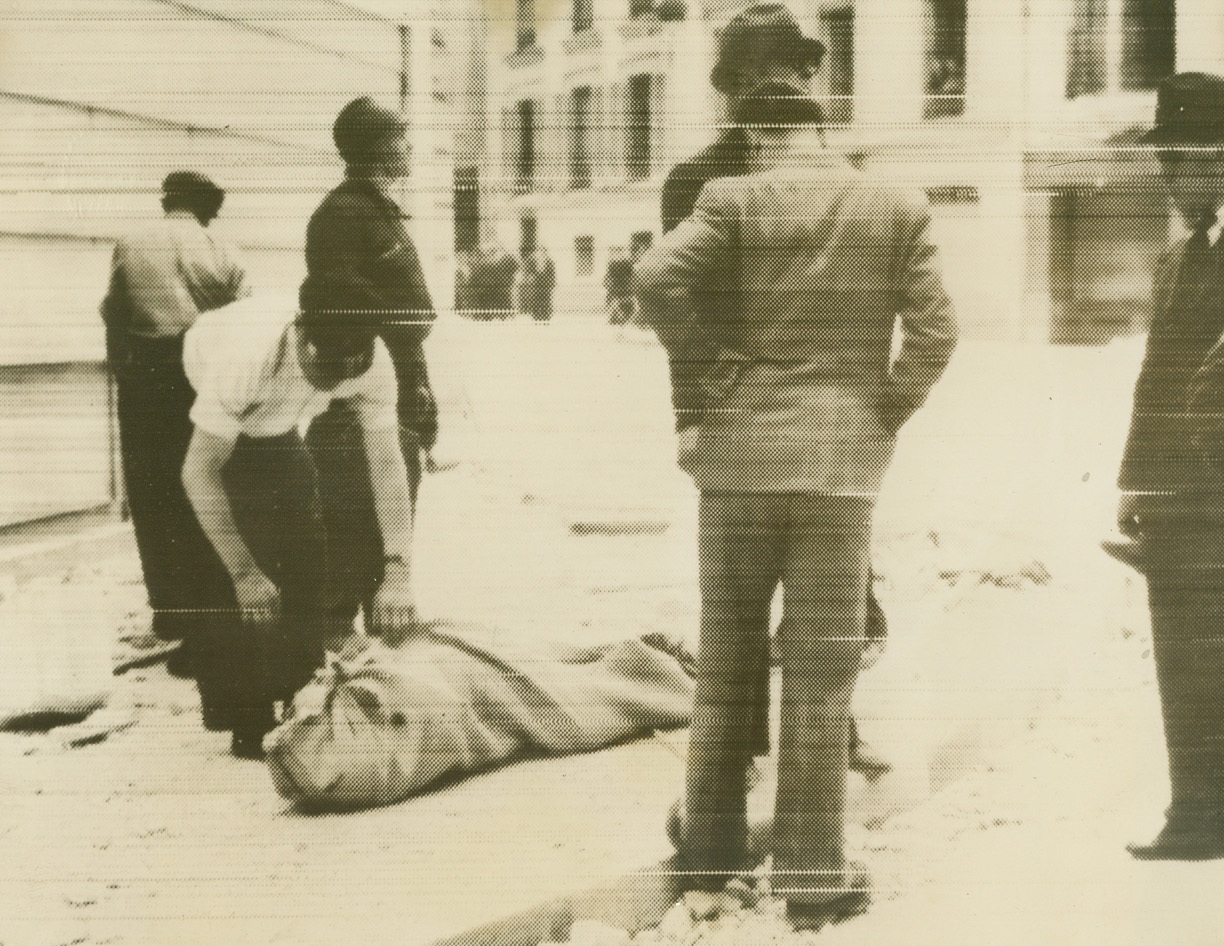 Victim of Nazi Air Raid on Paris, 6/3/1940 Paris – Air Raid precautions workers standing by the body of one of the victims of the first German Air Raid on Paris, June 2. The body is covered by a sack. Nazi bombing planes were said to have rained more than 1,000 bombs on the French capital and suburbs, causing 200 casualties, 45 of them fatal, striking five schools and killing ten children. Photo radioed from Paris to New York, June 3. Credit: ACME Radiophoto; 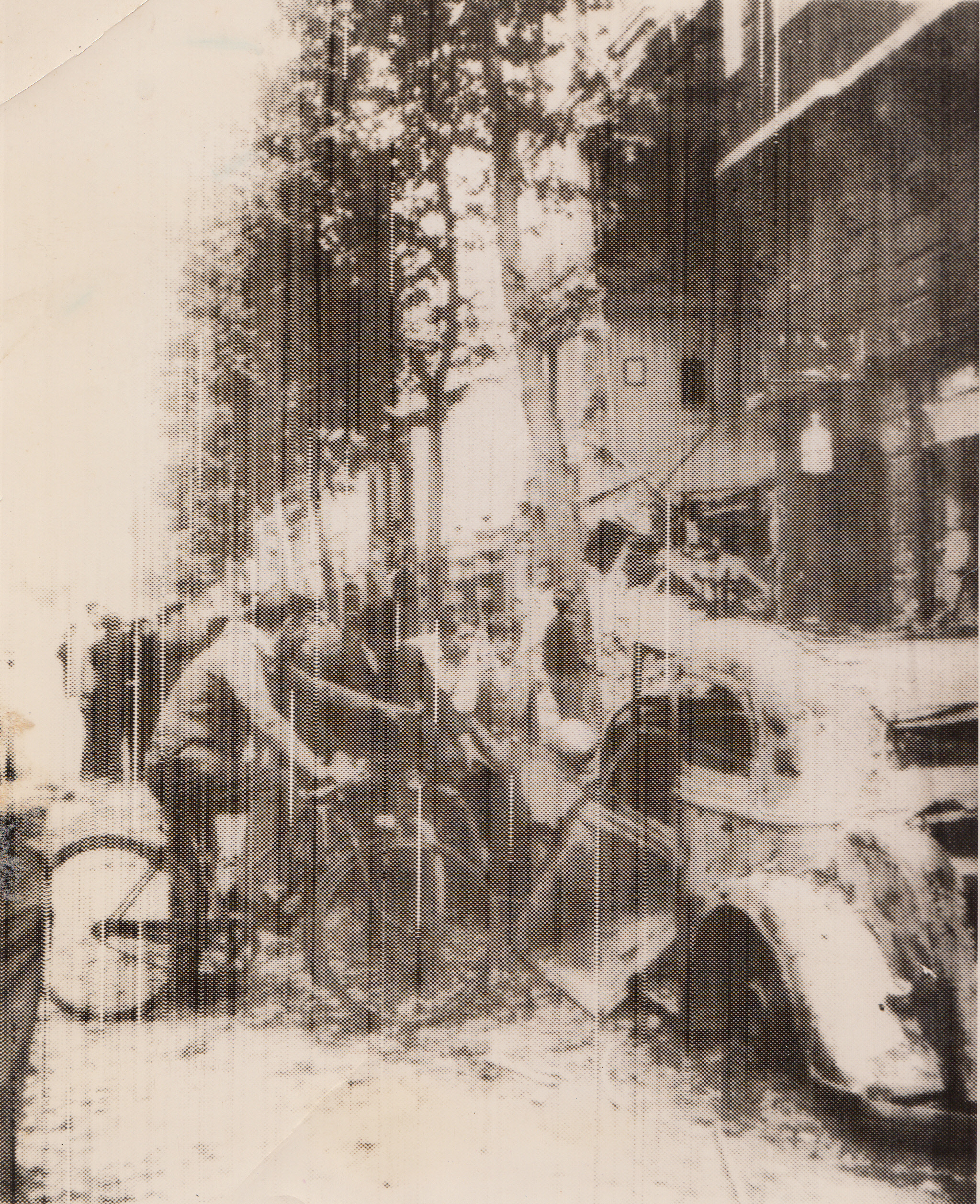 DESTRUCTION FROM THE SKY, 6/4/1940 PARIS—Parisians examine an automobile wrecked and burned, the French censor said, during a German air raid on the French Capital, June 3. Note front of building in right background has been blown out. Photo radioed from Paris to New York, June 4.; 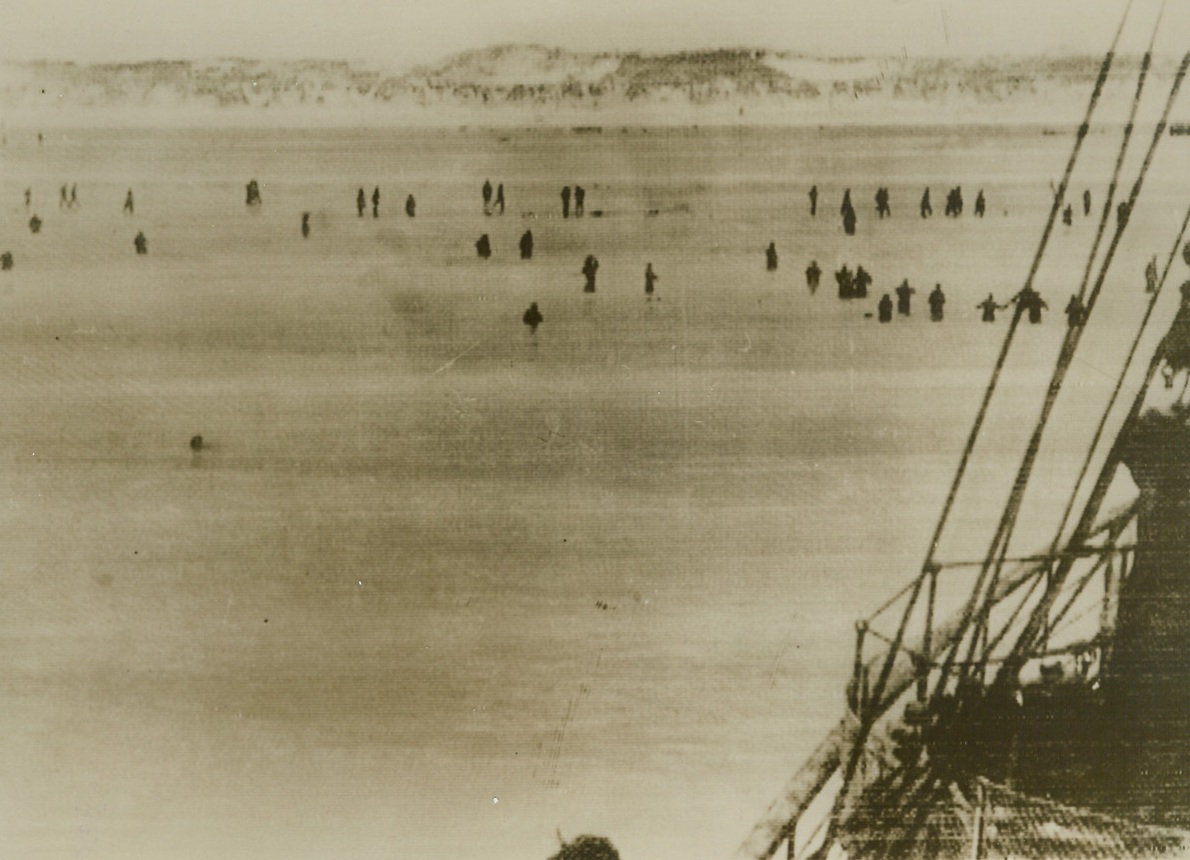 ALLIED TROOPS EVACUATING DUNKERQUE WADE TO RESCUE SHIPS, 6/4/1940 DUNKERQUE, FRANCE—Allied troops are shown wading out from the sandy beaches of Dunkerque to ships of the rescue fleet in this picture flashed to New York from London by cable, June 4th. Part of one of the rescue ships can be seen in the right foreground. The evacuation of the Allied “Lost Army” from Dunkerque was reported completed as the German high command claimed the capture of the port. Credit Line (ACME Cablephoto); 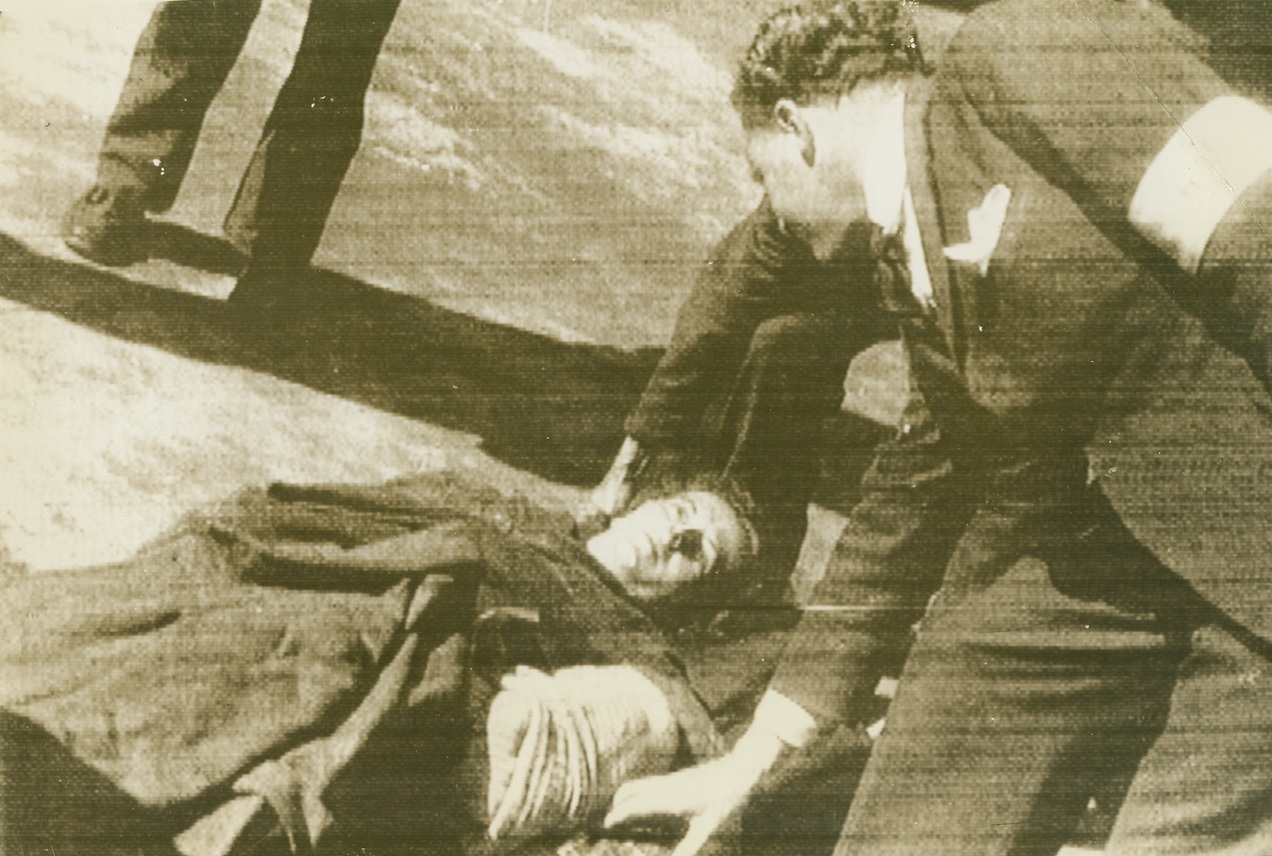 Nurses Lauded For Work At Dunkirk, 6/4/1940 London – Praise has been heaped on the nurses attending the wounded men trapped in Dunkirk, French channel port cut off by the Nazis, and on the hospital ships transporting troops back to England. One of them, wounded when a German bomb struck the hospital ship Paris crossing the channel to England, shown being taken from a hospital train. Photo flashed to New York, June 4, via cable. Credit: ACME Cablephoto; 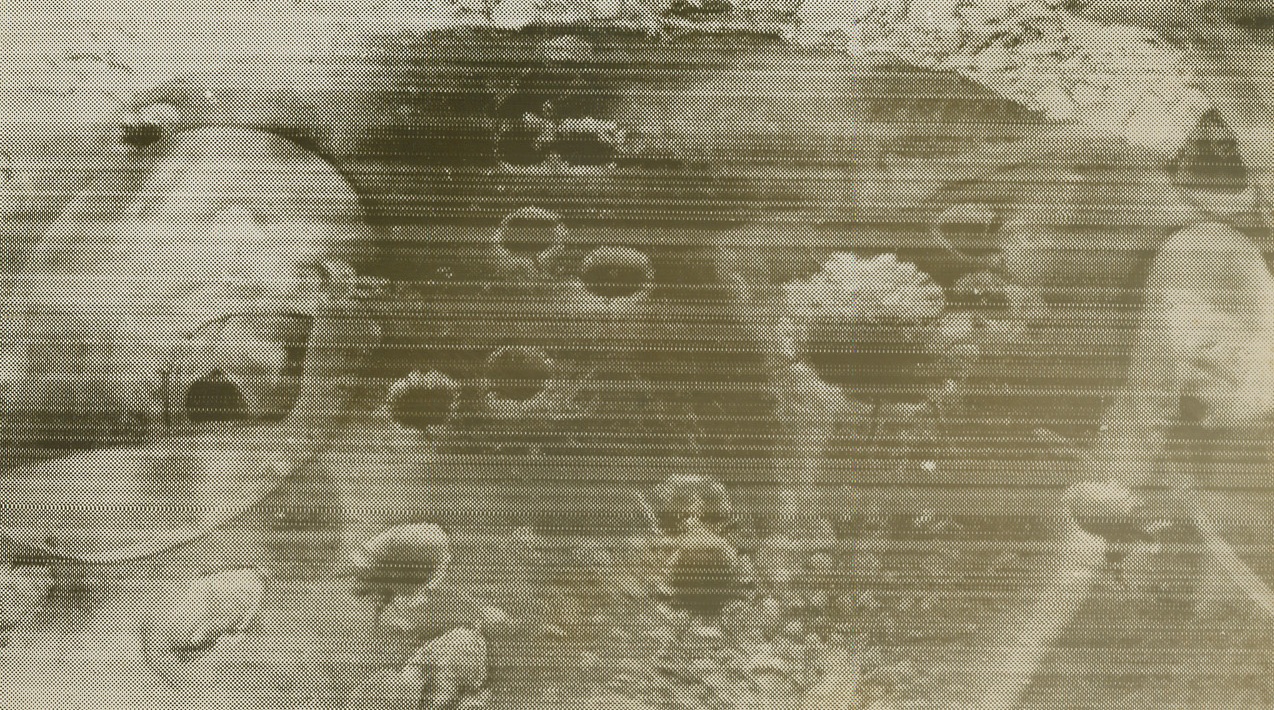 Nazis Cripple Fort on Maginot Line, 6/4/1940 Berlin – “German bomb craters in a French fort of the Maginot line” was the information accompanying this radiophoto sent to New York, June 4, after being okayed by the German censor. Credit: ACME; 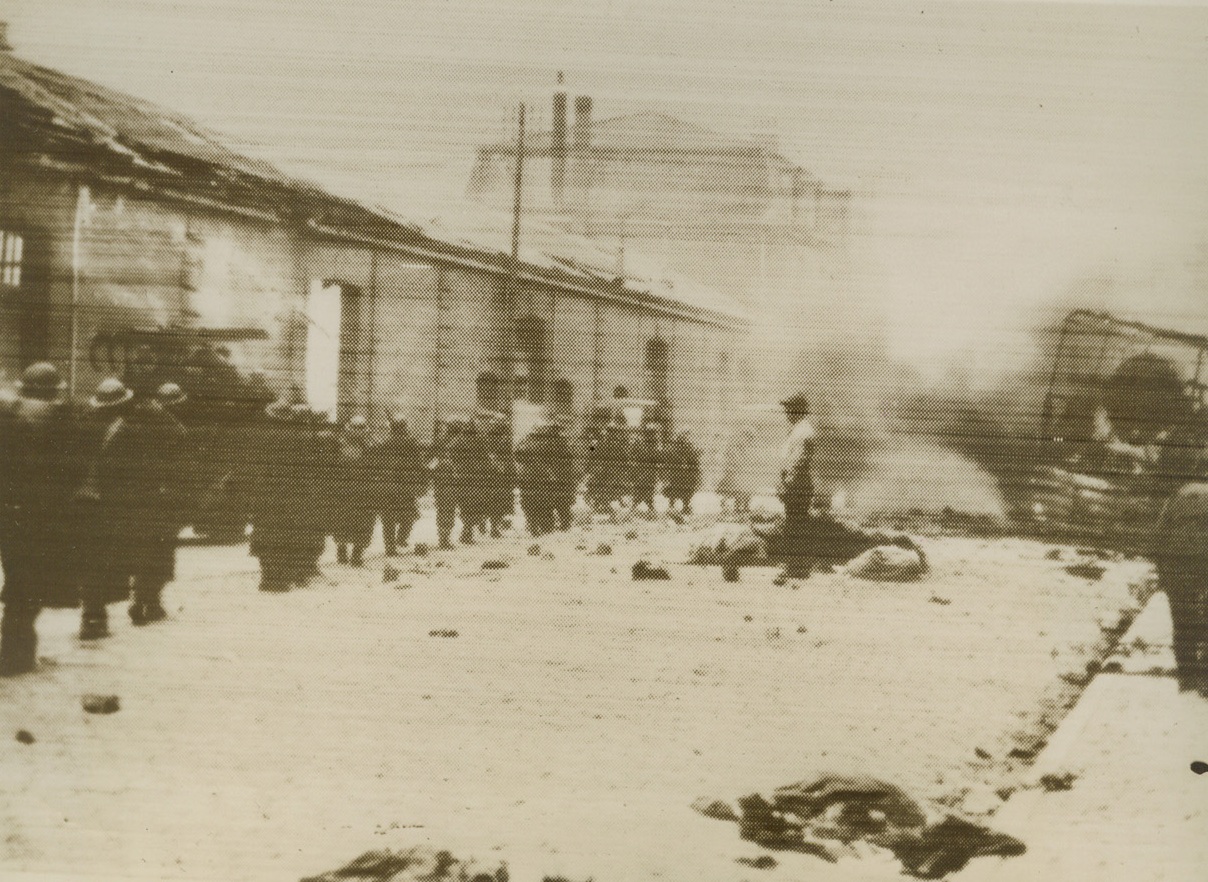 British Leaving Dunkerque in Hail of Fire, 6/5/1940 DUNKERQUE, FRANCE – The last contingent of British Expeditionary Force Troops to leave the Flanders battlefields, are shown going through Dunkerque to their embarkation point in the midst of the German bombardment, according to the French censored caption flashed here by radio with this picture, June 4.Credit: (ACME Radiophoto); 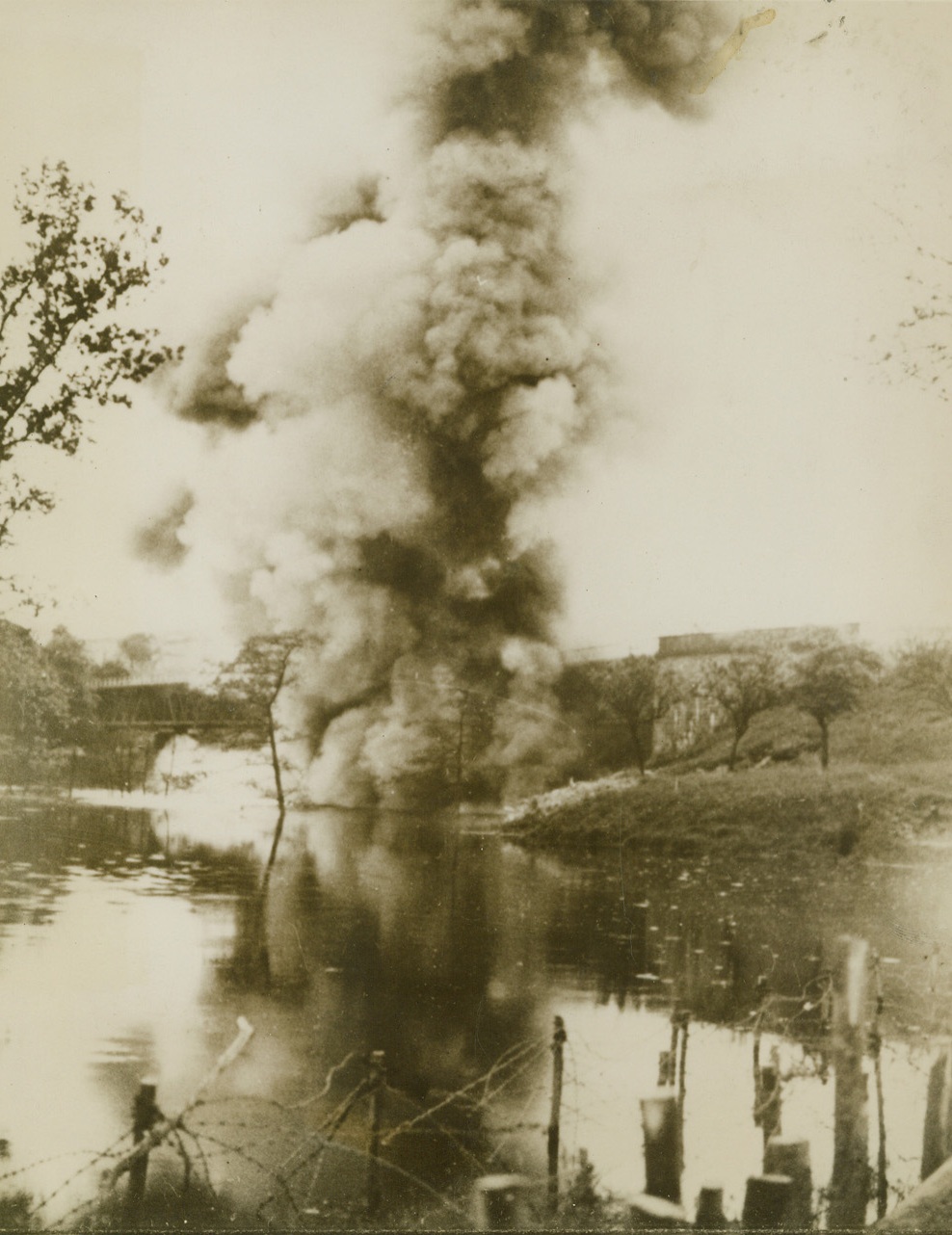 RAILWAY BRIDGE BLASTED TO HALT NAZI ADVANCE, 6/6/1940 FRANCE – A French railway bridge being blasted, presumably in an attempt to impede the German advance during the Battle of Flanders. (Photo flown to New York by Clipper) Credit: Acme; 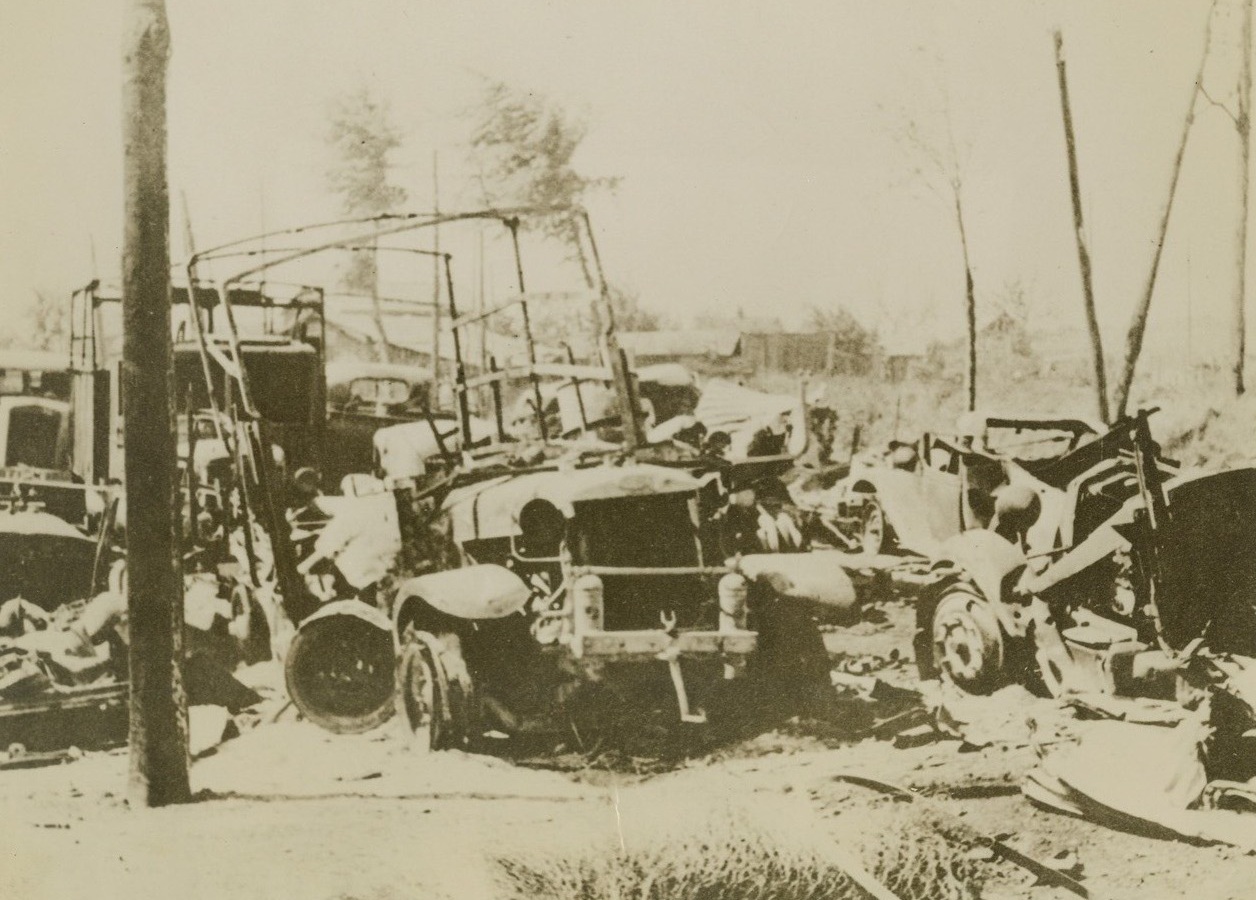 BRITISH CRUISER SUNK BY ITALIAN SUBMARINE, 6/15/1940 LONDON, ENG. – First British man o’ war to fall victim to Italy’s powerful submarine fleet, was the cruiser Calypso, 4, 180-ton warcraft shown above, An announcement by the British admiralty disclosed today, (June 15). The cruiser, built in 1917 and refitted in 1929, was sunk in the Mediterranean. It’s normal complement was more than 400 officers and men. Credit: Acme; 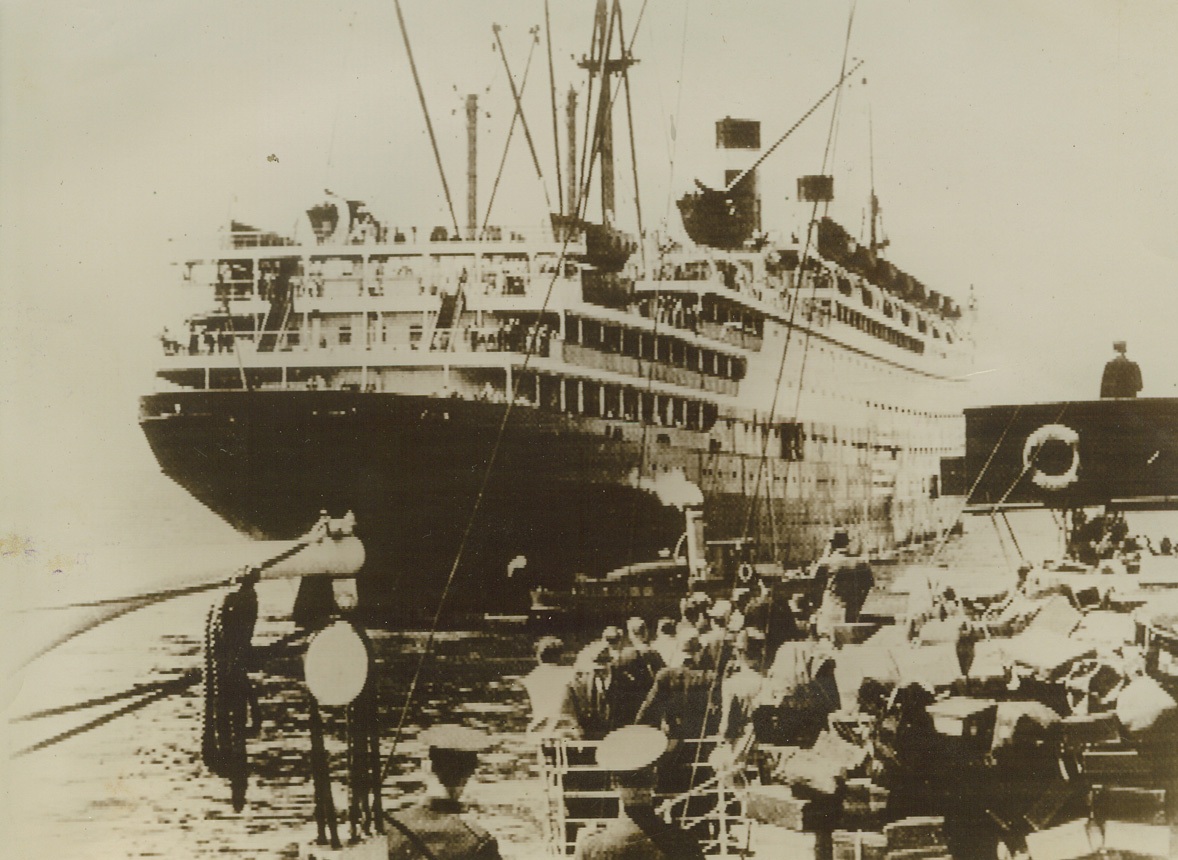 Refugee Liner Sails for U.S, 6/16/1940 GALWAY, IRELAND—The United States liner Washington leaving Galway, Ireland, with more than 1,000 American war refugees on board. The ship narrowly escaped torpedoing off the coast of Portugal, while in route from Italy to Ireland, when a U-boat stopped it. Credit: ACME CABLEPHOTO.; 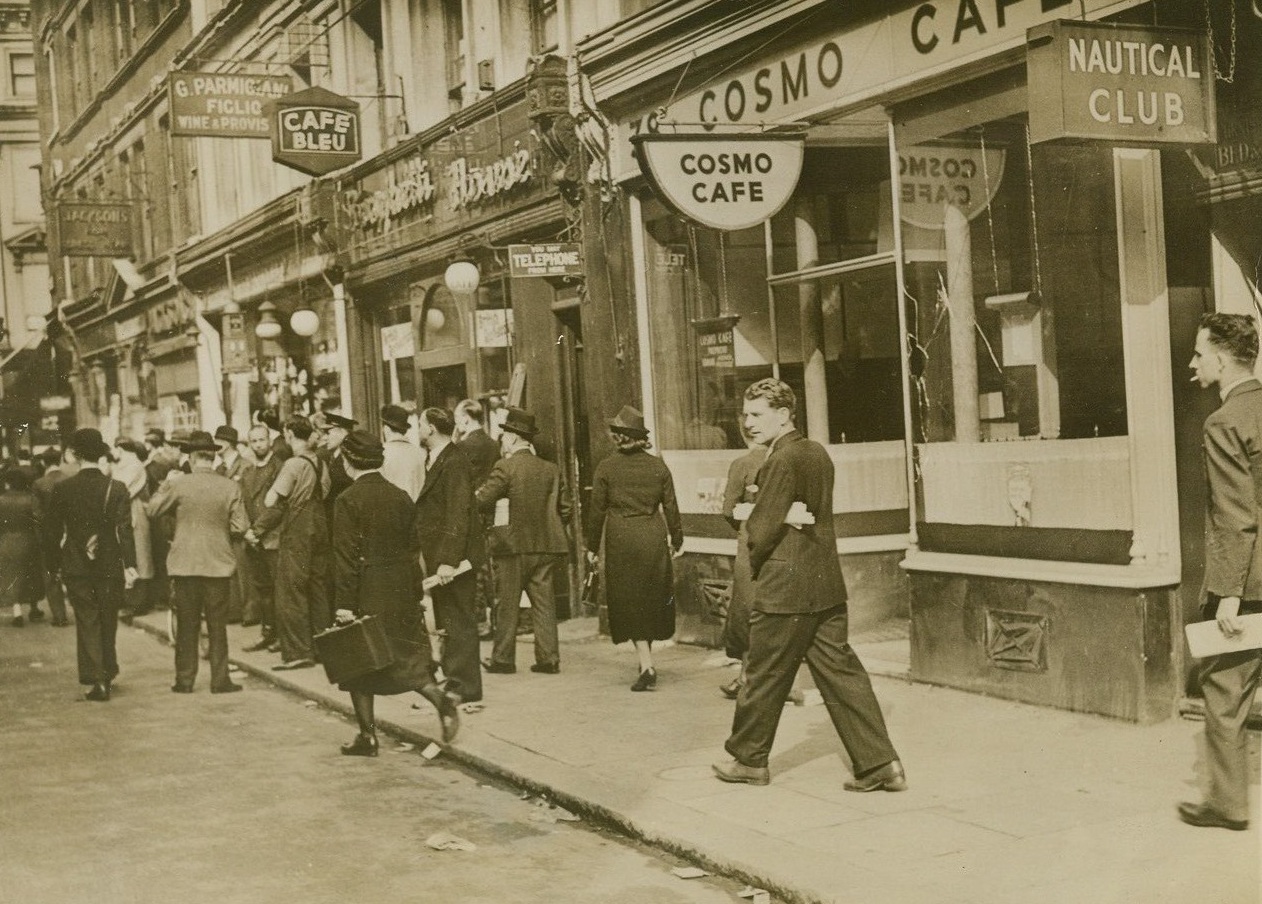 ANGRY ENGLISHMEN GATHER IN LONDON’S ITALIAN SECTION, 6/20/1940 LONDON – Angry crowns were still gathering in Old Compton Street. London’s Italian settlement. The day after Mussolini announced his country’s entrance into the war. Many miner disturbances resulted in damage such as the smashed café window at right.Credit: Acme; 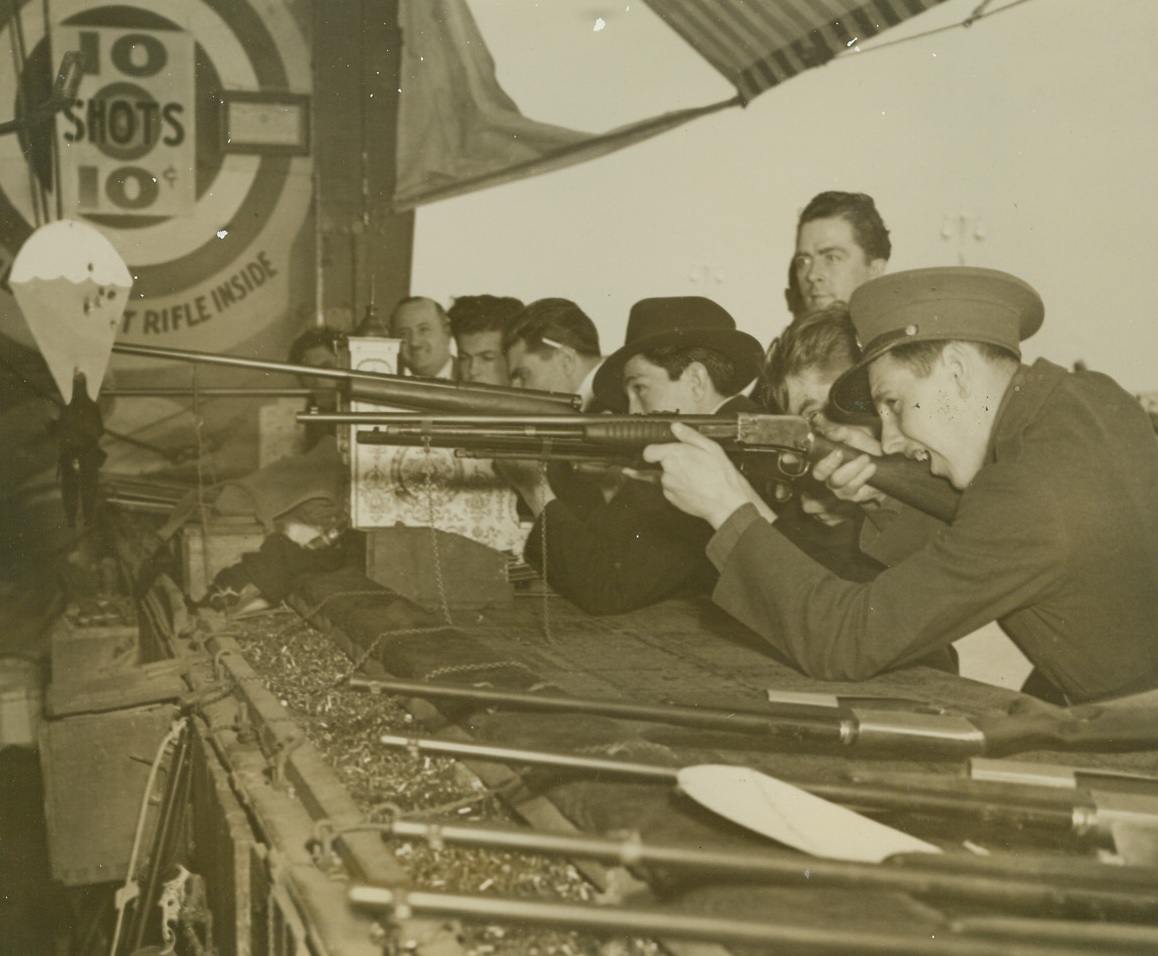 “Parachute Troops” Get the Works at “Coney Island.”, 6/30/1940 New York City—The latest innovation at Steeplechase Park, Coney Island, is a shooting gallery in which the targets are “Parachute Troops.” Pleasure seekers at the resort prefer these targets to the conventional floating ducks and similar targets. The “jumpers” float down from the ceiling of the gallery and are popped at as they descend. One of the much perforated targets is seen floating down while would-be marksmen shoot at others. Credit: ACME.; 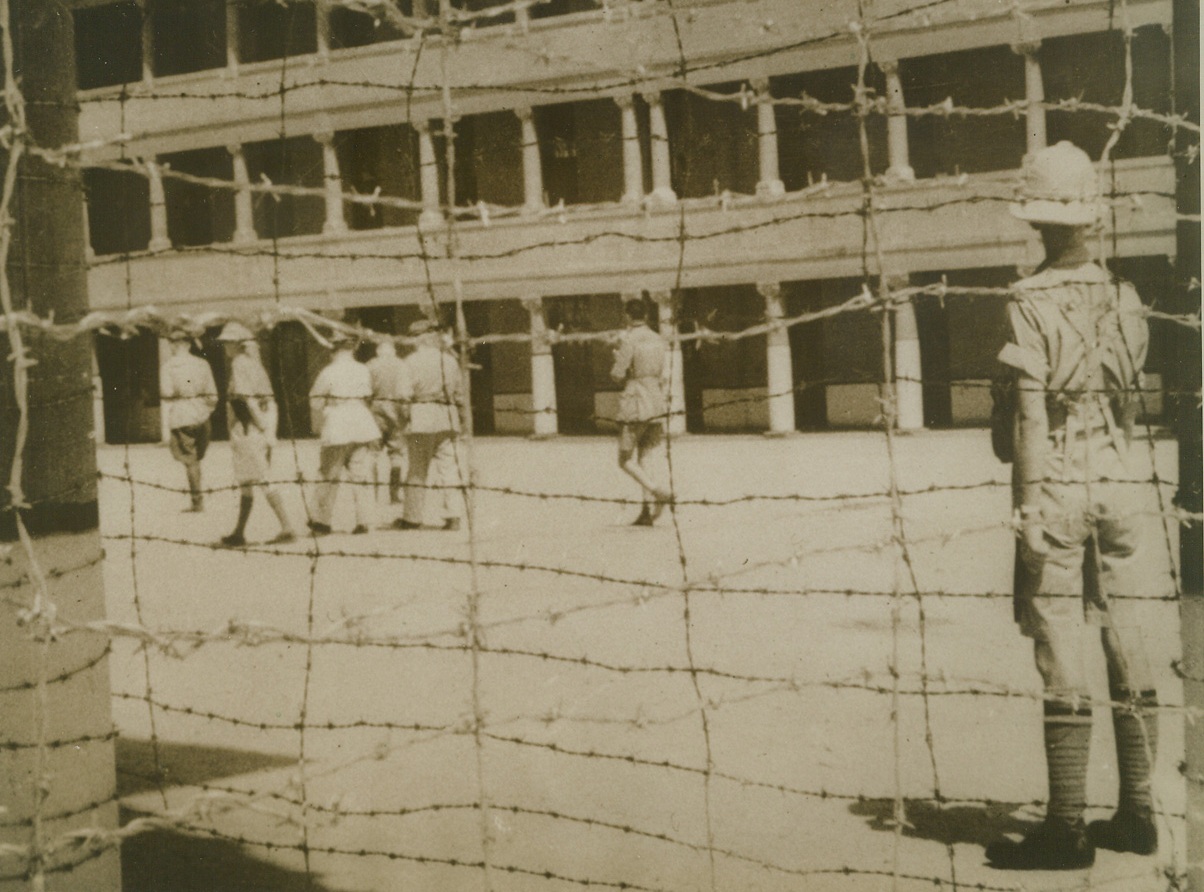 Italians in British Prison Camp, 7/11/1940 Egypt—Italian officers, among the first prisoners taken in fighting on the Eastern front, walking inside the barbed-wire enclosure of a British prison camp in Egypt.Credit: ACME.; 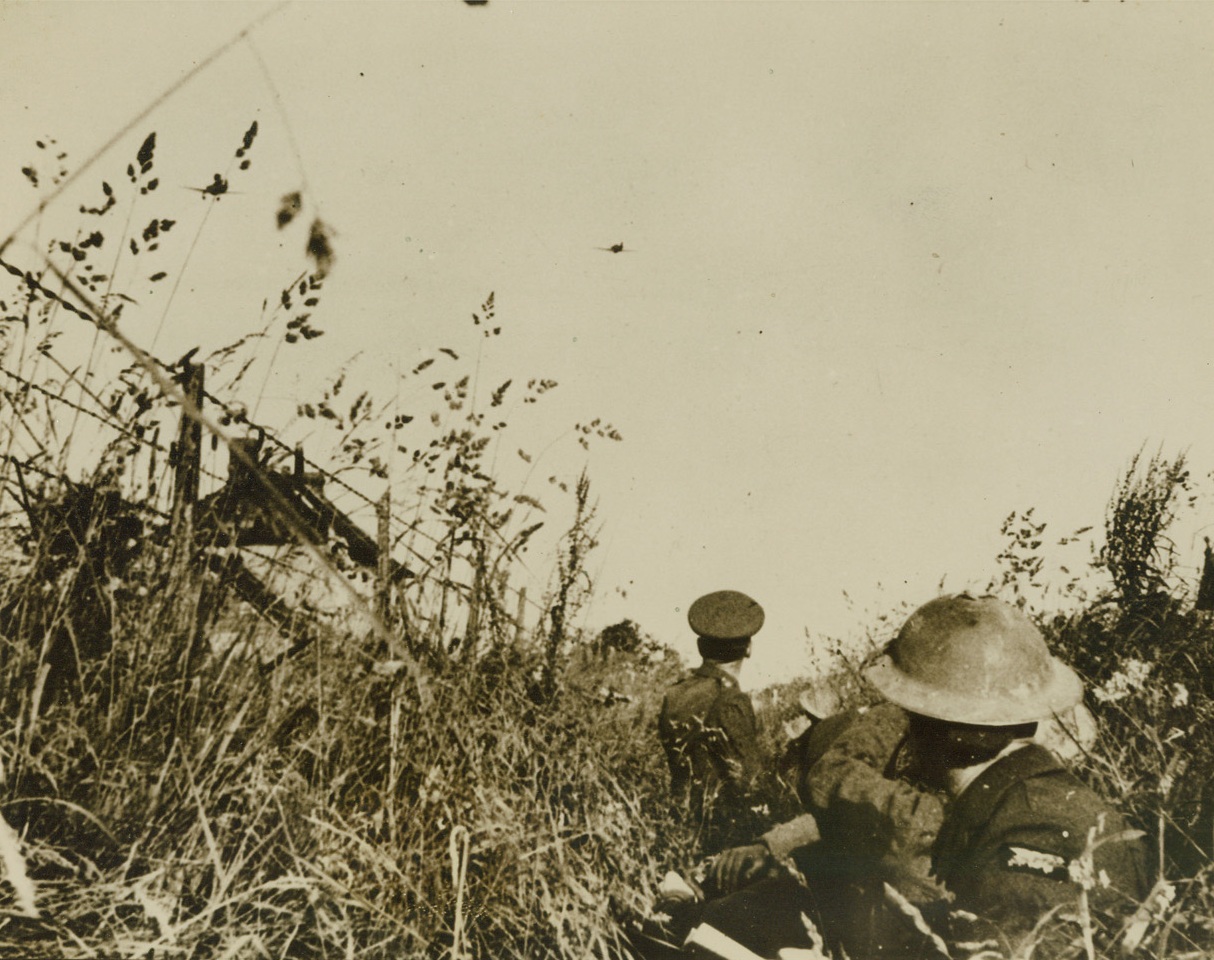 Last Stand, 7/11/1940 France – Taking cover amid a ripening crop, Irish soldiers, fighting their way back to the coast before the collapse of France watch a bomber drop destruction on the Former Republic. Credit: ACME; 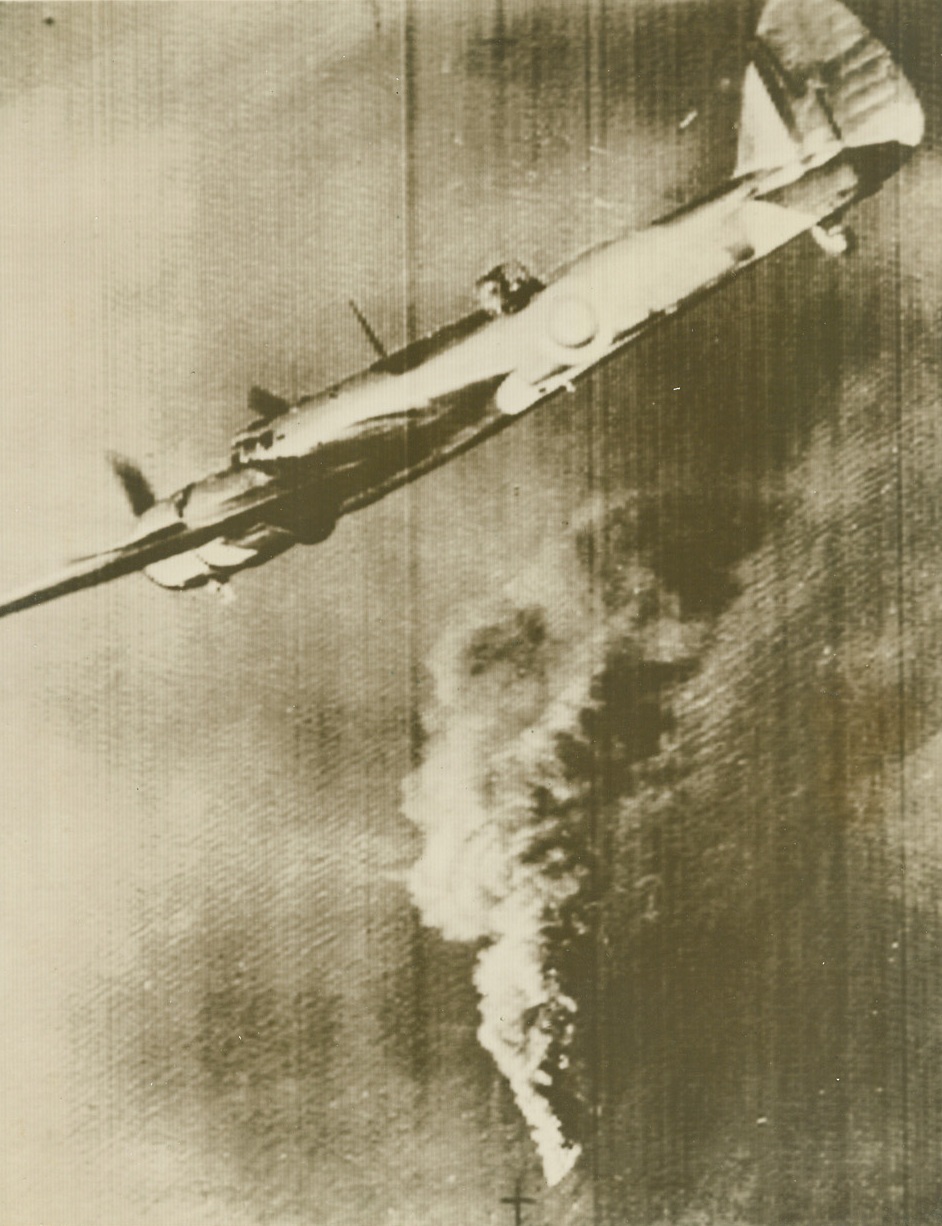 Tanker Blazes in the Channel, 7/14/1940 London – A British bomber flies above a blazing enemy tanker in the English Channel as Great Britain lashes out against enemy shipping in reprisal to raids upon her own merchant marine. Photo passed by British censor and sent from London to New York via Western Union cable, July 14th. Credit: ACME; 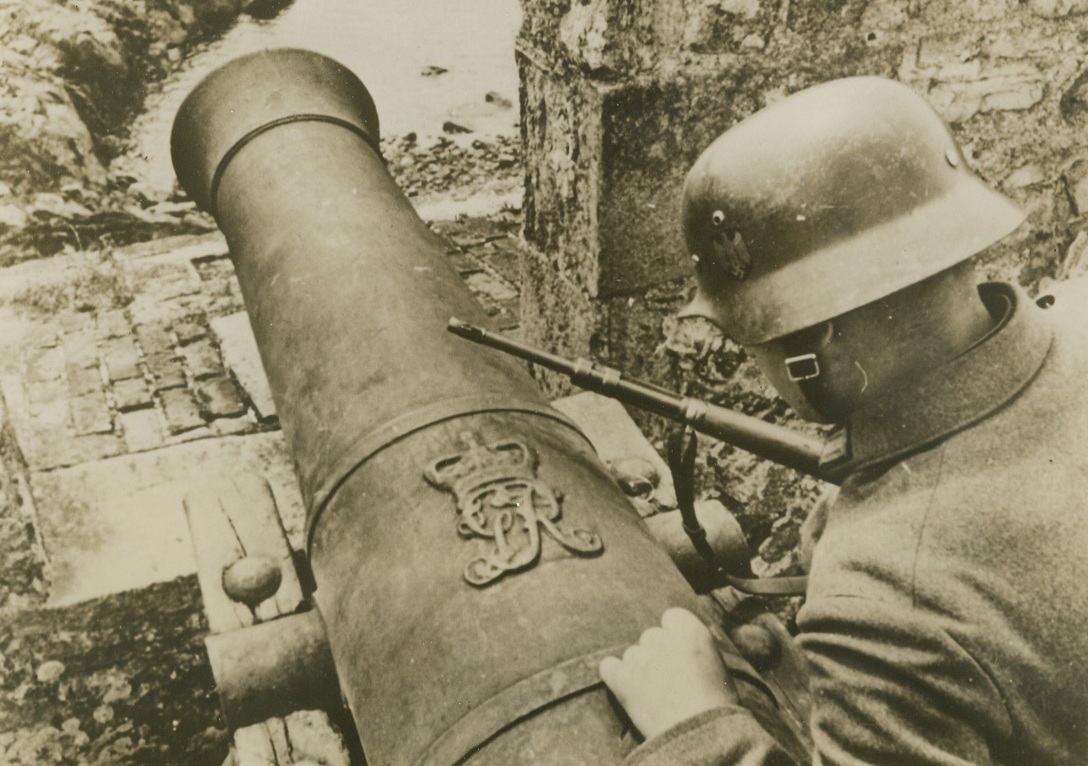 Emblem of the Enemy, 7/27/1940 ISLE OF JERSEY—A German soldier examining the British Royal Emblem on a cannon on the Isle of Jersey, as the British Possession, in the English Channel near France, along with the nearby Isle of Guernsey, was occupied by Nazi forces. Credit: ACME.; 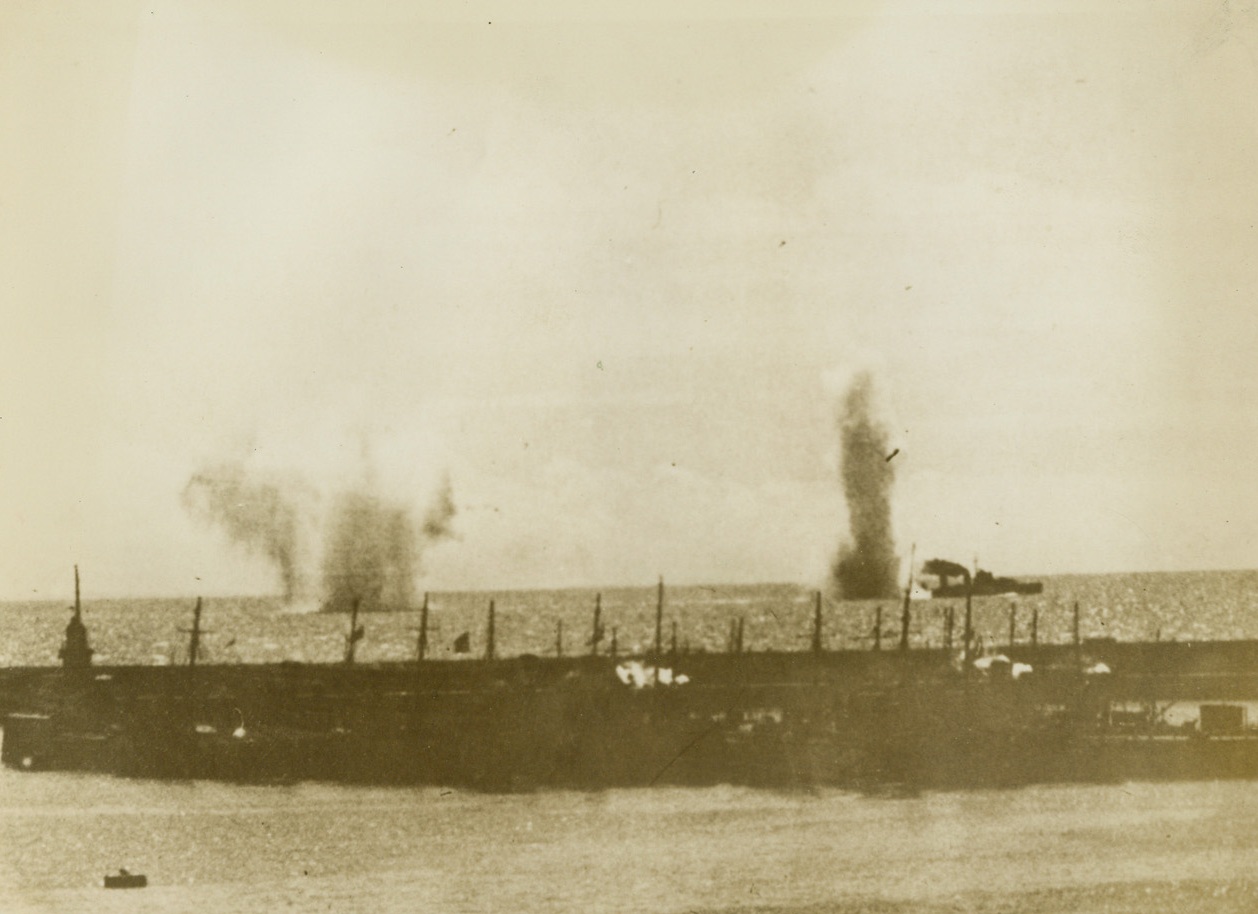 Dive Bomber Attack On British Convoy, 7/29/1940 Southeast Coast of England - This remarkable picture, one of the first ever taken of an air attack on a shipping convoy, was made as massed German Dive Bombers, protected by swarms of Messerschmitt Fighting Planes, dropped their deadly cargoes around a convoy on the Southeast coast of England. Great columns of water can be seen rising from bombs bursting in the sea near a British Destroyer. A group of ships can be seen in the foreground. This picture was made during the first massed air raid against England. British sources say that 150 planes engaged in a furious battle around the convoy and that ten of the Nazi craft were destroyed. Passed by British Censor Credit: ACME; 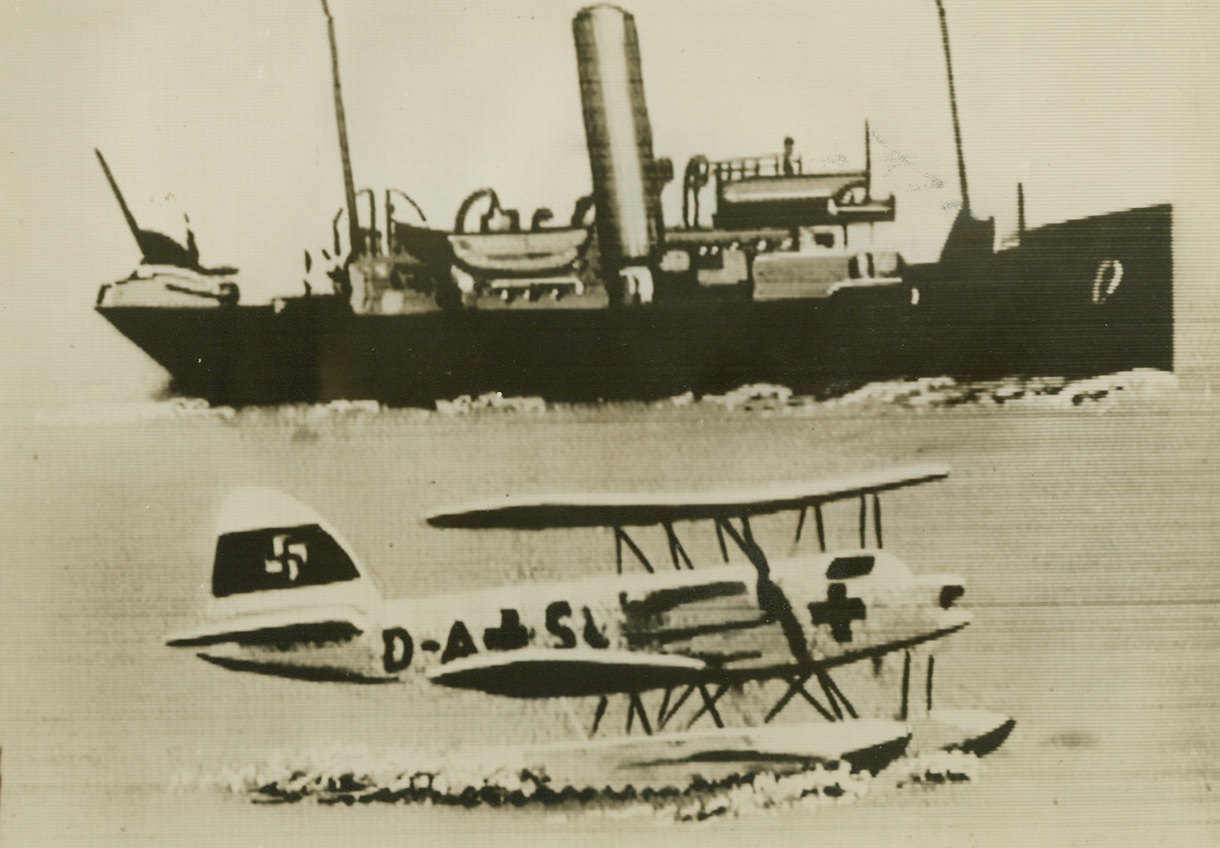 CAPTURE NAZI PLANE DISGUISED WITH RED CROSS, 7/30/1940 LONDON – A German seaplane marked with the Red Cross down on the sea after being captured by the British royal air force, who shot down two such planes yesterday. According to British authorities German planes bearing the Red Cross have been making scouting flights over British convoys and doing other reconnaissance work in violation of international law, and henceforth would operated near the British Isles at their own risk. In the background is the boat that picked up the crew of the German plane. Passed by British censor and sent to New York by Western Union cabel, July 30th.Credit: Acme;