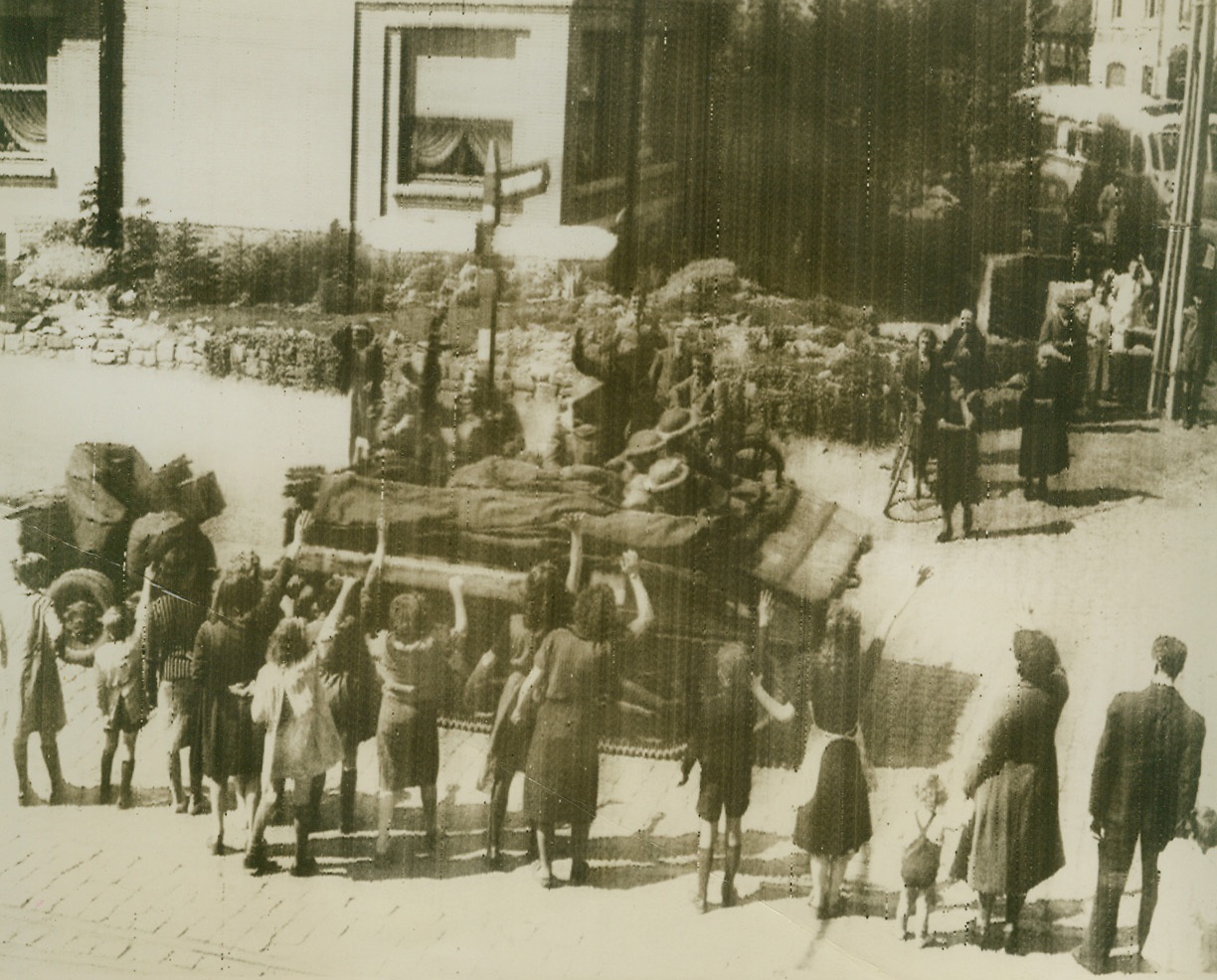 Tommies Move Up to Aid Belgians, 5/11/1940 BELGIUM – Women and girls hailing British soldiers as an Allied tank rumbles through a Belgian village to aid against German invasion of the country. Thousands of Tommies are pouring over the border to take up battle stations behind tanks and guns of all descriptions. Few men of the town are seen in the picture, apparently because they have been called to the colors. Photo radioed from London to New York, May 11.Credit: (ACME Radiophoto); 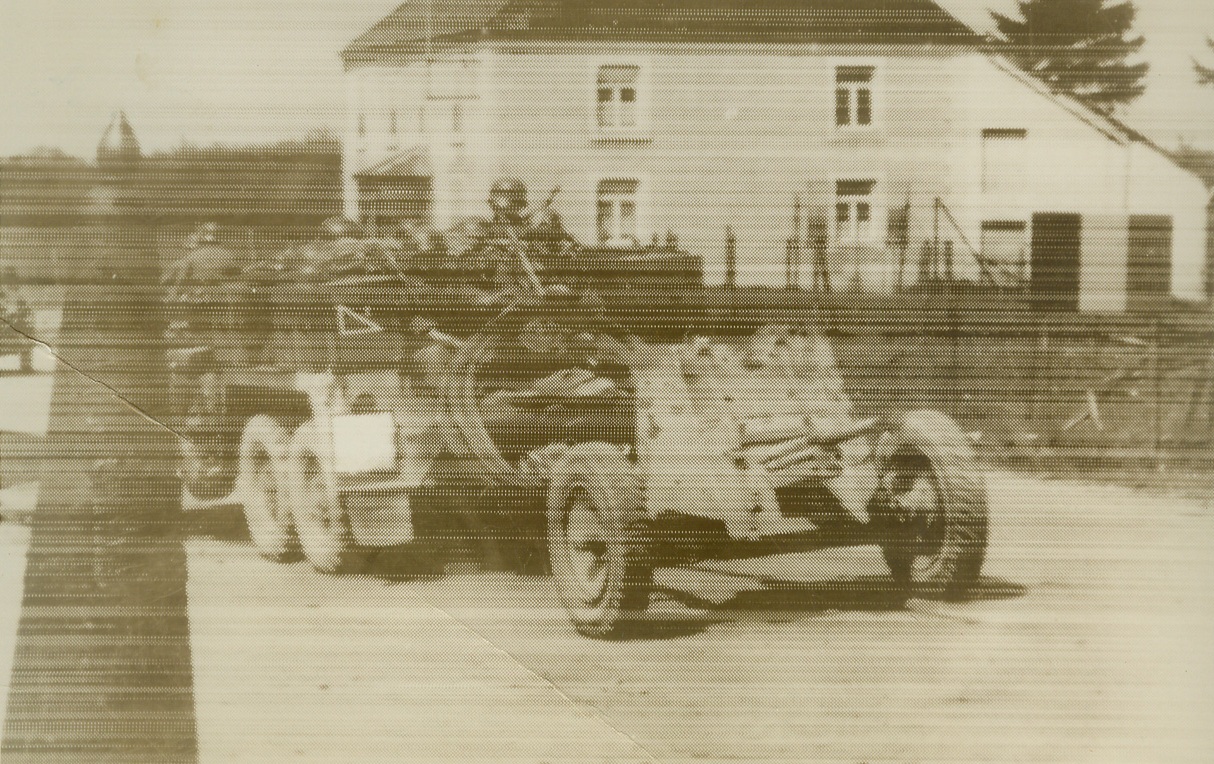 Nazi War Machine Rolls into Belgium, 5/11/1940 LUXEMBOURG-BELGIAN BORDER – A mechanized unit of the German army shown on Belgian soil, just after rolling past a post (left) marking the Luxembourg-Belgian border, at the outset of the swift Nazi invasion of the low countries. Steel-helmeted troops may be seen riding in the huge lorry, which is towing a light field piece. Photo radioed from Berlin to New York, May 11.Credit: (ACME Radiophoto); 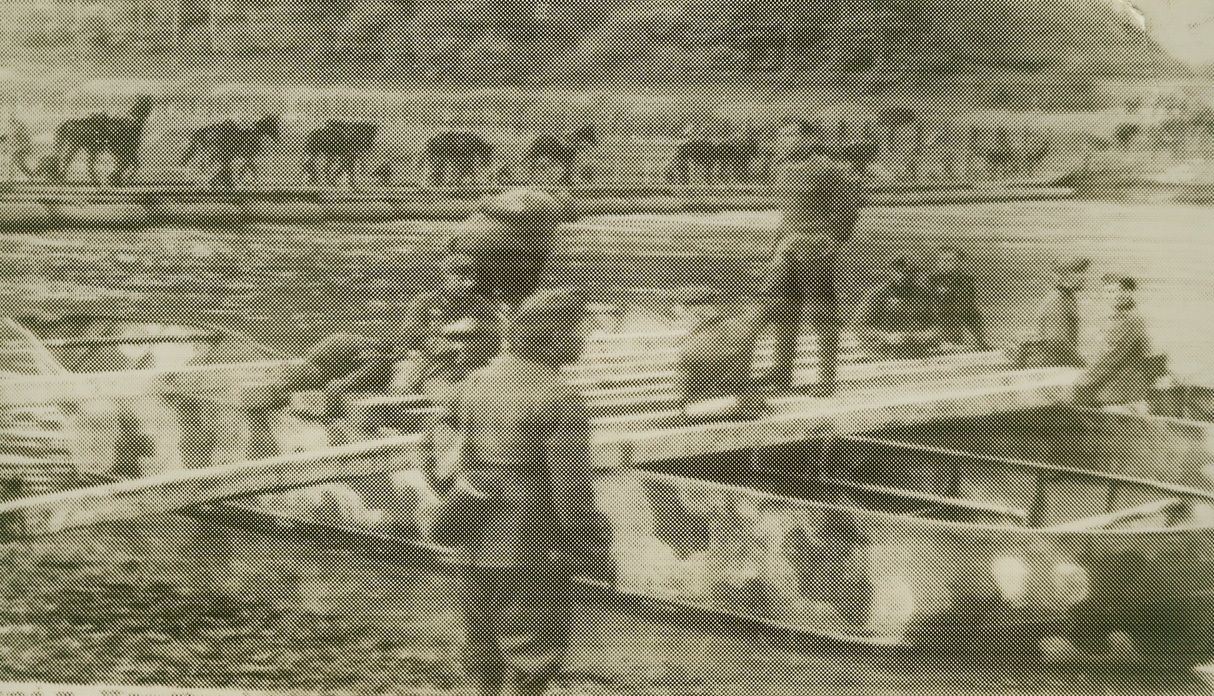 Bridges to aid the Invader, 5/12/1940 BERLIN – An engineering detachment of German Pioneer Corps throwing a pontoon bridge across an undisclosed river during the onslaught against Holland and Belgium. In the background may be seen a column of horses crossing another pontoon bridge. Horses strike an odd note among modern mechanized forces, but they can traverse muddy or flooded areas that halt tanks and tucks.Credit: (ACME); 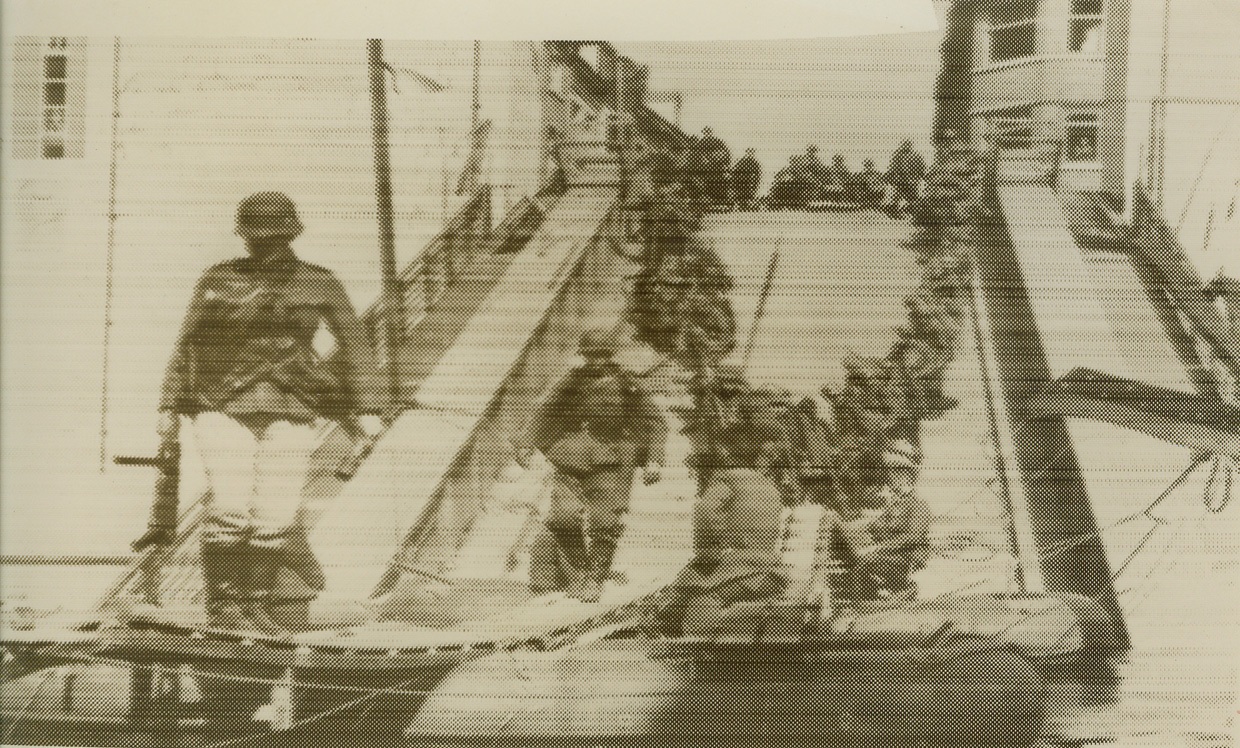 Nazi Warriors Advance in Holland, 5/14/1940 MASSTRICHT, HOLLAND – According to the Nazi-censored caption for this radiophoto, flashed from Berlin to New York, May 14, German troops are shown crossing a wrecked bridge at Masstricht, Holland, after improvising a pontoon crossing. The bridge was apparently blown up to impede the Nazi advance. The Dutch high command issued a proclamation, May 14, ordering cessation of fighting on the main defensive fronts in Holland, but said that the fight would continue against German forces in Zeeland.Credit: (ACME Radiophoto); 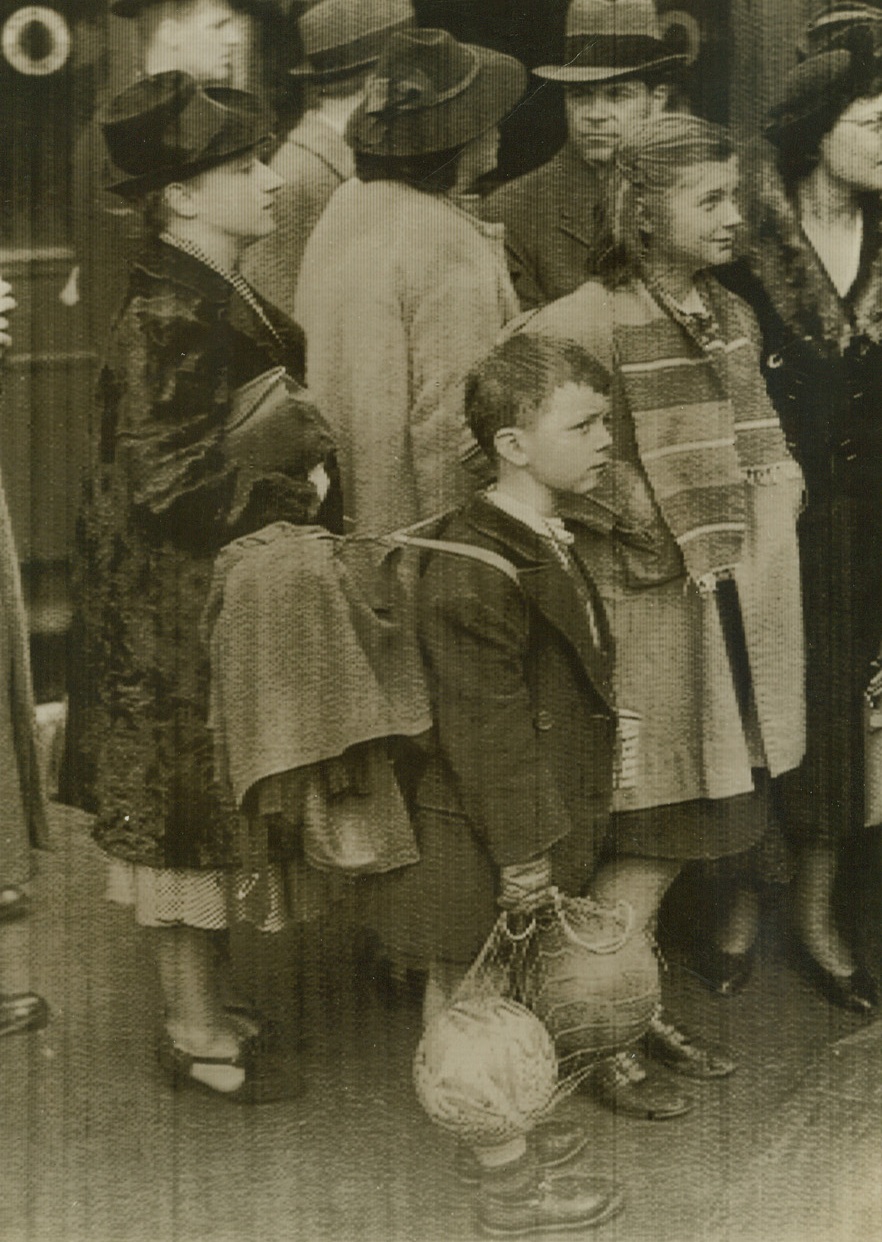 Dutch Children Arrive in London, 5/14/1940 London - Child refugees from Rotterdam and vicinity shown with their luggage and toys as they arrived in London, May 14. The Dutch High Command issued a proclamation later in the day ordering cessation of fighting on the main defensive fronts in Holland. Photo flashed from London by cable. Credit: ACME Cablephoto; 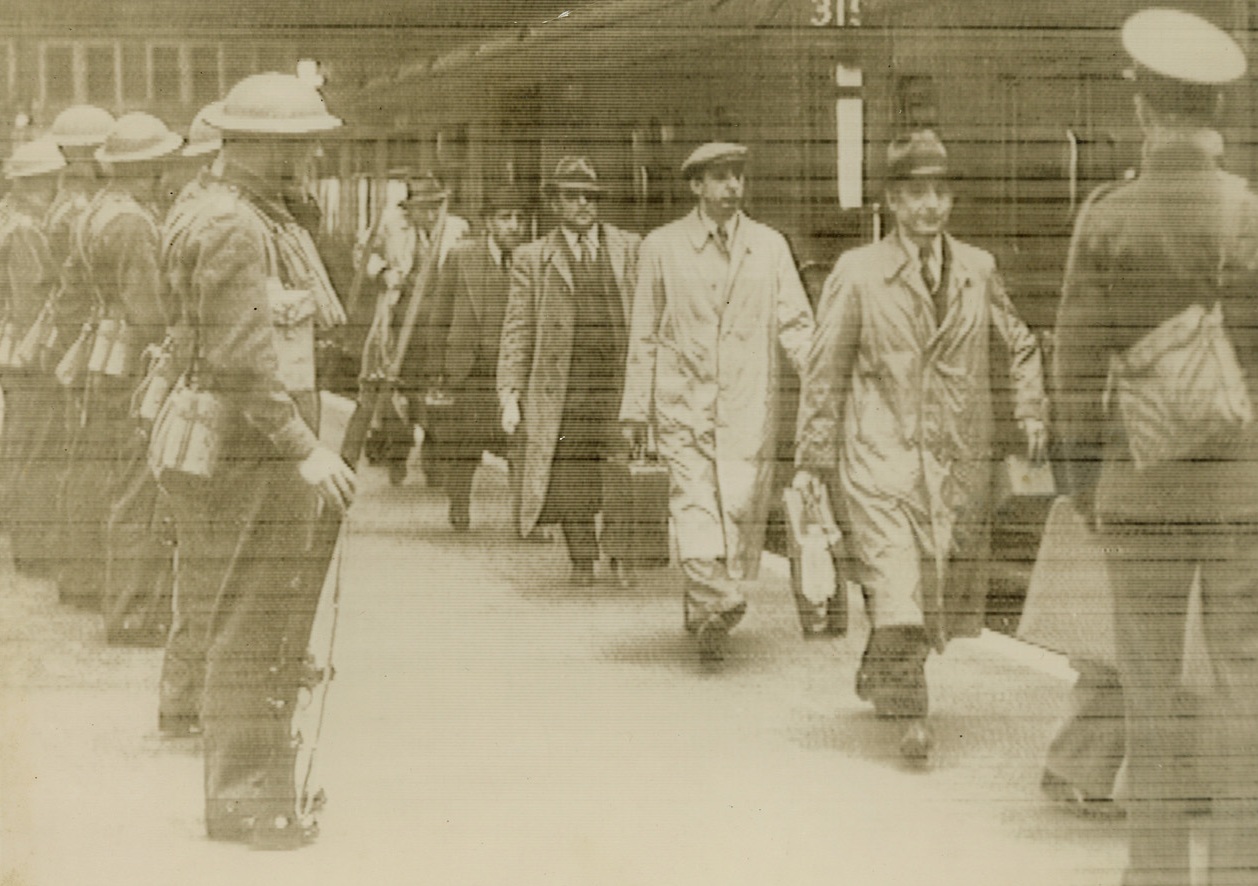 Britain on Guard Against Fifth Column, 5/17/1940 England—Armed troops rounding up aliens in the campaign to rid the British Isles of Nazi elements that might aid in a possible German coup of England. Intense precautions have been taken in fear of a parachute invasion of Great Britain, with male German and Austrians being hustled off to internment camps. Pedestrians are scanned to make certain they are not German soldiers in disguise. Credit: ACME cablephoto.; 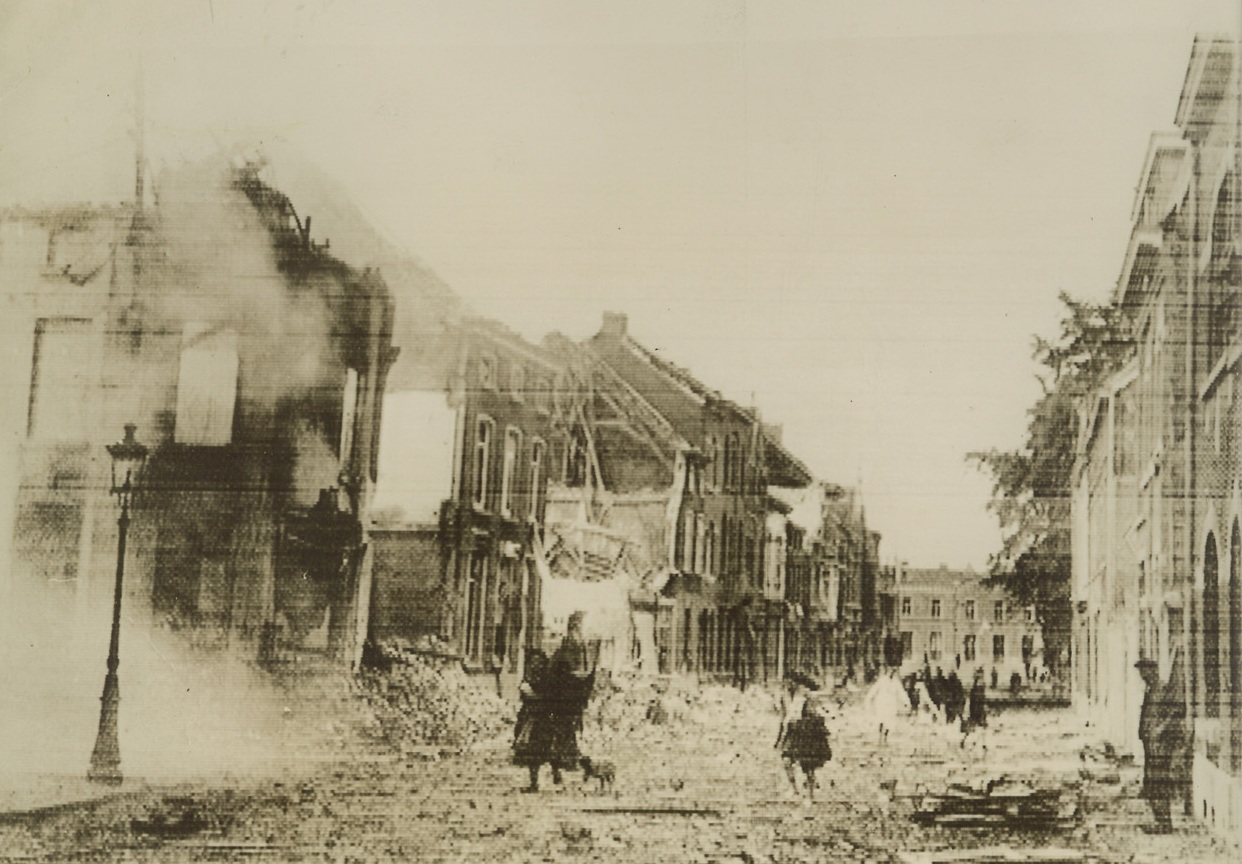 Remains of Louvain, 5/18/1940 LOUVAIN, BELGIUM—Remaining inhabitants of Louvain, Belgian town which was devastated during the World War and rebuilt largely with American funds, pick their way over heaps of debris lying in the street and past houses gutted and shattered by Nazi bombs in the 1940 invasion. The photo rushed to London, whence it was transmitted to New York via cable. Credit: ACME.; 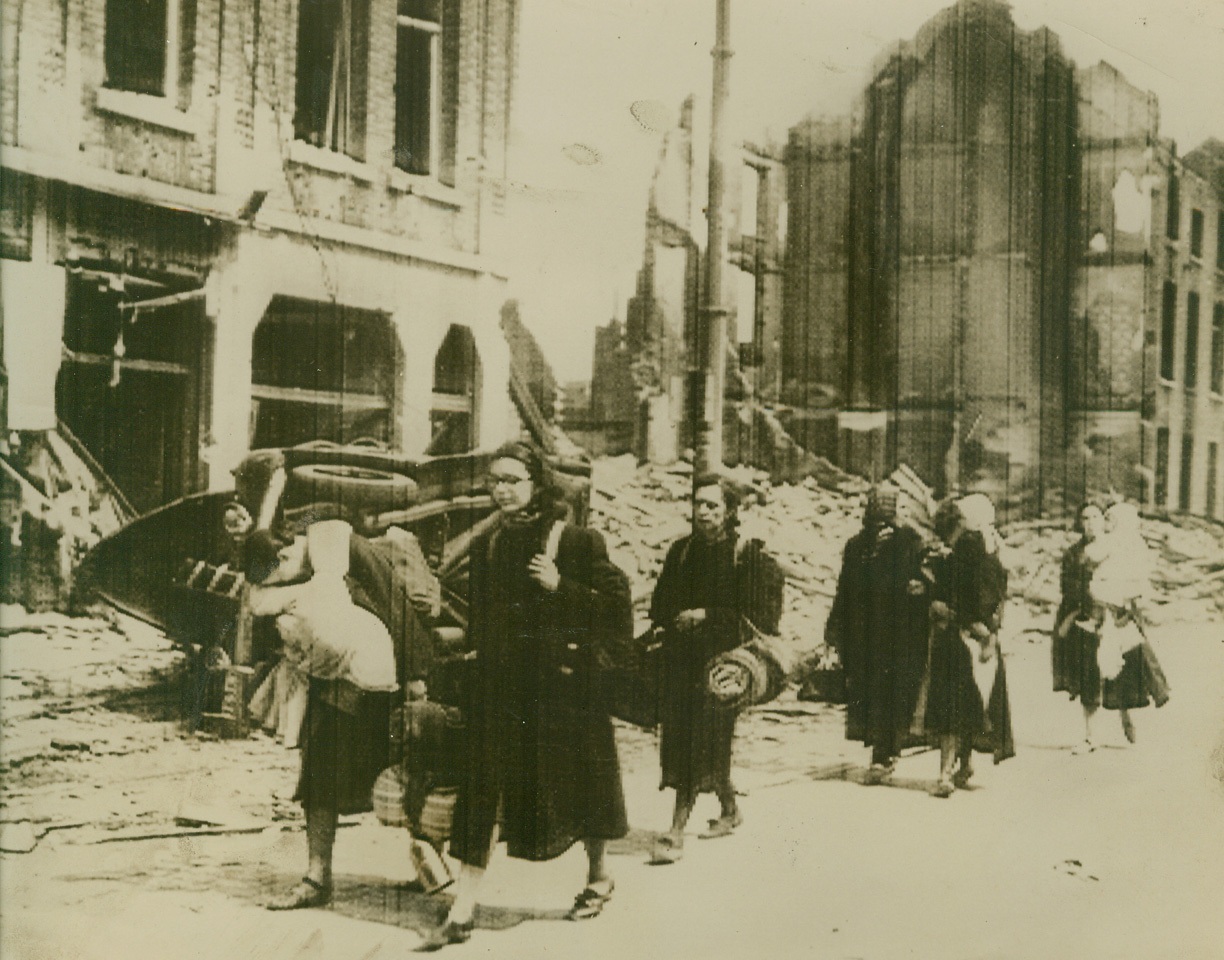 Seeking Shelter Amid War Ruins, 5/18/1940 LOUVAIN, BELGIUM – Belgian refugees trudging through a bomb-wrecked Louvain street in search of shelter, according to the British-censored caption for this cablephoto flashed from London to New York, May 18. Some carry babies, others carry their only possessions. Credit Line (Acme); 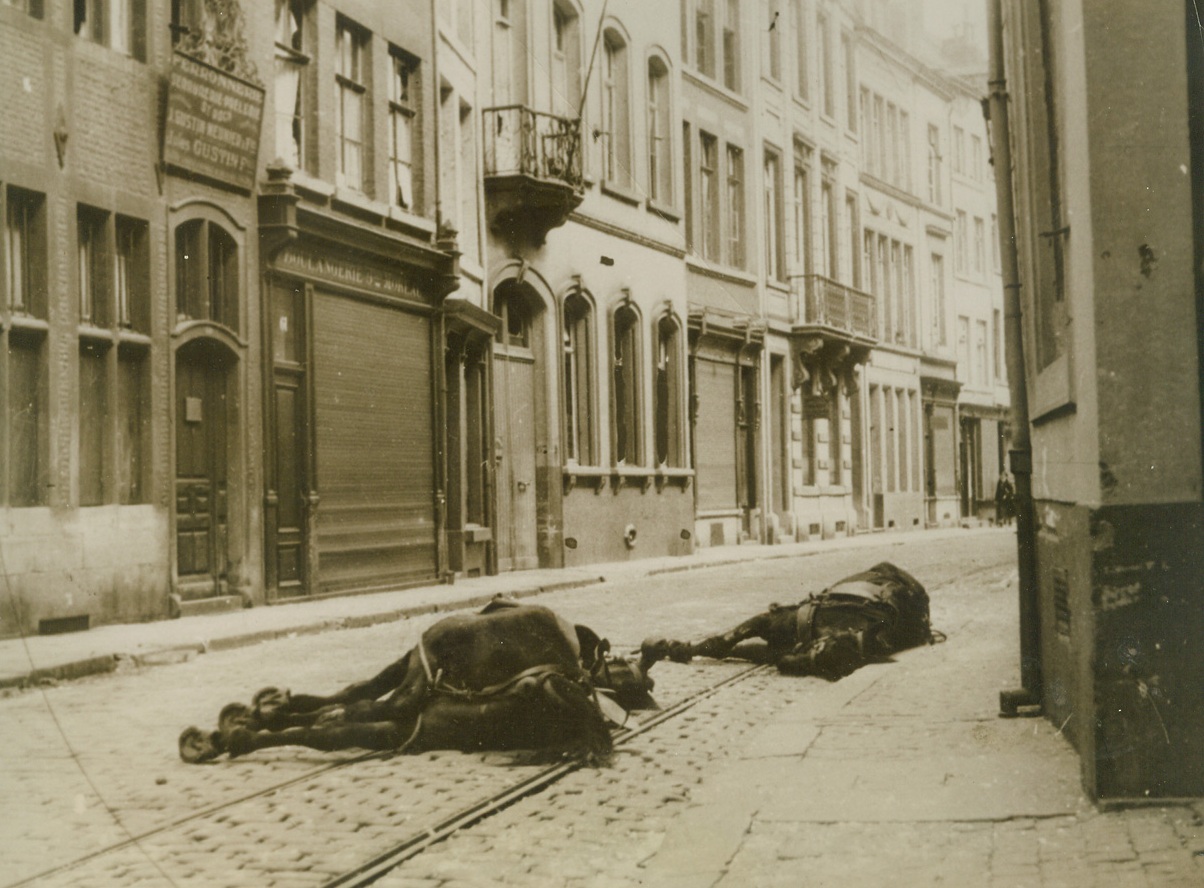 ANIMAL CASUALTIES OF NAZI BOMBING IN BELGIUM, 5/20/1940 NAMUR, BELGIUM—Horses killed during the German air attacks on Belgium, lying in the deserted streets of Namur. Credit: Acme; 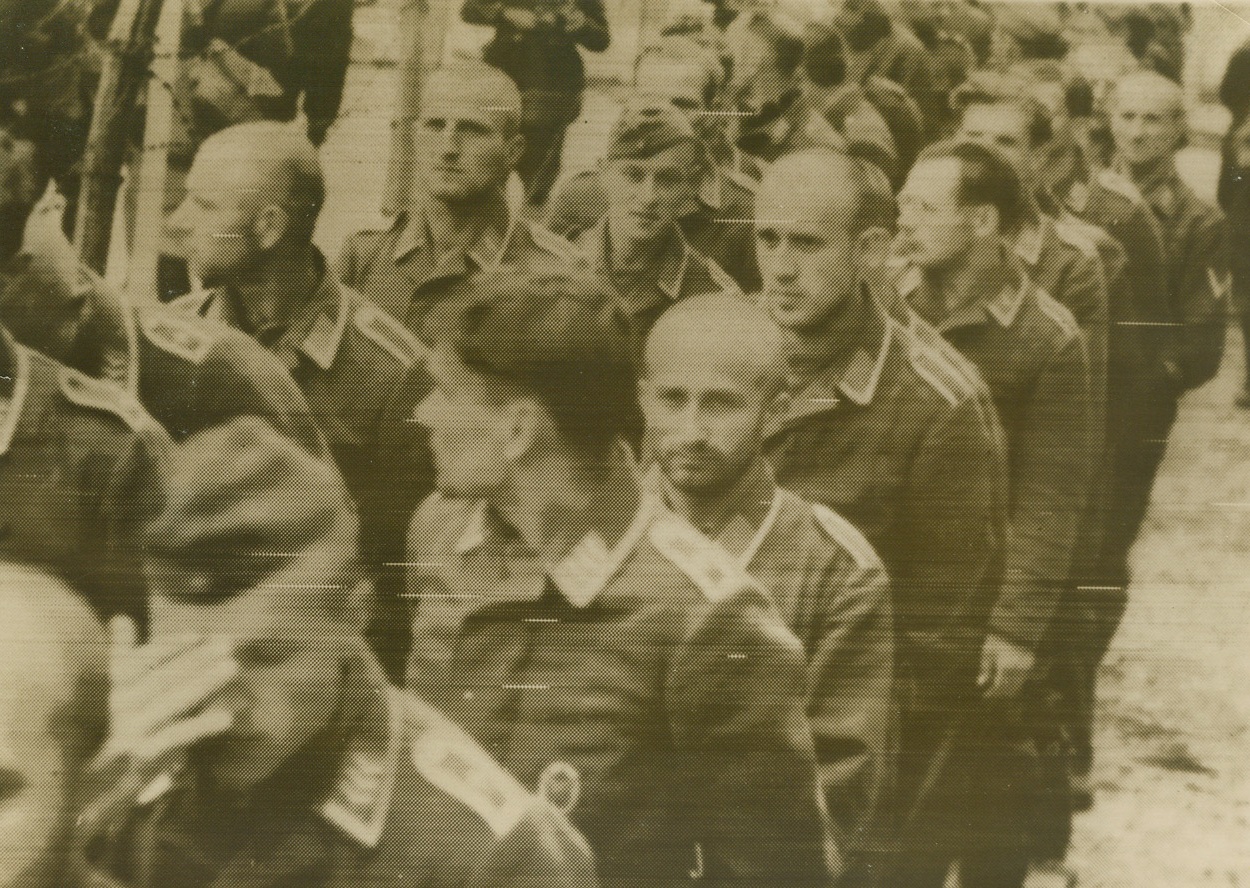 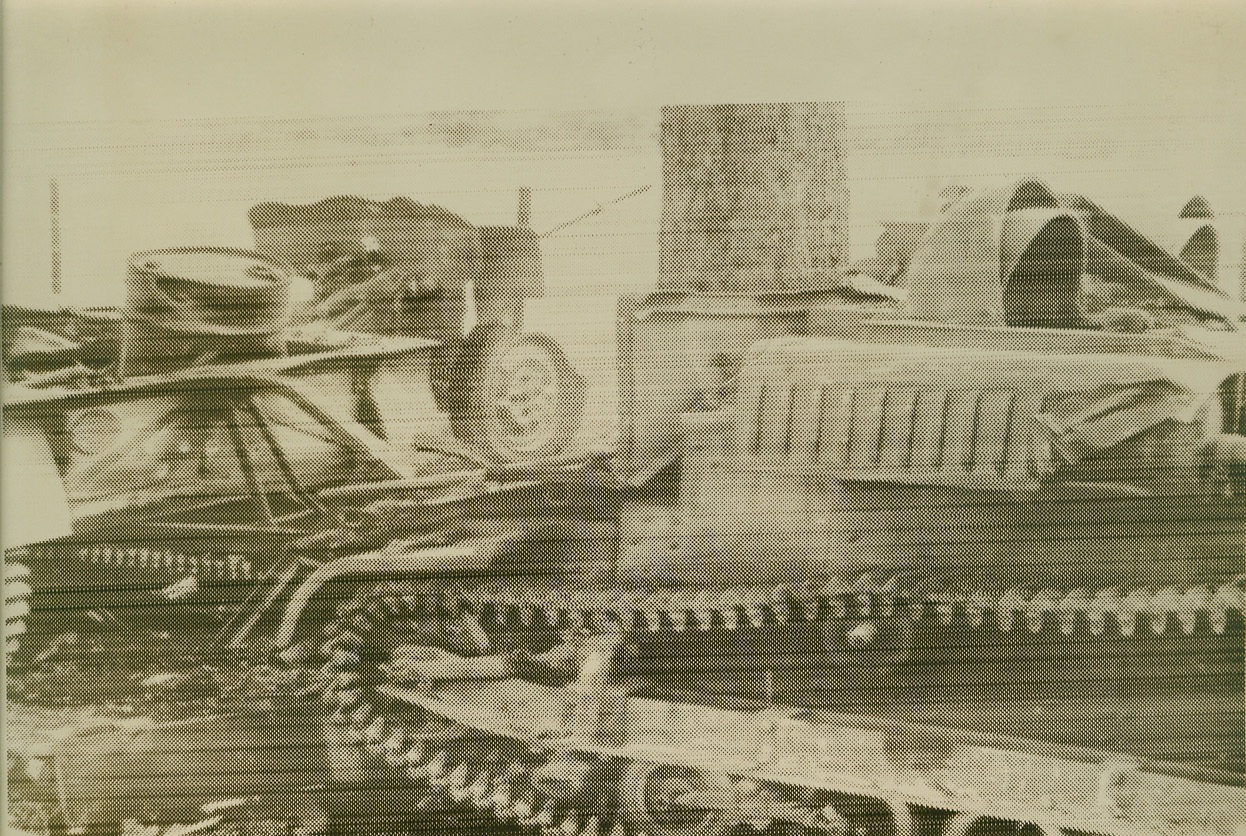 FRENCH TANKS PUT OUT OF ACTION, 5/22/1940 BERLIN – French tanks at an undisclosed spot put out of action by German gunfire, according to German caption supplied with this photo. Sent from Berlin by Radio, May 22nd. Credit: OWI Radiophoto from ACME; 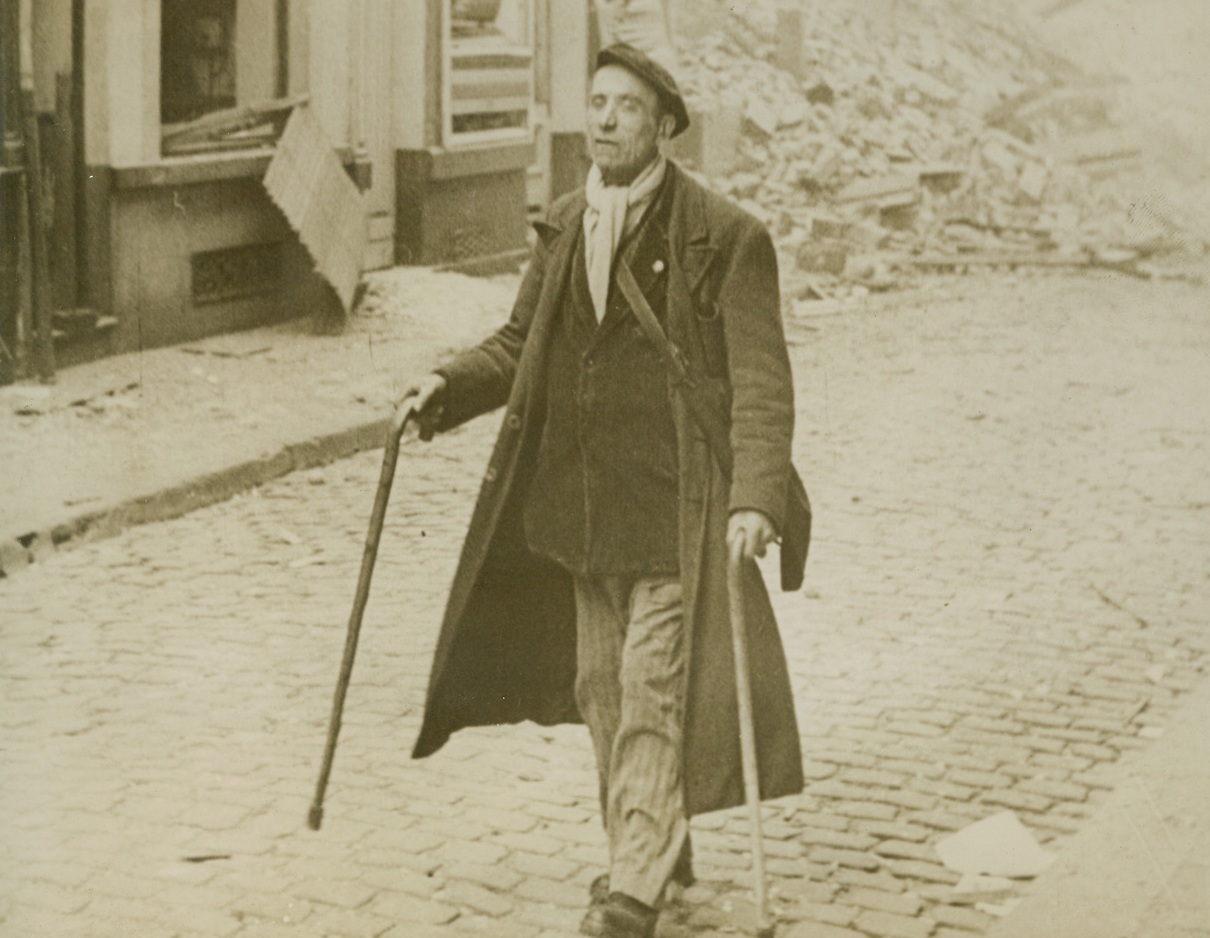 FLIGHT FROM NAMUR, 5/23/1940 NAMUR, BELGIUM—A blind man taps his way along through the wreckage of Namur during the general exodus from this Belgian town before the invading German legions swept in. His blindness shields him from the scenes of horror of this war, but not its nerve shattering blasts. Credit: Fox Movietone News from Acme; 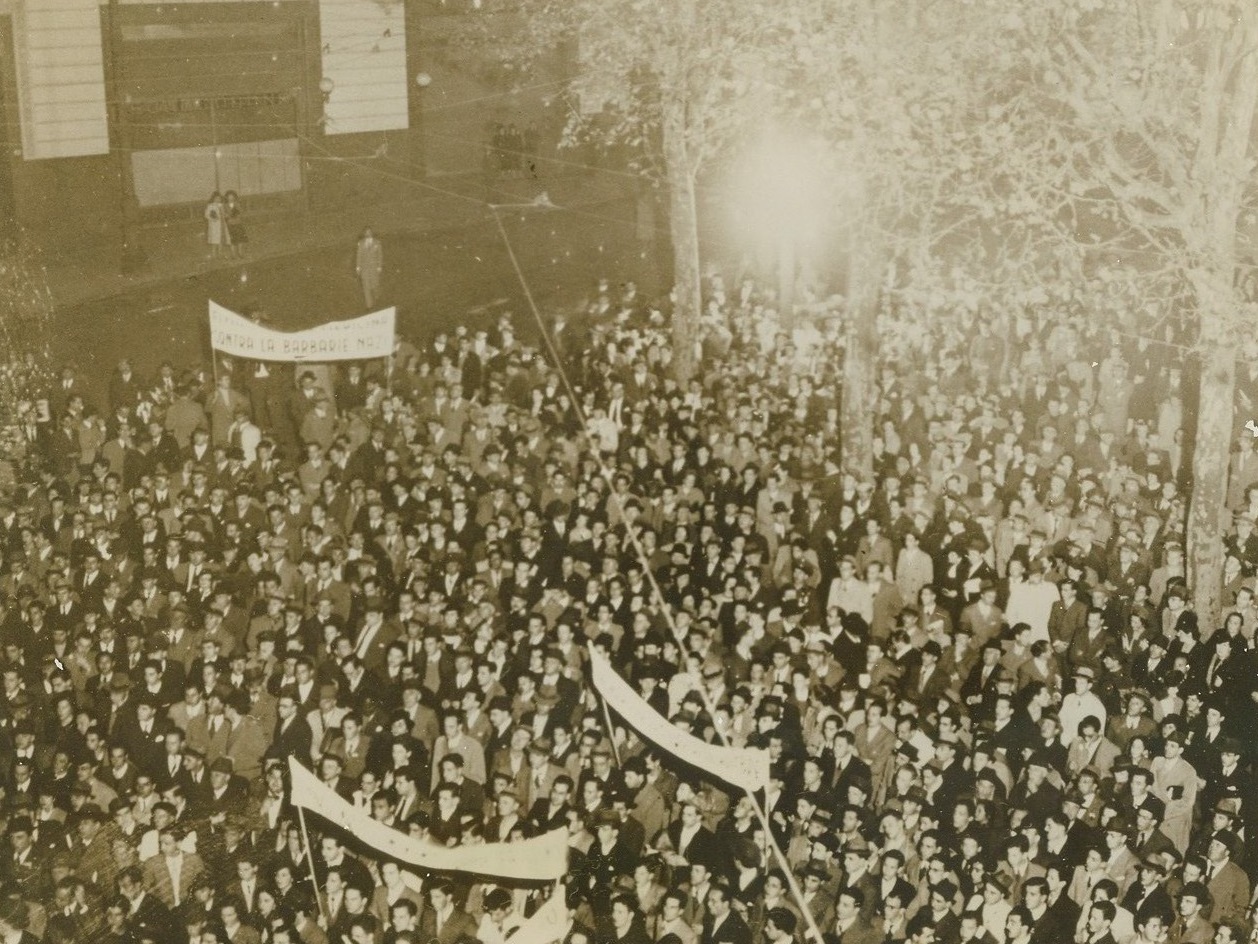 Anti-Nazi Demonstration in Montevideo, 5/25/1940 Montevideo, Uruguay – It seems that although the German Pocket-Battleship Graf Spee found temporary sanctuary in this city before it was scuttled, some Montevideans weren’t exactly delighted hosts. As witness, this general view of a recent anti-Nazi demonstration in the Uruguayan capital. Credit: ACME; 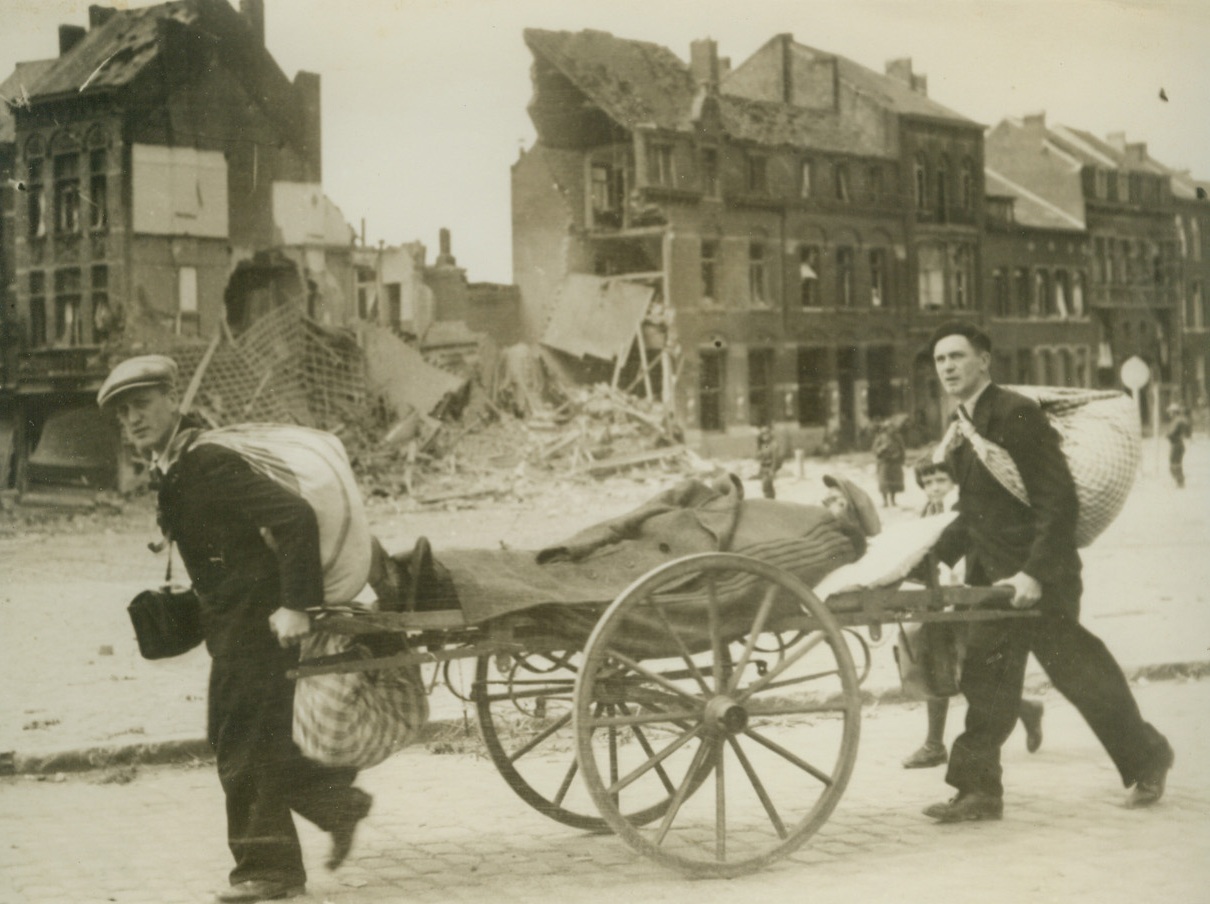 Rolling to Safety, 5/27/1940 LOUVAIN, BELGIUM – A push cart serving as a rolling stretcher for an invalid man being wheeled to safety by a pair of younger and more fortunate men. The scene is in Louvain, Belgium, where some of the extensive bomb wreckage is plainly seen.Credit: (ACME); 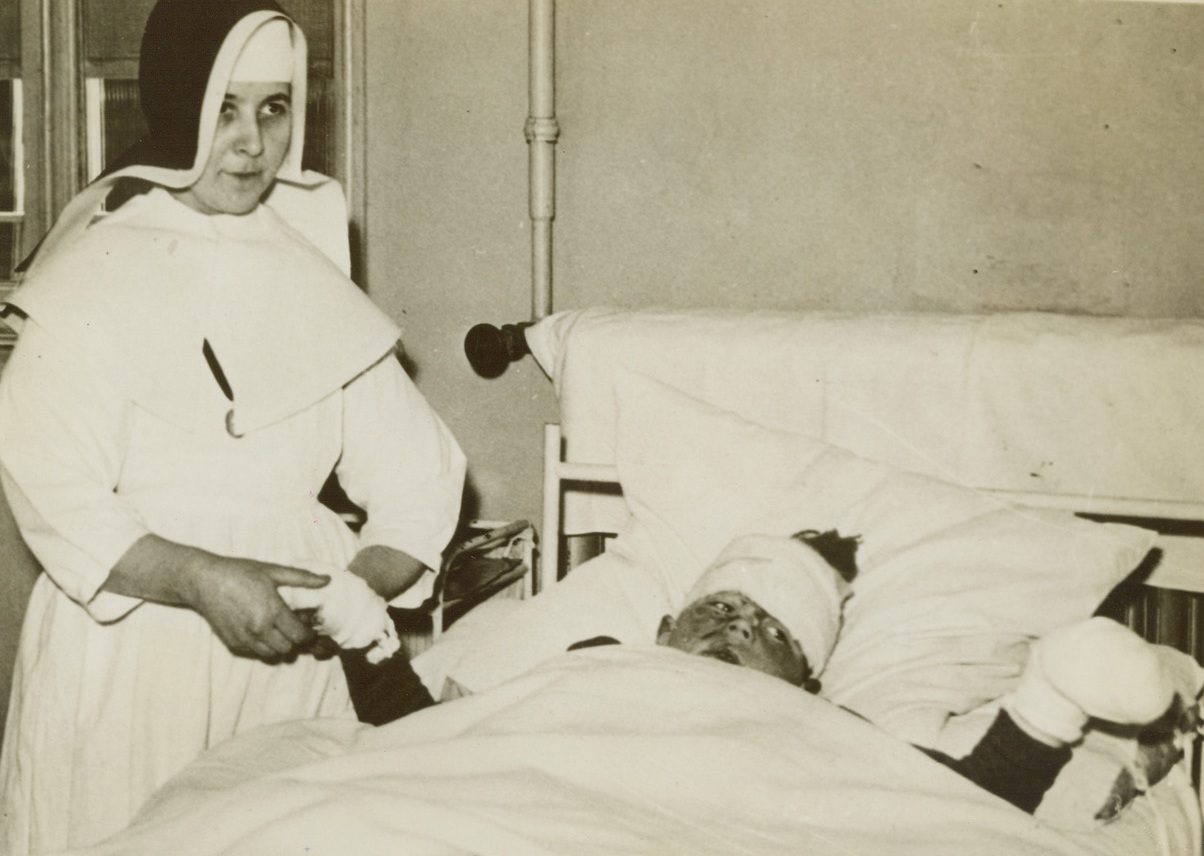 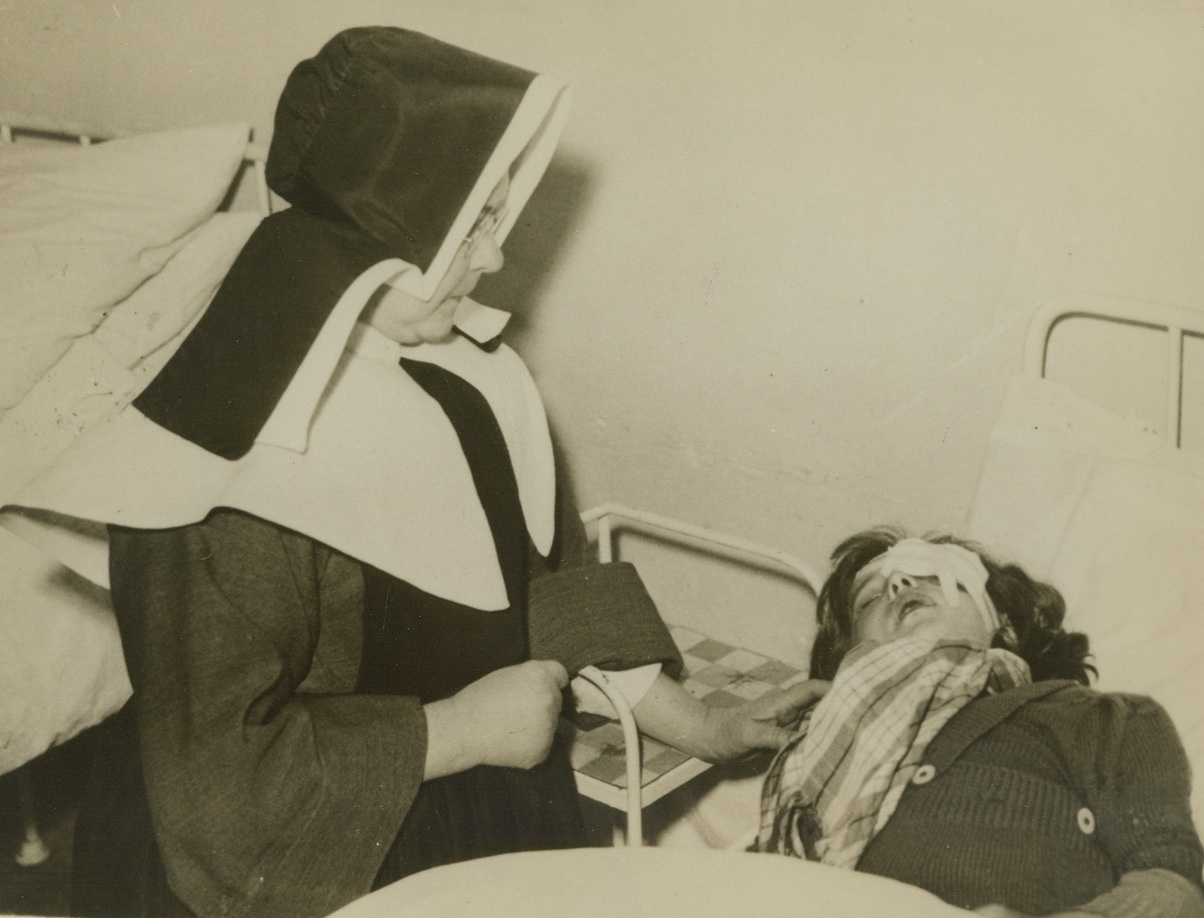 Machine-Gunned by Nazi Airmen, 5/27/1940 France - A nun in a French hospital comforting a little girl, living in agony after machine gun bullets fired from a low-flying German plane pierced her tiny body as she fled to hoped for safety. Credit: ACME; 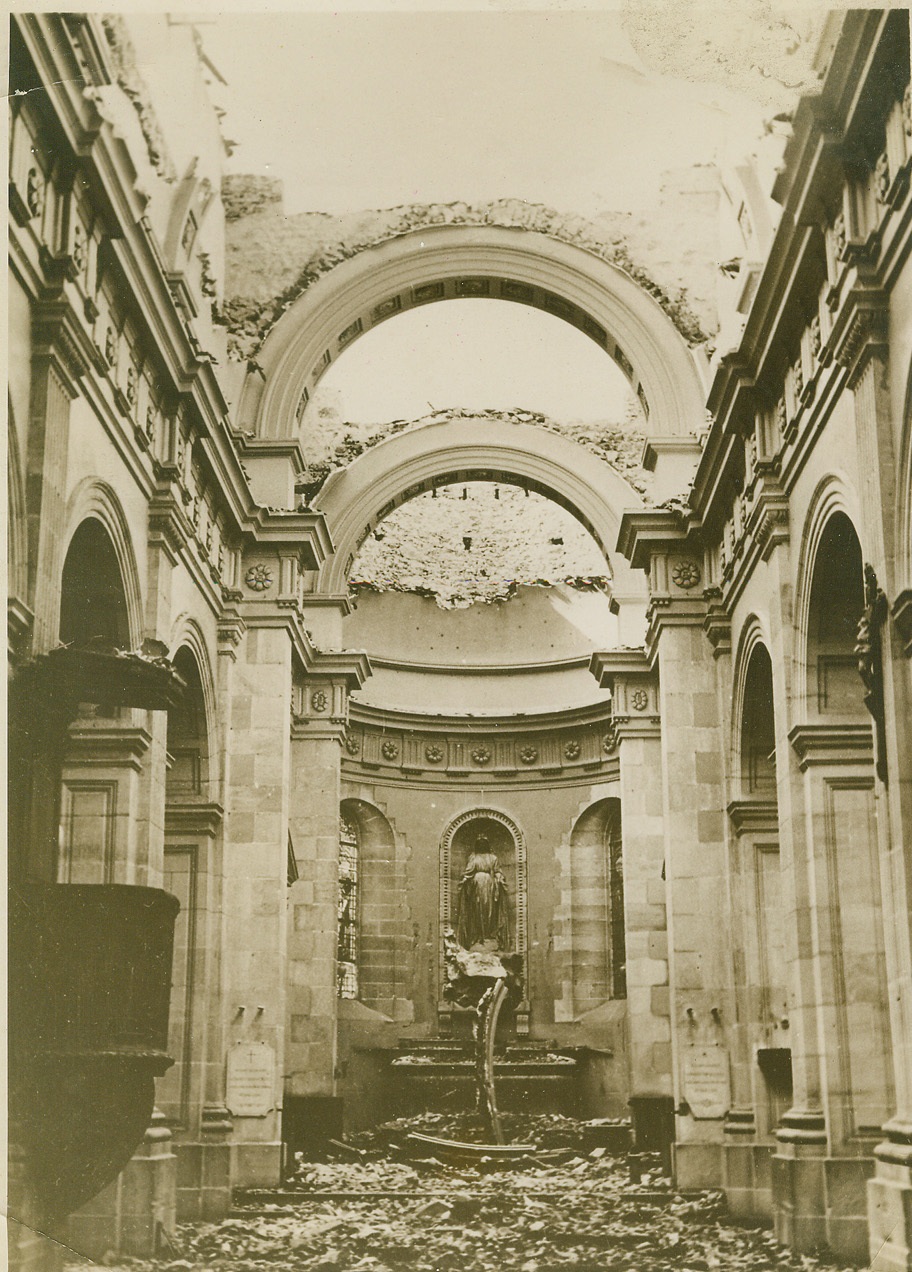 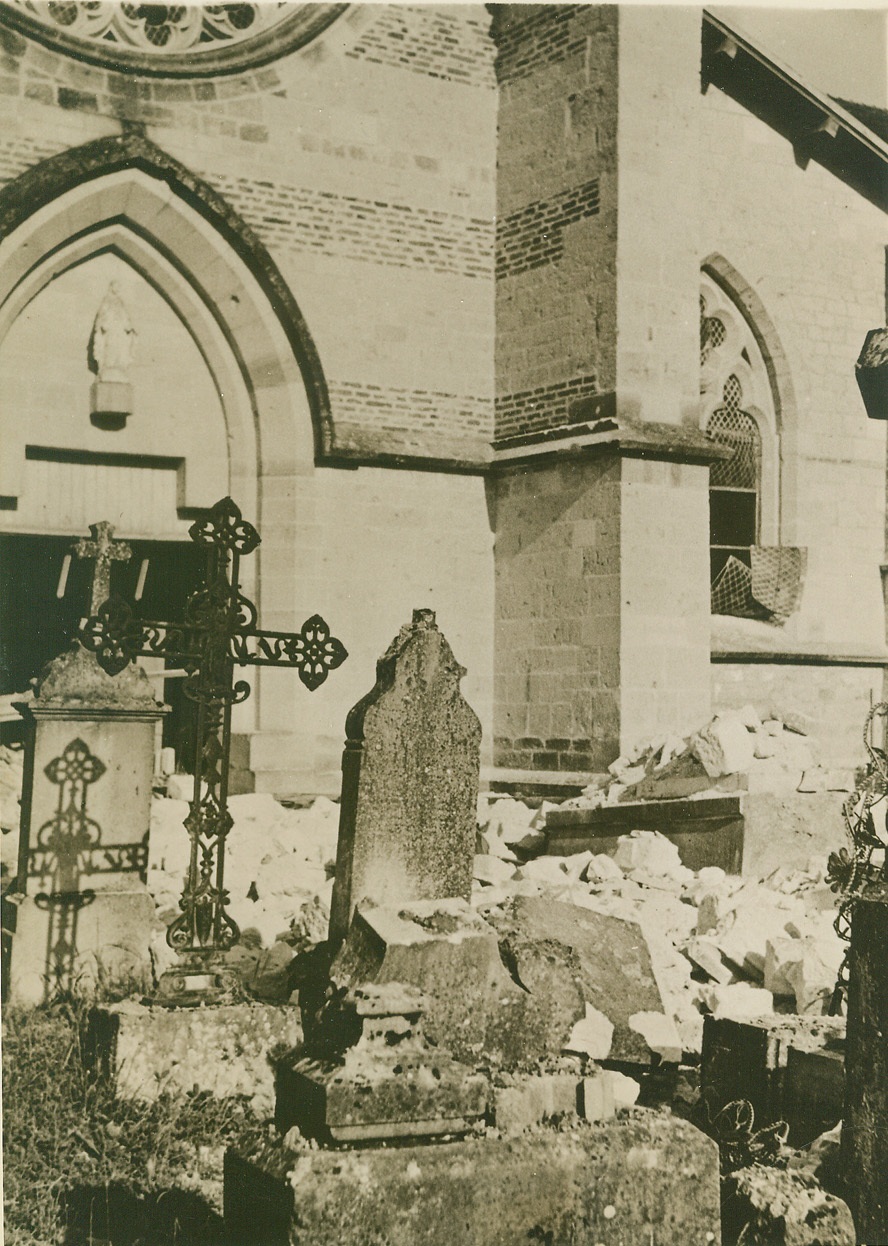 Rest In Peace, 5/29/1940 France—Resting places of living and dead alike feel the scourge of air raiders’ bombs. This church and its graveyard were battered during an air raid over a French village. Credit: ACME; 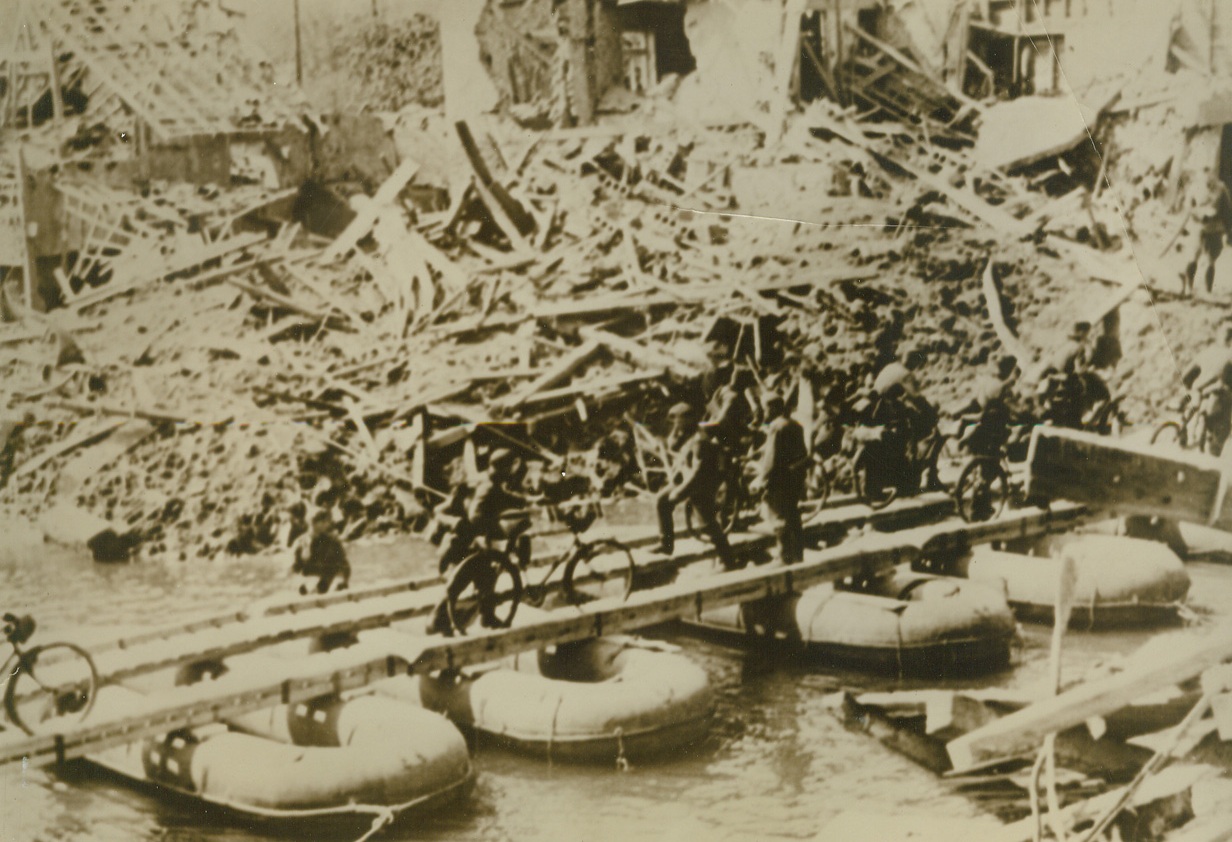 Advancing Through Belgium, 5/29/1940 BELGIUM—German bicycle units advancing over a pontoon bridge thrown across a river in Belgium at the spot where the retreating defenders blew up a bridge, according to German caption. Credit: ACME.;

They Rest on Guns That Dealt Death to Foes, 5/29/1940 Weary, battle-worn gunners sleep as Belgian artillery retreats toward the coast, shortly before surrender. This picture was flown to New York by clipper plane, passed by British censors.Credit NEA Telephoto; 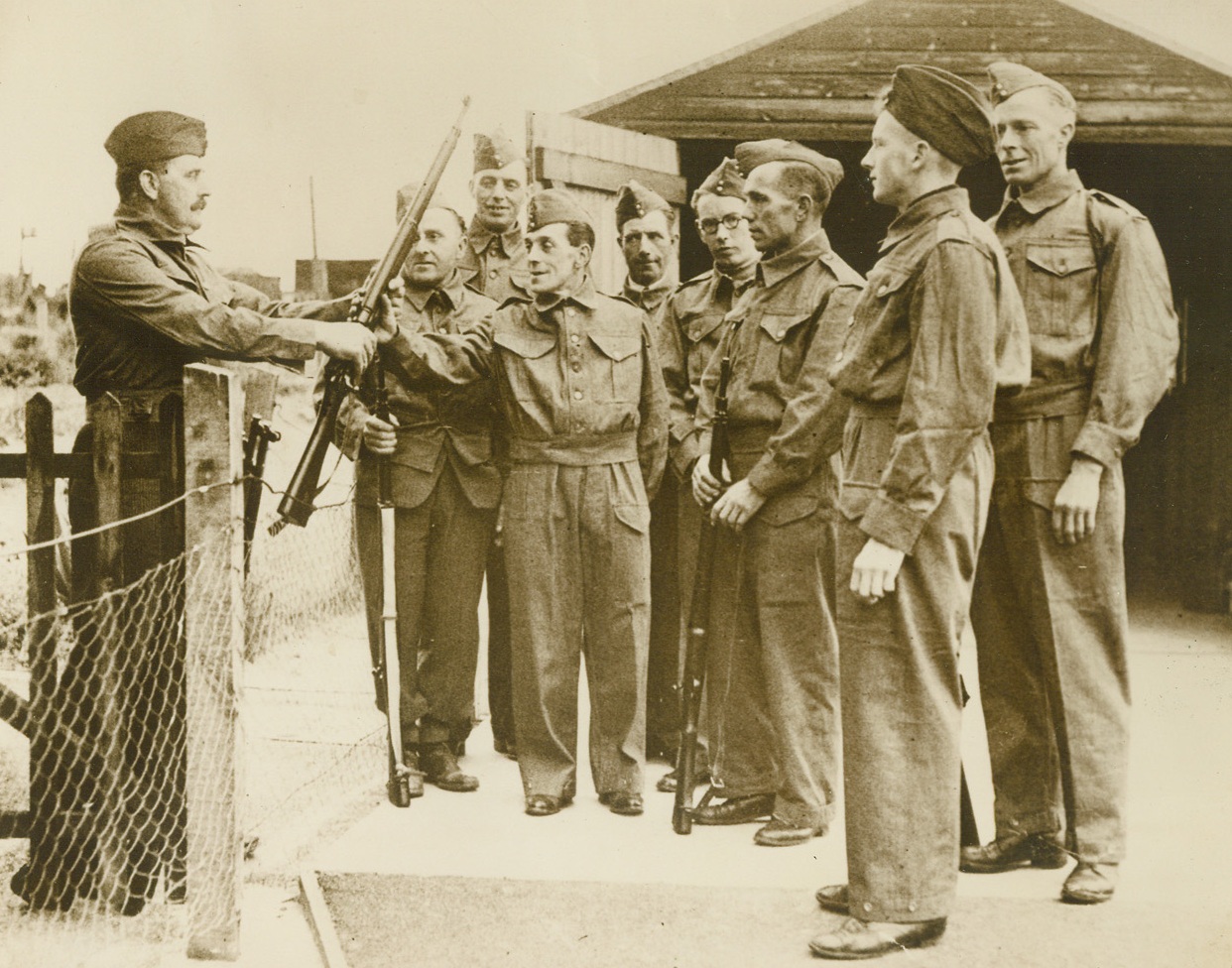 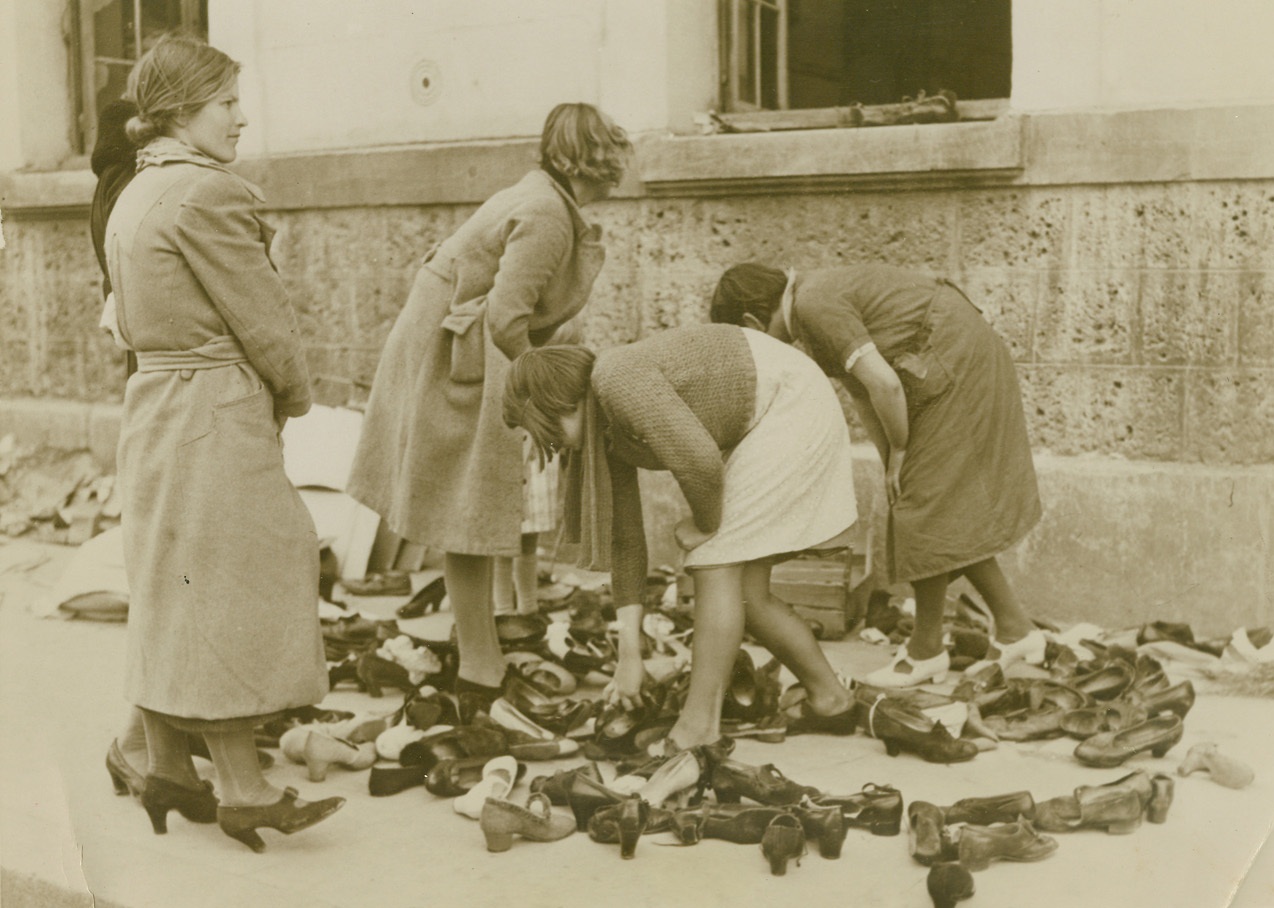 Another Army – Helpless Humanity in Flight, 5/29/1940 Paris, France – Refugees, arrived in Paris, at a clothing distribution center. Fitting is by trial and error. Credit: ACME; 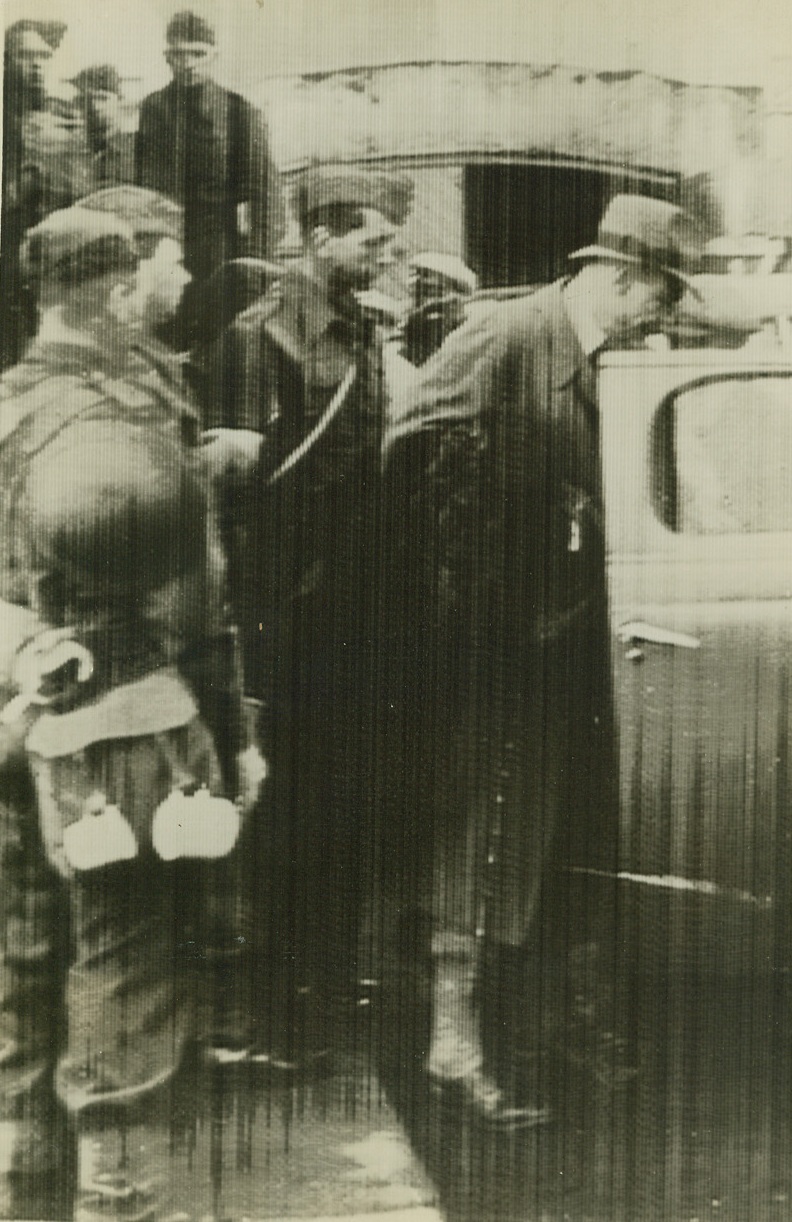 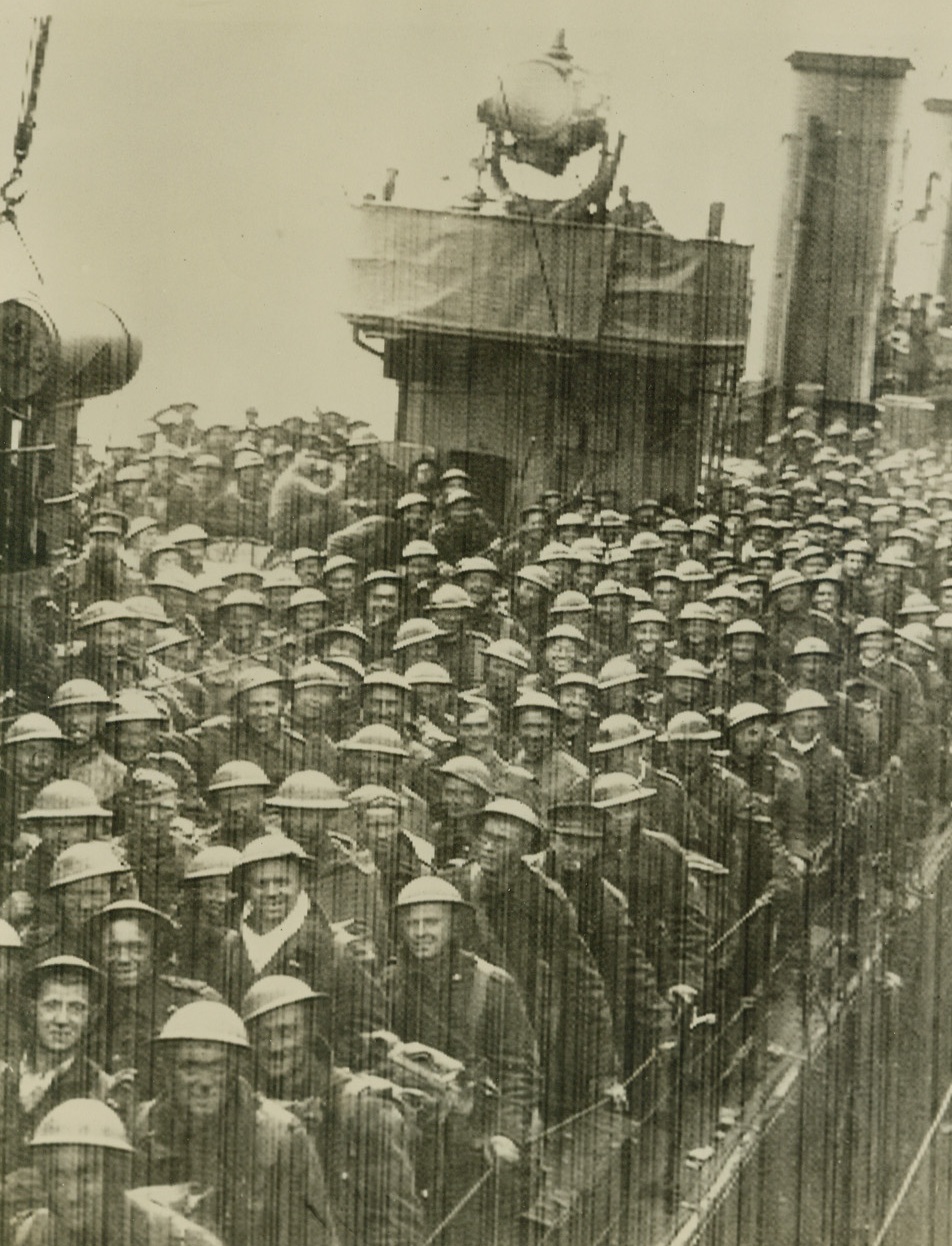 Tommies Back In England, 5/31/1940 England – Soldiers of the British Expeditionary Force arriving at a port in Southeast England on board a Destroyer, after fleeing the Flanders “Hell on Earth.” An estimated half of the B.E.F., together with French and Belgian comrades, have reportedly returned to England. Photo cabled from London to New York May 31. Credit: ACME Cablephoto; 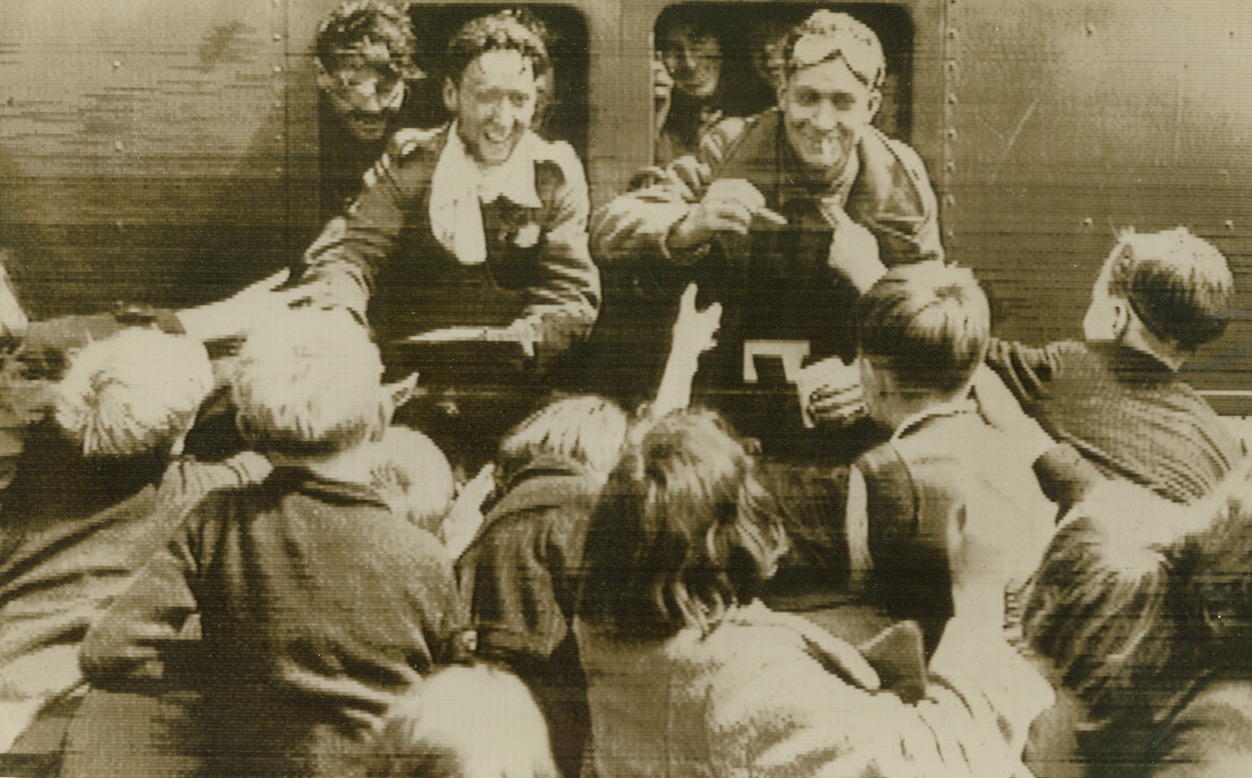 Hail to the Vanquished, 5/31/1940 London – Spectators offering food and drink to battered members of the British Expeditionary Force as they paused at a station near London after coming across the Channel. They were among the early units of the B.E.F. to battle across Flanders to the Channel and cross under relentless German attack. Photo cabled today from London. Credit: ACME Cablephoto via Western Europe;