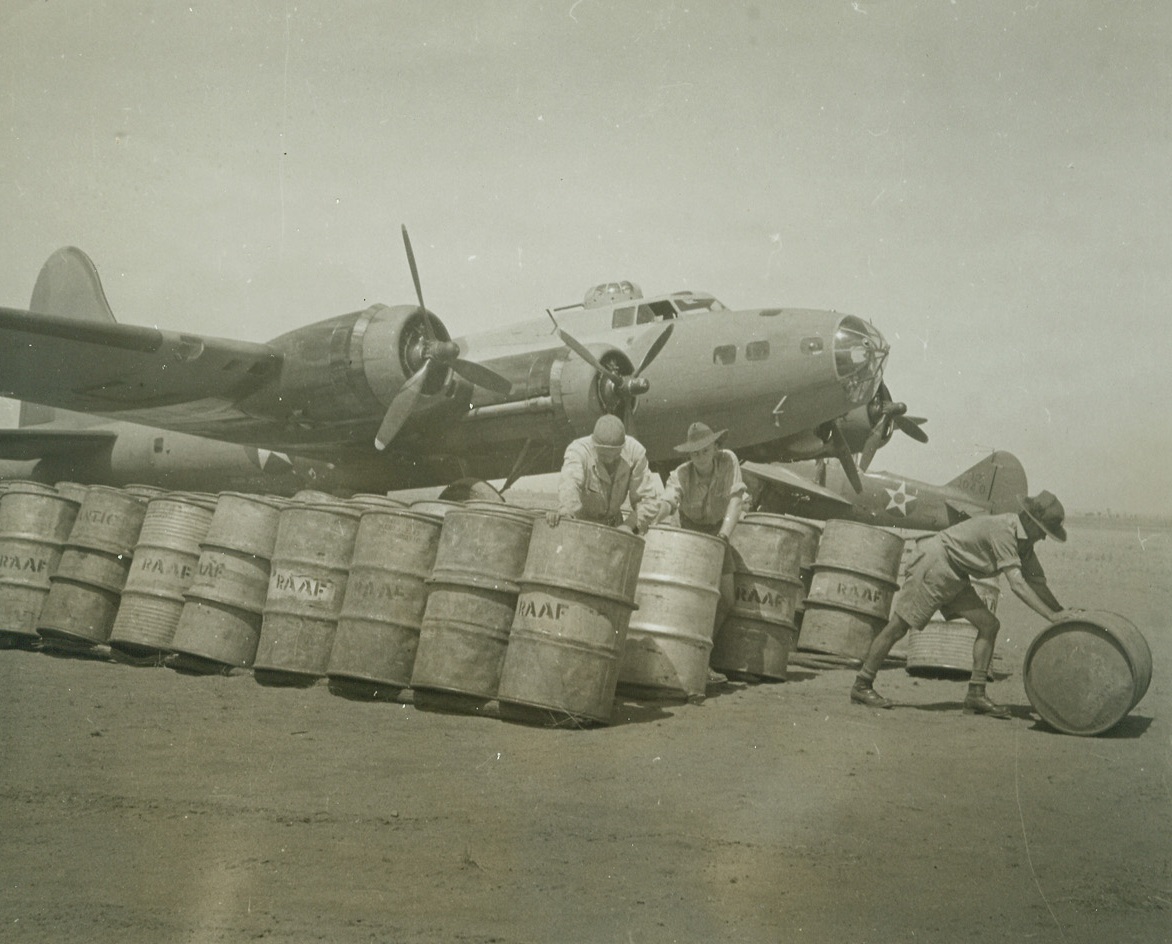 No Rationing Here, 5/12/1942. Australia – Among the first pictures to be received from the interior of Australia, this photo shows American and Australian sokders refueling a huge U.S. Army flying fortress at an undisclosed airdome.Credit Line (ACME); 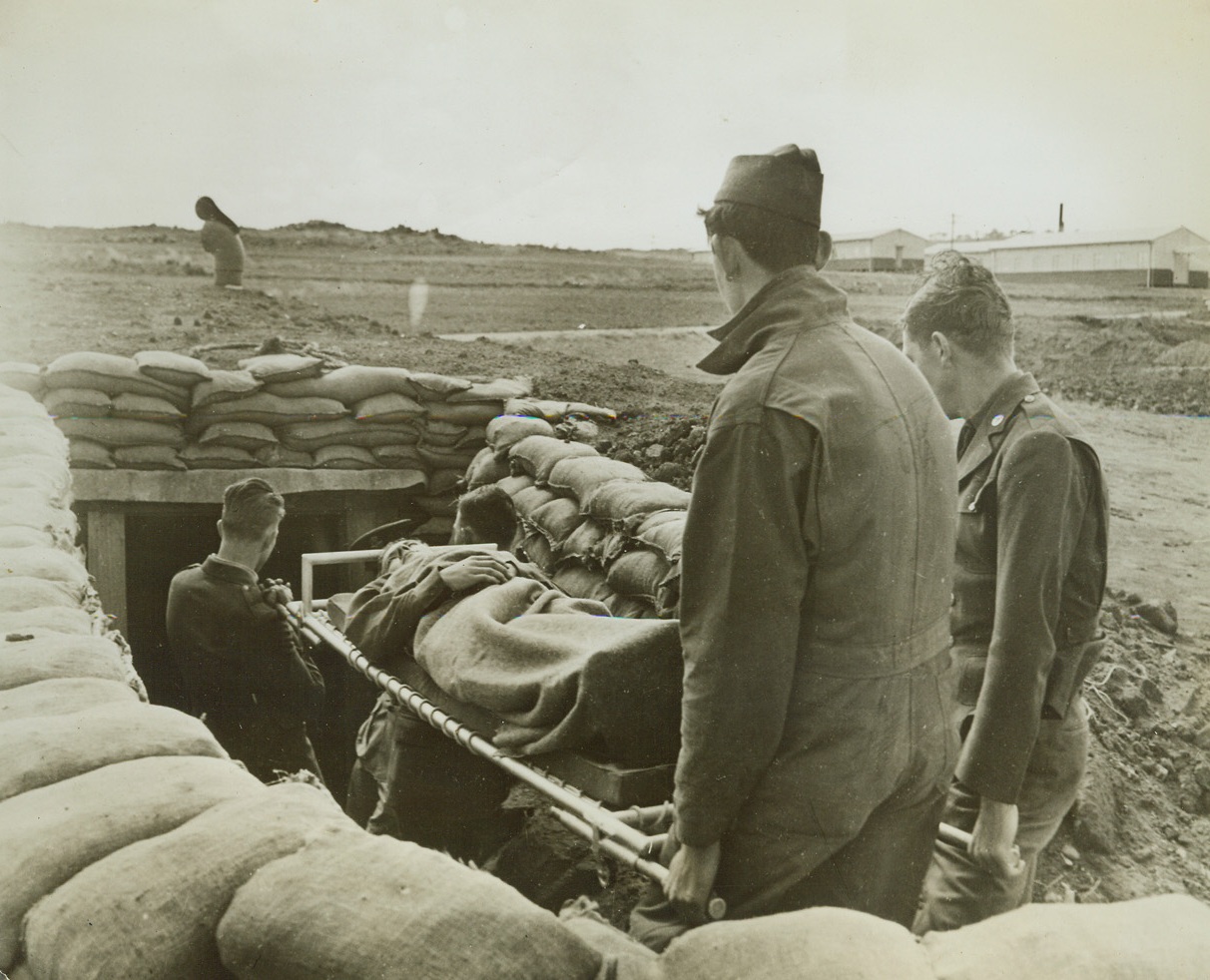 Underground Emergency Hospital on Airfield, 5/13/1942. Australia – An American pilot is carried into an underground emergency hospital by U.S. soldiers at one of the airfields Down Under. Pilot was not actually “wounded.” Credit: ACME; 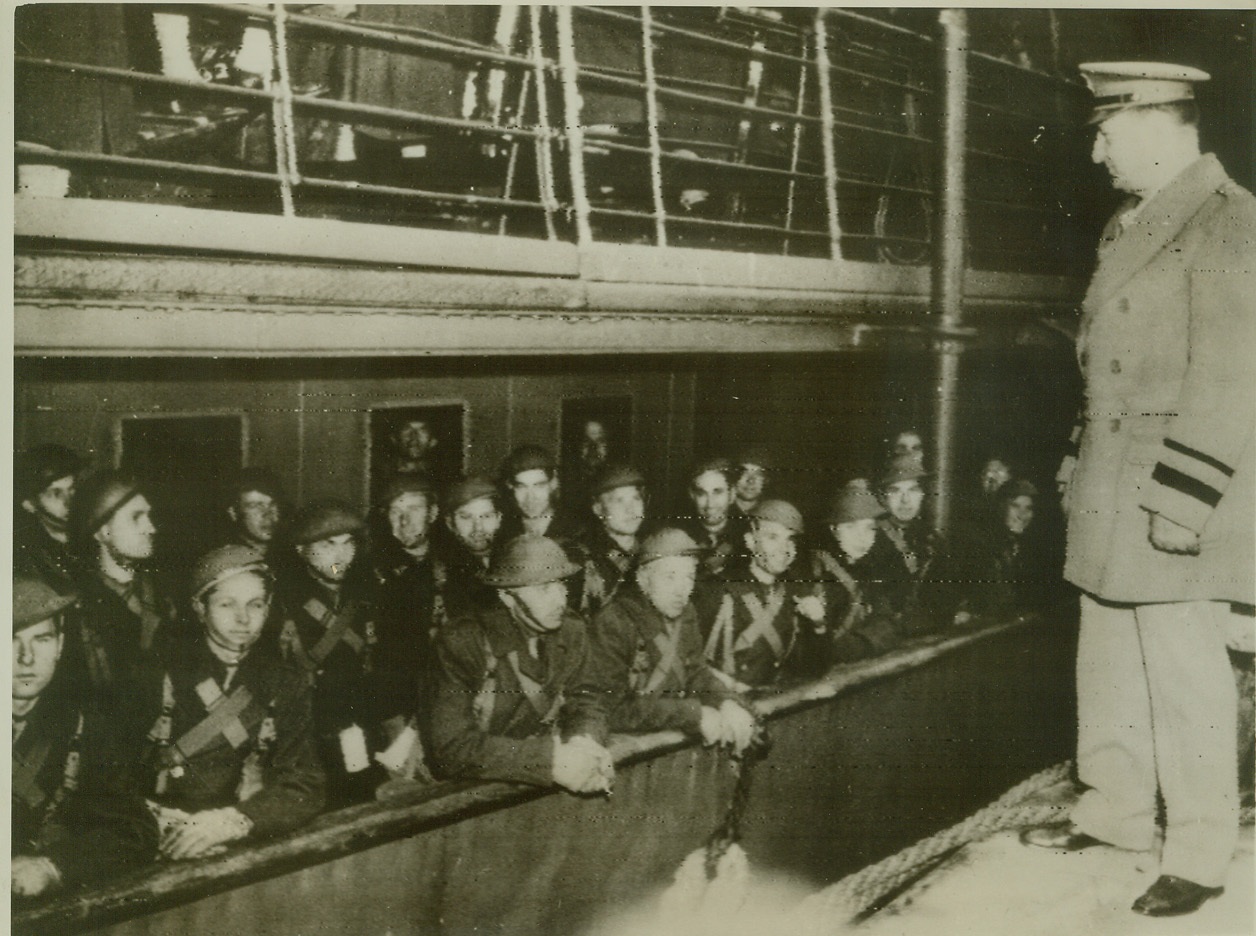 LOOK WEST, ADOLF, 5/18/1942. WITH AEF IN IRELAND – Maj. Gen. Russell P. Hartle, (right) Commander of A.E.F. in Northern Ireland, is shown greeting soldiers of a huge A.E.F. who arrived at a North Irish port in a large convoy – the largest seen anywhere during the entire war. Not a single ship was lost. Aboard the ships were tank units, guns, carriers, jeeps and trucks which took days to unload. Photo was radioed from London to New York today. Credit: OWI Radiophoto from ACME;

SYMBOLIC OF NAZIS’ NEW ORDER, 5/18/1942. RUSSIA—This picture, just received, shows buildings destroyed by the retreating Germans in Naro-Fominsk. The village was recaptured by the Red Army which has the goose-stepping Nazis on the run.Credit: Acme; 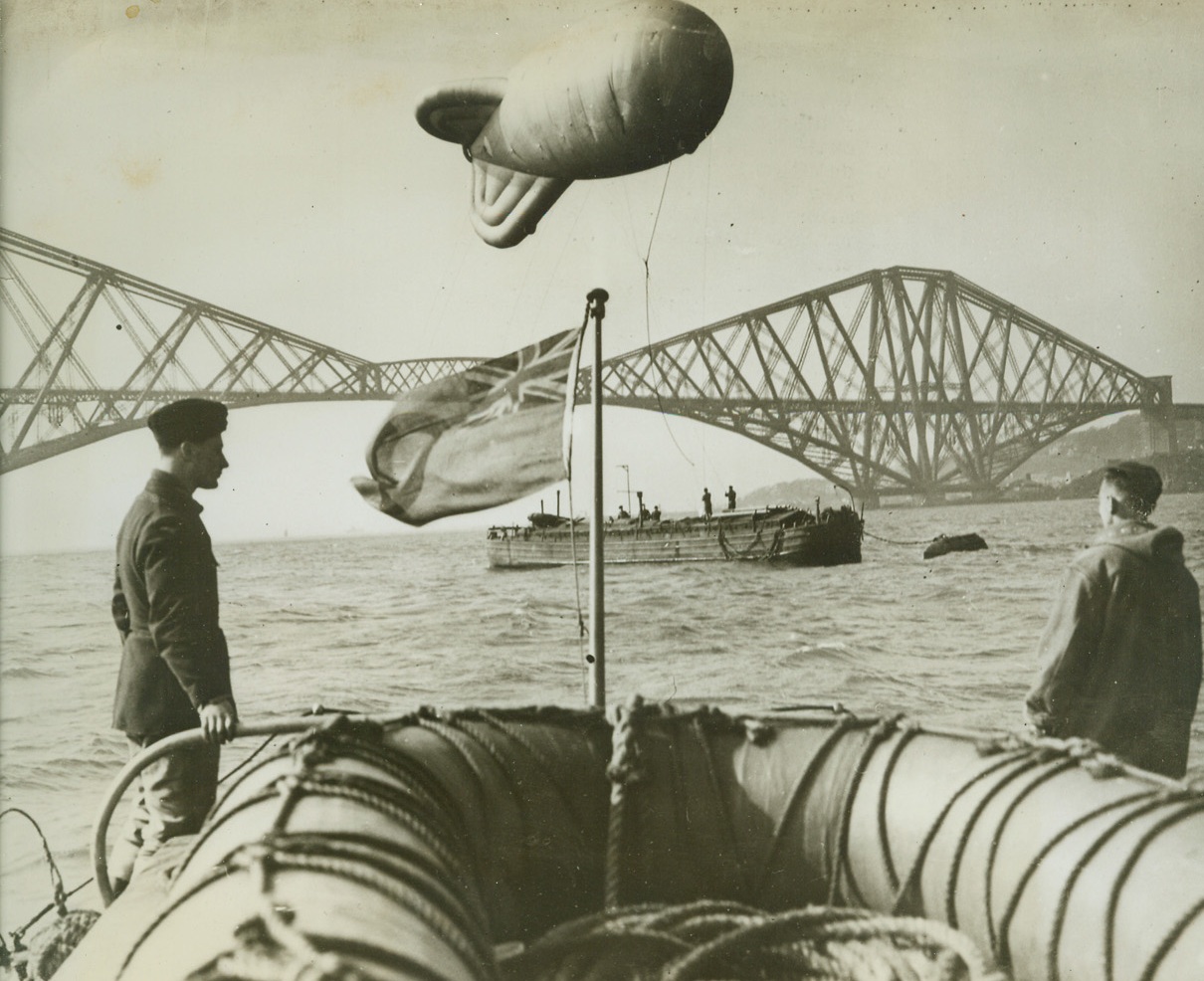 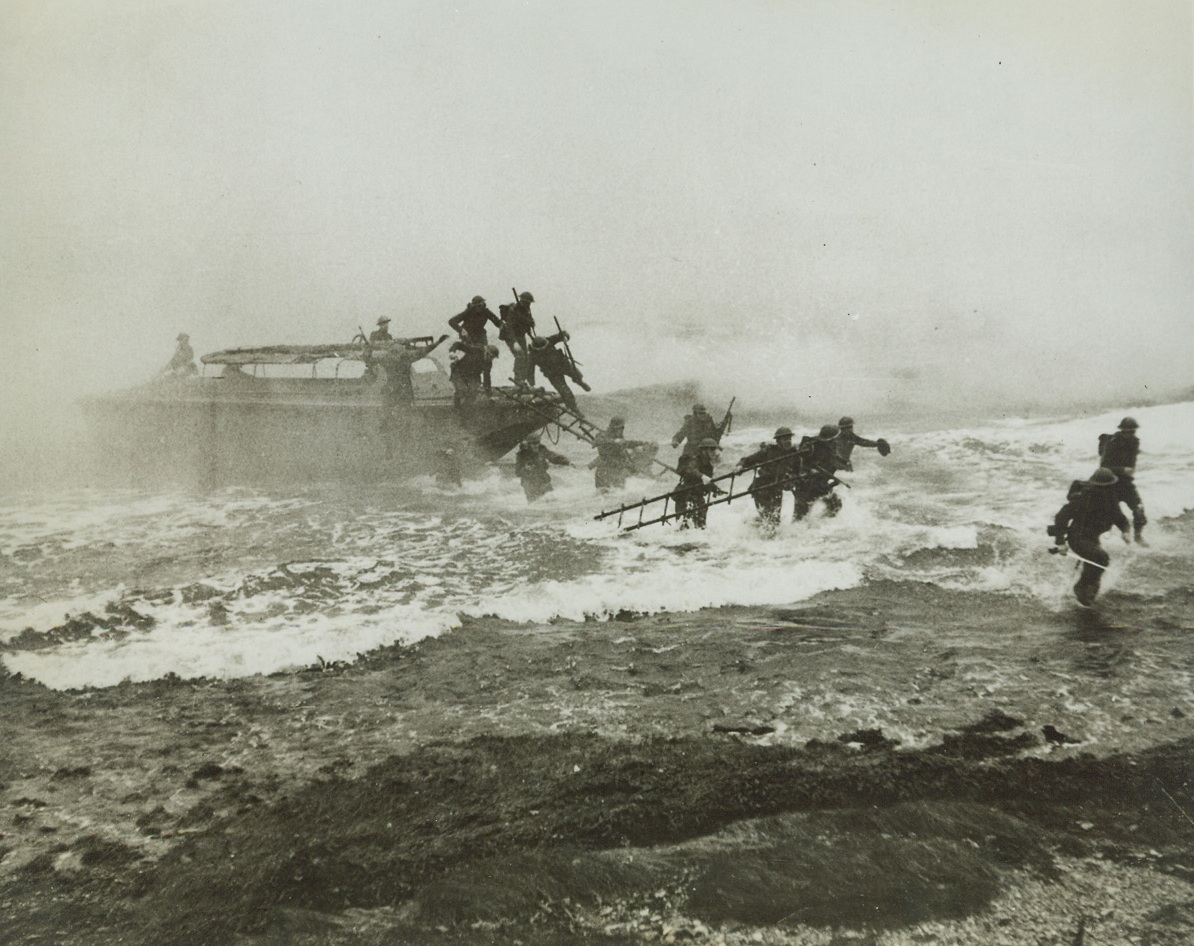 Invasion!, 5/18/1942. SCOTLAND—Carrying full equipment, arms, and ladders, troops of the Scottish Command, under cover of a smoke screen, ‘invade’ Scotland. The landing drill was witnessed by King George. Credit: ACME; 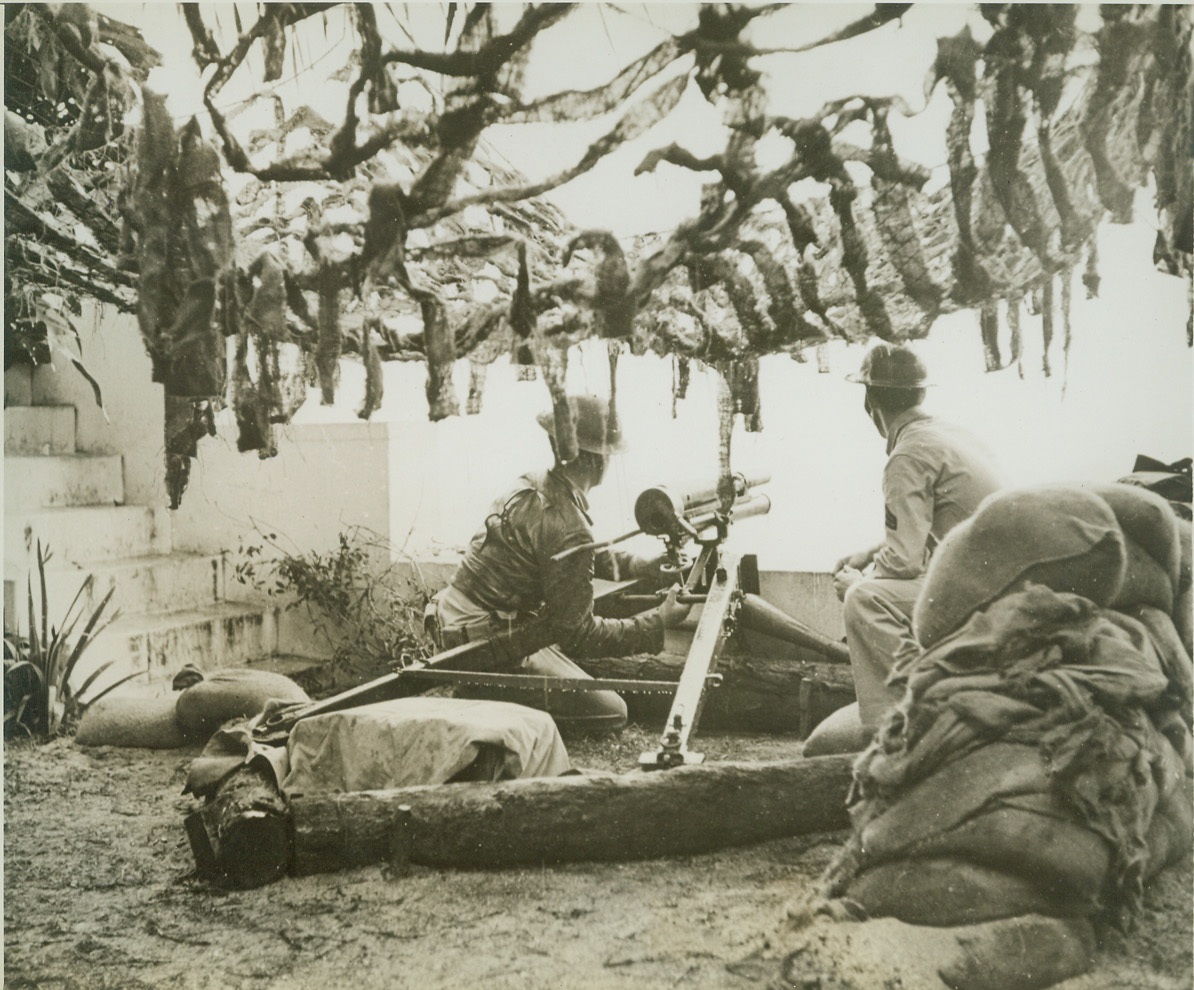 READY IF THE JAPS RETURN, 5/6/1942. HAWAII – Two soldiers man a gun installed on a private estate in Hawaii. The island defenders are ready, willing and able to meet the Japs if they return. Credit: ACME; 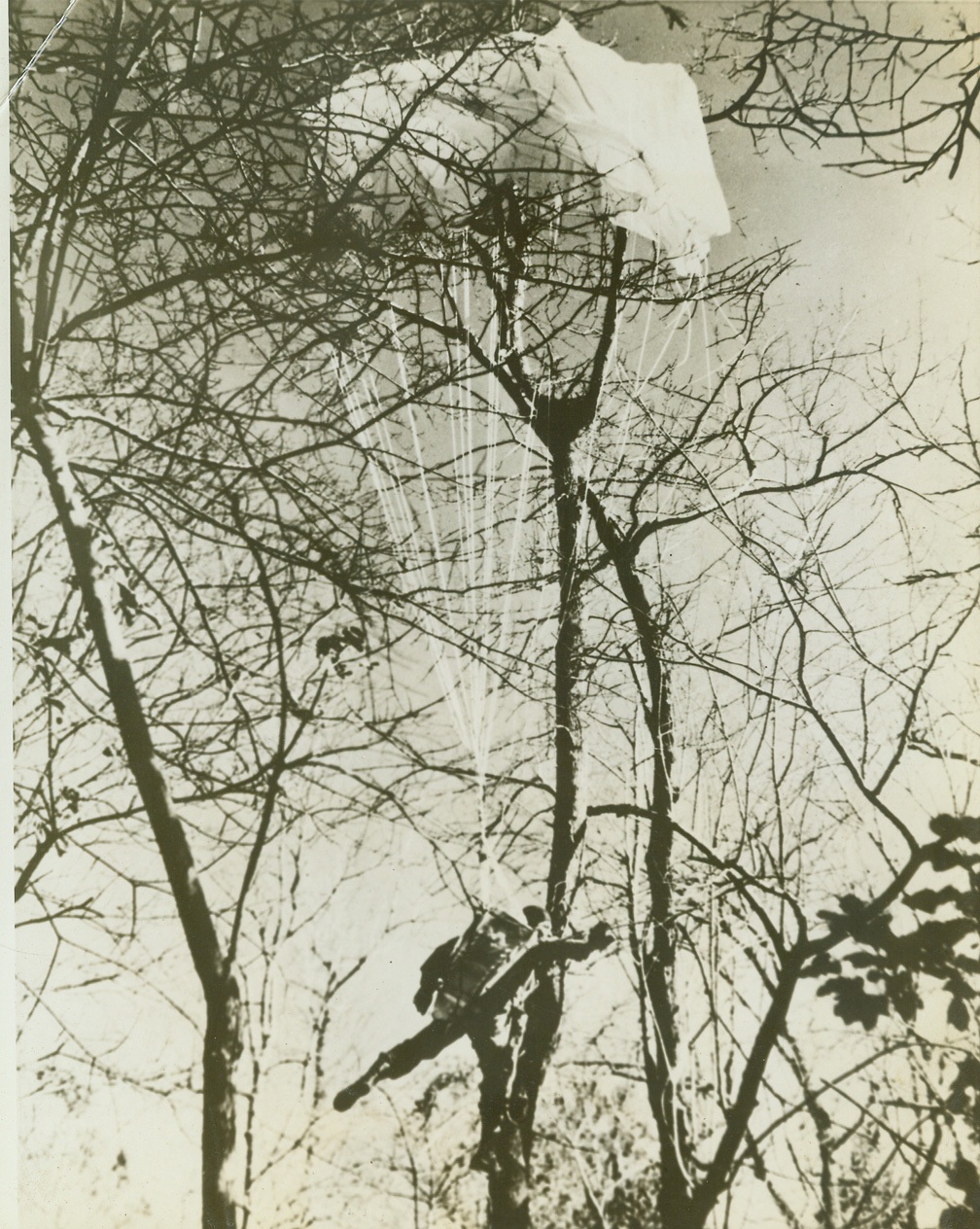 Unhappy Landing, 5/6/1942. New River, N.C.—Here’s the unhappy landing in a tree of a paramarine—Sgt. Roland F. Kachinski of Chicago—during maneuvers of the 1st Parachute Battalion of the U.S. Marine Corps at this extensive training base. Like all paramarines, the sergeant is trained to step out of a plane at an extremely low altitude; to fight with fist, knee, knife or gun. Credit: U.S. Marine Corps photo, ACME.; 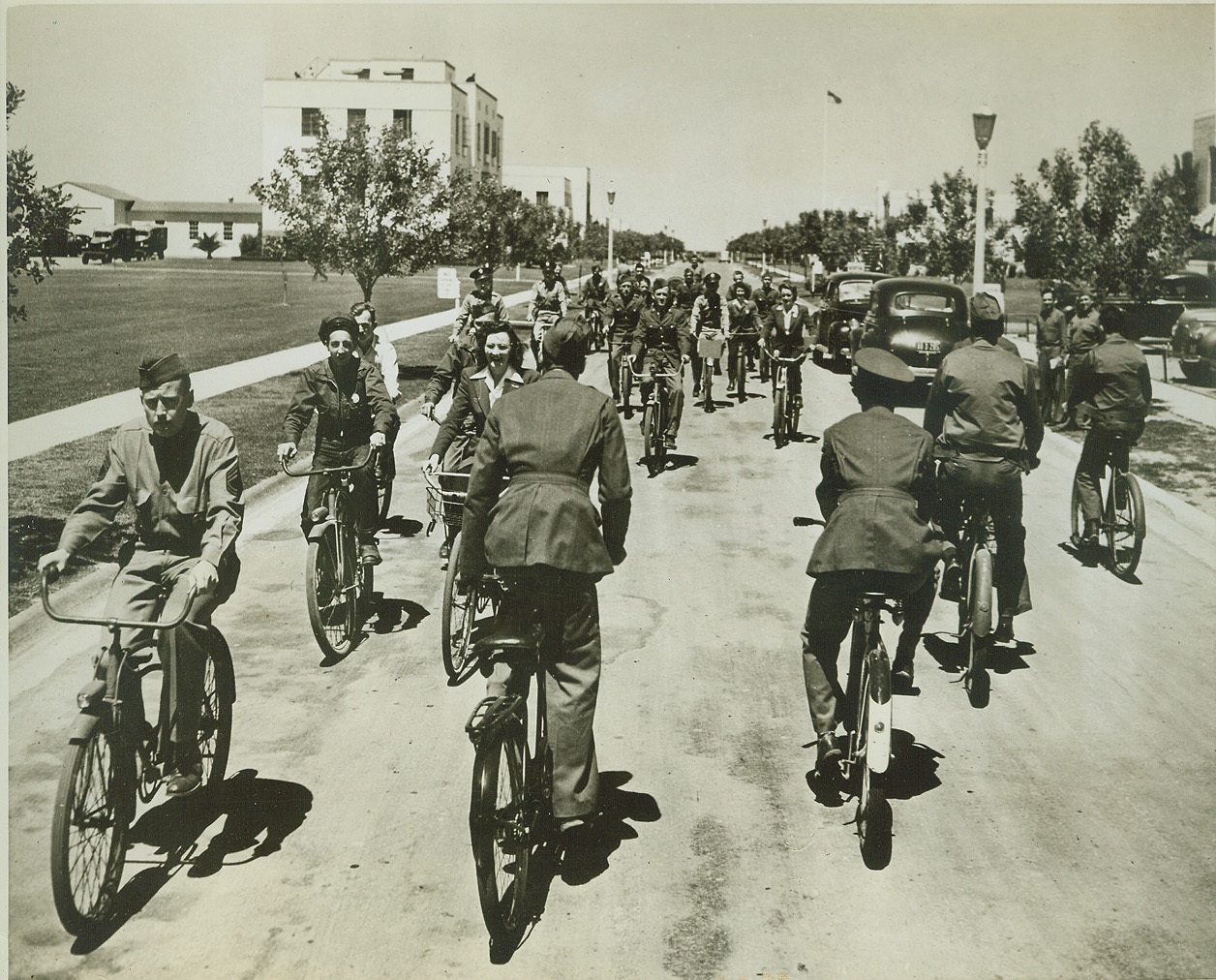 Uncle Sam’s Soldiers Conserve Gasoline, 5/7/1942. MC CLELLAN FIELD, CALIF. – America’s fighting men at the Sacramento Air Depot are “all out” in their effort to help Uncle Sam conserve rubber, gasoline and oil. Every available bicycle in this region was bought up by the military personnel and by thousands of civilian war workers immediately after Pearl Harbor. Here, Officers, enlisted men, and civilian employees ride their bikes to posts and to their work in the new “victory” fashion. Credit: (U.S. Army Signal Corps From ACME); 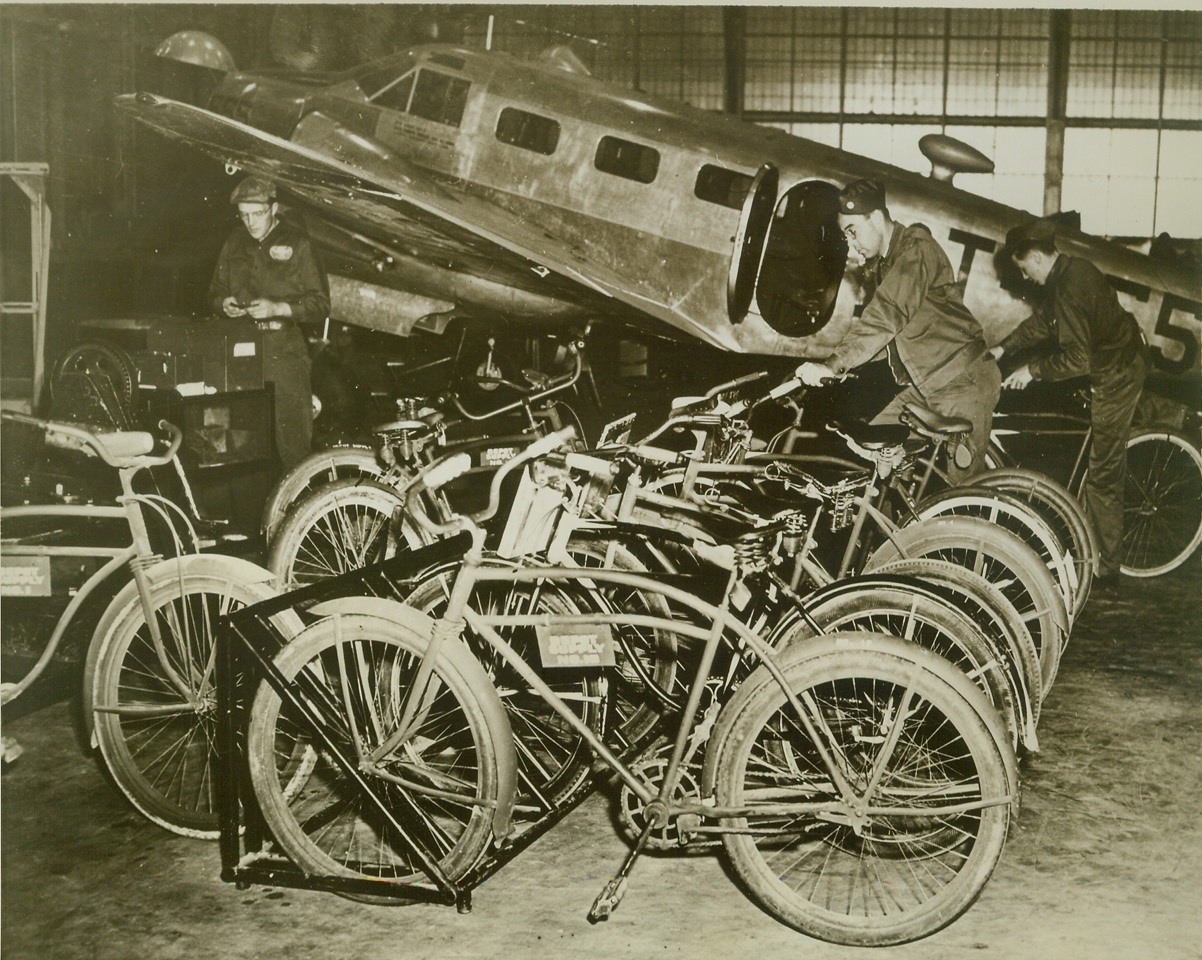 Uncle Sam’s Soldiers Conserve Gasoline, 5/7/1942. McClellan Field, Calif.—America’s fighting men at the Sacramento Air Depot are “all out” in their effort to help Uncle Sam conserve rubber, gasoline and oil. Every available bicycle in this region was bought up by the military personnel and by thousands of civilian war workers immediately after Pearl Harbor. Here, bikes are shown parked in their racks, purposely placed near planes being serviced, by the crews that own them. Credit: U.S. Army Signal Corps from ACME.; 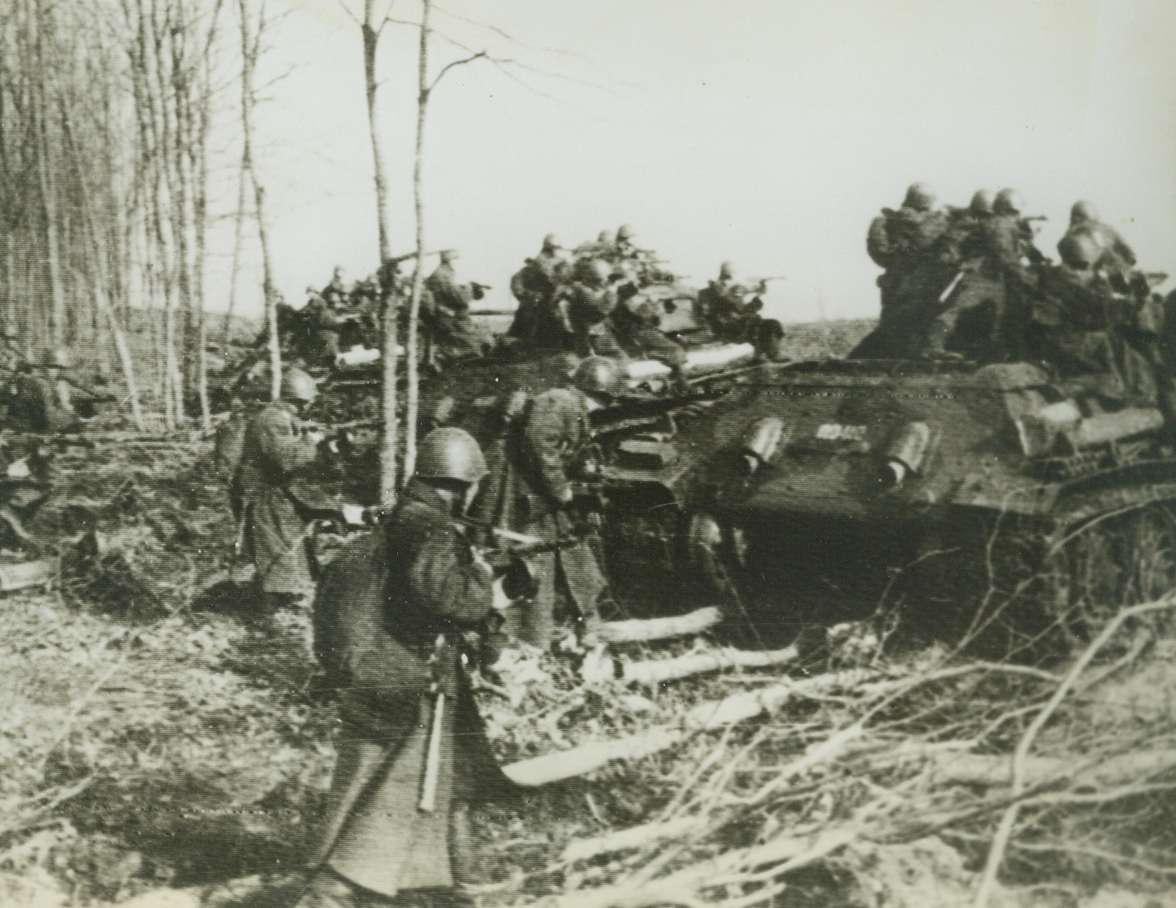 Routing Germans in Kharkov Region, 5/18/1942. RUSSIA—Tanks provide good cover for advancing Red Army troops who, when they arrive at the agreed strategic rendezvous, take up close firing positions on and behind the tanks from where they direct a withering fusillade on lingering outposts. Here, in this picture just received, Red Army units are dislodging Germans in the Kharkov area. Passed by censors.Credit: ACME; 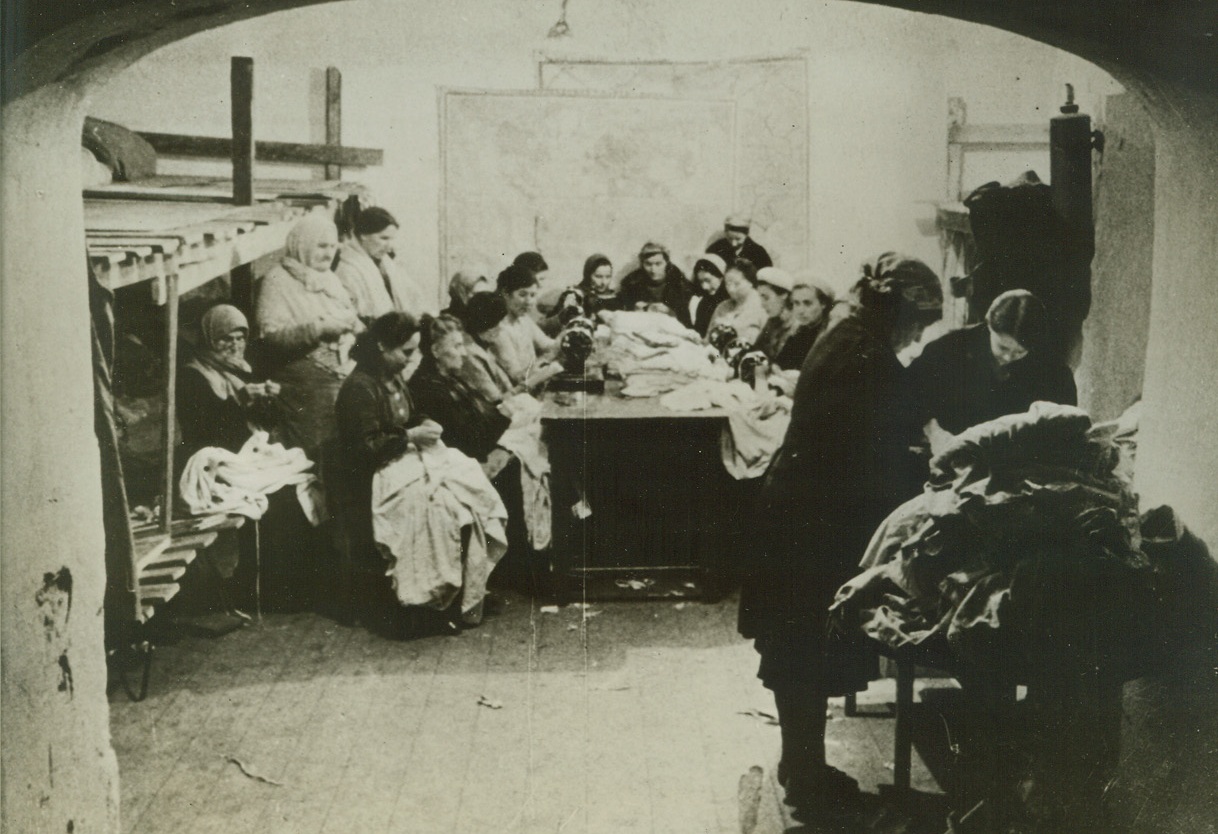 Women Behind Sevastopol’s Heroes, 5/18/1942. Sevastopol – Women are above shown sewing warm clothing for the heroic defenders of Sevastopol while resting in a bomb shelter. The heroic defense of Sevastopol and the entire Crimea will rank high in the military annals of the world, when the final story is told. The town is one of the huge stumbling blocks Hitler’s hordes must overcome before they can clean out the Crimea and move in on the Caucasas, but the defenders of the town have vowed that the Nazis will never pass. (Passed by Censors). Credit: ACME; 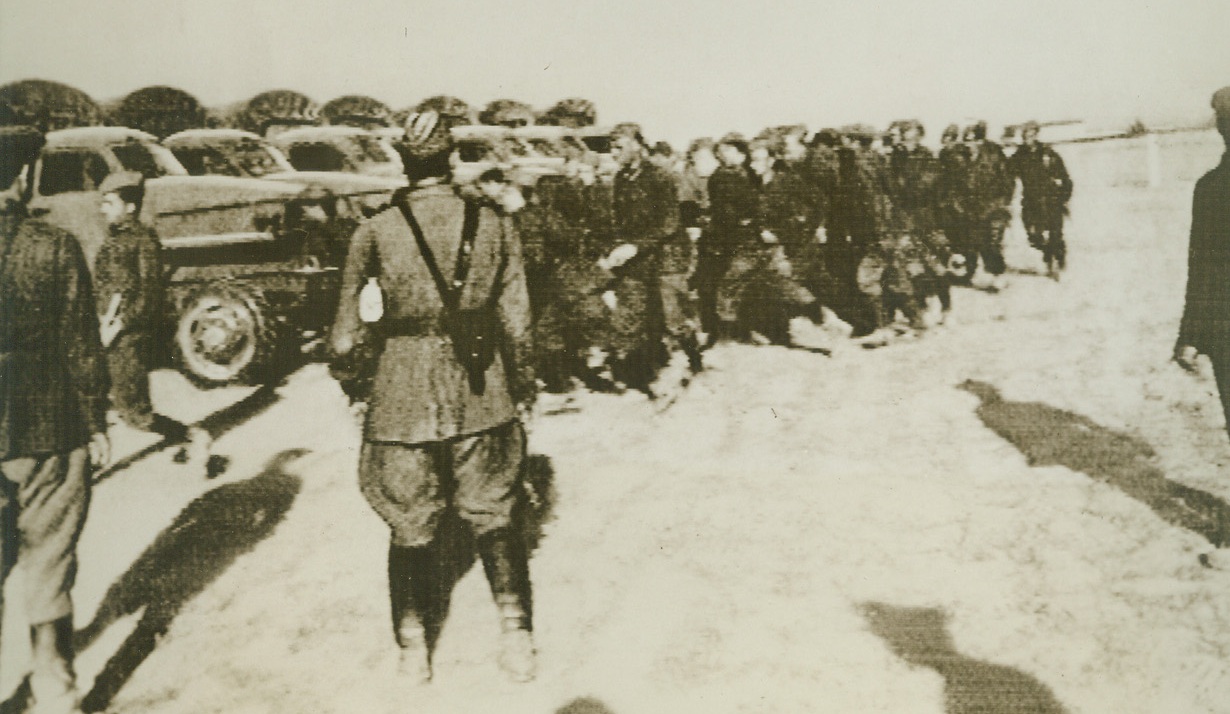 Supplies for Russia, 5/14/1942. Vastly increased war supplies from the United States and Britain are now reaching Soviet Russia via Iran as a result of better port roads and rail facilities, speedily completed with cooperation by the government. This picture, radioed from London today (May 14) shows Russian drivers taking over American lorries assembled at Andimishk for the journey thru Iran to the U.S.S.R. Credit: ACME Radiophoto; 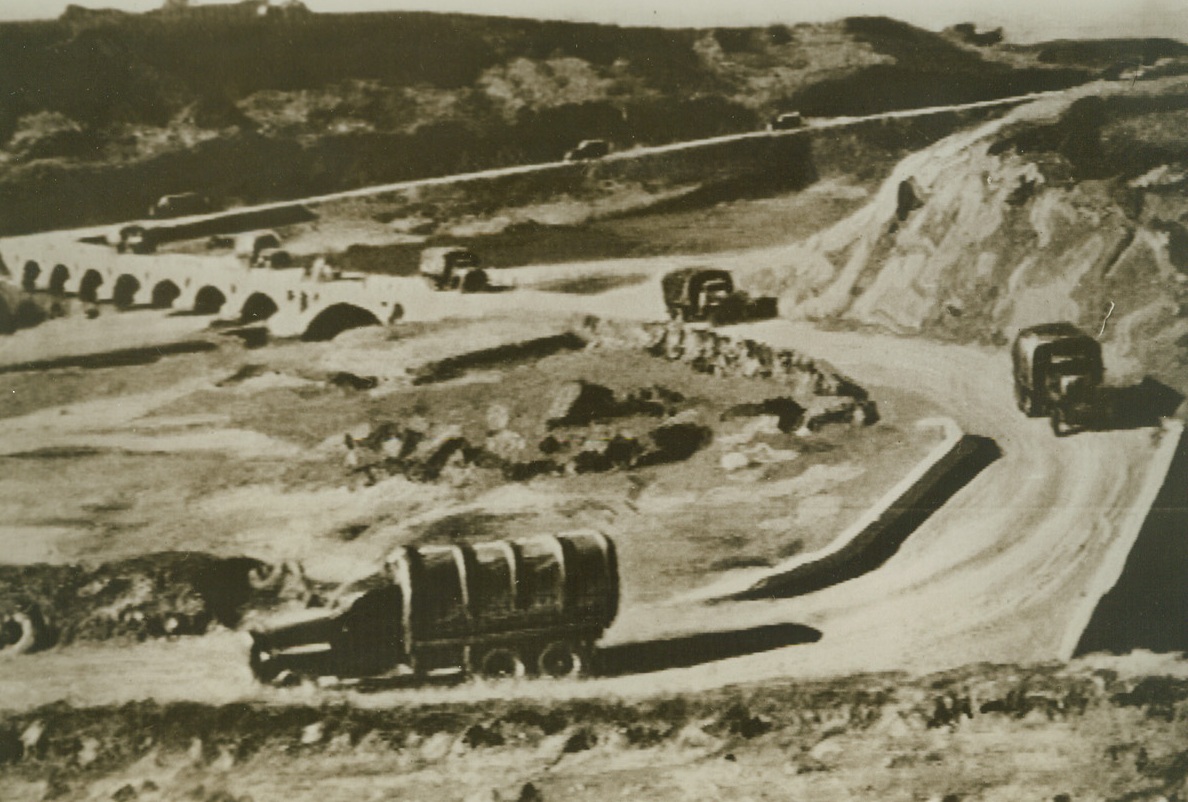 Speeding Supplies to Russian Ally, 5/14/1942. Lorries loaded with supplies from the United States and Great Britain are shown, in this photo radioed from London to New York today (May 14), in “convoy” as the trucks are rushed toward Russia. Over this new road, built with cooperation of government of Iran, the trucks travel for eight days en route to the Soviet Republics. Credit: ACME Radiophoto; 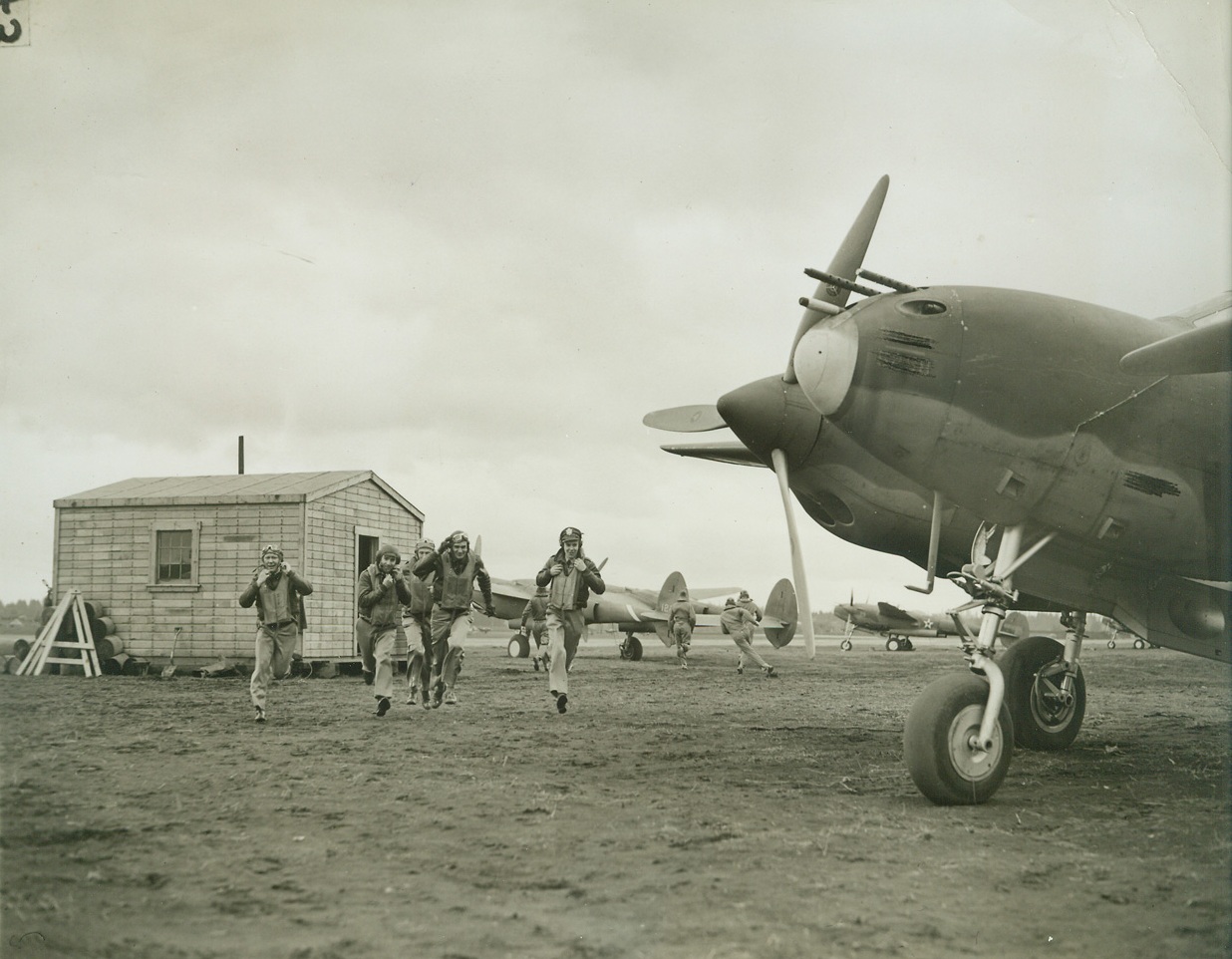 No Title. 5/8/1942. “Somewhere in the Pacific Northwest” one of Uncle Sam’s interceptor pursuit squadrons is shown going through a typical day of war time activities as they train to knock the enemy out of the sky should he make an attack on our West coast. From dawn to dusk the entire squadron is on the alert as a matter of general routing, but during the rest of the 24 hours each day, smaller units take turns standing by while the rest of the men in the squadron study, service their fleet pursuit ships, play or catch up on their sleep. New York Bureau Pilots can be seen dashing to their planes from an alert shed just after receiving the “scramble order”. The sheds are conveniently located on the field so the pilots can reach their planes in 15 seconds. Ground crews warm the motors of the ships every hour, like clockwork, so the planes are ready for an immediate take-off. Credit line (ACME); 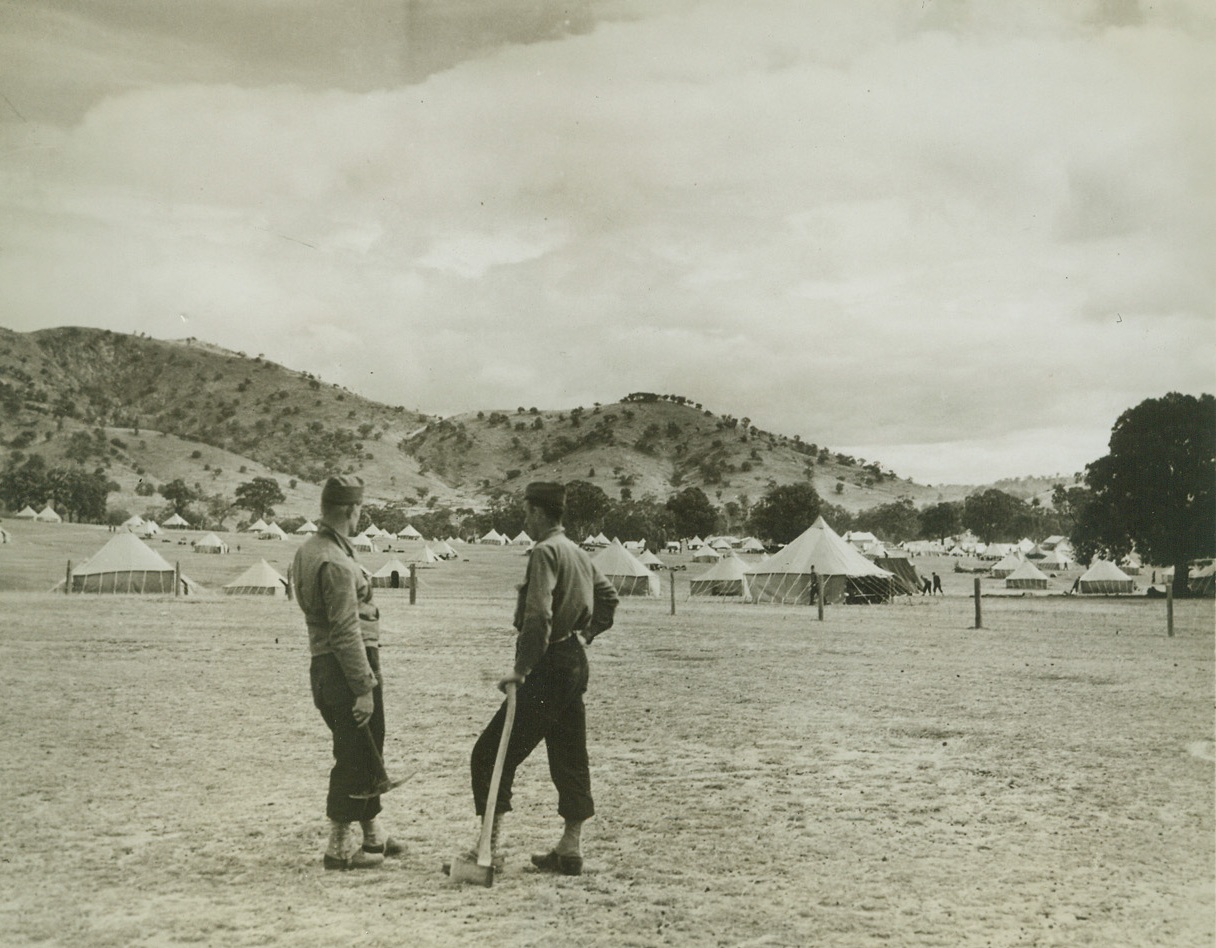 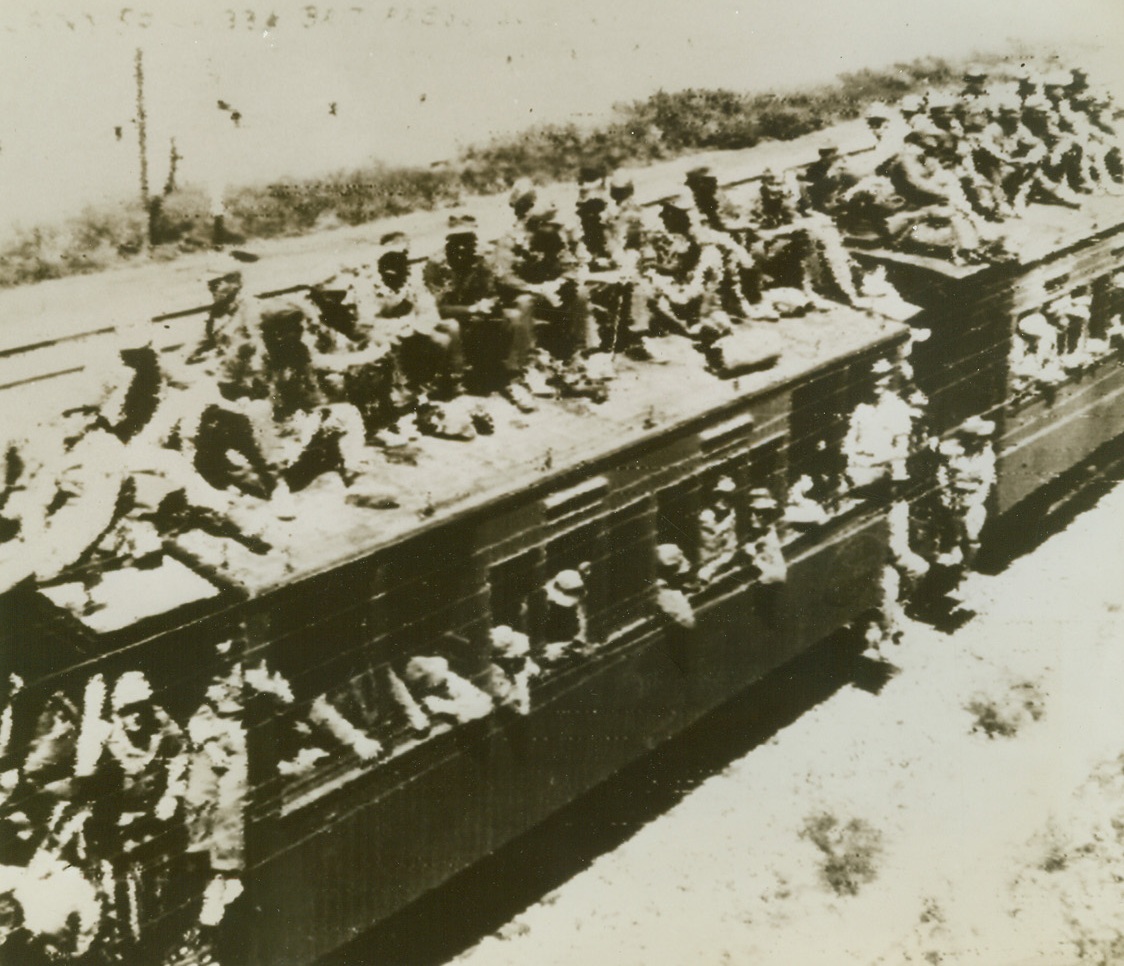 Balcony Seats Only, 5/20/1942. Tunisia – Steps, aisles, and the roof of this prisoner train are jammed with German prisoners passing through Tunis on their way to captivity. The captured Nazis who lean out of windows see nothing but marks of their country’s defeat in Tunisia where wrecked axis equipment clutters the landscape. Photo radioed from Cairo to N.Y.);

Long Trail of Defeat, 5/18/1942. RUSSIA - Just received from the Northwestern front is this picture showing a fresh batch of German war prisoners being marched off to the rear of the Soviet lines through deep snow.; 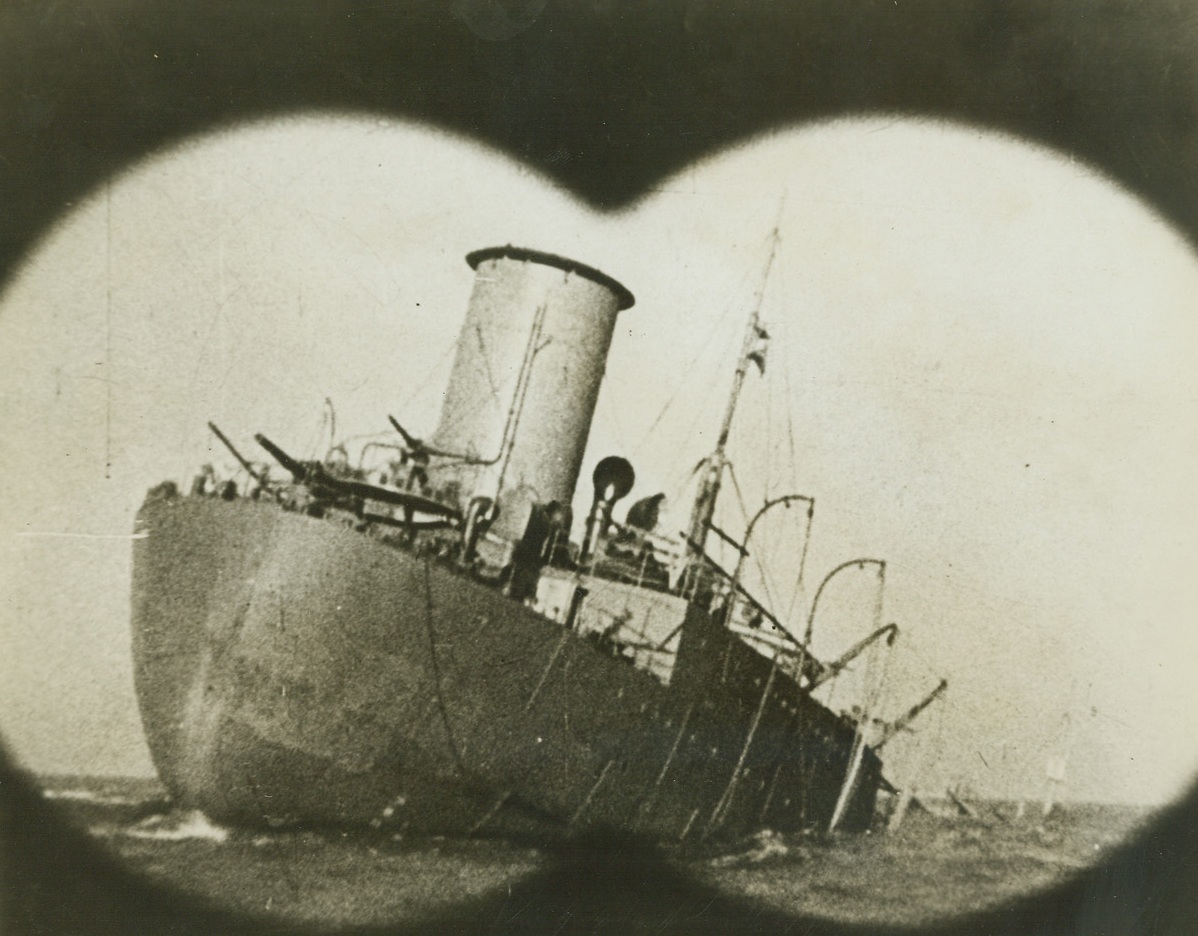 Did “Coming Events Cast Their Shadow?”, 5/14/1942. In Northeastern Canada—When the Columbia picture, “The Invaders,” was first shown in the United States, portraying the invasion of North America, through Canada, that invasion was only a possibility. But on May 12th, when Canadian Navy Minister Angus McDonald announced that two ships had been torpedoed in the St. Lawrence River, near its mouth, some of the scenes from “The Invaders” were brought vividly to mind. Is it possible, people are now asking, that other scenes from the movie may come to pass? Here, from the picture, is a freighter, as it is just about to plunge to the bottom—the victim of an Axis torpedo. It may very well be a picture of one of the two vessels sunk in the St. Lawrence. Credit: ACME.; 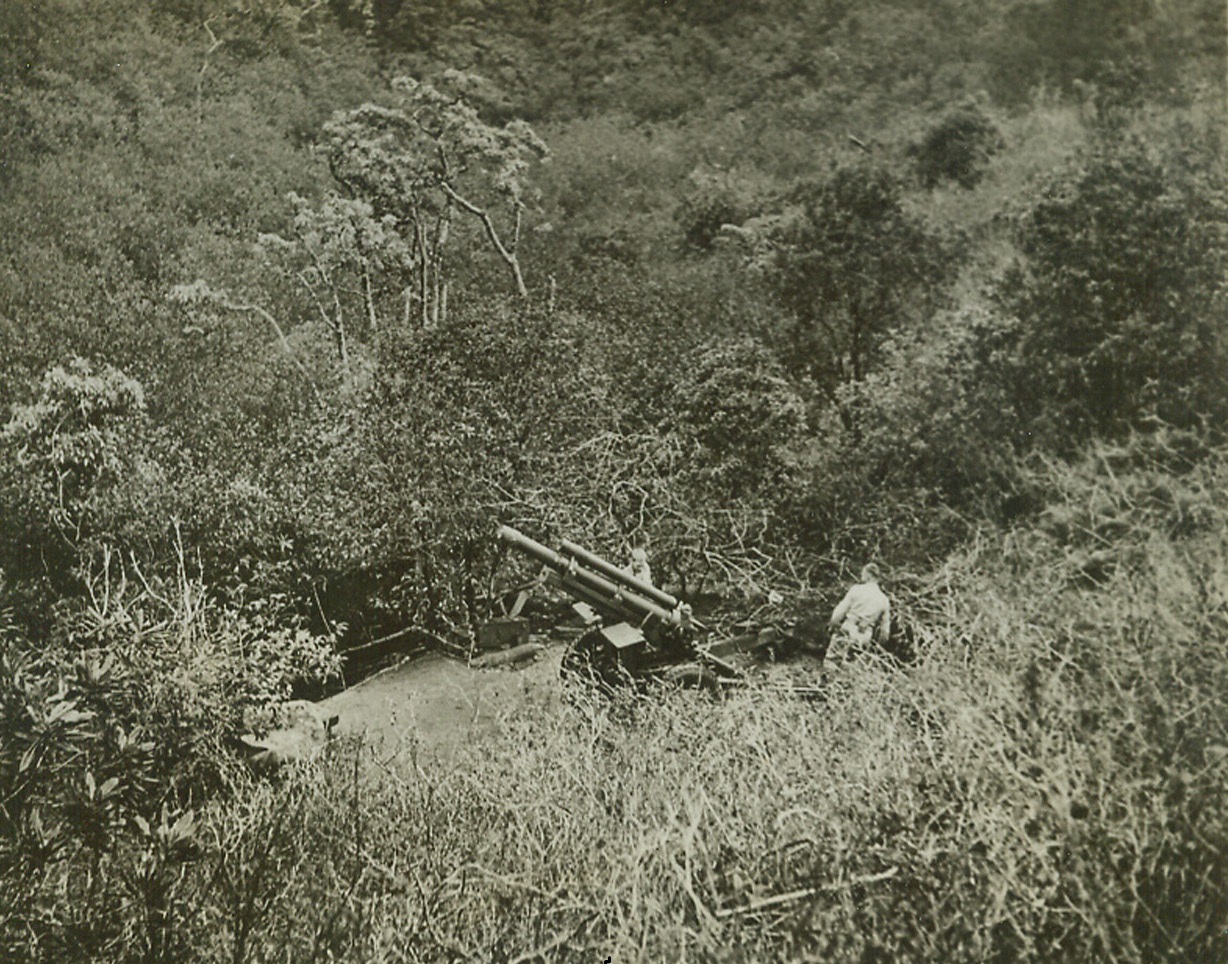 Nature’s Camouflage, 5/6/1942. Hawaii—This field gun ‘somewhere in Hawaii’ hidden by thick trees from the air, is ready to hurl projectiles on any invading force. Hawaii received its lesson on Dec. 7.Credit: ACME.; 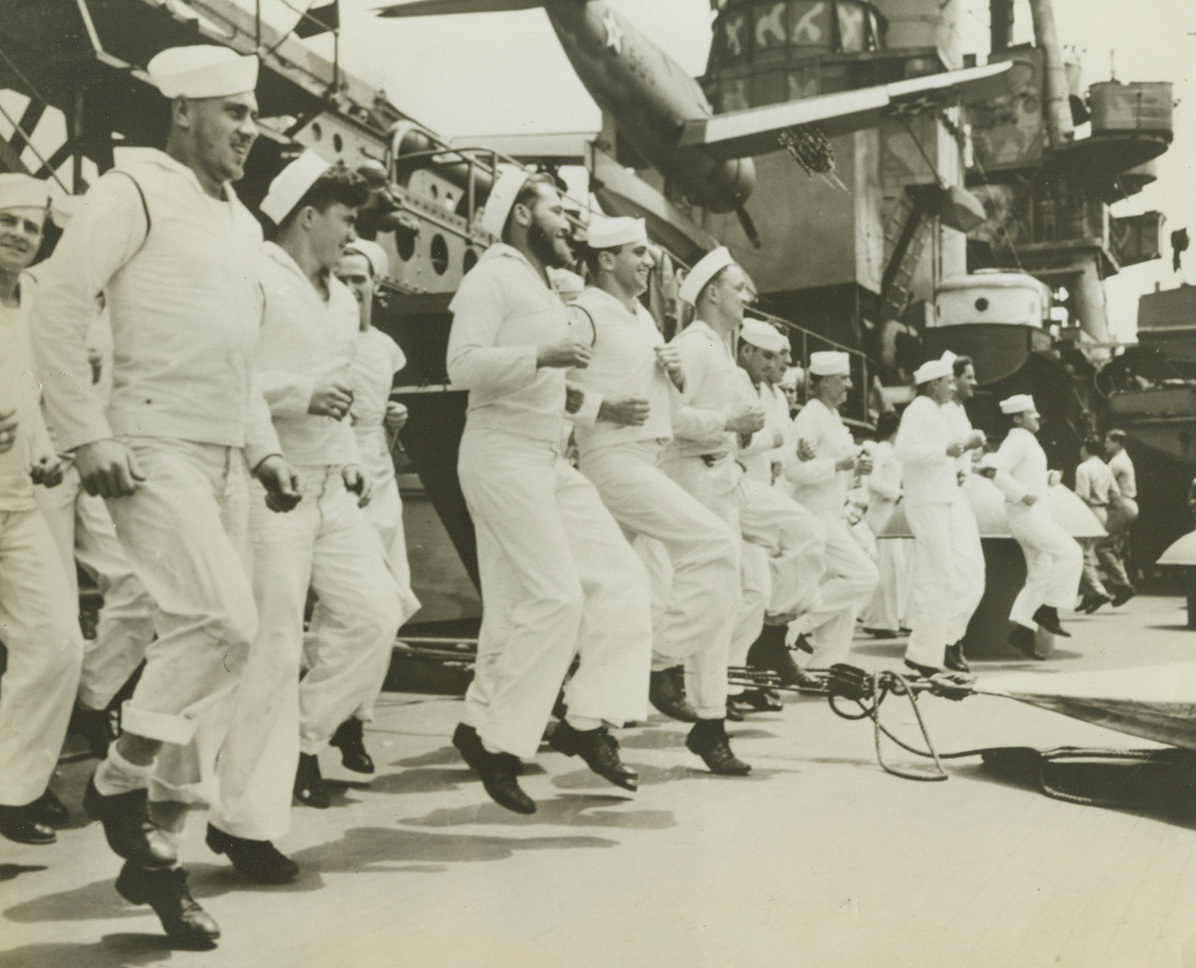 Keeping in Fightin’ Shape, 5/13/1942. Atlantic -- Sailors go through physical drill aboard an American warship guarding a convoy in the Atlantic Ocean. One gob sports an extra-heavy beard. Credit: ACME; 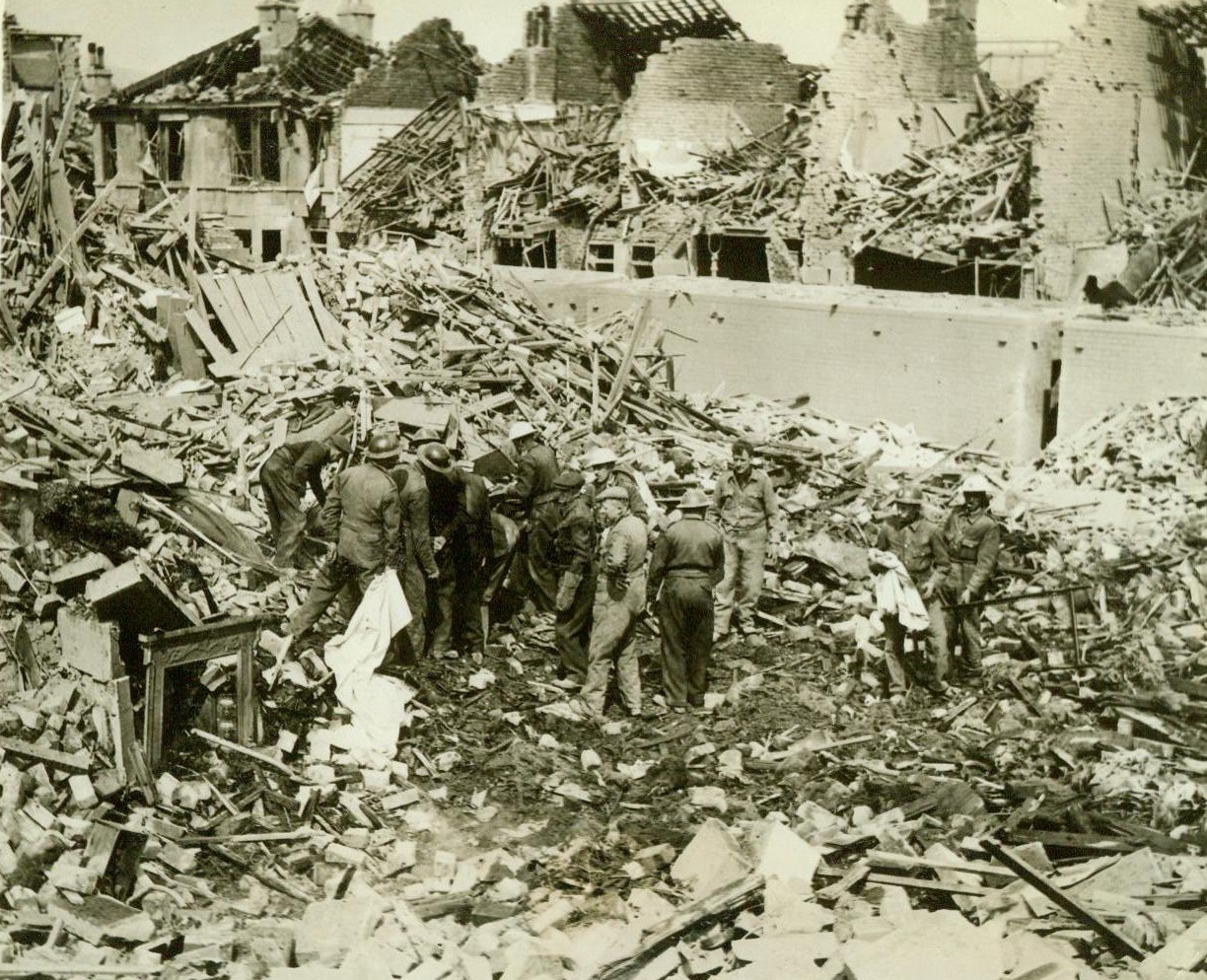 After Nazi Reprisal Raid, 5/18/1942. England - Civil Defense workers search the ruins of buildings bombed in the recent German reprisal raid on Bath, a village in Southwest England which housed evacuees from blitzed areas. In background are air raid shelters which remained intact although structures all around were shattered. (Passed by Censor) Credit: ACME; 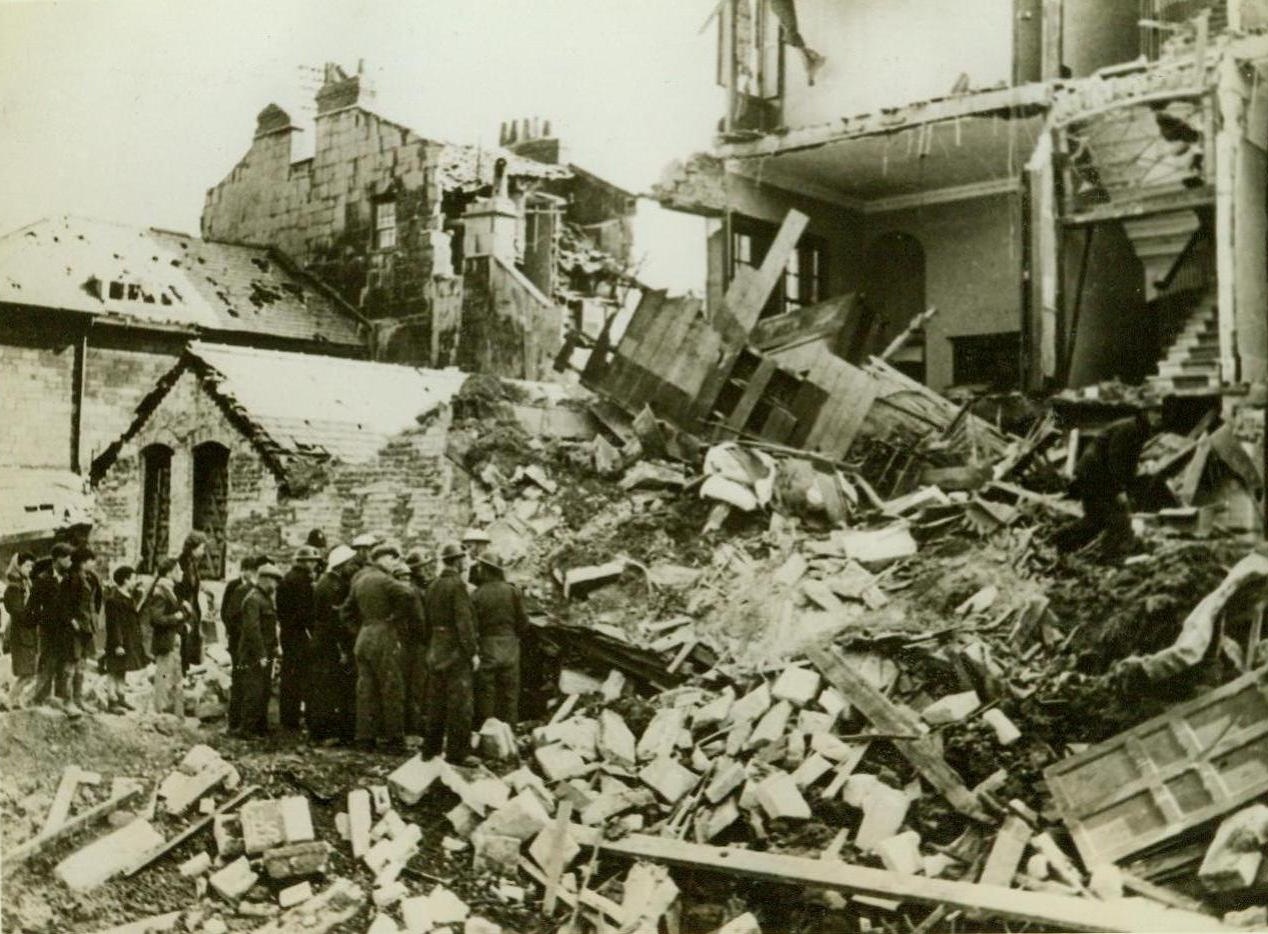 Rescue Family Trapped In Blitzed Home, 5/18/1942. England - A family was rescued from the basement under the mound of debris of this bombed house, wrecked in the second vicious reprisal raid on Bath, a village in Southwest England. Many children had been evacuated there from bombed areas. (Passed by censor) Credit: ACME; 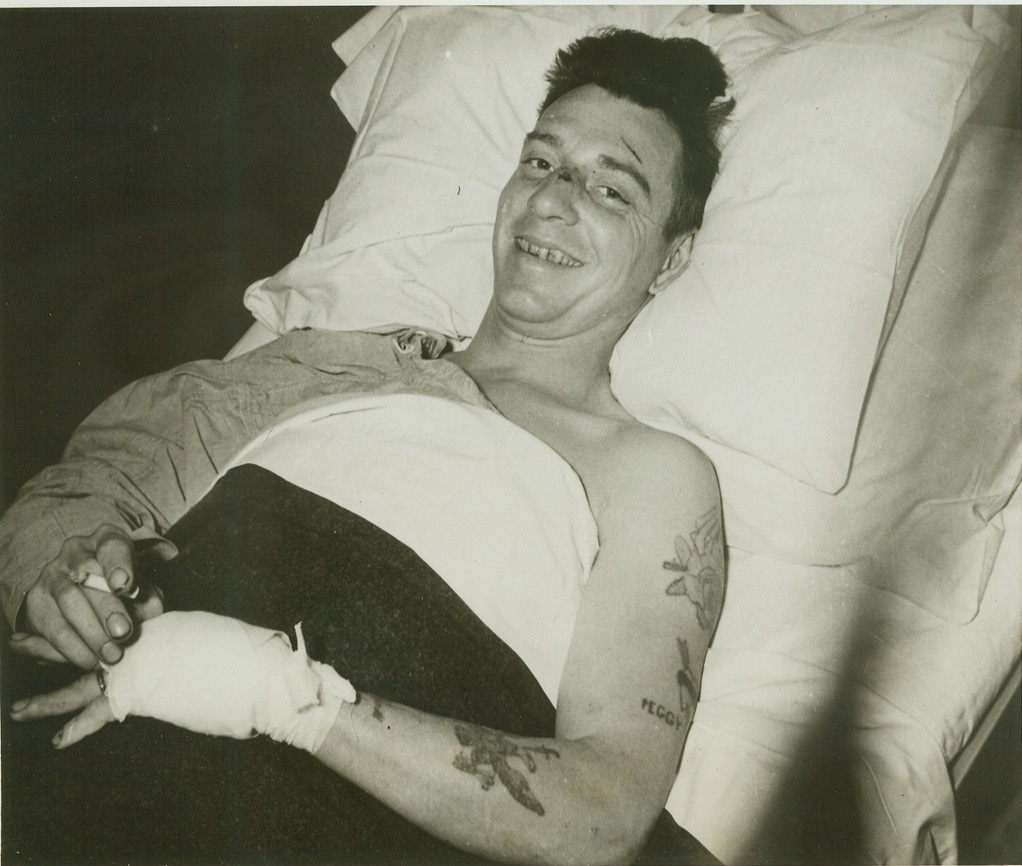 SURVIVOR OF ANDREWS CRASH, 5/25/1942. Sgt. George A. Eisel, who was the only survivor of the Iceland plane crash where Lt. Gen. Frank M. Andrews and 13 others met death, grins from his hospital bed in Iceland. The Columbus, Ohio soldier has survived another crash in North Africa that took the lives of three comrades. He holds the DFC, the Air Medal with three oak leaf clusters and the Purple Heart. Credit: U.S. Army Signal Corps photo via OWI Radiophoto from Acme;