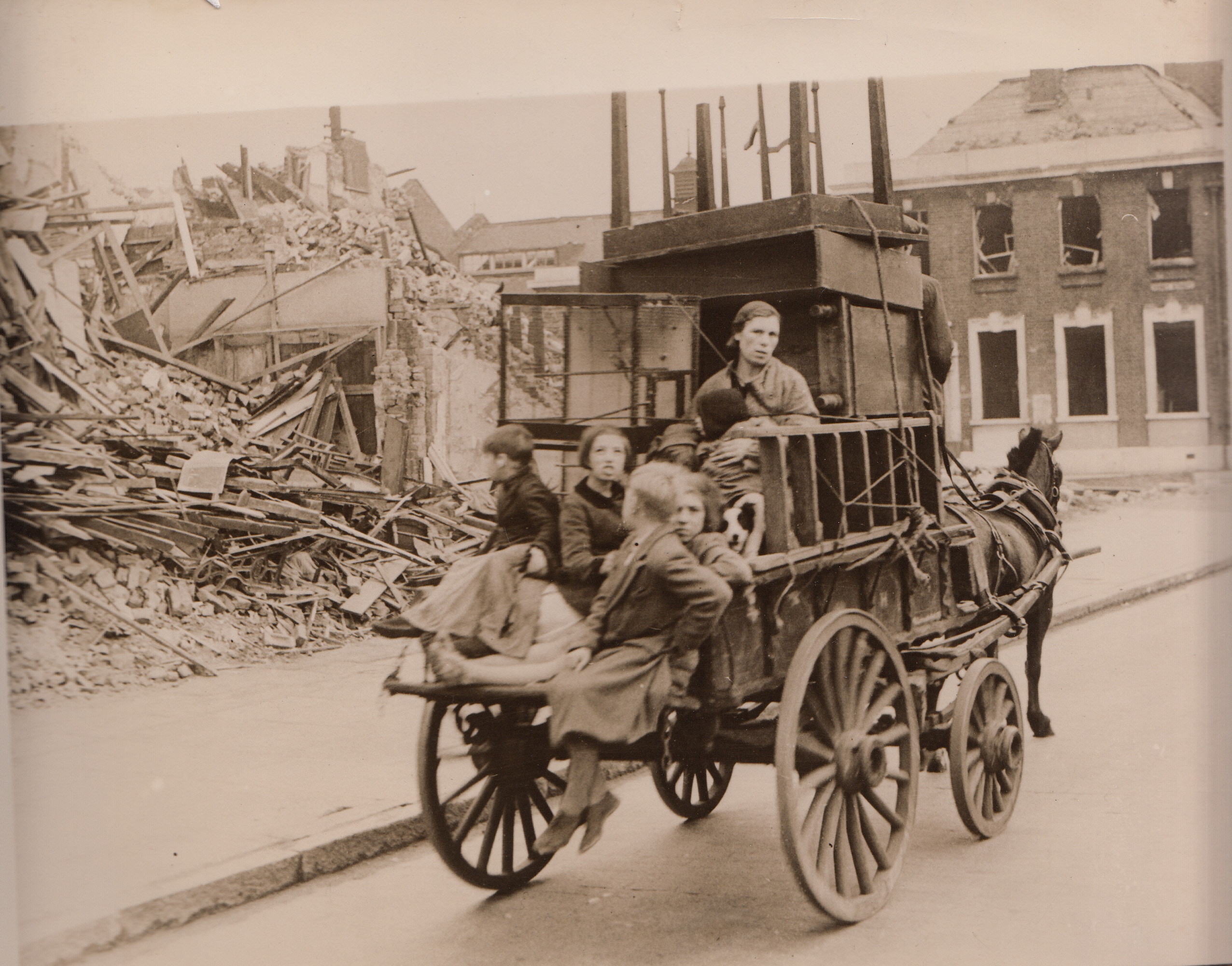 Out of the East End, 10/1/1940 LONDON - A woman and children bombed out of their homes in London's East End drive past ruined buildings on a cart piled high with household belongings as they search for new shelter. Even the cage of birds was taken along.; 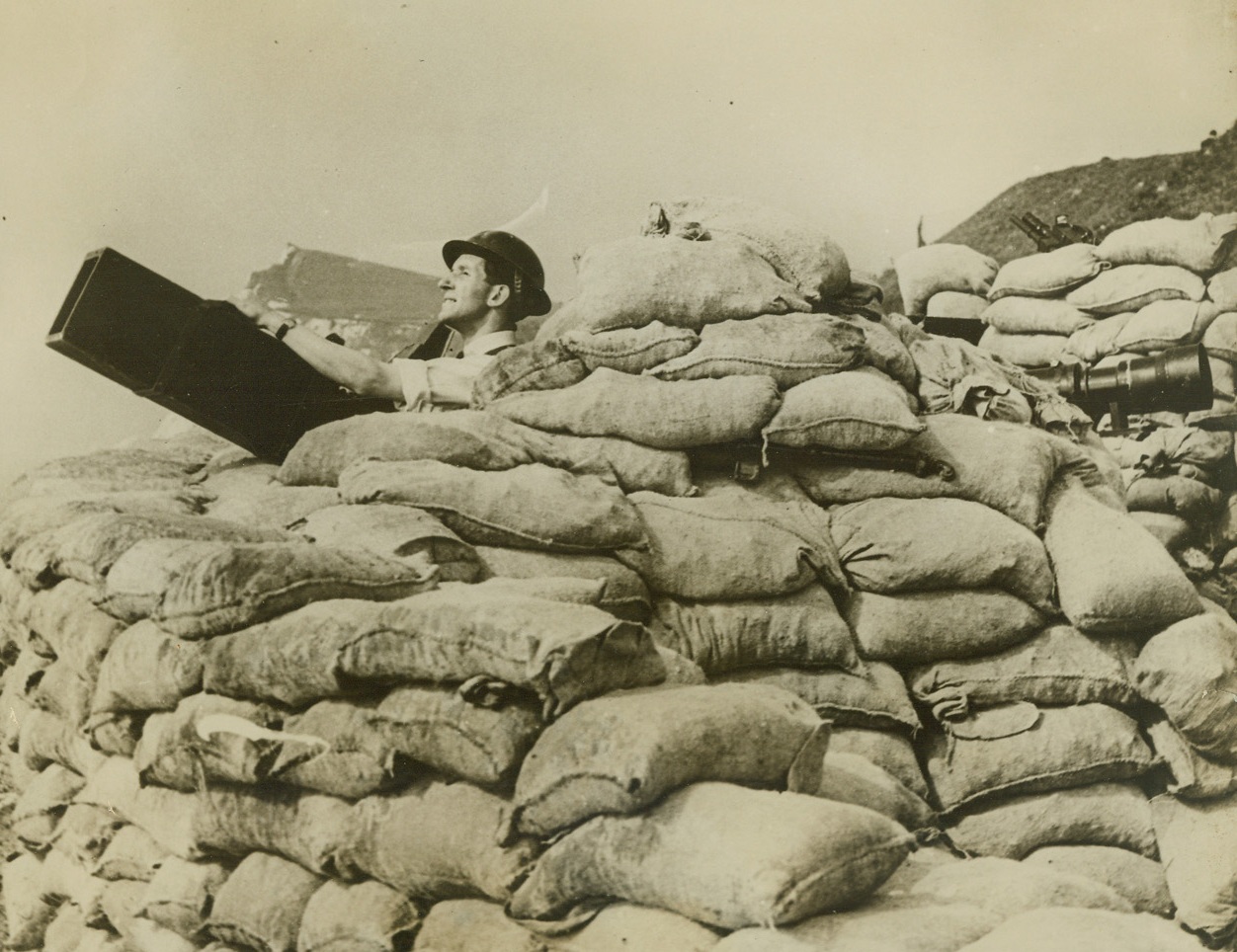 ACME PHOTOGRAPHER “SHOOTS” WAR FROM SANDBAGS, 10/1/1940 DOVER, ENGLAND – H.P. Andrews, Acme newspictures staff photographer in England, operating a long focus camera from a sandbag emplacement on the Dover Cliffs, from where can be had a “grandstand” view of the war along Britain’s Southeast coast. Andrews wears a steel helmet for additional protection. Credit: Acme; 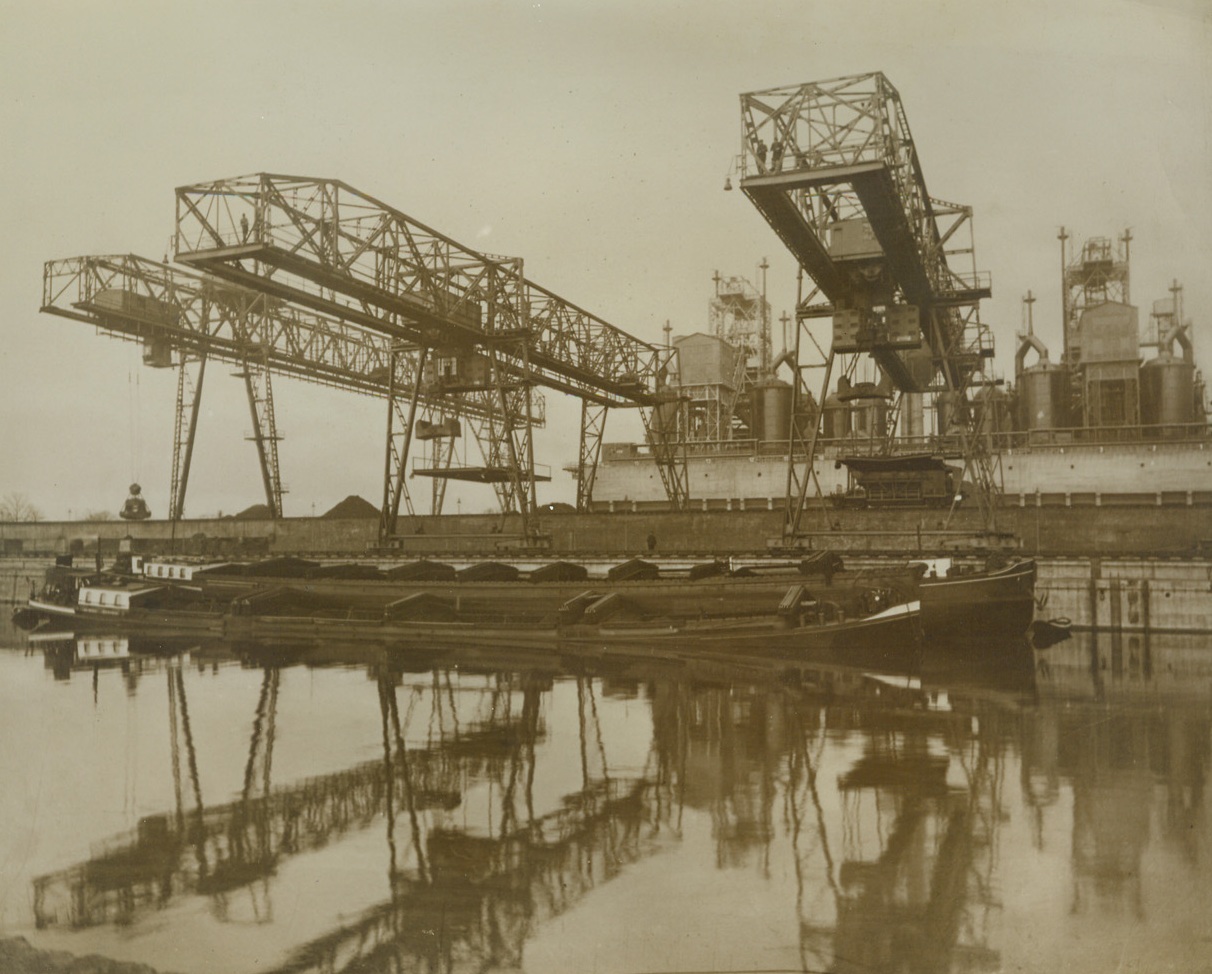 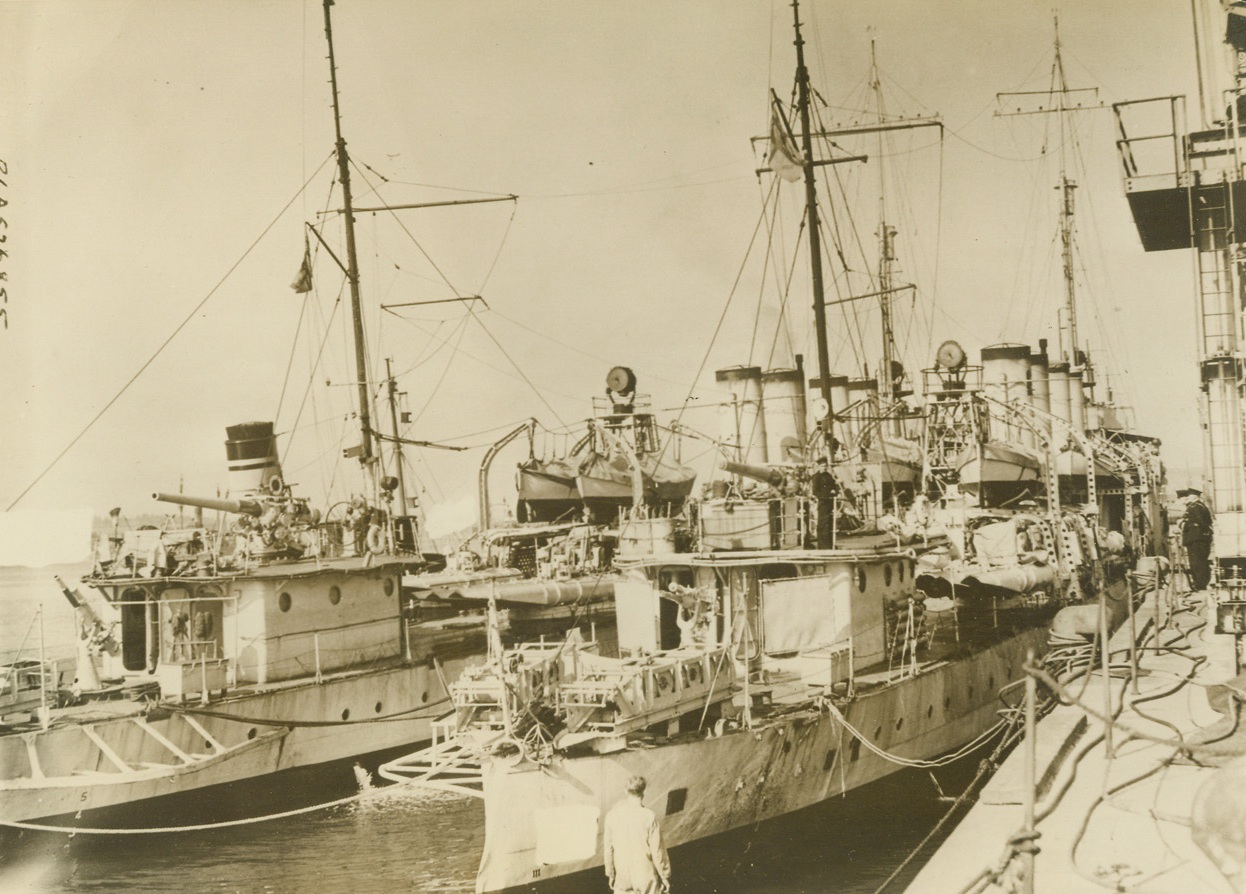 FIRST U.S. DESTROYERS ARRIVE IN BRITAIN, 10/4/1940 A BRITISH PORT—Ships of the first flotilla of the 50 U.S. destroyers transferred to Great Britain under the ships-for-bases exchange deal to cross the Atlantic under the White Ensign, ride at anchor here after their arrival. Officers and men declared themselves well satisfied with the performance of the vessels on the crossing. Credit Line (ACME); 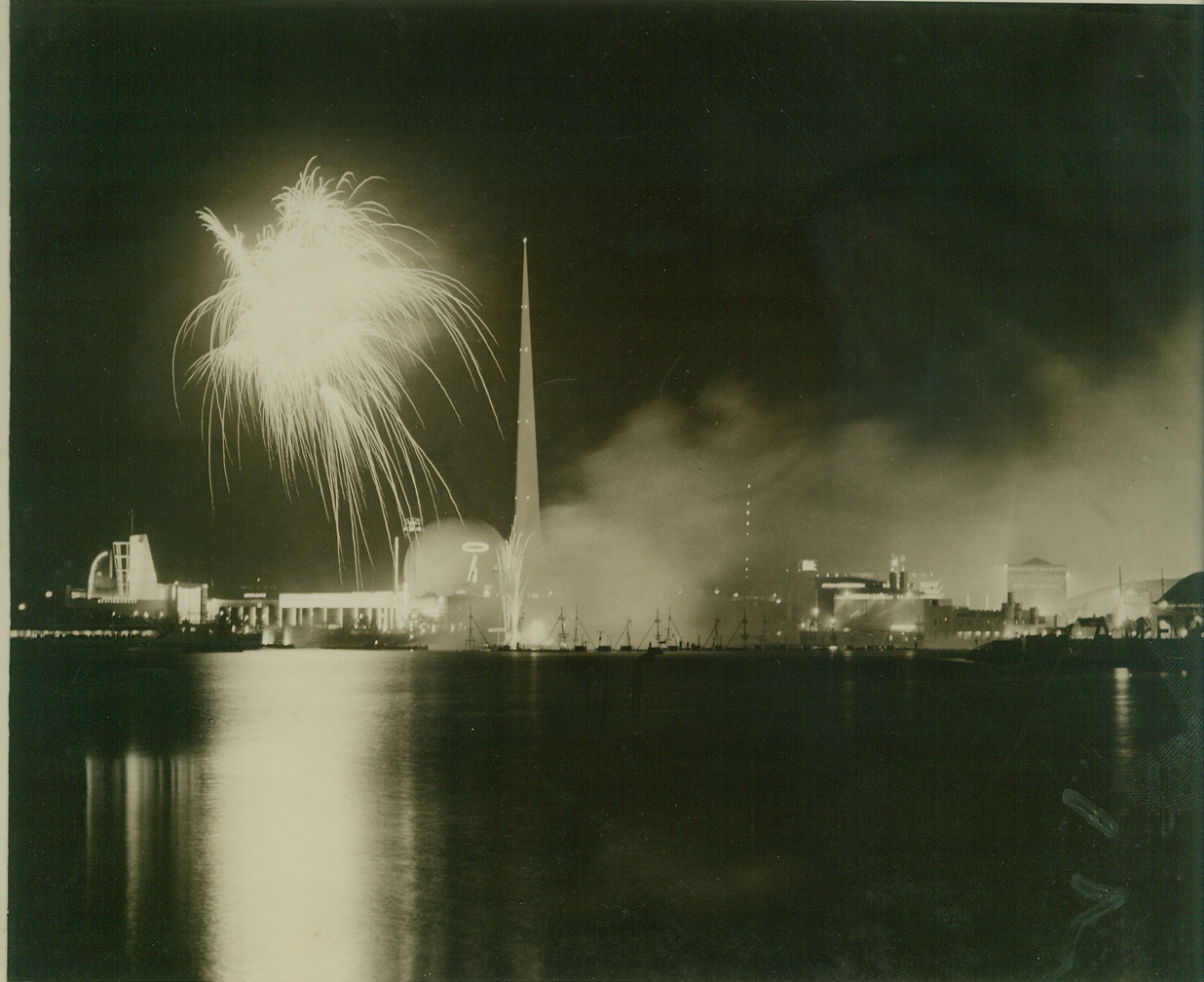 BOMBING SCENE – AMERICAN TYPE, 10/9/1940 NEW YORK CITY – Like a picture from the war zone is this scene of bombs bursting in air with blazing buildings forming the backdrop. The scene, however, is one of beauty and not one of horror. It is a view across Liberty Lake at the New York World’s Fair during the fireworks display on a cool, clear autumn night. Credit: ACME photo by staff cameraman Carl Thusgaard; 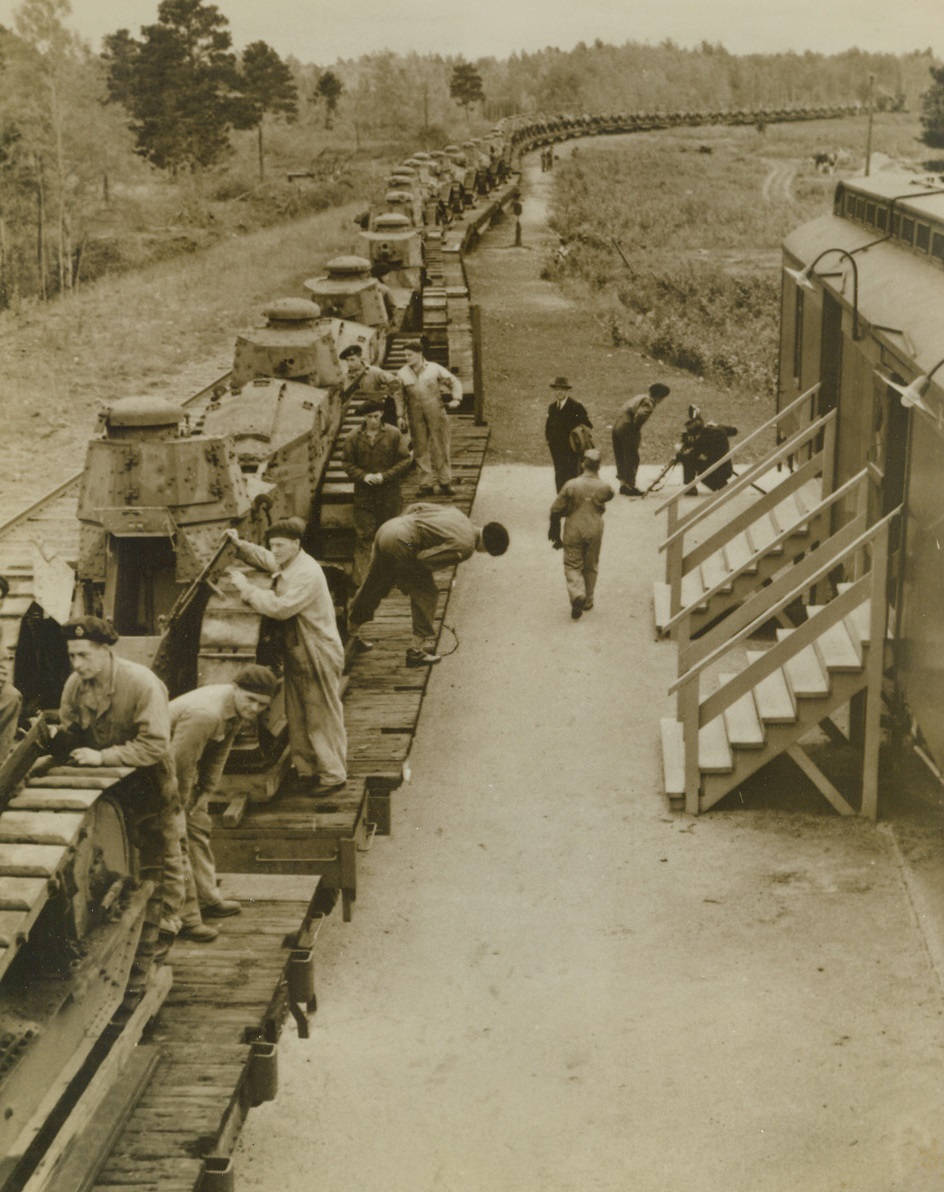 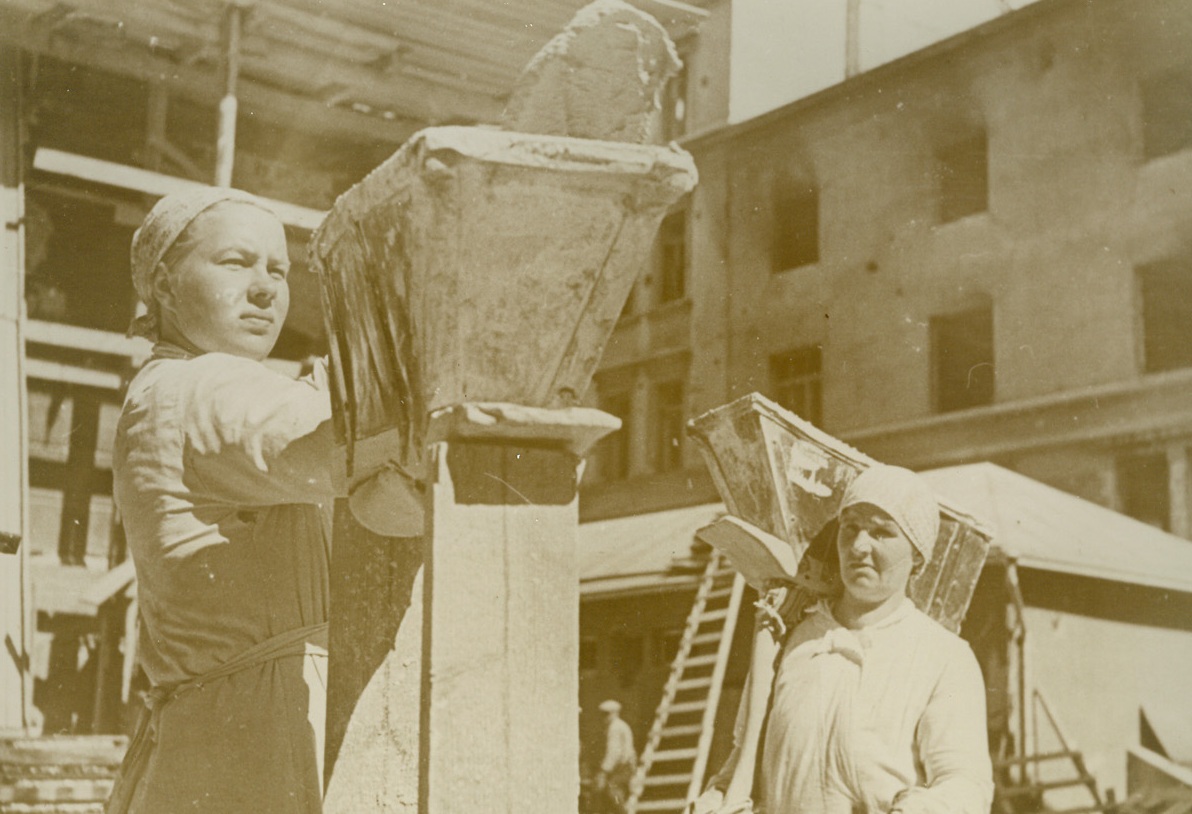 Finland Rebuilds, 10/11/1940 HELSINKI, FINLAND—As Europe is razed by devastating air raids, Little Finland is busy rebuilding, repairing similar havoc wrought by the military claws of the Russian Bear when it came lumbering into the frozen north. This photo shows some of the hardy Finnish women who are working as hod carriers for brick-layers busy rebuilding in Helsinki. Credit: ACME.; 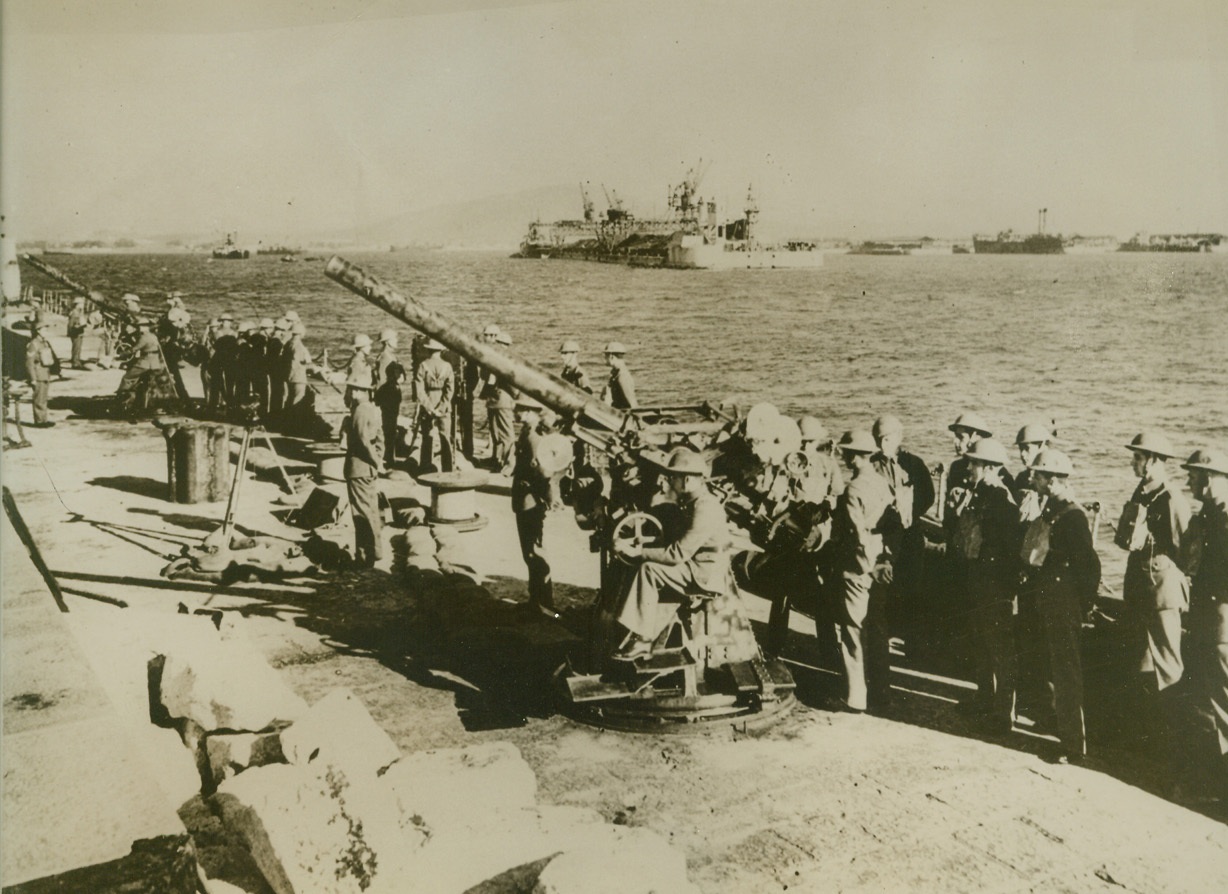 ON GUARD ON THE ROCK, 10/11/1940 GIBRALTAR—Gun crew lined up by their weapons on Gibraltar, Britain’s strategic fortress controlling the western entrance to the Mediterranean. Gibraltar has been bombed repeatedly by Italian planes and at lease once by French planes. It is often mentioned as an Axis objective, to be conquered by a drive from Spain. Credit: Acme; 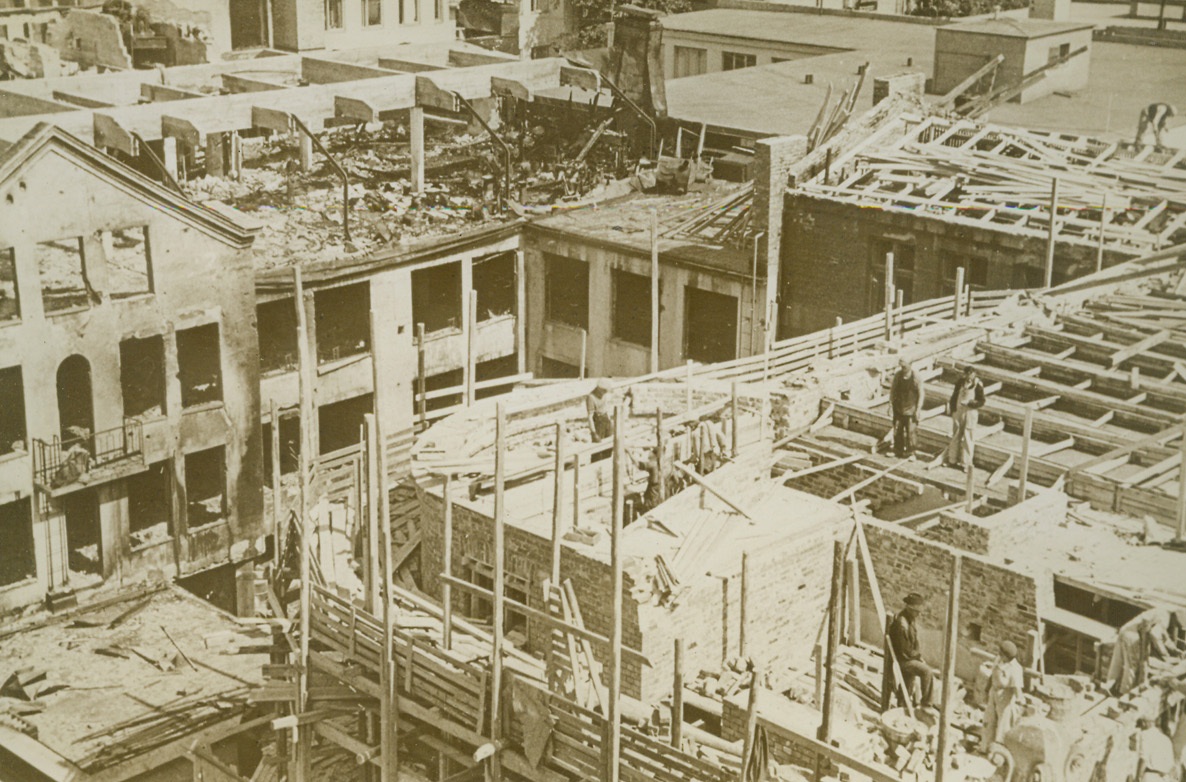 Finland Rebuilds, 10/11/1940 HELSINKI, FINLAND—As Europe is razed by devastating air raids, little Finland is busy rebuilding and repairing havoc wrought by the military claws of the Russian bear when it came lumbering into the frozen North. This photo shows men at work rebuilding in Helsinki against a background of bomb blasted buildings. Credit: ACME; 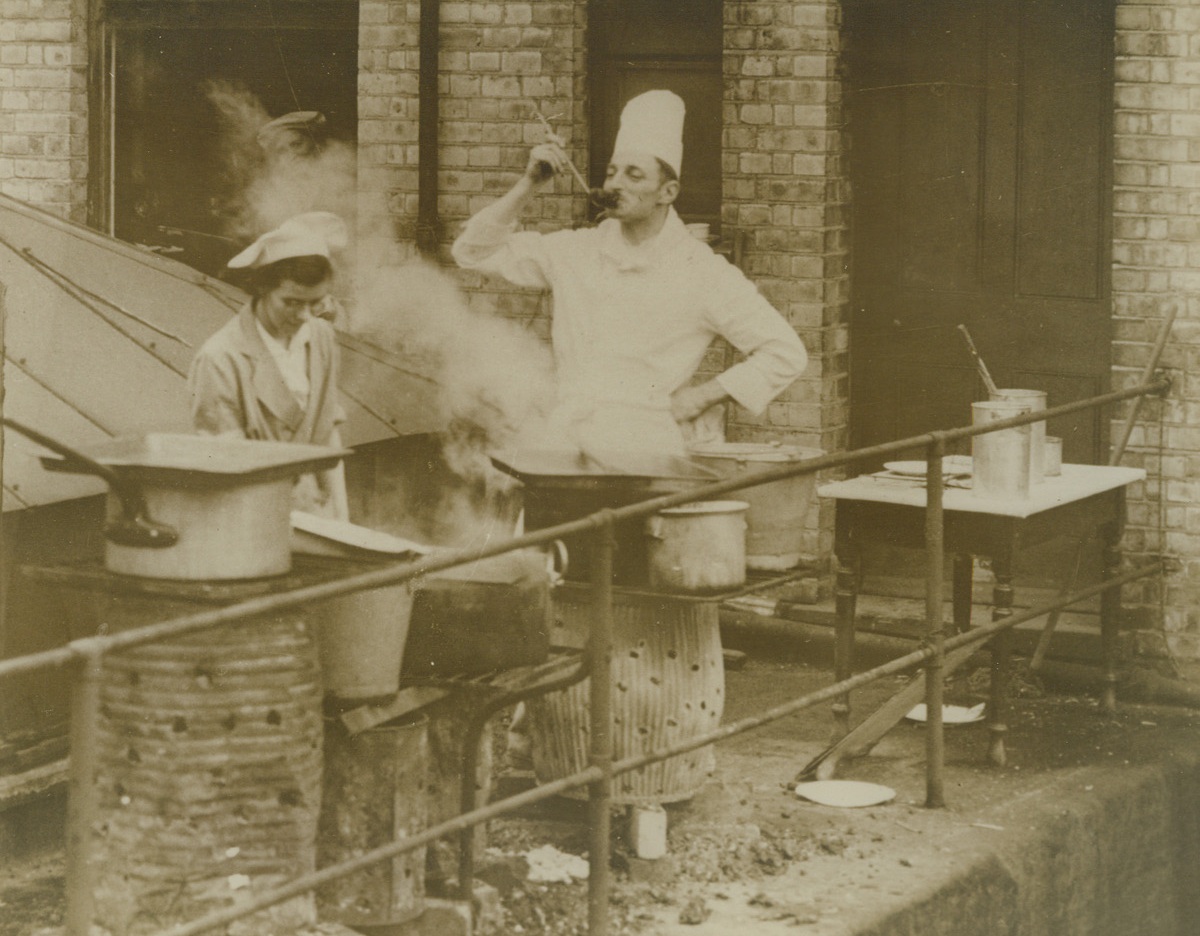 Field Kitchen On London Roof, 10/11/1940 London – Chef Parkes sampling one of the meals he prepares in a field kitchen on the roof of a well-known London store. Despite the interruptions of air raid alarms, Chef Parkes is preparing lunches for hundreds of the store’s customers. He whips up a four-course meal in this improvised kitchen. Credit: ACME; 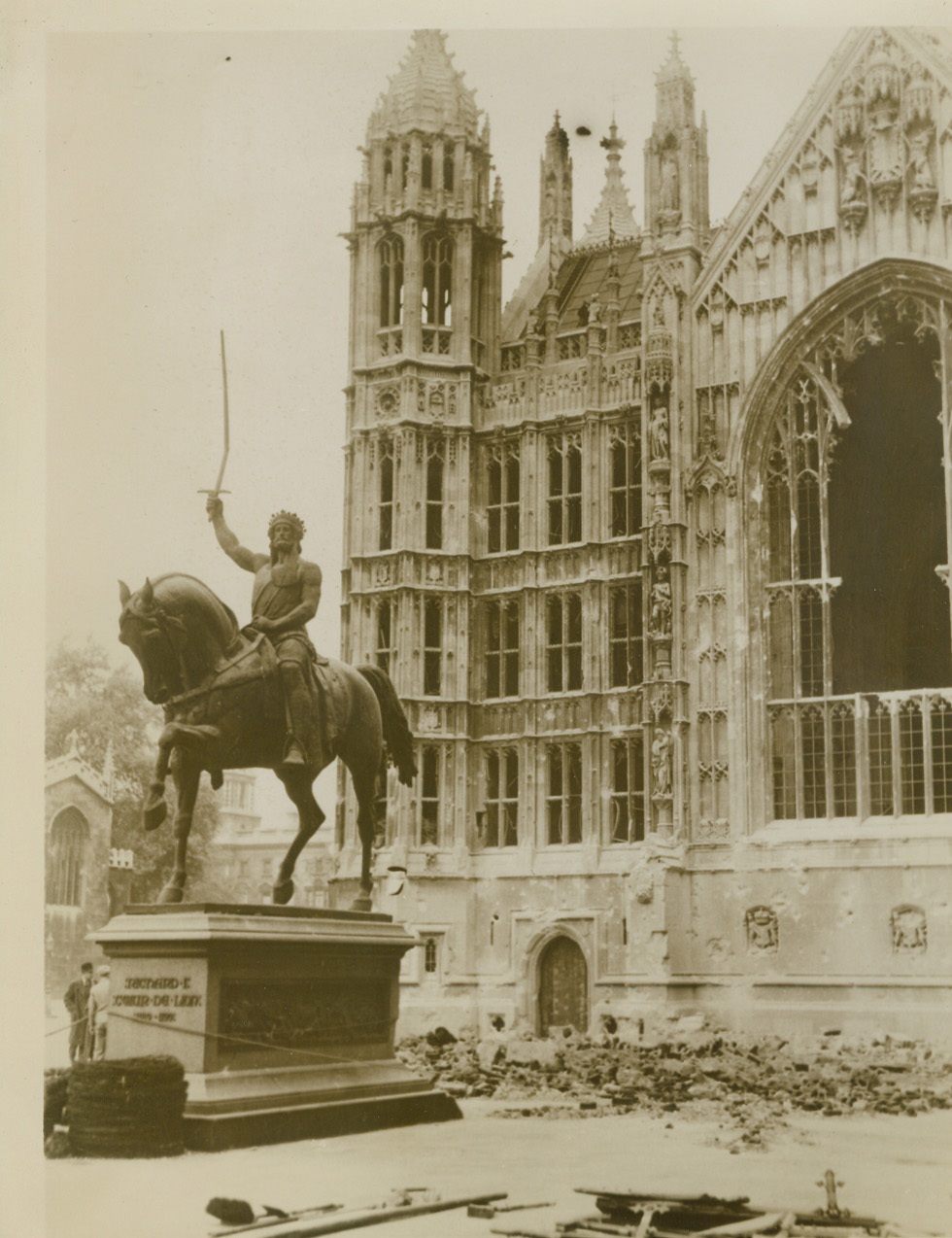 Richard Still Rides, 10/18/1940 LONDON -- When a bomb burst near the Houses of Parliament during a recent German air raid, the bronze statue of Richard I (Richard Coeur De Lion) escaped with but a bent sword. Note damage done to the building in background. Credit: (ACME); 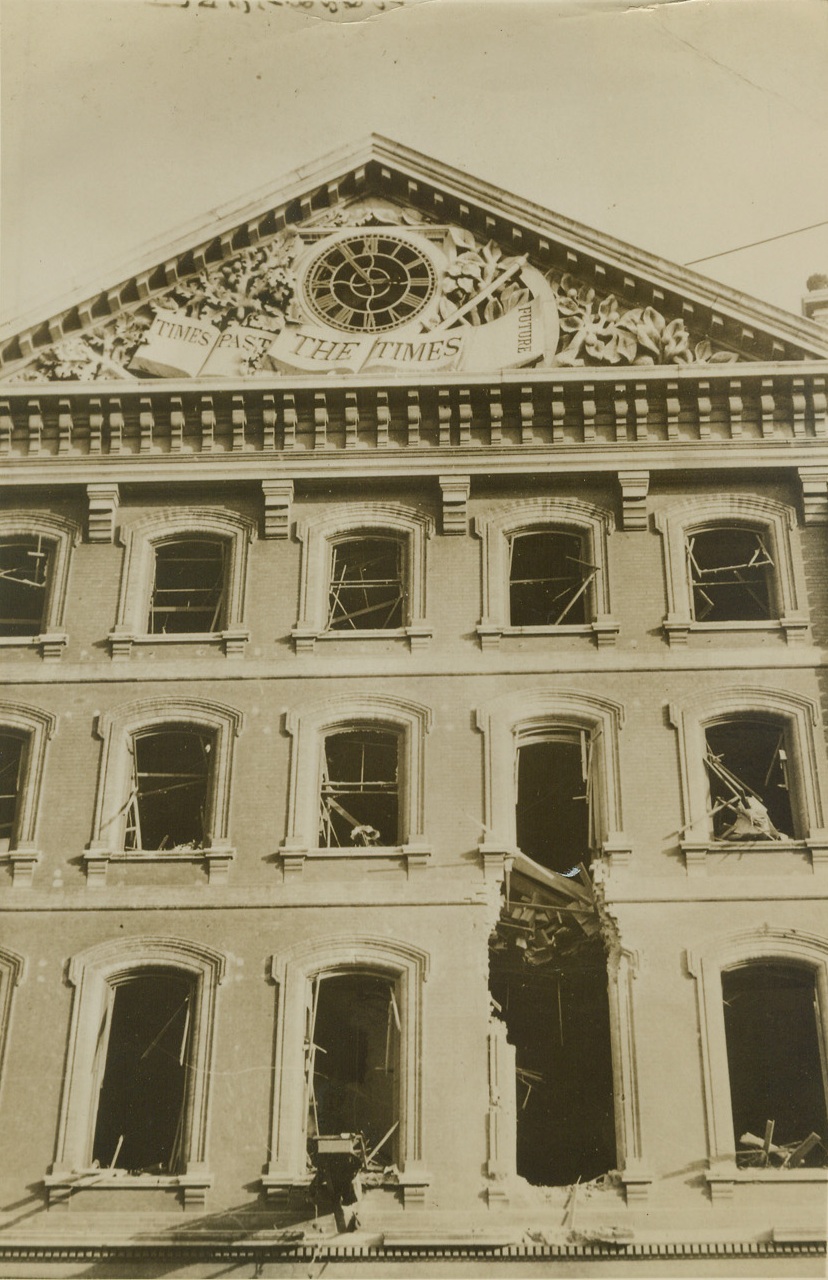 London Newspaper Office Hit, 10/18/1940 LONDON -- The building housing the London Times, one of the world's outstanding newspapers, was a victim of one of Germany's night air raids on the central London area. The building is located in Queen Victoria Street. Credit: (ACME); 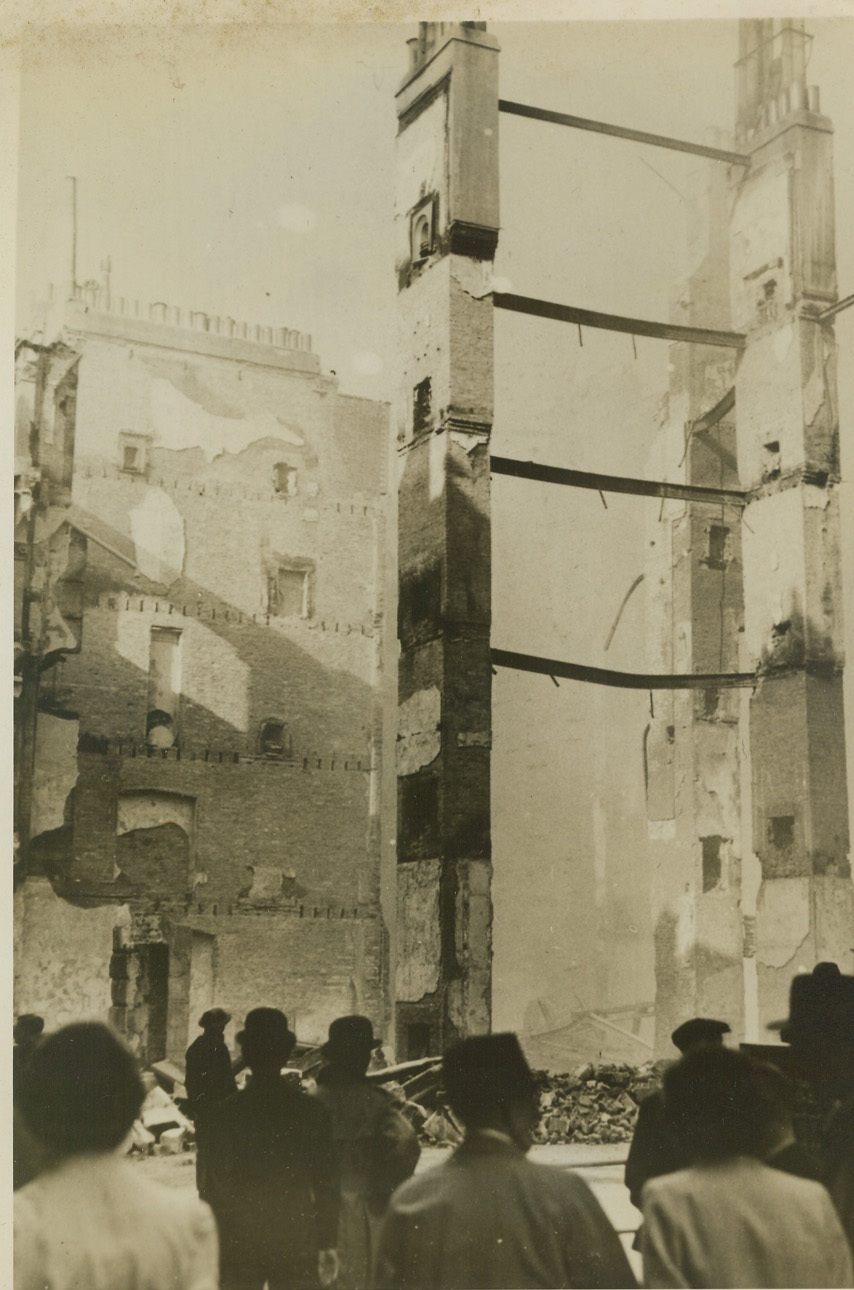 Night Raiders Concentrate on Central London, 10/18/1940 LONDON -- Three tall chimney stacks were left standing after an office building had been wrecked in Chancery Lane - a center of the legal profession - during a recent night air raid by Nazi bombers. Credit: (ACME); 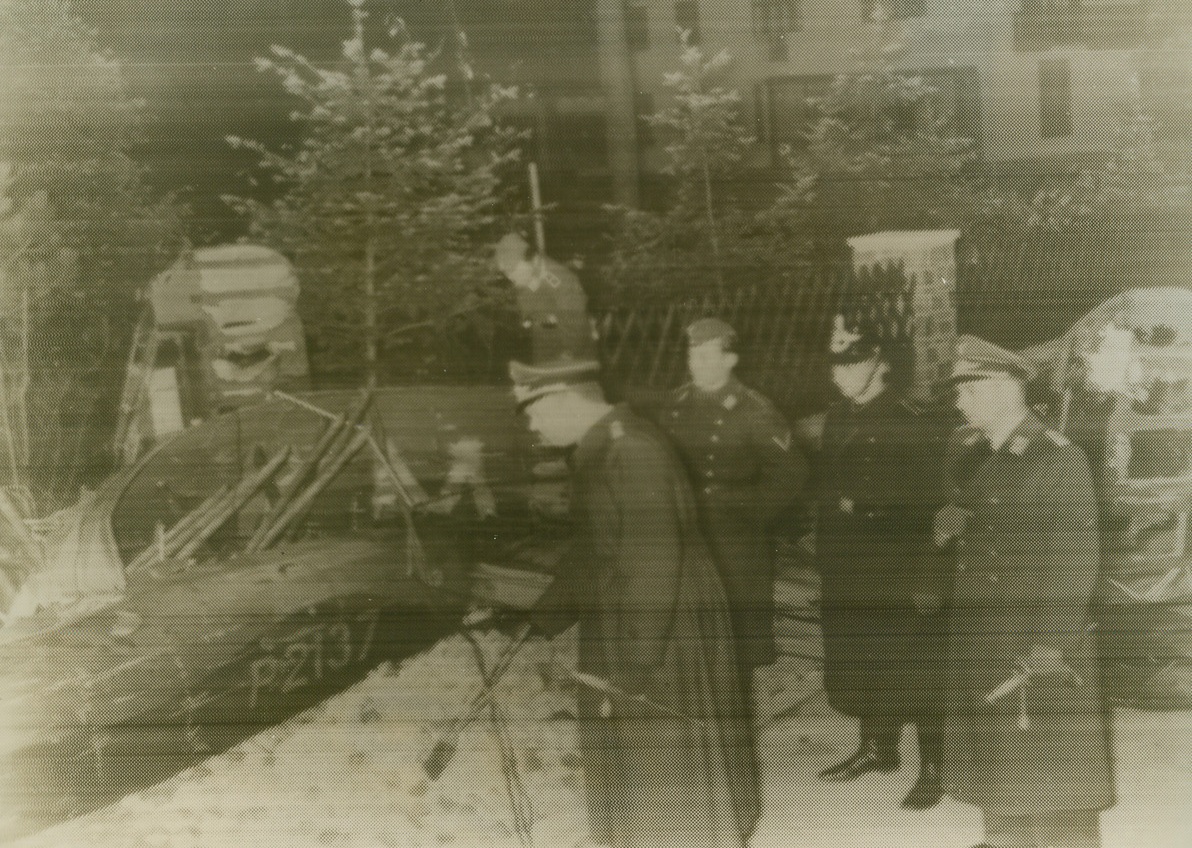 BRITISH BOMBER DOWNED IN BERLIN, 10/20/1940 BERLIN, GERMANY—German officers inspect the wreckage of the first British plane to be shot in the streets of Berlin proper, during action Oct. 20. The Nazis, charging that the British rading [sic] bombers had syruct [sic] two hospitals, threatened a “thousand-fold” revenge on England.Credit: Acme; 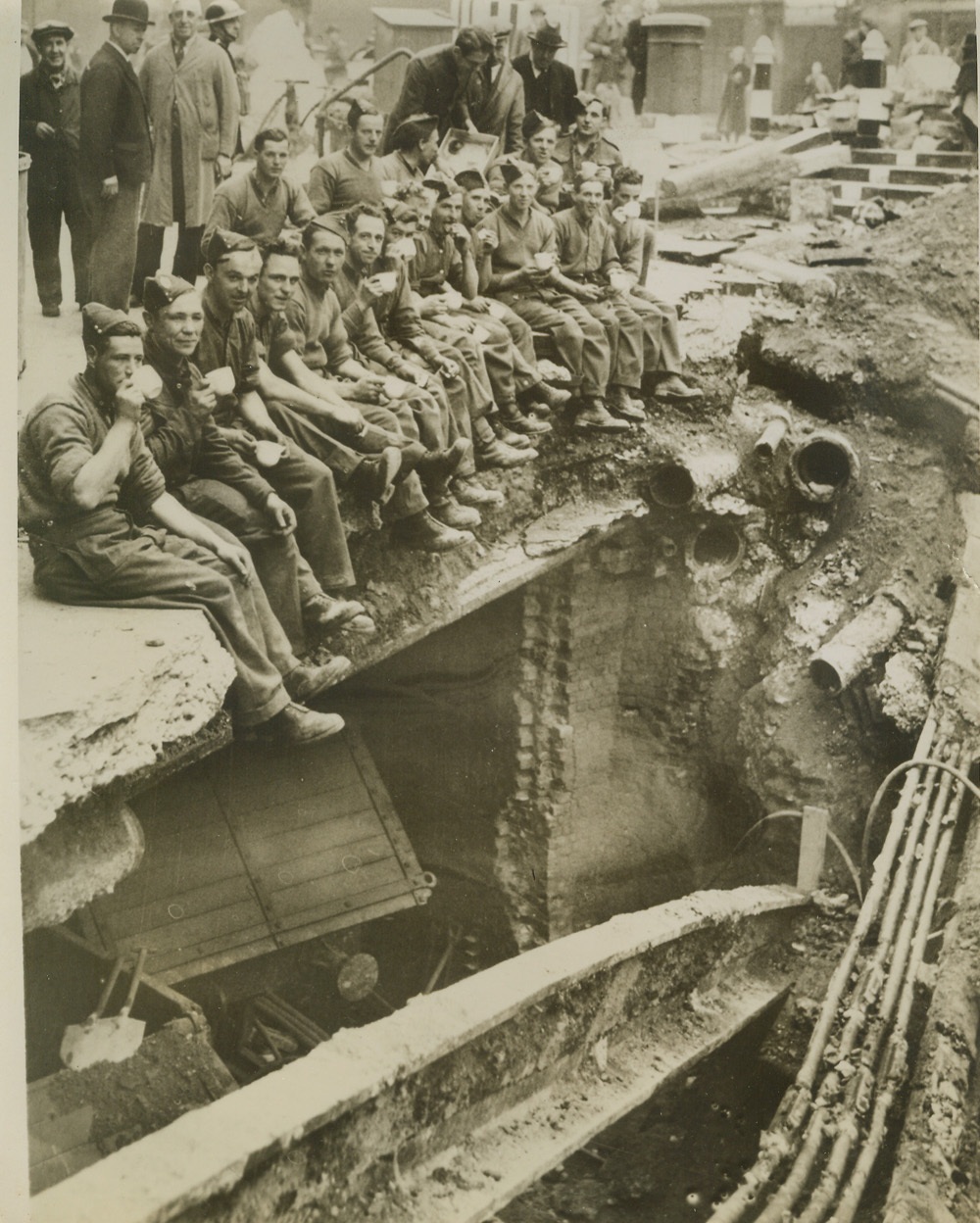 Army Pioneers Rest From Labors in London, 10/21/1940 LONDON, ENGLAND -- Sitting on the edge of a bomb crater these men of the Auxiliary Military Pioneer Corps refresh themselves with buns and tea before tackling their great task of clearing away wreckage caused by German raiders. Evidently this bomb blew the top off an underground railway. The end of a freight car and twisted rails can be seen in the left foreground. The Government has ordered 5,000 of these men into London to help the work of clearing away wreckage. Credit: (ACME); 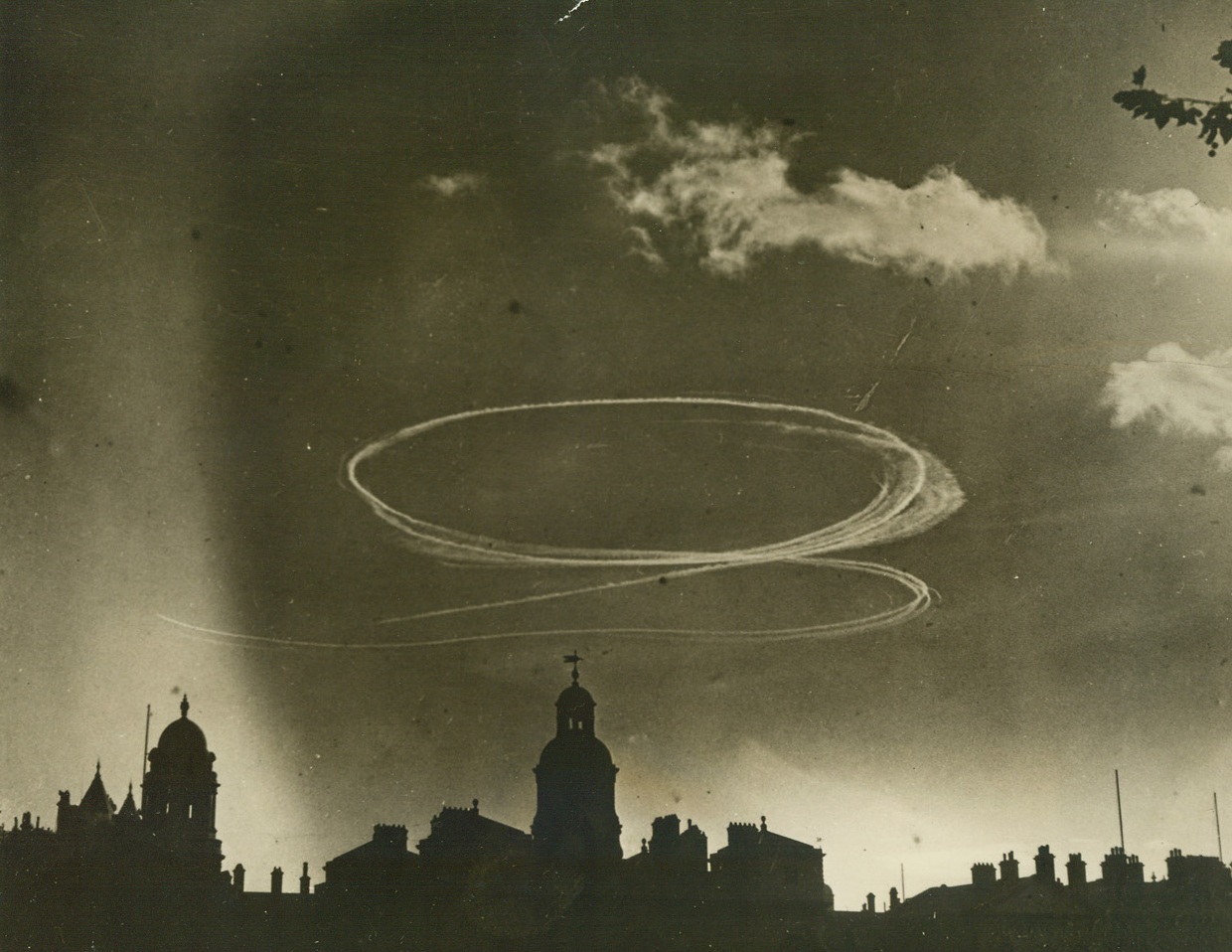 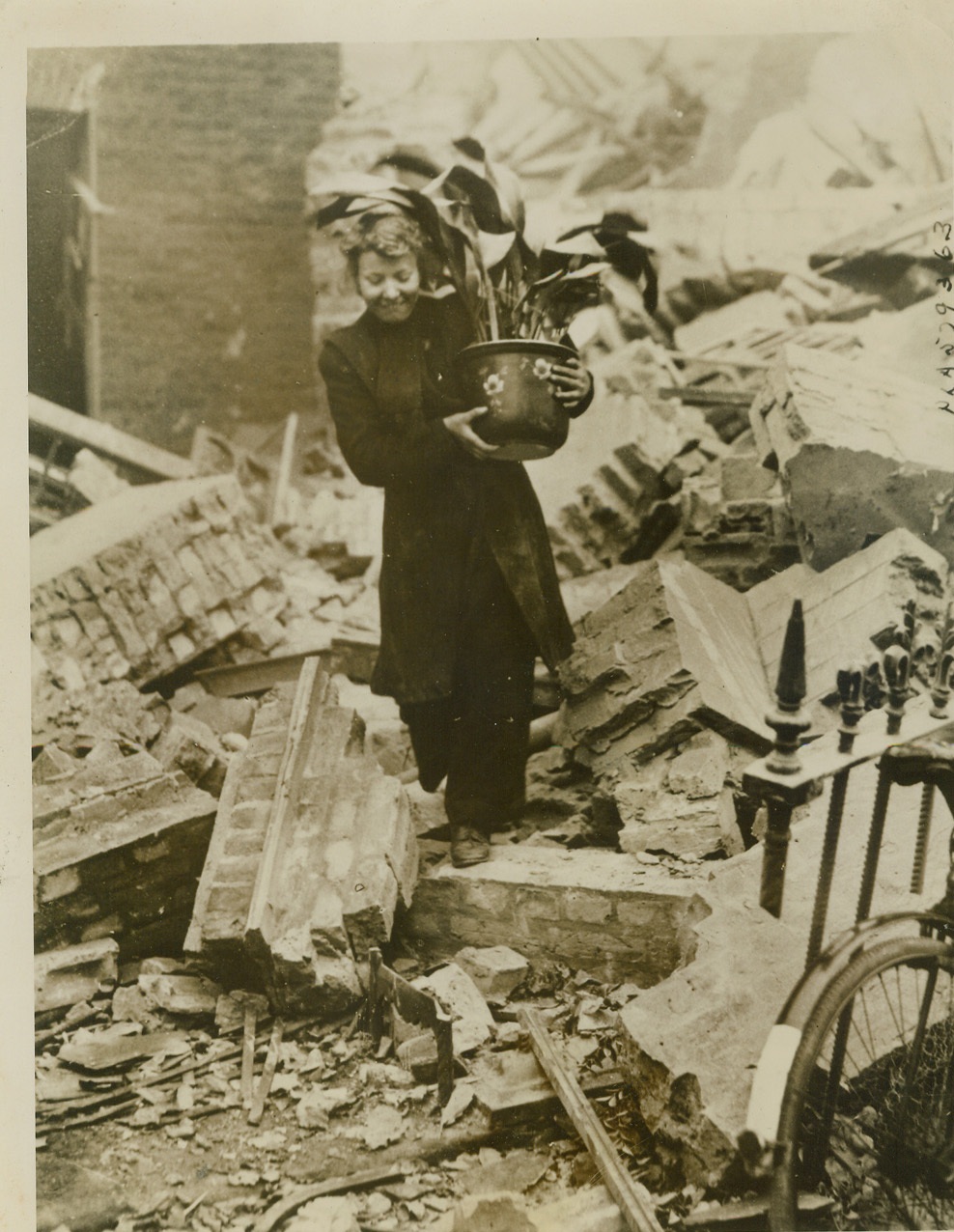 Saves Prized Possession After Air Raid, 10/23/1940 LONDON, ENGLAND -- Smiling, despite the terror from the skies, this London woman makes her way through the bomb-debris of a London street carrying her prized possession, a potted plant, which she saved from the ruins of her home. Credit: (ACME); 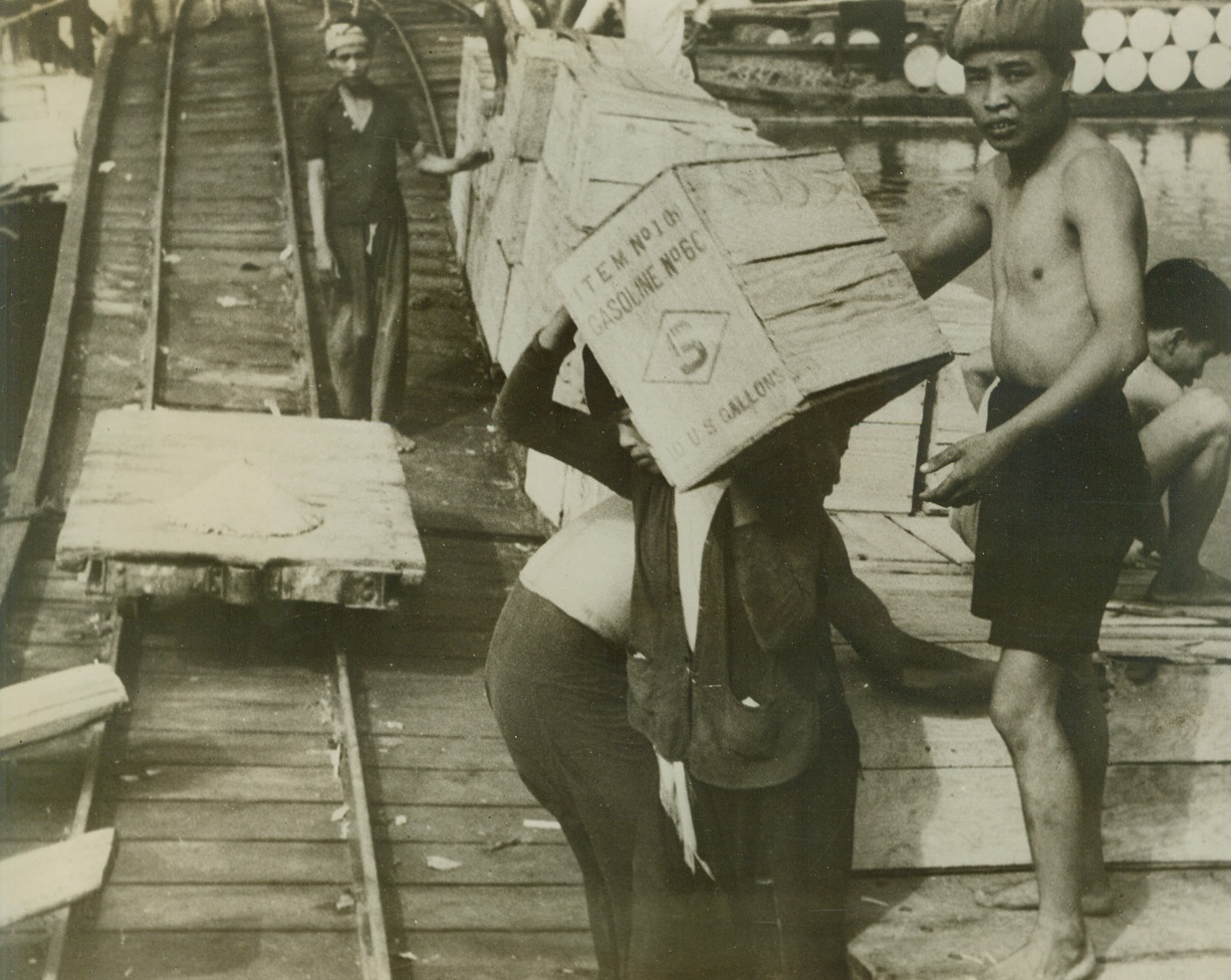 U.S. Gasoline for Lamps of Indo China, 10/27/1940 Haiphong, Indo China – Natives carry 10-gallon crates of American gasoline from the docks of Haiphong into shore. The gasoline, which belongs to Standard Oil, is part of huge U.S. holdings in Indo China now endangered by the Japan-Vichey Pact. Credit: ACME; 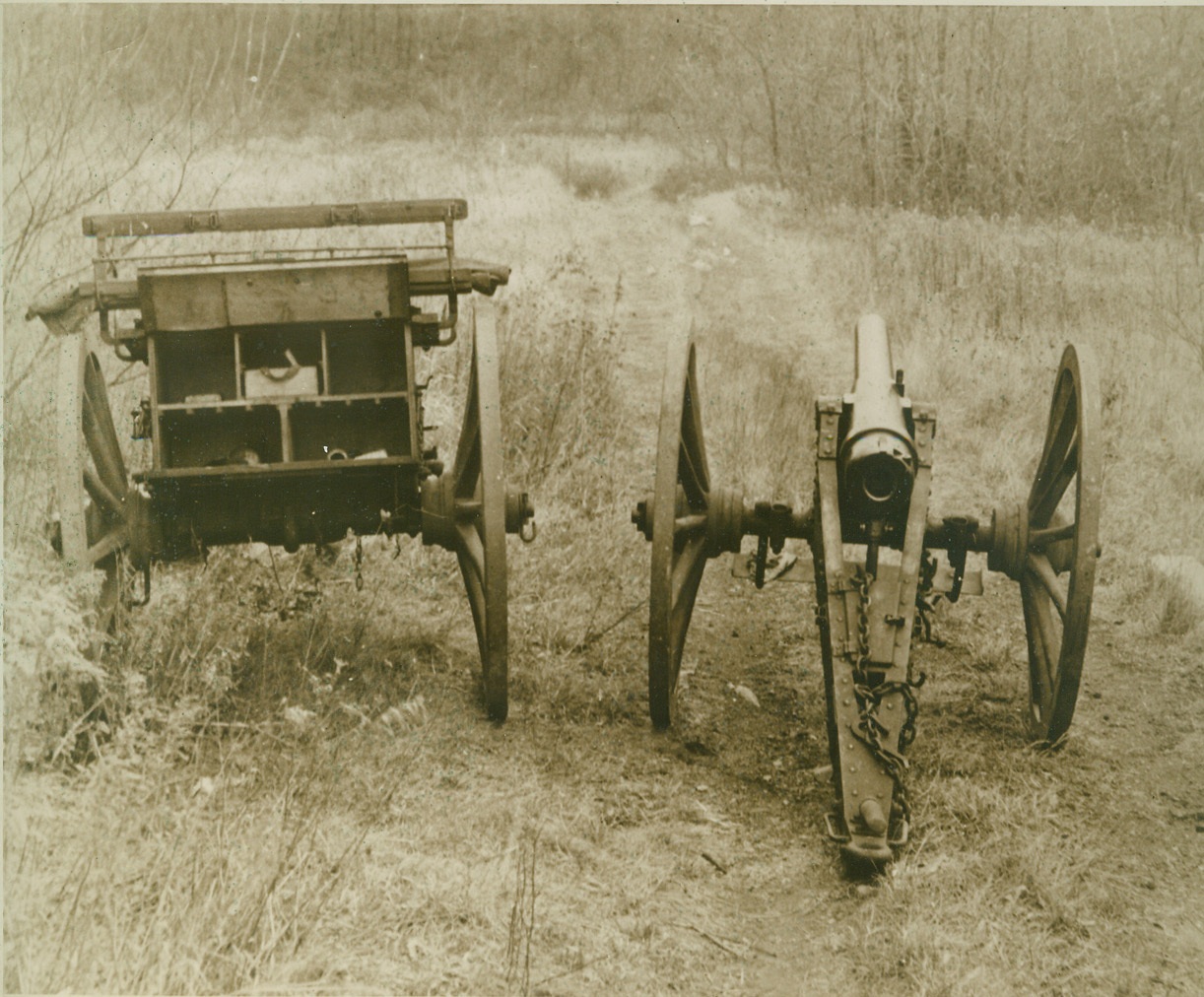 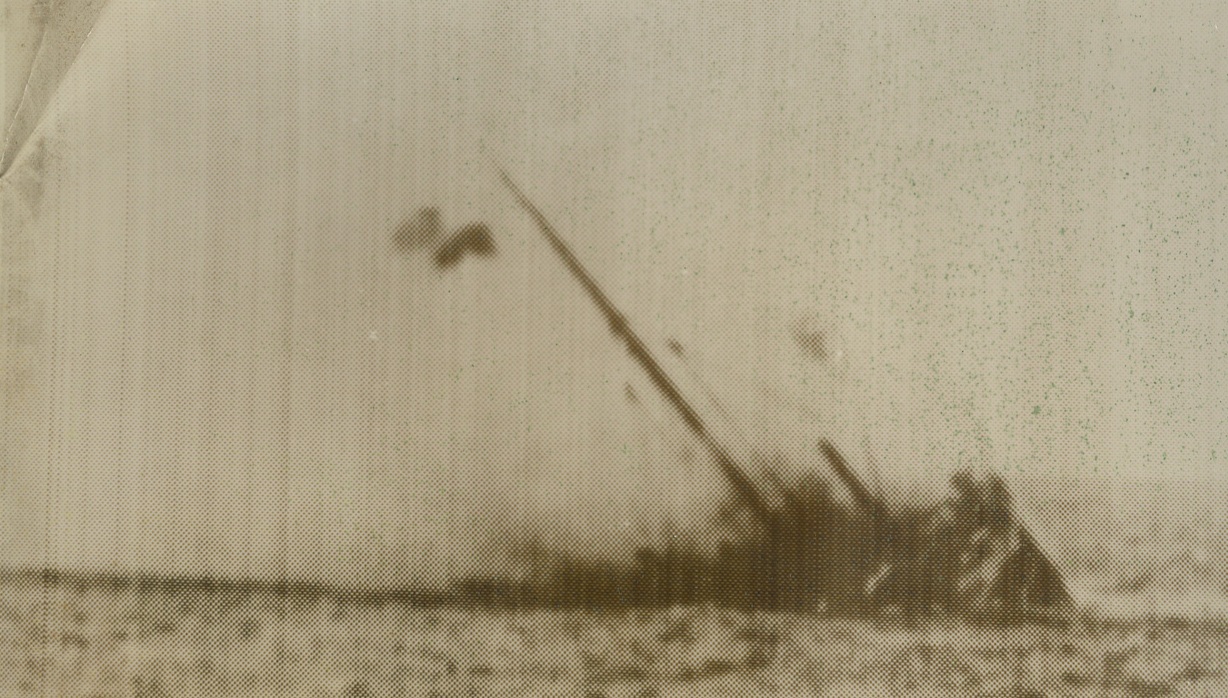 AUXILIARY CRUISER SUNK BY NAZIS, 11/8/1940 According to the German censor, this picture, radioed from Berlin to New York, shows a British auxiliary cruiser just before it plunged into the sea after a battle with a German warship. The German High Command, in a recent communiqué, reported destruction of 86,000 tons of British shipping in the North Atlantic.Credit: Acme Radiophoto; 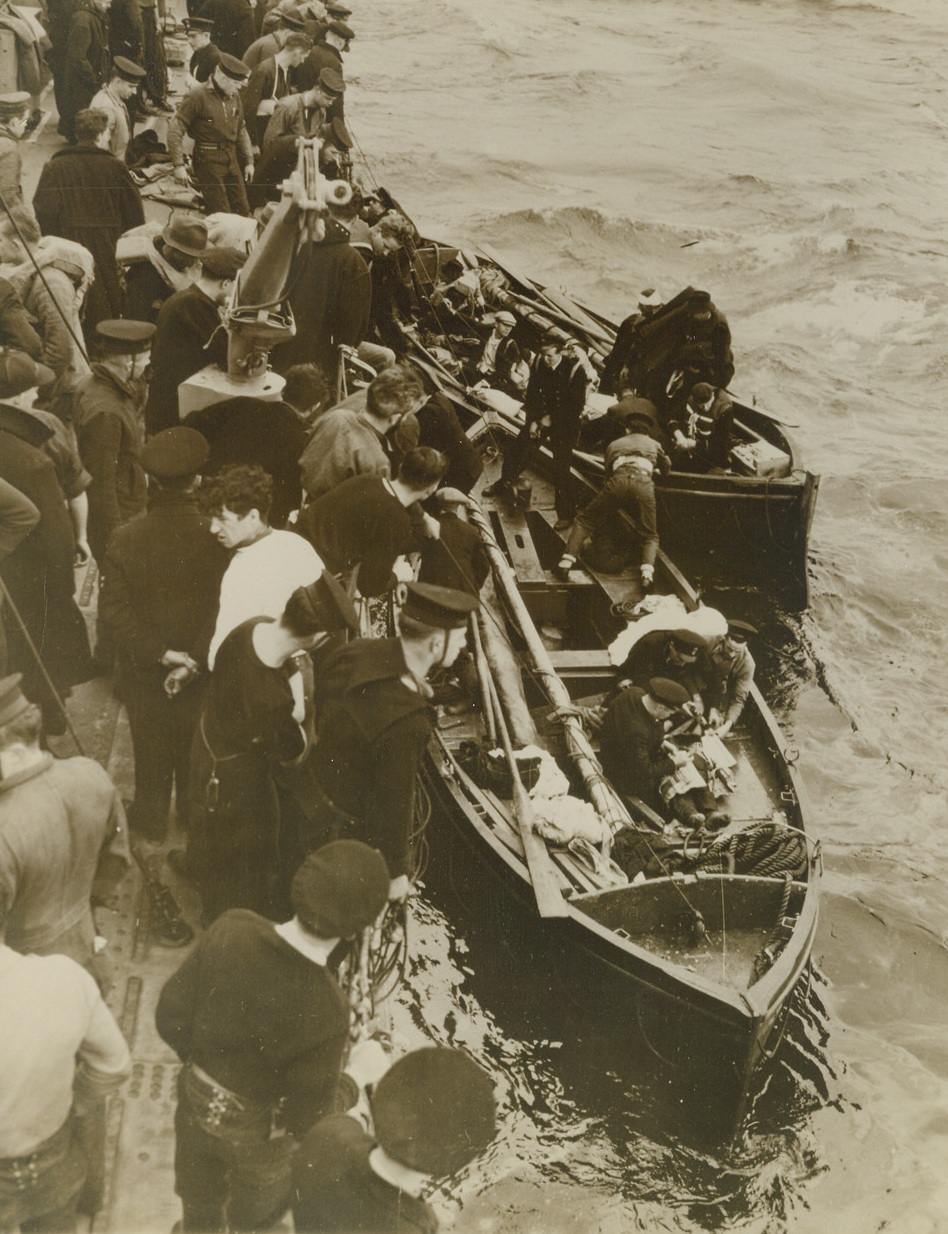 Rescue’s End, 11/14/1940 England – Survivors of a torpedoed British Merchant Ship shown alongside a Canadian Destroyer, upon arrival at an unnamed English port. The ship’s surgeon and the crew members may be seen preparing injured for hoisting aboard while rescued survivors mingle with sailors on deck. The Canadian warship rescue survivors. Credit: ACME; 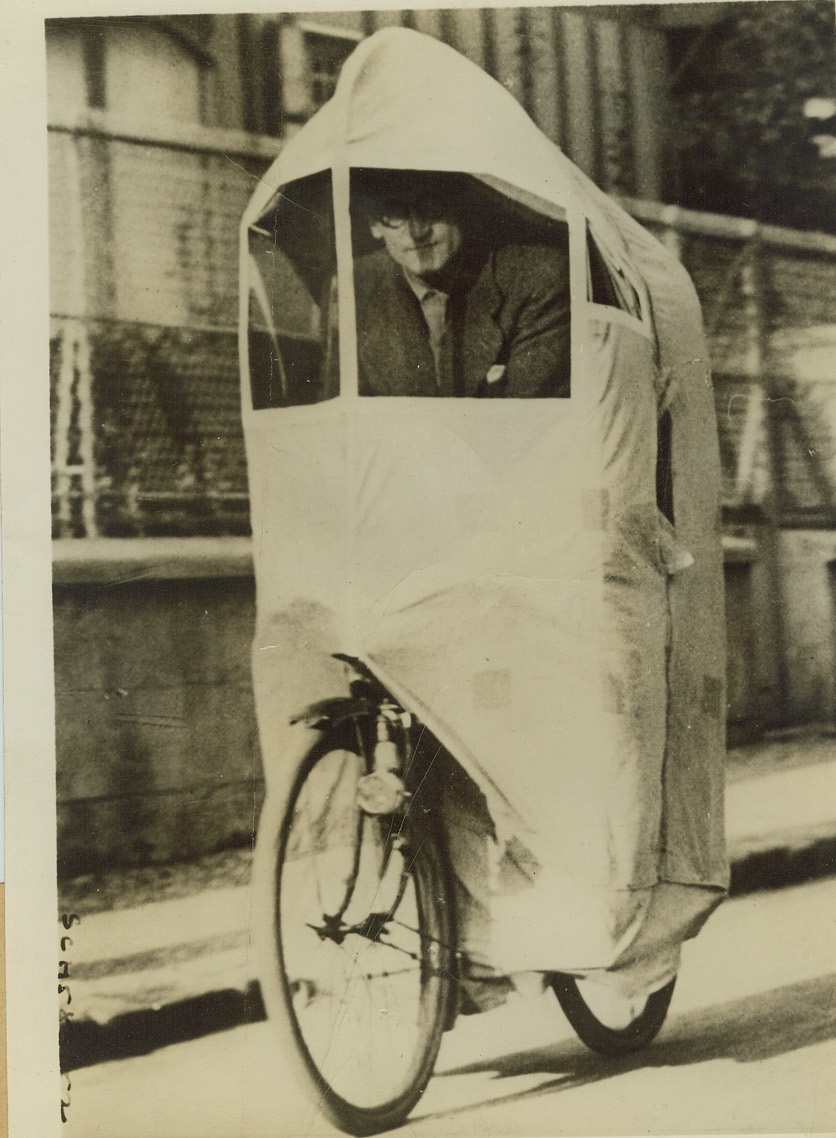 Occupation Taxes French Ingenuity, 11/25/1940 PARIS -- Shortage of fuel in Paris has worked many changes in living, working and travel habits since the German occupation. Faced with the prospect of having to use his bicycle through the winter, in rain or shine, this ingenious Frenchman constructed a shelter on it to protect him from the elements. Credit: (ACME); 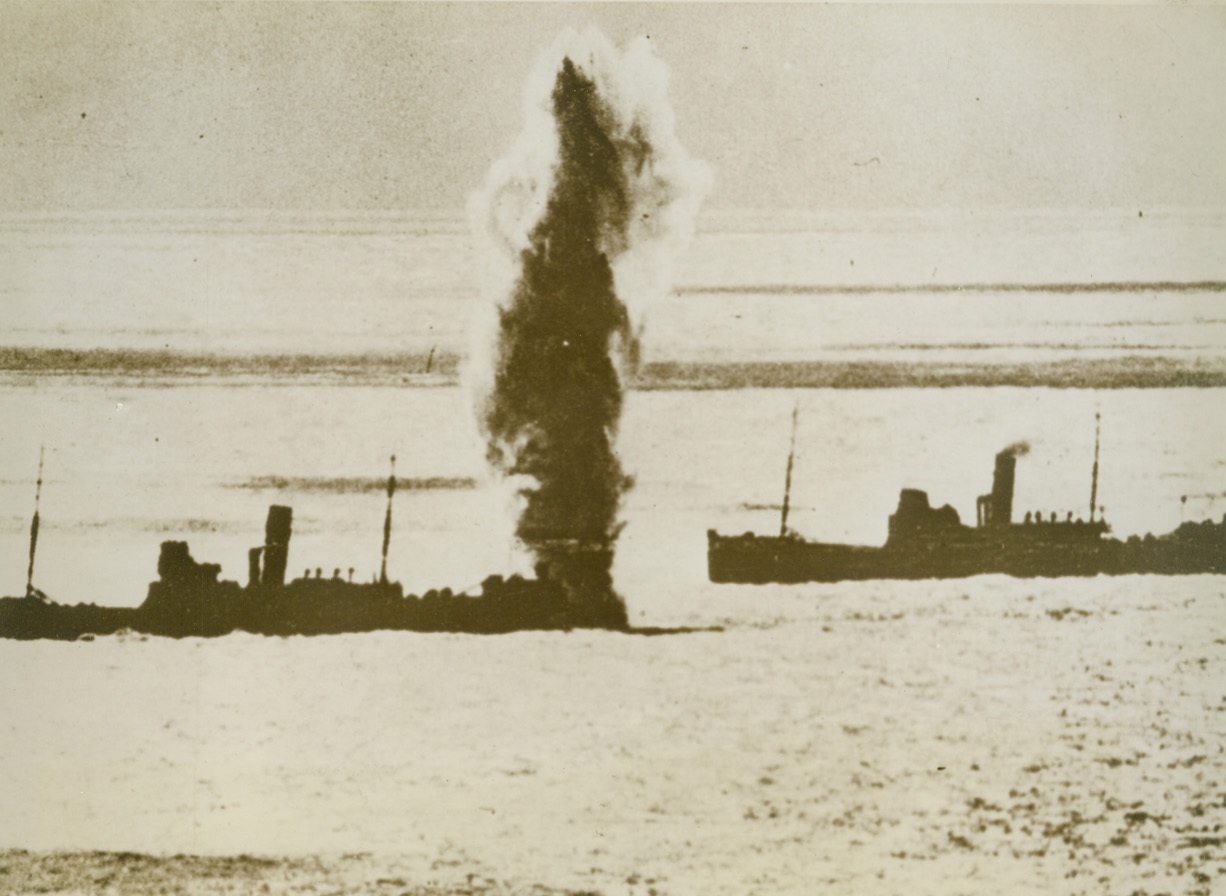 Nazi Channel Guns Bombard British Convoy, 11/25/1940 ENGLISH CHANNEL – Steaming under the noses of German coastal guns, one ship of an English convoy barely escapes destructing when a shell misses it by only a few feet. Germans claim to have destroyed part of this convoy, driving the remainder back to port. Credit: (ACME); 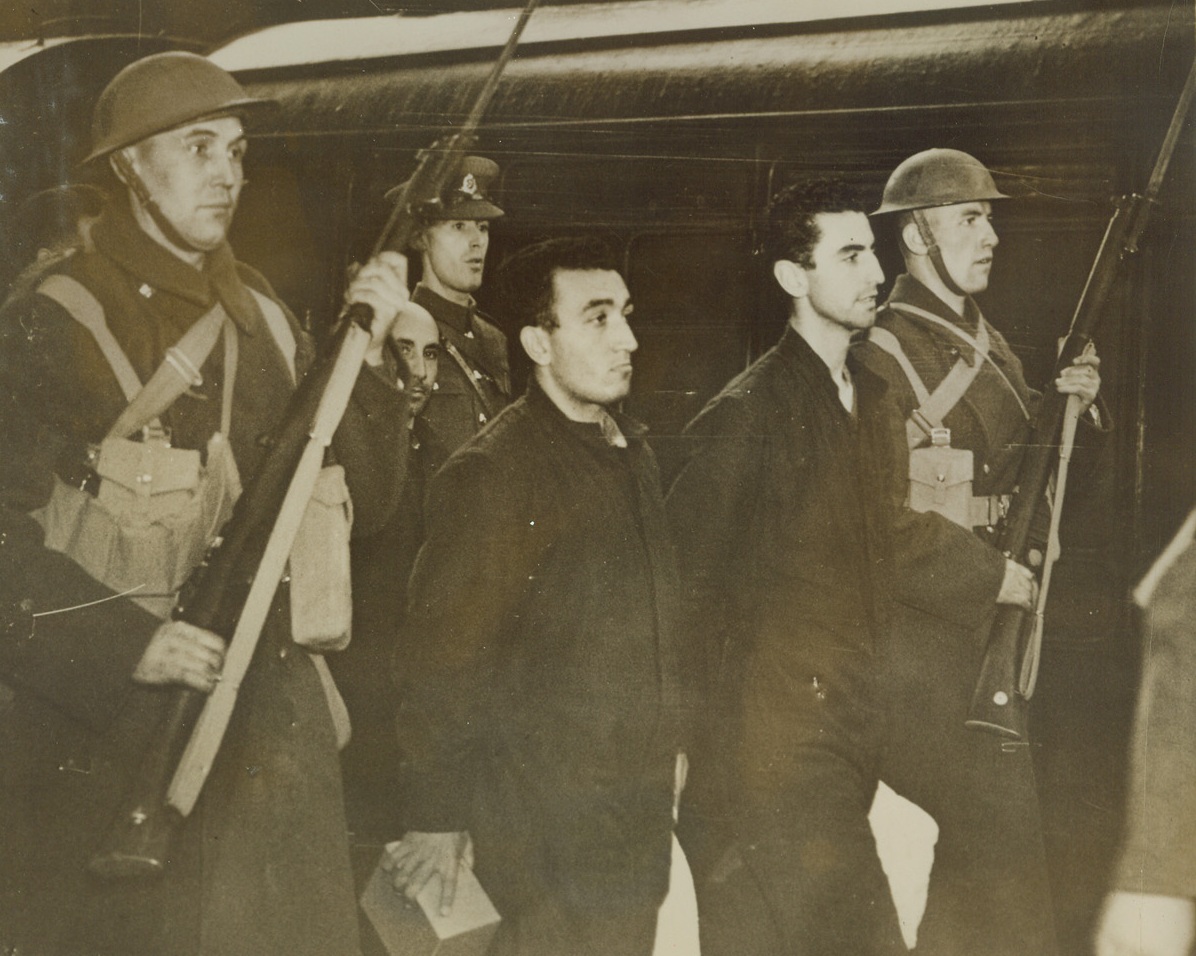 First Italian Submarine Prisoners in England, 11/26/1940 LONDON, ENGLAND—A study of two of the Italian sailors of the first group of Italian submarine prisoners in England as they are taken to a train under an escort with fixed bayonets. Credit: ACME.; 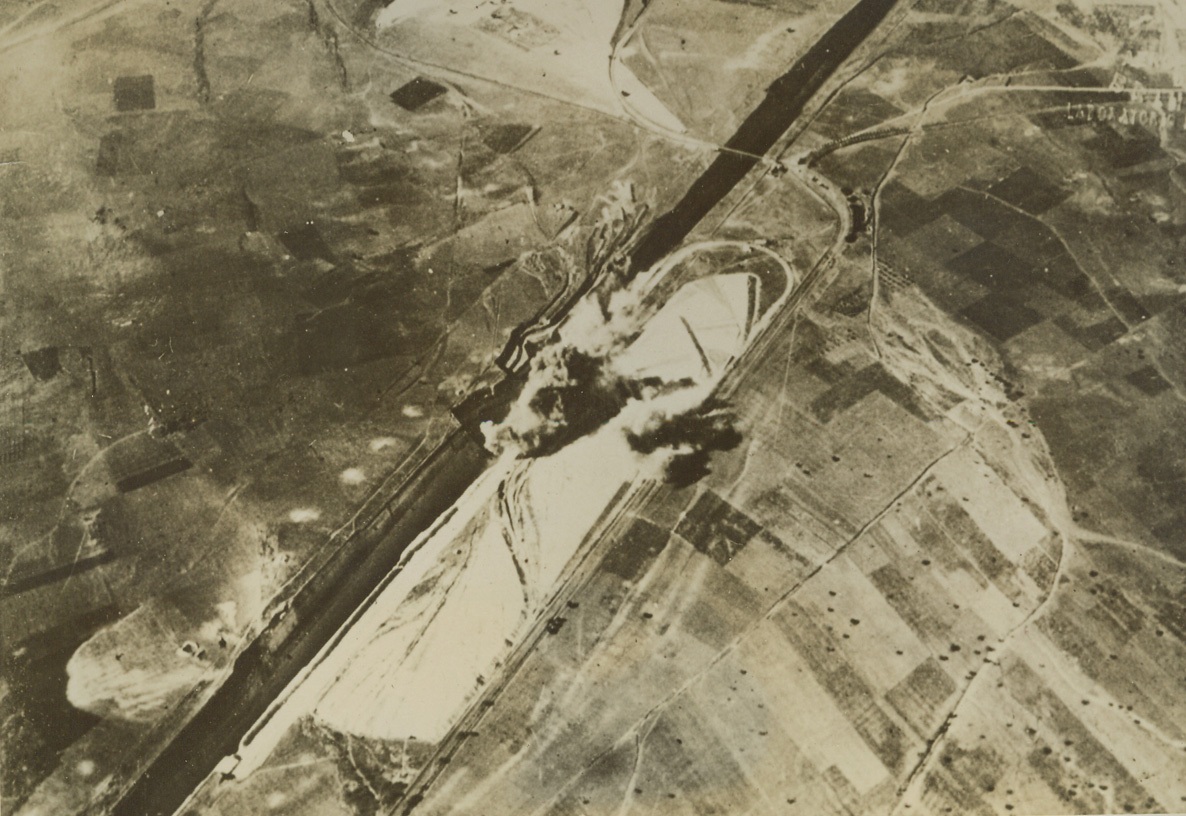 Bombing Greek Canal, 11/26/1940 This photo, released by the Italian Air Ministry, purports to show the explosion of an Italian bomb dropped by a plane flying over the famous Corinth Canal in Greece. Credit: ACME.;