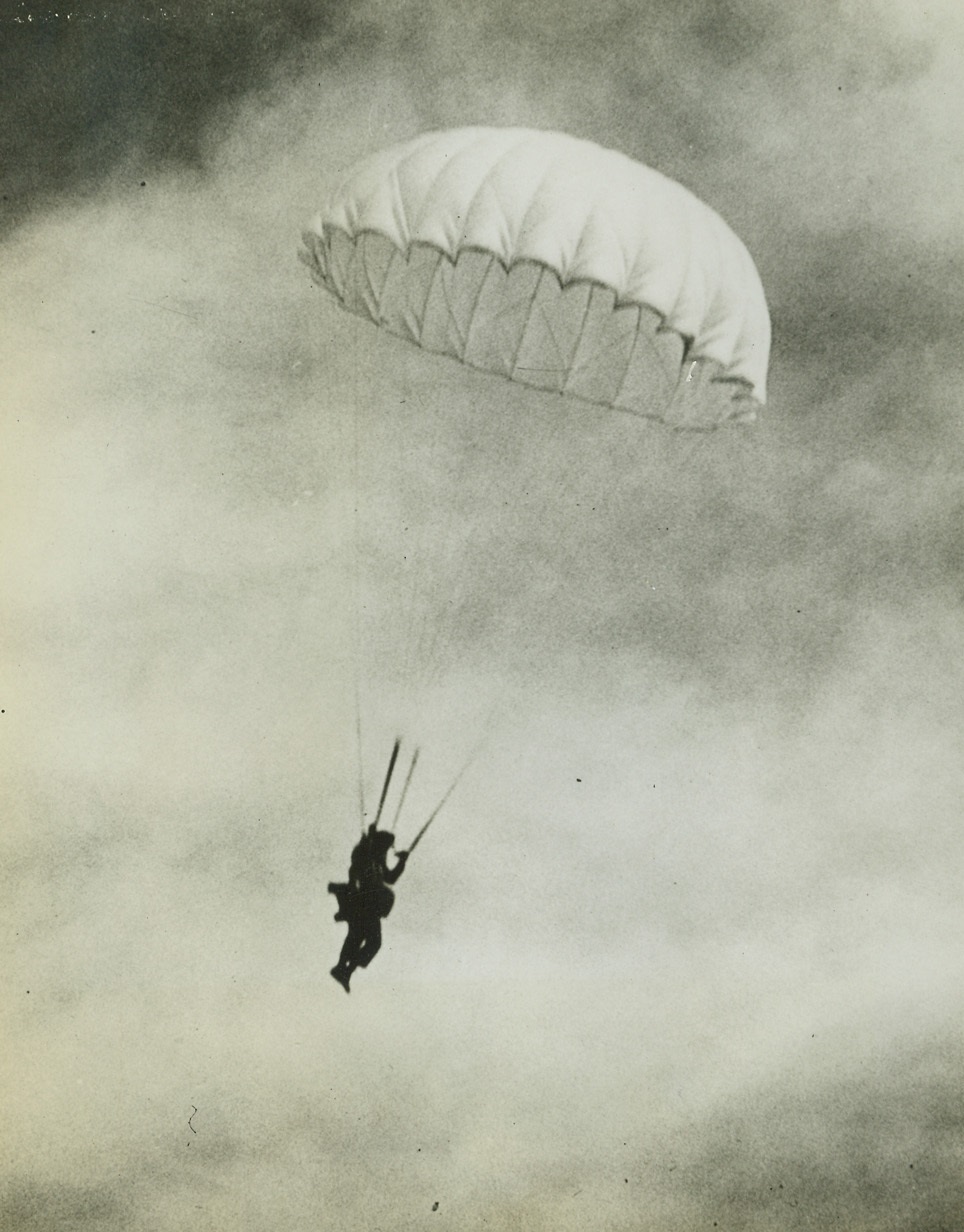 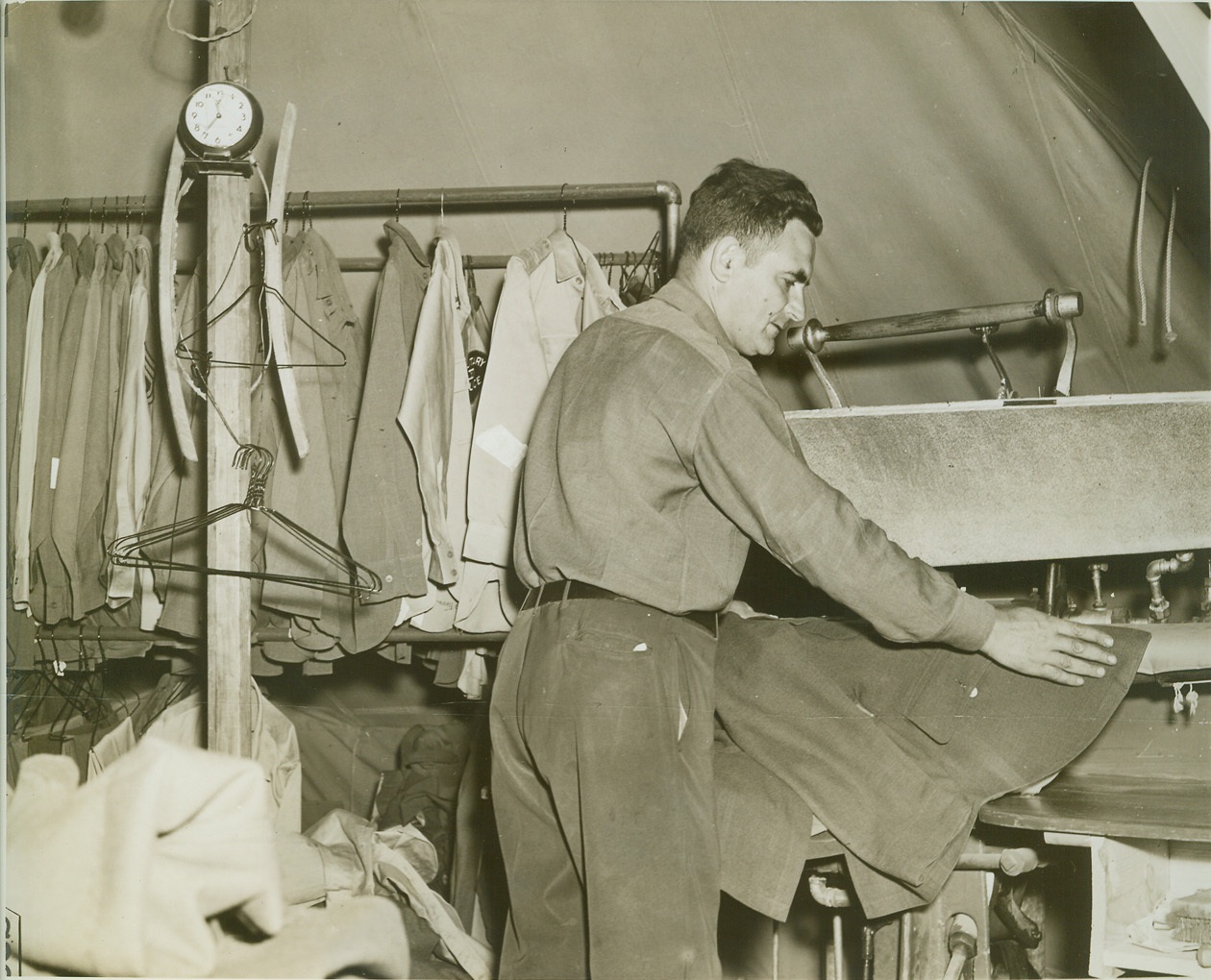 FIELD TAILOR SHOP MANESS, N.C. 10/26/1941.– Irving Levinson, a tailor by trade, keeps in trim caring for special troops of the 26th Division. His new shop is a tent in the camp area. Here, the New Yorker does some pressing. A kerosene fired steam boiler operates the presser. Credit: OWI Radiophoto from ACME 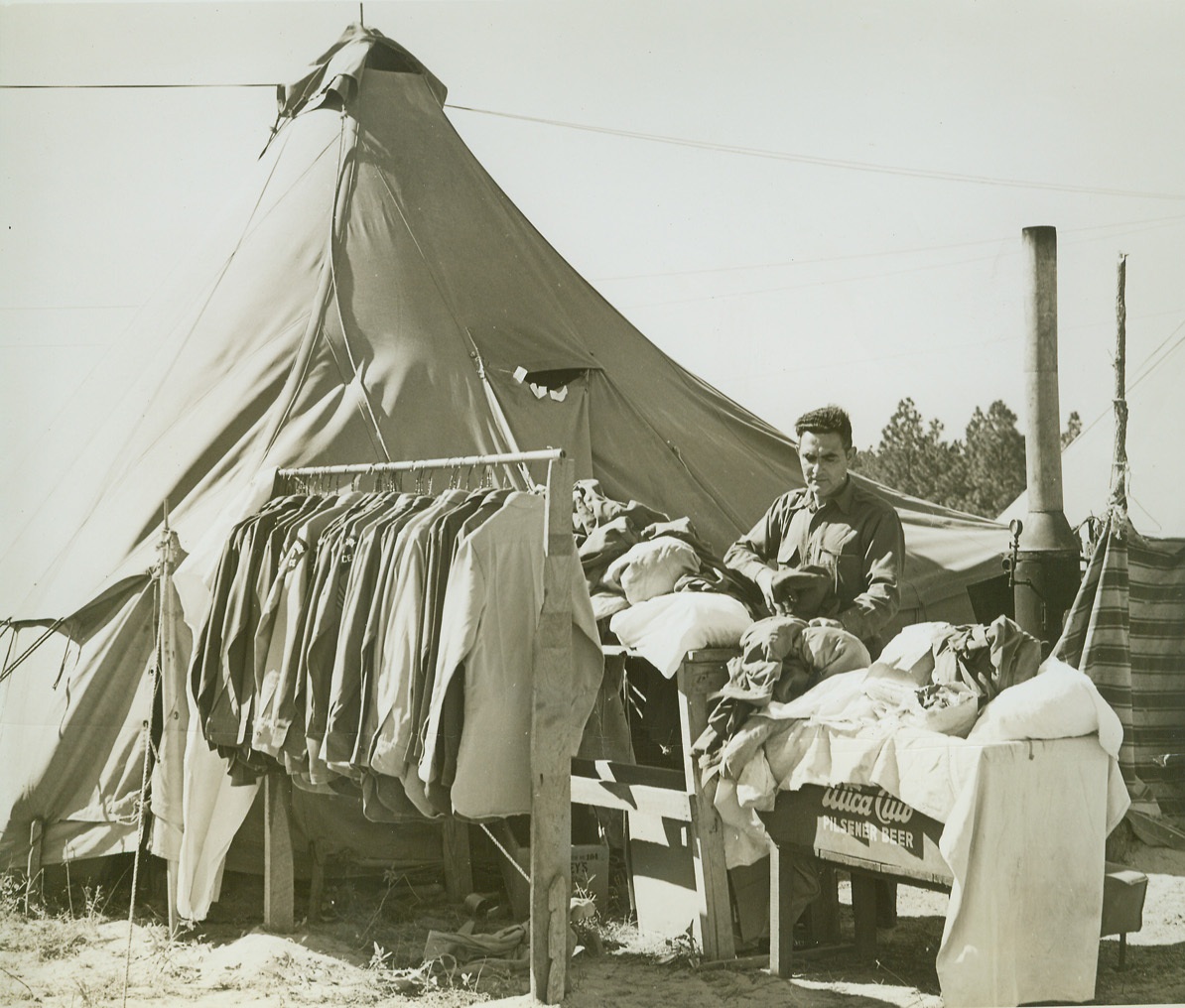 FIELD TAILOR SHOP MANESS, 10/26/1941. N.C. – Irving Levinson of New York, who has just put out a rack of freshly pressed uniforms for special troops of the 26th Division, goes to work assorting a new batch of laundry and uniforms. A civilian tailor, Levinson’s shop is now a tent in the camp area. In background right is the kerosene fired steam boiler for pressing. Credit: OWI Radiophoto from ACME 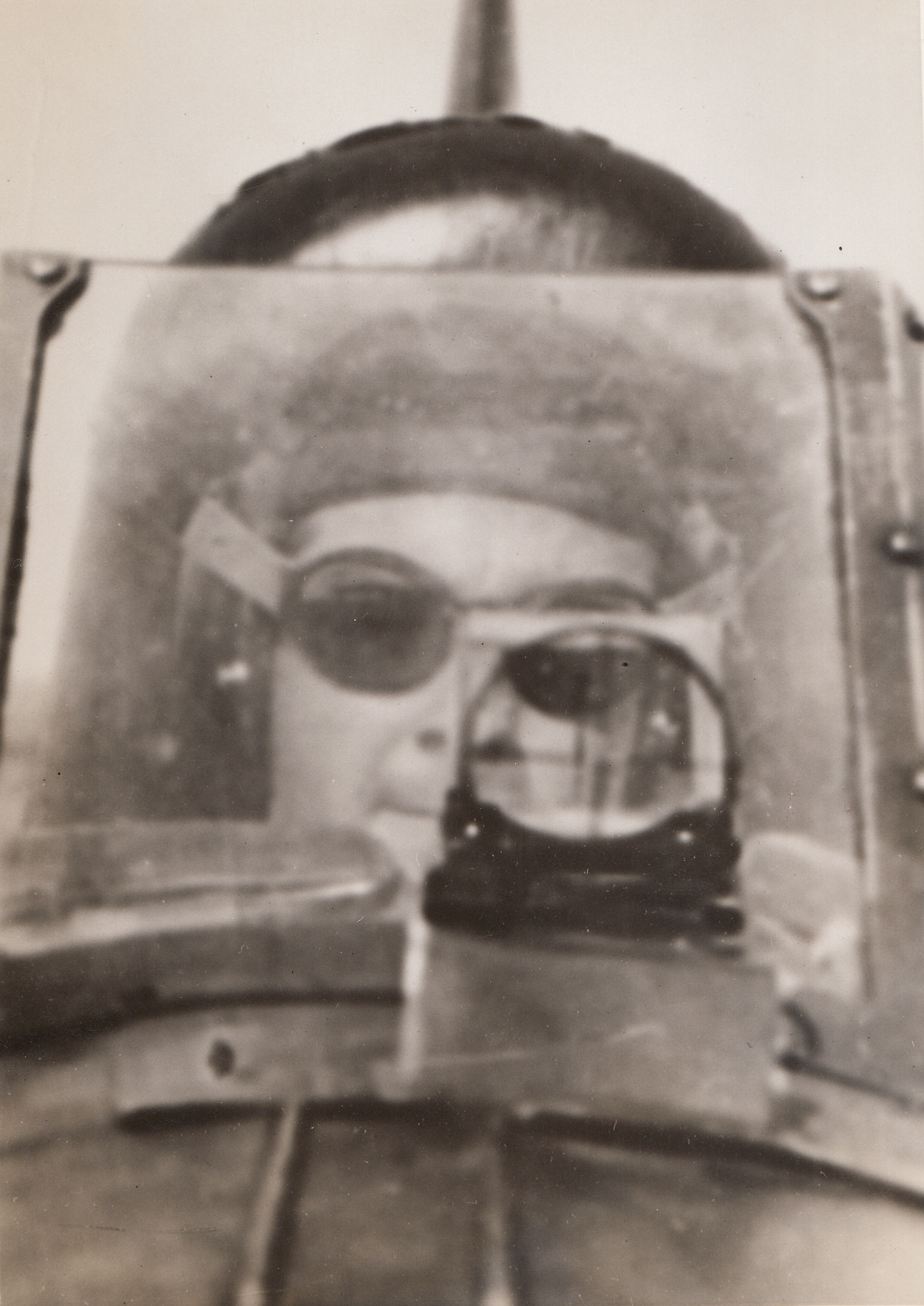 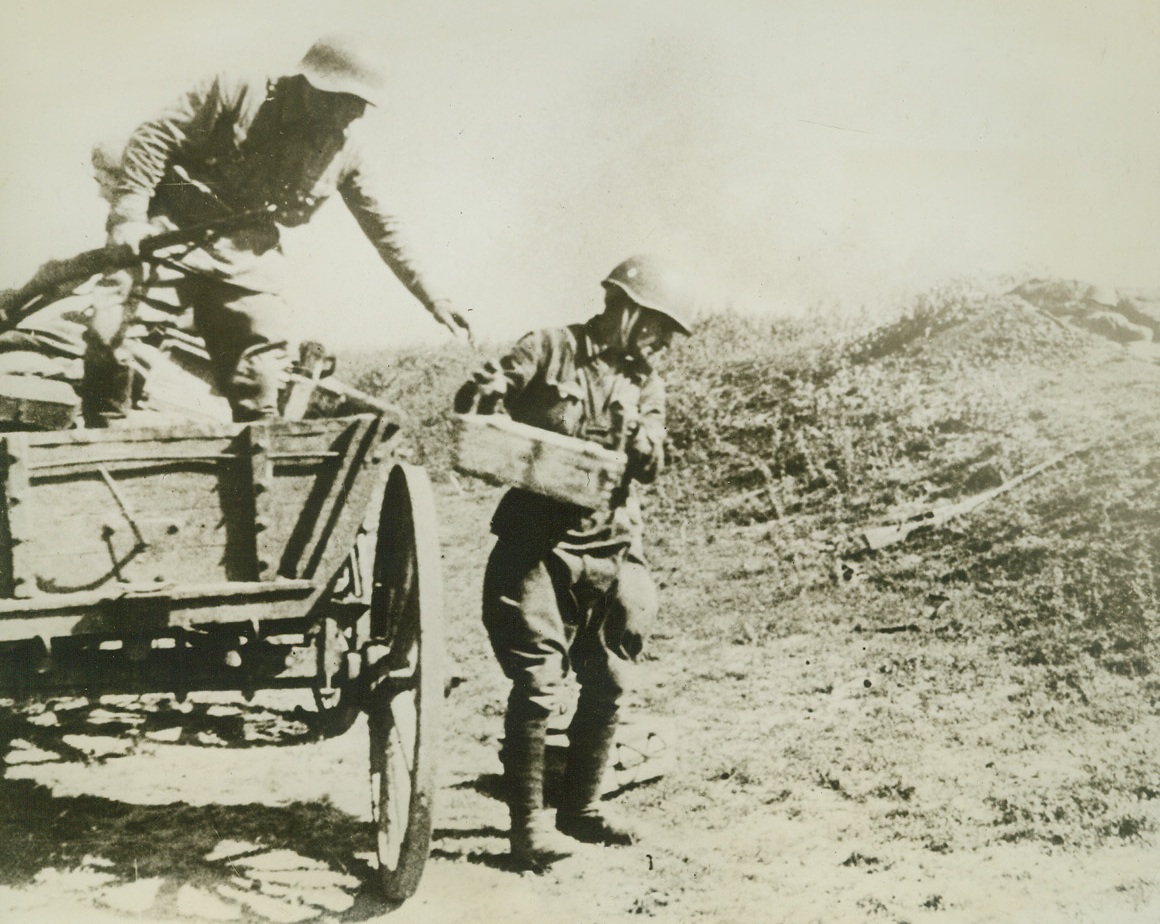 Ammunition for the Soviet Front, 10/24/41 RUSSIA—Even peasant carts are requisitioned if no lorries are immediately available, so that Soviet infantry in the firing line can get ammunition they need. Here are two Red Army soldiers delivering rifle ammunition and grenades to a forward position. Note the well-protected, camouflaged firing post beside the rough road. Passed by British censor. Credit: ACME; 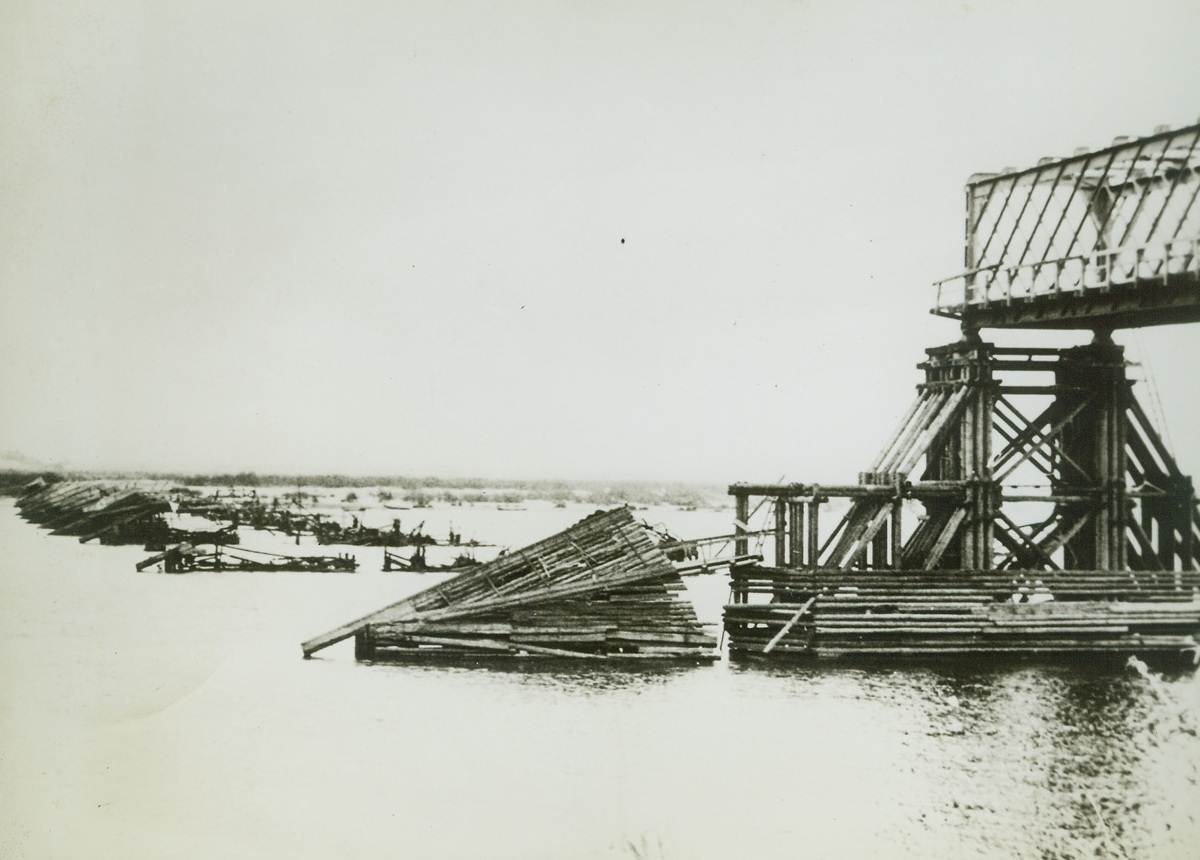 Calm “After” the Storm, 10/24/41 RUSSIA—All was calm when German forces arrived at this scene on the Dneiper River at Strassolessnje. Retreating Soviet forces destroyed the bridge to slow up the Nazi advance. Passed by German censor.Credit: ACME; 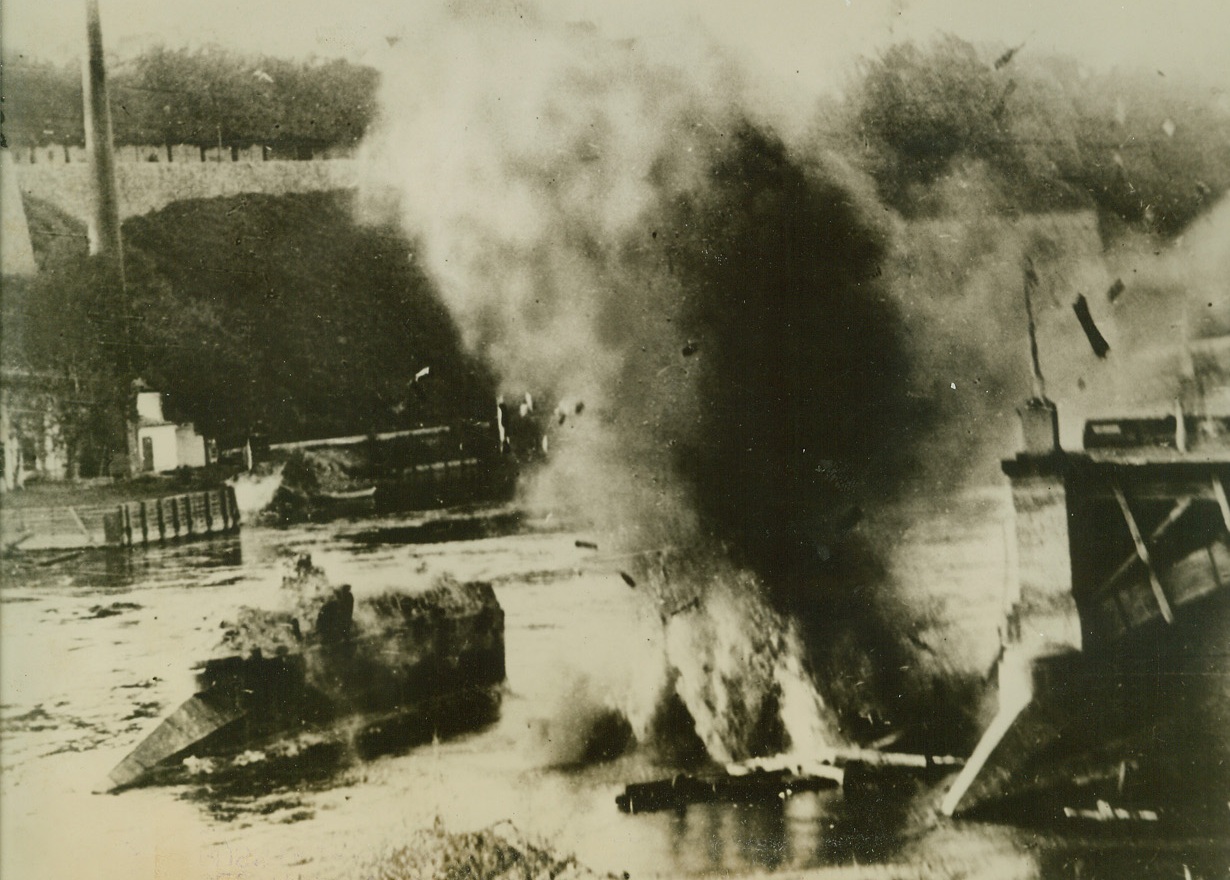 Destroying to Repair, 10/24/41 Russia—German engineers caused this geyser when they blasted a piece of bridge framework as they went to work repairing a destroyed bridge across the Narva River. The bridge was blasted by retreating Red Army troops to stop the advance of the Germans. (Passed by German censor). Credit: ACME.; 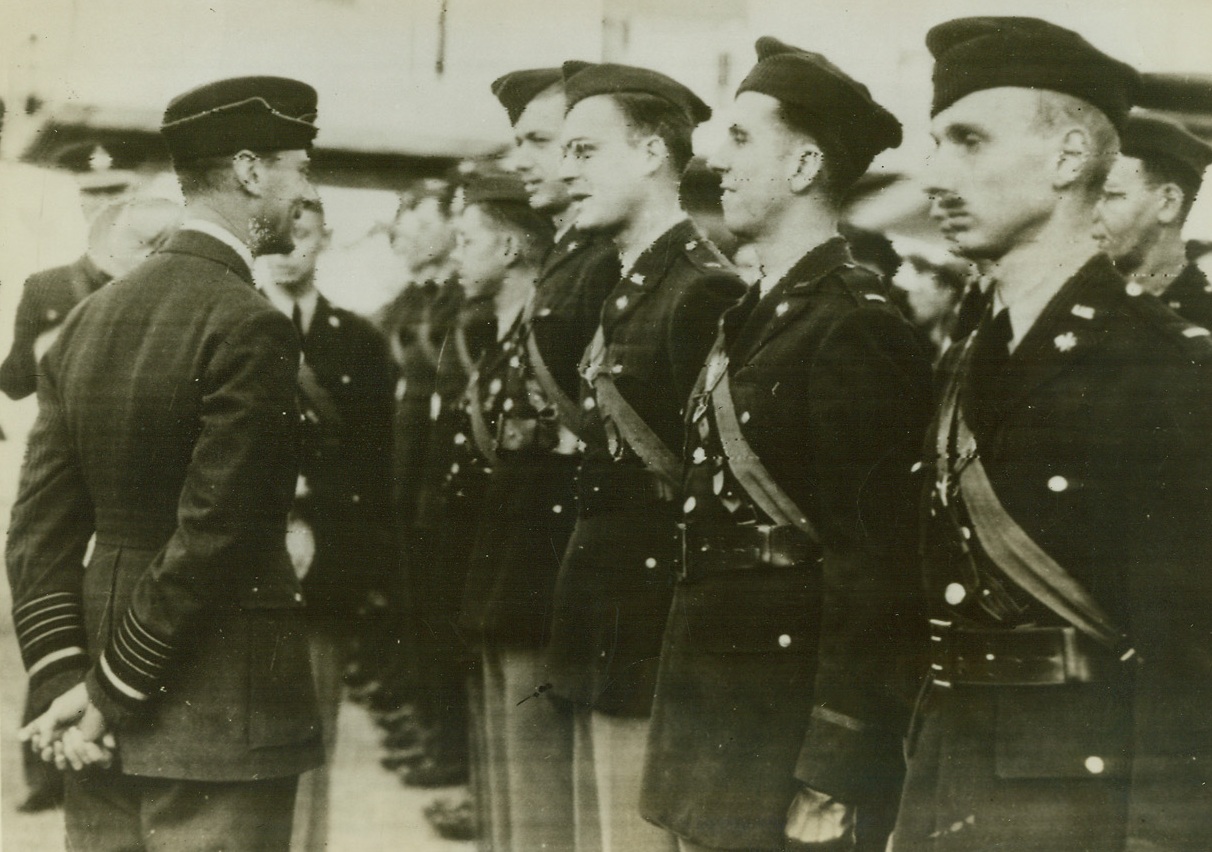 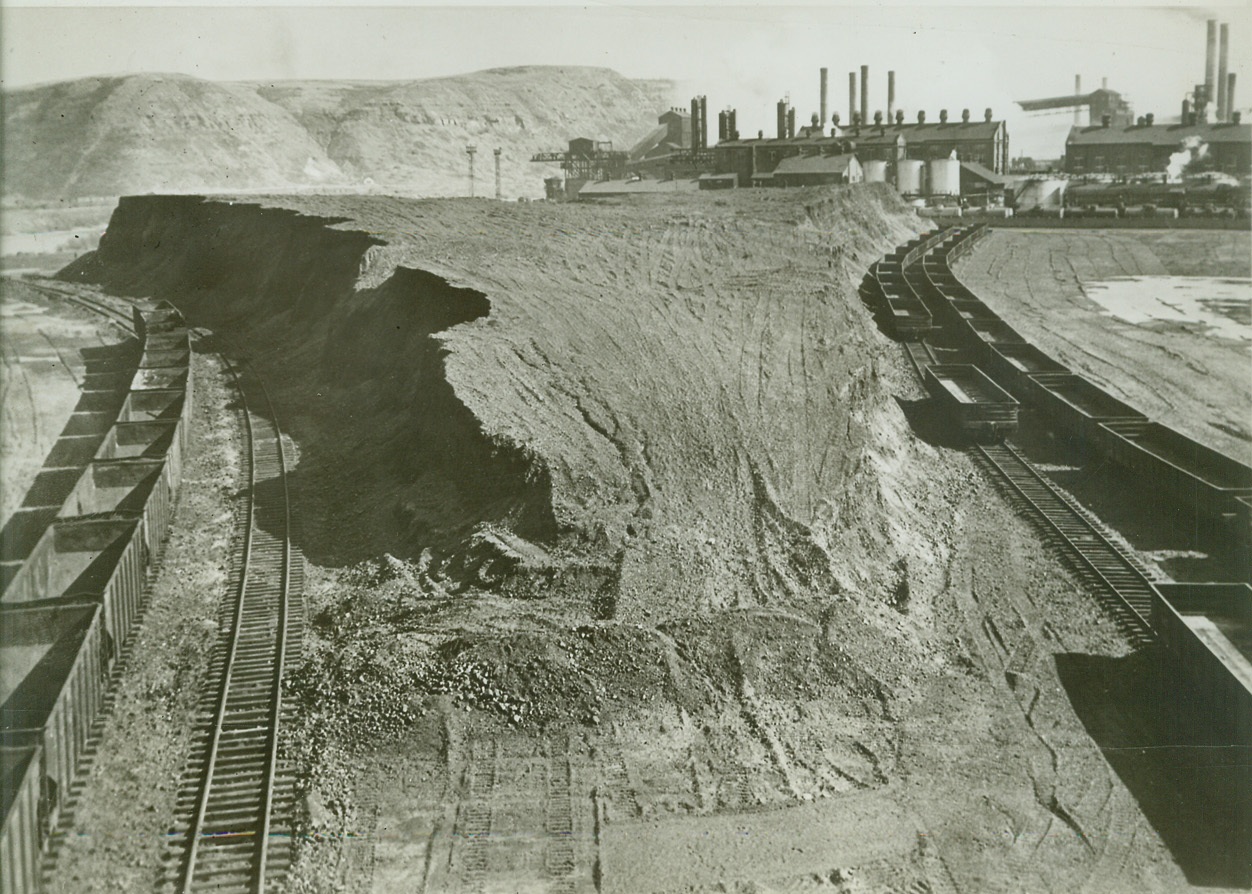 CAPTIVE MINE STRIKE THREATENS STEEL OUTPUT, 10/27/41 CLAIRTON, PA – This pile of coal at the Clairton, Pa., works of the Carnegie-Illinois Steel Corporation looks big, but it will last only two weeks at capacity operation, and prospects of replenishing it are dim as 53,000 miners at pits owned by steel companies stage walkout to enforce C10 demand for a closed shop. Credit: OWI Radiophoto from ACME; 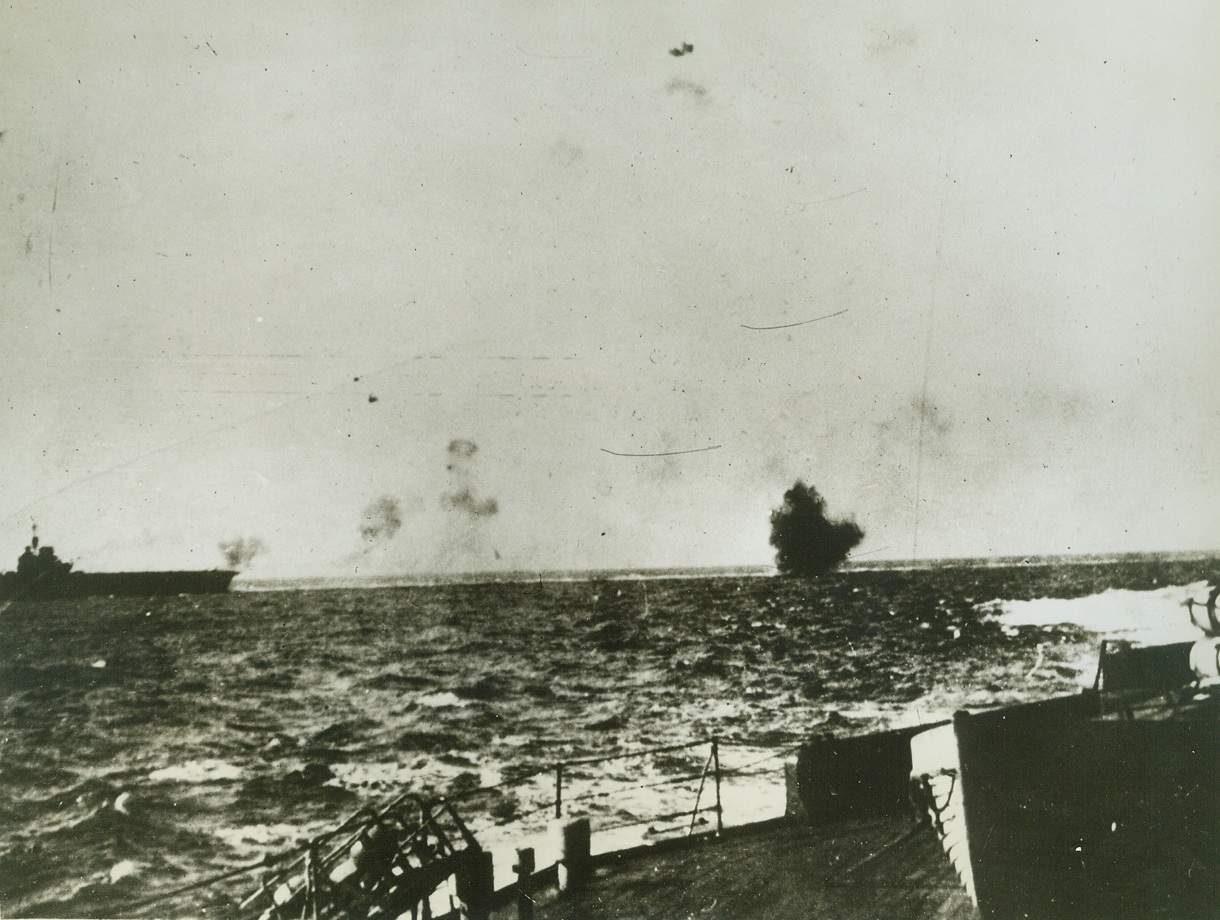 BOMBING OF HMS ILLUSTRIOUS IN MEDITERRANEAN, #1, 10/27/41 MEDITERRANEAN—This is the start of German dive-bombing attack on the British aircraft carrier Illustrious, which was the main target of six air attacks in the Mediterranean, suffering several hits. This exclusive picture is the first of a sequence of three, received today by clipper, passed by British censor. The vessel is now undergoing repairs in an American port. Credit: Acme; 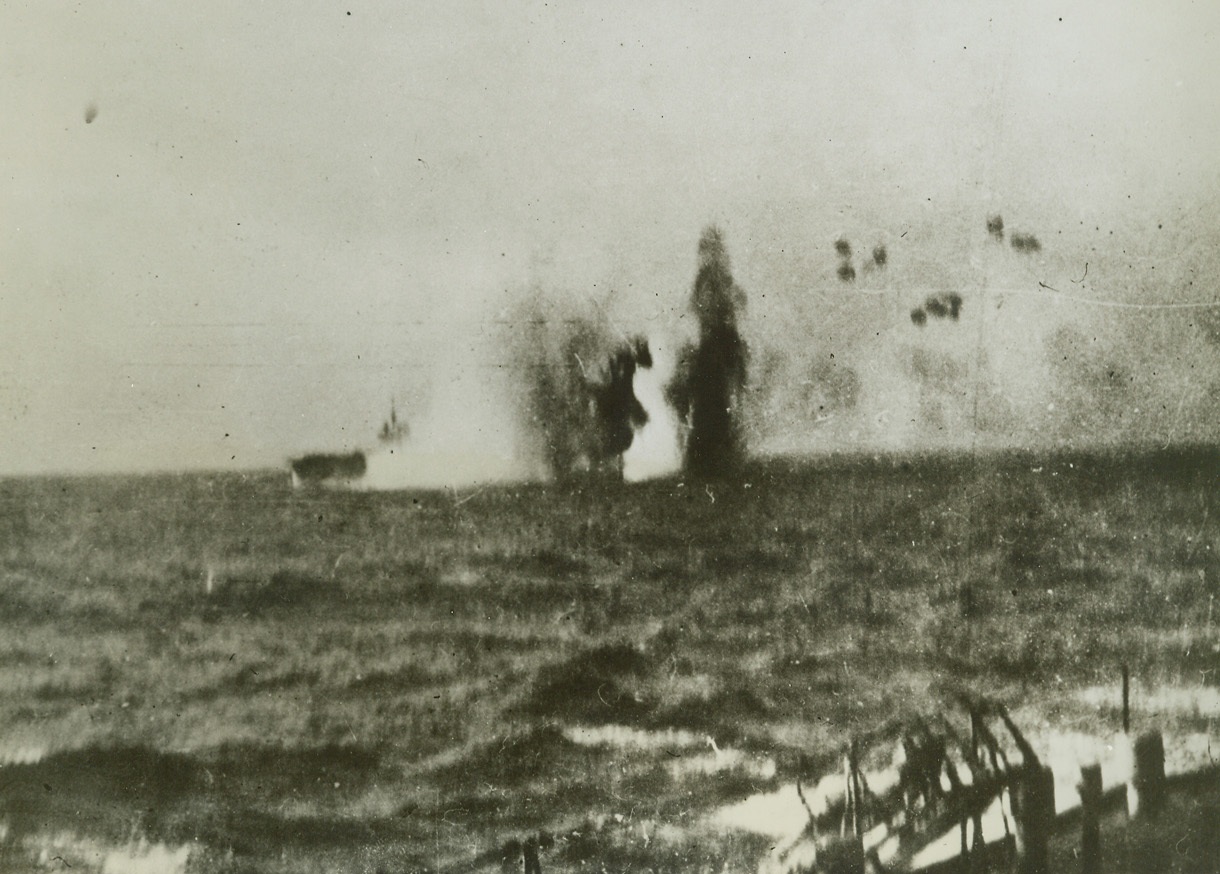 BOMBING OF HMS ILLUSTRIOUS IN MEDITERRANEAN, #3, 10/27/41 MEDITERRANEAN—The British aircraft carrier Illustrious is almost hidden by spray and smoke from bomb bursts during savage German dive-bombing attack in the Mediterranean. The Illustrious, which made its way to an American shipyard, where it is now undergoing repairs, was the main target of six Nazi attacks by dive bombers. This is the last of three exclusive pictures received today by clipper, passed by British censor. Credit: Acme; 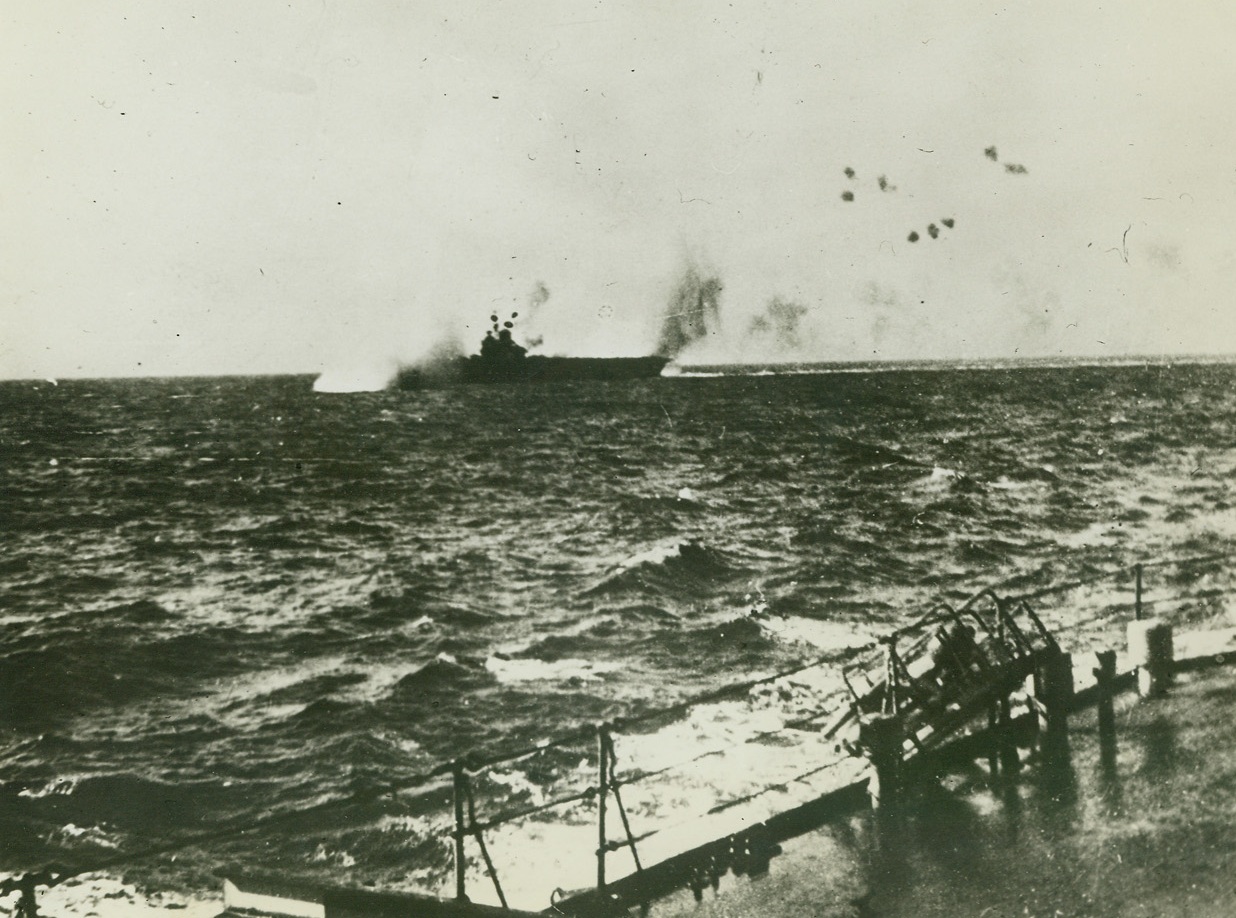 Bombing Of HMS Illustrious In Mediterranean (2), 10/27/41 Mediterranean – German Dive Bombers begin to find their range and hits are scored on the British Aircraft Carrier Illustrious, which was their main target during six attacks in the Mediterranean. The vessel made its way to an American port, where it is undergoing repairs. This exclusive picture is the second of a sequence of three, received by clipper today, passed by British Censor. Credit: ACME; 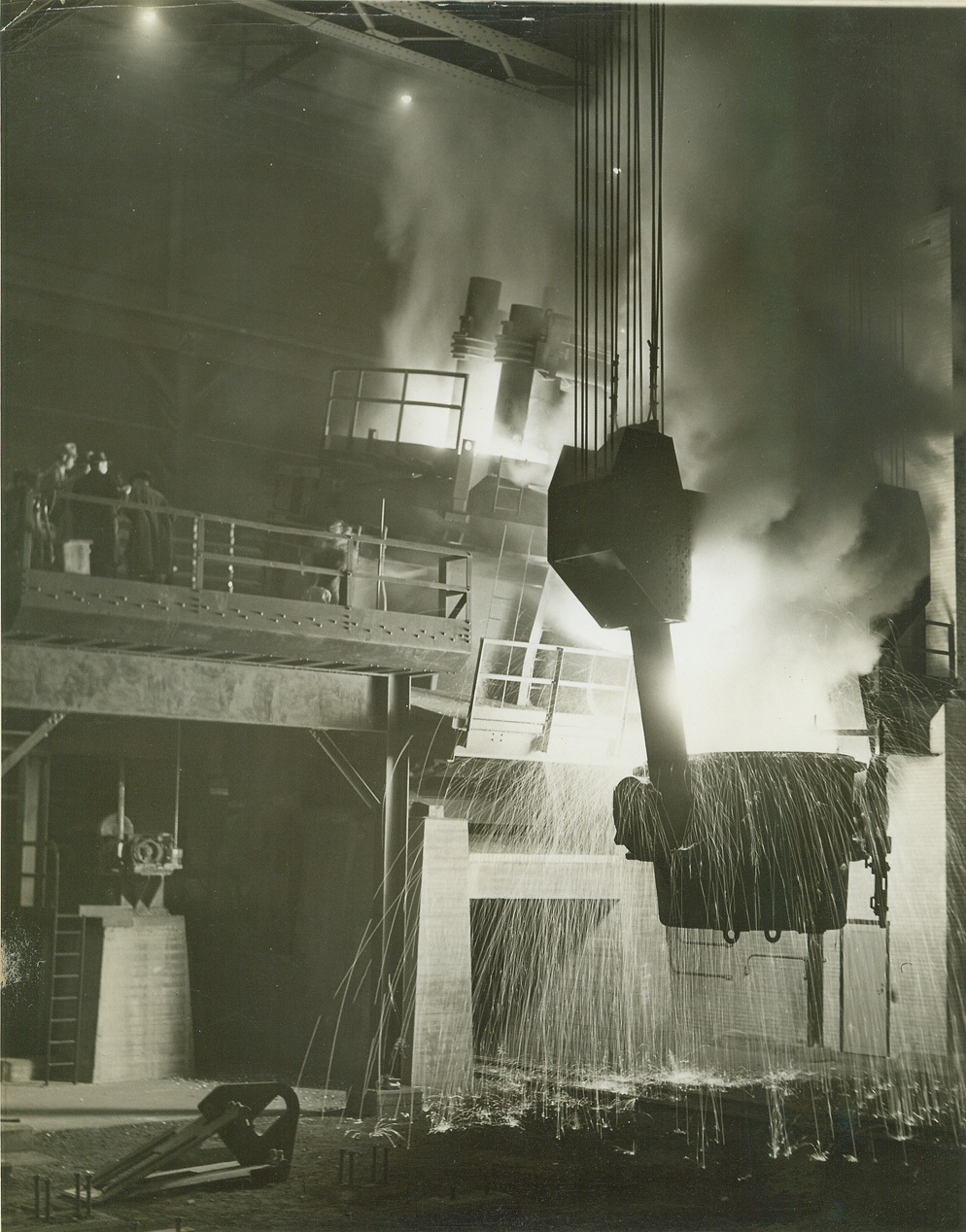 BIGGEST PRODUCER DOUBLES STAINLESS STEEL OUTPUT, 10/28/41 CHICAGO, IL—Maj. General Joseph Cummins, Commanding of the Sixth Corps area, and other defense officials (on the platform at left) watch the first pouring from one of two new electric furnaces installed in the corporation. Their output of 100,000 net tons annually doubles the previous output, and makes the plant the greatest producer of stainless steel in the United States. In the glare above the furnace (upper center) can be seen the giant electrodes that produce the intense heat necessary in making the alloy. Credit: OWI Radiophoto from ACME; 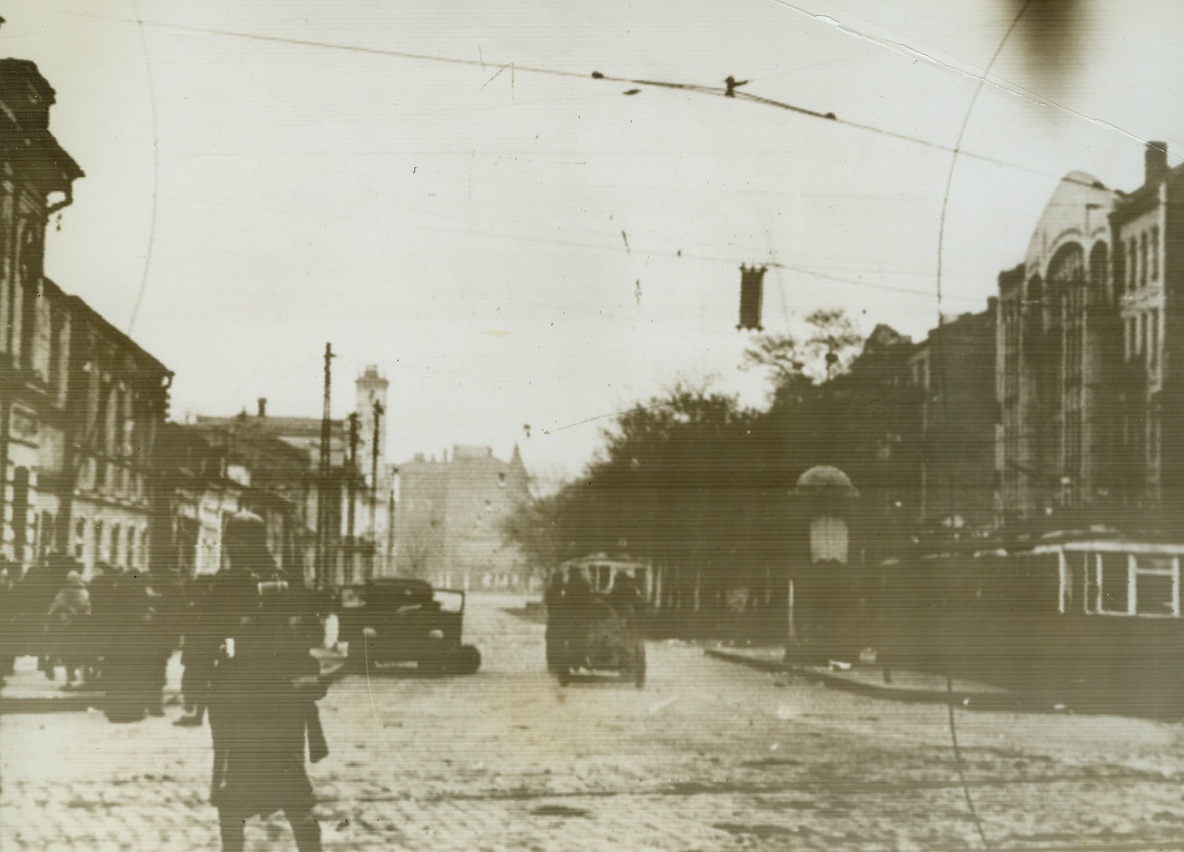 Germans Enter Kharov, 10/28/41 Another Russian city into which Germany’s military machine has marched is Kharov, on the way to the highly desirable Donets Basin. No cheering crowd greeted the conquerors. No visible damage to the city is apparent from this radiophoto, flashed from Berlin to New York today (October 28).Credit: Official German photo from ACME; 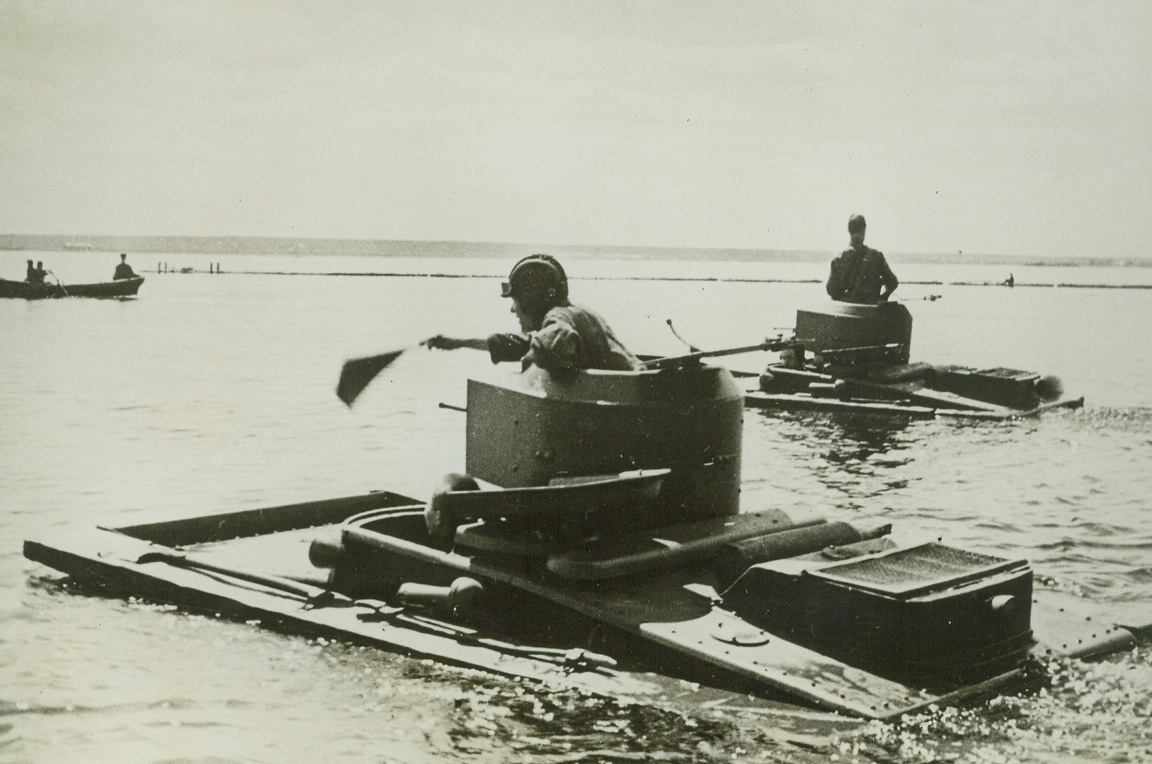 Red Army Land-Water Tanks, 10/29/41 RUSSIA—Soviet amphibian tanks make their way across a Russian river. Such scenes as this are now being enacted as the Russians defend their terrain against the German mighty advance and possible pincer movement. Credit: ACME; 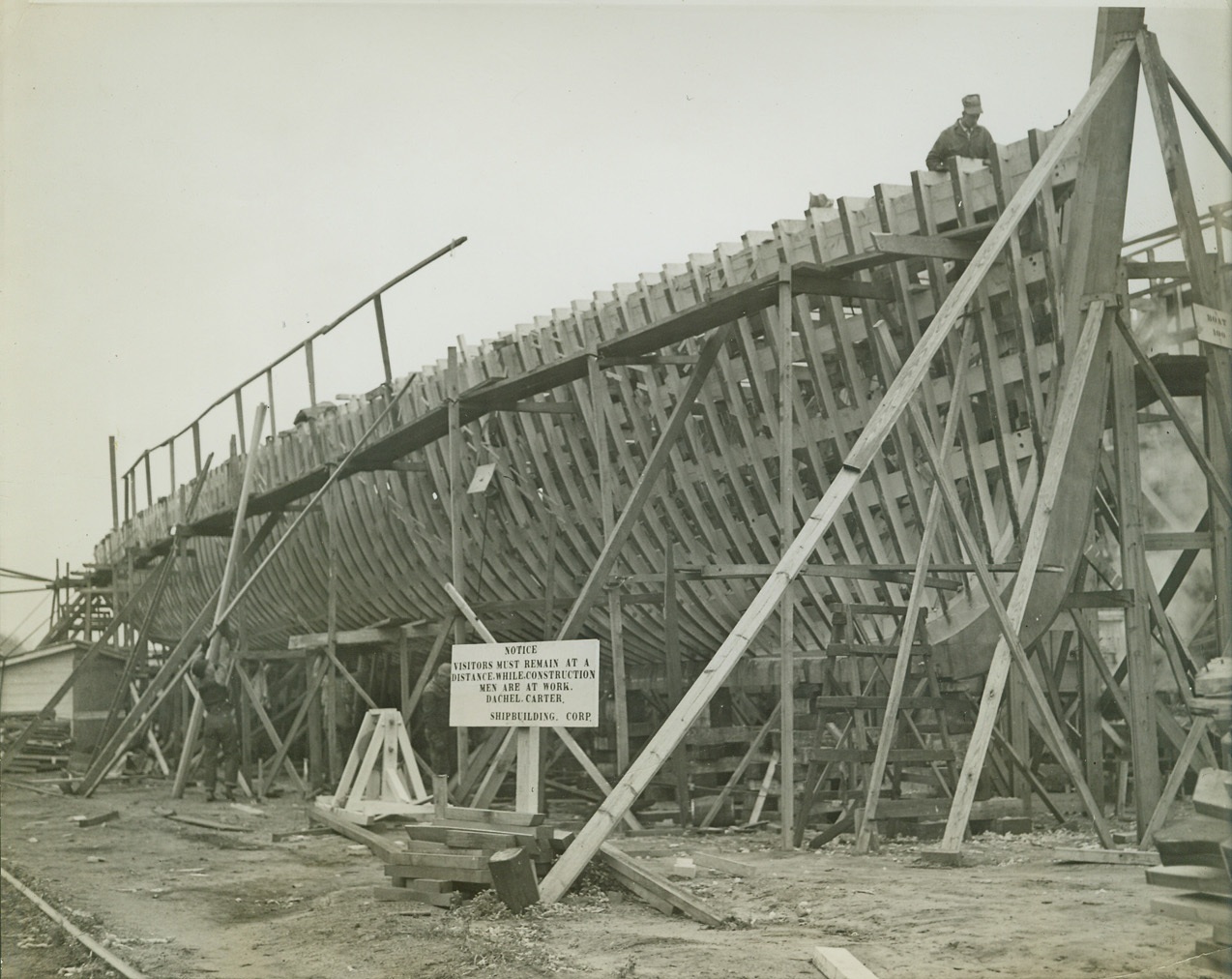 Milano Shipyards Get Defense Orders, 10/30/41 Benton Harbor, Mich.: One of many mine-sweepers under construction at the Dachel-Carter Shipbuilding Co. yards, here, is shown as it neared final stages, with framework finished. Large diesel engines will be installed in the completed boats. Credit: ACME.; 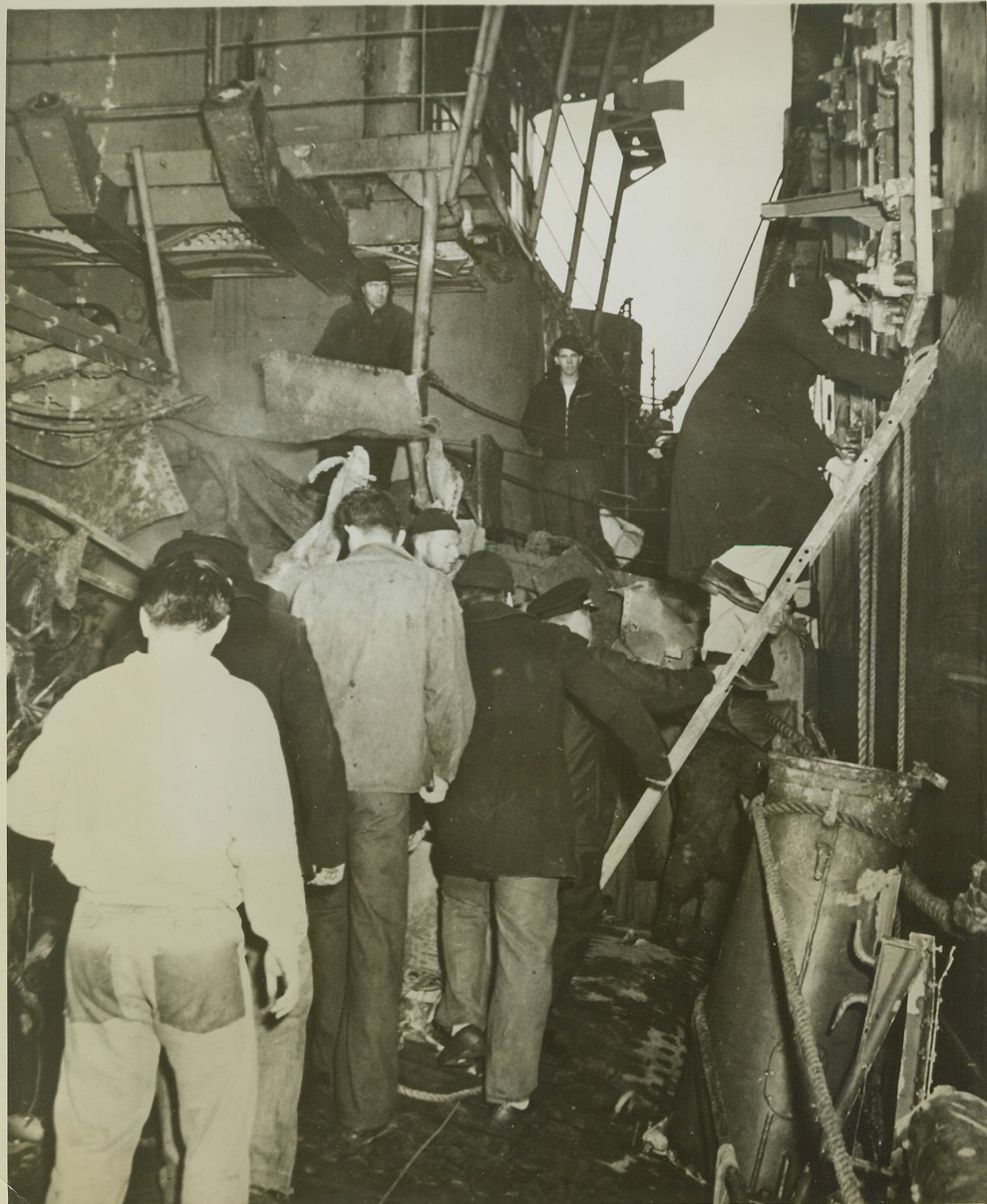 CREW MEMBERS LEAVE DISABLED KEARNY, 10/30/41 WASHINGTON, D.C. – Crew members of the U.S.S. Kearny take leave of their ship to board an accompanying vessel at an unnamed port. The Kearny was damaged by a torpedo while on patrol southwest of Iceland, but was able to limp into port. Credit: OWI Radiophoto from ACME; 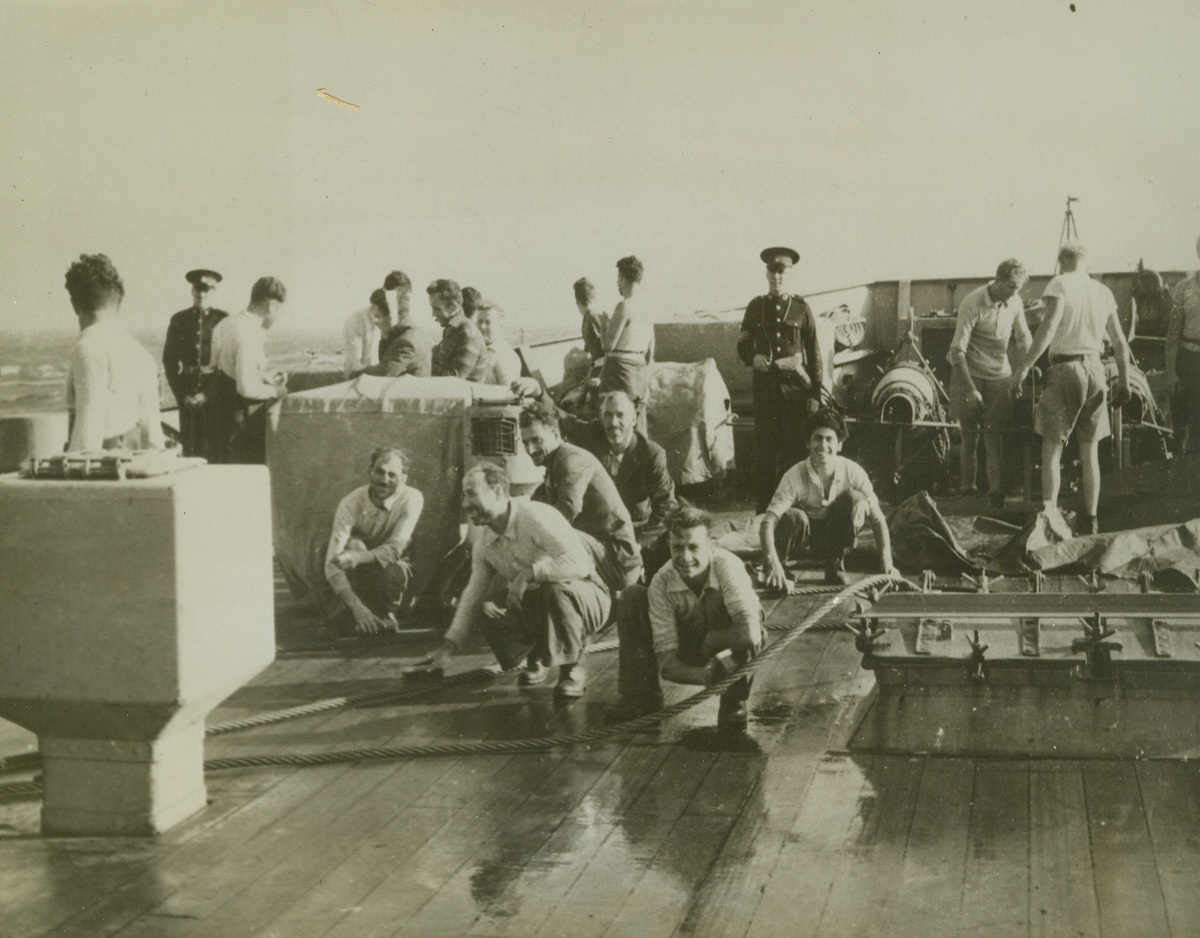 AXIS PRISONERS WORKING FOR HIS MAJESTY, 10/30/41 German and Italian prisoners captured from Axis submarines and merchant vessels are shown getting a workout on the upper deck of a British warship, scrubbing wire hawsers to earn their passage. The British-censored caption which accompanied the photo said that the prisoners look forward to this work and admitted that they do it well. Credit: Acme; 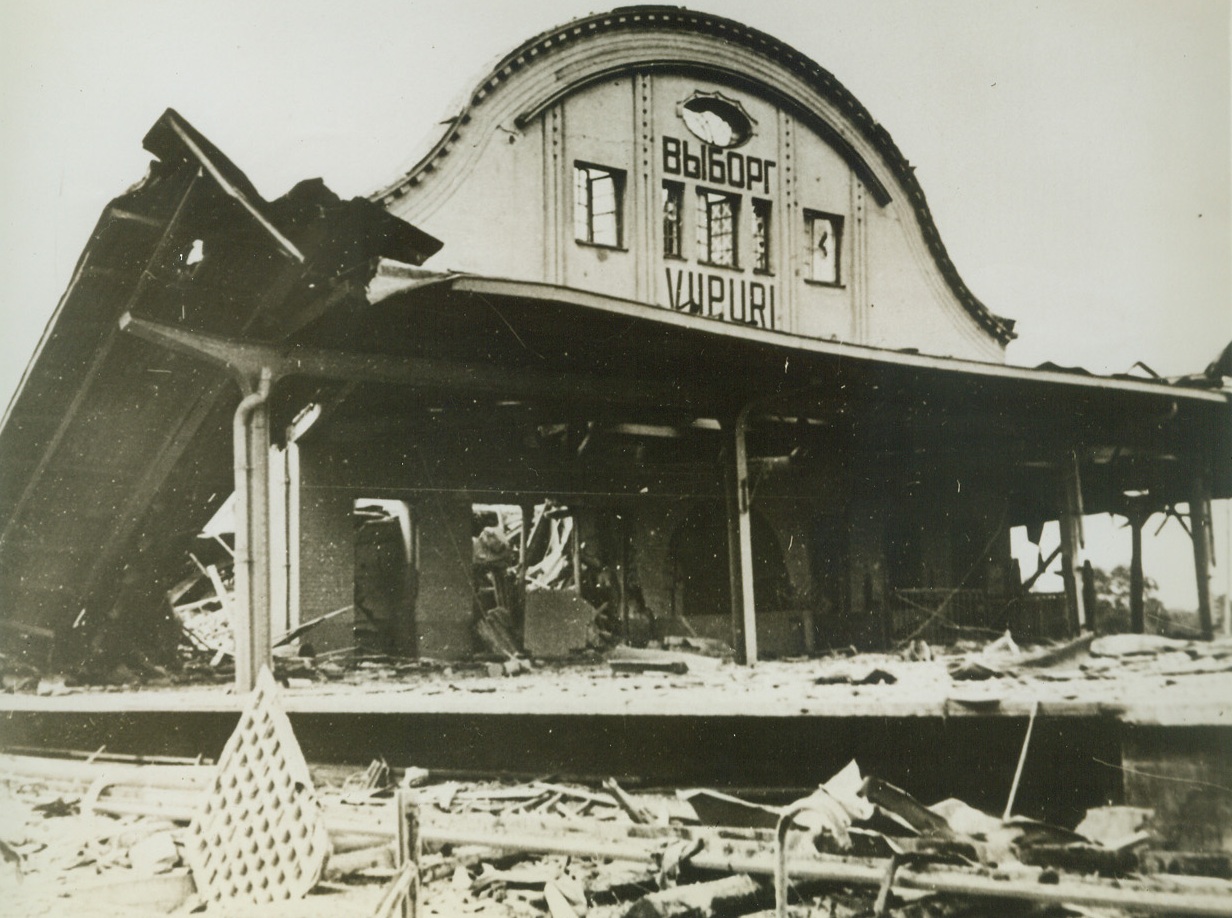 Russians Blow Up Own Railroad Station, 11/2/41 Russia – This is how the railroad station in Viipuri looked to an official German photographer after it was blown-up by retreating Red Army. (Passed by German Censor). Credit: ACME; 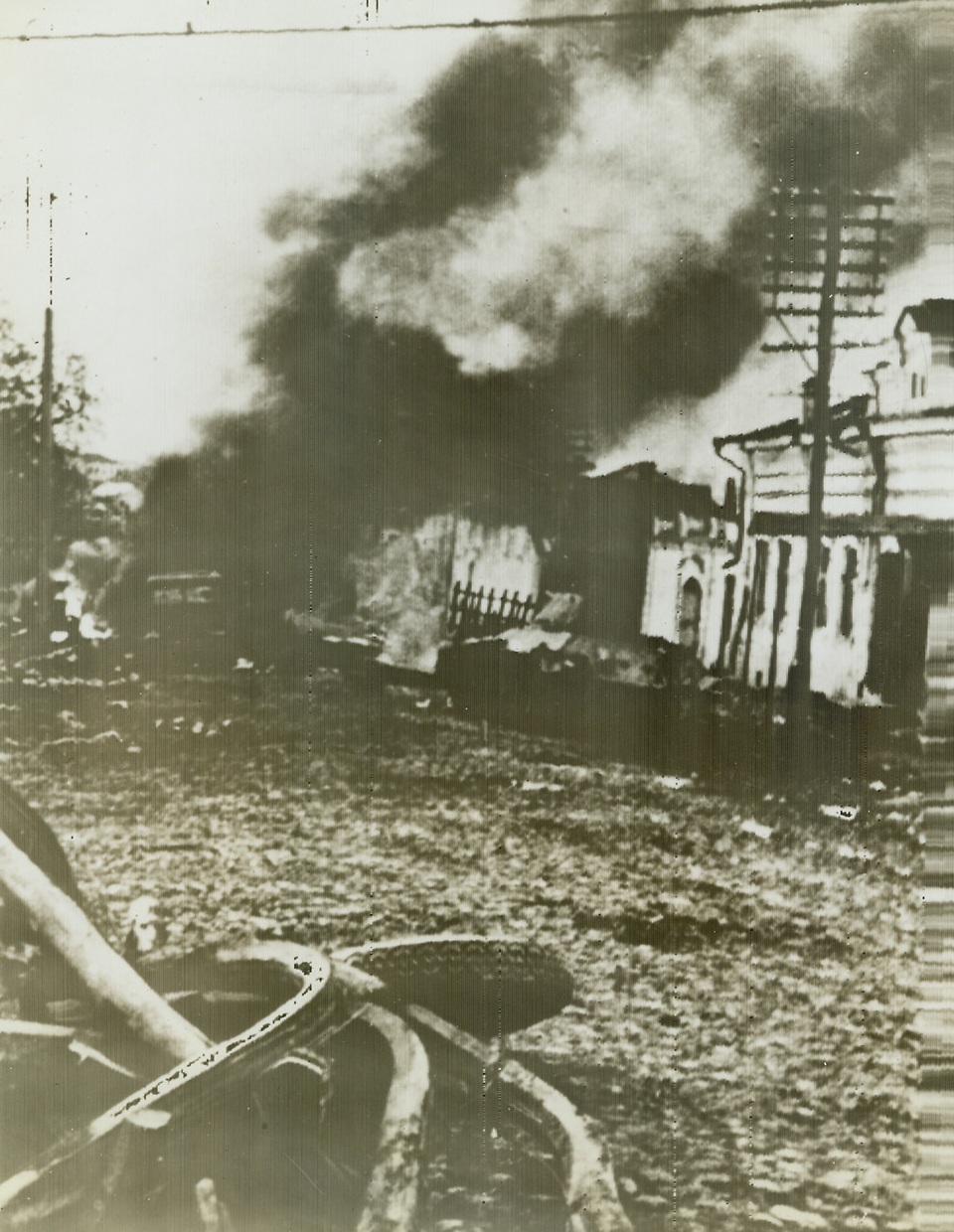 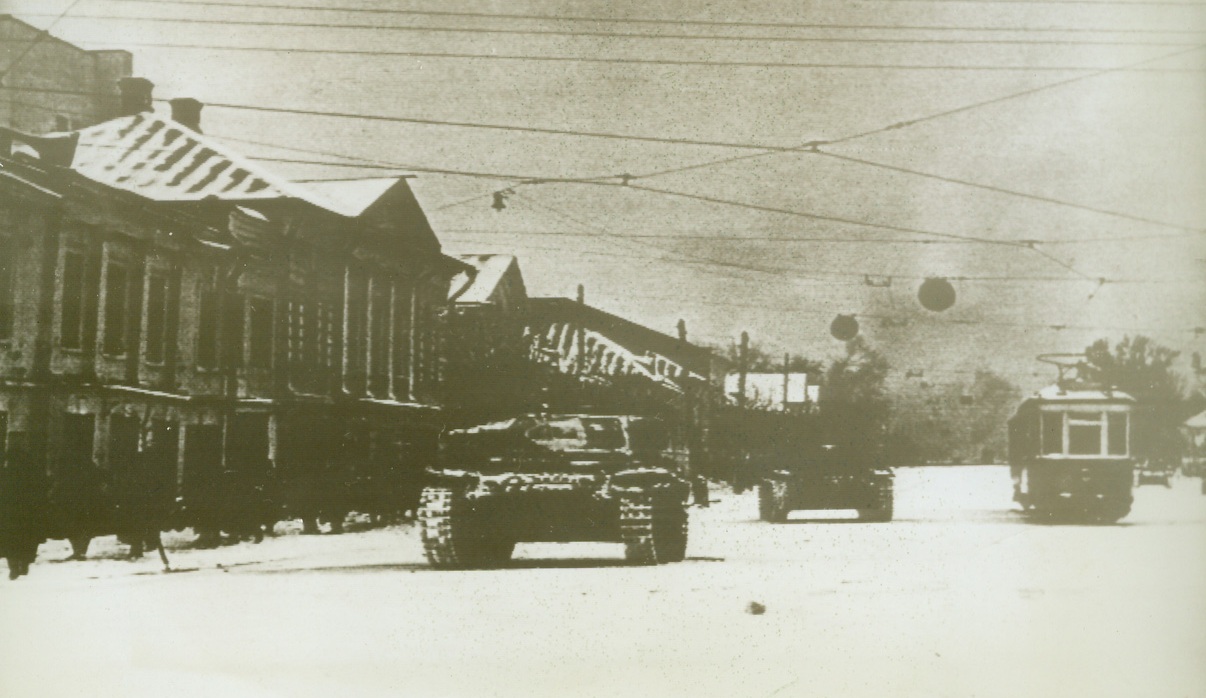 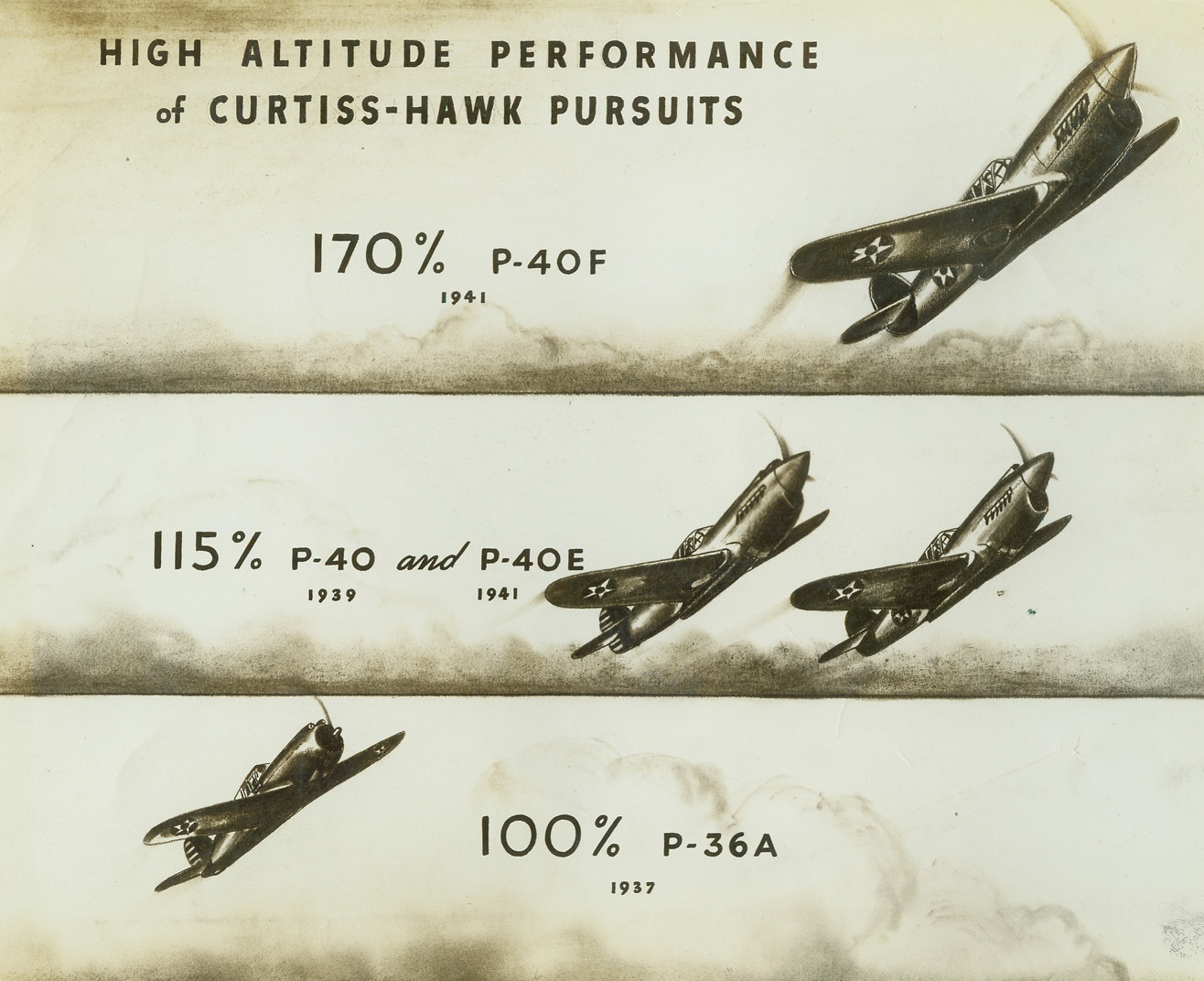 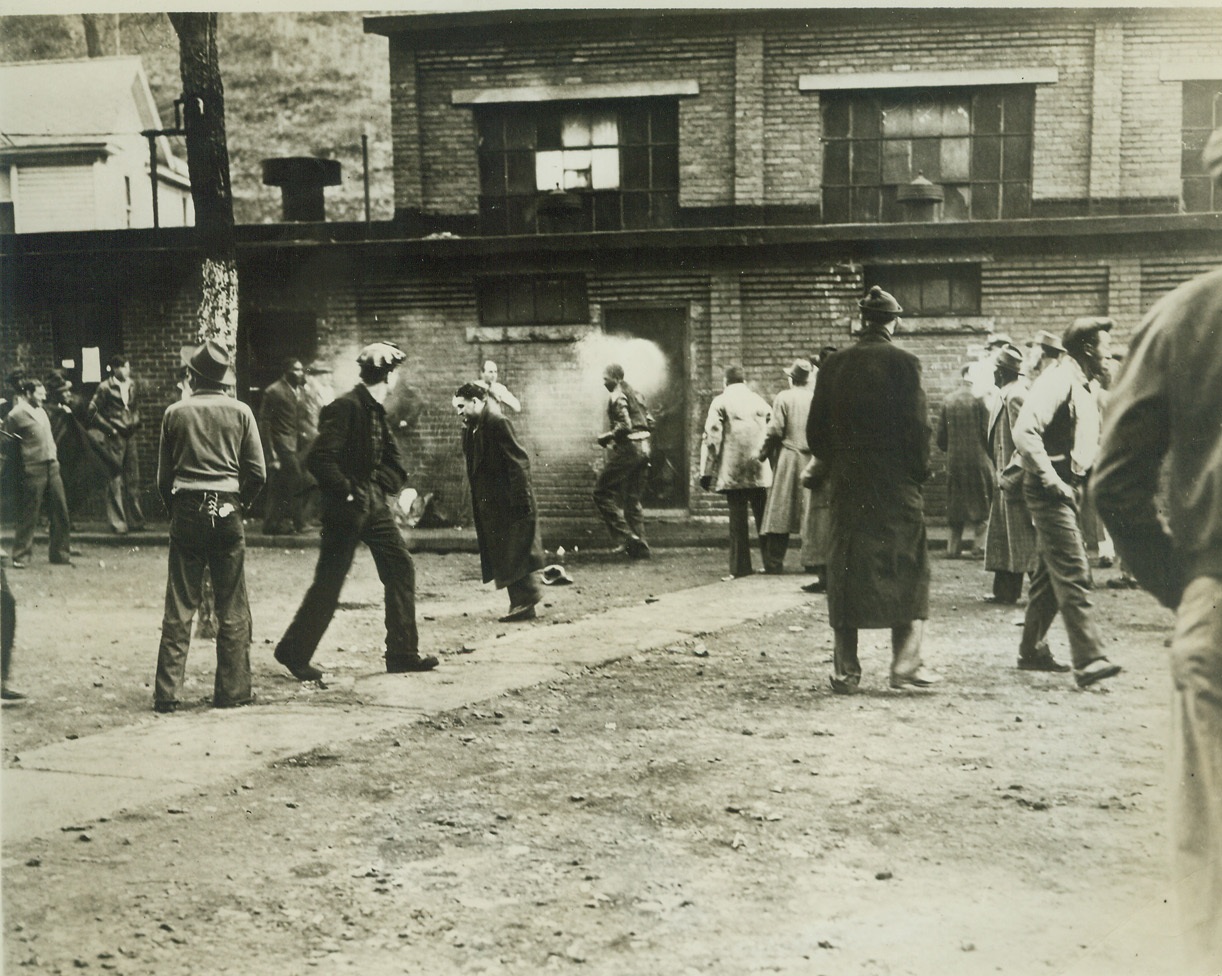 Strike Clash in West Virginia Captive Mine., 11/18/41 Gary, W. VA.—One man was injured in a clash between pickets and members of an independent miner’s union at a captive mine, operated by the United States Coal & Coke Co., in Gary, November 18. The action occurred, when the independent miners tried to enter the mine and the pickets barred their way. Steel bars were hurled, with a liberal sprinkling of rocks, by both sides. Photo above shows one hapless victim being sprayed with a hose. Credit: ACME.; 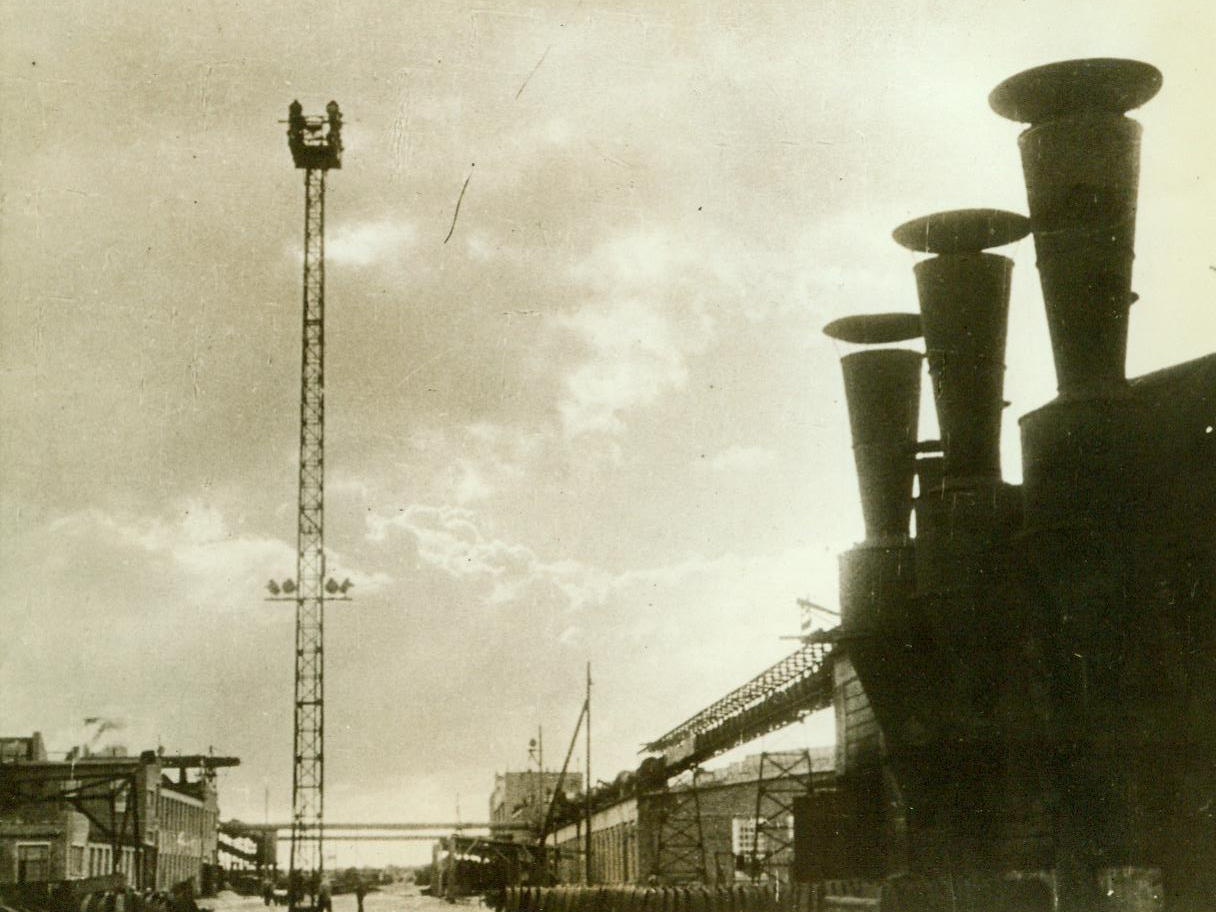 Agricultural Machine Plant At Rostov, 10/28/1941. Rostov – Here’s a view of part of the huge agricultural machine plant at Rostov, key communications center of the coal-rich Donets Basin, where the Germans are reported to be hurling tremendous forces in order to effect an early capture. Soviet dispatches say that 100 German tanks were beaten off in an important sector before the city but that the Reich forces were bringing up heavy reinforcements. Heavy losses were said to have been inflicted on one Elite Guard Division which was reported hurled back. 10/28/41 Credit Line (ACME); 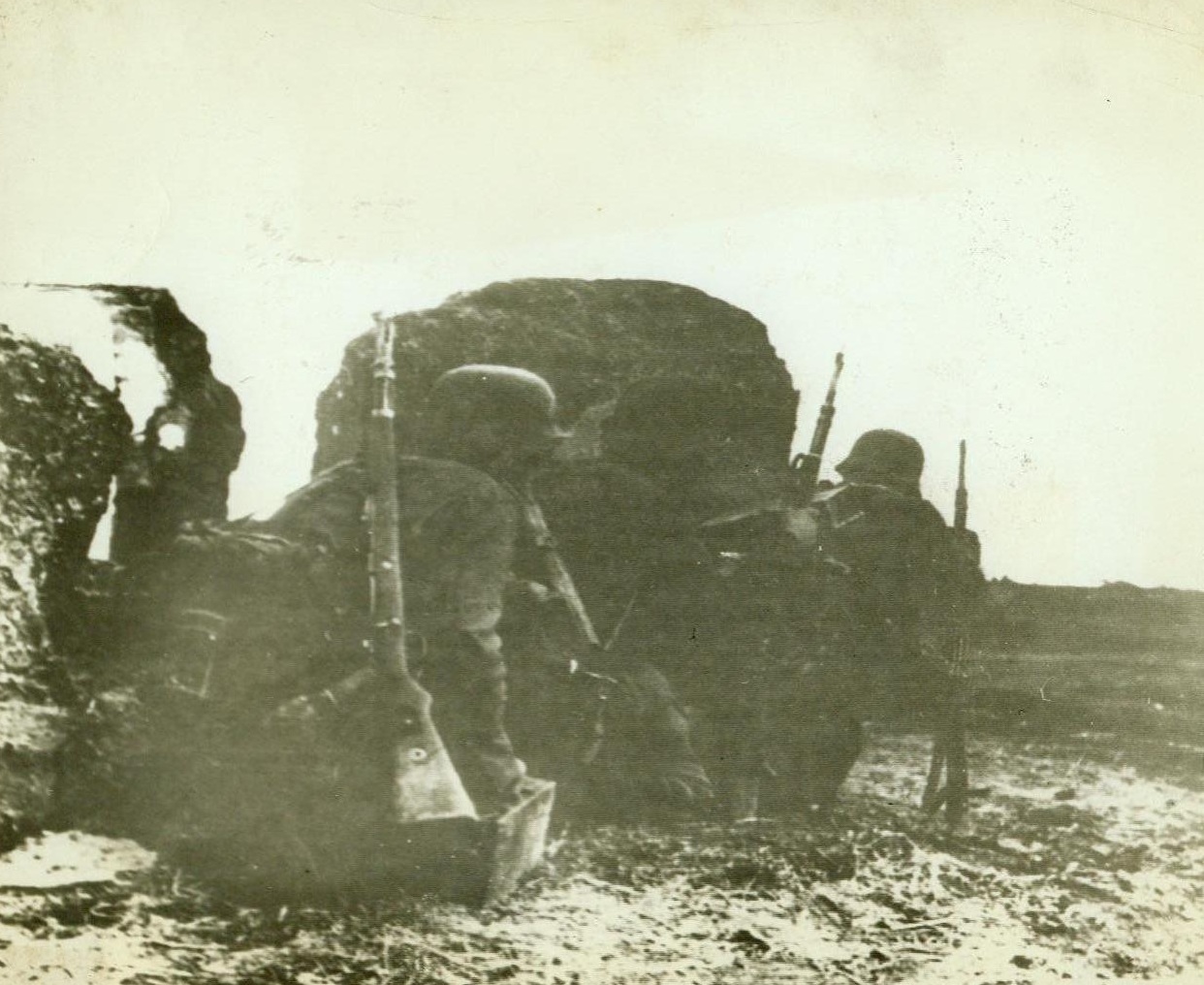 GERMAN ADVANCE IN CRIMEA, 10/29/1941. Under cover of what remains from a house, German troops wait to attack under heavy defensive fire from Russian defenders after breaking thru Soviet front line in the Crimea. Photo passed by German censor and radioed from Berlin to New York today (Oct. 29). Credit (Official German Photo From ACME); 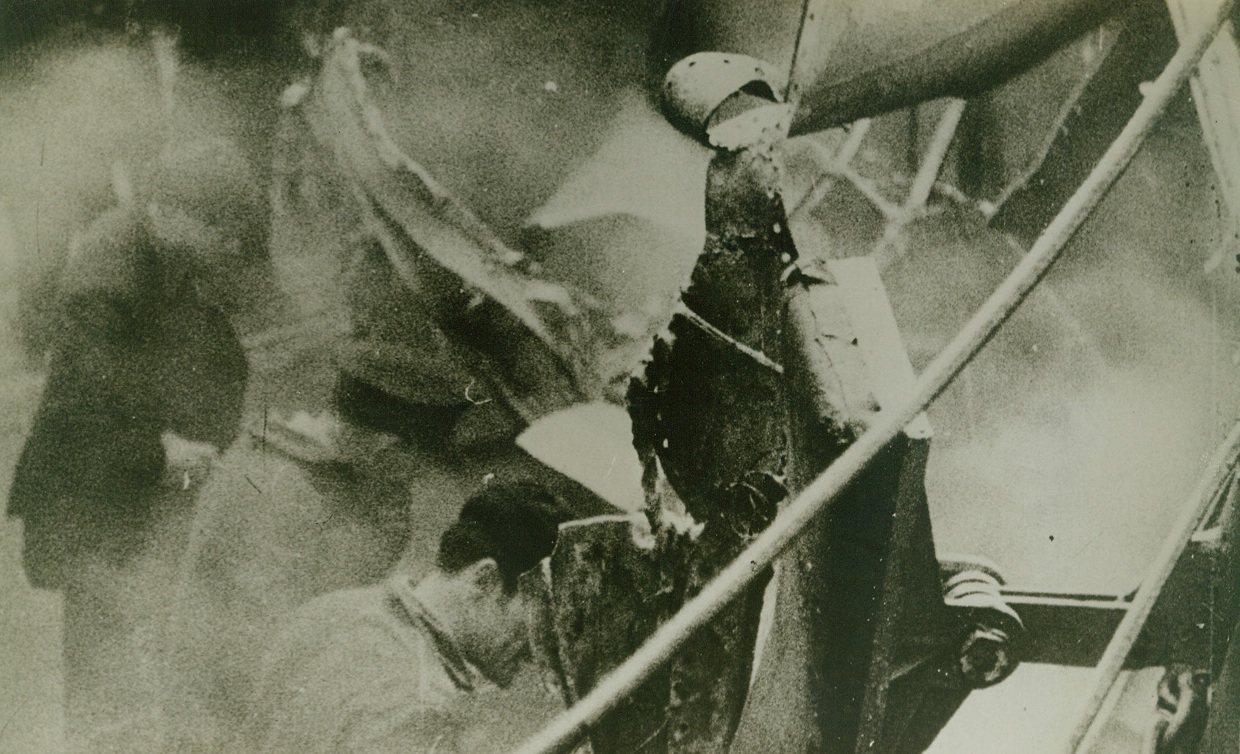 First Photos Of Torpedoed USS Kearny, 10/29/1941. Here are the first pictures of the U.S. Destroyer Kearny after it was torpedoed on Oct. 16-17 some 350 miles southwest of Iceland. Navy Secretary Frank Knox revealed the Kearny, escorting a convoy, received distress signals from another convoy under attack from several German subs. Speeding to help, the crack Destroyer was torpedoed. The blast killed eleven men and injured ten. Photo shows members of Kearny crew inspecting the twisted wreckage below decks after the ship had put in at port which the Navy would not identify. 10/29/41 (US Army Signal Corps); 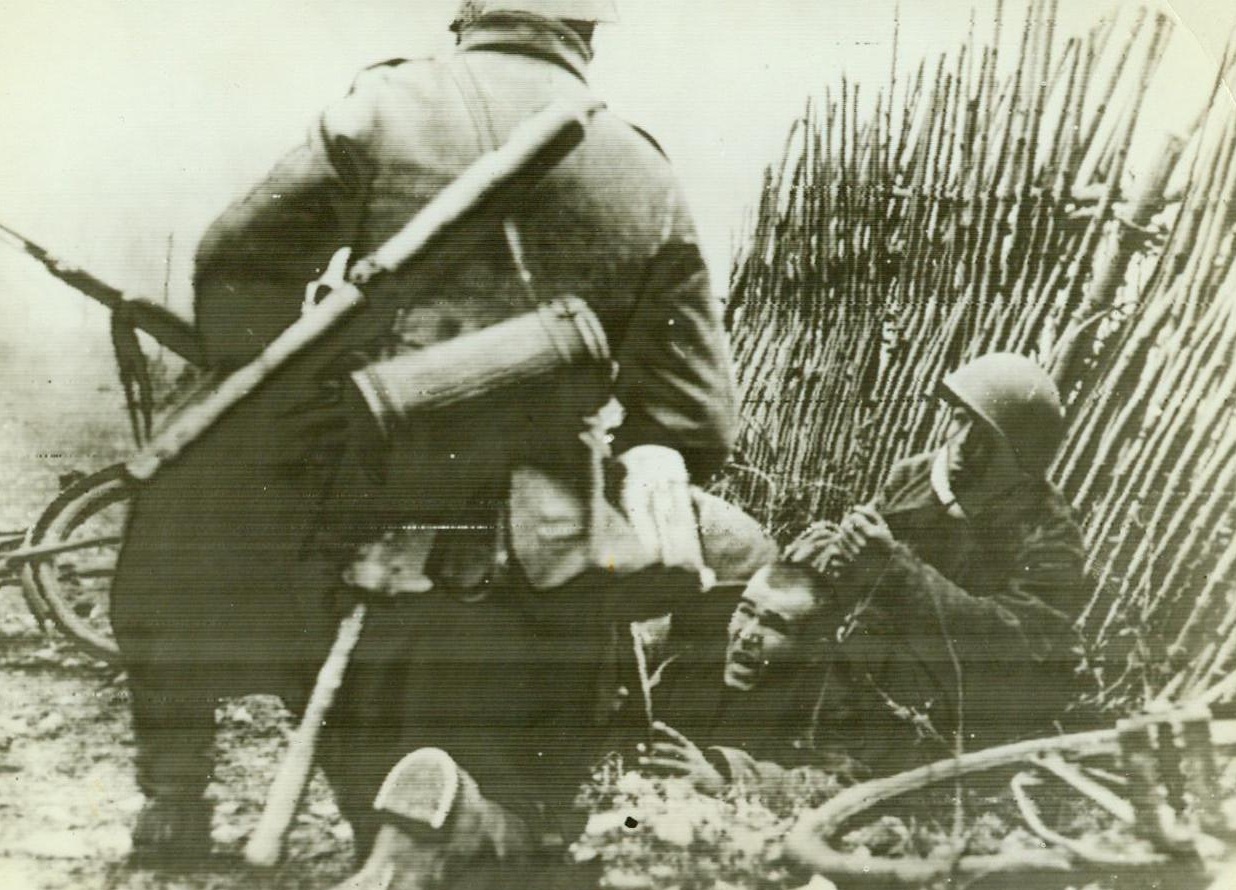 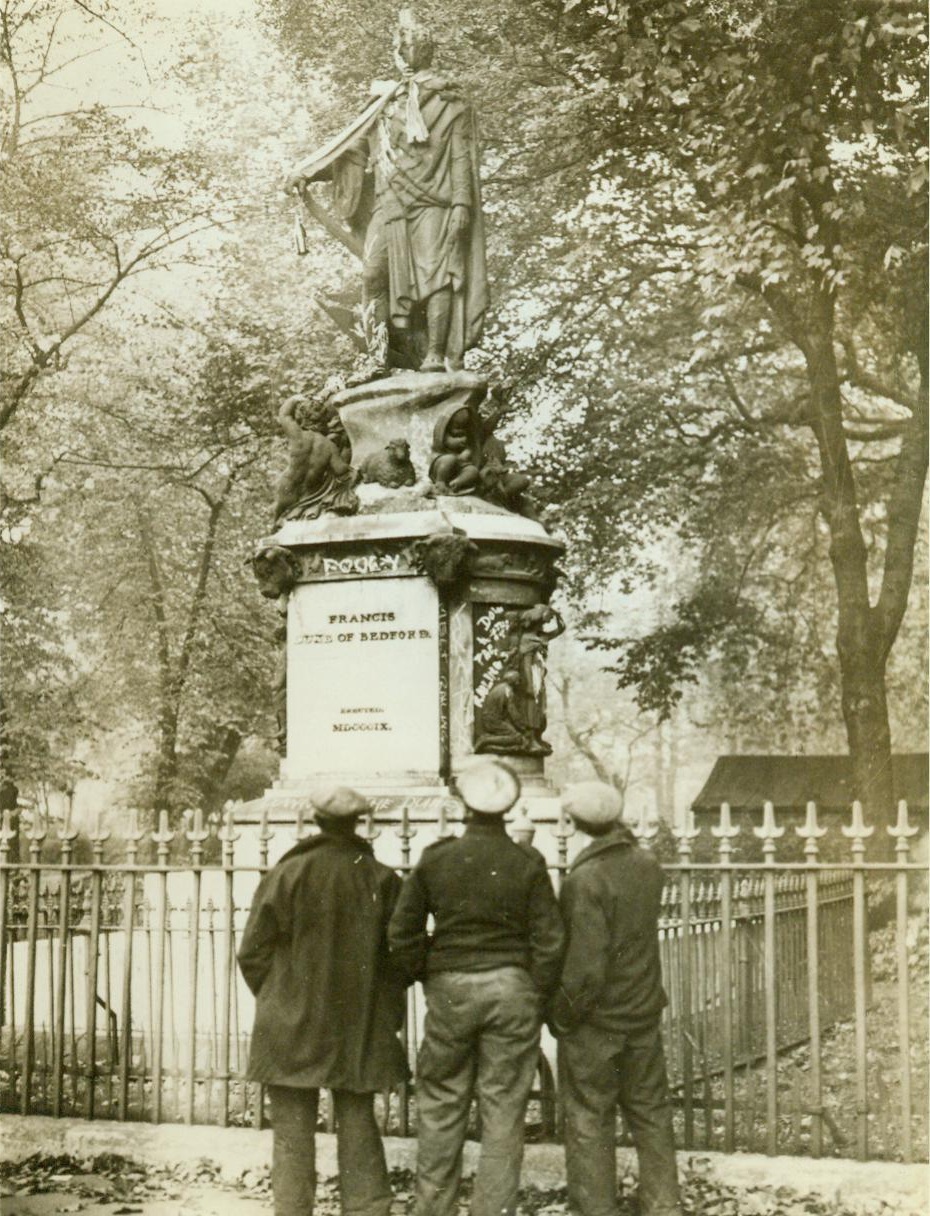 Duke of Bedford’s statue defaced, 11/3/1941. LONDON – Because the present Duke of Bedford would not allow the iron railings around the Duke of Bedford statue in Russell Square to be removed for use in Britain’s defense effort, irate citizens defaced the statue by inverting a paint-pot on the head, hanging a bottle from the wrist, placing a scarf around the neck, and scrawling uncomplimentary remarks around the base. CREDIT LINE (ACME) 11/3/41;