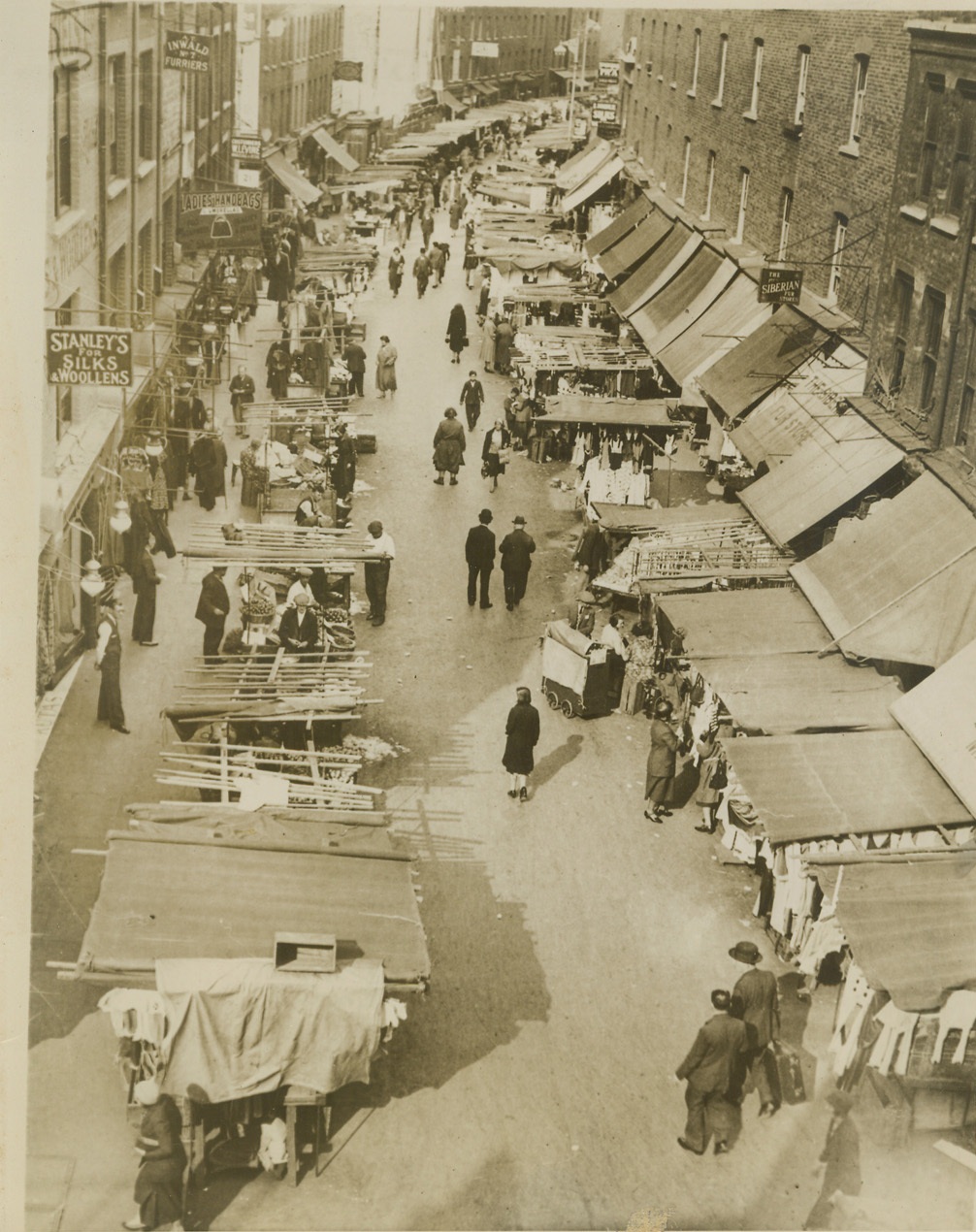 Where Bombs Wreaked Havoc in London, 9/8/1940 LONDON -- A typical street market in Whitechapel, the Jewish quarter of London's East End, where the most pitiful scenes were witnessed after the worst air raid on the British capitol last night. In this district house after house was blown to bits, with most of the occupants killed or injured. Credit: (ACME); 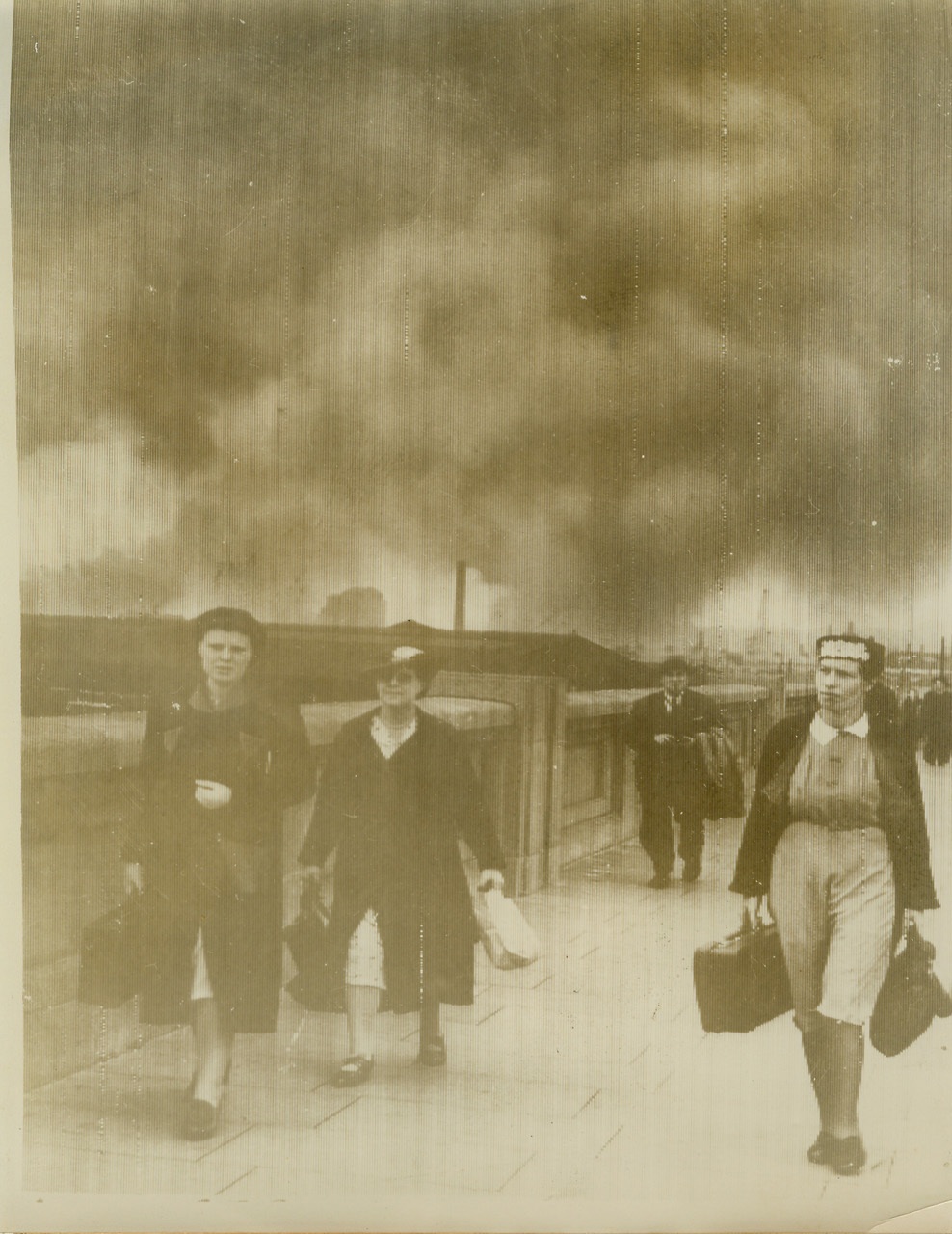 Women Leave Blazing Dock Area, 9/9/1940 LONDON -- Apparently not the least bit panicked by the German onslaught, these women, with faces set, leave the London dock area after air raids made it a blazing inferno. Some 2,000 residents of this area were evacuated from their flame encircled homes by a flotilla of pleasure craft that enacted a miniature Dunkirque. Photo sent from London by radio on Sept. 9th. Credit: (ACME); 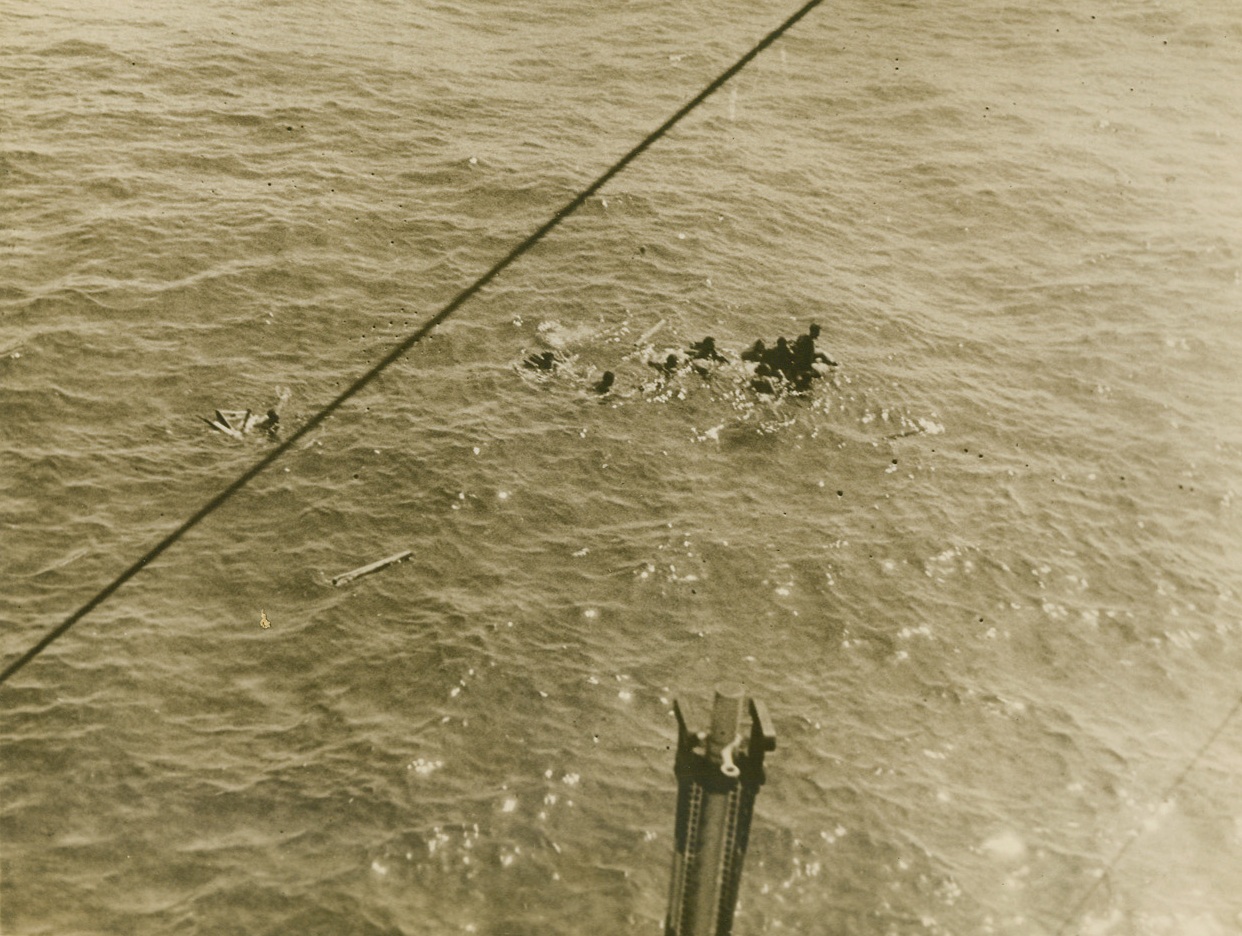 ITALIAN SAILORS IN MEDITERRANEAN, 9/9/1940 ON THE MEDITERRANEAN SEA – Italian sailors cling to wreckage just before rescue. These men were members of the crew of the Italian cruiser, Bartolomeo Colleoni, world’s fastest cruiser, which was sunk by the Australian cruiser Sydney in an engagement in the Mediterranean Sea early this summer. Credit Line (ACME); 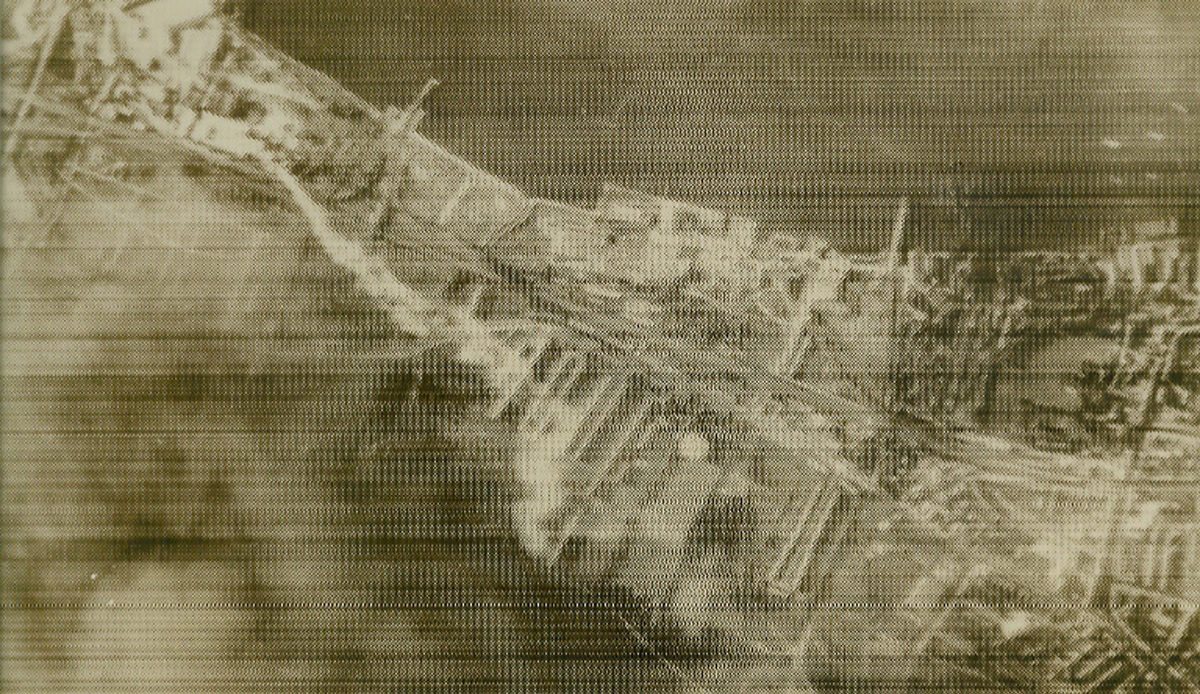 German View of London, 9/10/1940 London—This picture was snapped from a low-flying German bomber flying over the Thames River during the last bombing attacks on London last Saturday. At left, clouds of smoke may be seen drifting southwest from a burning warehouse. This picture, believed to be the first made of the mass raids, was passed by German censor and sent from Berlin by radio on Sept. 10th. Credit: ACME.; 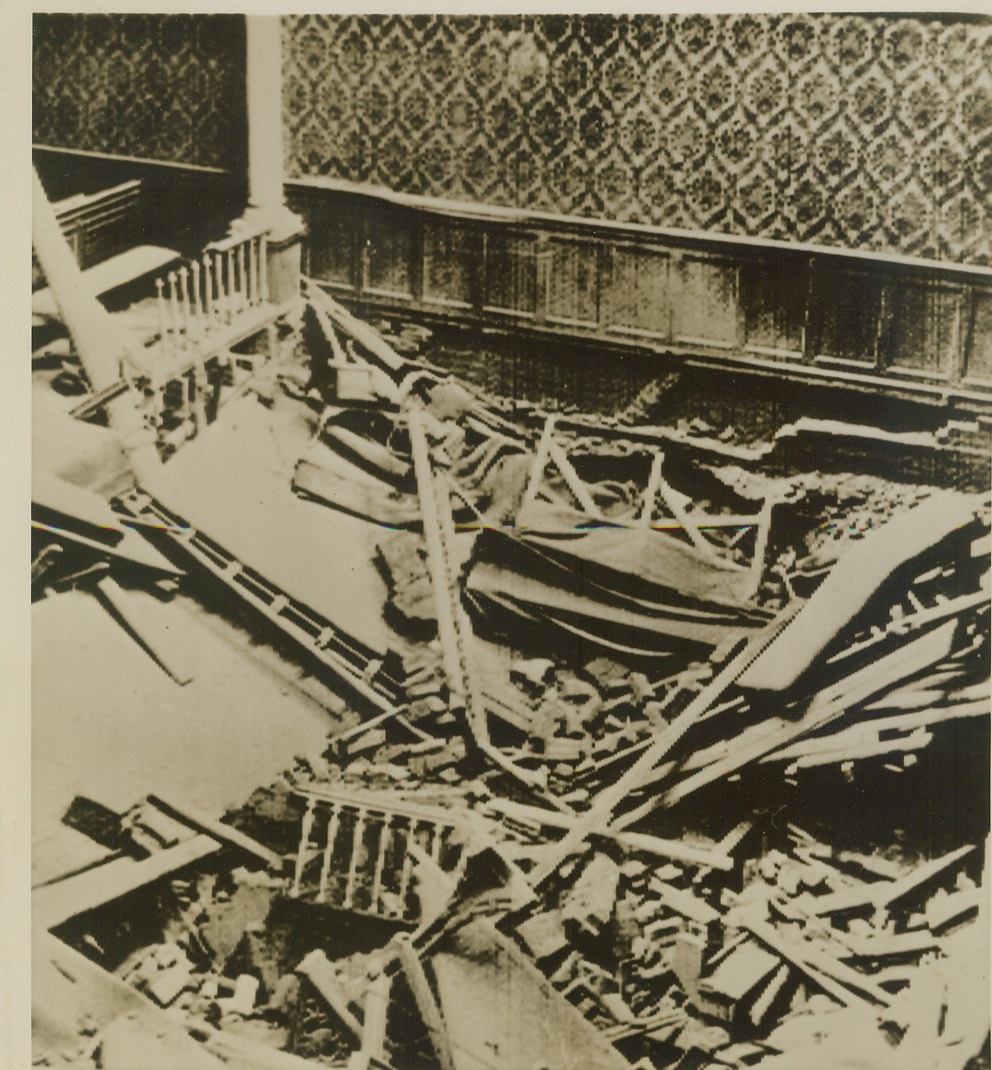 Bomb Damage at Buckingham Palace, 9/14/1940 LONDON, ENGLAND -- The wrecked interior of the royal chapel at Buckingham Palace, after five Nazi aerial bombs had landed on or near the royal residence during yesterday's daylight raids on the British capital. The King and Queen, in the palace shelter at the time, escaped injury. It was the second bombing of the Palace in a week. Credit: (ACME Cablephoto); 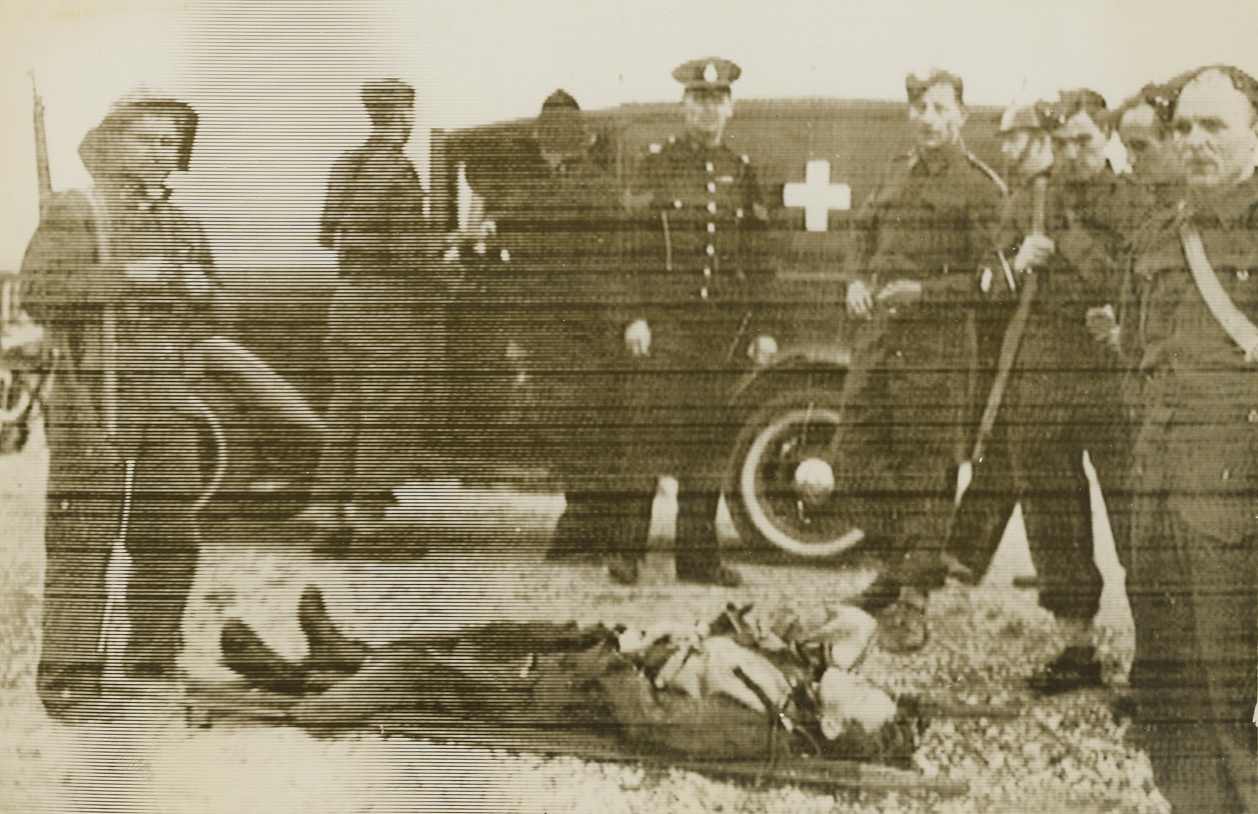 FALLEN NAZI, 9/16/1940 ENGLAND – British soldiers and police stand by an injured Nazi airmen, shot down in a battle over the South coast of England. Photo sent from London by Western Union cable Sept. 16th. Credit: Acme; 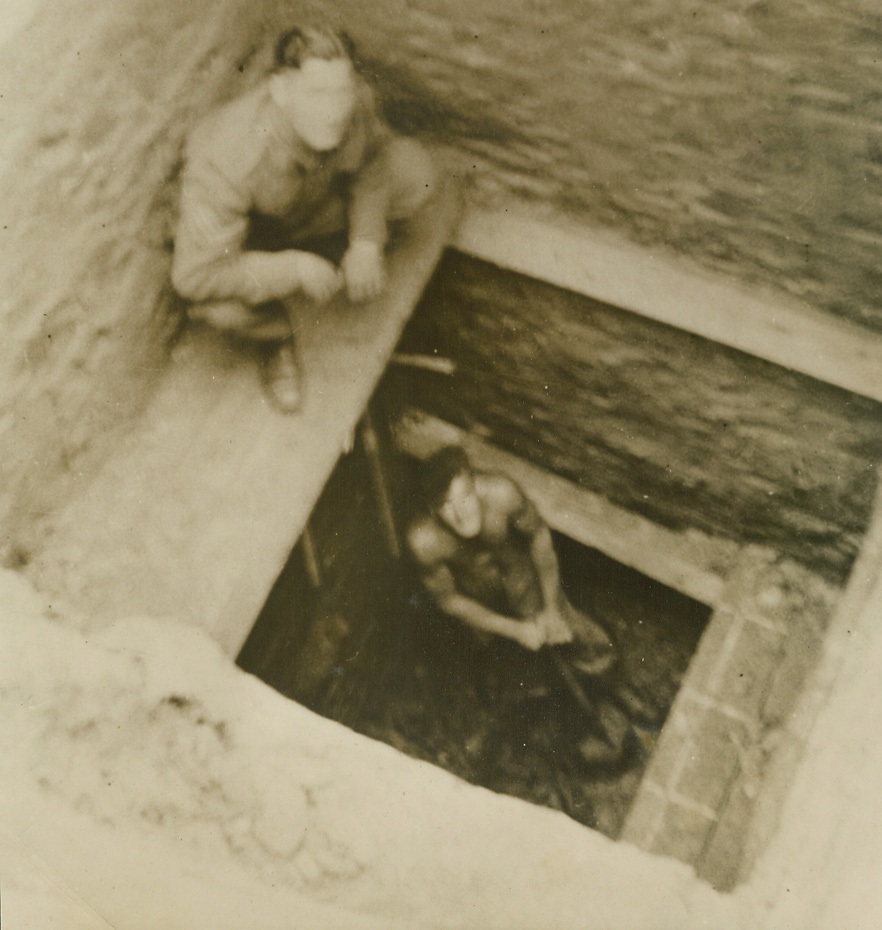 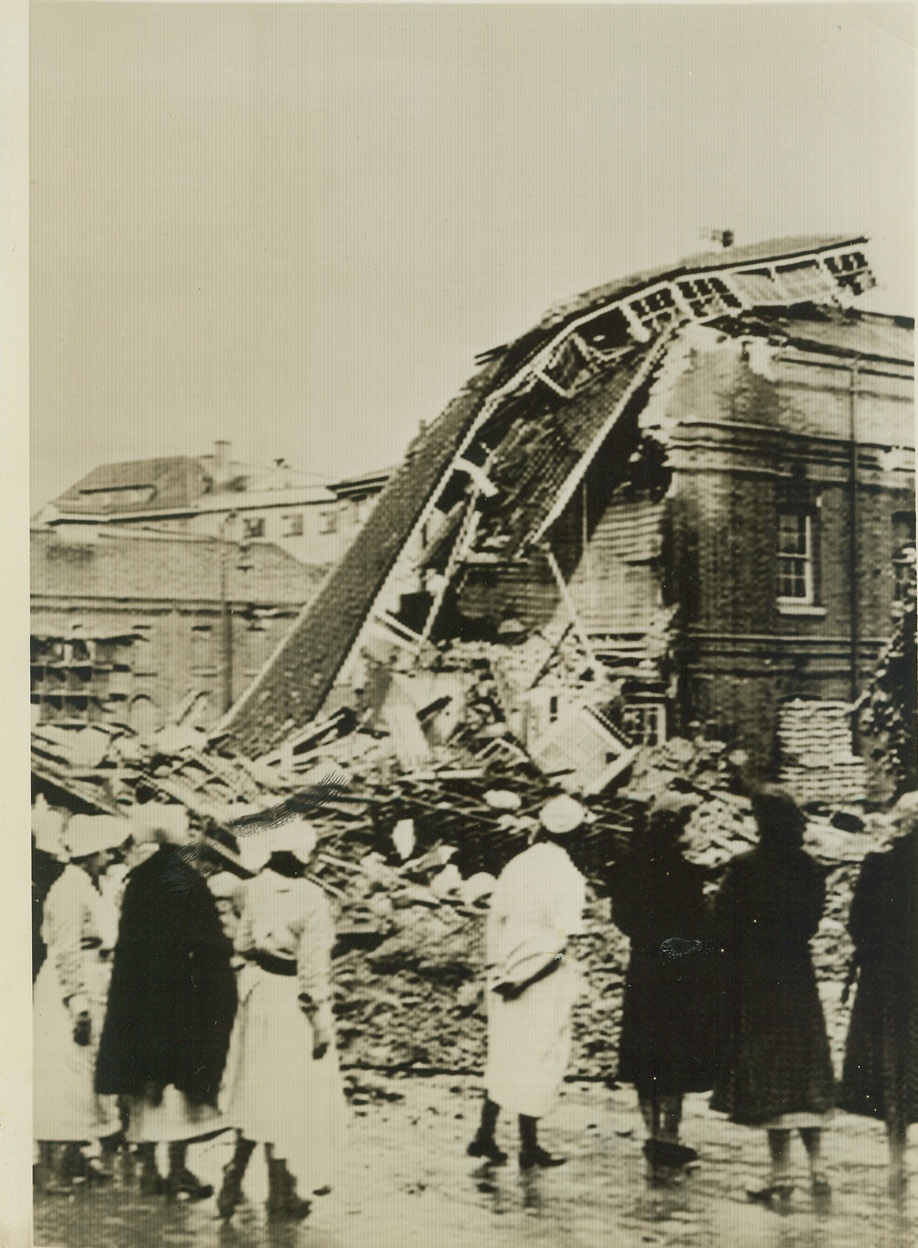 Hospital Wrecked by Nazi Bombs, 9/17/1940 LONDON -- Nurses view the wreckage of an unnamed hospital which was completely smashed during the fury of Germany's most intense air attack on the British capital, Sept. 16. Photo passed by censor and cabled to New York. Credit: (ACME); 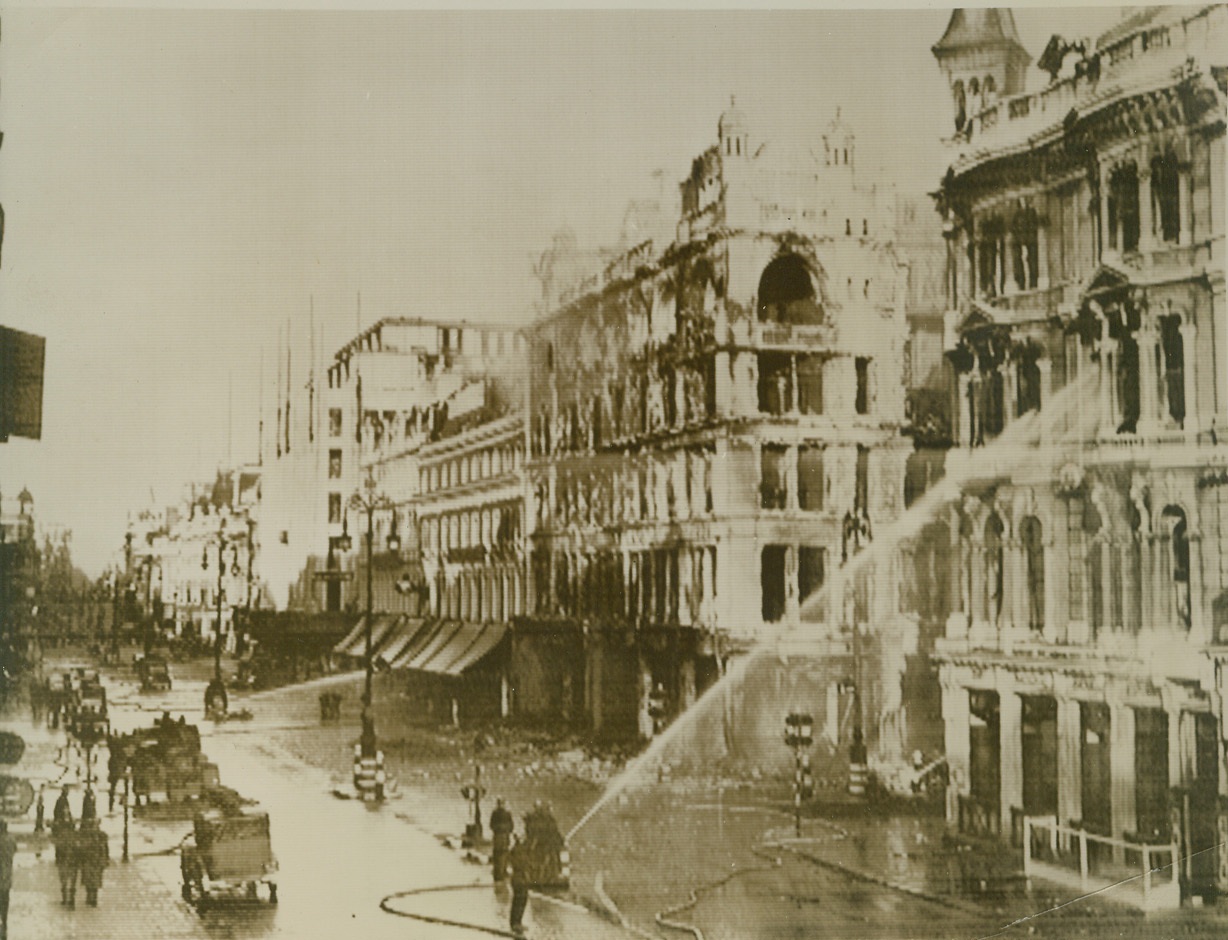 Bombs Crash In London's Shopping Center, 9/18/1940 LONDON -- Bombs and fire, resulting from German air attack Sept. 17, destroyed many of the city's most fashionable department stores, located in Oxford street. This general view, cabled from London to New York, shows the extent of the attack as felt in Oxford Street. Credit (ACME Cablephoto); 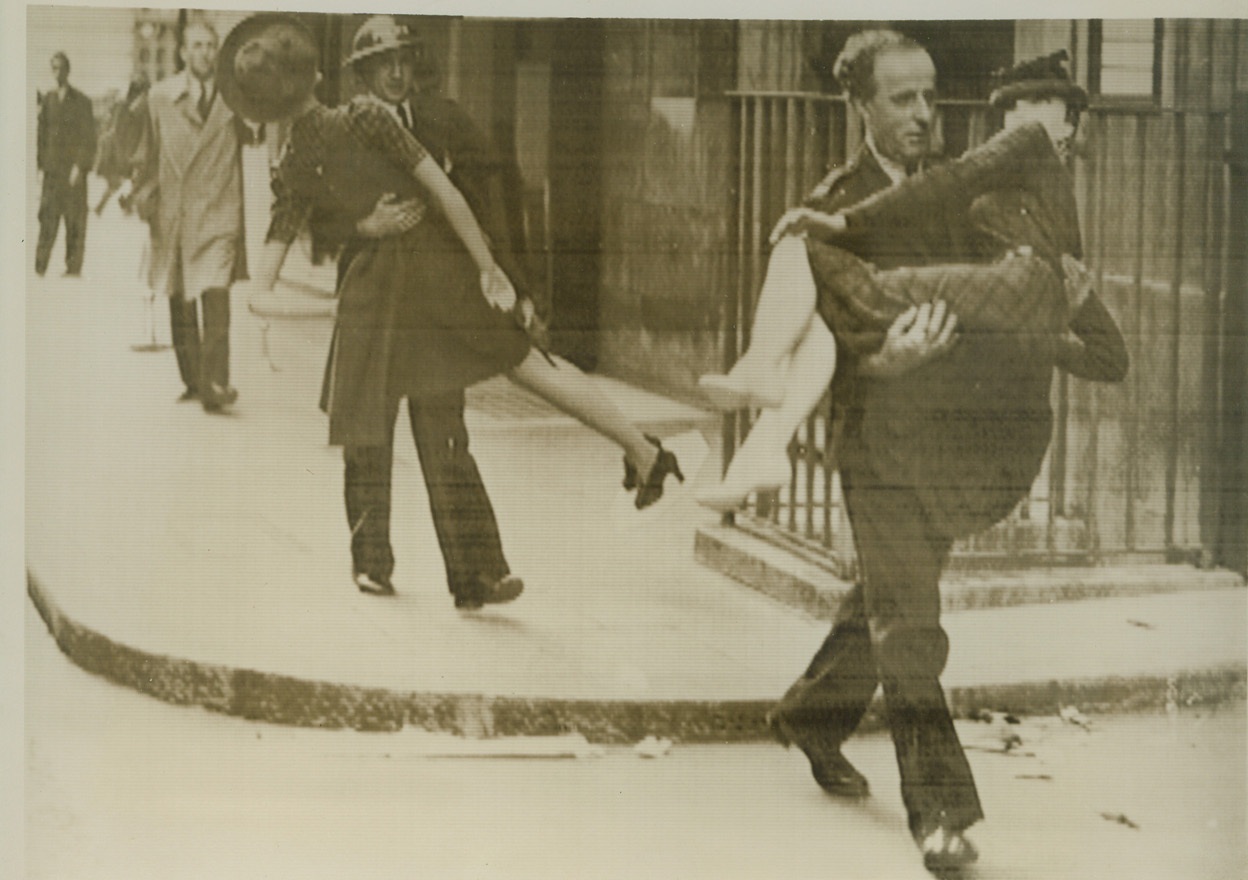 Rescue Squad at Work in London, 9/18/1940 LONDON -- Casualties of Germany's fierce air attack on London's fashionable shopping district, Sept. 17, are being taken to a place of safety. However, the "women" being carried by rescue workers are only the wax dummies blown out of windows of department stores by the bomb concussions. Many of the models just melted away in fires caused by the raid. Credit (ACME Cablephoto); 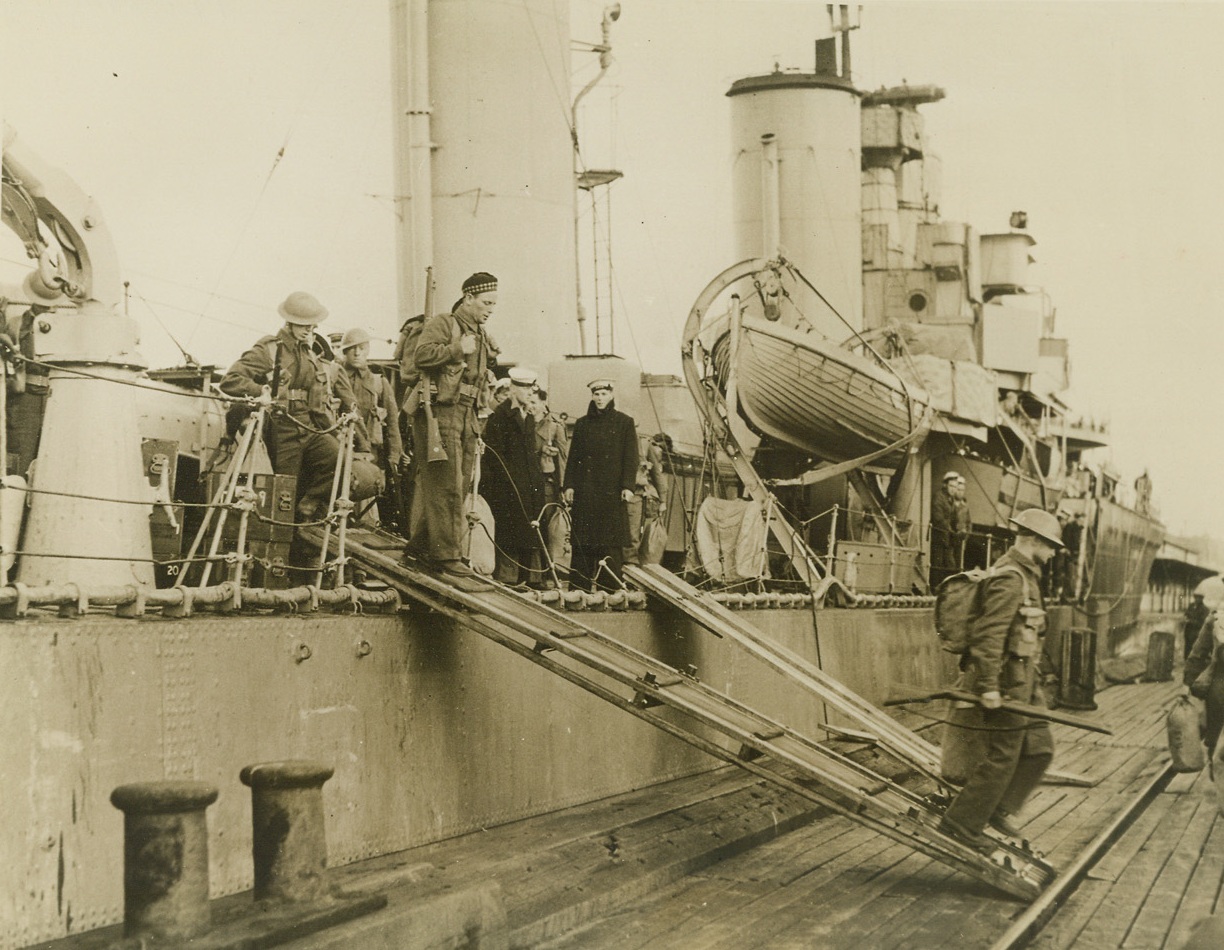 Safe Landing, 9/19/1940 Newfoundland – Canadian troops walk down the gang-plank upon arrival in Newfoundland for duty. They were transported without incident by destroyers of the Royal Canadian Navy. Credit: ACME; 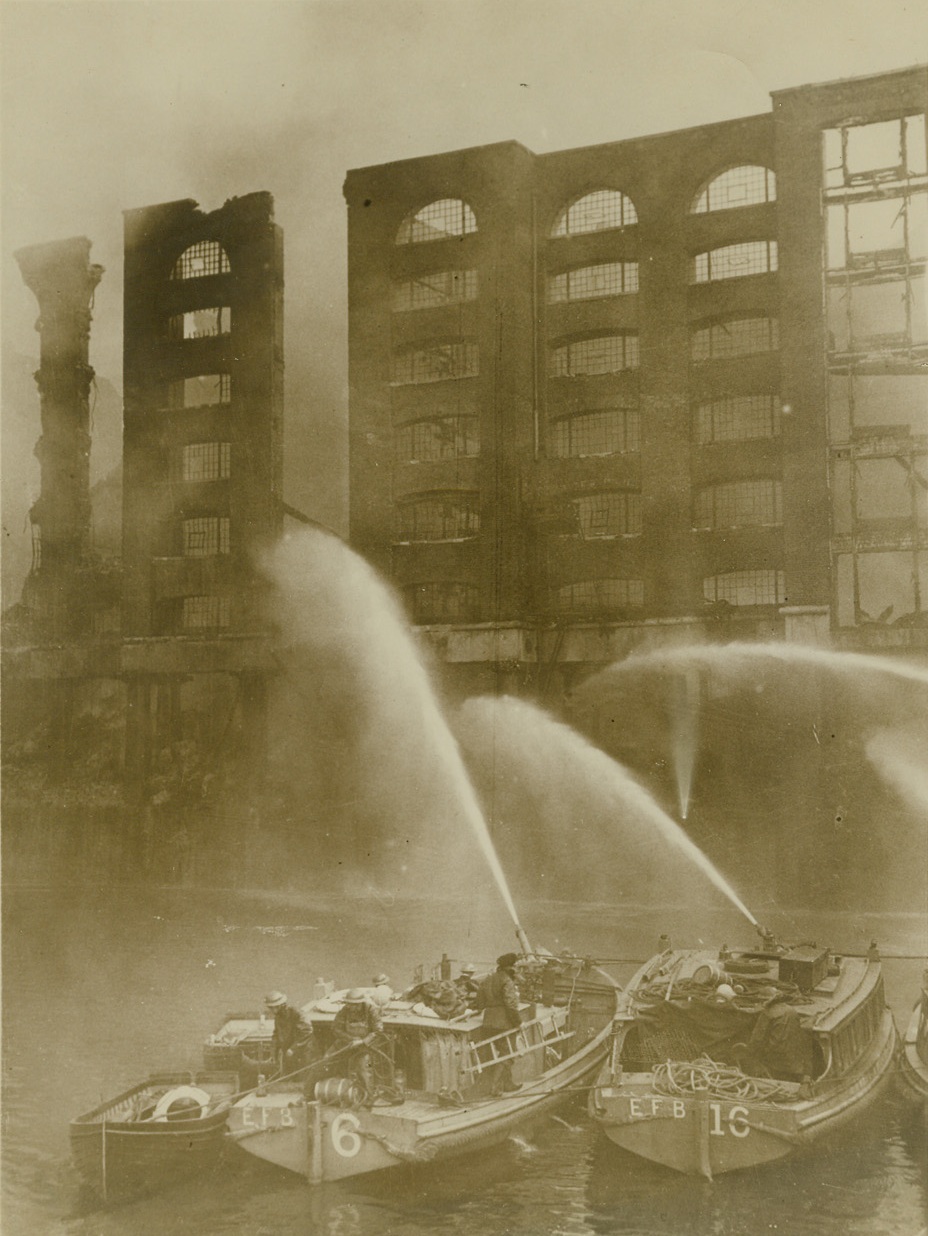 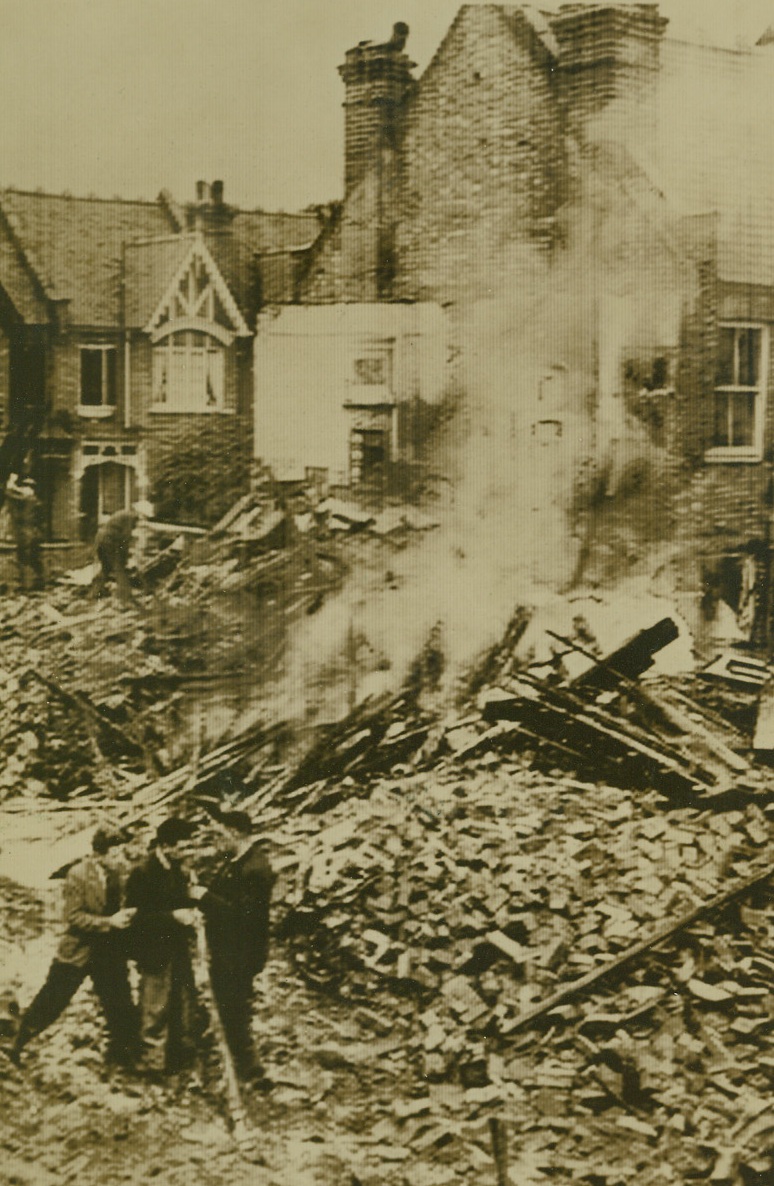 WHERE NAZI PLANE FELL ON LONDON HOUSE, 9/20/1940 LONDON—Blazing wreckage of a raiding German plane after it fell and smashed a London home. Credit: Acme Cablephoto; 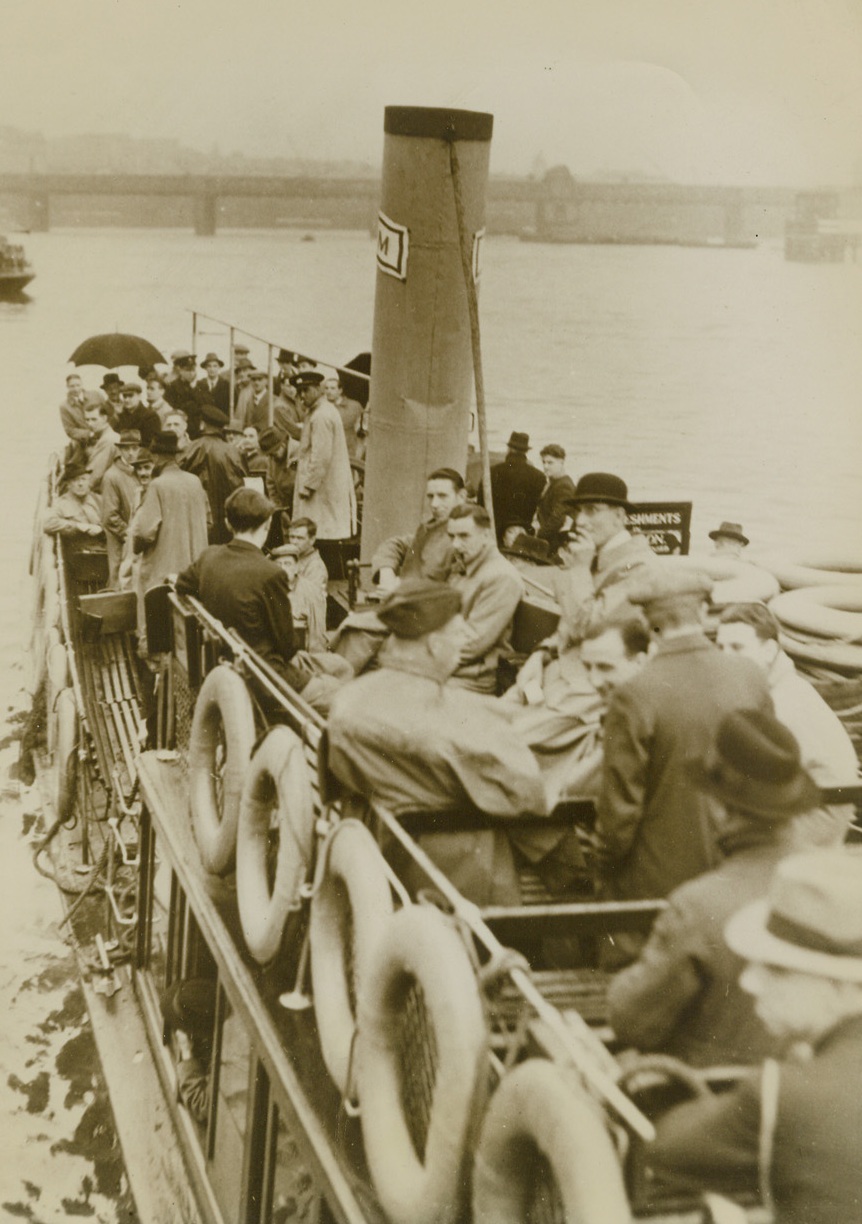 RIVER TRAVEL TO RELIEVE LONDON CONGESTION, 9/20/1940 LONDON—This is one of new ferryboats operating on the Thames River to relieve road congestion in London. The boats, operation between Woolwich and Westminster, will run on a 20-minute schedule. Credit Line (ACME); 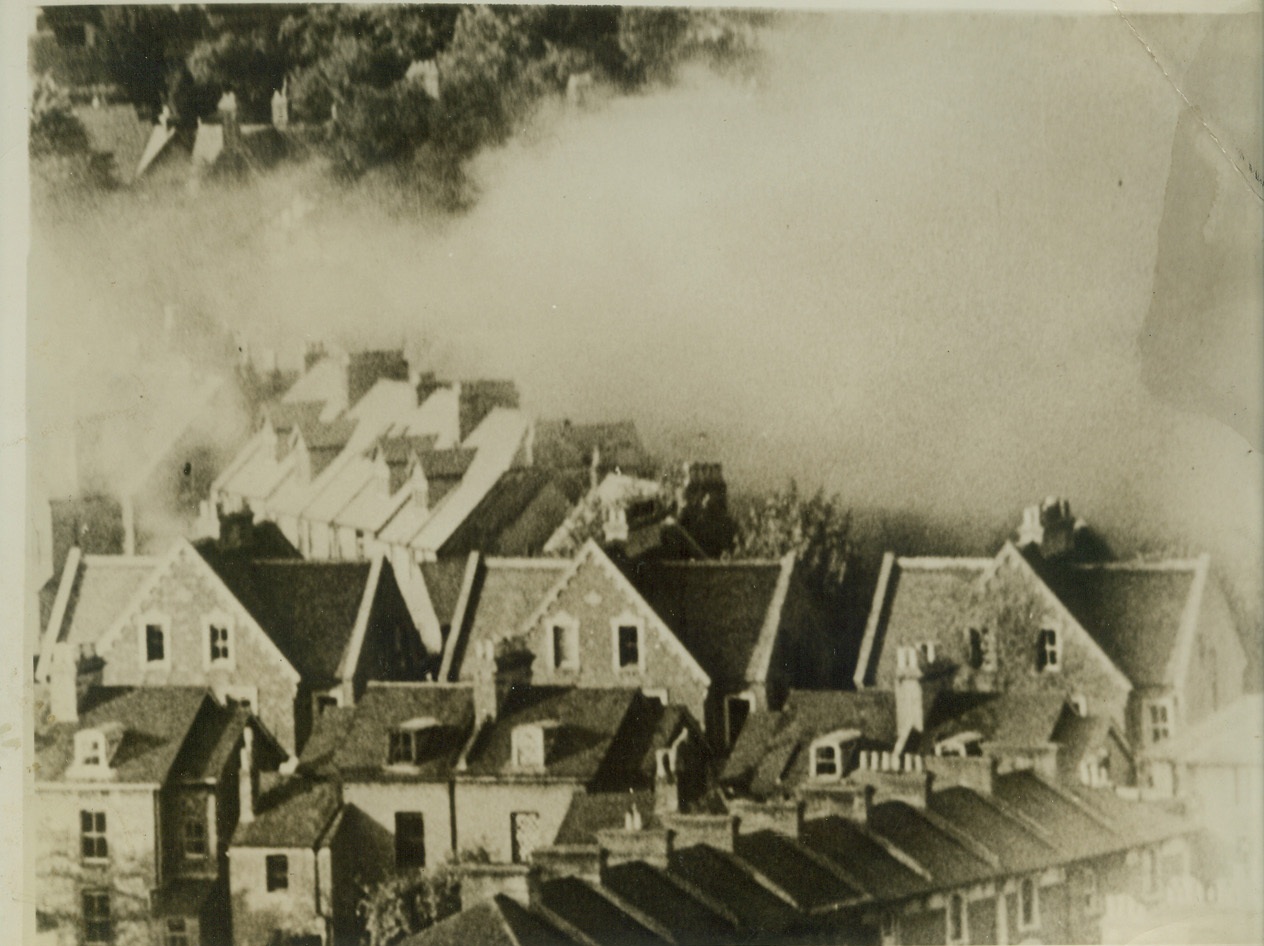 Fires Rage in Bombed Dover, 9/23/1940 DOVER, ENGLAND -- Smoke drifts over the roofs of these Dover houses after one of the Nazi air raids whose frequency and fierceness on this southeast coast port have caused it to be renamed "Hell's Corner". Credit: (Movietone News from ACME); 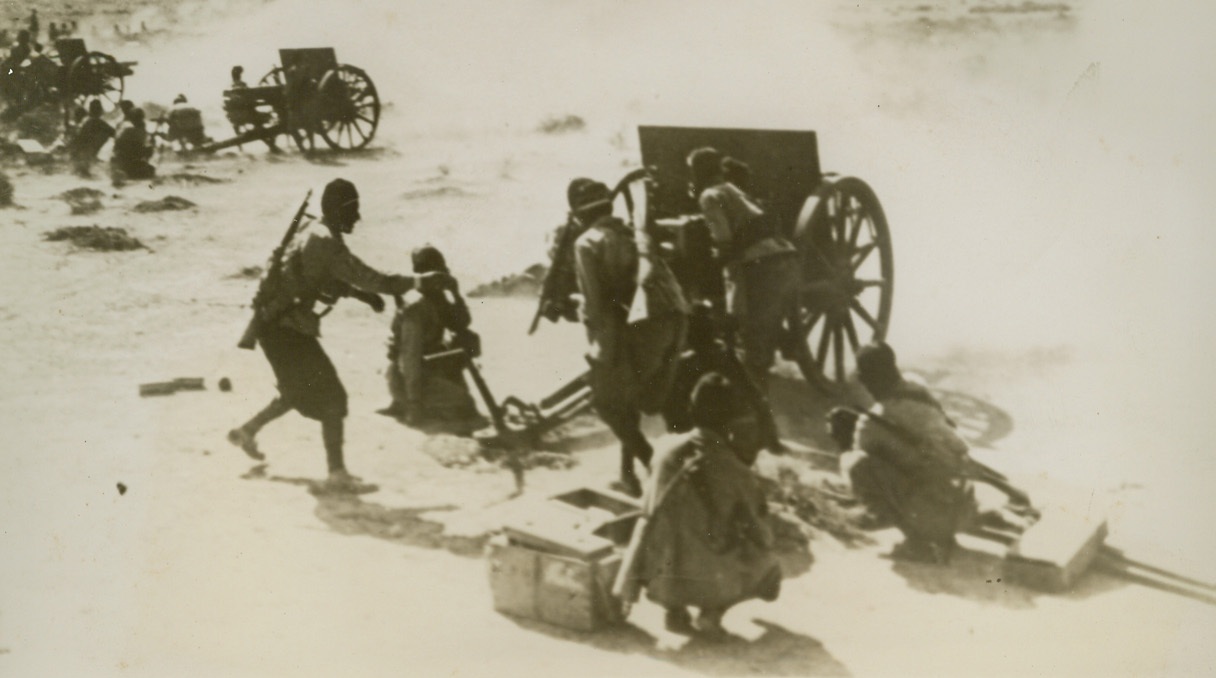 Libyan Barrage, 9/23/1940 Libya – Italian native artillery in action in Libya. A recent report states that the Italian troops that advanced into Egypt from Libya filled the town of Sidi Barrani, Egypt, when it was blown to bits by land mines set off by retreating British. Credit Line (ACME); 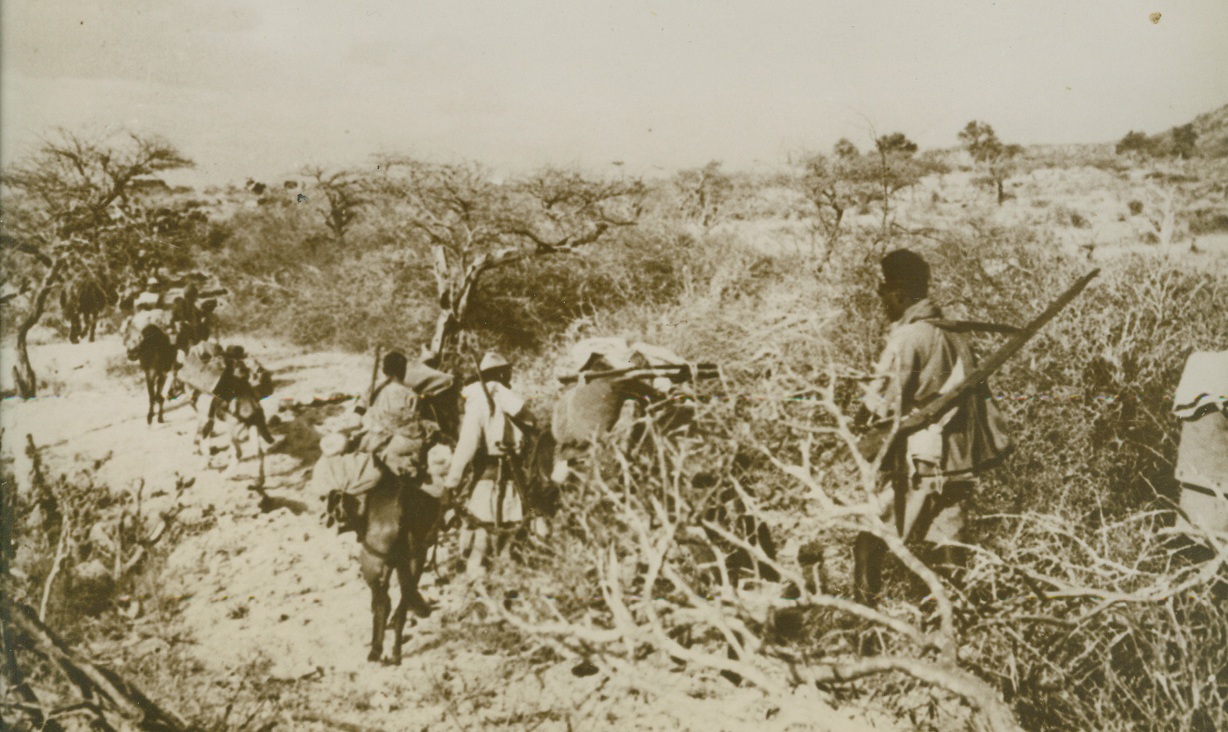 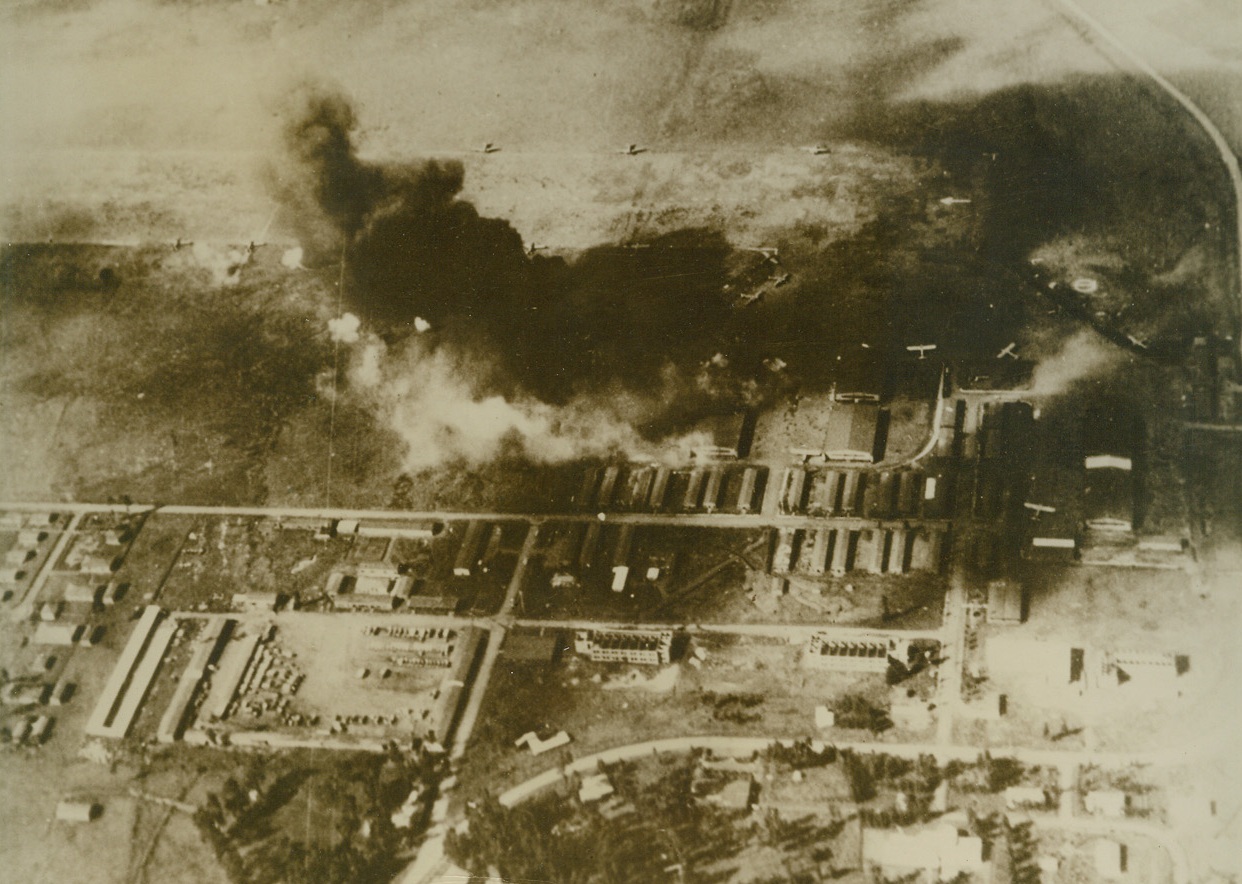 The Bombing of Ethiopian Capital, 9/30/1940 Addis Ababa - - This is the official photograph of a royal Air Force raid on the military airfield at Addis Ababa, capital of Ethiopia. The official R.A.F. communiqué issued at the time stated that direct hits were registered on four hangars and that a gasoline fire was started. Credit line (ACME);