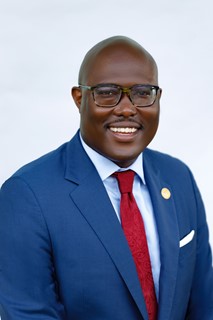 Little Rock voters made history on Dec. 4, 2018 when they selected Frank Scott, Jr. as the City’s 73rd mayor and first elected Black chief executive. Since his inauguration on January 1, 2019, Mayor Scott has worked to unite Little Rock’s diverse neighborhoods through expansion of our economy, creating new opportunities for educational growth for Little Rock’s students, improving the safety of our neighborhoods, increased police accountability, and improving quality of life.

Through a pledge to be Little Rock’s Chief Growth Officer, Mayor Scott has overseen the creation of more than 7,000 announced jobs to date, a more than 100% increase over jobs created in the year before he took office. Jobs growth and economic development will continue to play an integral role in ensuring Little Rock residents have the kind of local economy our deserves. New developments such as Costco, Trader Joe’s, and Amazon.com highlight the momentum created because of his election.

The Frankly Reading Summer Series has helped numerous children improve their reading skills. And under the leadership of the city’s first Chief Education Officer, an office created by Mayor Scott, Little Rock has targeted its focus on digital equity and initiated the City's first Community Schools Model. These schools integrate individualized student support services, expand and enrich learning opportunities, and operate as a neighborhood hub to provide other needed trainings and services for students’ families.

Mayor Scott has worked to create a more accountable police department and led the Little Rock Board of Directors to pass ordinances to purchase body-worn cameras and create the City’s first Citizens Review Board. This Board reviews police investigations and provides a process for complaints against Little Rock Police Department policies and practices or its officers. In addition, Mayor Scott called upon LRPD to create a duty to intervene in instances where police believe excessive force is used, ban the use of chokeholds, and create a no-knock warrant policy and threat matrix- all established under his leadership.

Mayor Scott has also prioritized quality of life and place and created the Revitalize. Reimagine. Reinvest. Little Rock Parks Task Force to make recommendations for long-range planning and funding sources for War Memorial and Hindman Parks. At his direction, the Department of Parks and Recreation has expanded residents’ access to these parks through disc golf, outdoor yoga, and other activities.

Anything is possible if we unite vision and purpose to our potential.

Scott began his public-service career in the office of Arkansas Governor Mike Beebe where he served for five years, first as deputy policy director and later as director of intergovernmental affairs. While on Beebe’s staff, Scott continued his education, earning a Master’s Degree in Business Administration from the University of Arkansas at Little Rock. That degree, with a concentration in finance, complimented Scott’s undergraduate degree in Business Administration from the Fogelman College of Business at the University of Memphis.

Determined to put his finance training to work, Scott accepted a position as a community banker with First Security Bank, giving him insight into the issues facing small businesses across the City. At the same time, he continued to devote a significant amount of time to serving both his City and State as a member of the Port of Little Rock Board of Directors and as a member of the Arkansas Highway Commission – experiences which gave Scott an understanding of the critical infrastructure that forms the backbone of any city.

As an associate pastor, youth mentor, and professional, Frank lives out the values he learned growing up in Southwest Little Rock, the same area where he lives, today.  He gives back to the City that invested in him and reminds young people regularly that values are the foundation of a purpose-filled life.

For media inquiries, contact Communications Director Aaron Sadler at asadler@littlerock.gov or at (501) 371-6801.

Rebuild the Rock: State of the City Virtual Experience

2021 - Mayor Scott’s State of the City Address: Speech and Slides

2020 - Mayor Scott’s State of the City Address: Speech and Slides