The City of Little Rock operates under a Council/City Manager form of government. This system combines the strong political leadership of elected officials in the form of a Board of Directors, with the strong managerial experience of an appointed local government manager. Little Rock has established a representative system where all power is concentrated in the elected council as a whole and the Board of Directors hires a professionally trained City Manager to oversee the delivery of public services.

The City Manager's Office provides centralized administration, coordination, control and evaluation of all municipal programs, and is responsible for the day-to-day operations of the City.

Each year, the City Manager develops a Statement of Management Policy to provide guidance and establish specific parameters for departments to follow when developing their annual budgets.

To provide centralized administration, coordination, control and evaluation of all municipal programs, including preparation and control of the budget; and to assist the Board of Directors in developing and implementing public policy.

City Manager Bruce T. Moore established the Employee Recognition Program in 2004 to acknowledge City of Little Rock employees who exhibit a high quality of job performance and significantly contribute to the quality of life within the City.   The recognition begins at the department level and culminates with the selection of one person from the departmental nominees to be chosen as the recipient of the Mahlon A. Martin Award.   Mahlon A. Martin was the first African–American to serve as Little Rock City Manager, Director of the Arkansas Department of Finance and Administration, and Manager of Methods and Standards Departments of Systematics, Inc.   In addition, Mr. Martin served as President of the Winthrop Rockefeller Foundation until his death in 1995.  Although Mahlon's rise up through the ranks to become Little Rock’s first African-American City Manager is highly significant, the choice of naming the City of Little Rock, Employee of Year Award after him is more about the person that he was and the integrity he maintained throughout his career in government.  He cared about people.  After his “rise to the top,” he still retained his reputation for being affable and accessible to the people. 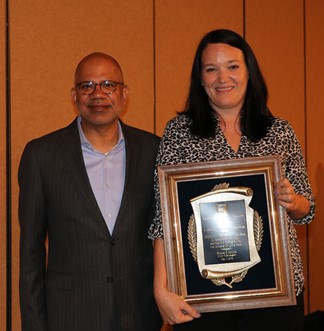