A transportation system that accommodates bikes, pedestrians, and transit is not simply a feel-good luxury; it is essential to the safety and independence of many of Little Rock's residents.  Some residents choose to make some or all of their trips car-free because of the many personal and societal benefits of alternative transportation, others do not have that choice.  Many low- and middle-income residents and families depend on a transportation system accessible without a vehicle because they can't afford a car or enough cars to meet their transportation needs with vehicles alone.  Failure to design for bikes, pedestrians, and transit will not cause these families to abandon their only means of mobility, it only makes their daily lives more dangerous (Fig. 1). 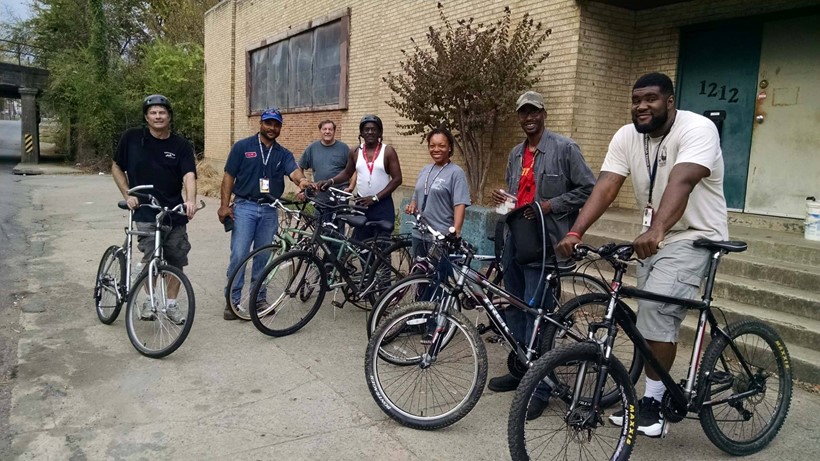 Figure 1.  Some of the thousands of Little Rock residents served by Recycle Bikes for Kids annually.  Photo by RBfK 11/4/16.

Did you know that the cost of owning and operating a car for most Little Rock residents is over $10,000/year?  Given Little Rock's median household income of $48,463/year and that 17.8% of residents live in poverty,it is no wonder that transportation is considered unaffordable throughout Little Rock (Fig. 2), that many households do not own a vehicle (Fig. 3), and areas of low vehicle ownership overlap with family poverty rate (Fig. 4).  Transportation can be challenging even for households that own one car if more than one adult works, if children need transportation to school, etc.  Making transportation alternatives safe and convenient helps many households balance their budgets without endangering their lives. 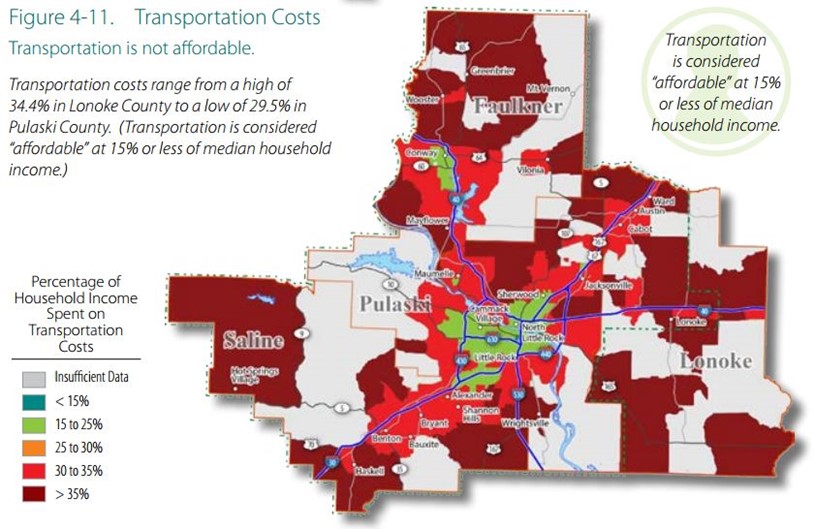 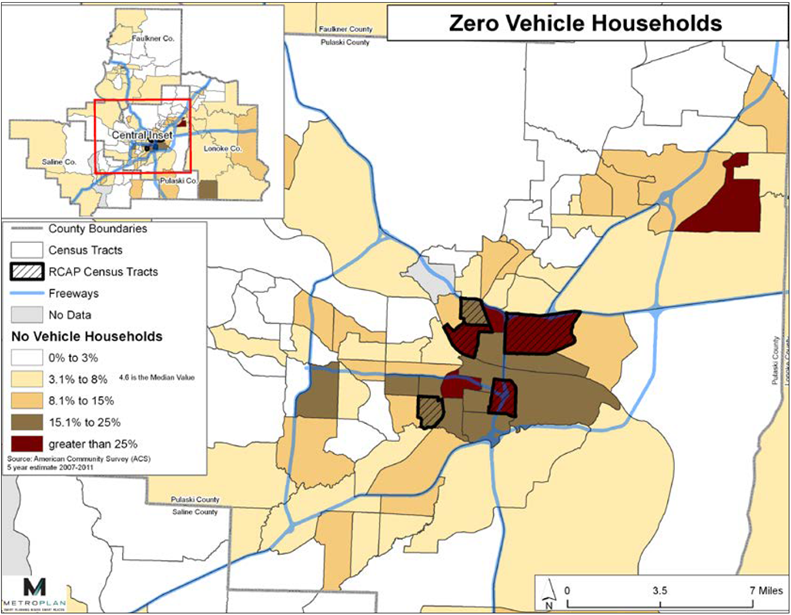 Figure 3.  15% or more of households in much of Little Rock do not own a vehicle (Imagine Central Arkansas, pg. 56). 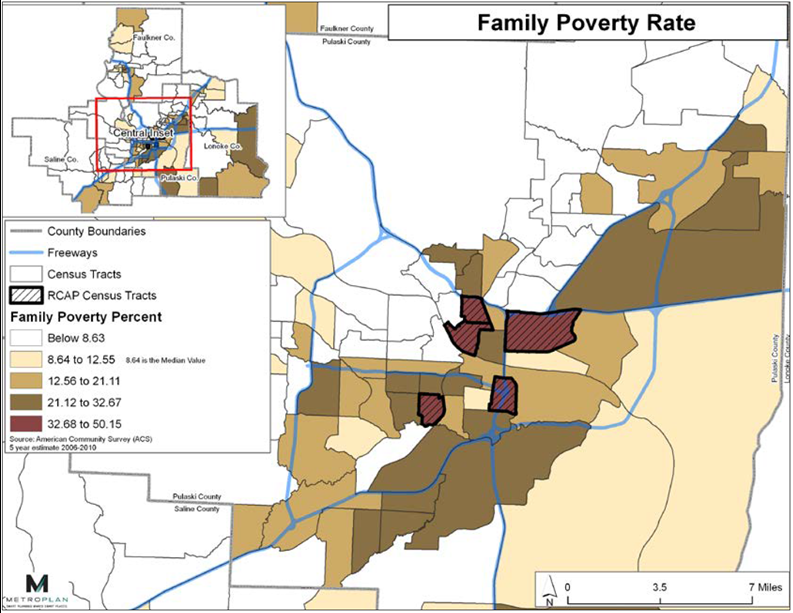 Costs of Other Transportation Options

Transit:  Rock Region Metro is becoming more convenient than ever with GPS-tracked buses and a smartphone app that can allow users to track and anticipate bus and streetcar movements. Buying a monthly Rock Region Metro pass at $36/month (or less) comes to $432/year (or less).  Rock Region Metro serves most of the City of Little Rock assuming a 3/4 mile buffer from routes (Fig. 5).

Bike:  The annual cost of owning and operating a bicycle is $308/year. If this is a financial burden, Little Rock/North Little Rock is home to Recycle Bikes for Kids, which provides bicycles to children free of charge and adults in exchange for three hours of service fixing up bikes for the next “customers”. Thanks to Recycle Bikes for Kids, owning and operating a bicycle in Little Rock can simply cost you a few hours of your time over the lifetime of the bike!

Pedestrian:  Walking is effectively free but most realistic as a regular transportation option for short distances. 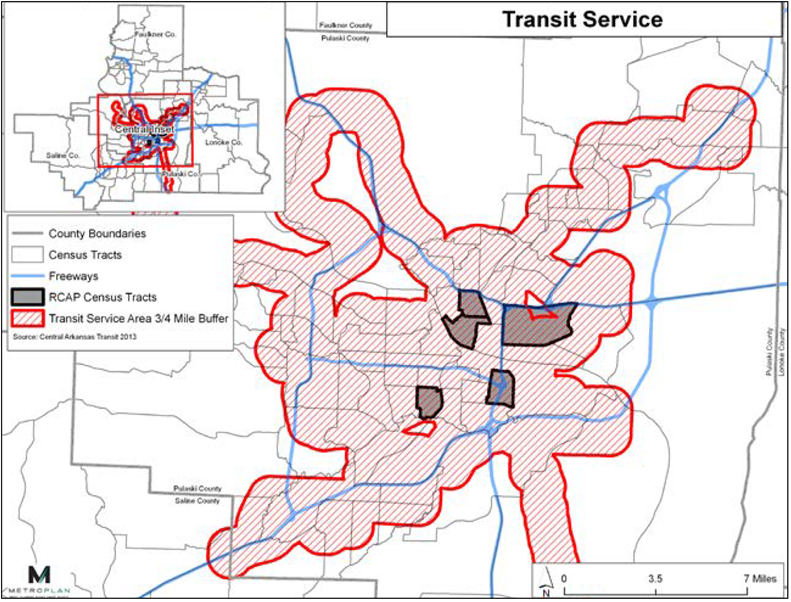 Note in Figure 3 that most of Little Rock is covered by transit assuming a 3/4 mile buffer from routes.  Even this is optimistic, given that bus stops occur infrequently along a bus route. Figure 4's optimism is stretched even further when data show that pedestrian is typically willing to walk 1/4 or 1/2 mile to access transit (stop).

In any case, a user must travel from an origin to a bus stop and from a bus stop to a destination, typically by bike or on foot.  This "last mile" challenge is common for transit systems, but underscores the importance of bike and pedestrian connectivity for a functional transit system. The fact that our transit system either has many more coverage gaps than suggested by Figure 4 or we are asking users to bike or walk farther than users are typically willing to do so means we must have stronger bicycle and pedestrian connectivity than the typical city.  In addition to a higher density of transit routes and stops, users will be willing to travel greater distances to access transit (and the transit system will be more viable and widely used) when coupled with more BikePed infrastructure, better quality BikePed infrastructure, and BikePed infrastructure that is better connected into a complete network connecting origins to destinations (Sections 5-7).