This page will consider the Evaluation and Planning aspects of LAB's Attributes of a Bicycle Friendly Community and especially Little Rock's 2016 LAB report card (Fig. 1). 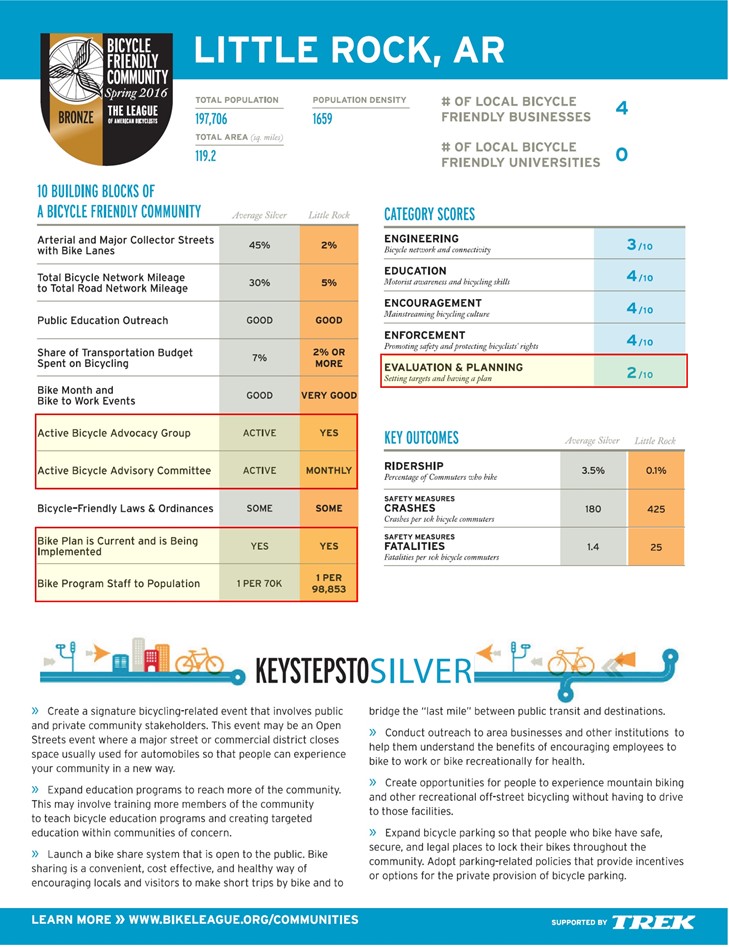 Master Bike Plan:  In the 1990s, the City of Little Rock created its first Master Bike Plan housed in the Parks and Recreation Department.  In 2011, the City Board of Directors adopted it into the Master Street Plan, making it official policy.  The Master Bike Plan is consulted when doing street projects and regularly updated; the last update was 2018.  In 2020, an outside consultant will make major revisions to it (see below).

Bicycle Friendly Community Committee: In 2006, a City Board resolution authorized the mayor to form the Bicycle Friendly Community Committee (BFCC) to advise the City to become more bike friendly.  The BFCC created the Master Bike Plan as it currently exists and evaluates the City's actions and inactions as they relate to a bike friendly Little Rock monthly.

CLR Land Use Plan:  Eleven of the 30 CLR Districts explicitly call for Complete Streets in our Land Use Plan.

Board of Directors “Must Do” Policies: Board Must Do Policies call to improve livability and quality of life.

Pop Up in the Rock:  2012 was the first of the annual Pop Up in the Rock events, in which volunteers demonstrate how an outside urban space could function differently.  These projects are typically transportation-related and often feature bicycles, combining Evaluation with Encouragement and Education.  For example, the 2019 Pop Up Southwest Little Rock event, located in a primarily Latino area of Little Rock, included a CALS bicycle workshop, a BACA learn to ride event, and a bicycle tour.  The 2012 Pop Up Main Street event inspired Little Rock's first road diet (Fig. 2)

Complete Streets Ordinance: In 2015, the City Board of Directors passed a Complete Streets Ordinance, considered by Smart Growth America as one of the best of 2015, requiring street design for all new, reconstructed, and resurfaced streets to be multimodal unless one of five exceptions is met.  The 2020 Master Transportation Plan will couple an implementation plan to this mandate.

Southwest Trail:  In 2016 and 2017, the City of Little Rock published corridor studies considering the Southwest Trail route from the Arkansas River Trail (ART) to the Central High National Historic Site.  In 2017, Garland, Saline, and Pulaski Counties together won a Federal Lands Access Program (FLAP) award to design and engineer the Southwest Trail from Hot Springs to Central High.  In the same application cycle, the City was awarded $1.6M from FLAP to construct Phase One of a connection from the ART to Central High.  In 2019, the City applied to FLAP for Phase 2; grant announcements have not yet been made.

Arkansas Bicycle and Pedestrian Transportation Plan:  In 2017, the Arkansas DOT published the Arkansas Bicycle and Pedestrian Transportation Plan.  While not a City of Little Rock effort, many Little Rock professionals contributed to it, it informs policy on the state highways that are also Principal Arterials in our street grid, and has outreach data (Appendix A) the City uses regularly.

Making Connections:  Bicycle planning in Little Rock has often been siloed, arguably to its own detriment.  Especially since 2017, the bicycle community has highlighted the connections between a bike friendly Little Rock and other interests.  In 2017, our bikeshare provider created a partnership with Rock Region Metro to ensure the system addresses the last mile problem; that partnership remains today.  In 2018, the City sought and was granted funding for the Friendly Driver Program through AARP's Community Challenge Grant because of the importance of safe bicycle transportation to aging in place. In 2019, studioMAIN/BACA presented to Rock Region Metro the importance of multi-modal transportation, the BFCC contributed to the Sustainability Commission's transportation goals (see below), and the Little Rock Convention and Visitors Bureau Gretchen Hall presented to the Little Rock Board of Directors the importance of welcoming bicycles to Little Rock's tourism (minute 15:15).

Scott Script:  Mayor Frank Scott Jr. won the election and took office in January 2019.  One of his first acts as mayor was to convene citizen committees to evaluate current conditions and plan key steps in his key agenda items.  The product of these committees was the Scott Script, which set aggressive goals for mobility, equity/inclusion, and quality of life.

Bike Boulevards:  In 2019, we started discussing bike boulevards as a bicycle connectivity and traffic calming solution (Fig. 3). While informed by the Bikeway Selection Guide as an inexpensive and effective intervention, it was also a response to a specific residential concern which may be a way to facilitate implementation.  studioMAIN will do a small-scale Pop Up event to demonstrate different traffic calming measures in 2020. 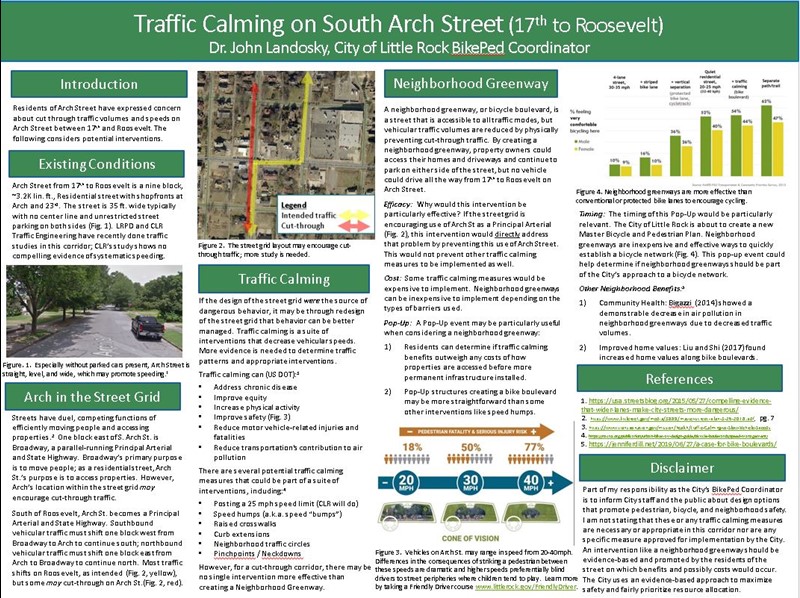 Figure 3.  Poster considering bike boulevards as a traffic calming solution on Arch Street.  A clearer version can be found here.

BFCC 2019 Goals:  In order to prepare the next iteration of the Road to 2020, the City of Little Rock Sustainability Commission asked the Bike Friendly Community Committee (BFCC) to consider transportation goals that would align with sustainability.  The BFCC adopted these goals to promote bicycling and transportation choice in Little Rock.

LAB BFC 2016 Feedback:  Starting in 2016, the City and the BFCC have been working with the League of American Bicyclist's 2016 Bicycle Friendly Community feedback (above) to follow its recommendations.  In January 2020, BikePed Little Rock began soliciting public comment on our efforts since 2016 to ensure its accuracy, make sure it is comprehensive, and promote the efforts we've been making.

Master Transportation Plan:  The City is currently in the selection process (RFP) to hire an outside consultant to make major revisions to our Master Bike Plan and revise the Master Street Plan as necessary to make it compatible with the new Master Bike Plan and the Complete Streets Resolution and Ordinance.  This new Plan will evaluate all currently proposed bike infrastructure for feasibility and propose a new, dense, context-dependent, low-stress bicycle network consistent with current guidance such as FHWA's Measuring Multimodal Network Connectivity (2018) and Bikeway Selection Guide (2019).  This plan and this process will help continue the shift to thinking of the bicycle as a transportation mode.

U.S. Bike Route:  As of February 2020, Arkansas has no US Bike Route, but work is underway to create a US Bike Route from West Memphis to Little Rock, taking advantage of the Big River Crossing (2016) over the Mississippi.