The City of Little Rock installed bike lanes on Van Buren between Markham and Kavanaugh between Nov. 28th and Nov. 30th 2017 (Figs. 1-4).  These bike lanes were installed in the context of a 2017 Street Resurfacing Project.

Figure 1.  The start of the bike lanes at the Markham/Fair Park/Van Buren intersection.  The corridor starts with sharrows because of the width required for the left turn lane onto Markham; bike lanes start immediately after A Street. 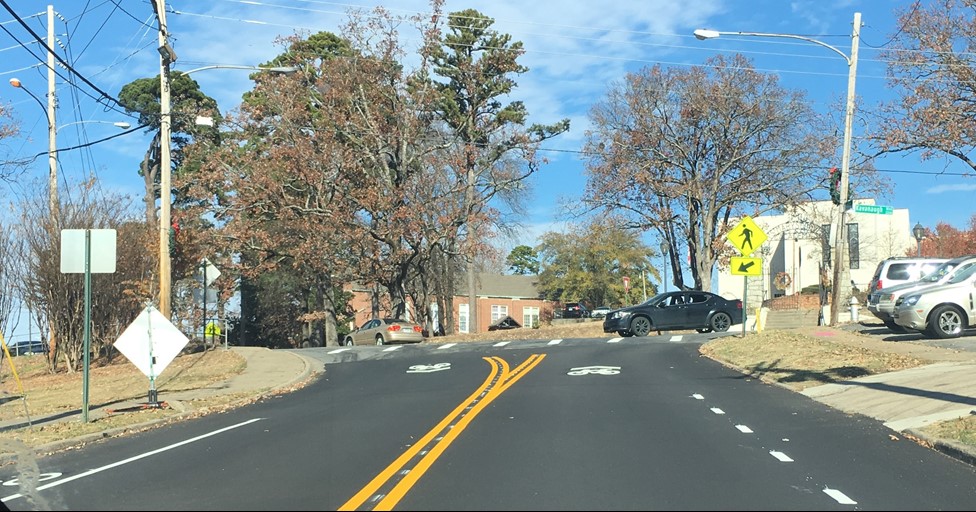 Why Bike Lanes on Van Buren?

While these bike lanes are not on the Master Bike Plan (Fig. 5), they serve two important connectivity functions.

Figure 5.  Van Buren (yellow highlight) is not on the Master Bike Plan, but connects the Fair Park bike lanes to the Kavanaugh sharrows.

W. Markham St. is a formidable crossing barrier for people using our street network on bike.  It is a four lane, high speed, high traffic count street (21,000 ADT close to the Markham/Van Buren intersection) with rolling hills that obscure motorist sightlines and few traffic lights to slow traffic or facilitate crossing (Fig. 6).  W. Markham presents such a challenge for bicycle connectivity that our Master Bike Plan proposes few crossings, and most of the proposed crossings are arguably dangerous (Fig. 7).  New bike crossing signs on Markham at the Fair Park/Van Buren intersection increase the safety of this crossing (Fig. 8).  The installation of bike lanes on Van Buren creates only the second bike corridor to cross Markham/3rd in all of Little Rock (State St. has sharrows that cross 3rd St.).

Figure 6.  Markham is a dangerous street to cross on bike or on foot without a traffic light (Google streetview close to the intersection of Van Buren and Markham). 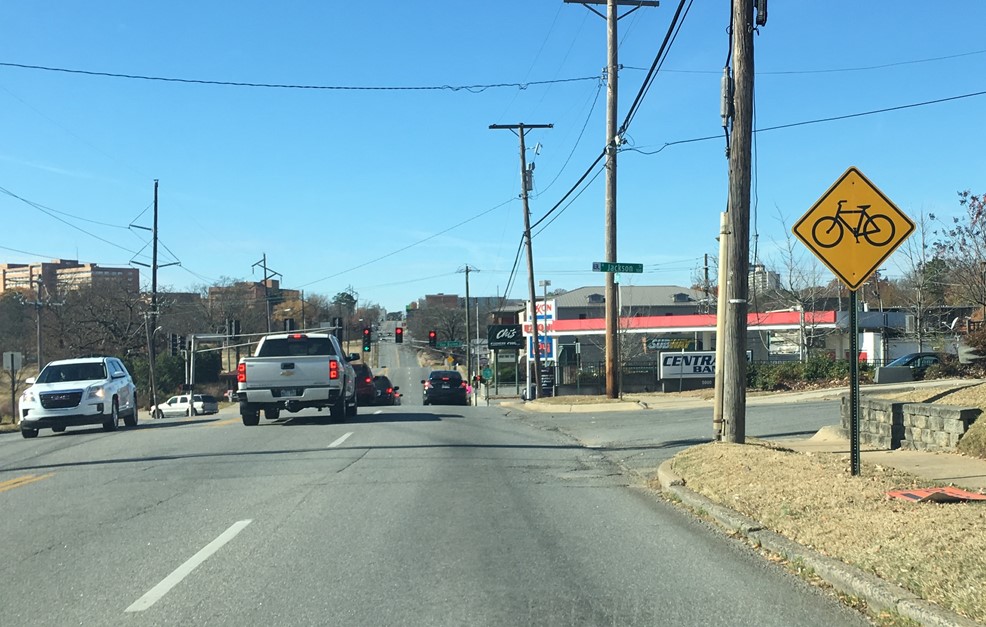 Connects Hillcrest and the Heights to the Midline

The proposed Midline is an ambitious set of projects to create an east west bicycle corridor actively sought since 2006.  Once created, the utility of the Midline will be amplified as quality connections are created to it.  The Van Buren bike lanes, in combination with the already installed Fair Park bike lanes and Kavanaugh sharrows, connect the Heights and Hillcrest to the Midline (Fig. 9). 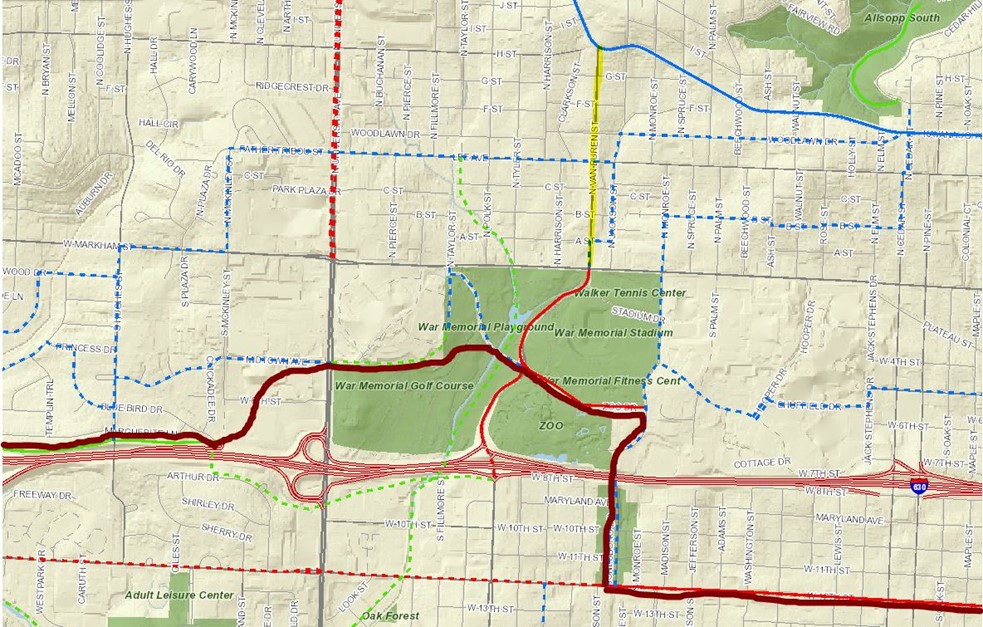 Like the Main Street and 12th Street projects, understanding how this facility was accomplished may inform future efforts to create bicycle facilities.  While the Main St. project was largely business district-driven, and the 12th St. project was largely BFCC-driven, the Van Buren project was largely City staff-driven.  Little Rock's Bicycle and Pedestrian Coordinator has the opportunity to review resurfacing projects and consider how those streets might contribute to our bicycle network.  Van Buren was on the list of 2017 Resurfacing Projects.  Reviewing Van Buren St., I saw a clear need for bike lanes for the reasons discussed above.  Public Works and Traffic Engineering City staff discussed the project and saw little controversy, cost, or conflicting needs.  The number of vehicular lanes weren't decreasing, vehicular lanes were just getting narrowed to a 10 ft. width more appropriate for the street type.  Street parking wasn't being taken away; no parking was allowed on the street prior to the bike lane installation.  City staff made the call and installed the lanes.

So what can we learn from this process?  This is my takeaway.  City staff may be able to install bicycle facilities without outside influences under a certain set of conditions: