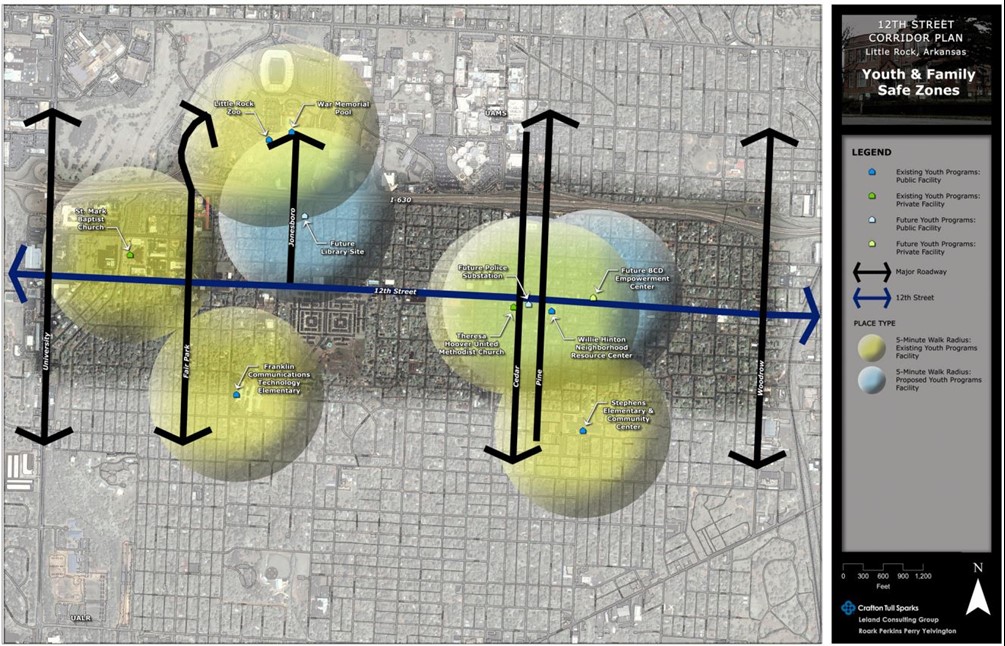 Road diets can improve safety, calm traffic, and make streets more accommodating for all modes of transportation (walking, driving, biking, transit, and emergency vehicles), which is why US DOT/FHWA is encouraging their implementation, especially on four lane roads meeting certain criteria.  Road diets increase pedestrian comfort by increasing the distance between sidewalks and moving cars and make roads safer to cross by decreasing the number or vehicular travel lanes and create a dedicated space for bicycles (Figs. 2 & 3).  While study after study confirms the safety benefits of road diets for all road users, Figures 2 and 3 can also be illustrative.  Which street would you rather cross on foot?  On which street would you rather ride a bicycle?  On which street does it look like you should drive faster/more aggressively?  Along which street would you rather let your children play?

Road Diet Serves the Corridor As It Exist Now

Many of the households who live within the Corridor are African American and have low incomes (Fig. 4).  African Americans are three times more likely to be hit by a car than when riding a bike and 3.3 times more likely to be hit by a car when walking than whites in Central Arkansas (Fig. 5).  The reasons for this dramatic disparity are likely complex, but one reason may be that bike and pedestrian facilities are more often located in high-income, predominantly white communities than in low-income communities, predominantly African-American communities.  The 12th St. road diet was an opportunity to increase the equity of bike and pedestrian accommodations in Little Rock. 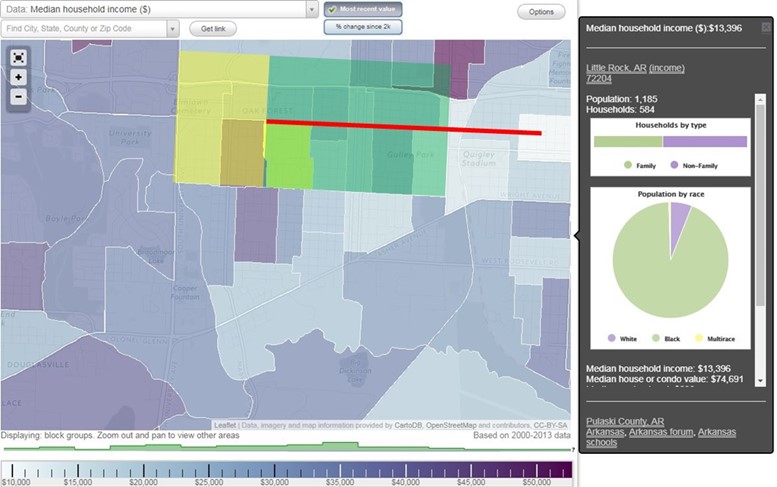 Figure 4.  The Corridor where the road diet (red line) was implemented (green box) and where it wasn’t implemented (yellow box) superimposed on a demographic map of race and income.  Map from city-data.com. 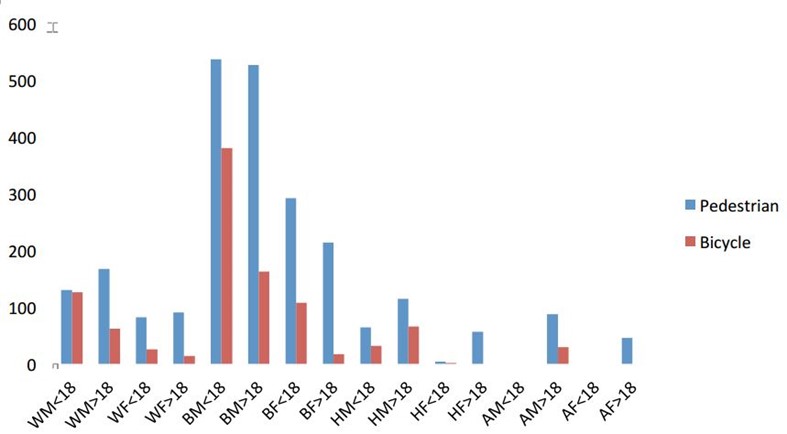 Another reason for this racial disparity may be the link between race and income.  People with lower income more often walk and bike as transportation necessities.  Many families in the Corridor cannot afford one or more cars (e.g. the average household income in one sampling unit of the Corridor is $13,396/year (Fig. 4) and the average annual cost of car ownership is $9,000/year).  Accommodating bicycle and pedestrian mobility allows safe, independent movement within the Corridor and access to transit to move in and out of the Corridor (Fig. 6). 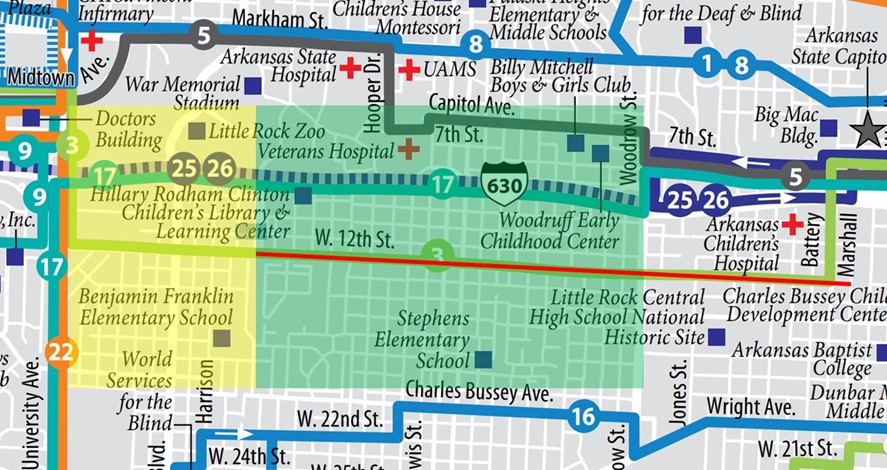 Road diets can spur economic development and can be an important part of revitalization of an area.  This project was motivated by the desire for both Corridor revitalization and regional bike mobility.

We have a small (but growing) number of bike commuters, in part, because we do not yet have a connected set of bike facilities that encourage ridership (Fig. 7).  We know from the experiences in other communities and local polling data that we have a tremendous latent demand for the bicycle as a mode of transportation.  An east-west connection has been particularly sought after because of a concentration of jobs in downtown Little Rock and a concentration of residences in west Little Rock.  At the time the 12th St. road diet was implemented, it was the longest, most ambitious project to create on-street bike connectivity for bike commuters. 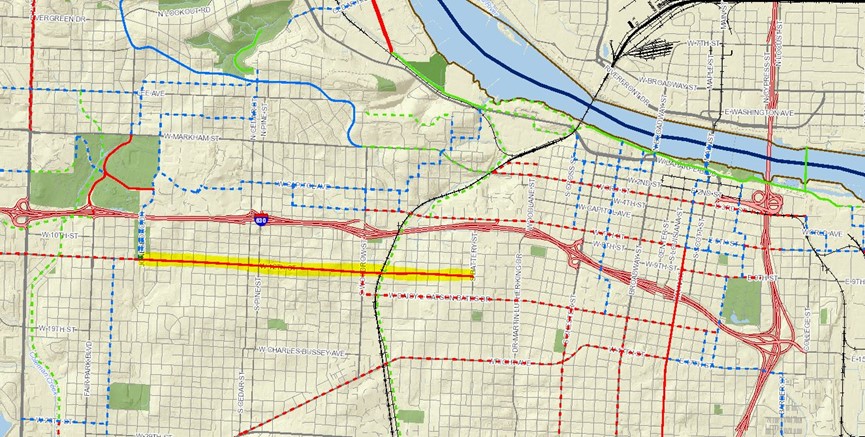 Figure 7.  This present-day map of the proposed (dashed) and installed (solid) Master Bike Plan shows the importance of 12th St. (highlighted yellow) as an important east-west bike connector and that we still have work ahead to implement bicycle connectivity.

The 12th St. road diet has always been intertwined with on-going efforts to revitalize the Corridor.  Soon after the Bicycle Friendly Community Committee (BFCC) was formed by the Mayor in 2006, it recognized the importance of a continuous east-west corridor (a facility still sought, Fig. 8).  In 2007, the BFCC and the City identified 12th St. as an opportunity to create part of that connectivity through a road diet (Fig. 8).  An internal Public Works document confirmed that a road diet was appropriate for some of 12th St., but traffic volumes were too high immediately east of University Ave. (Fig. 8).  In 2013, Mayor Stodola discussed the road diet in a larger context of 12th St. revitalization in his State of the City Address (Fig. 8).

Figure 8.  A timeline of the events leading to the 12th St. road diet implementation.  A special thanks to BFCC Voting Member Ken Gould for compiling this history.

The City of Little Rock hired Crafton Tull Sparks Associates to advise and help develop a 12th Street Corridor Plan.  The City held public meetings to elicit public opinion on the 12th St. road diet and revitalization on 7/28/08 and 11/20/08 (Fig. 8).  In January 2009, Mayor Stodola requested the BFCC prioritize the 12th St. road diet and the I-630 trail in an effort to obtain economic stimulus package funding for the projects (Fig. 8).  On May 7, 2009, the City held another public meeting to update the public on progress to date and on 12/10/09, the City presented its final plan for the first phase of 12th St. revitalization (Fig. 8).

Since the road diet was implemented, revitalization efforts continue on 12th St.  The Little Rock Police Department opened the doors to their new 12th St. Station on 9/25/14.  Part of the Corridor was awarded Metroplan Jump Start Initiative funding, a community-led process to revitalize the 12th St. Core.

The 12th Street road diet is done.  Why spend time considering how or why it was accomplished?  While the 12th St. road diet did great things to increase age, race, and income equity in the 12th St. Corridor, promote continuing revitalization in the Corridor, and facilitate bicycle transportation in the City, these continue to be important goals in Little Rock as a whole.  Understanding how a road diet can affect neighborhoods and our city-wide transportation system is important to motivating future improvements.  Understanding the process through which the changes took place can help build a blueprint for future efforts.

What are your takeaways from this process?  Do you have any additional history of 12th St. to contribute?  Contact us.