Where would this trail be?

The Markham BikePed Trail would be built along the north side of Markham between Boone and Woodrow Streets (in front of Arkansas Schools for the Blind and Deaf, Fig. 1).  More specific plans have been drafted for its specifications and path along this route, but these may change because the City is still working with landowners to obtain easements.

Why create a trail here?

The East-West Connectivity Problem
East-West bicycle connectivity from downtown to Hillcrest, Stifft Station, and the Heights has been particularly challenging.  There are currently only three East-West routes between the Arkansas River and I-630 that cross the Union Pacific tracks and allow connectivity for bicyclists and pedestrians, LaHarpe Blvd., 3rd St. and 7th St. (Fig. 2).  LaHarpe Blvd. is a state highway with high traffic speeds and volumes and no bicycle facilities (though the Arkansas River Trail is temporarily routed along the sidewalk of the LaHarpe bridge on its sidewalk).  Third Street is the best connection of the three spatially, but has high traffic volumes and speeds at certain times of the day and no bicycle facilities.  Seventh Street has the lowest traffic volumes and speeds of the three, but it is not ideally positioned to connect Hillcrest to downtown.  A fourth BikePed connection will be built by Spring 2017, a BikePed bridge between LaHarpe Blvd. and the Arkansas River. 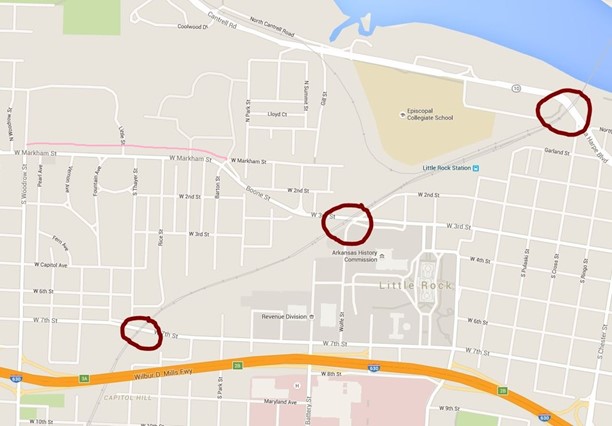 Figure 2.  Red circles are the three existing BikePed crossings over the Union Pacific tracks.  The pink line is the proposed Markham BikePed Trail.

The Markham BikePed Trail and East-West Connectivity
The Markham BikePed Trail could help East-West connectivity in two ways.  First, it could increase the safety of the 3rd Street connection. From downtown, a bicyclist could ride down 3rd Street to cross the Union Pacific tracks, but then turn onto Boone St. and then the Markham BikePed Trail to get off of Markham between Boone and Woodrow Streets (Fig. 3, blue route).  Of course, this does not make 3rd Street a friendly route for cyclists; this would still be high traffic, high speed vehicular corridor with no bike facilities beyond the trail.  However, Markham has a long hill just after Boone St. and it would be better for both traffic modes to separate them here. 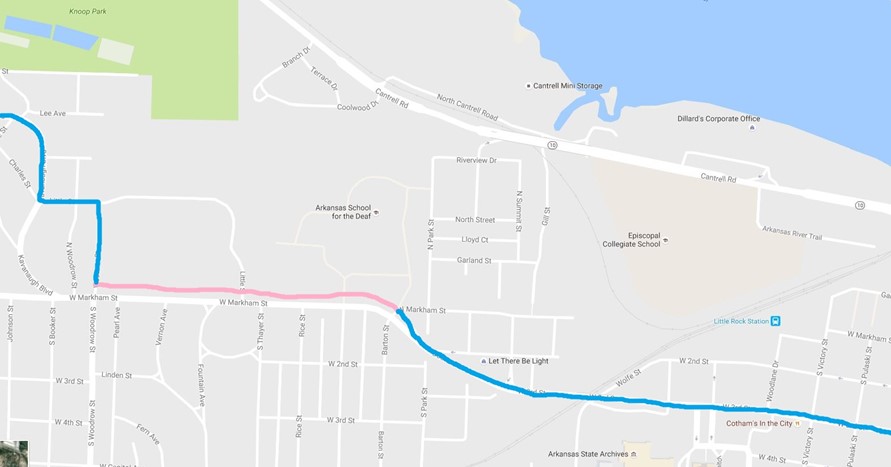 Alternatively, if a rider was uncomfortable riding on 3rd St., she could ride the Arkansas River Trail, crossing Union Pacific tracks at the LaHarpe Bridge before Spring 2017 and the BikePed bridge after Spring 2017.  After passing the West Terminus, a bicyclist could cross under Cantrell Rd and ride Gill St. to Garland St., Garland St. to Park St., Park St. to W. Markham St. (residential section), and W. Markham St. to the Markham BikePed Trail (Fig. 4, orange route).  This would have the advantage of avoiding 3rd St./Markham altogether, but may not be as direct a route and, from downtown, the rider would have to ride up a steep hill on Garland. 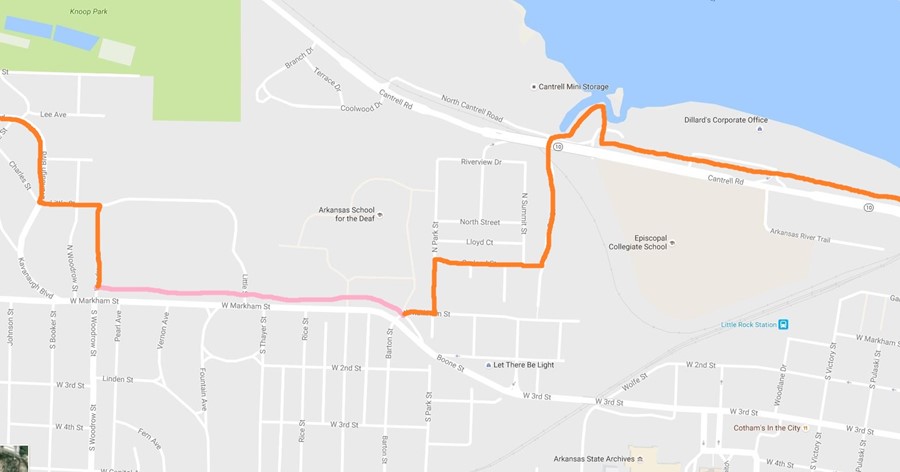 The connection from the the Markham BikePed Trail to Kavanaugh Blvd. is not yet fully developed conceptually, but may be Woodrow St. to Little St. to Kavanaugh Blvd.  If completed, this could be an important piece to the puzzle of solving East-West connectivity for bicyclists between I-630 and the Arkansas River.

Status
Ward 3 Director Kathy Webb has secured funding for the project, but the city is still in the process of getting easements from the schools.