A bike connection from Hillcrest and the Heights to downtown has been a challenge for some time.  The Arkansas River Trail via Cedar Hill (Hillcrest) and via Overlook (Heights) are options, but these may not be a direct routes for some commuters and both include a hill that may be too steep for some commuters.  Riding 3rd St./Markham to Kavanaugh is another option, but only the most hardened commuters will ride on 3rd Street in its current four-lane configuration.

The Midline will create a new option to make this commute, but in order to use the Midline to/from Hillcrest and the Heights, a bike commuter must cross Markham.  Markham is dangerous to cross without a signalized intersection, and few traffic lights are accessible by bike north and south of Markham between downtown and I-630 (Figure 1).  Creating bike facilities on Van Buren and Kavanaugh would create a critical bicycle connection across Markham (Figs. 1 & 2).   People on bike and on foot could cross Markham at the Fair Park traffic light.  This would create an important access point to the Midline and make it a more usable and used route. 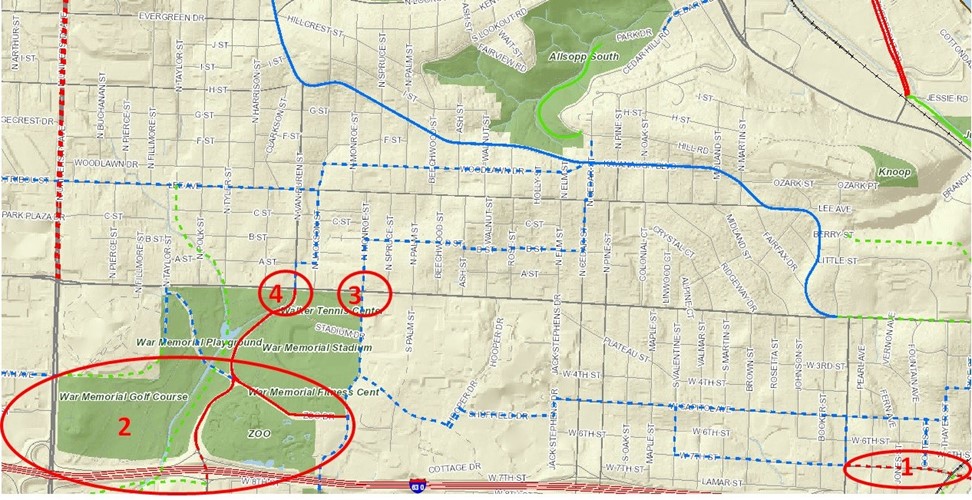 Figure 1:  Markham is a formidable barrier in the range of this map and beyond for people using our street network on bike or on foot.  #1 Even if we establish an east-west corridor from Main St. to Woodrow on 7th St. (connecting Stifft Station to downtown), there is no connection with bike lanes to get north of Markham.   #2 We are working to create the Midline approximately along the I-630 corridor.  The utility of this connection would be increased if BikePed traffic could get north of Markham.  #3 The Master Bike Plan has a proposed sharrow crossing Markham at Monroe St.  This is an unsignalized intersection and, in my view, a terrible idea.  I would strike this from the Master Bike Plan.  #4 The intersection of Fair Park/Van Buren is a critical BikePed connection across Markham because of the bike lanes on Fair Park, the connection to the proposed east-west connection (#2), and because of the lack of alternative Markham crossings.  Continuing the bike lanes on Van Buren would make this a more straight-forward and used connection to Hillcrest and the Heights. 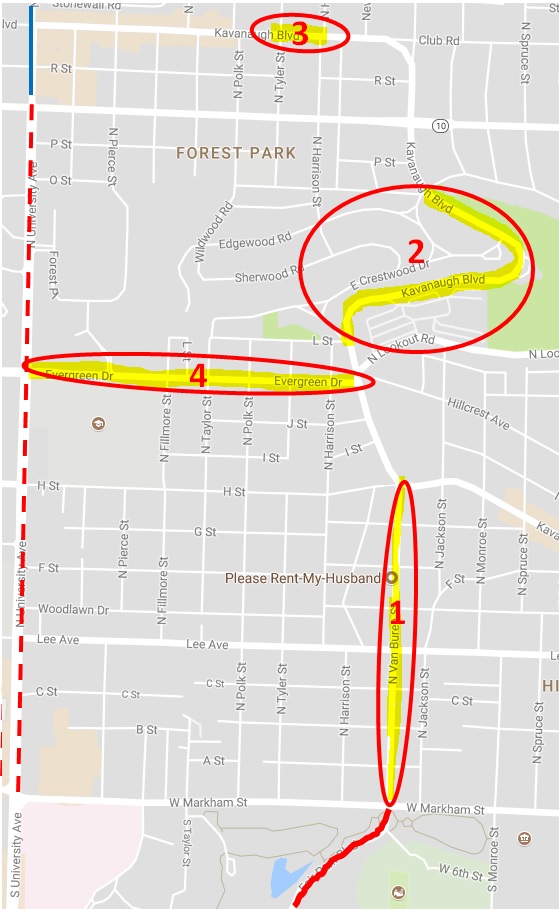 Figure 2.  These are the elements required to create better bicycle and pedestrian connectivity from the Heights to the Midline.  The discussion below will follow this figure.

Fifteen foot wide vehicular lanes (with no street parking) are too wide for a 30 mph street and can result in excessive speeds and higher than necessary collision frequency and severity.  20.8% of the vehicles in LRPD's August 2017 study were speeding (Fig. 3).  Speeding vehicles, a double yellow line, and the confluence of topography and non-separated facilities makes this an unwelcome street for bicycles. 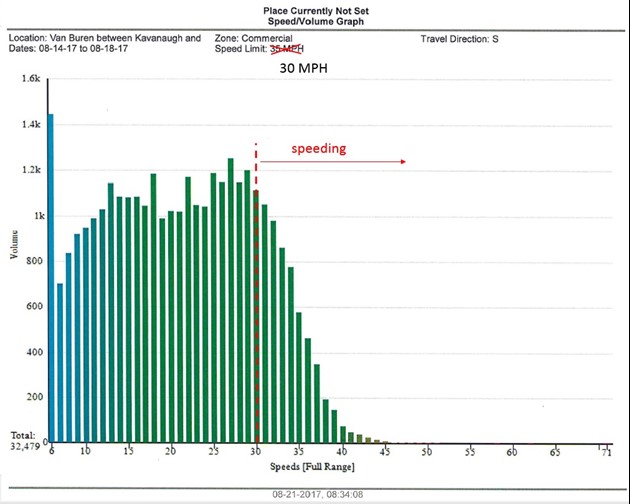 Figure 3. Histogram of vehicle speeds on Van Buren collected by LRPD in August 2017.

Kavanaugh Blvd. between "L" and Crestwood St. is a 40-42 ft. wide street with two travel lanes (15-16 ft. wide) and two bike lanes (5 ft. wide).  The ADT is 7,900.  It has no sidewalks.  Sidewalks would be expensive to install given topography and obstructions immediately off of the pavement (utility poles, stone walls, and slope). This is a poorly designed street segment for all users in its current configuration.

Motorists
The wide lanes induce speeding by motorists on a section of road with sharp, sloped curves.  The topography can contribute to motorists not seeing how sharp or how many degrees the turns are until they are in a dangerous situation.  Motorists can and do regularly lose control of their vehicles when speeding around the curve.

Bicyclists
In theory, bicyclists have five foot bike lanes on either side of the street.  In practice, these bike lanes are regularly encroached with dirt and vegetation and have vegetation growing through the pavement (especially in the downhill bike lane).  This can cause the loss of control on a street that has no shoulder in which to spill, causing the person on a bike to fall into the street, into the bike lane, down the slope of the hill, into a brick wall, etc.

Pedestrians
There are no facilities for pedestrians.  The street has no shoulder that would allow a pedestrian to walk to the side of the street.

Narrow Vehicular Lanes
Vehicular lanes could be narrowed to 10-11 ft. wide throughout this section except where the curve of the street requires a wider lane so that freight trucks and buses can stay in their own lanes.  Narrowing the lanes on the approach to this curve in both directions will slow traffic and make negotiating this curve safer for drivers (and other traffic modes).  NACTO states that 10 ft. travel lanes are ideal for traffic calming.  Twelve foot travel lanes are typical for highways and would likely not calm traffic as needed here.

Install Better Facilities for Bicycles and Pedestrians
Public Works has been considering options for this corridor to increase the safety and comfort of all traffic modes.  If this is a facility you would like to see completed, consider requesting funding for this project.

Kavanaugh between Newton and Polk narrows to approximately 29-30 ft. (Fig 3).  Eastbound and westbound lane widths are not the same.  The westbound lane is as narrow as 9.5 to 10 ft. wide to provide a wider eastbound lane, presumably to facilitate an eastbound bus route. There is no curb and gutter in the block and a half that is 29 ft. wide.

The presence of a sharrow in a lane as narrow as this coupled with a double yellow line is concerning.  It encourages drivers to pass cyclists too closely.

Widening this section of Kavanaugh to match the width before and after it would make a sharrow safer and this corridor more bike-friendly.  If this is a something you would like to see completed, consider requesting funding for this project.

Figure 3.  The confluence of a narrow lane and a double yellow line is concerning on a bike route.

Evergreen Drive would be an excellent candidate for bicycle lanes connecting the proposed bike lanes on University with the improved bicycle corridor on Kavanaugh.  The hilly nature of Evergreen makes the speed differential between cars and bikes greater and decreases sight-lines, making bike lanes even more important on this street.  Bike lanes would create a safer route to school for Forest Heights students.  The street is wide enough for bike lanes between University and N. Fillmore St. but becomes too narrow between Fillmore and Taylor.  Sharrows may be the best bicycle facility that can be installed on this street without widening it.

If this is a facility you would like to see completed, consider contacting CLR Public Works (PublicWorks@littlerock.gov), cc: jlandosky@littlerock.gov and request that sharrows be included on the 2017 resurfacing of Evergreen Drive.