Yes, the Kanis Park Loop (Loop) will create a stand-alone, 14 ft. wide recreational trail loop around Kanis Park. But the Loop will also connect to, and be a part of, the Tri-Creek Greenway and the Central Arkansas Regional Greenway (Fig. 1).  This is why portions of the Kanis Park Loop are described in these two trail networks as well as the Master Bike Plan, Master Trail Plan, Midline, Little Rock Trail Corridors (Fig. 2), and the Complete Streets Bicycle Plan (pg. 90). 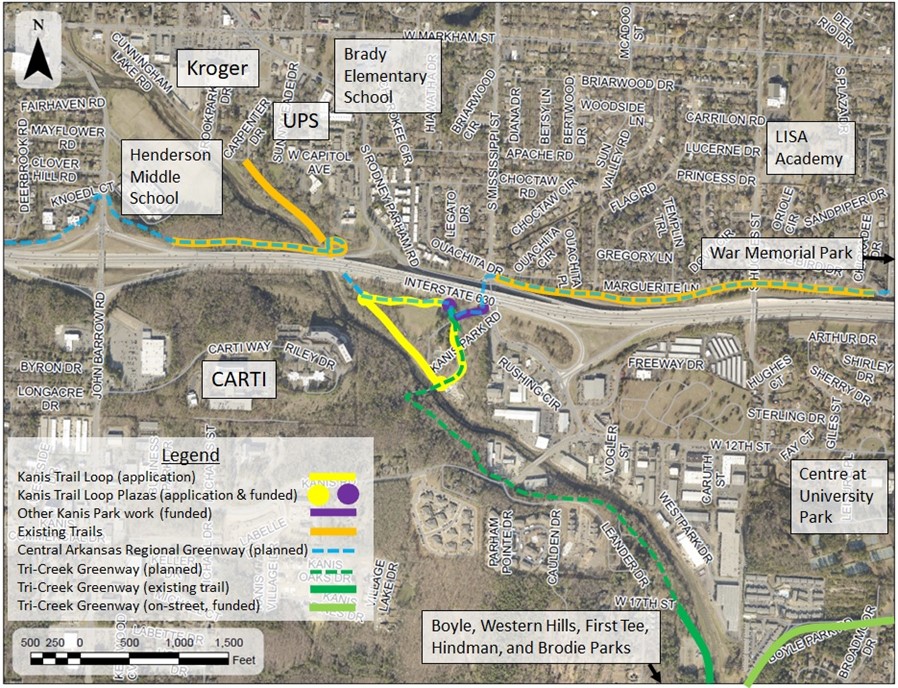 Figure 1. Unlike a typical park trail loop, the Kanis Park Loop will serve as portions of two regional trail networks.

The City of Little Rock has already committed $1.5 million for Kanis Park improvements (Fig. 2). We will rebuild the popular basketball courts under I-630 (removed during I-630 expansion). We will build a 14 ft. wide trail from the southwest corner of Rodney Parham Rd. and Mississippi St. into the park entrance, across a new multimodal bridge, and arrive at a new plaza on a corner of the northern-most parking lot. These improvements will happen regardless of RTP funding, but the Kanis Park Loop would leverage and expand these efforts. 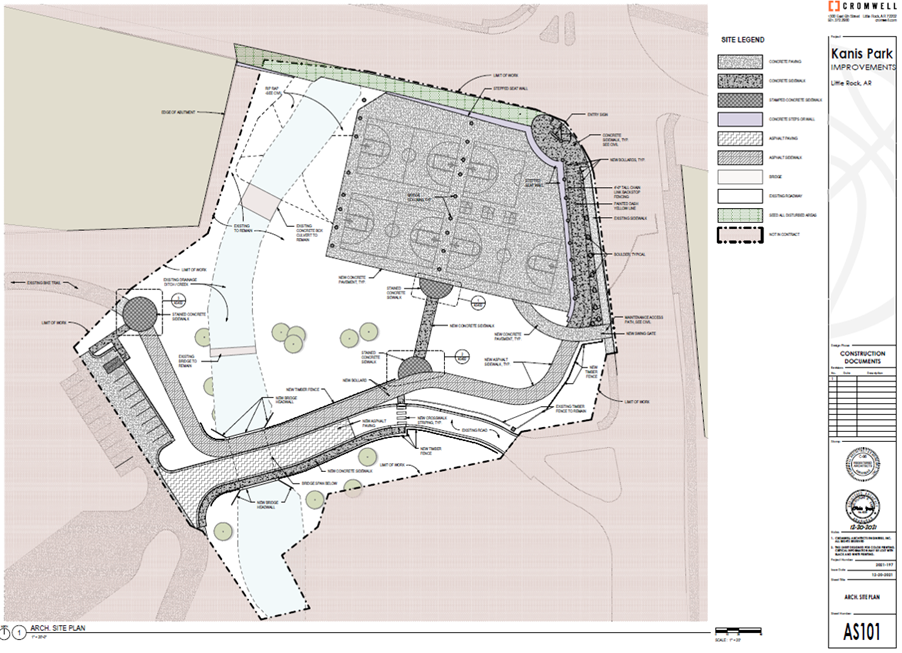 Figure 2.  This is an overview of the work the City will do for Kanis Park.

The Three Legs of the Kanis Park Loop

North Leg: The Loop's North Leg would start at the funded plaza terminus and remove an existing, dilapidated 8 ft. wide, 900 lin. ft. long trail that runs along the northern edge of Kanis Park's baseball field, and replacing it with new, safer 14 ft. wide asphalt trail. This leg will also function as part of the main corridor of the Central Arkansas Regional Greenway (Fig. 3).

West Leg: From this point (NW corner of Park), the West Leg of the Loop would run southeast, parallel to Rock Creek, west of the baseball field and the pickleball courts (Fig. 3). Like the North Leg, the West Leg will remove existing 8 ft. wide, 1100 lin. ft. long trail in disrepair and replace it with new, 14 ft. wide asphalt trail. This portion of the trail would serve to connect eastbound Central Arkansas Regional Greenway users who seek to go south via the Tri-Creek Greenway or northbound Tri-Creek users who seek to go west via the Regional Greenway.

East Leg: From this point (southern-most point of Loop), the East Leg would run due west, just north of the skate park, then north, running between the parking lot and the new accessible playground, creating a new 14 ft. wide trail corridor leading back to the aforementioned plaza and completing the loop. This portion of the Loop would also function as part of the main corridor of the Tri-Creek Greenway.

Plazas: This project would also create two new concrete plazas at the northwest and southern corners of the triangular loop, with 15 ft. and 20 ft. radii respectively. Plazas are located at regional trail intersections to allow for rest and wayfinding. Plazas will include three benches each and a fix-it station. 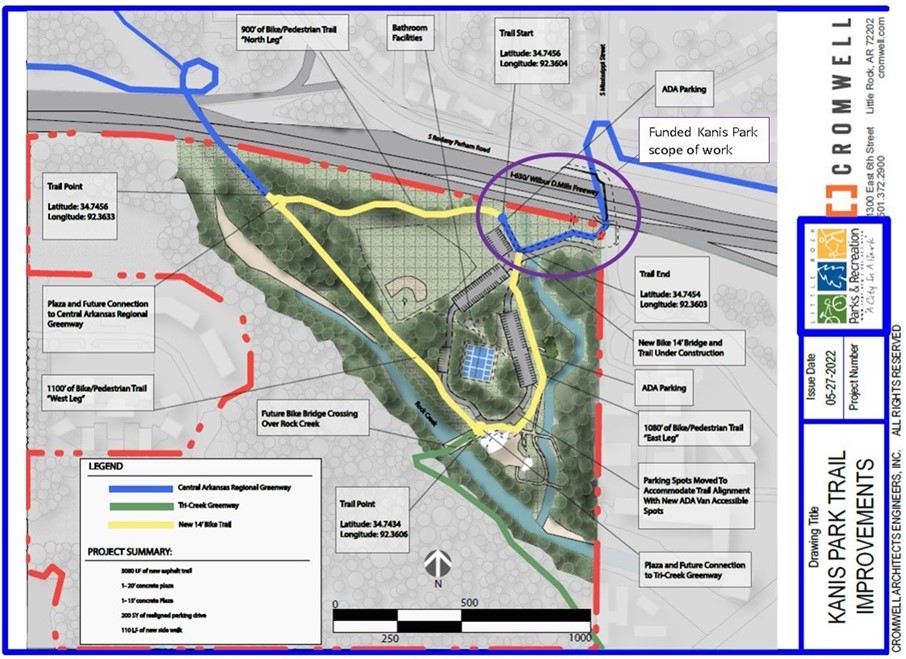 The Kanis Park Loop would provide a 0.58 mile loop around Kanis Park for health and recreation. It would provide pedestrian accessibility to Kanis Park amenities including new basketball courts, a baseball field, new pickleball courts, a skate park, and a new handicapped-accessible playground. It will also serve a transportation function by serving as portions of the Tri-Creek Greenway and the Central Arkansas Regional Greenway and a trailhead with ample parking for both greenways.  The Kanis Park Loop would have particular benefits to some important groups in Little Rock.

Low Income Residents: This area has a low income (median household income: $35,932/year; 22.3% of residents fall below the poverty line). Residents of impoverished neighborhoods are at increased risk for mental illness, chronic disease, higher mortality, and lower life expectancy. Low income residents are also challenged by transportation limitations. The Kanis Park Loop will serve physical and mental health equity by creating a recreational park loop within walking or biking distance to this community.

Physically Disabled Residents: Kanis Park's new accessible playground is an important asset (Fig. 4). The City's funded Kanis Park improvements will include new sidewalk, ADA ramps, and a new handicapped parking space in the north parking lot (2 existing + 1 new spots). However, it would be the RTP-funded Kanis Park Loop that would make Kanis Park a destination for physically disabled residents. Disabled residents have limited public spaces where trails and sidewalks are adequate for their mobility. Even in parks with trail loops in good condition, many of these paved trails are 8-10 ft. wide. This width is not sufficient to allow someone with a mobility device to move side-by-side (socially) with a companion (able-bodied or not) while allowing enough space for someone to move past going in the opposite direction. This 14 ft. wide loop (along with 2 additional handicapped spots (5 total), and a new sidewalk from the Loop to the restrooms) would provide a unique opportunity for Little Rock's physically disabled community.

School Age Children: The Kanis Park Loop will not immediately create Safe Routes to Schools, but as a portion of the Tri-Creek Greenway, will create Safe Routes for Western Hills, Meadowcliff, Bale, and Romine Elementary Schools, Henderson Middle School, and Parkview Arts Science Magnet High School. It will connect to even more schools as portion of the Central Arkansas Regional Greenway. Of particular note is Henderson Middle School, which is all but connected to the Kanis Park Loop via an ARDOT paved trail and bridge over Rock Creek. 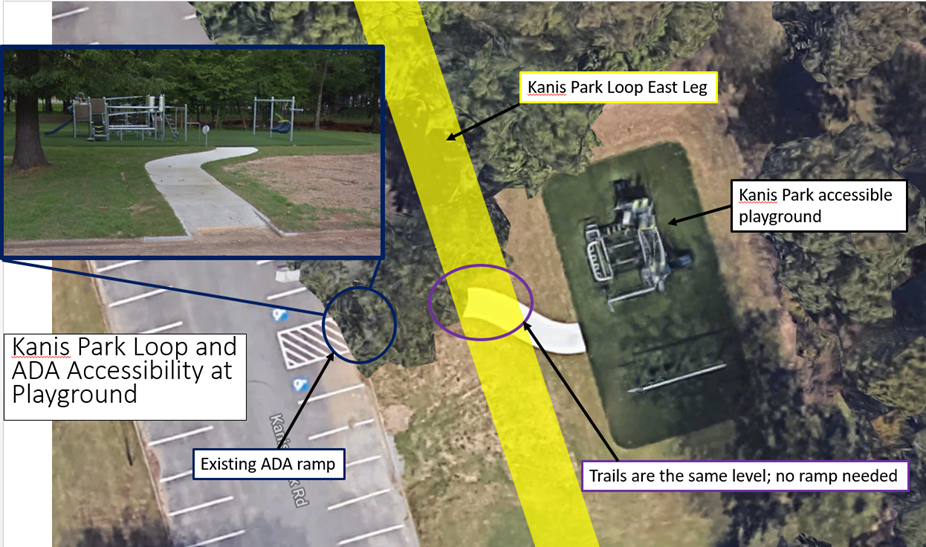 Figure 4.  The East Leg of the Kanis Park Loop would run between handicapped parking and the accessible playground, allowing easy access to both.