In 2018, the City of Little Rock resurfaced Pleasant Forest Dr. from N. Rodney Parham Rd. to Hinson Rd.  The corridor has had some issues with speeding, which is why small roundabouts and medians were installed in an earlier project.  Wide lanes encourage speeding and decrease safety.  In the context of the resurfacing project, bike lanes were considered as a type of road diet which tends to increase safety for all road users and residents, in this case by reducing speeds on this street.  Ultimately, local residents determined that they didn't want to lose street parking and fog lanes were installed instead.  Fog lanes and street parking are also mechanisms of traffic calming.

The following page is an archive to inform future projects.

Speeding has been a major problem on this residential street.  The City responded to residents demands to calm traffic by installing traffic calming structures in 2006 (Fig. 1).  These structures have helped the worst of the speeding (Fig. 2), however even though motorists must slow down for these structures, the wide, straight 16+ ft. lanes continue to encourage speeding between structures (Fig. 3).  Narrowing the vehicular travel lanes with bike lanes has been proven to help moderate speeds and would help discourage speeding between structures (Fig. 4).

Figure 1. Intermittent islands in the middle of Pleasant Forest Dr. force drivers to slow down at those points, but extremely wide lanes (see car in the distance) continue to encourage speeding between structures.  For reference, interstate highway lanes are typically 12 ft. wide.

Figure 3.  The distances between the installed traffic calming structures allows vehicles to accelerate between them; wide travel lanes encourages that behavior. 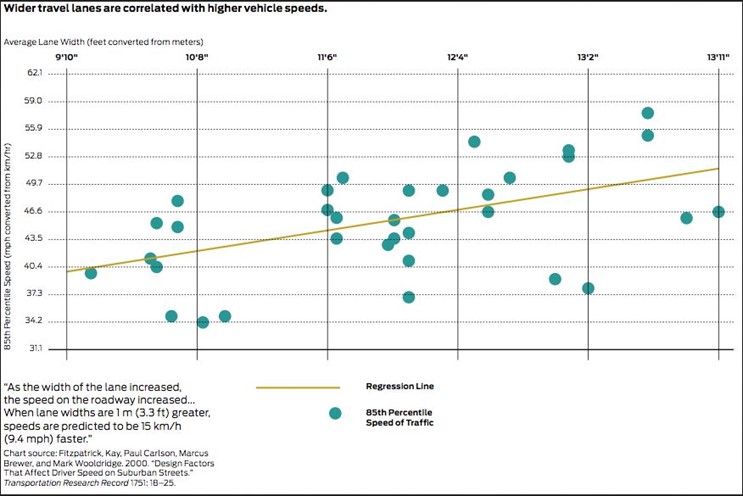 The vehicular lane currently extends all the way to a shallow curb (Fig. 1).  A moment's inattention could result in a motorist leaving the roadway onto residential lawns or striking a mailbox.  This is a particular concern for residents (especially children) on the north side of Pleasant Forest who have no sidewalk or greenspace between their lawn and the roadway (Fig. 1).  A bike lane would create 5-7 ft. of buffer, decreasing the risk of a motorist driving over the curb.

Bike lanes would create access from homes and side streets along Pleasant Forest to our on-street bike network on N. Rodney Parham and eventually Taylor Loop Rd. and ultimately to the Arkansas River Trail for recreation or as a transportation corridor.

The disadvantage of bike lanes on Pleasant Forest Dr. is the loss of street parking.  While street parking is uncommon on this street because homeowners have and use driveways, there are times that homeowners do take advantage of street parking (e.g. gatherings and lawn services).  When parking needs exceed the space available in driveways, cars would have to park one of the 22 side streets along the 1.66 mile Pleasant Forest Dr. and walk along the sidewalk to access houses.

Moderating speeds is good for residents, but its also good for the safety of people walking along Pleasant Forest Dr.  Higher speeds decrease what drivers see on the edges of the street; slower vehicular speeds increase the visibility of pedestrians and time for drivers to react to their movements (Fig. 5).  These effects will decrease the chance of collisions.   The effect of even a modest reduction in speed can decrease the severity of a collision with a pedestrian (or bicyclist or resident) (Fig. 6).

Figure 5.  As drivers go faster, they focus farther ahead to adjust their reaction times potential conflicts.  This change of focus decreases awareness of road users on the periphery and outside of the roadway (bicycles, pedestrians, and residents).   Image from lgc.org. 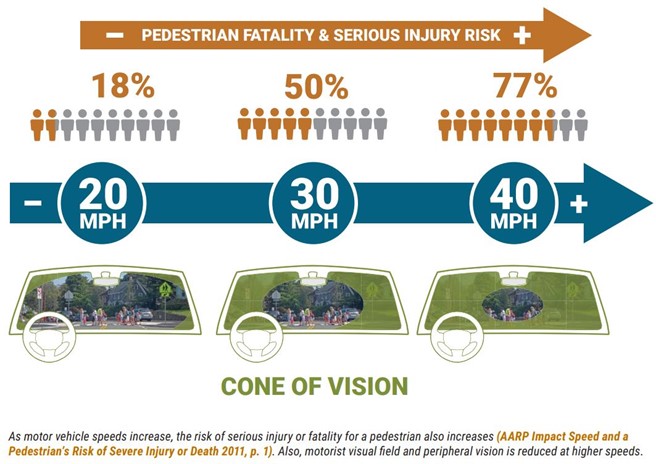 Figure 6.  The effect of a collision with a vulnerable road user (bicyclist, pedestrian, or neighborhood resident) differ dramatically between a vehicle moving 20 mph vs. 40 mph.

Increase Distance between Vehicles and Sidewalk

Pedestrians are at most risk when crossing vehicular travel lanes.  With the current striping, that means that pedestrians are at risk when crossing the entire 34+ ft. wide street.  Street crossing can be particularly dangerous when hills or curves in the road prevent long sight lines for drivers and pedestrians.  Bike lanes will narrow vehicular lanes and thereby reduce the at-risk walking distance to cross the street.

Arkansas is the most physically inactive state in the nation and the third most obese.  For this and other reasons, encouraging ridership for recreation or transportation is good for our community.  Creating a dedicated space for bicyclists on the roadway increases safety and encourages ridership (Fig. 7). 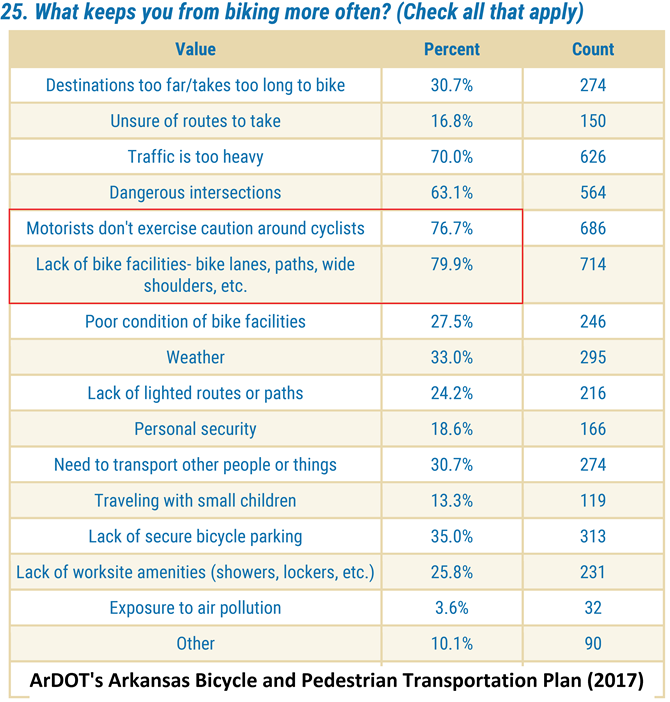 Bike lanes are much more useful and used when they connect origins to destinations.  A connected bike network is most used when it provides multiple ways for people on bikes to access destinations (PBIC May 2017).  The N. Rodney Parham bicycle corridor and the Taylor Loop Connection are two important ways for west Little Rock residents to access the Arkansas River Trail (Fig. 8).  Connecting these two corridors makes each, and the bike network as a whole, more useful.  Additionally, Metroplan's Regional Bike Network, to be included in the next iteration of Imagine Central Arkansas, will run on Taylor Loop then west along Cantrell Rd. (Fig. 8).  Creating connections to this regional network is important for its use. 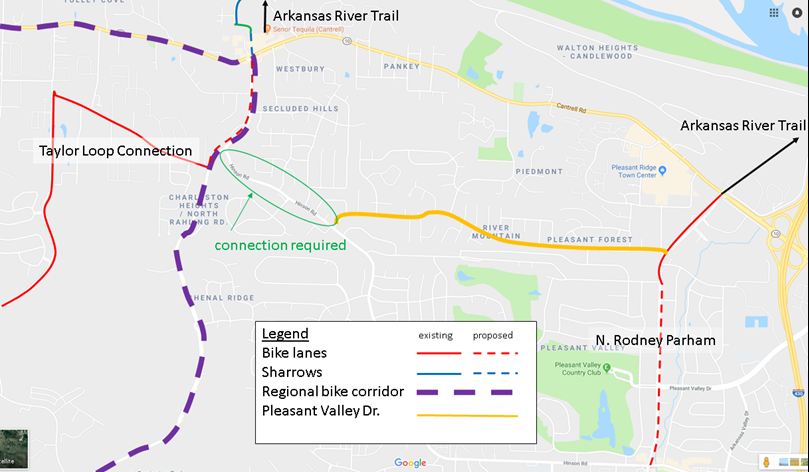 Figure 8.  A bike corridor on Pleasant Valley Dr. would improve the local and regional bike network.

These bike lanes, in combination with recently installed bike lanes on Pinnacle Valley, the connection through The Village at Ison Creek, the bike lanes on N. Rodney Parham, and the planned underpass at Cantrell create a foundation for a ~10 mile hill climber's recreational loop connected to the Arkansas River Trail Loop (moderate difficulty counter-clockwise, higher difficulty clockwise, Fig. 9).  Regular riders of the Arkansas River Trail 15 mile loop could add this to their ride to create a 25 mile loop. 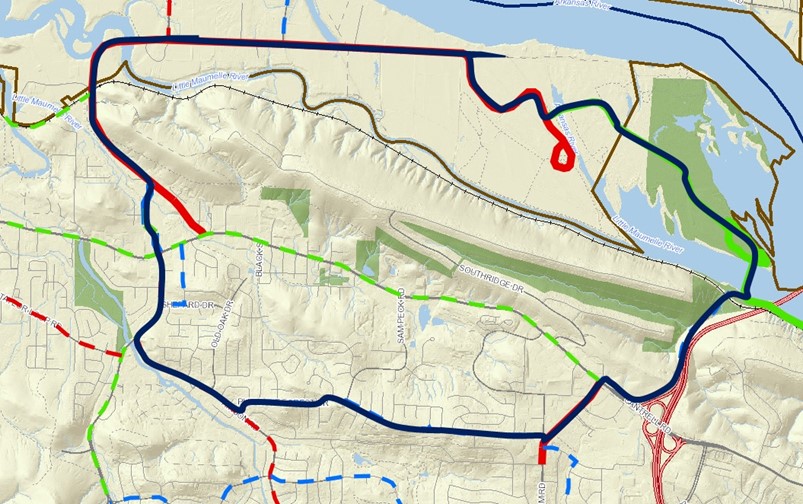 Figure 9.  Recent bike infrastructure could be connected by bike lanes on Pleasant Forest Dr. to create a recreational loop connected and complimentary to the Arkansas River Trail Loop.

Drivers don't want to be involved in a collision or to hurt anyone.  Sight lines are poor on Pleasant Forest Dr. because of the topography and the curves. Placing fog lanes (to slow vehicular speeds) and sharrows (to create a bicycle route, consistent with the Master Bike Plan) on Pleasant Forest will mix vehicular and bicycle traffic in the same lane (Fig. 10).  Poor sight lines and topography that makes vehicular and bicycle traffic speeds dramatically different at times could cause drivers to be not see a person driving a bike until they were very close.

Placing bicycle and vehicular traffic in separate spaces on the road will passively decrease the risk of a collision when a driver does not see a bike until they are very close.  Traffic calming will also reduce the risk and severity of collisions with residents, and people walking and biking as well. 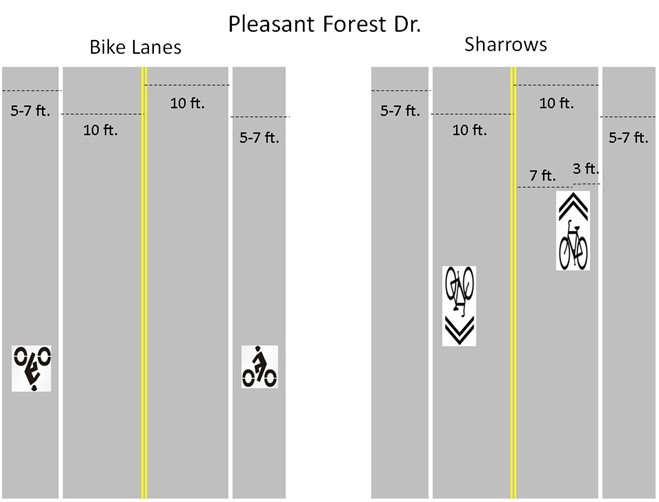 Figure 10.  Fog lanes and sharrows will require drivers to actively avoid collisions with people on bicycles when they approach.

Motorists can be frustrated when they are not able to safely pass someone on a bicycle.  This is particularly true when hills, like the ones on Pleasant Forest Dr., cause people on bikes to move much slower than vehicular traffic. Bike lanes would allow motorists to conveniently pass people driving bicycles (Fig. 10).  Sharrows would instruct people on bicycles to occupy the same lane of traffic as the automobile.  In addition to being more dangerous (see above), this also makes it more logistically challenging for the driver to pass the bicyclist.  Drivers are technically not allowed to cross the double yellow line (and in many areas of Pleasant Forest Dr., sight lines do not allow cars to safely cross the double yellow line even to pass a bike) and are legally required to give the person on the bike at least three feet of space when passing.  This can trap a car behind a bike, temporarily inconveniencing the motorist (Fig. 11). 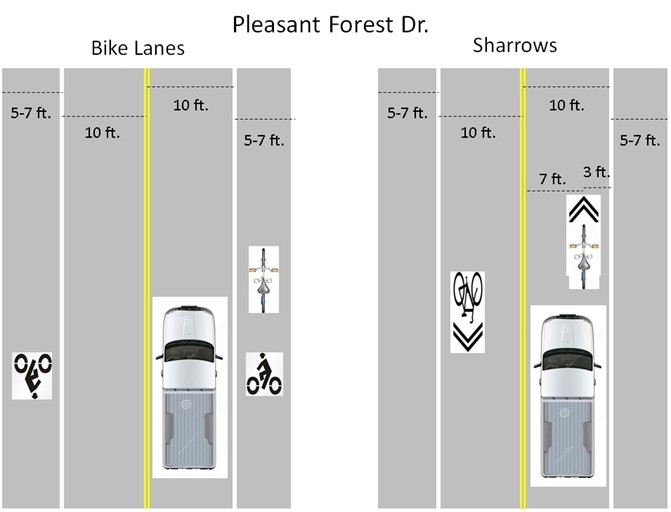 Figure 11.  Sharrows instruct people on bikes to ride in the vehicular lane (the arrow on the sharrow is where the bike should be).

As discussed at the top of the page, this page was originally generated to inform a discussion of what striping to include on the resurfaced Pleasant Forest in 2018.  This decision has been made; fog lanes were installed to narrow vehicular traffic lanes and reduce speeds while retaining street parking.  This page remains active as a resource for future street striping decisions.