Kavanaugh Blvd. already has sharrows.  Why go to the extra effort to change this street configuration?

FHWA’s Bikeway Selection Guide (2019) recommends a separated (physically protected) bike lane for Kavanaugh’s speed limit and traffic volume; sharrows do not meet design guidance (Fig. 1).  The City of Little Rock had an opportunity to discuss the Kavanaugh corridor, specifically, with FHWA professionals in a virtual workshop; they recommended separated bike lanes if possible, but certainly buffered bike lanes over sharrows.  The City of Little Rock's Bicycle and Pedestrian Coordinator, CLR's Active Transportation Advisory Committee, Strong Towns Little Rock, and Bicycle Advocacy of Central Arkansas all recommend protected bike lanes over sharrows for this corridor.  The City of Little Rock's Complete Streets Master Plan contractor, ALTA Planning + Design, recommends protected bike lanes over sharrows for this corridor and has identified this corridor as important for our bike network (to be clear, this is not a recreational network, but a network designed to make the bicycle a safe and viable transportation choice). 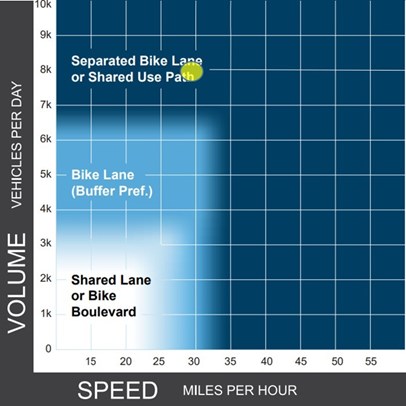 Why is there such consensus among professionals that the Kavanaugh corridor, specifically, requires strong separation between cars and bikes?  While traffic volume and speed point to separated bike lanes, the specific conditions and use of Kavanaugh makes separation even more important.

Sharrow chevrons (double arrows) show all road users where a bike belongs on the road width (Fig. 5).  This positioning does not allow a car to pass in the same lane (Fig. 2).  In Arkansas, cars cannot legally cross the double yellow line even to overtake someone on a bike and can become “trapped” behind a slower moving bike.  The high speed differential on can frustrate drivers and make the exposed rider anxious about erratic driver behavior.  The long climb from Markham to Oak exacerbates this speed differential and user conflict for traffic headed from Markham toward the Hillcrest Business District.

"The sharrows in Hillcrest and the Heights don’t offer appropriate delineation for anyone other than a hardcore cyclist." Rachel C.

In practice, to be polite or to calm potentially frustrated drivers attempting to pass her, a cyclist might do one of two things, each dangerous.  She may ride very close to the lane of parked cars.  This behavior risks injury from drivers opening their door (a common and dangerous collision known as “dooring”) and encourages drivers to attempt to overtake the cyclist without crossing the double yellow line, providing less than the legally-required three feet of space between car and bike.  Alternatively, she may weave into the parking lane (separated by a white line in Zone 1, Fig. 3).  However, regular vehicular traffic and parking lanes at ~15% capacity cause frequent conflicts for the rider, requiring her to weave into the parking lane to avoid traffic and out of the parking lane to avoid parked cars.  Unpredictable lateral bike movement and sightlines obscured by roadway curves and large parked cars make navigating Kavanaugh in this way stressful and dangerous.  For your reference, it is the legal responsibility of the person exiting a vehicle to prevent "dooring".

Is the person driving the bike too concerned about drivers' states of mind or convenience?  Possibly, but Little Rock residents who have spent any time bike commuting will tell you the various ways drivers in several-ton vehicles intimidate them (e.g. a comment on BikePed Little Rock in response to the Kavanaugh August 26th public meeting).  Several people are killed in Arkansas every year by motorists while driving a bike and Little Rock safety statistics are concerning.  Given this, it's no wonder that the top disincentives to commuting by bike are fear of being struck by a car (Tables 1 and 2). 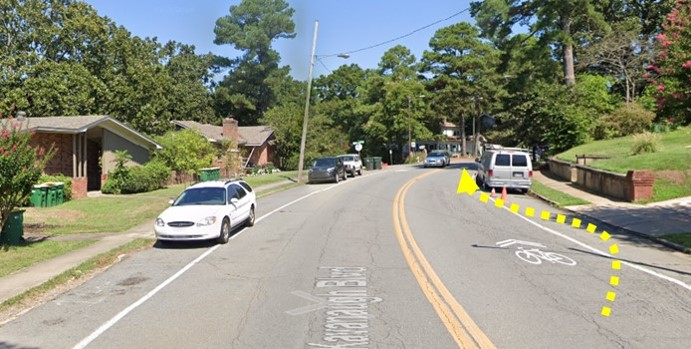 Figure 2.  Google streetview showing the lateral movement of a nervous person on a bicycle.