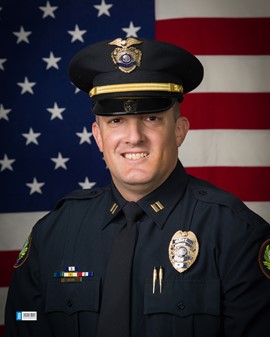 The Special Operations Division is under the command of Captain Heath Helton, who reports to the Assistant Chief of Police - Field Services Bureau.

Throughout his career, Captain Helton has been assigned to various units which include Training, Patrol, Financial Crimes, S.W.A.T. Team, Special Response Unit, Helicopter Unit, and the River Market Unit. As a supervisor he worked in the Patrol Division, served as the Staff Adjutant for the Northwest and Special Operations Divisions, River Market Unit, Recruit Training Unit and the S.W.A. T. Unit. Since being promoted to Captain in 2015, he has commanded the Training Division, Northwest Patrol Division, and his current assignment.

Captain Helton has a Bachelor of Science degree in Leadership from Central Baptist College and will obtain a Master Degree in Criminal Justice from Liberty University in early 2020. He is a 2017 graduate of the Federal Bureau of Investigations (F.B.I.) National Academy-Session 268, the Federal Bureau of Investigations (F.B.I.) and Criminal Justice Institute-Arkansas Leader Session XXIV as well as the School of Law Enforcement Supervision. Captain Helton also holds a law enforcement Senior Certificate and Professional Police Instructor Certification from the Arkansas Commission on Law Enforcement Standards and Training.