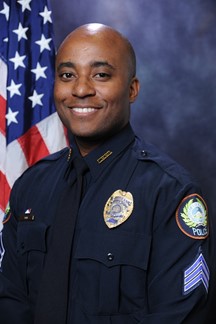 The Public Affairs Section is under the command of Lieutenant Michael Ford Jr., who reports to the Assistant Chief of Police - Investigative Bureau.

Lt. Ford is an 18 year veteran of the Little Rock Police Department. He started his career in 2000 as a Police Cadet. In 2003, he was promoted to a Patrolman in the Downtown Patrol Division.  While on the Little Rock Police Department, he has worked in Property Crimes, Special Operations, and Uniform Patrol. He was assigned as the Commander of the Public Affairs Section in October of 2017. Ford achieved the rank of Sergeant in January 2014; promoted to Lieutenant in June 2016 where he commanded the Northwest Patrol Midnight Watch and later commanded the Property Crimes Division.

Lt. Ford is a graduate of North Little Rock High School. He earned a Bachelor of Arts Degree in Criminal Justice from the University of Arkansas at Little Rock. Lt. Ford has a wife, son, and daughter.

The Office of Public Affairs is located in the Headquarters Building located at 700 West Markham Street, Little Rock, Arkansas, 72201. The Public Affairs Lieutenant is responsible for the release of police information and the response to Freedom of Information (F.O.I.) Act requests.  In all matters of interest to the public, the Little Rock Police Department will maintain open communications emphasizing a balance between the citizen's right to know and the constitutional rights of the accused.

The Public Affairs Office is open Monday-Friday from 8:30 AM until 4:30 PM.  During weekends and after hours, the Public Affairs Lieutenant is on-call for Police emergencies once notified of a critical incident.  Critical incidents are as follows: murders, attempted murders or shootings of more than one person in a single incident, Police-related deadly force incidents, incidents in which any City employee is injured or arrested, fatality accidents or any incident which constitutes a civil disturbance or disaster. The Public Affairs Office is on-call for police emergencies. During weekends and after-hours, the Public Affairs Office will not have information regarding routine arrests, crimes not resulting in serious or fatal injuries, or non-fatality vehicle accidents.  In most cases, routine arrests and other Police-related incident reports are available eight (8) hours after the report is taken and can be obtained from the Desk officer located at 700 West Markham Street, Little Rock, Arkansas, 72201.

The Arkansas Freedom of Information Act (FOIA) requires that all public records not subject to an exemption from the FOIA be made available immediately upon request, unless the records are in active use or in storage.  FOIA requests can be made by contacting the Public Affairs Office at (501) 371-4678 or (501) 918-5330; or by fax at (501) 371-4892.  For a FOIA request form click here.