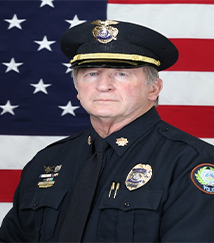 Major Max Spriggs has been a member of the Little Rock Police Department for forty-four (44) years. He began his career in law enforcement in 1977 as a Patrolman, later joining the Special Response Unit and the Special Weapons and Tactics Team. In 1984, he was promoted to Detective and served in the Property Crimes and Homicide Divisions. Upon promotion to Sergeant in 1989, he oversaw the daily operations of the Detention Facility and later led a rotating squad in the Southwest Patrol Division. He promoted to Lieutenant as a Patrol Shift Supervisor in 1991, oversaw the 6th Judicial Narcotics Task Force until 1993, and directed the operations of the Vice Squad and the Intelligence Unit until 2004.

On October 17, 2020, Major Max Spriggs, along with all Captains with the Little Rock Police Department, had his rank administratively changed from Captain to Major.

Major Max Spriggs holds a Bachelor of Arts degree in Criminal Justice and is a graduate of the FBI National Academy and the Arkansas School of Law Enforcement Supervision. He as Senior and Police Instructor certifications from the State of Arkansas, and has received extensive training from more than a dozen organizations, including the Federal Bureau of Investigations, the U. S. Secret Service, the Department of Justice, and the Central Intelligence Agency. Major Spriggs is a member of numerous professional associations and has chaired several committees which support community awareness and education. He is committed to promoting mutual trust with the citizens of Little Rock by encouraging communication and resolving issues together.

The Narcotics Unit is responsible for investigating all criminal offenses relating to or arising from the use of or trafficking of controlled substances. A vital role of the Narcotics Unit is to maintain a close working relationship with federal, state and local drug enforcement agencies.

The Vice Unit is responsible for the investigation of criminal offenses relating to or arising from acts of prostitution, gambling, pornography and liquor violations.

The GCIU mission is to identify and target individuals who carry and use illegal guns in an effort to reduce or prevent gun crimes and the associated violence through the development and production of time sensitive actionable intelligence.  They are tasked with assisting state and federal partners in their successful prosecution efforts of individuals involved in or associated with gun crimes or who are committing acts of violence.