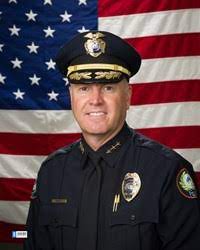 As Assistant Chief of Police, he serves as the Investigative Bureau Commander.