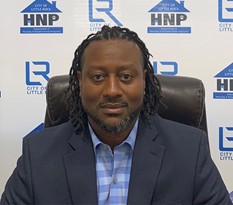 He holds several professional licenses and certifications with over twenty-four (24) years of experience as a Real Estate Appraiser, General Contractor, and Real Estate Broker. Some of his certifications include; Housing Development Finance Professional from The National Development Council, CDBG Basics & Advance Training Certification for Practitioners, Housing Production Manager Certification, Risk Management in Construction & Rehab, Project Management for Construction & Rehab – NeighborWorks. Design & Construction (Arkansas Fair Housing Commission). He is also a Real Estate Developer and has developed a 34 +/- Acre tract of land into a residential subdivision with commercial frontage. He is a product of Grambling State University and has a Bachelor of Science Degree in Business. While at Grambling State University, he was Captain of the Men’s Basketball team, selected to the Historically Black College University (HBCU) All American Men’s Basketball team and awarded several academic accolades while at the Grambling.